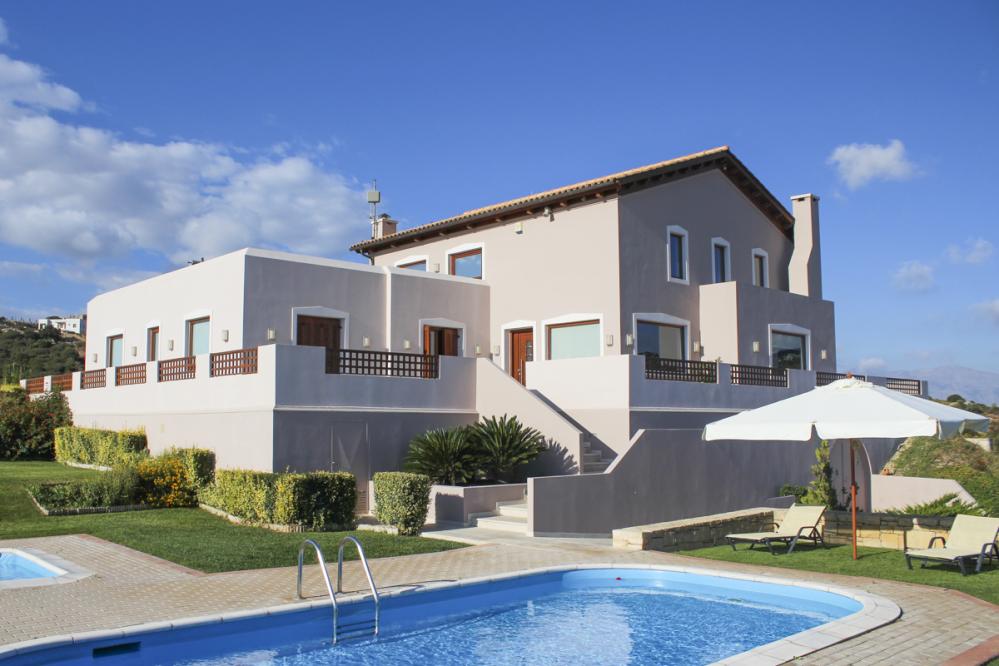 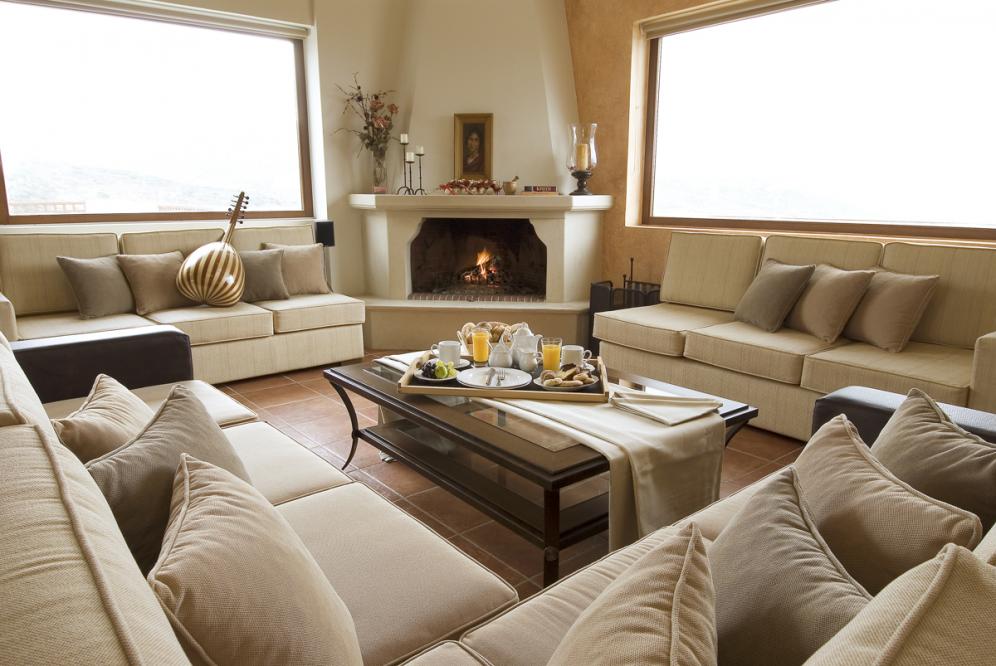 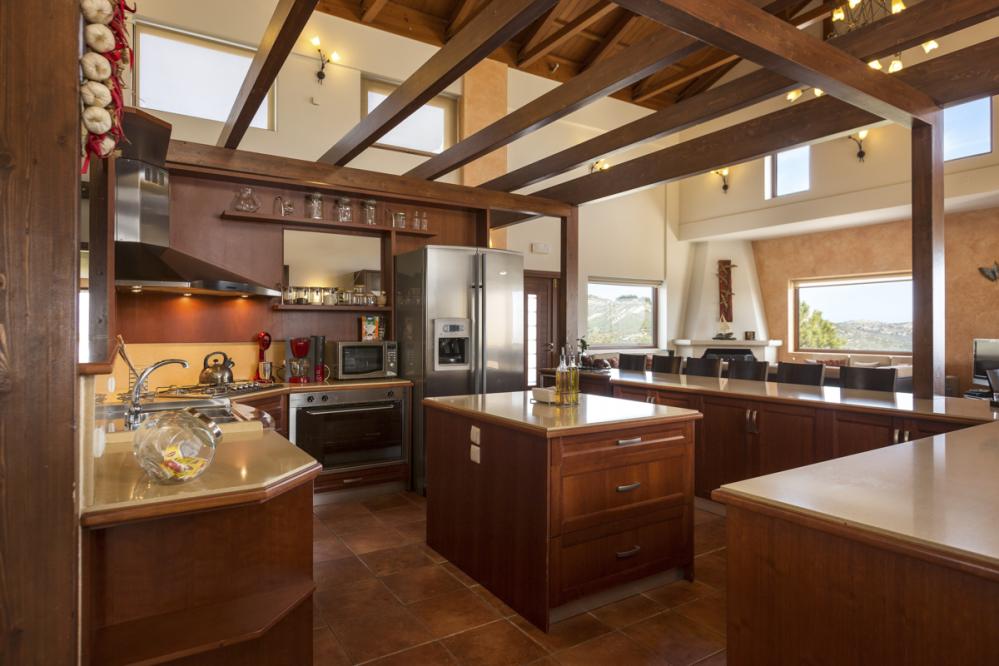 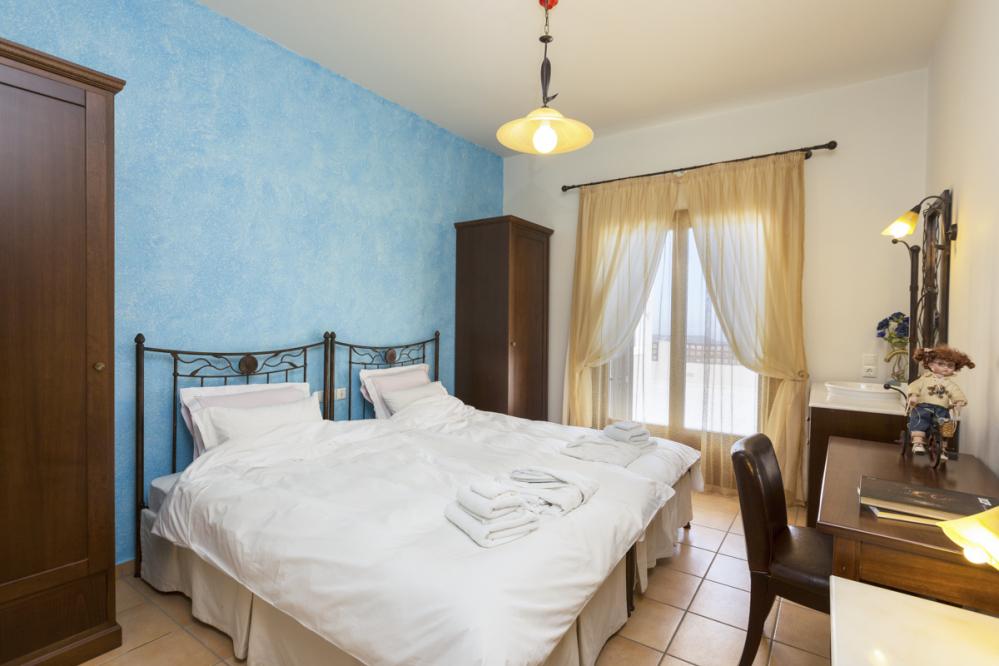 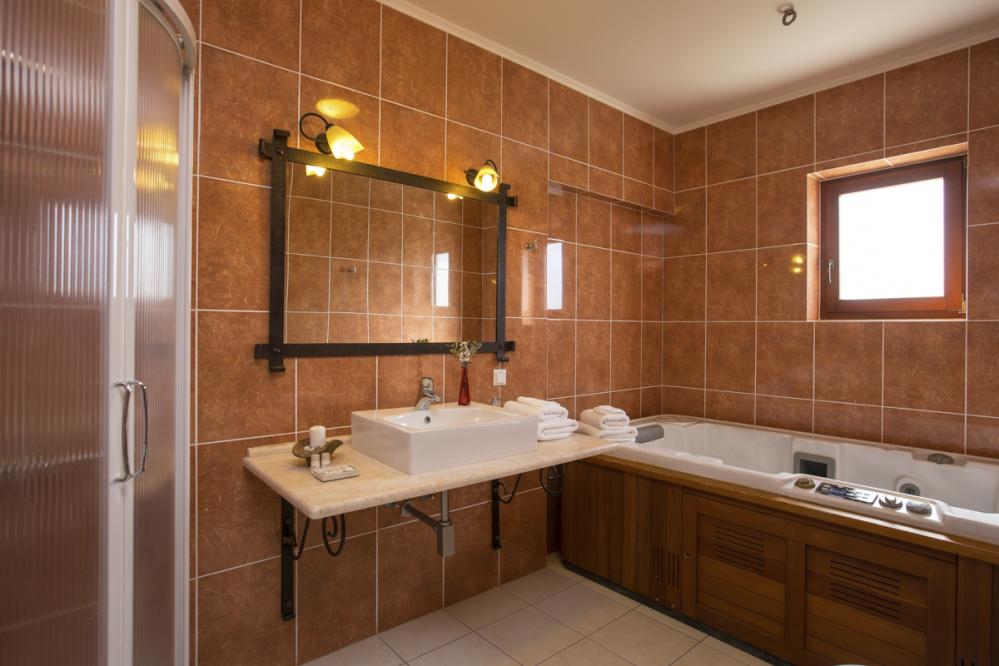 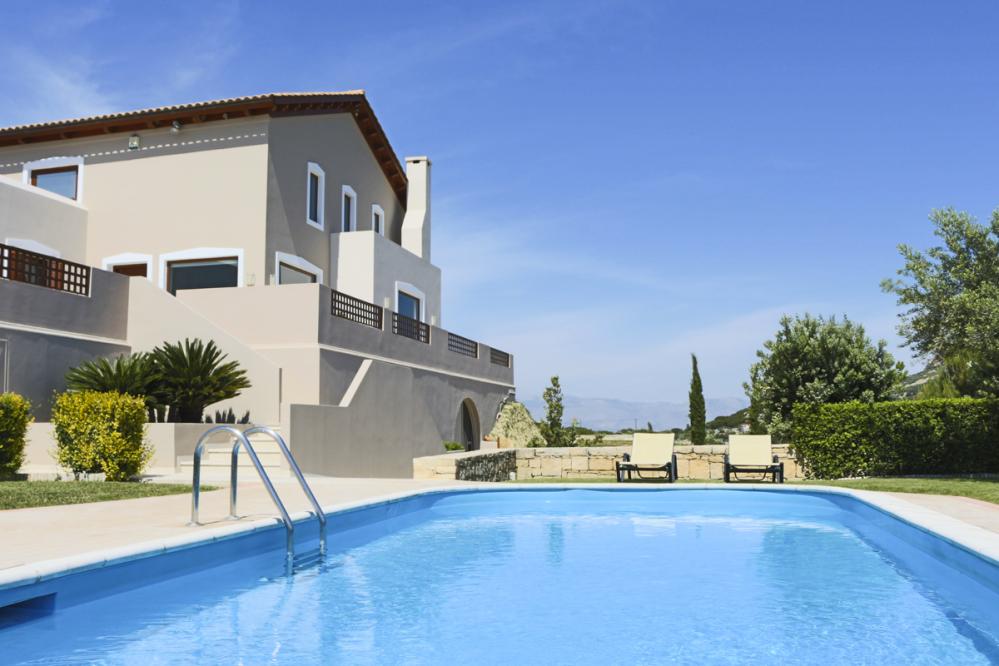 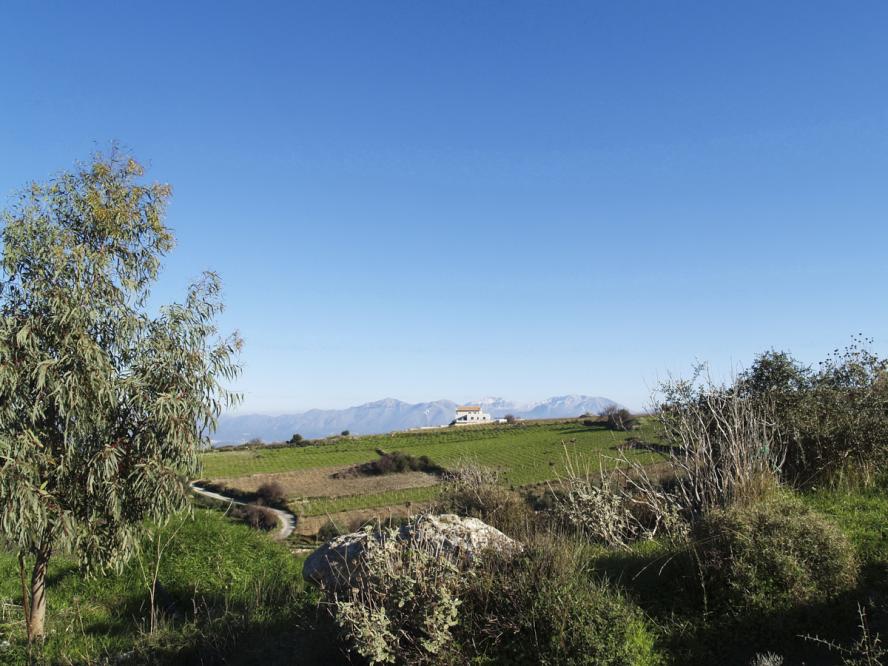 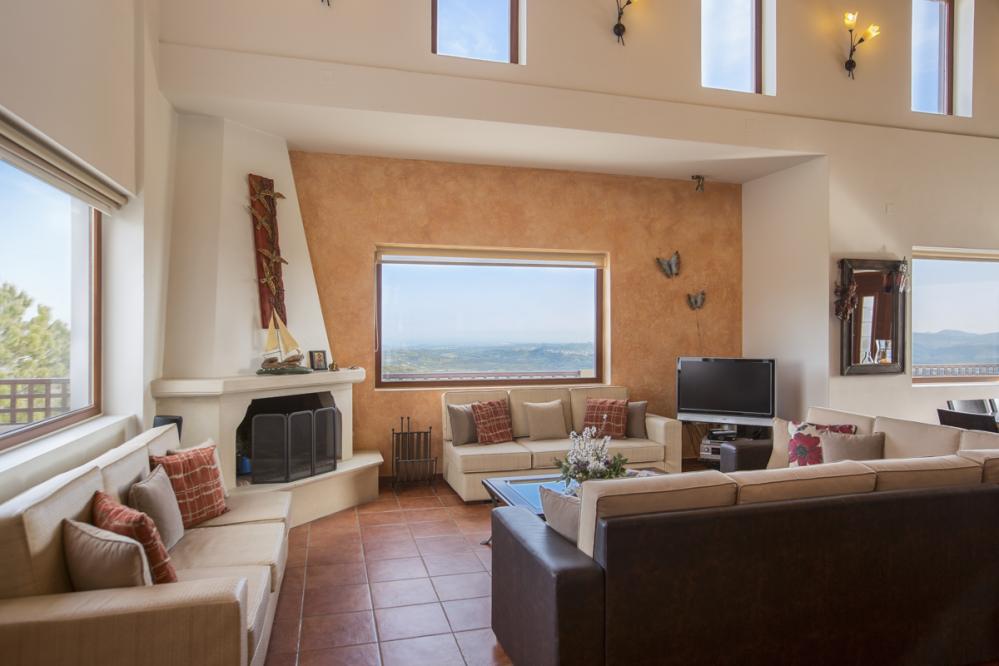 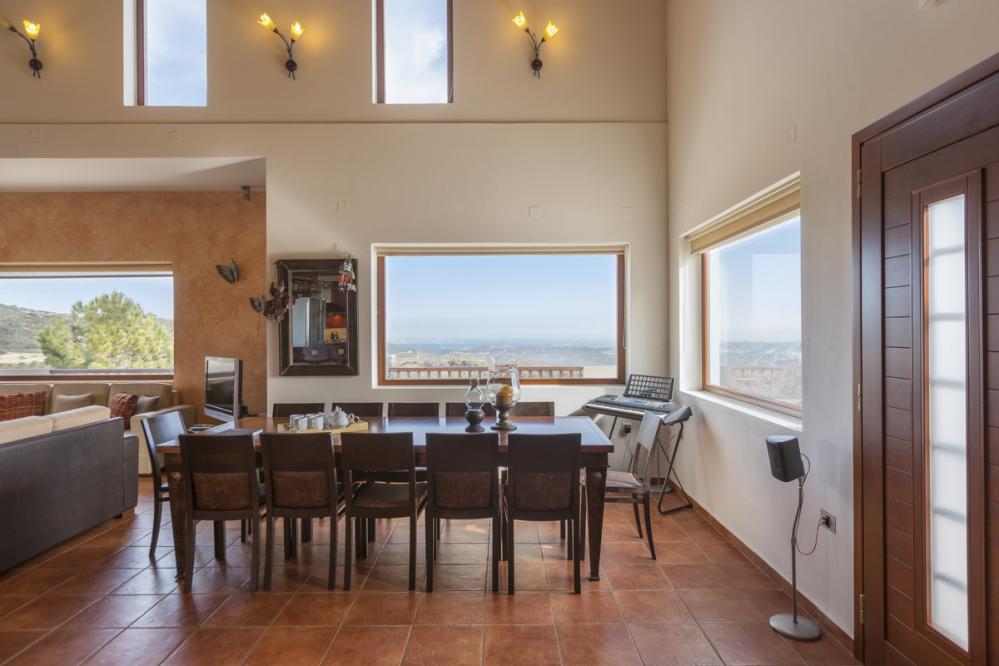 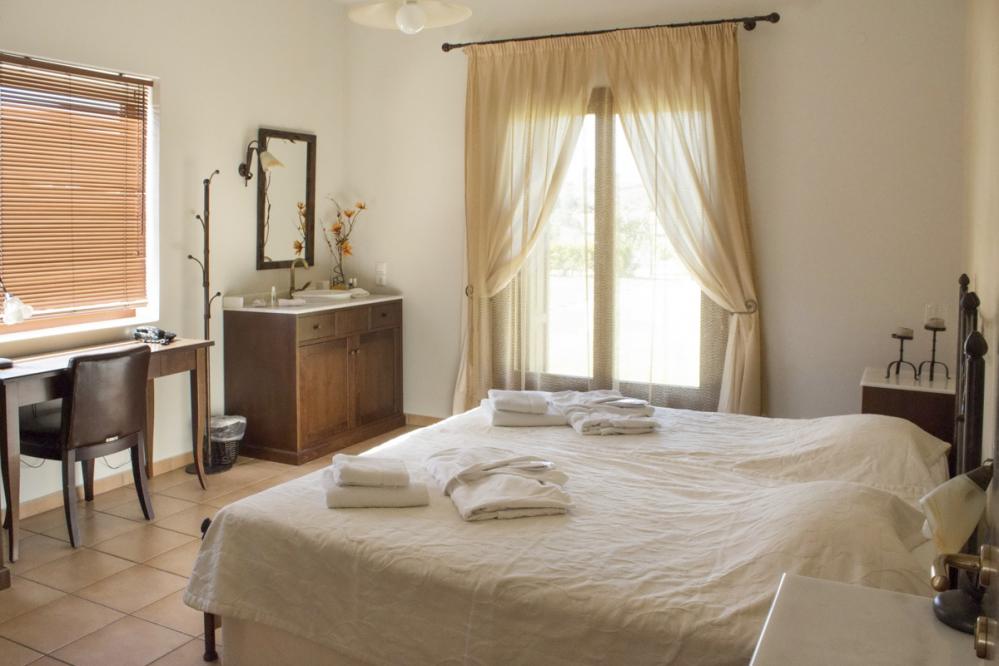 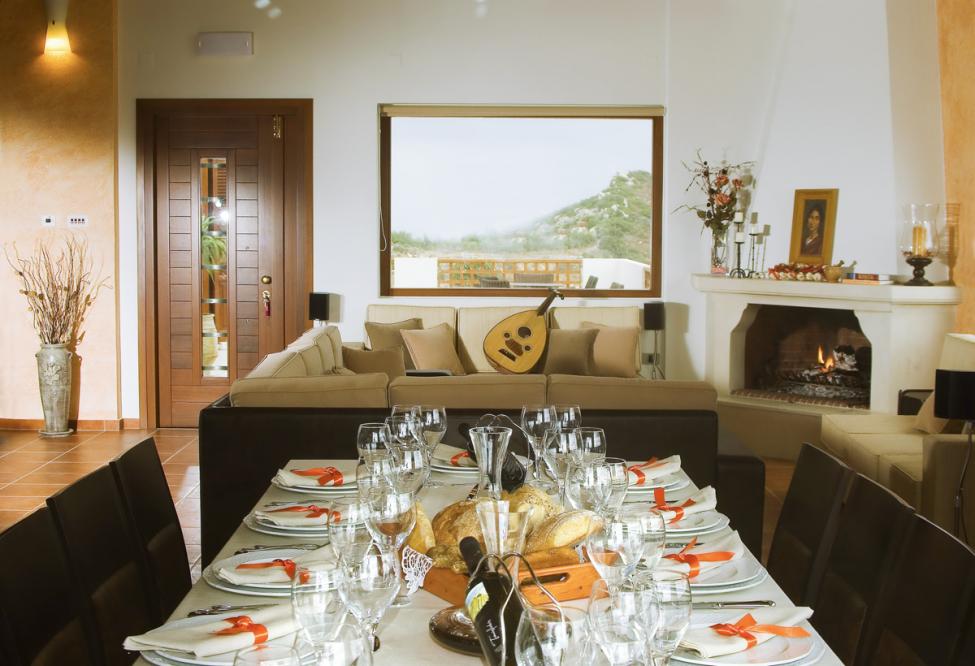 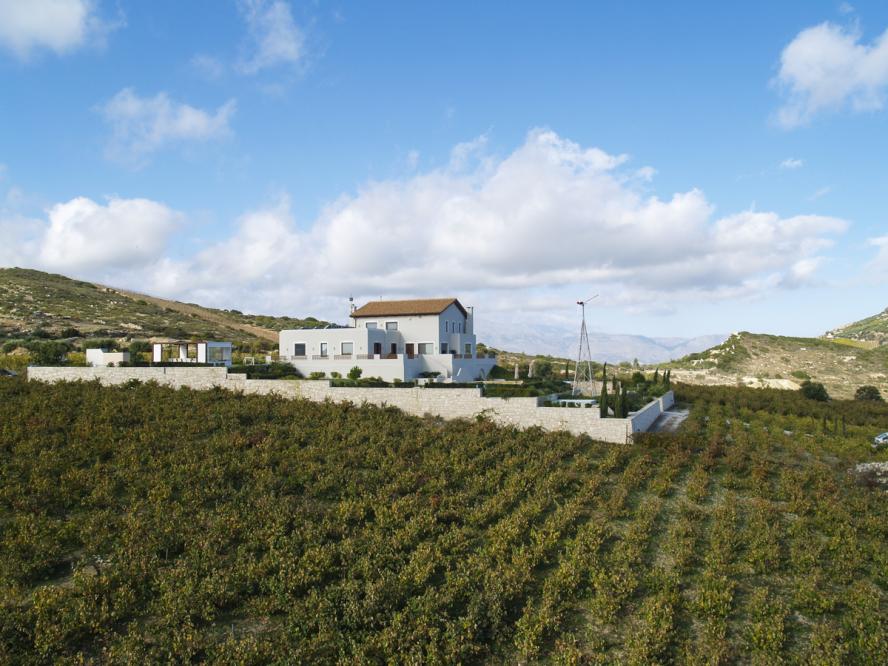 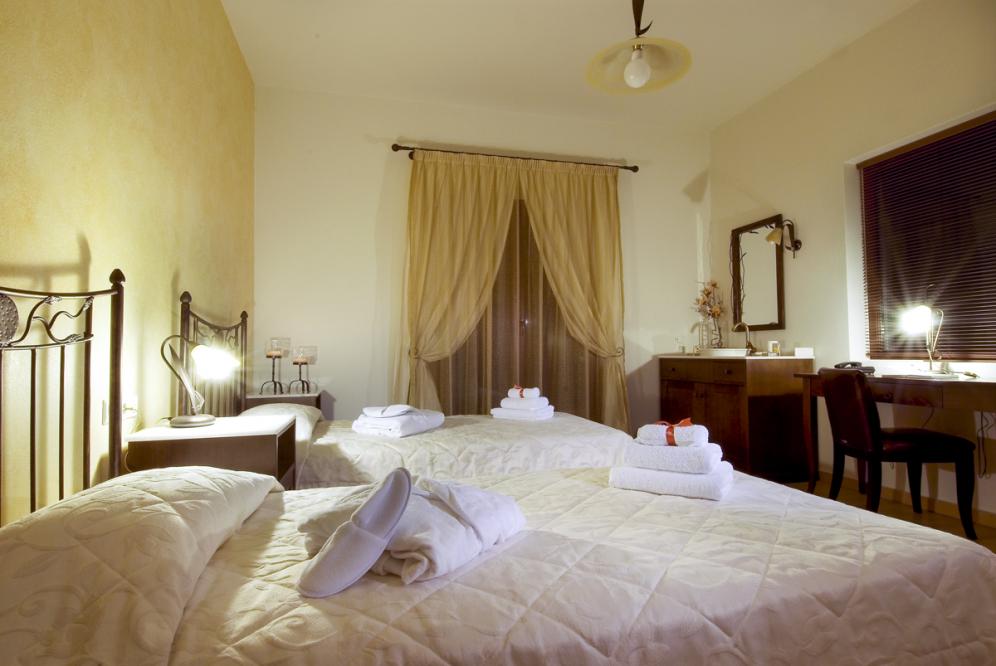 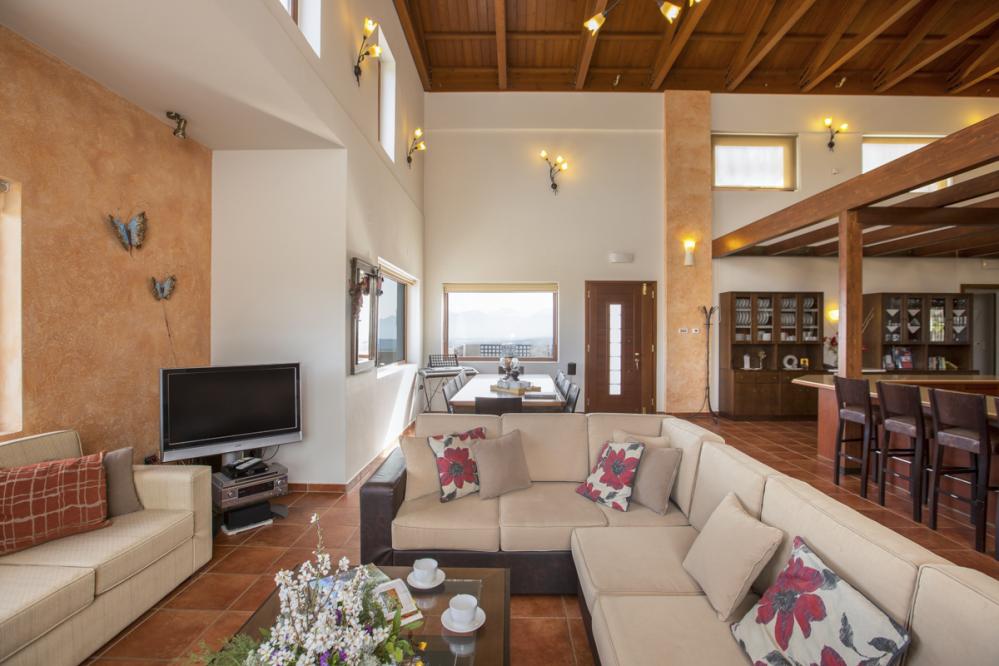 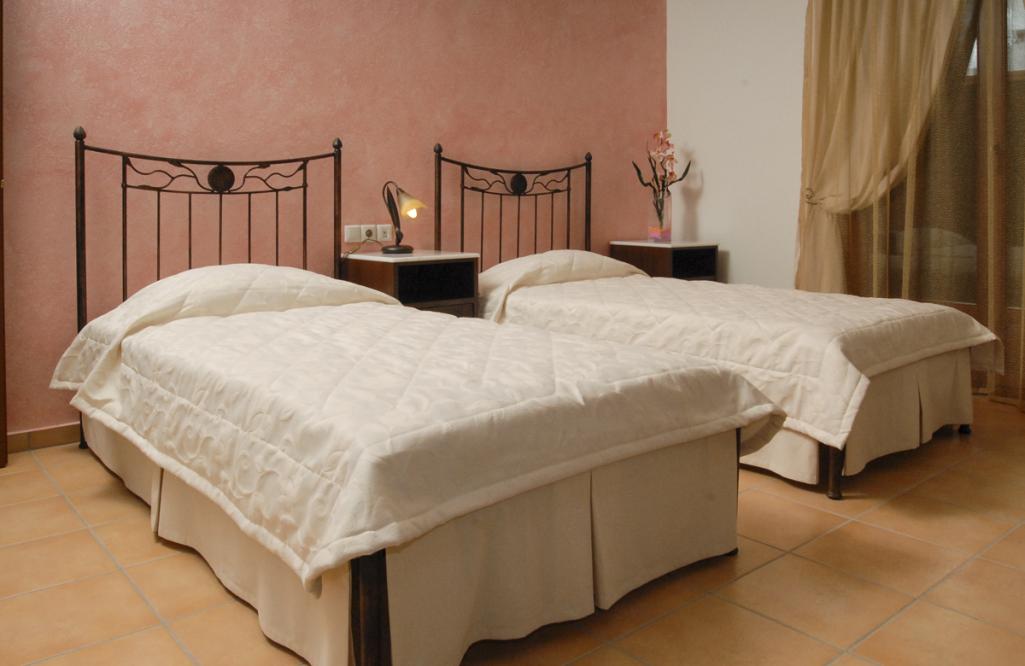 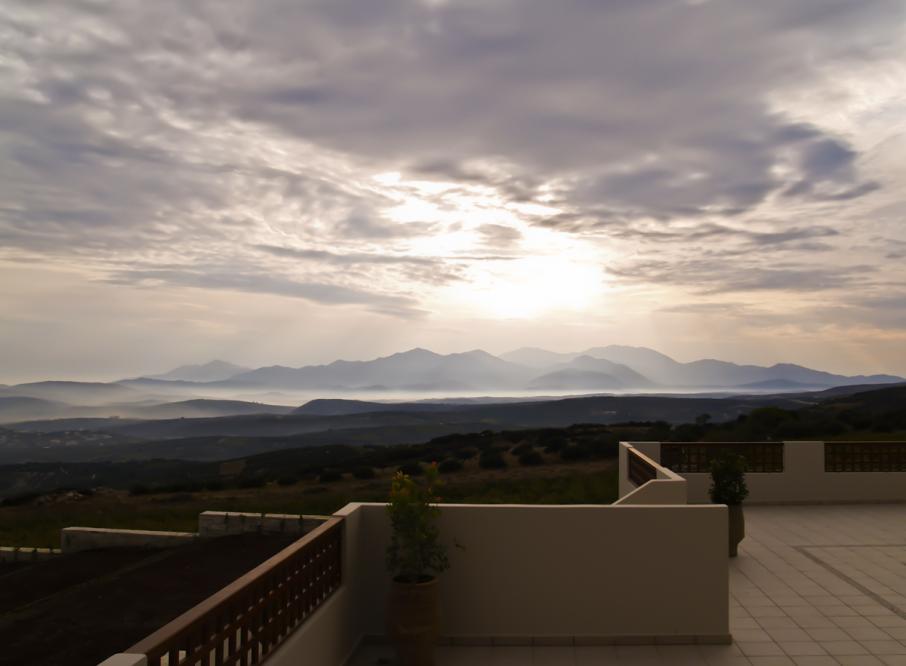 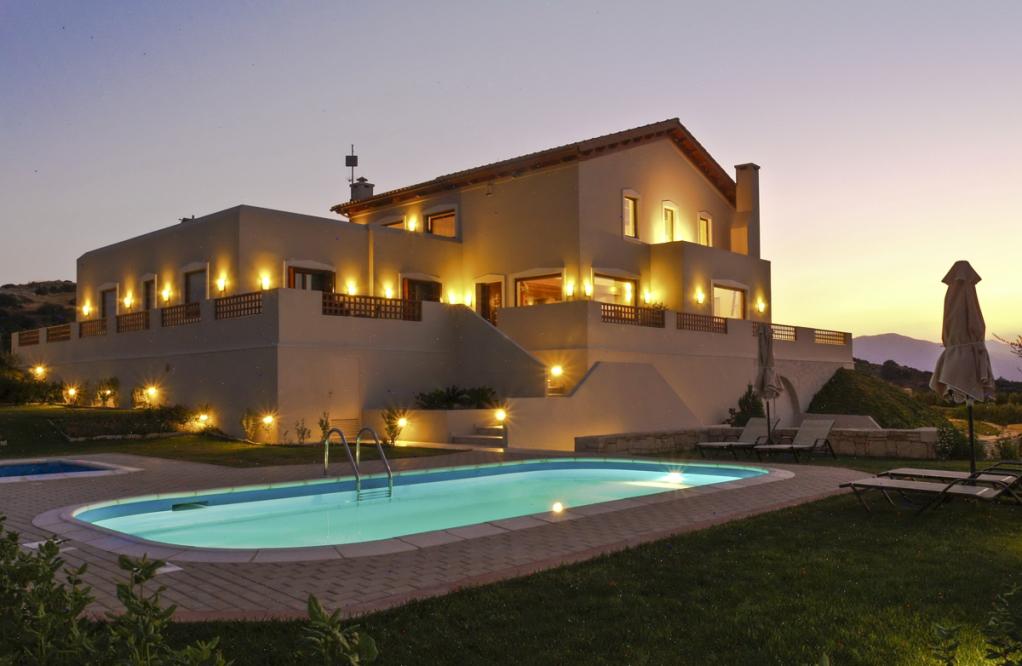 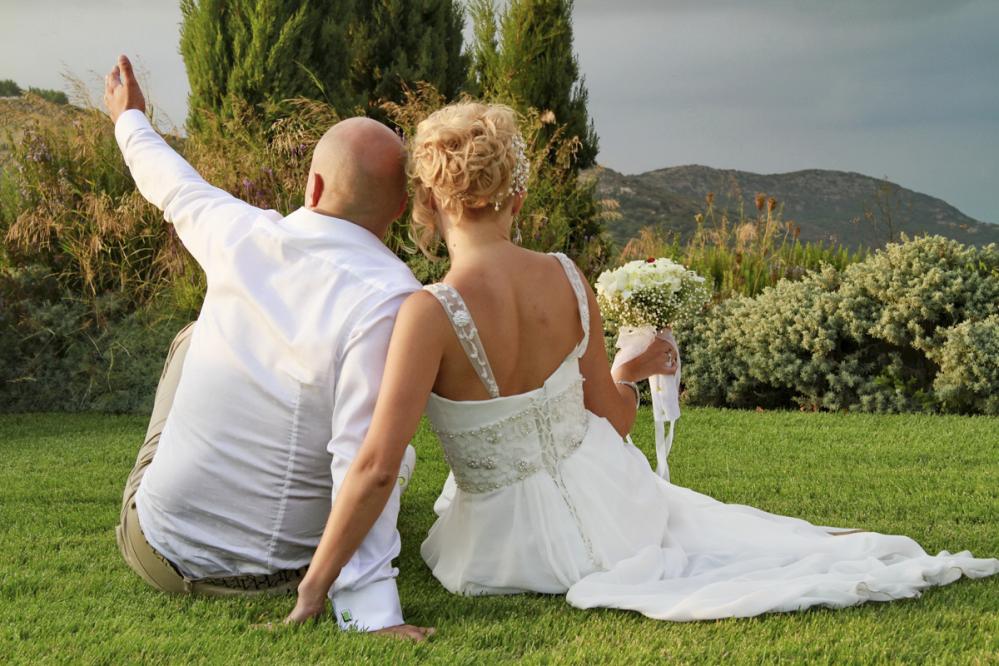 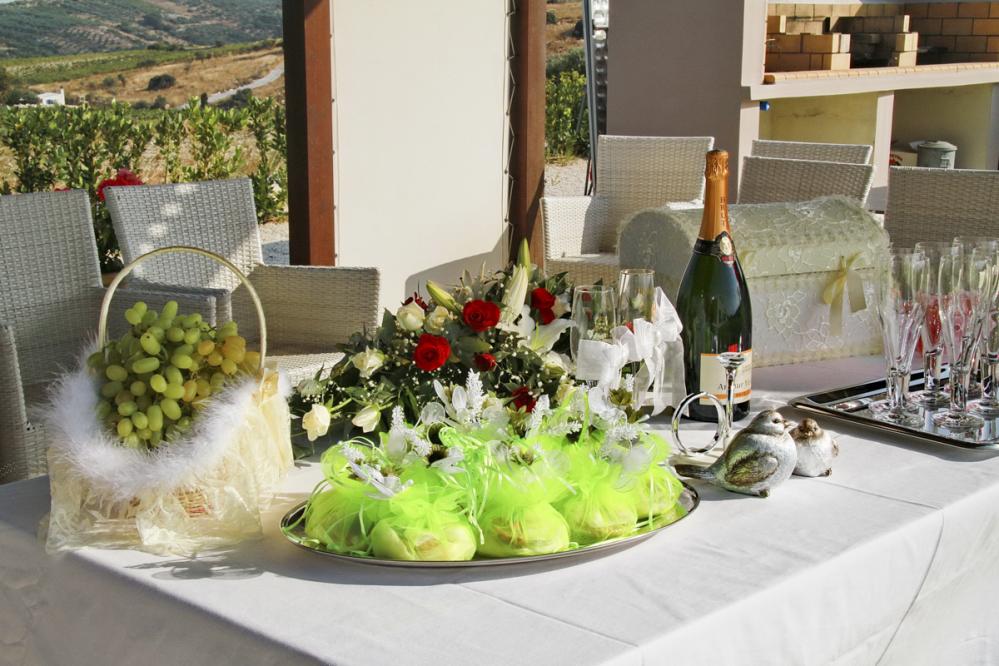 Six-bedroomed Villa Giannis is a beautiful traditional Cretan villa, sitting pretty on the hillside and offering the most amazing views of the port city Herakli...

Six-bedroomed Villa Giannis is a beautiful traditional Cretan villa, sitting pretty on the hillside and offering the most amazing views of the port city Heraklion and the Cretan Sea. Surrounded by trees, vineyards and a large garden, the peaceful and tranquil environment, as well as the privacy offered and spacious design, makes this villa an ideal holiday home for families, friends and couples alike.

The extensive landscaped grounds set the tone of this luxurious villa. With a private entrance leading up to the stone-walled property and grassy spots dotted with plants and shrubs, there’s plenty of places for children to play and you to unwind with your favourite holiday read. There are also two swimming pools – including one shallower pool for kids – a football and volleyball net and several loungers for some family fun or well-deserved R&R while soaking up the warm Mediterranean sun.

For romantic evenings, you can cook up a storm on the BBQ and then dine al fresco on the covered outdoor table and chairs, while small lights illuminate the property into the night. Inside, the luxury features continue with a modern fully-equipped kitchen and comfortable living space with a 52-inch flat-screen TV and cushioned sofas. In the colder months, you can make use of the heated under flooring and charming working fireplace. There are also tubs with jets in two of the four bathrooms for a serene spa-like feel. The villa sleeps up to twelve across its six stylish bedrooms.

The location of Villa Giannis is also perfect for exploring the beauties of Crete. You can take long walks through the vineyards and hills, or head to Houdetsi village with restaurants, cafes and small shops. A hiking trail takes you from Houdetsi to the neighbouring village Agios Vasilios, passing by a small gorge and the ancient monastery of Panagia Spiliotissa, part of which is built into a rock.

- Use of Spa at extra cost

Villa Giannis is in Houdetsi, a beautiful village about 23km south of the city of Heraklion, Crete. ...

Villa Giannis is in Houdetsi, a beautiful village about 23km south of the city of Heraklion, Crete. It’s a peaceful spot that’s known for its wine with olive trees and vineyards and traditional Cretan music. Well worth a visit are the water fountain in the village centre and the folklore museum of music with traditional instruments from all over the world. There’s also a gorge leading to the Sacred Monastery of the Madonna nearby – magical natural scenery full of tall trees and plenty of running water.

For history lovers, if you drive 12km south-west of Houdetsi, you’ll reach the Monastery of Saint George, built around 1600. There’s also the impressive Monastery of Agarathos, 14km east which is considered one of the oldest monasteries in Crete or the castle of Nikiforos Fokas, 14km northwest.
In Heraklion itself, the capital of Crete, there’s plenty of things to see and do.

The Palace of Knossos, just outside the city, is a vast archaeological site dating back thousands of years to the Minoan civilization and includes frescoes and baths. Guarding the city’s Venetian port is the 16th-century Koules fortress, and there’s the Heraklion Archaeological Museum has an extensive collection of Minoan art. Heraklion isn’t all about out ancient sites though with top-notch restaurants serving Cretan cuisine, boutique shops and a lively nightlife. It’s also home to one of the richest markets in the Mediterranean where you can get traditional Greek products like olive oil, honey and herbs.

Heraklion’s bragging rights also continue with its serene beaches. The stretches of sand in this central part of Crete’s north coast range from the lively hangouts in Malia to the rugged bays of the deserted island, Dia. You can swim, snorkel, take part in water sports like sea kayaking and scuba diving or jump on a boat trip. Moreover, a modern golf course both for beginners and advanced players is not far away from the city of Heraklion, in the area of Hersonissos.

With extensive grounds including a football and volleyball pitch, and a fantastic rural location wit...

With extensive grounds including a football and volleyball pitch, and a fantastic rural location with beautiful walking routes, Villa Giannis, the perfect villa for families with children.

One of the key advantages of this beautiful area in Crete too is that it offers numerous options for keeping children entertained, from calm swimming beaches to exciting ancient sites. Kids young and old can learn about the history of the glorious Minoan civilisation in the Palace of Knossos, just outside of Heraklion. If you have a smartphone, you can download the mobile app Kids Love Knossos, a series of audio stories about Knossos so they can listen while you’re there.

There are also plenty of opportunities to take part in water sports, or you can jump on a boat to explore the rugged coastline. For more family-friendly fun, there’s an aquarium a 15-minute’ drive west of Heraklion, alongside a labyrinth park with a maze to explore that’s 20 minutes away.

Ask a question about Villa Giannis