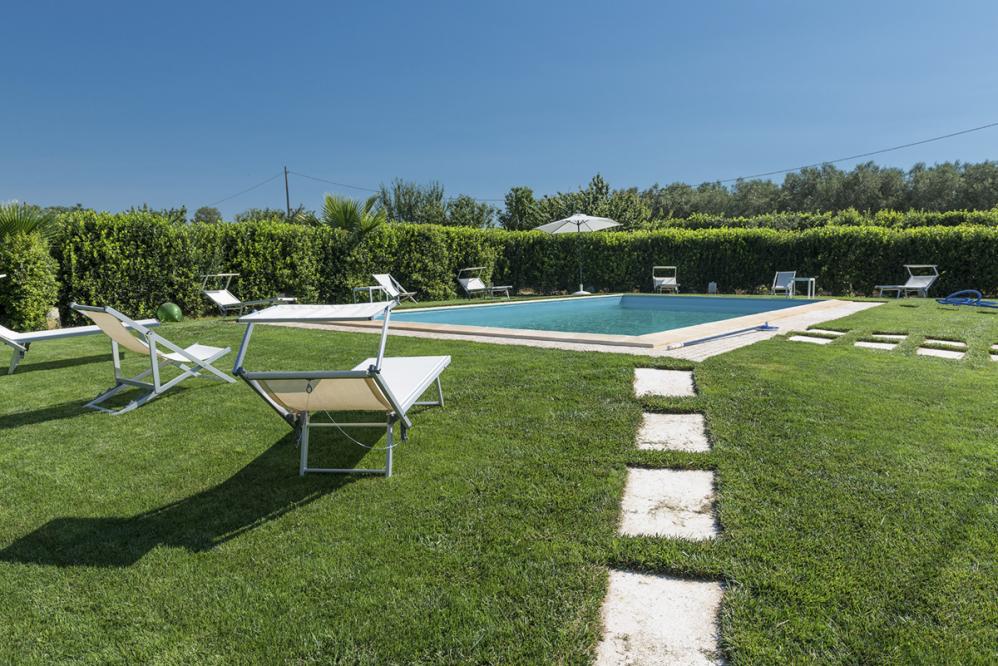 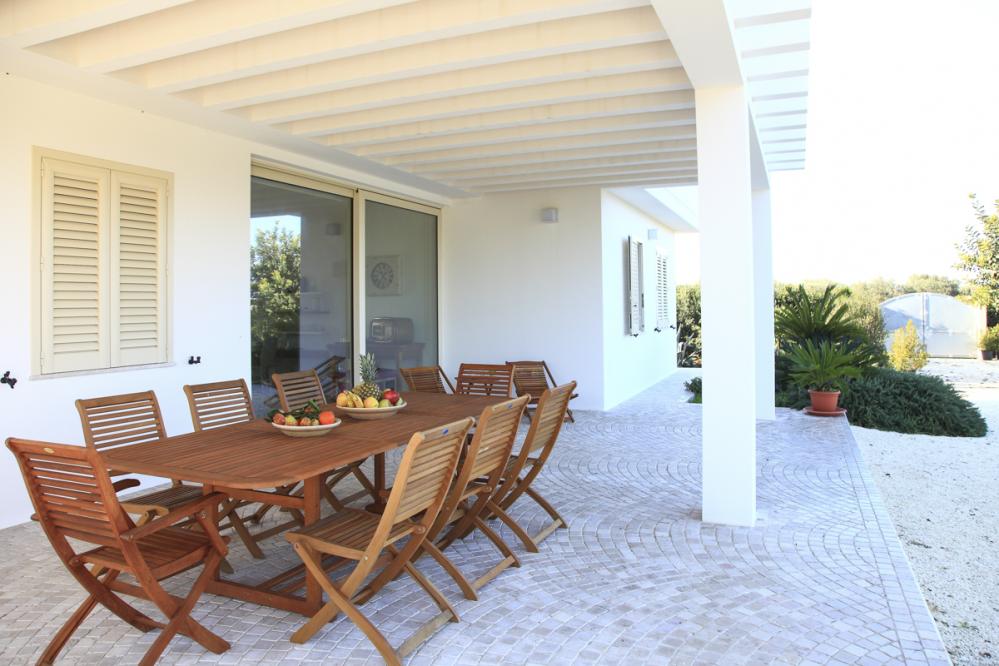 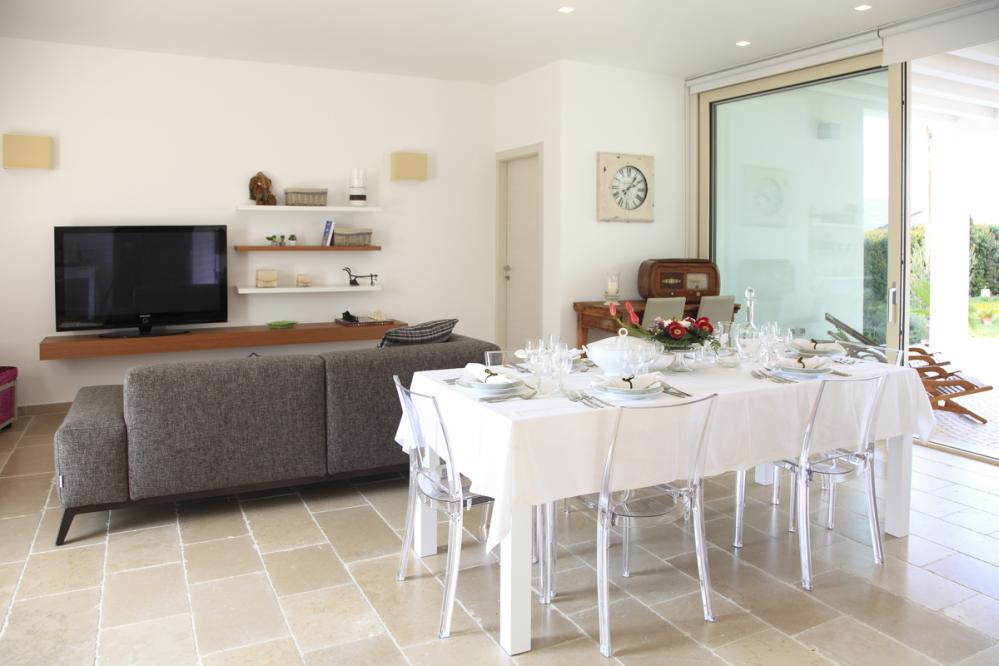 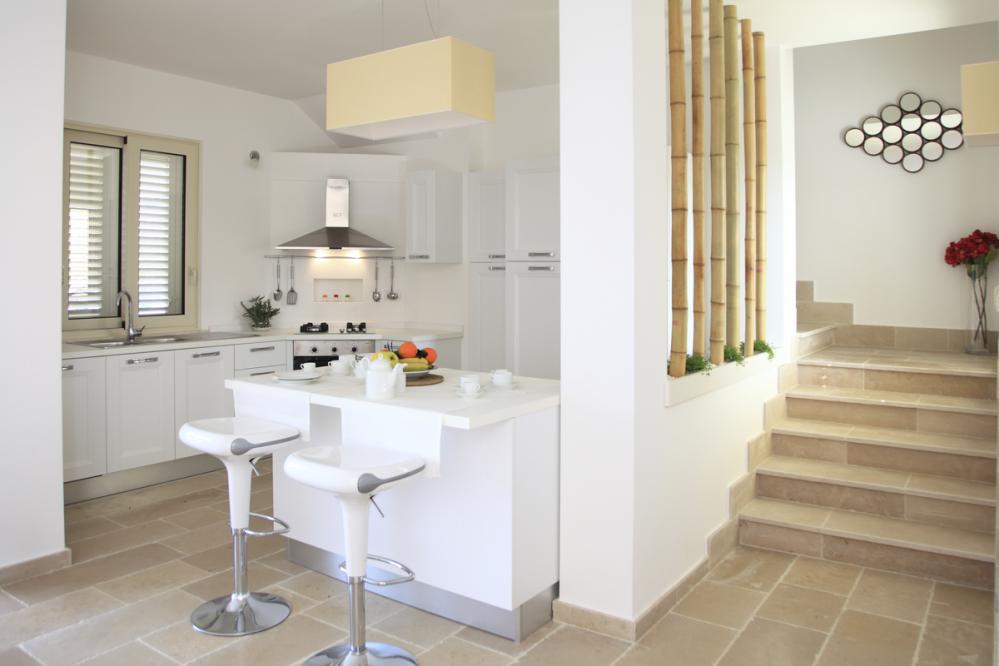 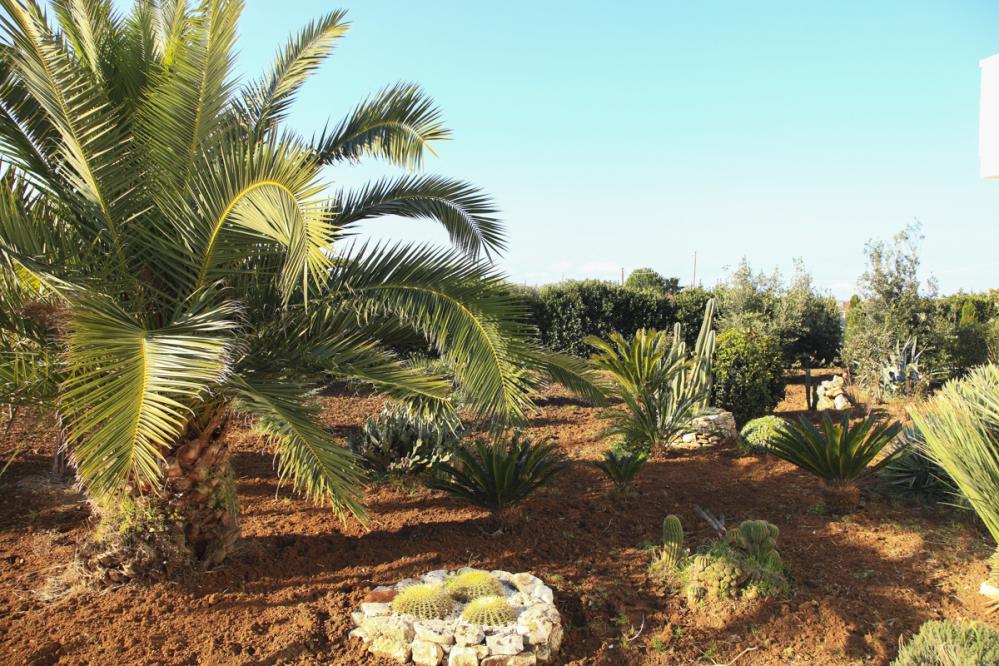 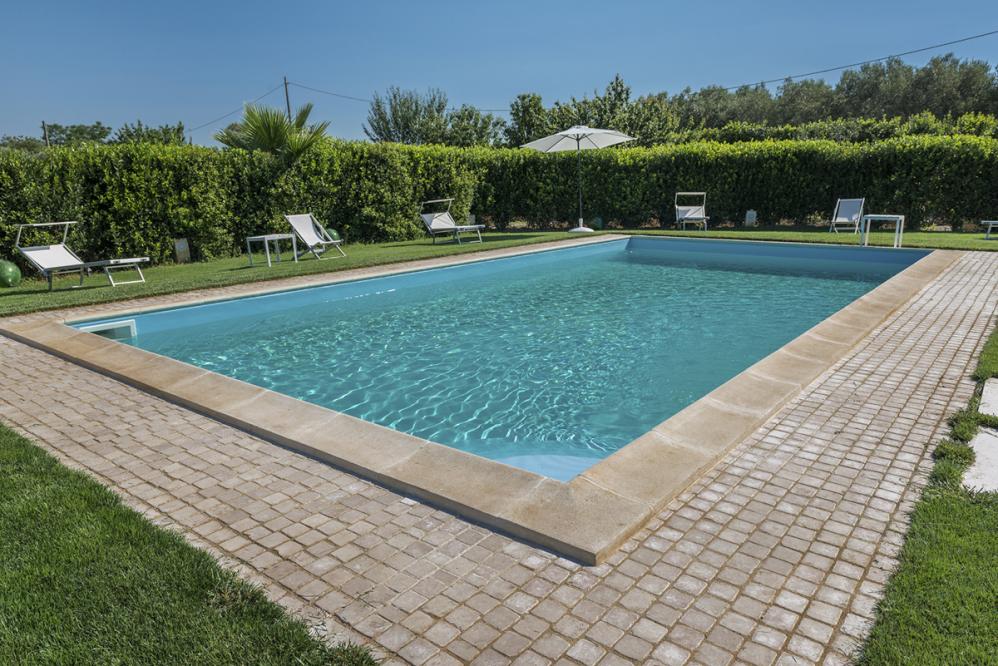 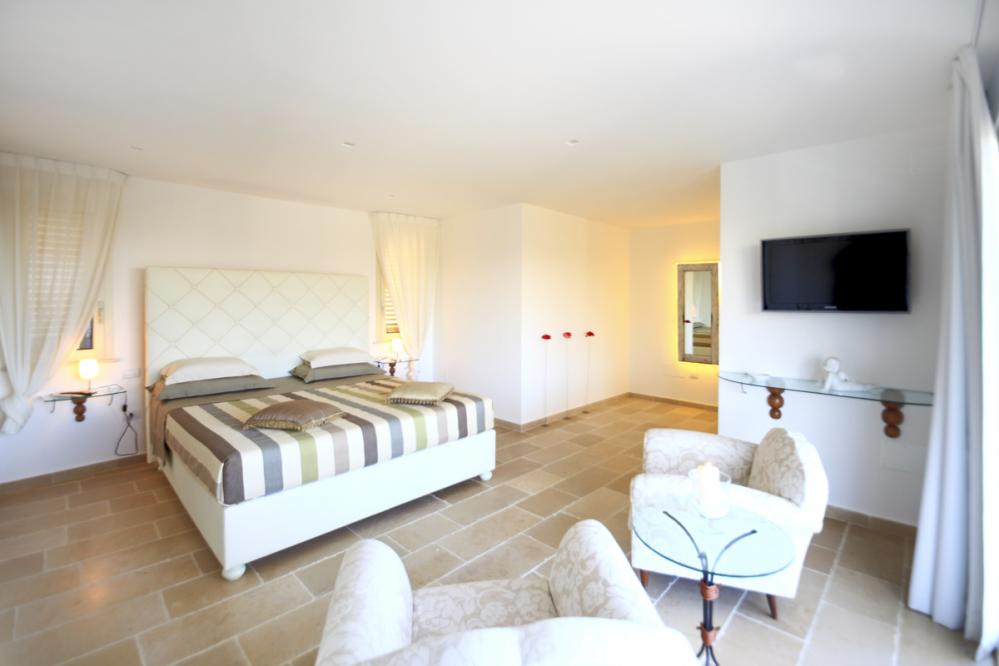 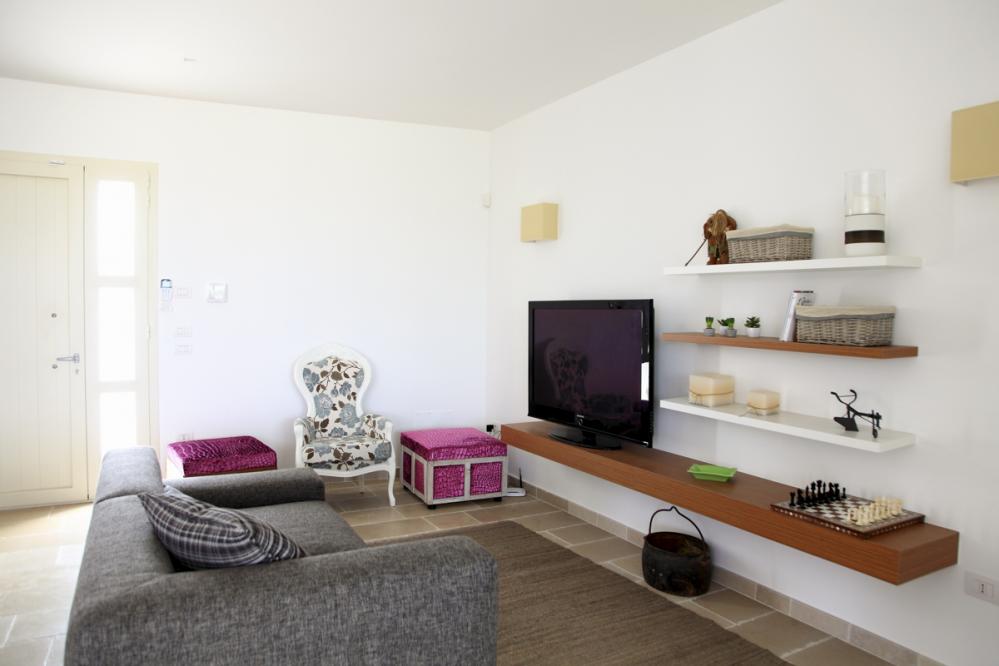 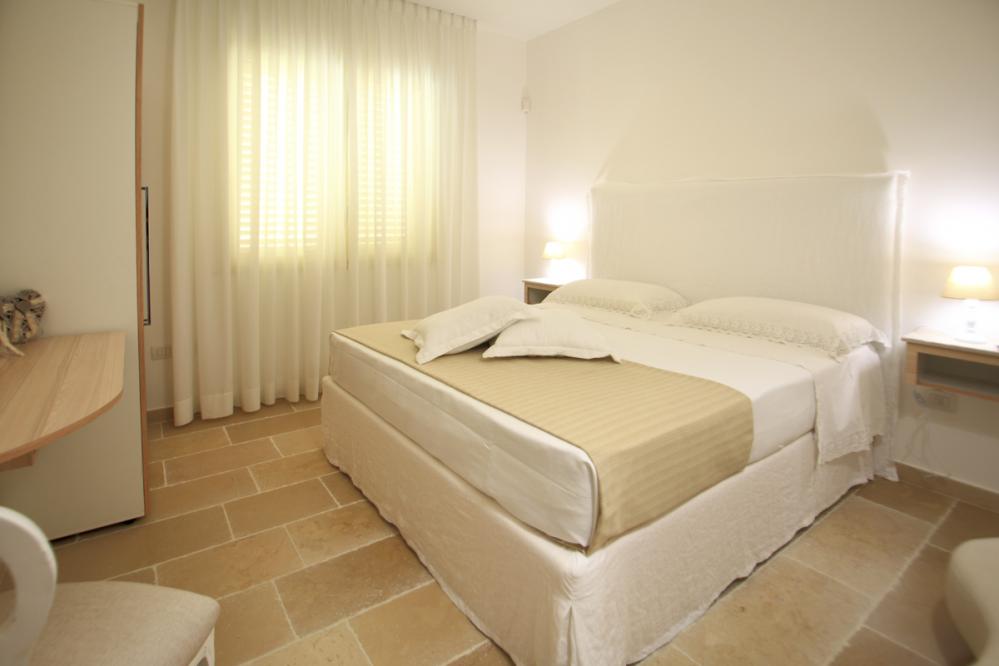 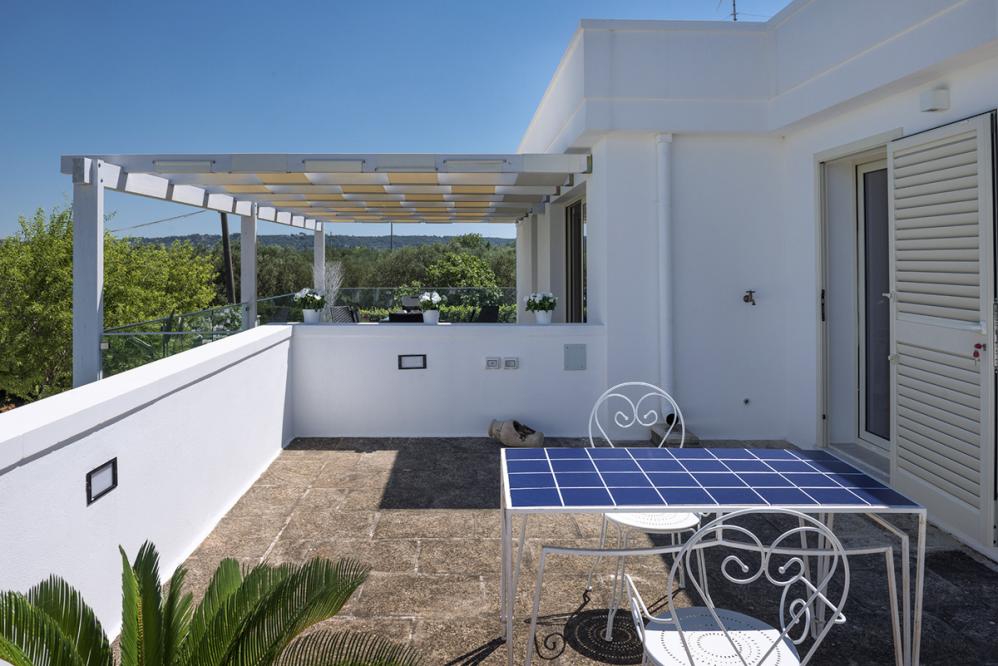 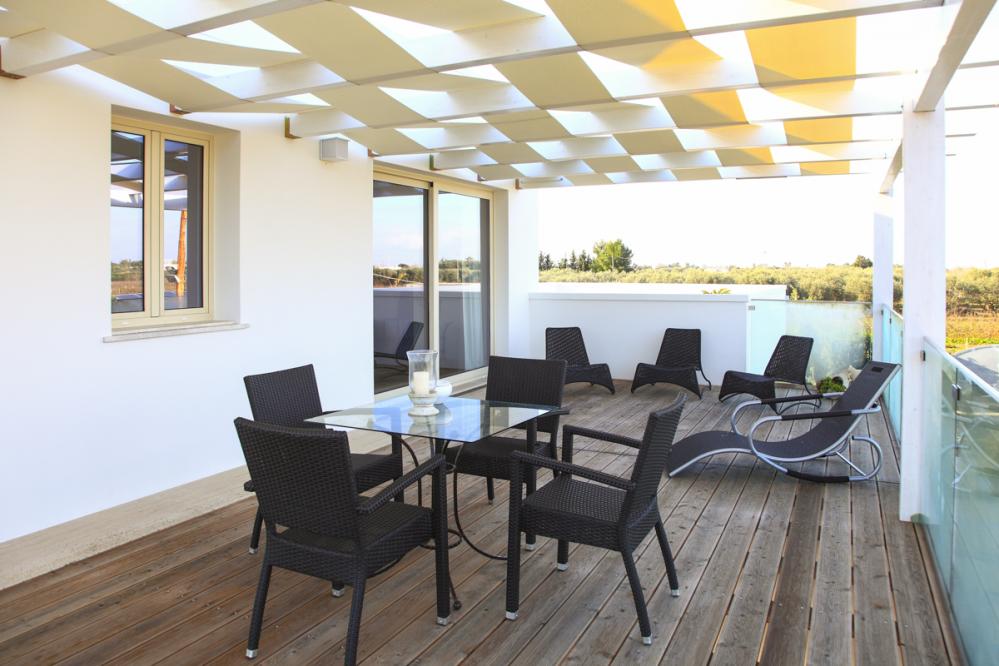 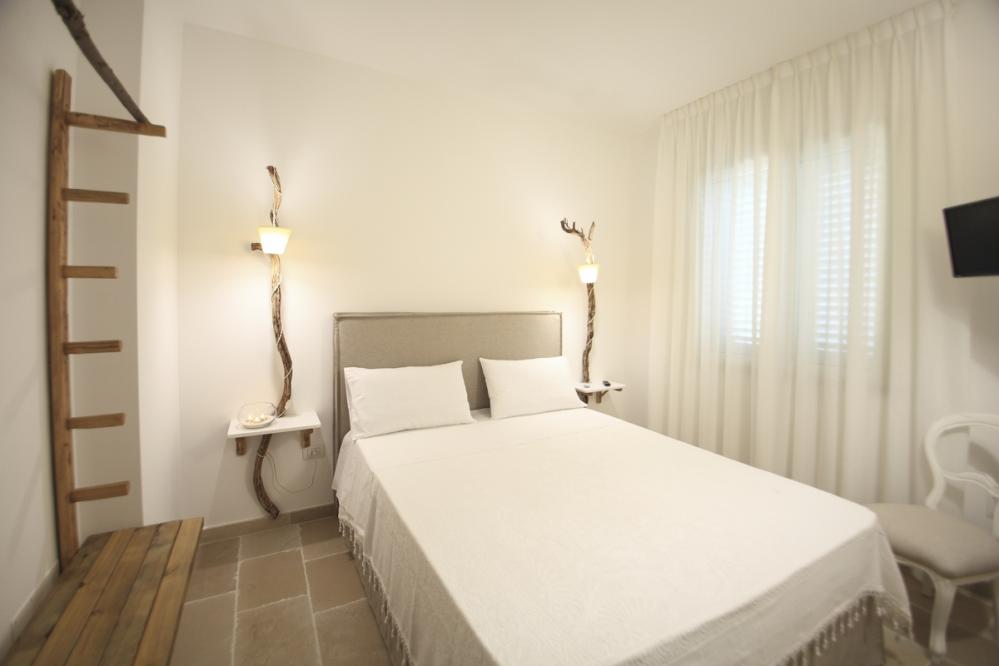 Relax in ultimate comfort at Villa Bianca, this beautiful new villa that offers everything you could need and want. As you first lock eyes on this villa you’l...

Relax in ultimate comfort at Villa Bianca, this beautiful new villa that offers everything you could need and want. As you first lock eyes on this villa you’ll be enamoured; the luxe home combines modern architecture with authentic Italian style.

The villa, which is spread over two levels accommodates 10 guests in four rooms and a sofa bed. The four bedrooms are located on both the ground and upper floor, as well as one double room in the independent apartment. Each bedroom is spacious and air-conditioned. There are three bathrooms also spread across the floors and apartment, all of which are complete with contemporary fittings.

The living area is on the ground floor and is an open space, offering an ideal place to sit and relax as the day goes by watching a film as a family or enjoying a good book. There is plenty of space for everyone to sit together. The villa offers a well-equipped kitchen, that is incredibly modern. There are all the bells and whistles you could need to cook up a tasty feast, which can be enjoyed at the breakfast bar or at the large dining table all together.

The villa has a dreamy outdoor area, which can be enjoyed while sitting in the living area thanks to floor to ceiling windows. The patio leads out to the glistening private pool and an outdoor dining and living area. Wander the tiled path and take a dip in the pool, then relax on the sun loungers in the lush garden.

Separate from the main house is a simple yet comfortable independent apartment, which offers a double bedroom, living area and double sofa bed, bathroom and kitchenette. This is an ideal spot for a family or any member of the group seeking a little extra privacy.

Villa Bianca is composed of the main villa and the annexe apartment, which is separate from the main house.

Villa Bianca is located in the town of Melissano, an inland spot that has remained a small farming v...

Villa Bianca is located in the town of Melissano, an inland spot that has remained a small farming village. Here you can find churches, palaces and old walled feminine estates, called masserie. The town is known for its historical and architectural offerings, as well as some of Puglia’s best vintages, including Primitivo, Malasia and Negroamaro. Melissano is located between the cape of Santa Maria di Leuca and Gallipoli. The area also has plenty of restaurants and bars, supermarkets and also a train station to get around the area.

The villa is located near many of the main coastal towns in the Province of Lecce; it’s less than a 10-minute drive from Gallipoli (18km) and Torre San Giovanni (12km) and slightly further from Santa Maria di Leuca (28km) and Lecce (45km).

Torre San Giovani is a commune that boasts one of the most spectacular beaches, with a long sandy and golden beach, that stretches as far as the eye can see. This seaside area has received awards for its beaches, they’re that amazing. This area is a popular beach resort so there are all the restaurants and amenities you could need and want.

Gallipoli, is a coastal town that boasts a very rich history including the Castello Angioino di Gallipoli that dates back to the 13th century, and is arguably most famous landmark in town.

Santa Maria di Leuca, also known as Leuca, This town is full of rich history and lined with dramatic coastlines and sandy beaches. This area is a popular resort town, and there is something to keep everyone entertained. This area is predominantly all about the sea, there are beaches that can entertain all holiday makers, such as Felloniche, Torre Vado and Pescoluse - these beaches all have lidos, bars and restaurants.

Lecce is a little further away, but it is well worth a day trip. This is the main city, and it is renowned for its baroque buildings that you won’t want to miss, especially Basilica di Santa Croce, the Piazza del Duomo and the Cathedral of Saint Mary of the Assumption.

There’s a reason Puglia is the region of the moment, or rather several: the excellent food, exuberant architecture dotted in the South, the breathtaking coastline and heaps more. Puglia is much bigger than you might first expect, but you’ll get both a wonderful and varied Italian experience here.Use our travel guide as a nifty sidekick (think of us like the Robin to your Batman) to help you plan the holiday of a lifetime.

And don’t forget we’ve got a selection of villas in Puglia that will add that extra special touch to your trip.

With so many coastal towns close by, there is something to keep holidaymakers of all ages entertaine...

With so many coastal towns close by, there is something to keep holidaymakers of all ages entertained.

Of course, the beaches will keep kids entertained and parents are in luck as many of the nearby beaches are family-friendly, especially those at Torre San Giovani that have awards for being clean and safe. At Gallipoli, Zeus beach and Spiaggia Baia Verde di Gallipoli are very child-friendly. Families should definitely take on the waters by boat, seeing the dramatic cliffs from a different angle.

Lecce is a great place for a day trip, with so many historical spots to immerse the children in. There’s a lot of things to keep children entertained and educated, from the Basilica di Santa Croce and Museo Faggiano - who doesn’t want to learn about knights.

Ask a question about Villa Bianca