Nestled in landscapes of rolling green fields, farmhouses and white chalk cliffs, Normandy is an absolute gem on the north coast of France. Historical French coastal cities, seaside towns and medieval villages are in abundance and the art and culture scene is buzzing. There’s a wealth of activities and attractions to do in this incredible region so you can fill your days with things to do. Or for those seeking a relaxing tranquil holiday, Normandy towns are also perfect for the slow life. Wondering which towns in Normandy are right for your holiday? We’ve handpicked our favourites below… 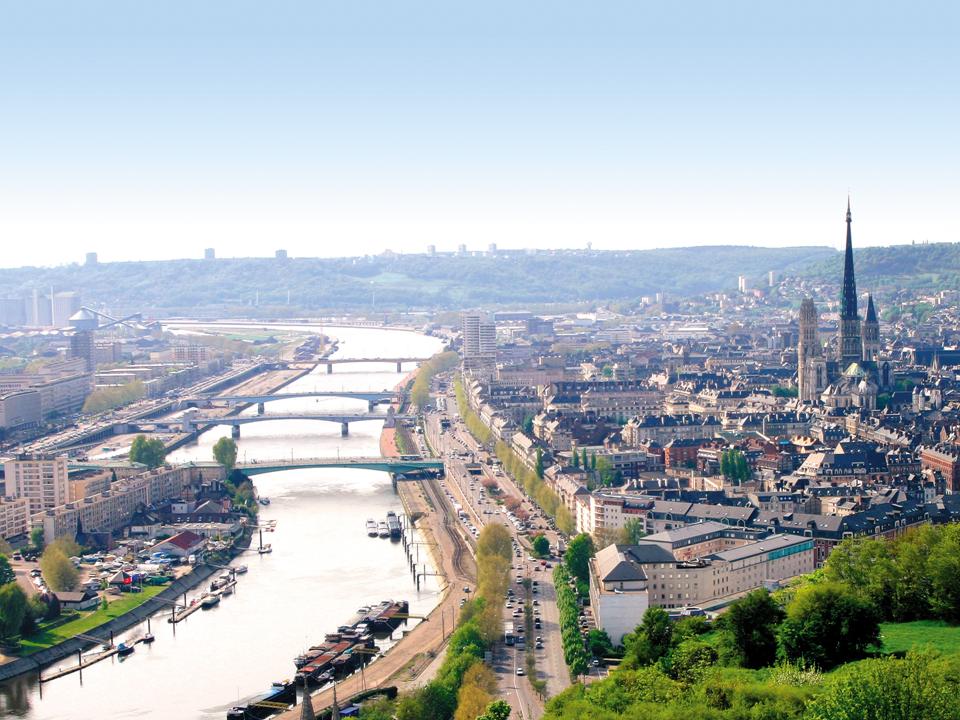 Rouen is the historic capital of Normandy with a rich history of grandeur and tragedy. Calling all art lovers! It’s reputed as having one of the finest collections of art in France – Claude Monet found much inspiration in the magnificent cathedral that’s depicted in many of his paintings. You can enjoy some of Monet’s paintings along with many other famous artists works’ at the Musee des Beaus-Arts de Rouen, this art museum dating from around 1880 has fine collections of painting, sculpture and drawing.

The Gothic cathedral of Notre-Dame is spectacular and originates back to 1200 but reconstructed in the 15th and 16th centuries due to fire damage. It is a true architectural wonder and the 13th century stained glass windows are a sight to behold. Housed inside the Cathedral are many historical treasures along with a chapel that is dedicated to Joan of Arc who was burnt at the stake in Rouen in 1431.

Whilst in Rouen it is well worth booking tickets to see an Opera with Opera de Rouen offering contemporary and classical Opera.

After a day of sightseeing or perhaps a pre-opera treat, enjoy some fine traditional French cuisine at La Couronne, France’s oldest inn dating back to 1345, a Norman house that has been lovingly preserved. You’ll be treated to classic French cuisine beautifully presented in historic surroundings. 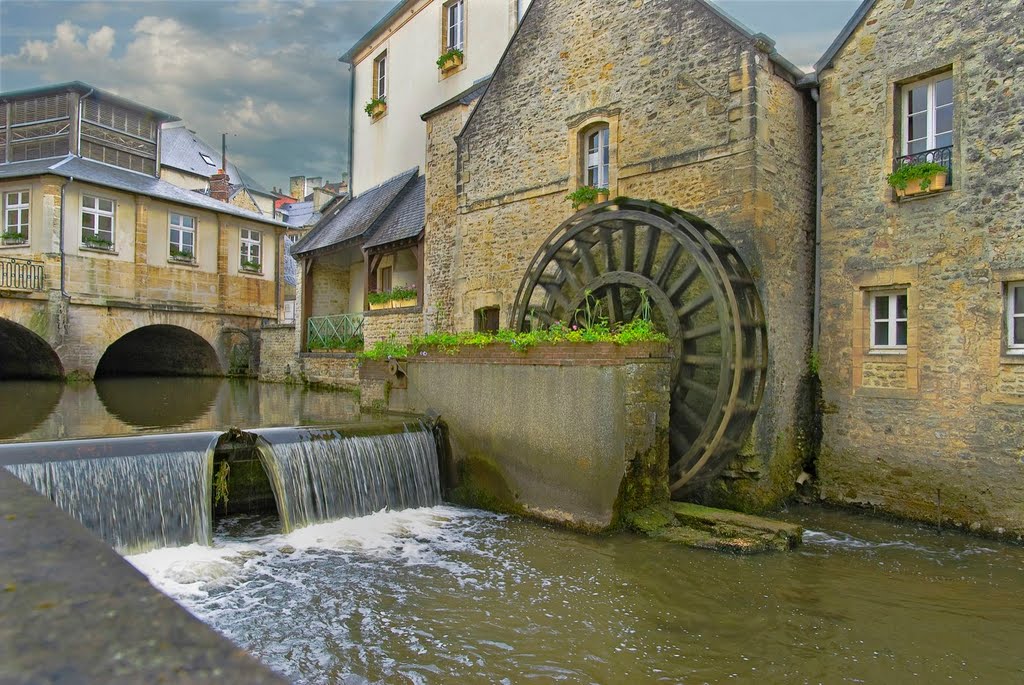 Bayeaux is a beautiful medieval town that is well documented for its historical importance during the Second World War and home to the largest British cemetery outside of the UK (most buried here were killed during the invasion of Normandy). Bayeux somehow retained many of its historical buildings during the war and was the first liberated city during the great battle. Each year a remembrance service is held on the 6th June at the Bayeux cathedral, an impressive gothic architecture and a national monument of France.  Thought to be the first home to the Bayeux tapestry, a unique 11th century pictorial story of medieval France that is now located at Musee de la Tapisserie de Bayeux.

Explore the Bayeux charm by exploring its canal paths where you will come across picturesque gardens and parks and enjoy the peace and tranquillity. Another of Bayeux charms is its market with a variety of local produce and wares: whether searching for an authentic keep sake or just sampling some of the wonderful cheeses on offer the market is a delight to browse. 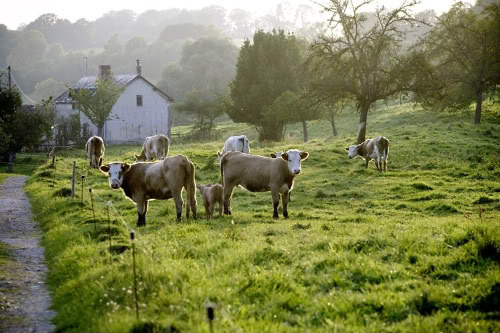 This traditional French village is surrounded by pastures and orchards and is a must-visit for cheese lovers and foodies alike. Normandy’s famous cheese is named after this quaint French village – the story being the recipe was created by a local famer’s wife Marie Harel in 1791 with the help of a priest from Brie whom Marie Harel was harbouring during the French revolution.

During the summer months, La Maison de Camembert opens its doors to the public and is used as a visitor’s centre – an intriguing building that is round and white much like a very large Camembert box!

The surrounding areas have many local producers providing gourmet delights such as Calvados and Poire (pear cider a real treat on a summer’s day!) also black pudding from Mortagne au Perche and countless other fresh local delicacies.

The coast of Normandy has many seaside towns and beaches that are wonderful to visit below are two that are equal in appeal but contrast in personality. 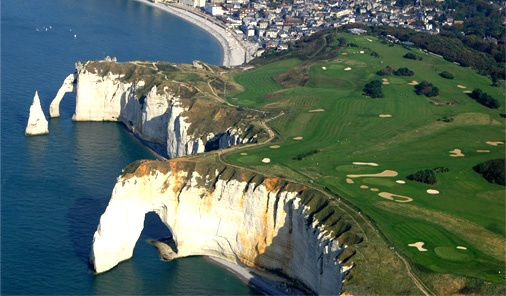 An unforgettable seaside town, world-renowned Etretat is situated on the Alabaster coast in Normandy. Admire amazing seascapes created by cliffs and naturally formed archways that strut into the sea creating a wild and beautiful scene. The coastal paths allow panoramic views of this area of outstanding beauty. The beach is a pebbled with a variety of water sports on offer. There’s even a golf course 150ft above the sea! 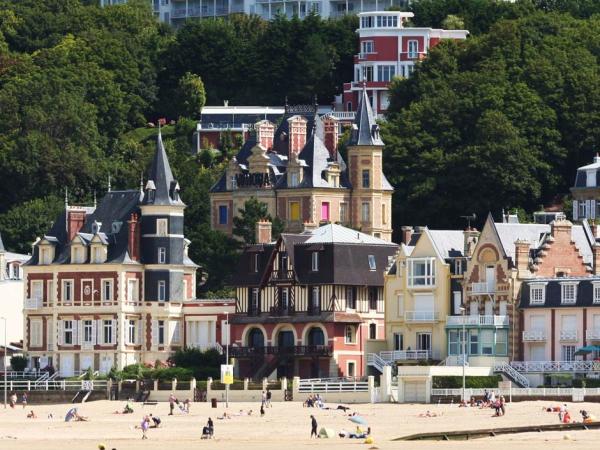 This is a great family location that is perfect for a seaside holiday. The long golden sands are ideal for beach games and soaking up the summer sun. There are an abundance of water-sports on offer and several heated indoor and outdoor pools available.  The 19th-century boardwalk and many of the local grand houses and hotels create a flamboyant feel. The fishing port is still active and this is very apparent in the local restaurants serving some wonderful locall- sourced sea food.

Trouville has a casino which was built around the same time as the boardwalk and was featured in a film based on the life of Coco Chanel.  Among the many grand villas in Trouville, Montebello villa is a real stunner and dates back to 1866 . It’s now a museum exhibiting paintings by Charles Mozin who first painted Trouville in 1852 – later followed by more well-known  artists such as Monet and Dumas.

Throughout the Normandy towns and villages are many festivals. Whether it be food in Pays d ‘Auge,  Jazz in Honfleur or the American film festival in Deauville there is something to be embraced all year round.

Normandy towns have so much history along with so many attractions and places of interest. Green countryside, stunning seascapes and fabulous food – it’s a must-visit! Fancy staying at one of our villas in Normandy? Our friendly concierge team are always on hand to help you with your booking! Or need some more inspo on what to do in Normandy? Check out our Normandy Travel Guide for our top picks!