Often topping the ranking for the ratio of Blue Flag-awarded beaches, Cyprus has no fewer than 65 stretches adorned with the prestigious accolade. The island is perfect for combining a slice of history with beach life – you can be ruin-spotting first thing; swimming and sunbathing a few hours later. The quality meets up to the quantity too, with everything from world-class water-sports destinations to enchanting secluded bays and family-friendly beaches on offer. Here are our top 10 Cyprus beaches for your sandy summer holiday. 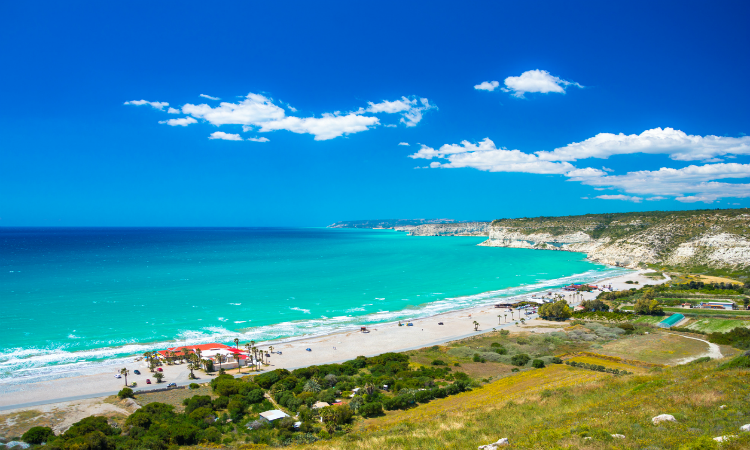 The beaches west of Limassol are more appealing than their eastern counterparts, and the closest can be found beneath the ancient ruins of Kourion – perfect for a mix of Cyprus sightseeing and sun-baking. Sheltered by sheer cliffs, the bay is clear and calm, and there’s little development thanks to restrictions imposed on British Sovereign Base territories. You will find three “pop-up” tavernas, however, for all-day eats.

The beach at Paramáli is one of most unspoiled Cyprus beaches, perhaps due to a lack of signposting alerting visitors to its existence. To find this pristine stretch, head for Paramáli and turn off at Balti House, continuing on to a dusty track through hayfields. Another British Sovereign Base territory, this pebble-and-sand beach is frequented more often by nesting turtles than sun-worshippers. A strong offshore wind makes this hidden gem a kitesurfing hotspot. 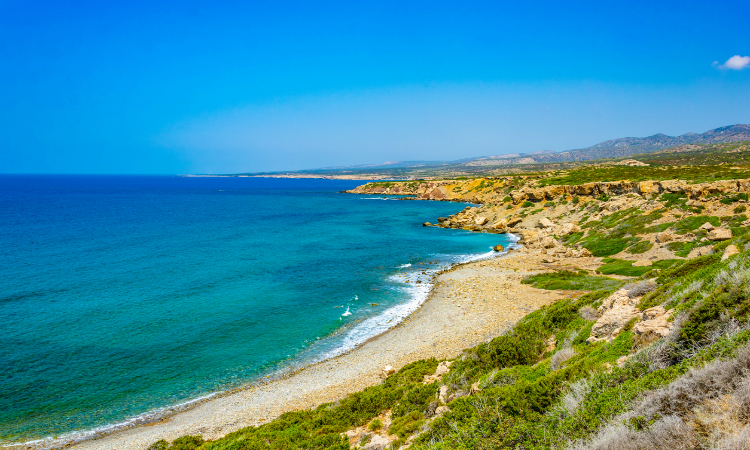 Remote and secluded, Lara Bay is accessible only by 4WD – but that’s the beauty of it. One of the best beaches in Cyprus for wildlife, this untouched sliver of sand provides an ideal habitat for nesting loggerhead and green turtles from May to August. While you must not disturb the creatures or the nests, you can visit the Lara Bay Turtle Conservation Station to see rescued hatchlings paddling about in large tanks – one of the coolest things to do in Cyprus with kids. 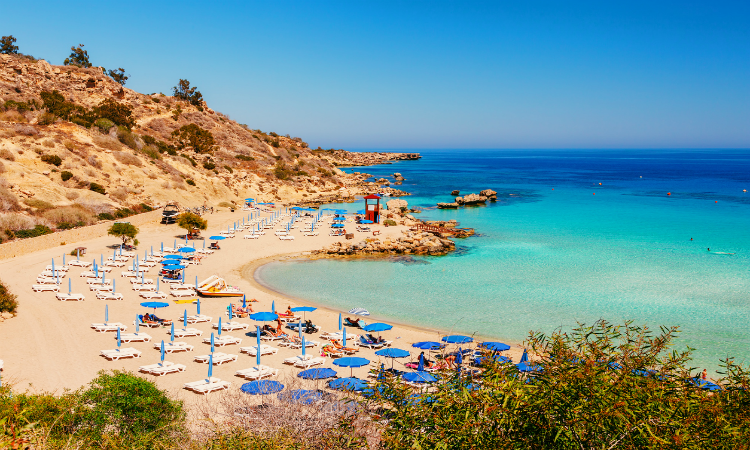 Dazzling white sands and turquoise waters make this Blue Flag award-winner one of the best beaches in Cyprus. Nissi Beach is a popular destination for water skiing and windsurfing, while back on land, groups of friends often strike up an impromptu game of beach volleyball.

A short bus ride from Ayia Napa, Makronissos Beach has chalk-white sands and azure waters, not to mention twisting rock formations. There are plenty of sun loungers, restaurants and bars, and the sea is calm enough for swimming. If it’s overcrowded, head to the adjoining, quieter Western Beach to escape the hordes or take time out at the nearby Makronissos Tombs archaeological site. 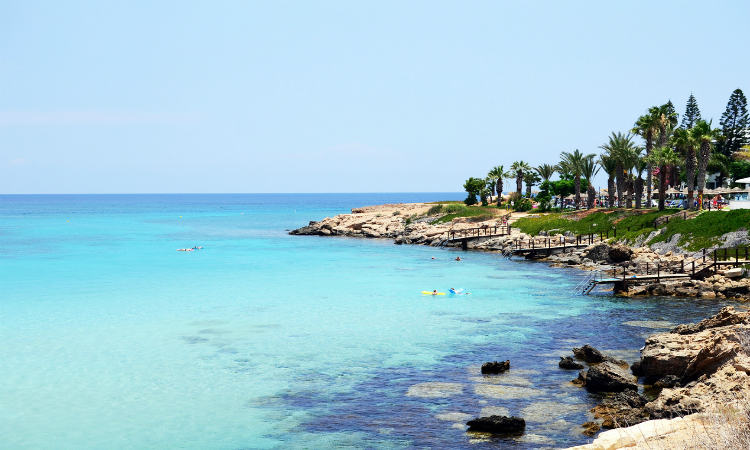 Another of the esteemed Cyprus beaches awarded a Blue Flag, Fig Tree Bay has soft Champagne-coloured sands and limpid blue waters. Named after a solitary 17th-century fig tree on its shores, the powdery stretch scooped third place in the World’s Top 50 Beaches for 2019 by Big Seven Travel. An uninhabited islet provides a scenic backdrop for sun-seekers and is a tempting goal for swimmers. However, the beach does get busy so arrive early. 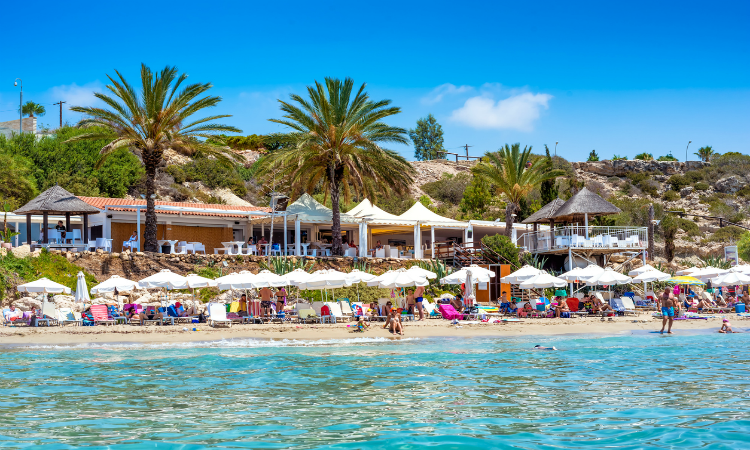 With golden sands and balmy shallows sheltered by limestone cliffs, Coral Bay is among the best beaches in Cyprus for kids. There are inflatables for children to play on in the water – invitingly clear for nervous swimmers. Located in Paphos, the horseshoe-shaped cove is peppered with sun loungers to rent, and a short walk from a clutch of food and drink places, many overlooking the harbour. You can sign up for boat trips from here too, as well as water-skiing and diving. 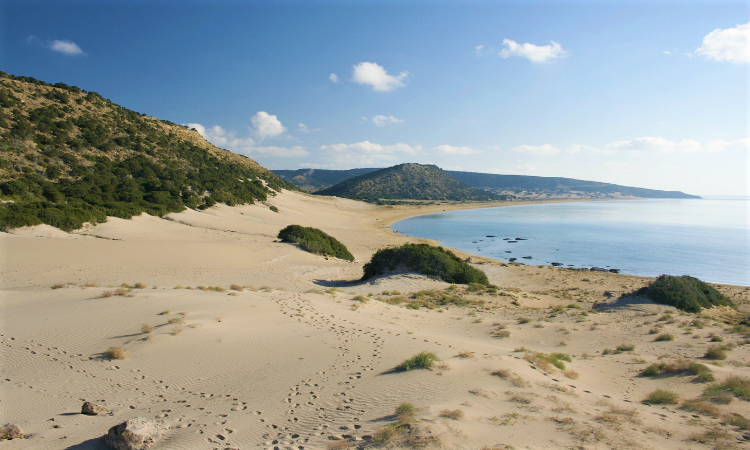 Hugging the tip of a peninsula in Northern Cyprus, Golden Beach more than lives up to its name – a long stretch of honey-coloured sands as fine as flour. This beach is fairly quiet, thanks to only a handful of sun loungers dotting the shores, but it’s a tranquil spot to unroll a towel.

Nestled at the foot of a wine-producing village, Pissouri Beach is ideal for oenophiles who want to explore the vineyards before flaking out on the golden sands. A cluster of water-sports centres also makes it one of the top Cyprus beaches for adventurous types. 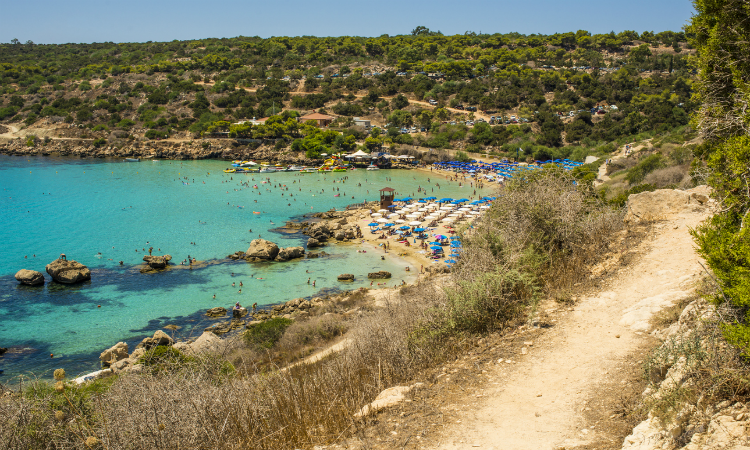 Close to Ayia Napa, this sliver of island paradise is small and sultry, with fine golden sands kissed by crystalline waters. It’s one of the best beaches in Cyprus for hikers, with a web of walking trails unfurling from the sands into the shady pine grove of the National Forest Park. After a scenic walk through the park, there’s nothing more tempting than a cooling dip in the sheltered bay.

Top 10 things to do in Cyprus

Map of our top 10 Cyprus beaches