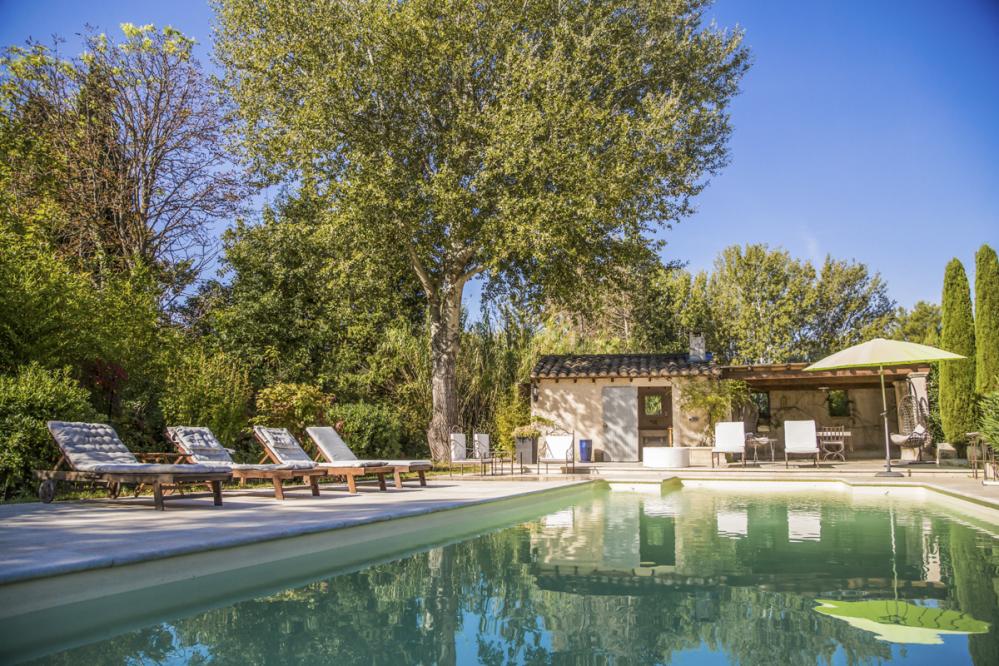 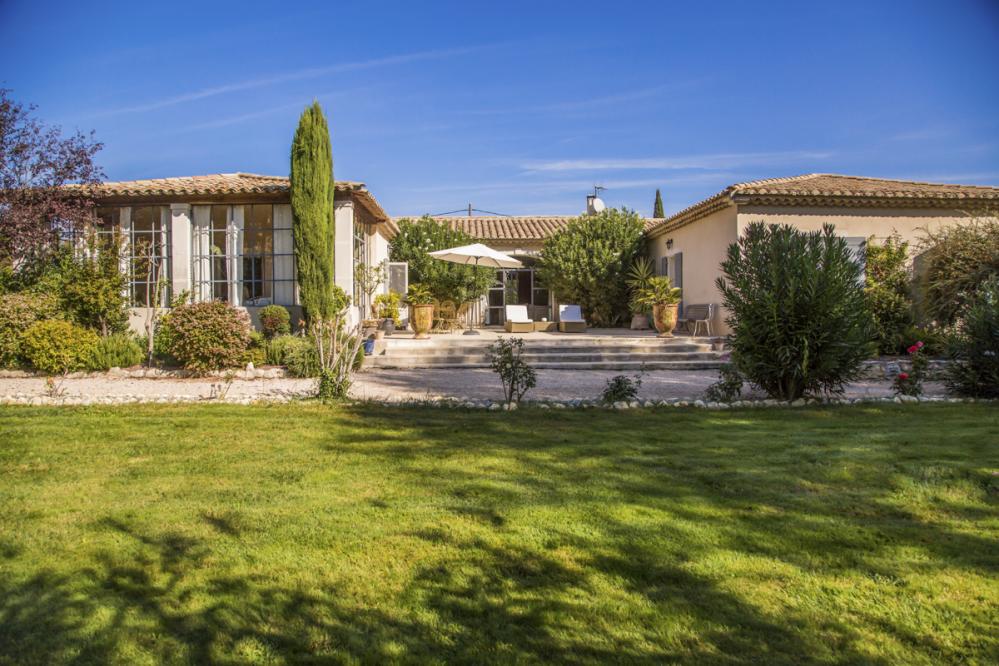 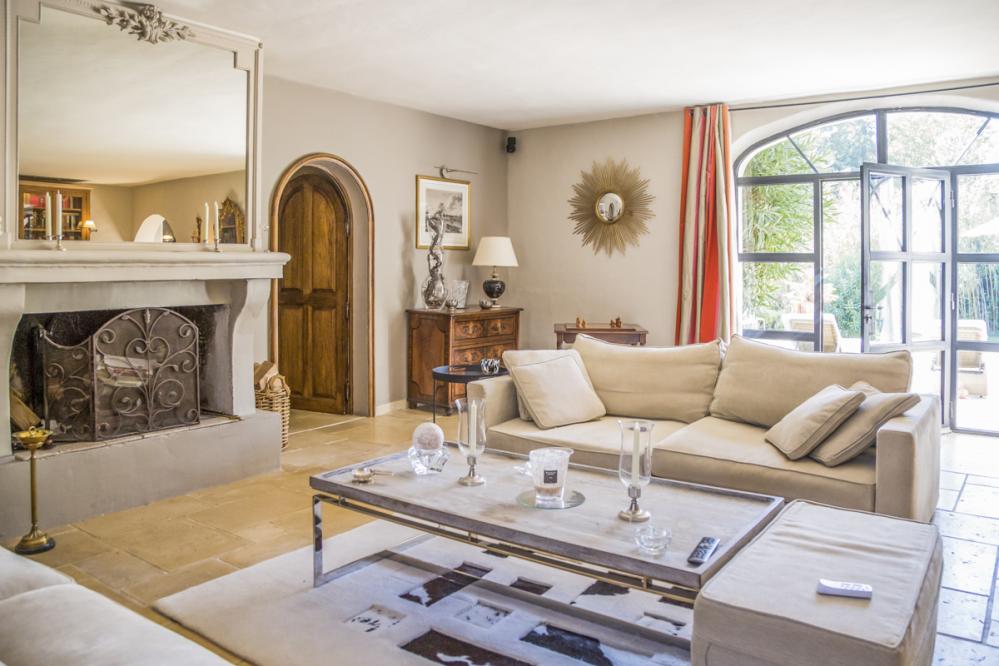 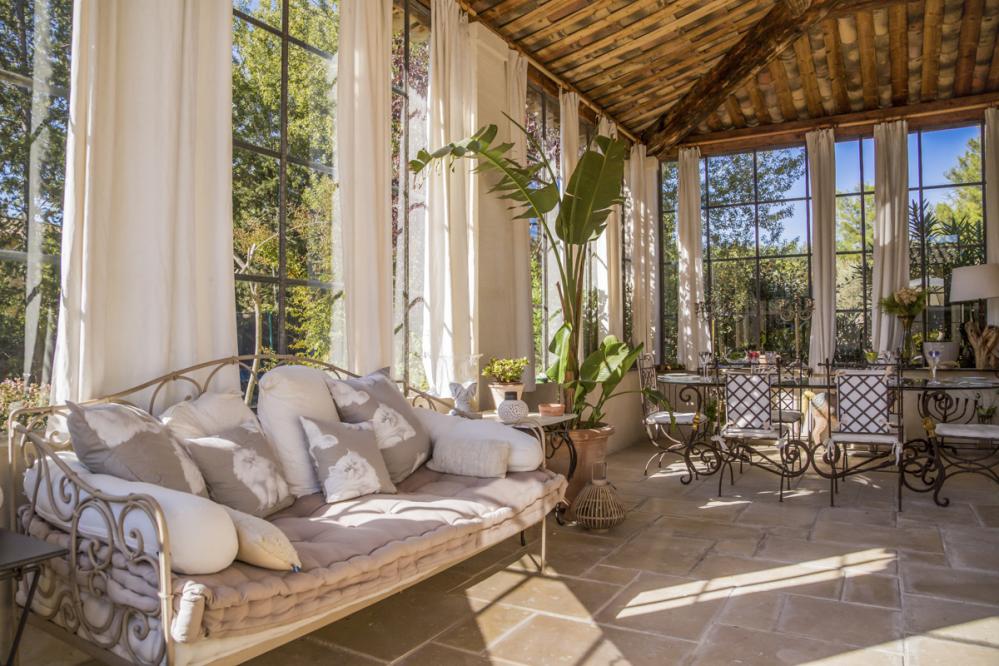 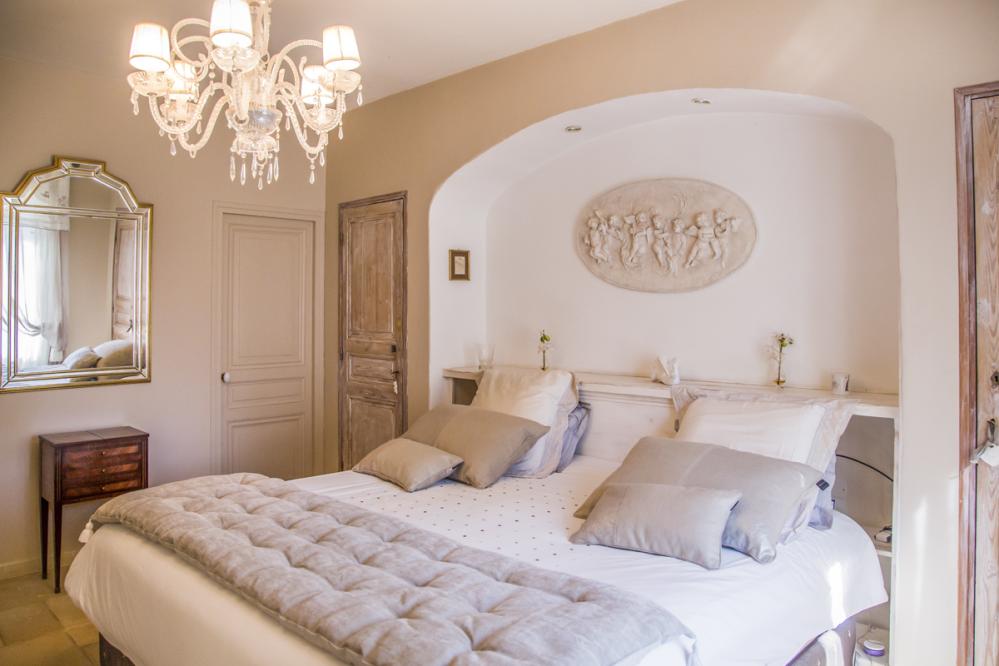 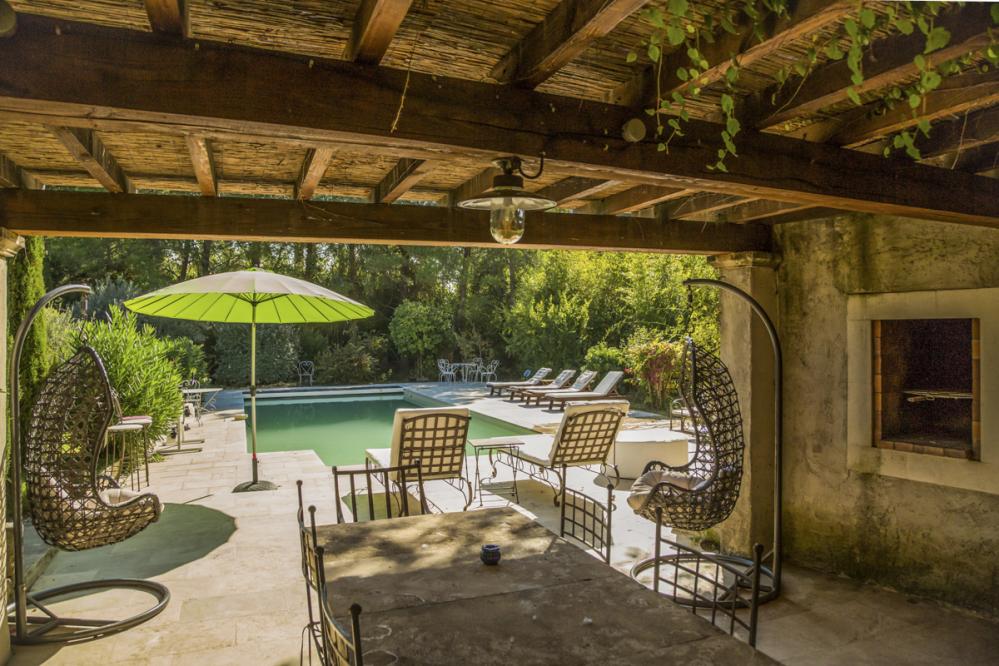 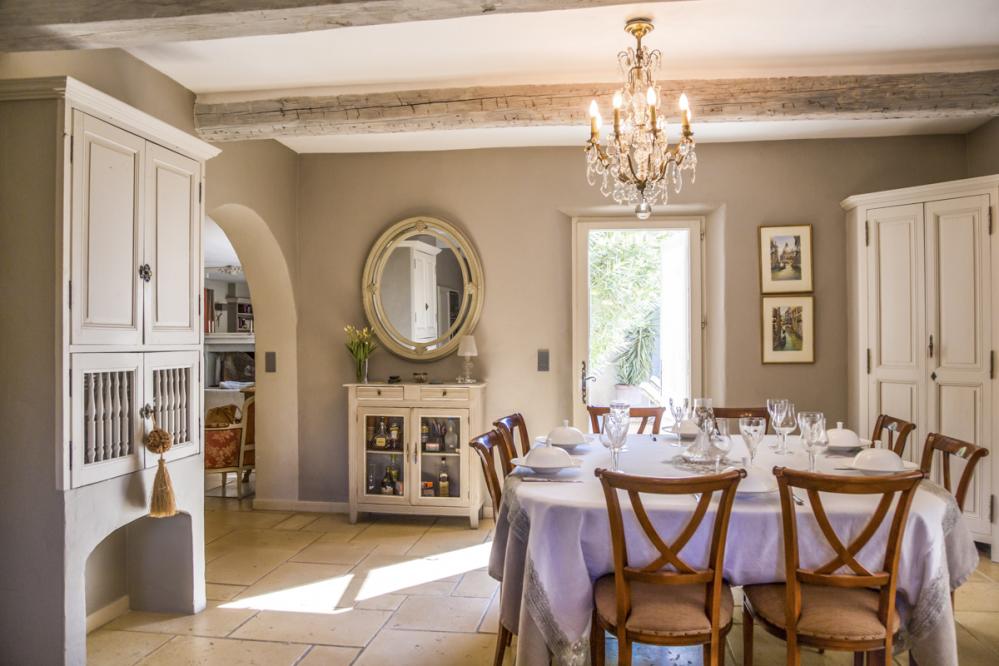 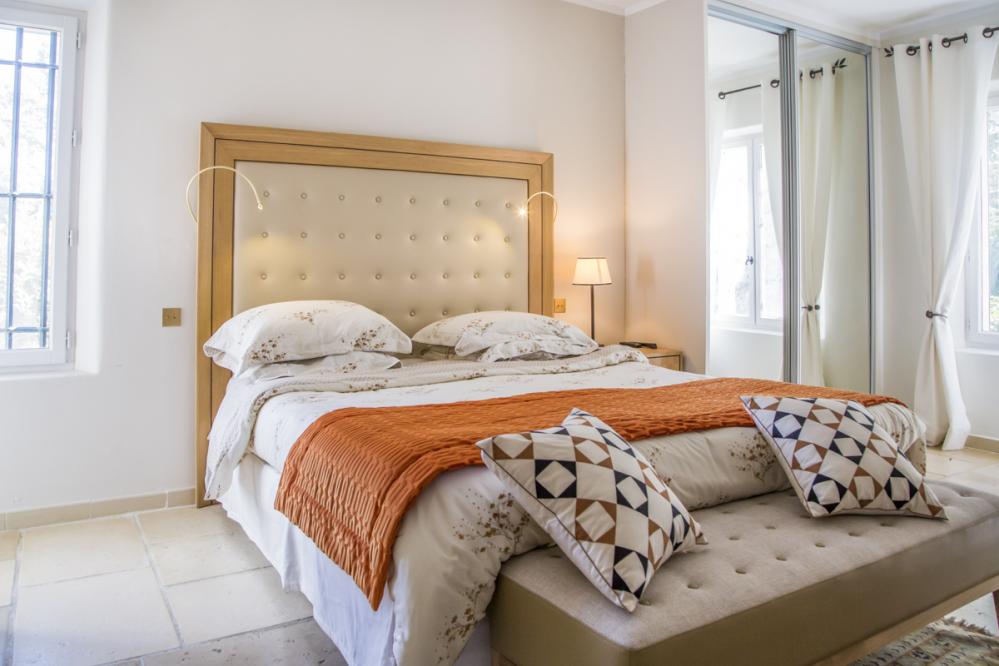 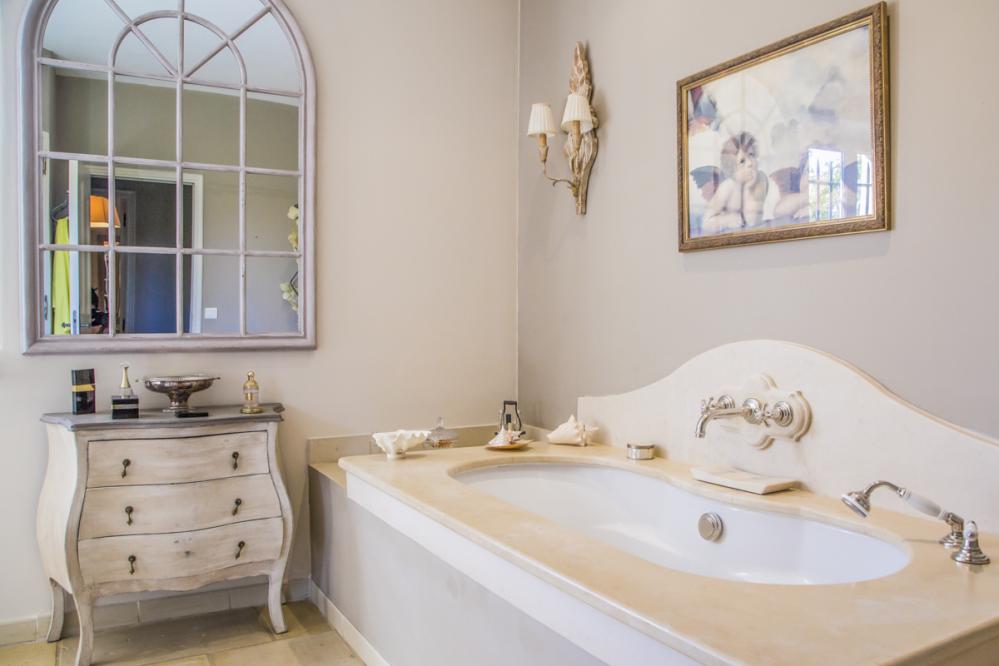 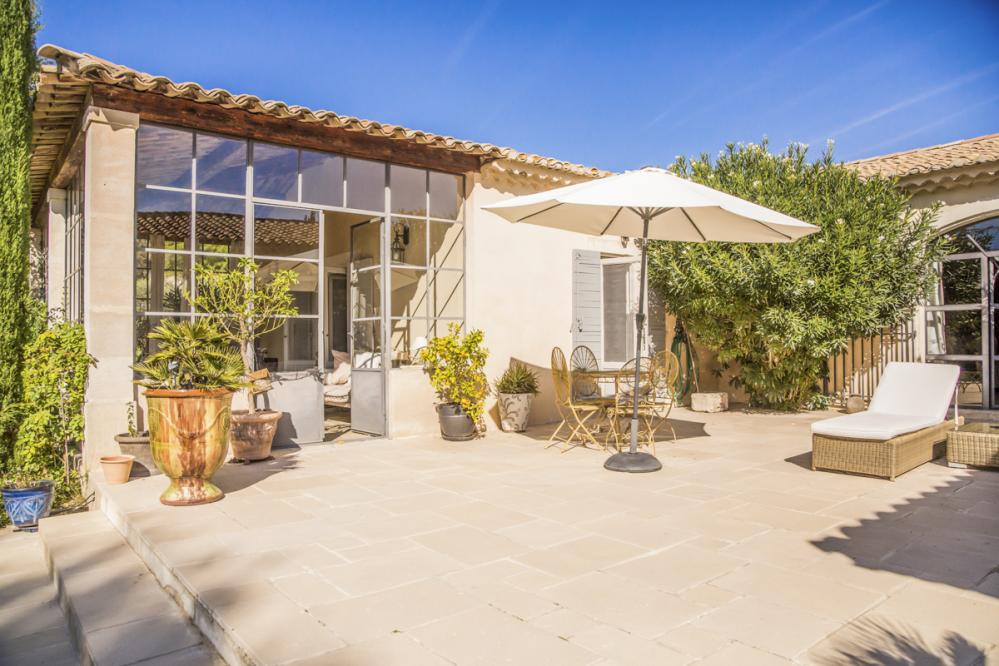 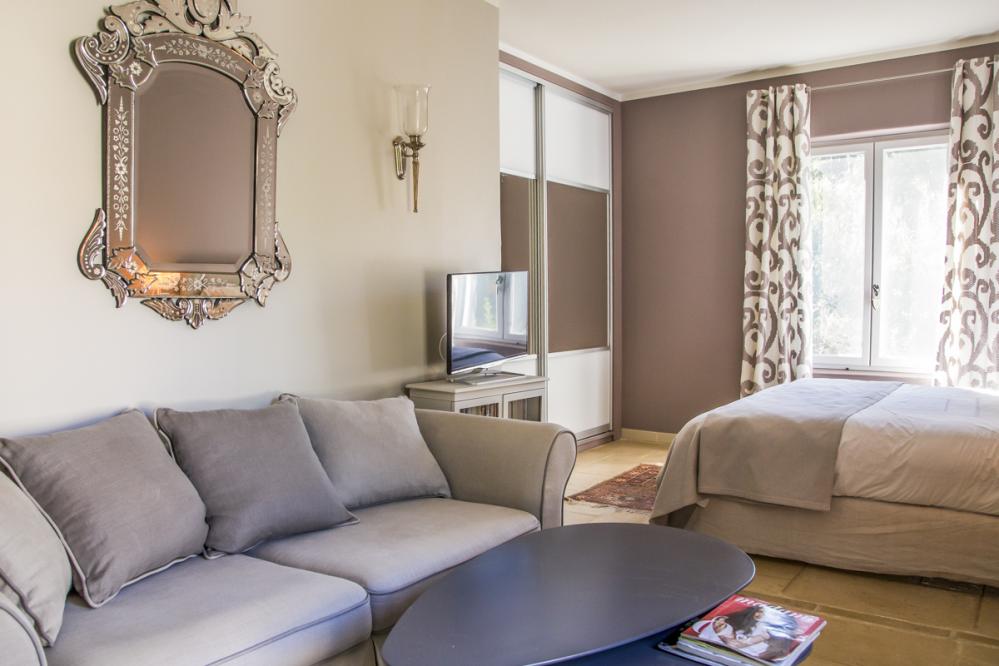 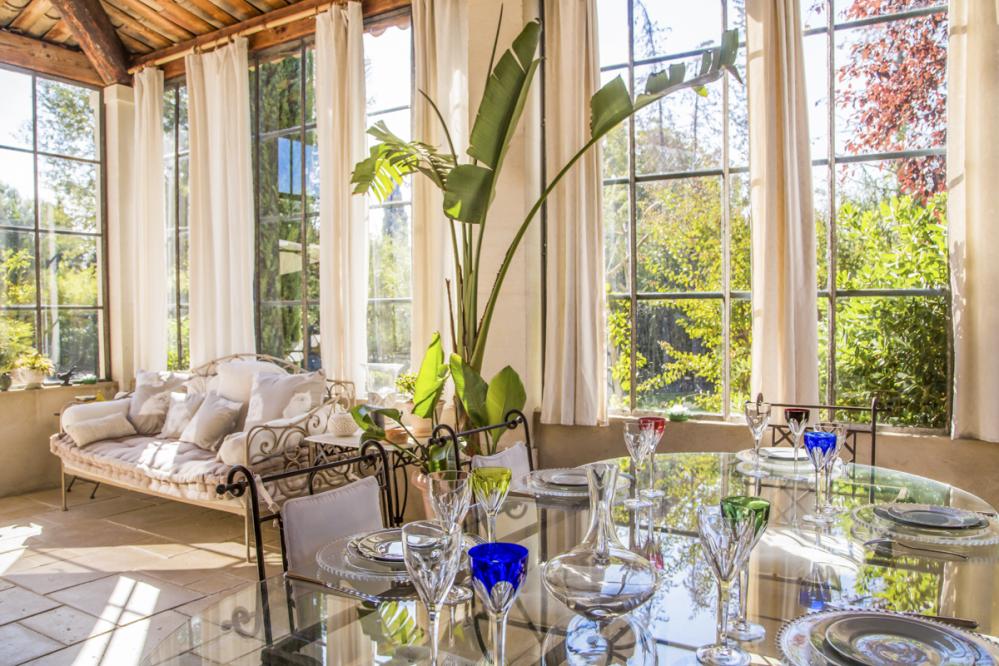 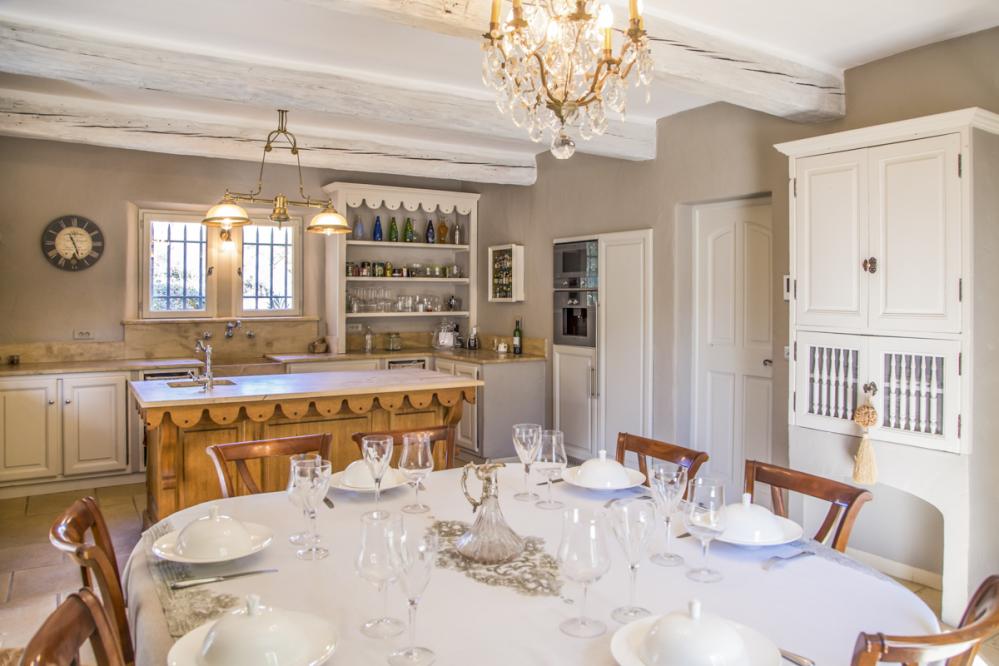 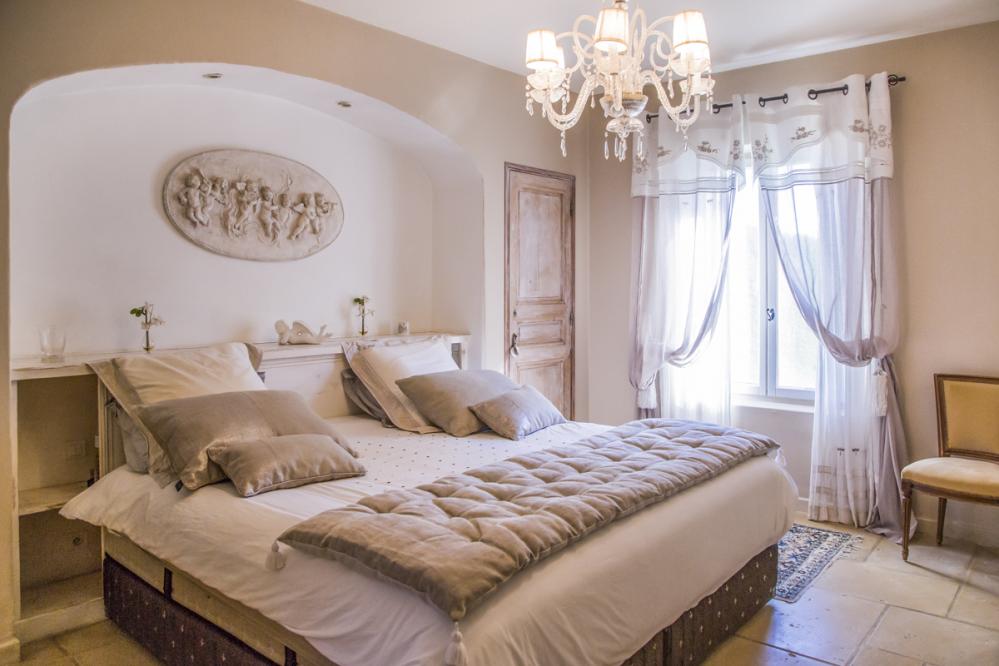 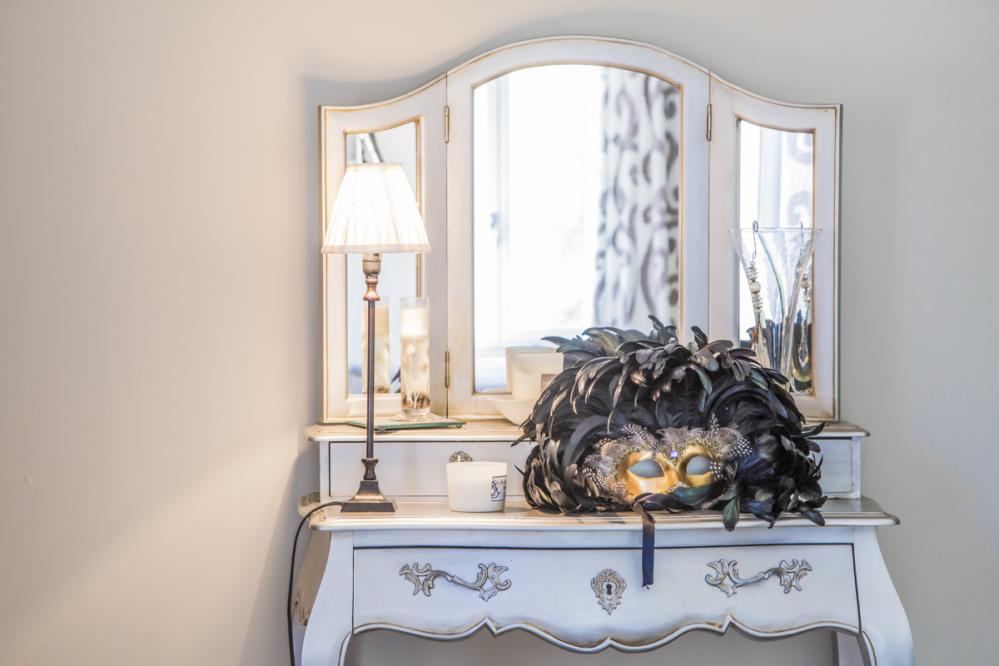 This attractive home offers an ...

This attractive home offers an airy, single-storey lay out, with a natural interplay between indoor and outdoor living. Terracotta tiled roofs and charming gardens with endless secret nooks and separate spaces offer an authentic feel. Whether it be on the luscious lawns, the dazzling sun-dappled terrace or the shaded, covered veranda, dining al fresco will be a stylish affair.

Wrought-iron garden furniture, decadent loungers and romantic hanging seat are ideal for a morning coffee or an evening glass of wine, amid the scent of pines and olive trees. L’Elégance offers guests the ultimate tranquil retreat; a luscious haven of understated luxury and timeless charm.

The glistening pool is set in a sleek patio framed with elegant parasols, bistro set and an outdoor kitchen-dining room and barbecue; ideal for long and lazy afternoons by the pool enjoying Provençal flavours.

Guests will be immediately struck by the comfort and chic taste that defines the interiors at L’Elégance; an effortless blend of original features (exposed timber beams and antique wooden doors) and touches of relaxed glamour (gilded frames and ornate, oil paintings and dripping chandeliers). This handsome home sets the scene for both informal yet impeccably chic holiday style.

Ample proportions and semi open-plan spaces add to the informal indulgence of this home; with separate spaces whether it be a quiet reading corner by the fireplace, a lively group meal or some ‘downtime’ with the entertainment features. A particularly lovely spot is the luminous conservatory - styled much like an orangery, offering a delightful space for tranquil breakfasts or evening nibbles whilst enjoying the garden views.

Eight people can be accommodated across four bedrooms and three bathrooms (with the option of two further guests using the sofa bed). Each bedroom offers distinct character and restorative charm, from beautifully upholstered antique reading chairs, to accents of vivid colour, to statement headboards for a regal touch.

L’Elégance is nestled in a prime position; both secluded, yet only two kilometres from the closest amenities of Saint Rémy de Provence which can be accessed via winding country lanes. Saint Rémy, is known for its bustling arts community, as well as its café-lined squares and renowned Wednesday market. A little further afield UNESCO-listed Pont d’Avignon (18 km), or the charming Arles (22 km), much beloved by tortured Expressionist Van Gogh can be enjoyed, as well as the magnificent and varied terrain of the Alpilles (little Alps).

L’Elégance is in an ideal position: set down winding country lanes in tranquil seclusion, yet les...

L’Elégance is in an ideal position: set down winding country lanes in tranquil seclusion, yet less than five minutes by car to Saint Rémy de Provence (two kilometres) where the nearest pharmacies, banks, shops and restaurants can be found.

Saint Rémy is a bustling, lively place with narrow, winding streets as well as colourful café-lined squares. Known for its arts heritage, most notably former home of Van Gogh, today this region retains a thriving arts community. Local artists display work in the galleries of Saint Rémy, and along the Route des Artistes on selected Sundays. The Mausole Saint Paul offers tranquil cloistered gardens worth a visit (as well as being the psychiatric centre which treated Van Gogh after he cut off his ear.)

Those keen on walking, climbing, cycling or riding will be well looked after; this region is rich with charming Provençal market towns as well as intriguing natural beauty. Saint Rémy is in the heart of the Alpilles. Set between the Carmargue and Luberon in Western Provence, lies this spectacular natural park, known for its intriguing breadth of plant varieties and bird species, as well as its craggy beauty encompassing limestone ranges, marshlands and olive groves.

At the heart of the Alpilles range, visitors will be able to explore traditional, pretty villages such as Eygalières and Paradou, many of which have earned the status of “plus beaux villages.” History buffs will enjoy archaeological sites such as Glanum, which features Roman settlement remains that prospered from the sixth century BC to the third century AD.

Wildlife-lovers will be particularly spoilt in the Alpilles with its rare bird life, whilst those keen on hiking, riding or cycling will have an array of trails to wind their way leisurely through this delightful part of Provence.

Avignon is about half an hour away (22 km), known for its famous Pont, which has an intriguing history dating back to the Middle Ages, whilst Les Baux de Provence is dramatically perched atop the limestone Alpilles Mountains and boasts a fortified tenth century castle as well as quintessential Provençal charm.

Children of all ages will be superbly catered for in and around Saint Rémy, whether it be enjoying ...

Children of all ages will be superbly catered for in and around Saint Rémy, whether it be enjoying artisan chocolates, picking up hand-made lavender souvenirs at the markets or enjoying family meals out flavoured with the famous local olive oils and herbs.

Active youngsters will have endless choice, from rock-climbing craggy limestone ranges to ambling through gentle valleys dotted with pretty villages, to discovering the countryside on horseback or by kayak - the Alpilles (‘small Alps’) offer trails suitable for all levels.

St Rémy’s old centre has a pedestrian-friendly lay-out, a smattering of chic boutiques and lots of family-friendly restaurants, as well as a range Van Gogh trails. Children in particular will enjoy the Joël Durand chocolate shop, where visitors can enjoy ganache-filled samples or buy chocolate-covered ice cream bars.

Les Baux de Provence castle is dramatically perched atop a limestone hill. During summer months there are re-enactments of medieval military battles that will bring history to life for youngsters; there is also an audio-guide, a smartphone app and even a free activity book suitable for children from seven to twelve.

The Musée Granet in Aix en Provence (hometown to Cézanne) offers weekly art workshops for children (worth booking in advance), whilst many of the artists trails or Van Gogh tours around Saint Rémy are family-friendly.

The Moulin de Calanquet is well worth a visit: a family run manufacturing farmhouse and olive mill, where children can learn about the production of olive oils, various tapenade, fruit jellies and other products - an unexpected delight of Saint Rémy.

At Oliver’s Travels we pride ourselves on going that little bit further for our guests. From private chefs to babysitters we can help you arrange those little extras that make it a truly memorable holiday. Simply fill in the concierge request form or contact the Oliver’s Concierge Team who will be happy to help. We can typically help you arrange any of the following:
- Maid service/extra cleaning
- Private chef/cook/catering
- Welcome hamper/pre-stocked fridge
- Local day-trips or tours
- Airport pick-up/drop-off
- Babysitting / childcare services
- Bike hire

Rental Rates
Please note: All rates below are subject to FRENCH TVA 20%

Ask a question about L'Elegance