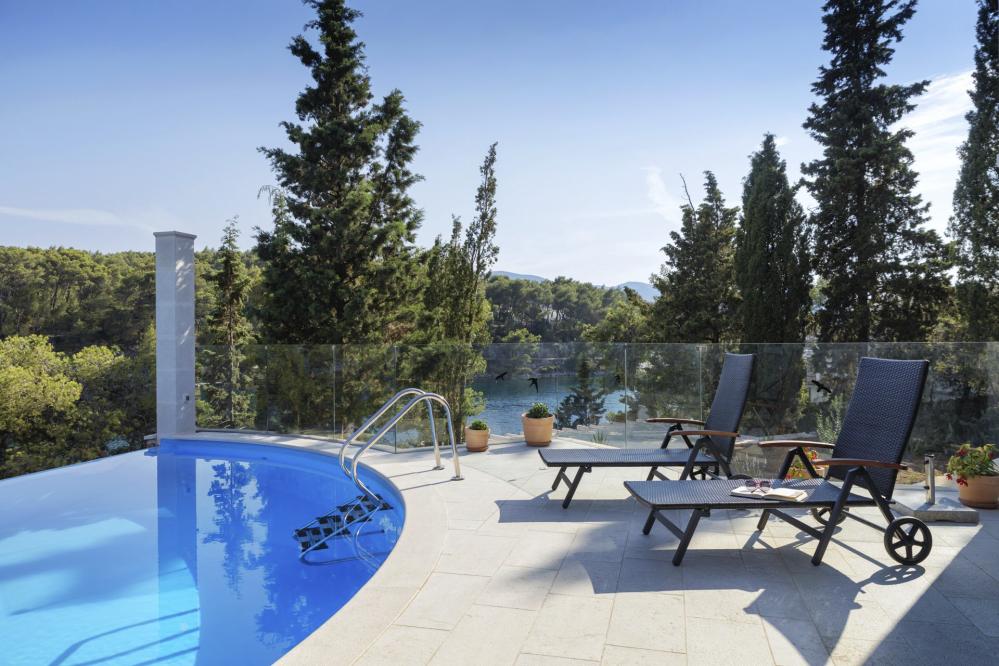 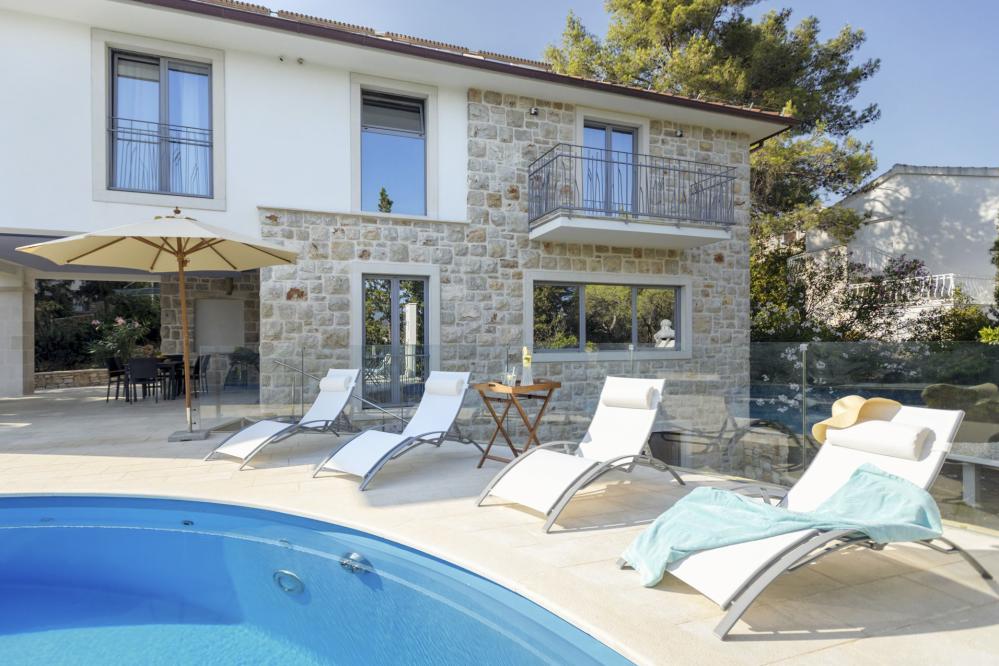 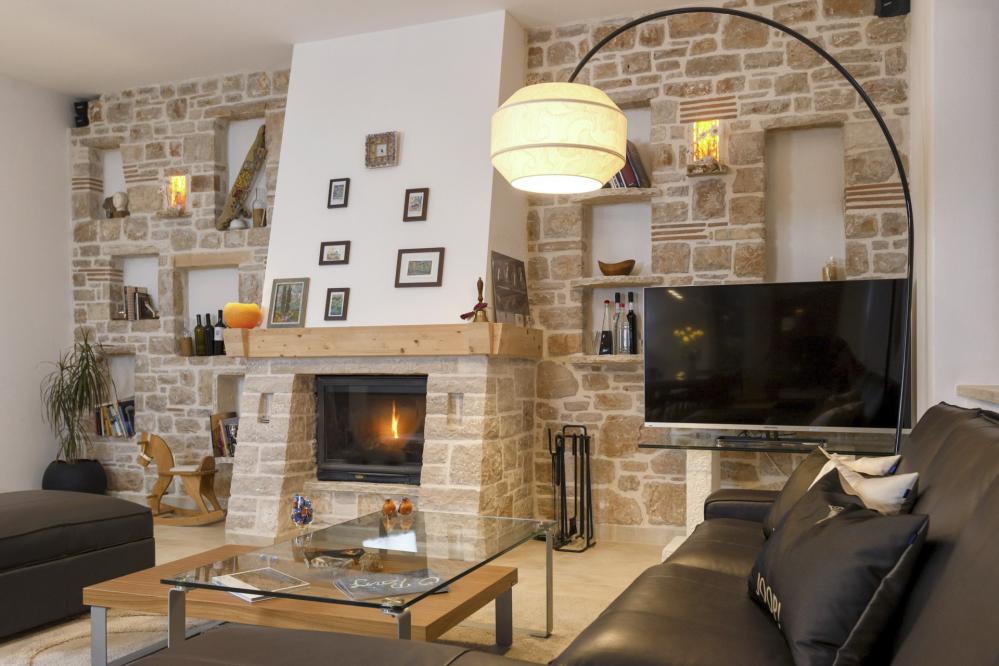 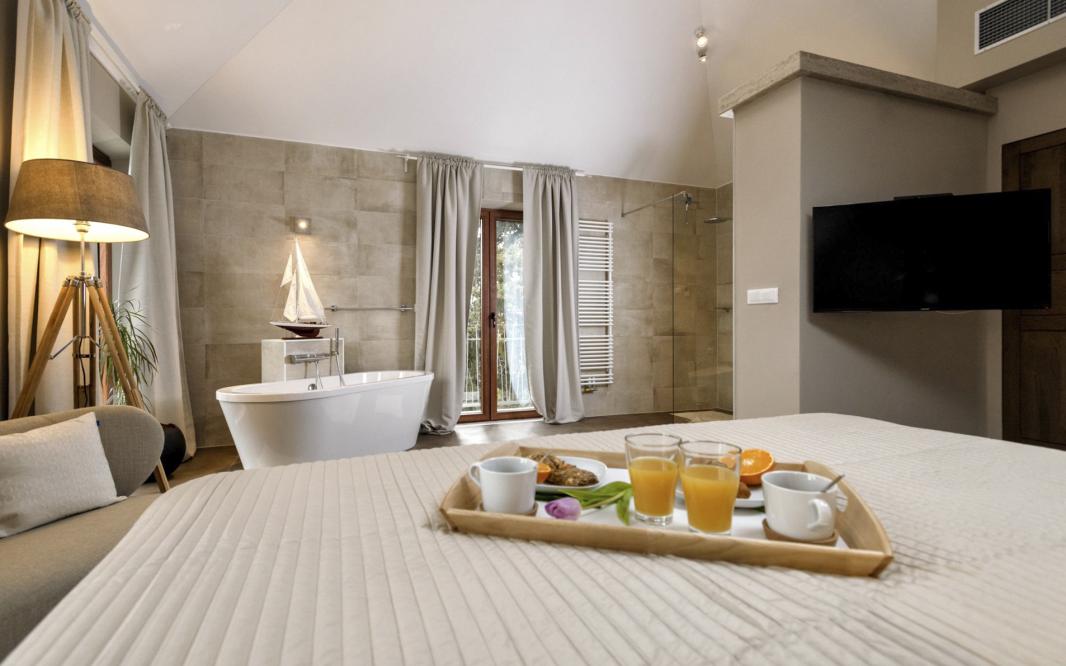 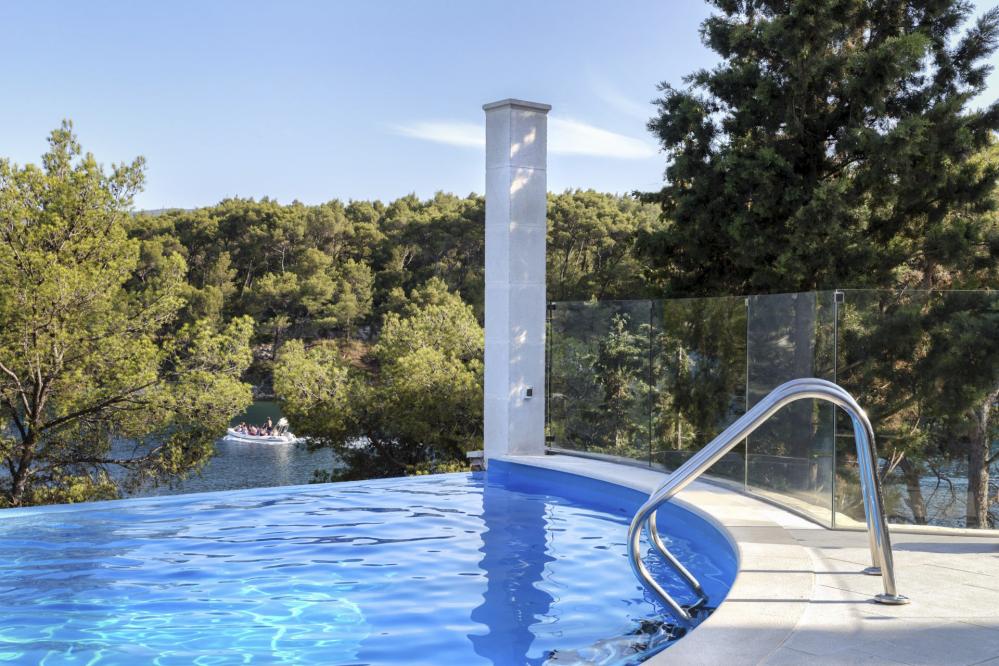 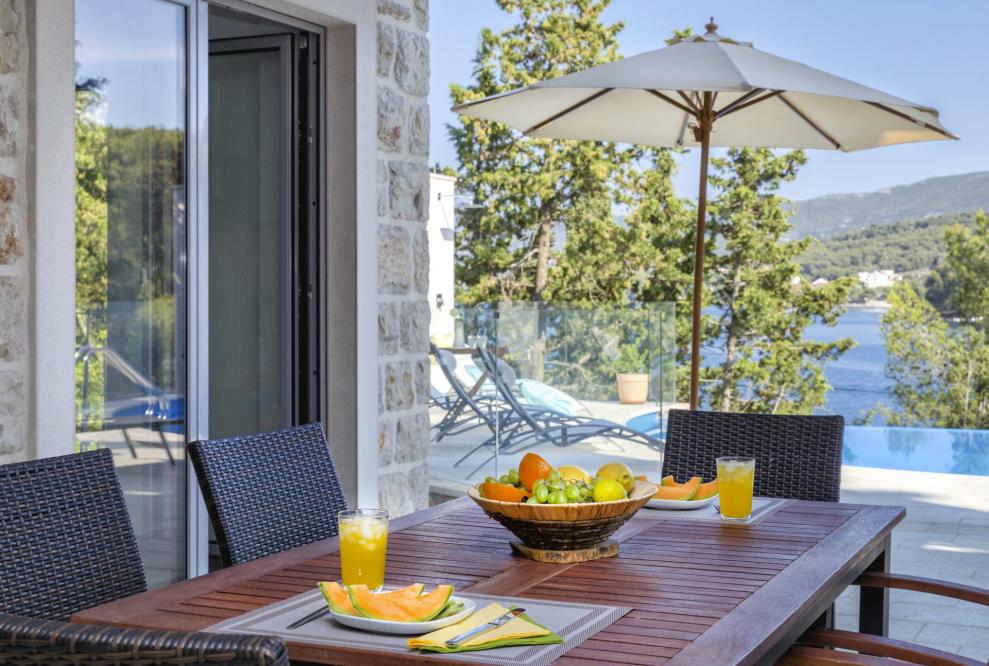 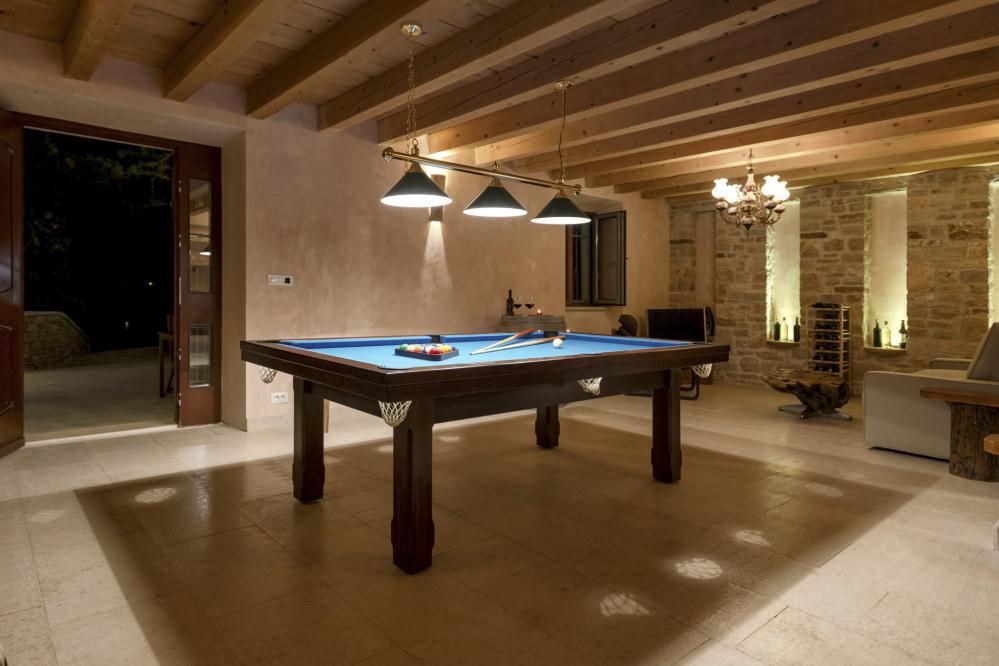 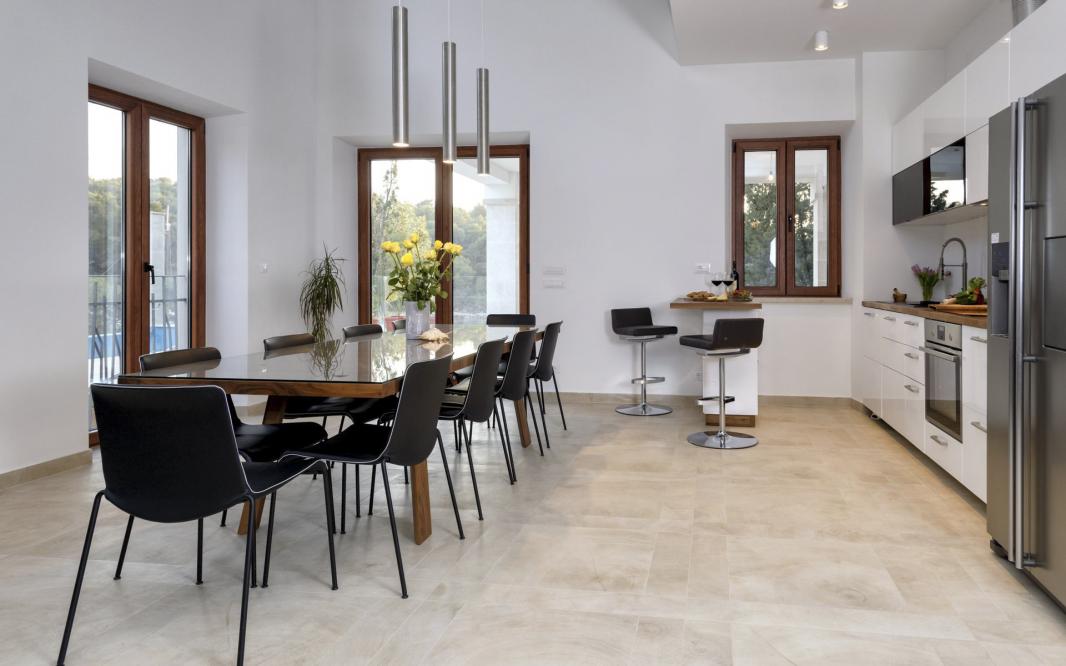 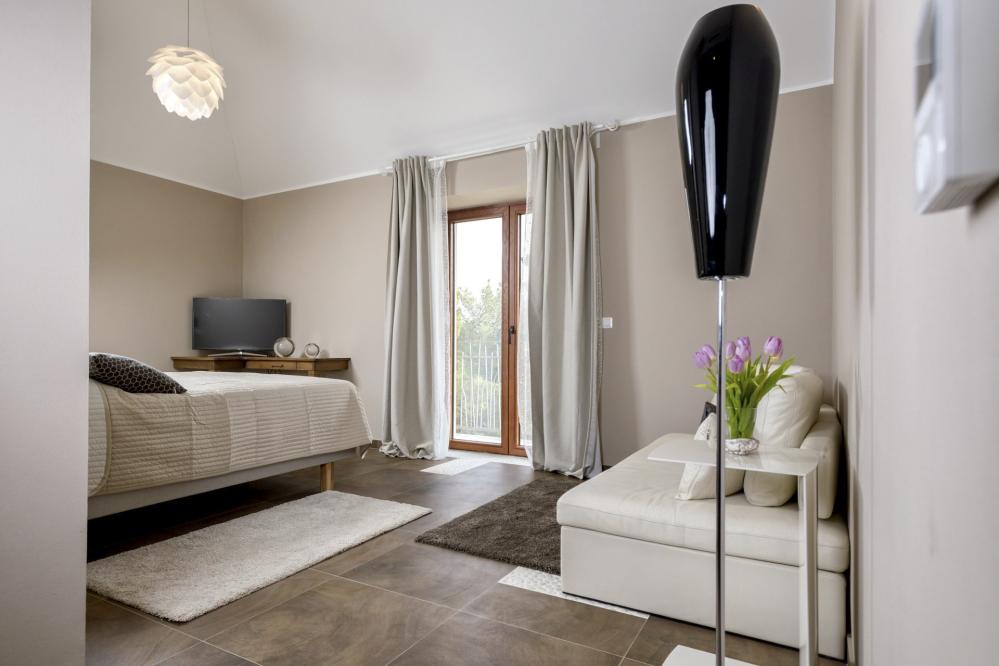 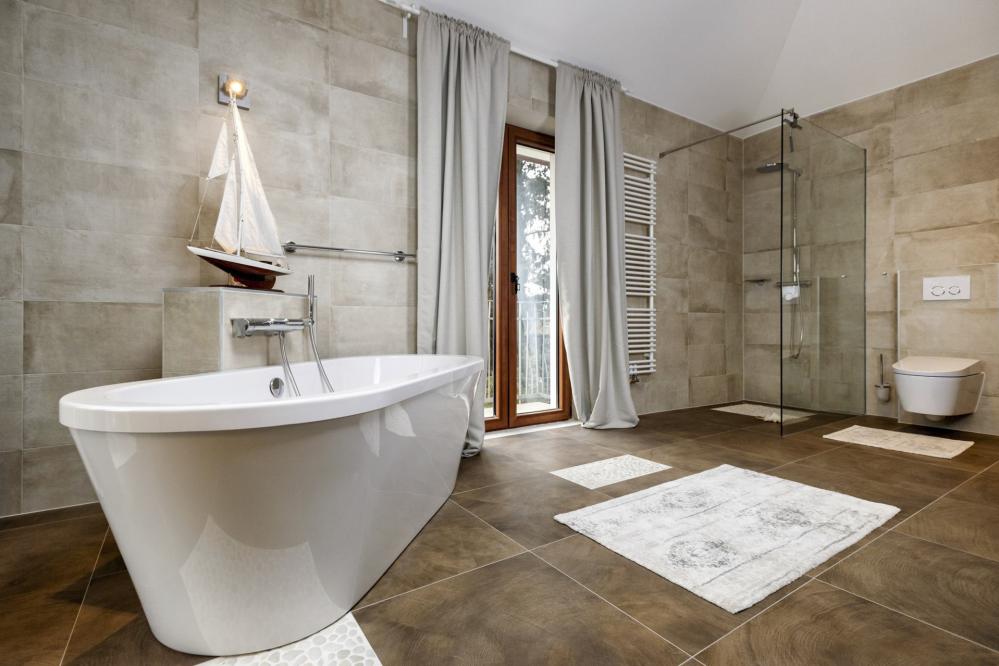 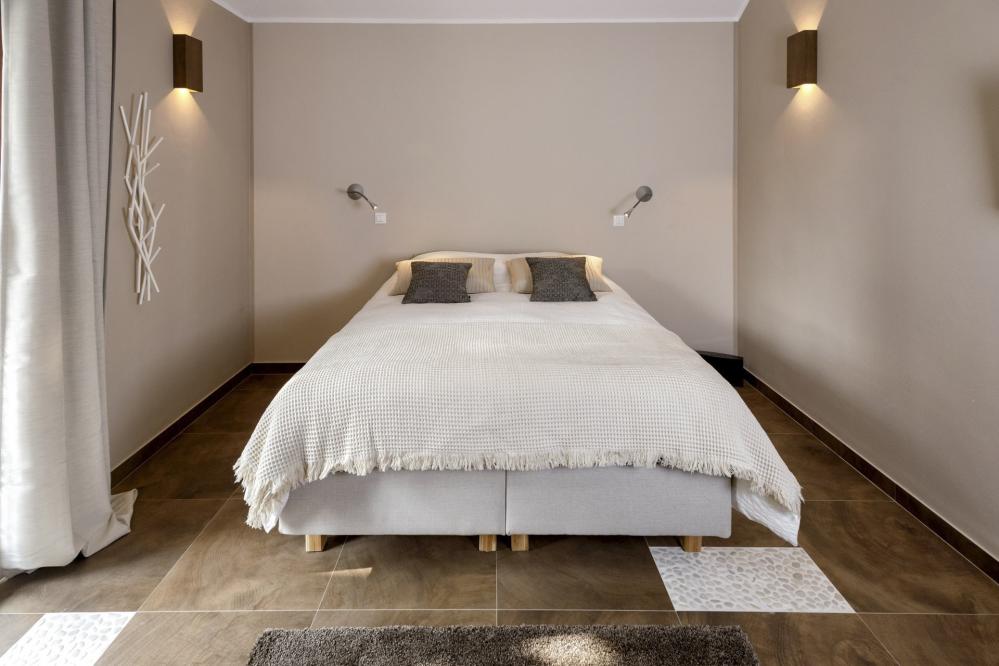 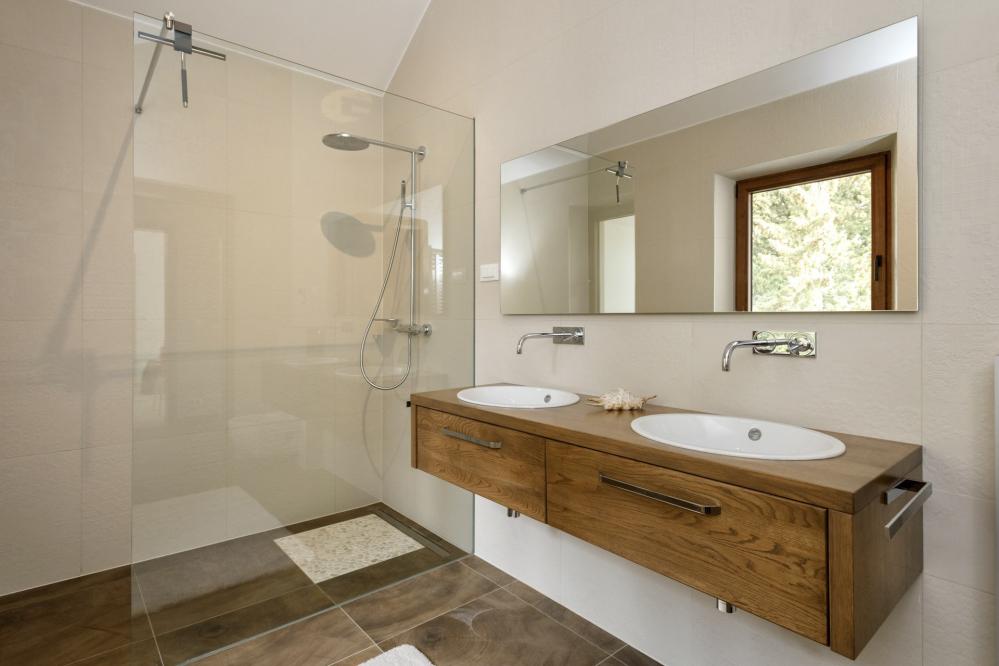 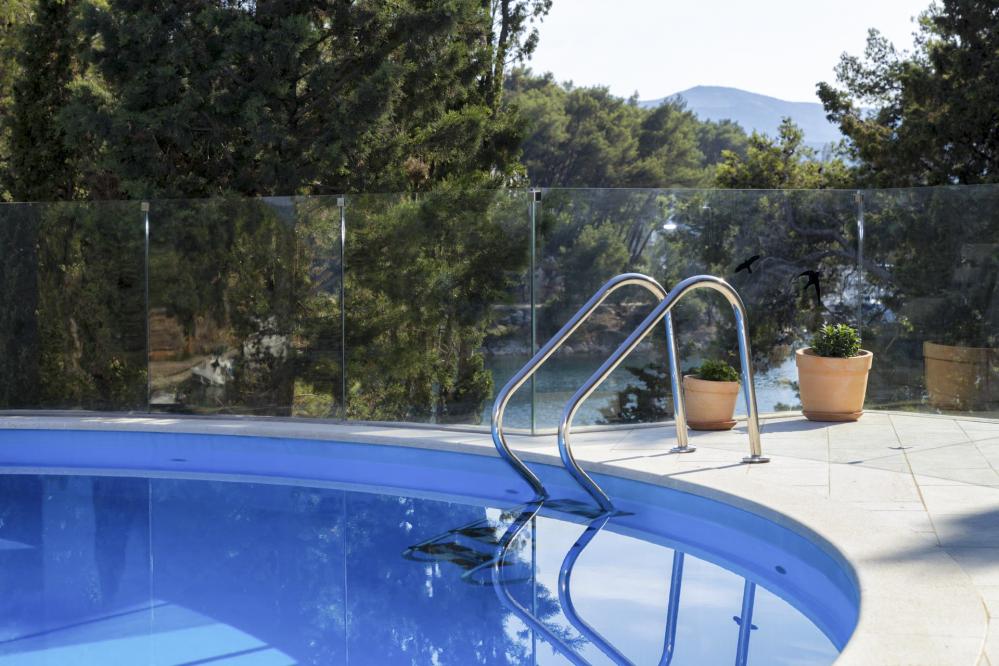 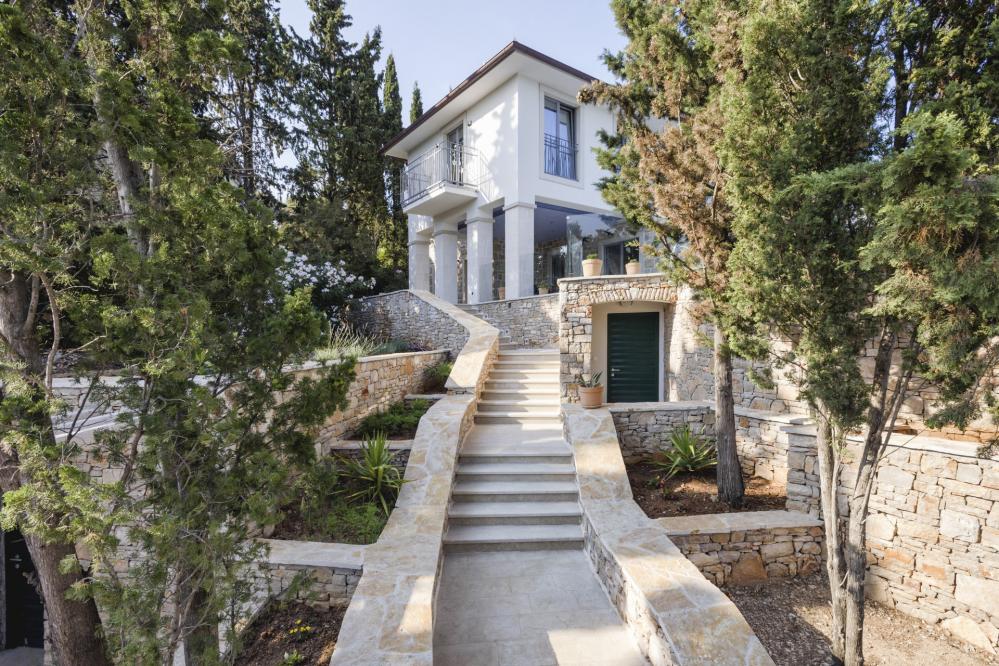 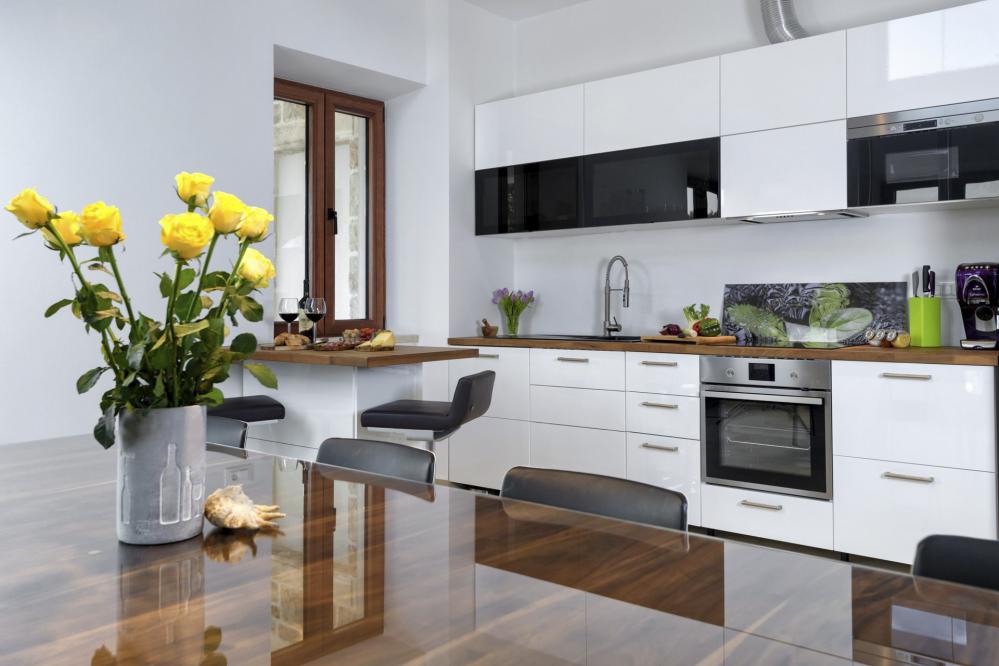 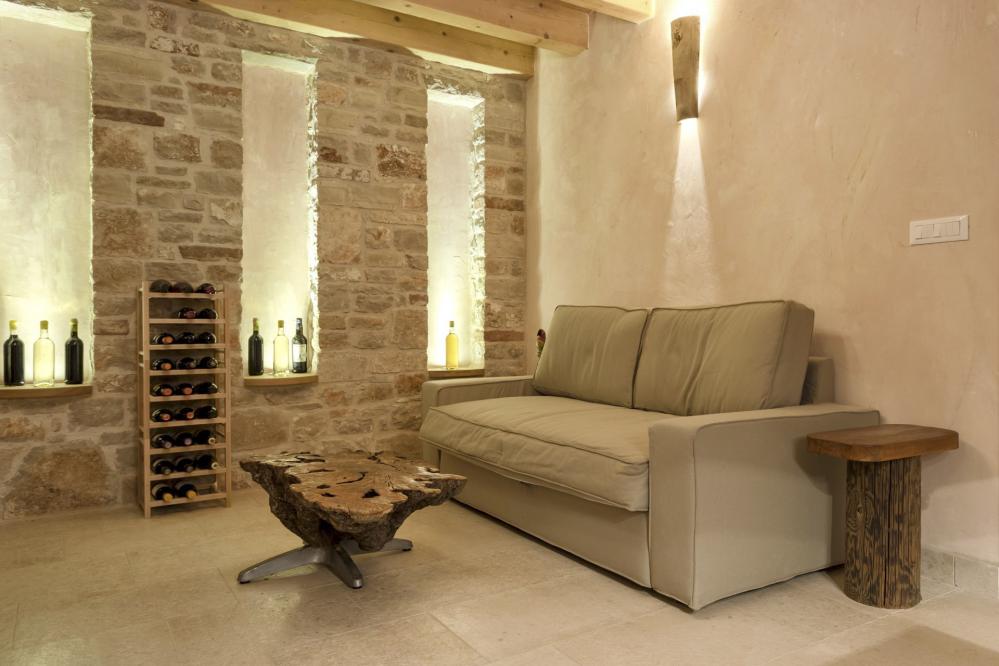 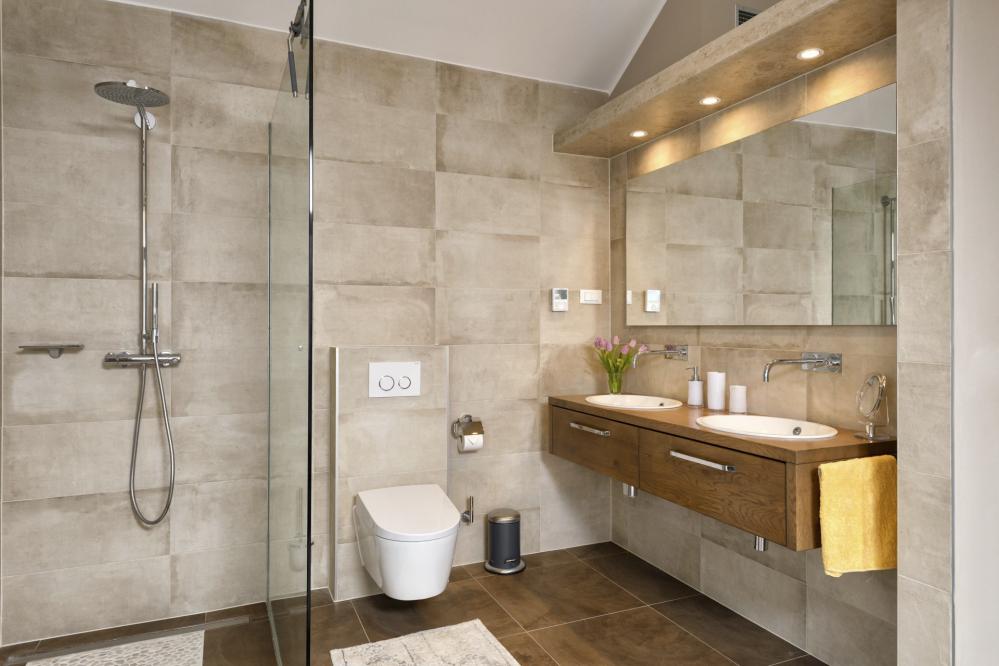 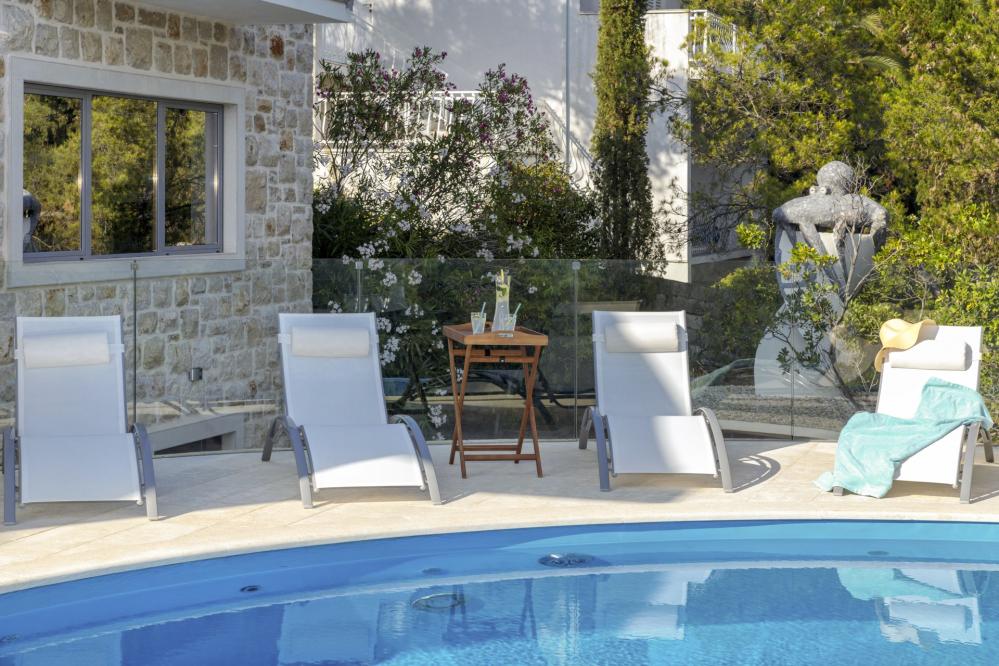 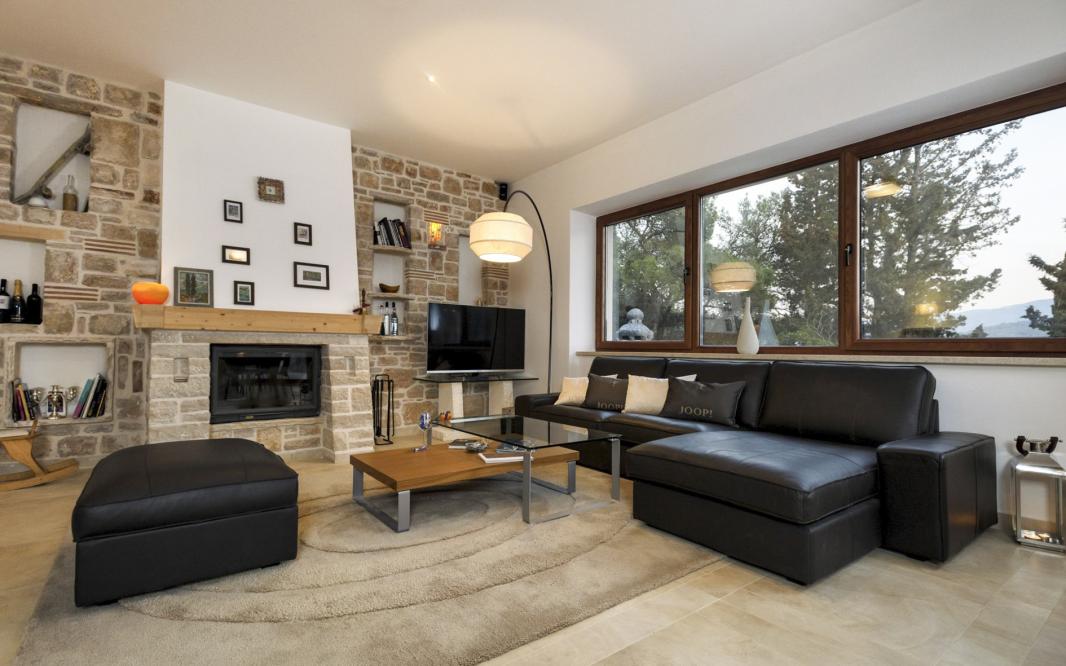 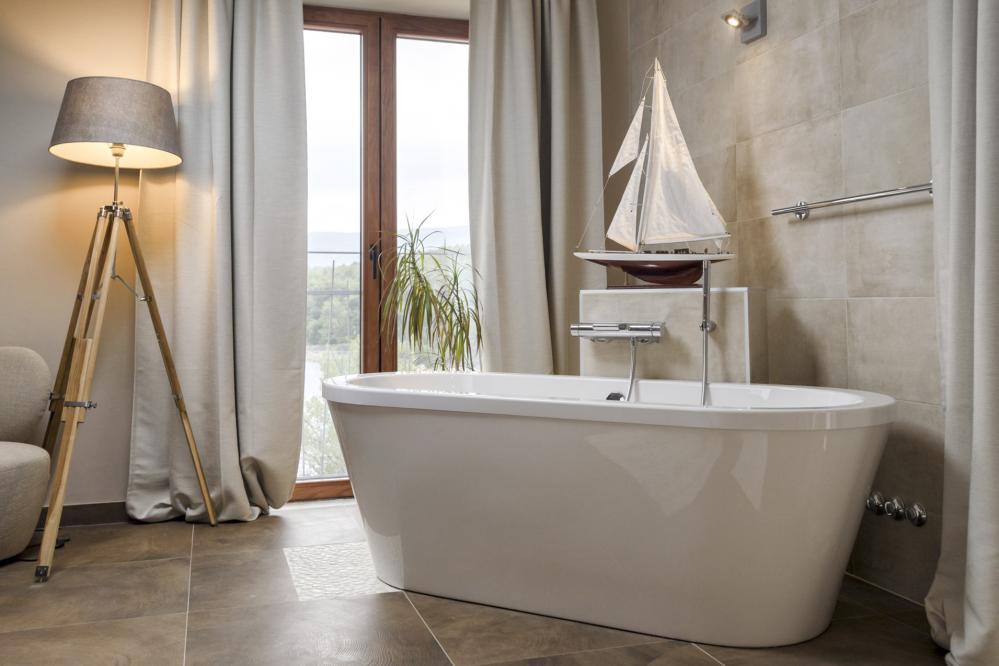 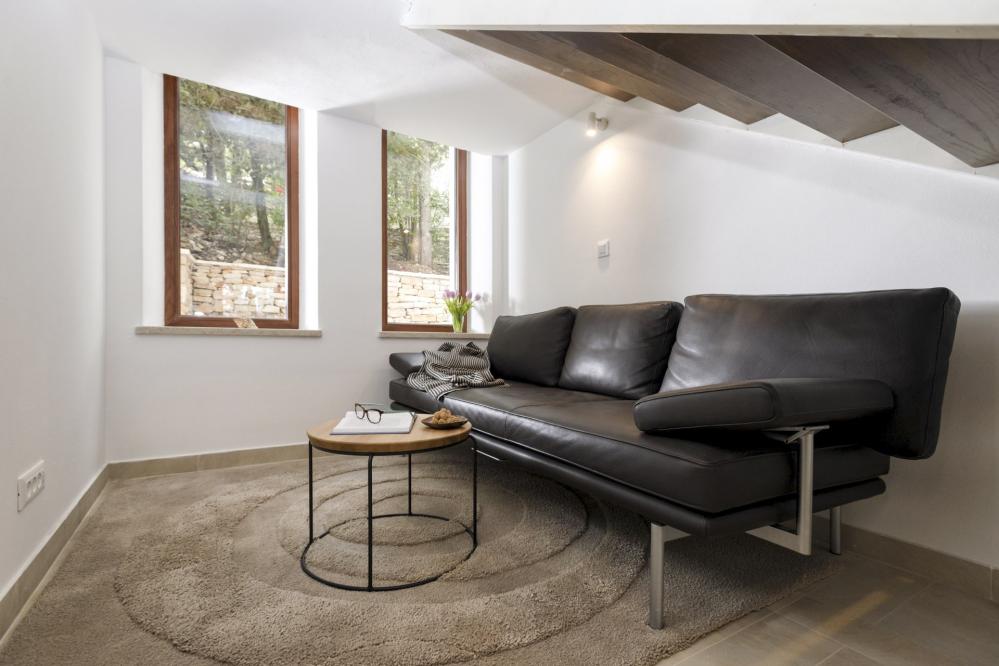 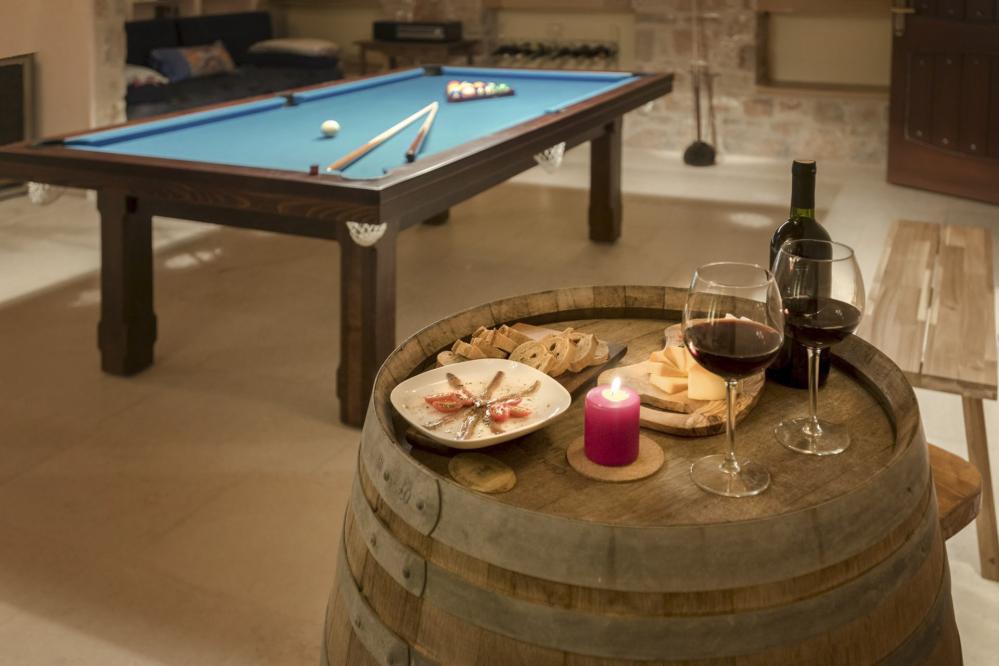 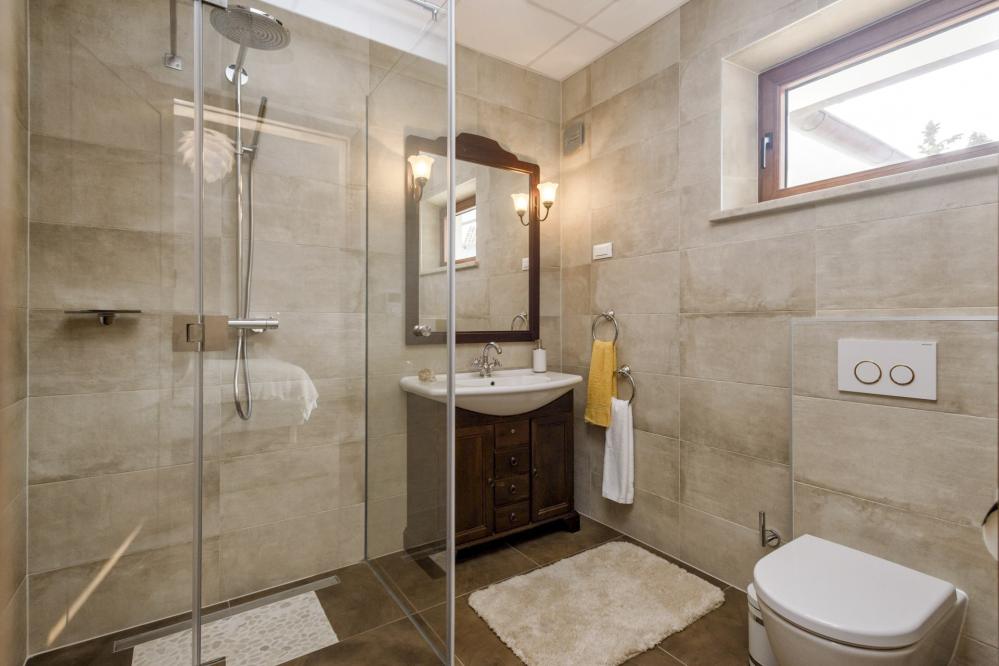 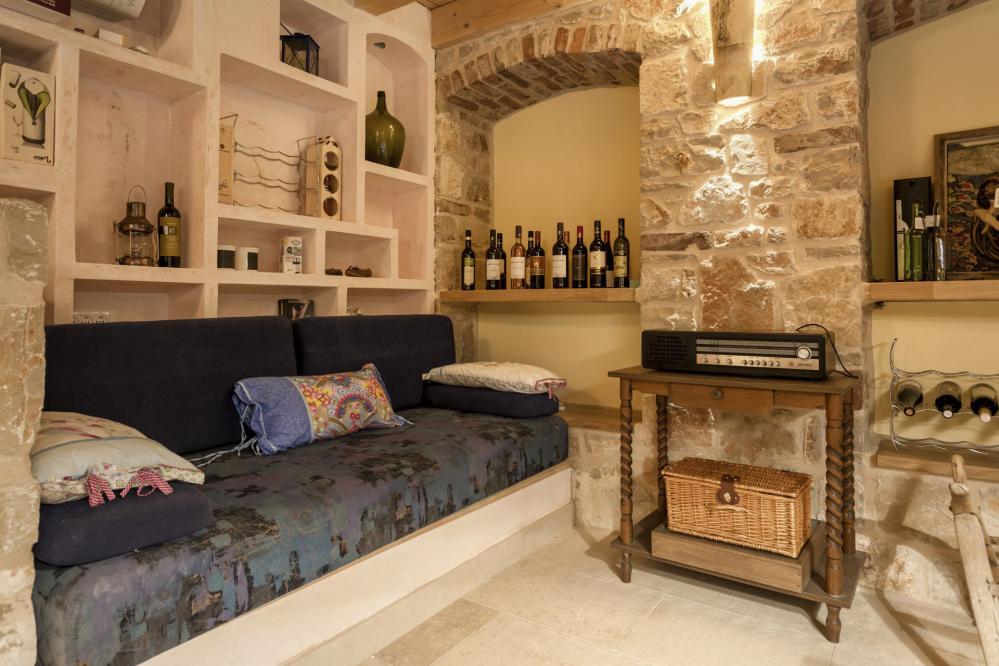 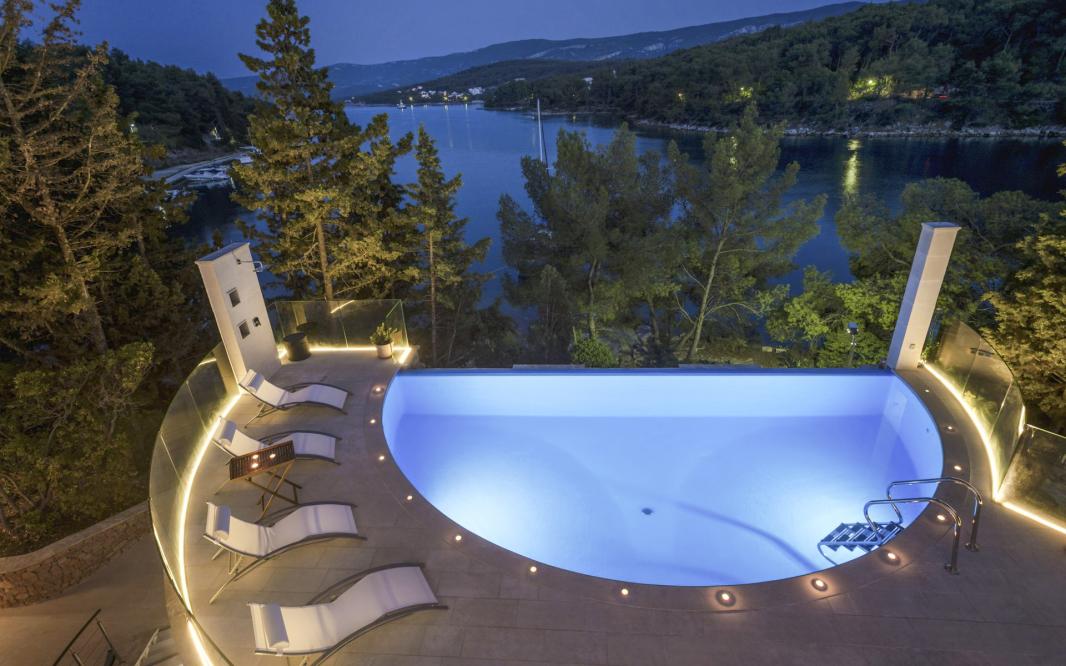 In Jelsa on the northern coast of the Croatian island of Hvar, Villa Enigma is a magnificent villa which can accommodate up to 10 guests. Its heated outdoor poo...

In Jelsa on the northern coast of the Croatian island of Hvar, Villa Enigma is a magnificent villa which can accommodate up to 10 guests. Its heated outdoor pool and terrace offer lovely views down to the sea, with the beach just a short stroll away.

This villa provides a great balance of inviting indoor and outdoor spaces, so there is always a place to suit your mood. The stunning, semi-circular pool looks right out to sea and is lined with sun loungers and an outdoor shower.

A lovely covered dining area with a barbecue is ideal for eating and drinking, whatever the time of day and the villa’s rustic good looks are the perfect backdrops.

High ceilings lend a feeling of openness to the impressive interior living area, which includes a dining table, bar and a well-equipped kitchen. You have another stunning view of the ocean to enjoy here.

Beneath the infinity pool lies another treat, in the shape of a Finnish sauna, and wine buffs have a good selection of vintages to try in the billiards room – a nice chillout space with comfy sofas, rugged bare stone walls and wood beams.

The four bedrooms and bathrooms are similarly aesthetically pleasing, with free-standing, in-room bathtubs positioned to take advantage of the beautiful views. Large, flat-screen TVs and high-quality soft furnishings add yet more to these charming rooms.

The island is easily accessible from the mainland, with regular crossings from Split to the island’s port of Stari Grad, around 10km from Jelsa. Hvar is known to be one of the sunniest spots on the Adriatic, as well as one of the coolest – the island is a popular celebrity getaway, with large swathes of it pretty deserted.

You will find plenty going on around the centres, however, with great nightlife and top-notch cuisine among the many reasons to visit.

Villa Enigma is a luxury villa is situated in a small and quiet village on the island of Hvar. There are 4 bedrooms and 4 bathrooms, and it can accommodate up to 8 (+2) guests.

Characterised by its lavender fields, olive groves, secluded beaches and pretty harbours, it’s no surprise that Hvar is considered a jewel among the Croatian islands.

It is even ranked as one of the world’s most beautiful islands, and its reputation is such that it has become something of a celebrity hideaway, although you don’t need to be a star to experience Hvar’s warm hospitality.

Hvar enjoys a mild climate year-round, and its natural beauty is evident all over the island, much of which is relatively quiet. The port town which shares the island’s name is the central hub of activity, but you can still experience peaceful walks along the waterside and chilled out days on the café terraces by the harbour.

Most of the island’s nightlife centres on Hvar, with clubs like Carpe Diem and Veneranda – where Prince Harry once memorably partied – drawing in the younger crowds. If you prefer quieter bars, you may prefer to head to Jelsa or Stari Grad.

If it’s beaches you seek, Hvar won’t disappoint. There are numerous choices, among them the bay of Milna, around 4km from Hvar Town, and Mekićevica, even closer. The pine forests and vineyards around Milna make this a very picturesque spot indeed, and you can get there by boat from Hvar.

To get a sense of Hvar’s history, there’s no better place than Stari Grad, the island’s oldest town. The narrow streets and quaint squares are full of character and make for pleasant walks once you have explored the harbour and Lanterna beach.

The furthest point east on the island, Sucuraj, is another well-preserved town, and it serves as a departure point for the mainland, with regular crossings to Drvenik, around 30 minutes’ drive from the outstanding Makarska.

It would be hard not to love Villa Enigma, with its enchanting setting and incredible facilities –...

It would be hard not to love Villa Enigma, with its enchanting setting and incredible facilities – there are the pool and sauna for a start, which are a treat for all ages, plus there’s tons of tech inside with TVs in every bedroom and Wi-Fi.

The natural beauty of the local area adds an extra dimension to outdoor activities, and the stunning beaches around the island are sure to meet with the kids’ approval too. 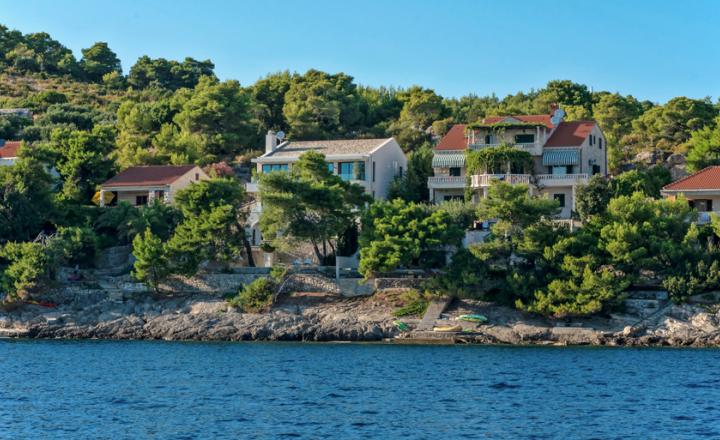 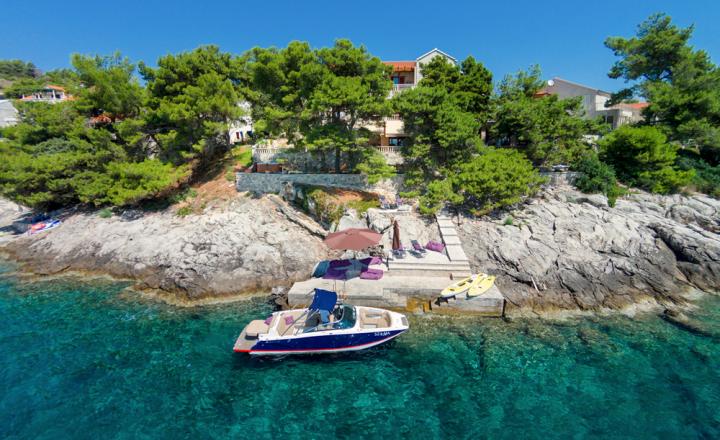 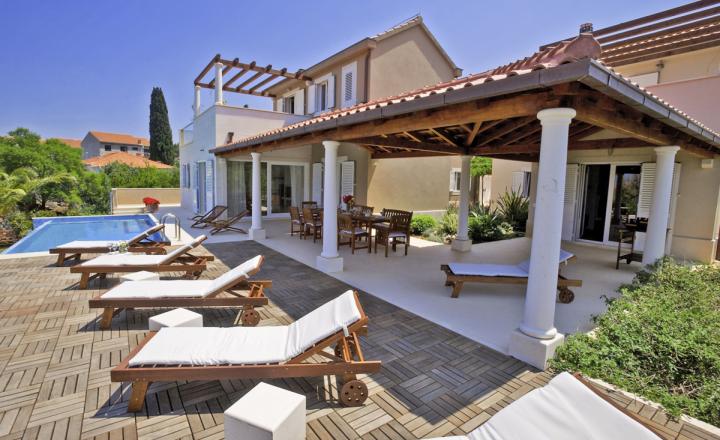 Ask a question about Villa Enigma