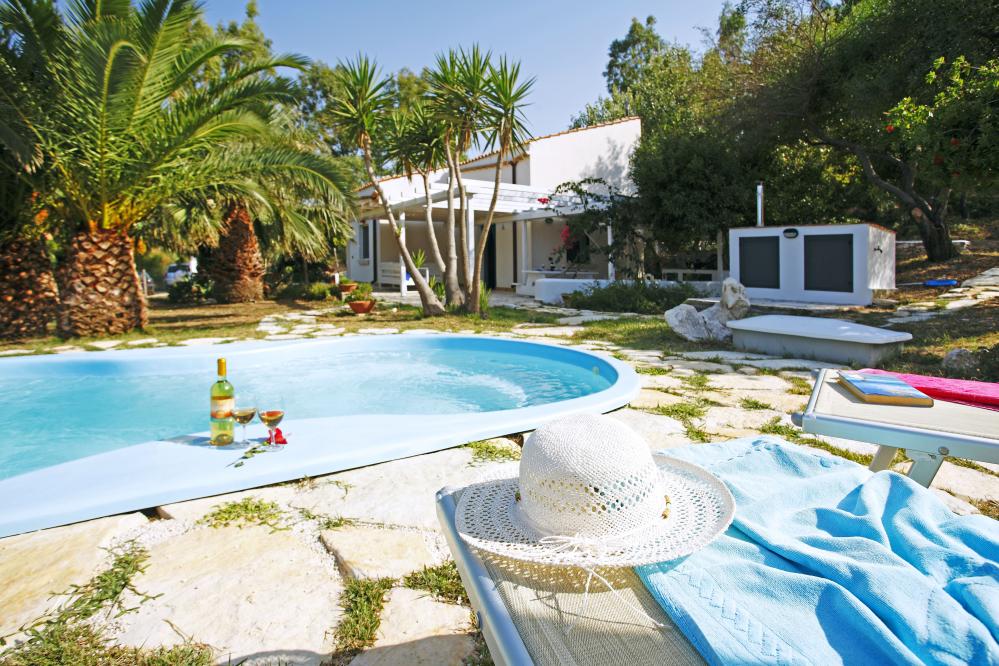 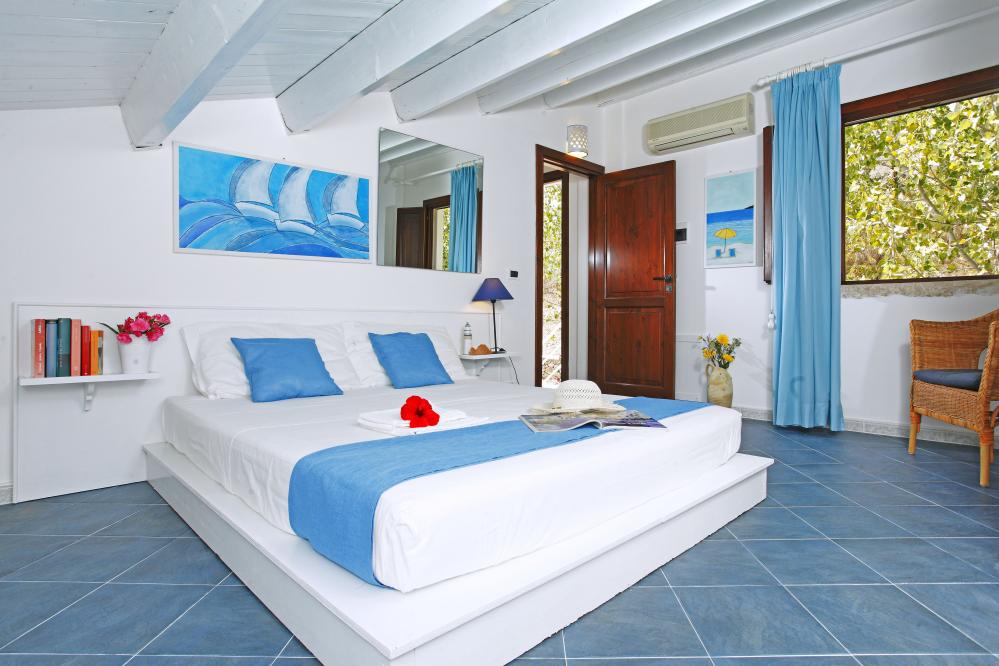 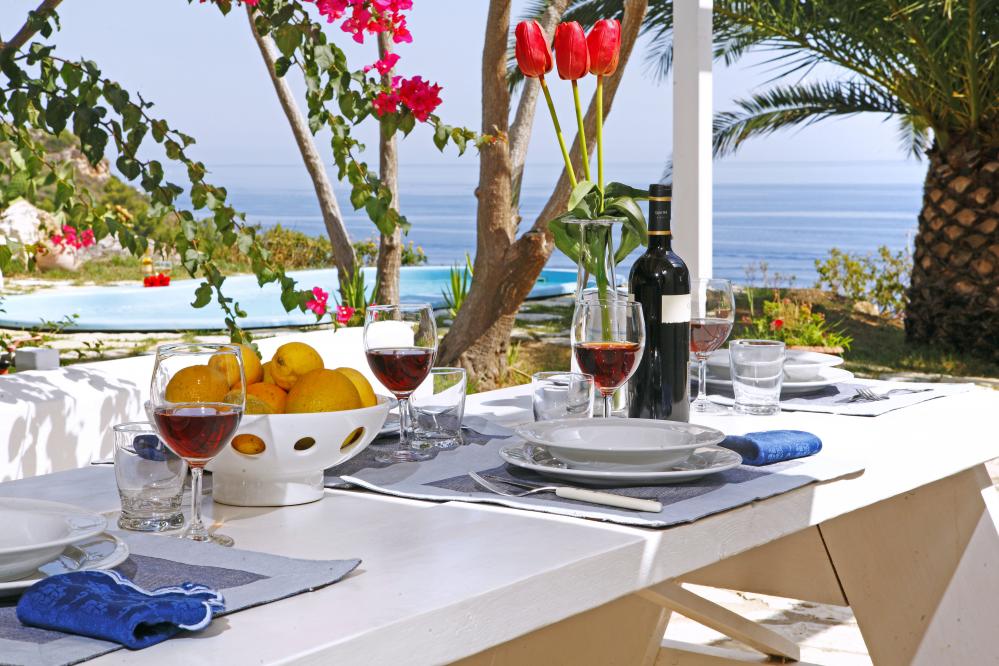 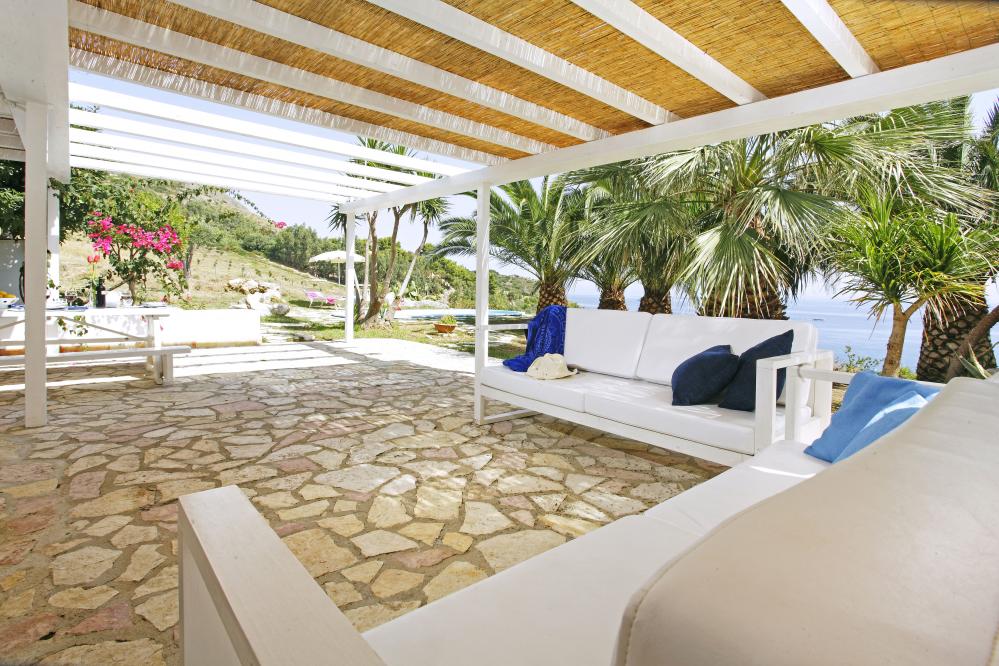 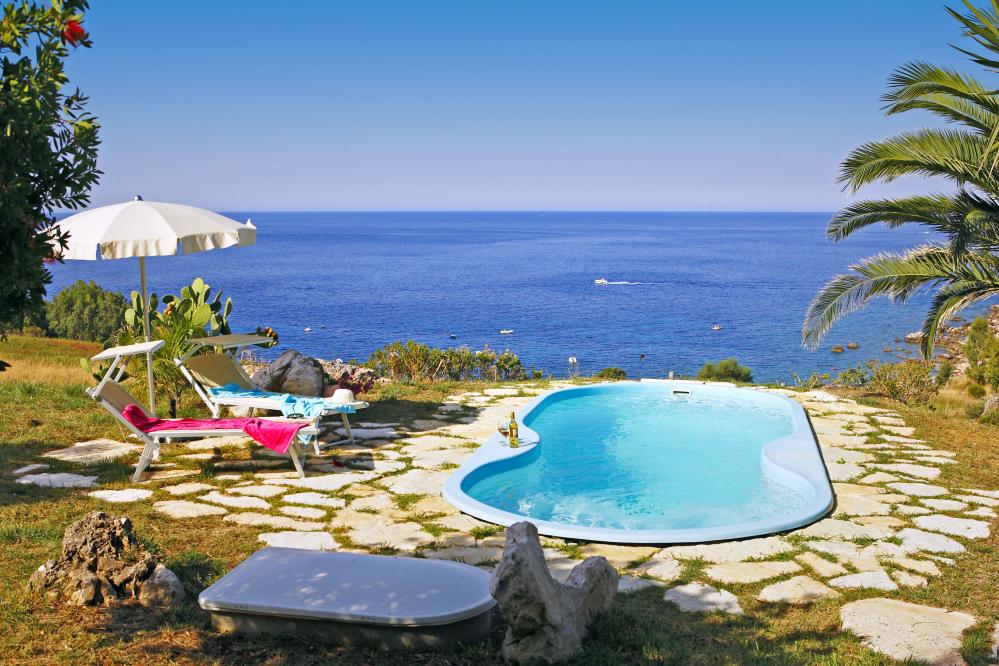 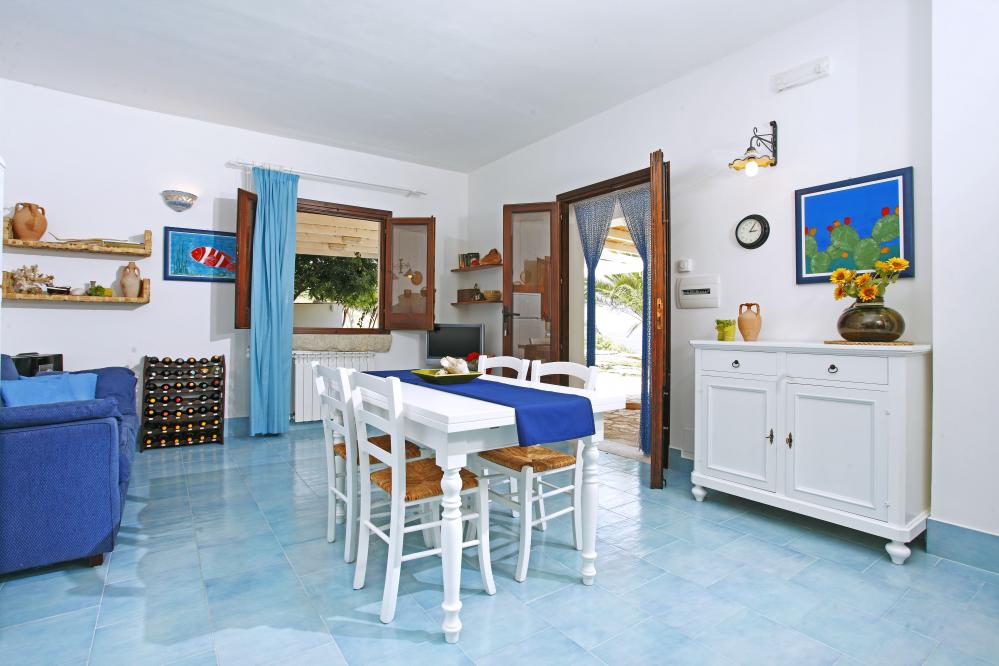 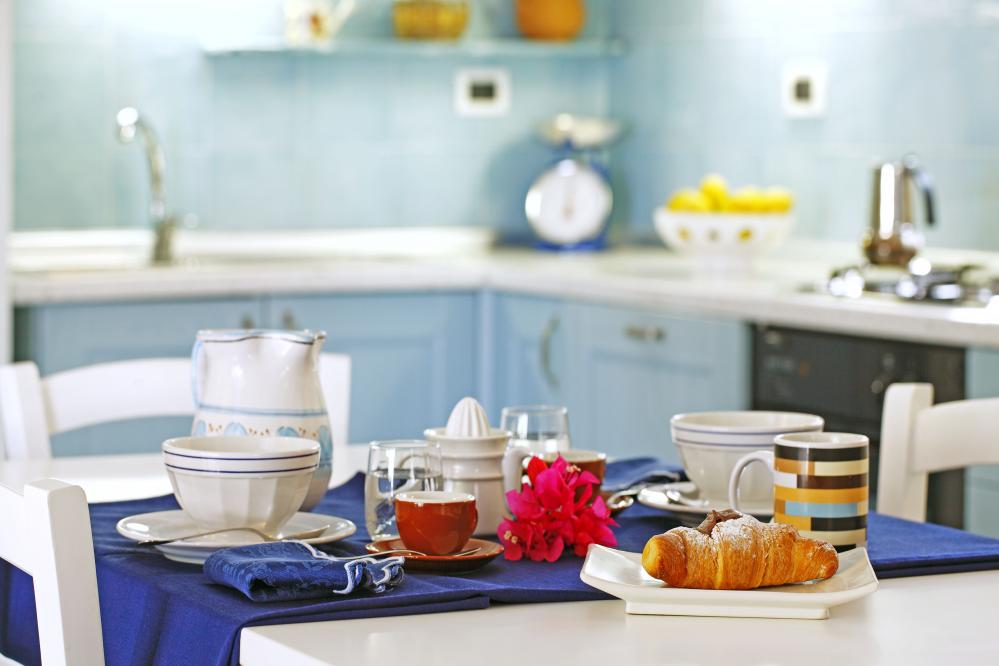 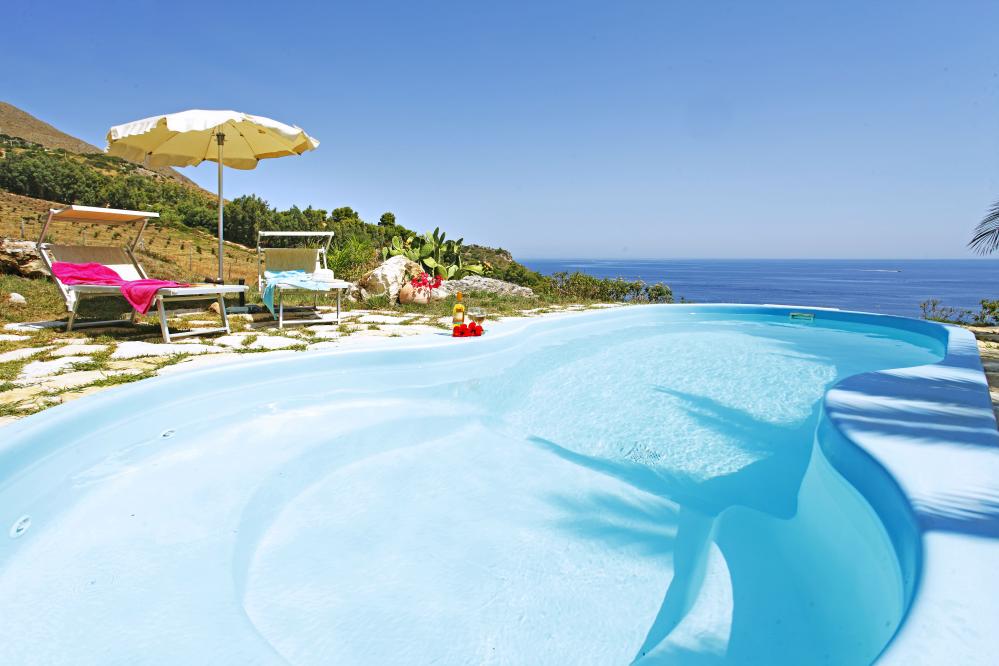 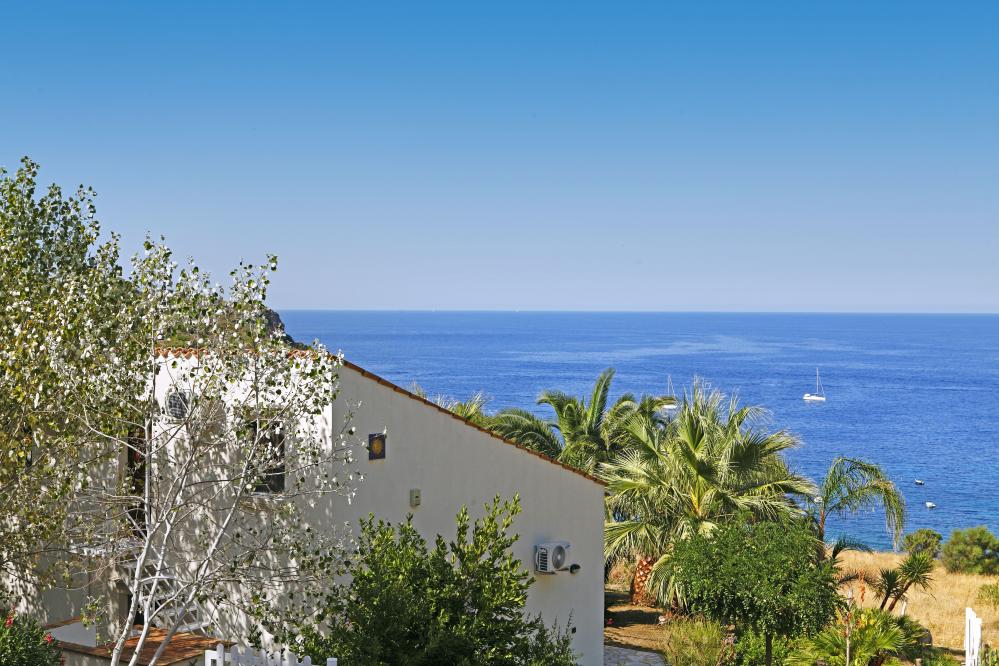 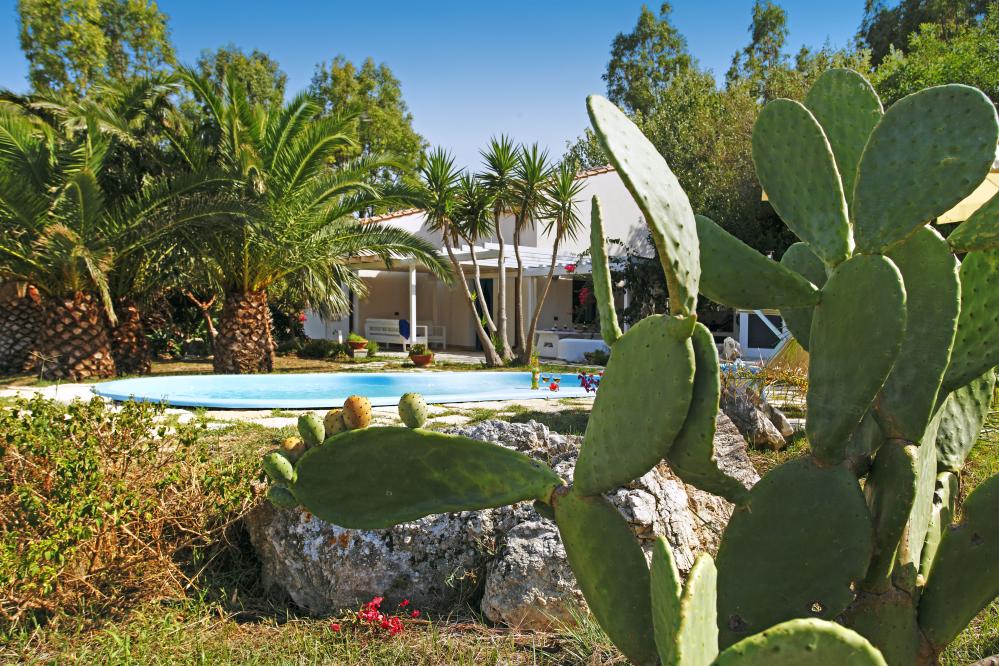 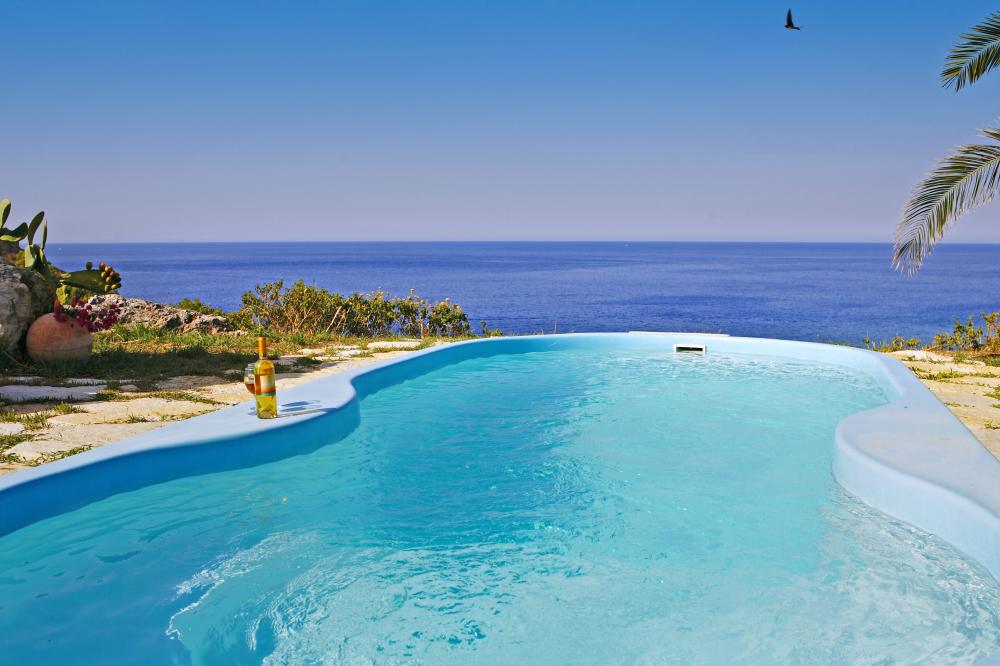 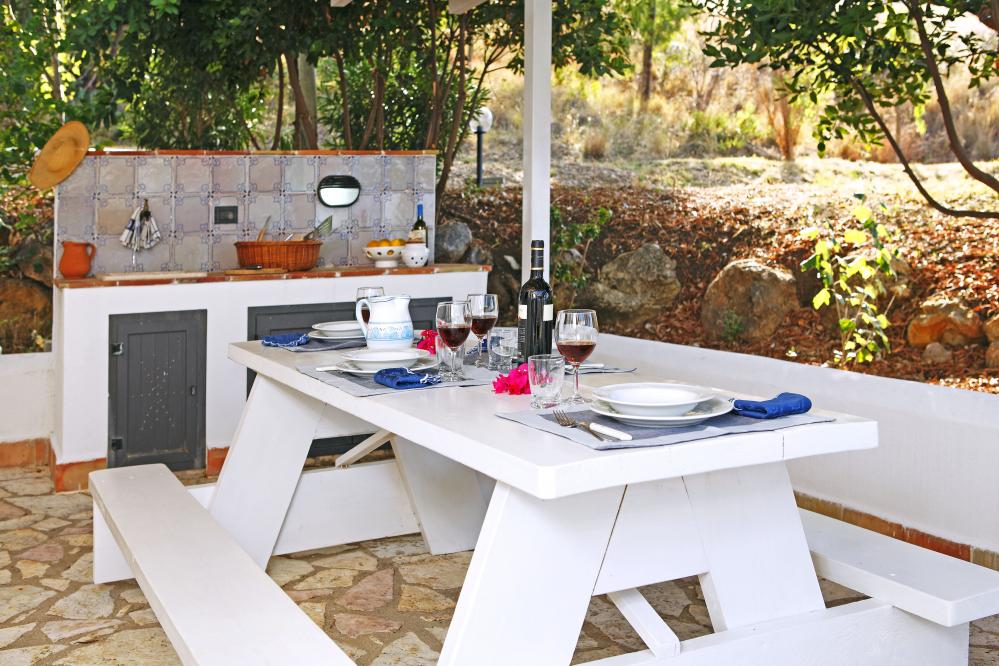 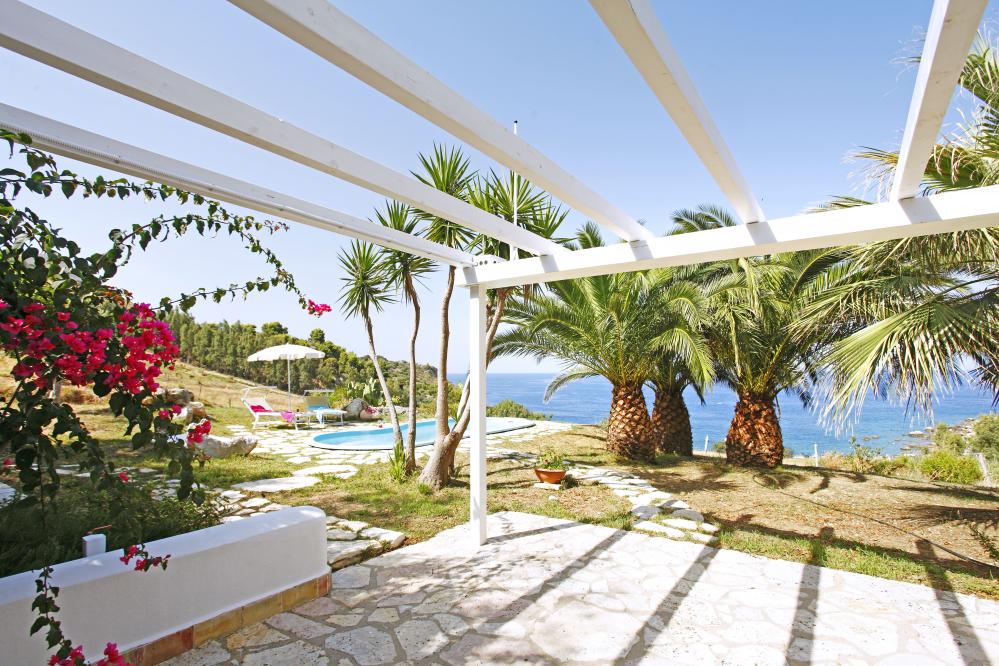 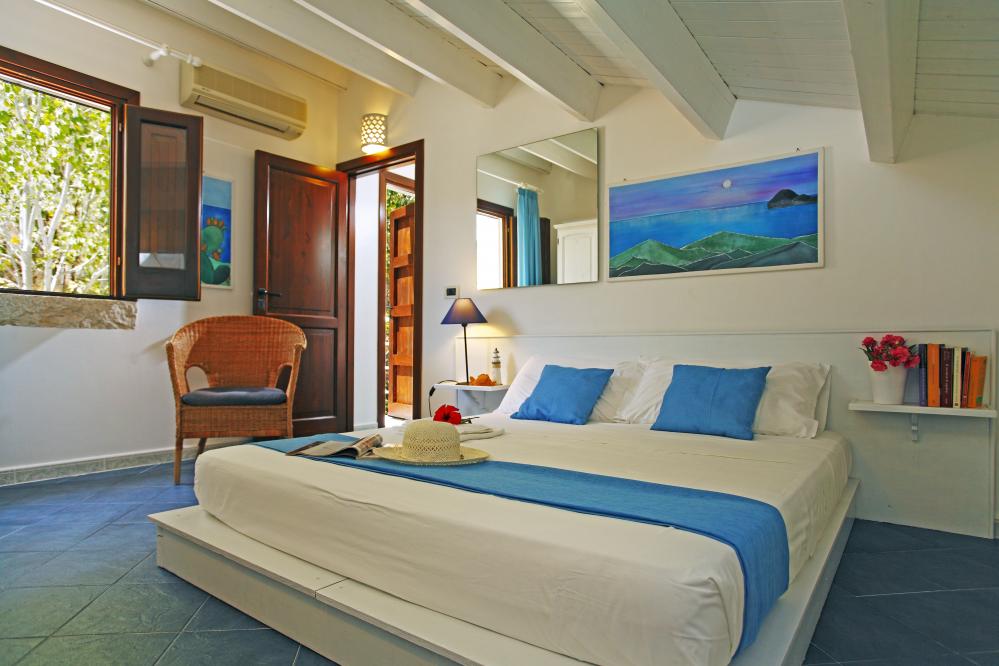 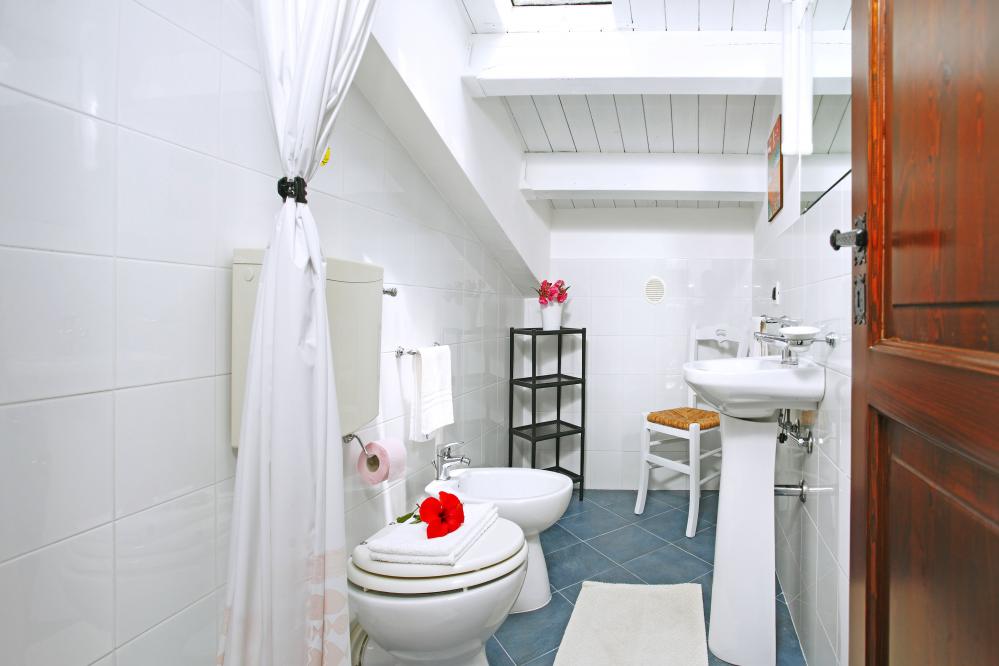 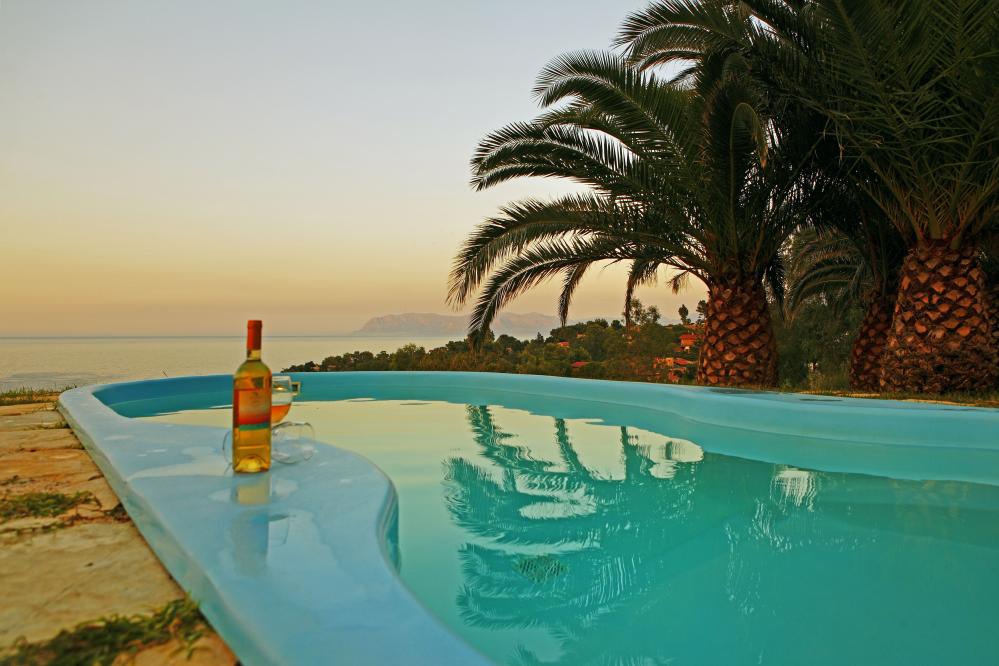 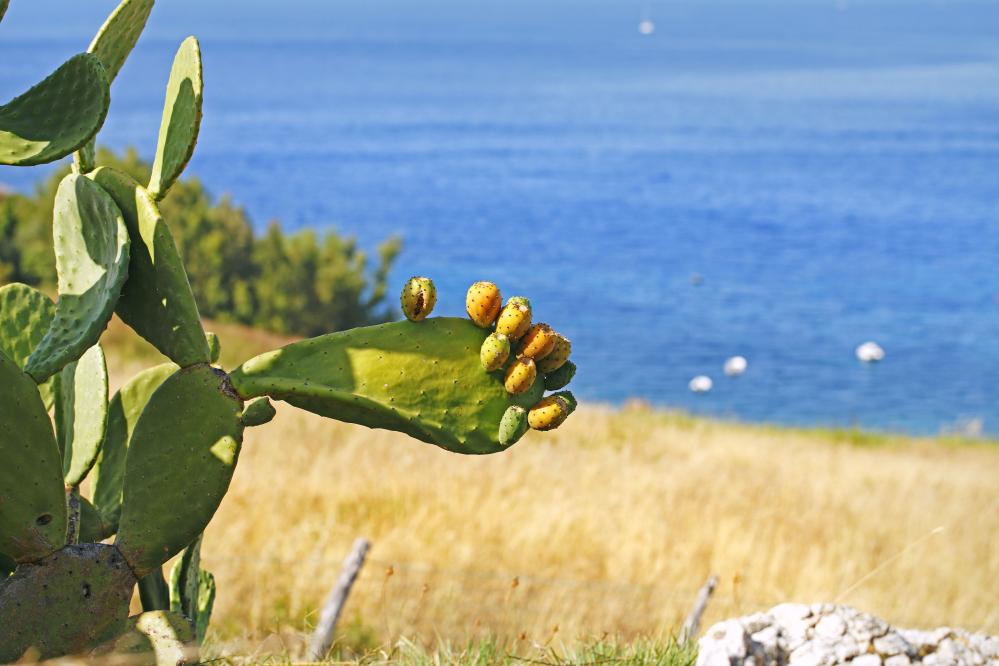 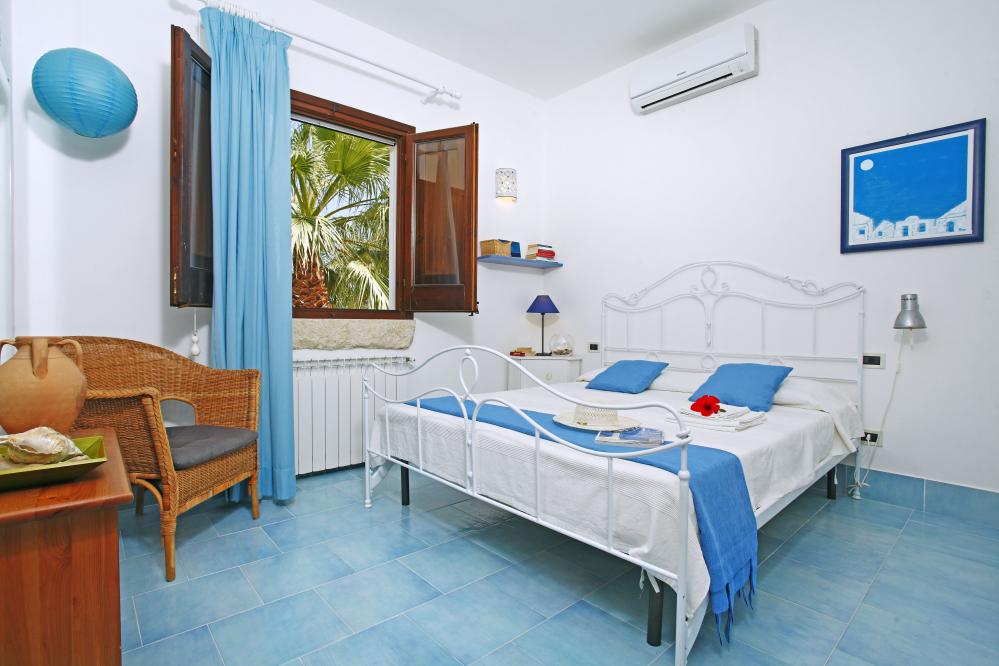 Villa Gessica is a traditional house which has been completely renovated. It lies in the valley of Mazzo di Sciacca which is by the delightful town of Scopello....

Villa Gessica is a traditional house which has been completely renovated. It lies in the valley of Mazzo di Sciacca which is by the delightful town of Scopello. Just a few kilometres away from Lo Zingaro Nature Reserve, the property is as ideally situated for a holiday full of exploration and adventure as it is for one which is set around the pool and local wines!

The interior is bright and welcoming, the décor often reminiscent of the sea which lies beyond. There are three tastefully furnished double bedrooms and access to the first floor is via an external staircase which offers an extra element of independence for groups traveling together.

Outside is magnificent- white walls and red terracotta tiles compliment the vivid Mediterranean garden, which is lush and expansive. A BBQ equipped veranda provides a spacious area in which to relax outdoors, lined by palms and pomegranates; with stunning views of the turquoise sea beyond. The private pool offers a hydro massage function and similarly breath-taking views.

West of Palermo, just after Castellammare del Golfo, the coastline becomes rugged and spectacular. Part of this coastline is Lo Zingaro Nature Reserve, which stretches for 7km between the lovely village of Scopello in the east to near San Vito Lo Capo in the west. Created in 1981, this park and its surrounding areas are one of the most beautiful parts of western Sicily.
Lo Zingaro has been shaped by nature to dramatic effect. Cliffs drop precipitously into the azure sea and the series of pebbly beaches hidden amongst a myriad of coves are as lovely as you can find in the Mediterranean. The park attracts both walkers and bathers alike and in the summer, when many beaches are overcrowded, it is a good idea to head for Lo Zingaro, walk for half an hour and find relative isolation on a virtually deserted beach.

At the edge of the Zingaro Nature reserve lies the ancient Scopello (from the Greek word "Skopelos" that means "cliff”), a small, pleasant village that was built around a 16th-century “baglio”, on the site of a former Moorish hamlet. As you will discover, this nice courtyard is now the heart of the village. Here, ceramics and souvenirs shops, as well as boutiques, cafés and restaurants lie under the shadow of a large eucalyptus. On the road to Trapani one can spot the idyllically situated Greek temple of Segesta, one of the Mediterranean’s finest archaeological sites.

Castellammare del Golfo is an attractive seaside town between Palermo and Trapani. The historic fishing port has a picturesque location, below steep mountain slopes; with a handsome curved harbour at the foot of a small headland topped with a castle. There are still small working fishing boats, and you may see fishermen mending their nets on board, or selling the day's catch. Castellammare has a pretty little central park, opposite the elegant town hall on Corso Mattarella. The park has a small children's play area, shady trees and benches views over the harbour.

Ask a question about Villa Gessica