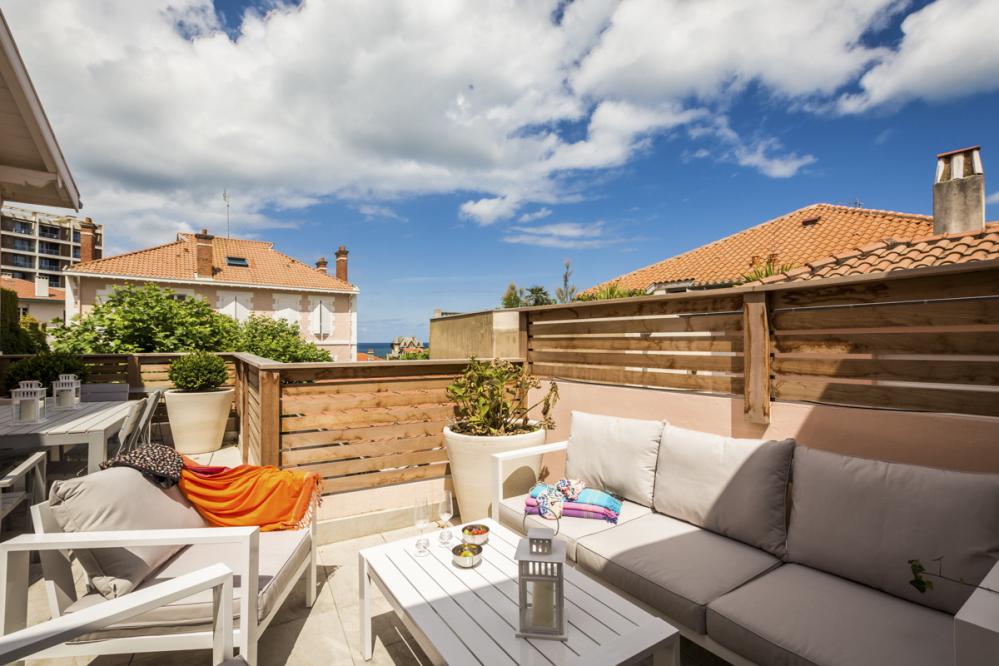 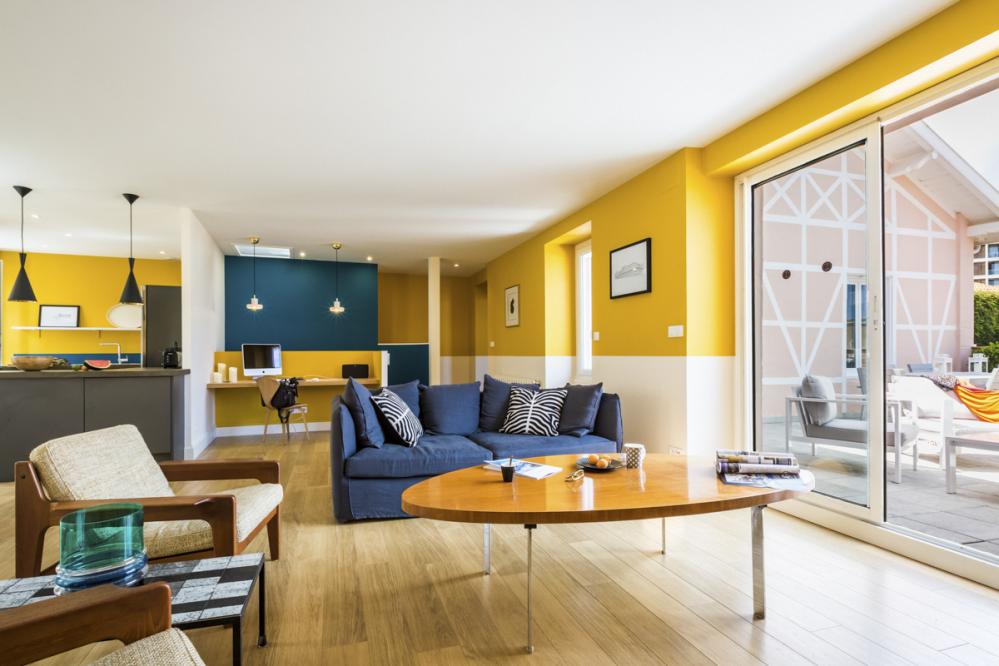 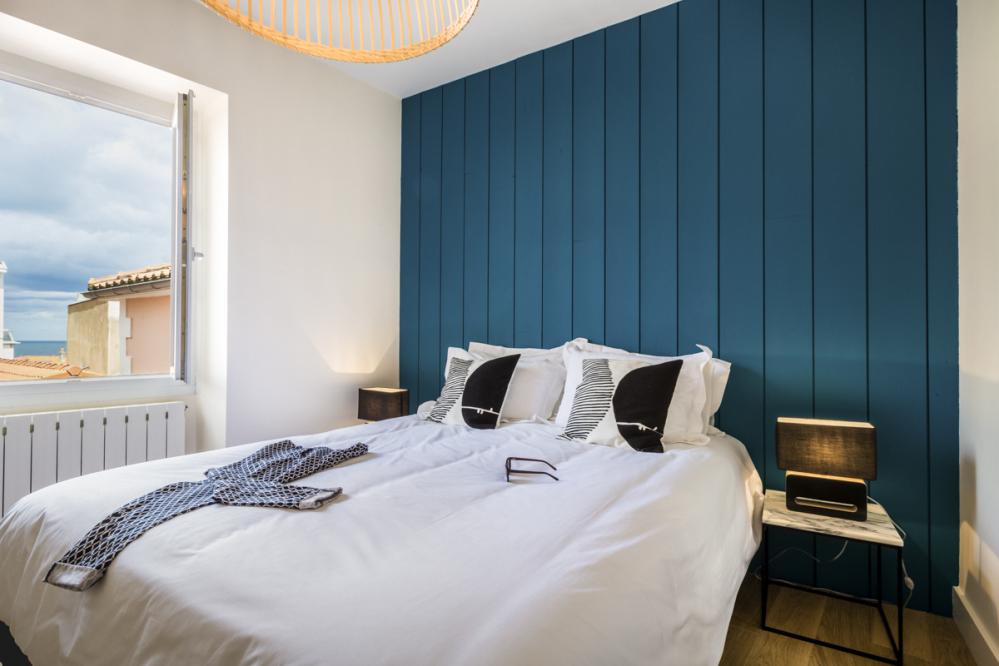 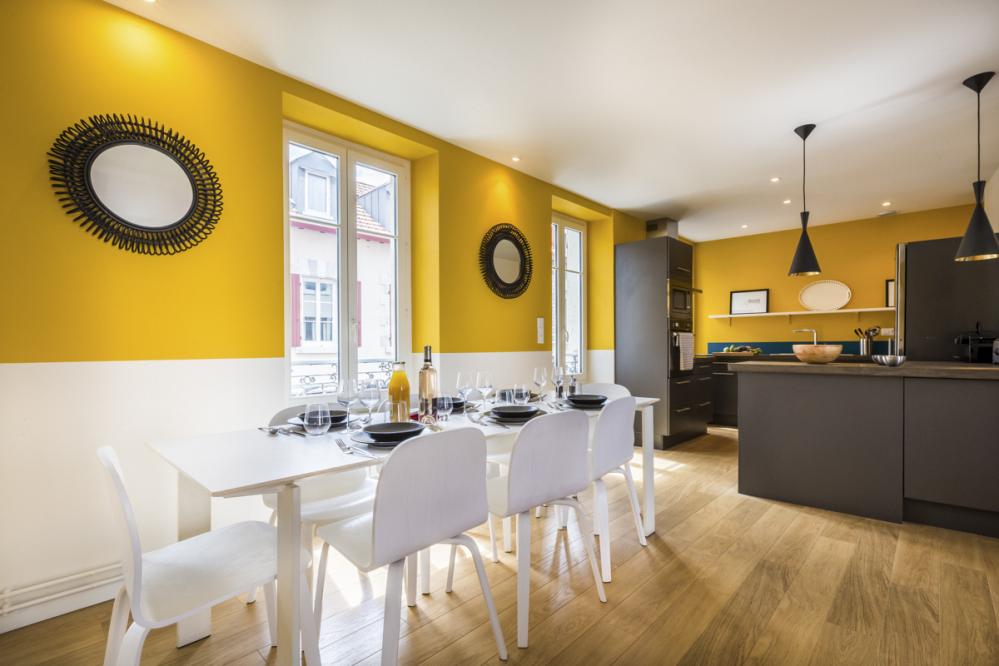 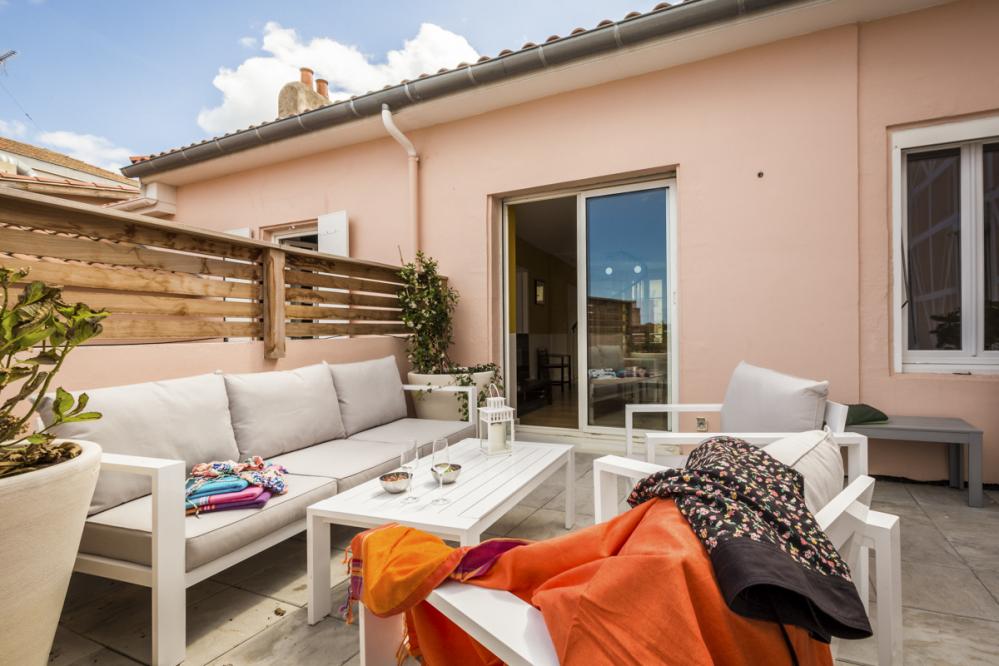 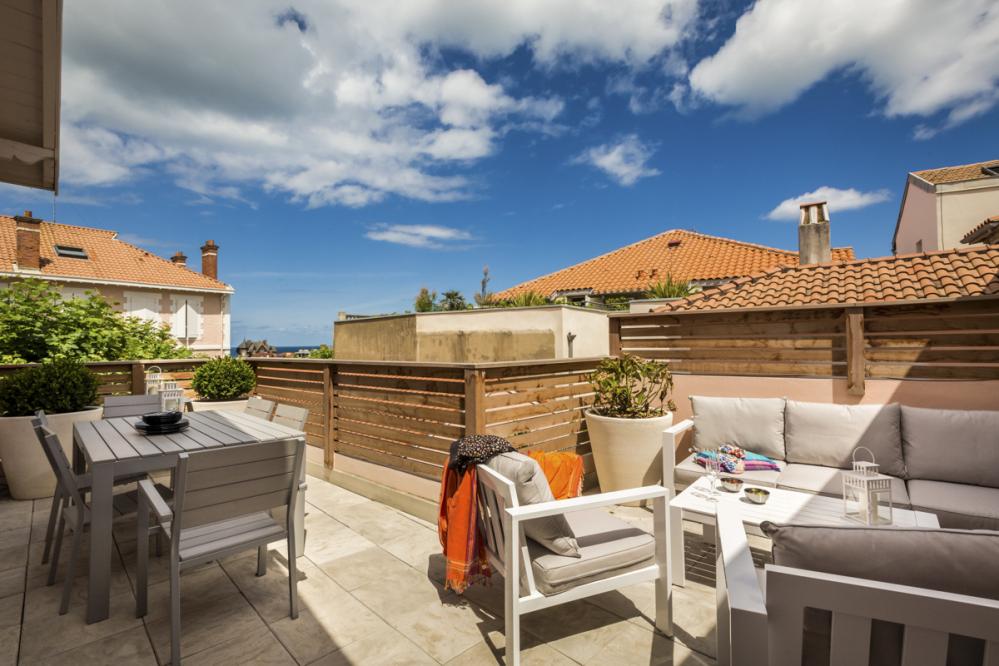 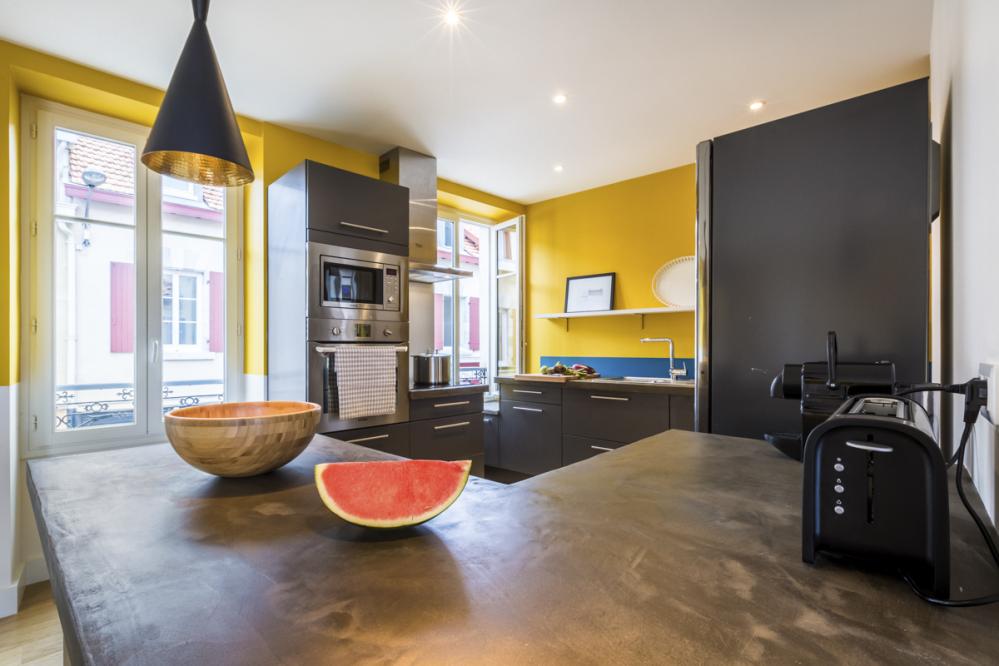 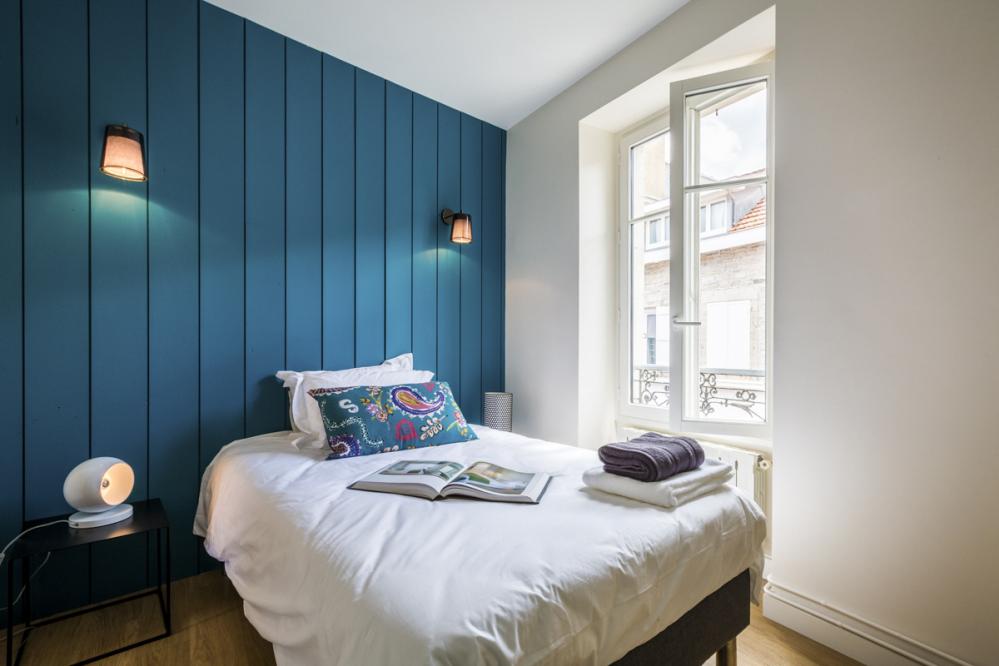 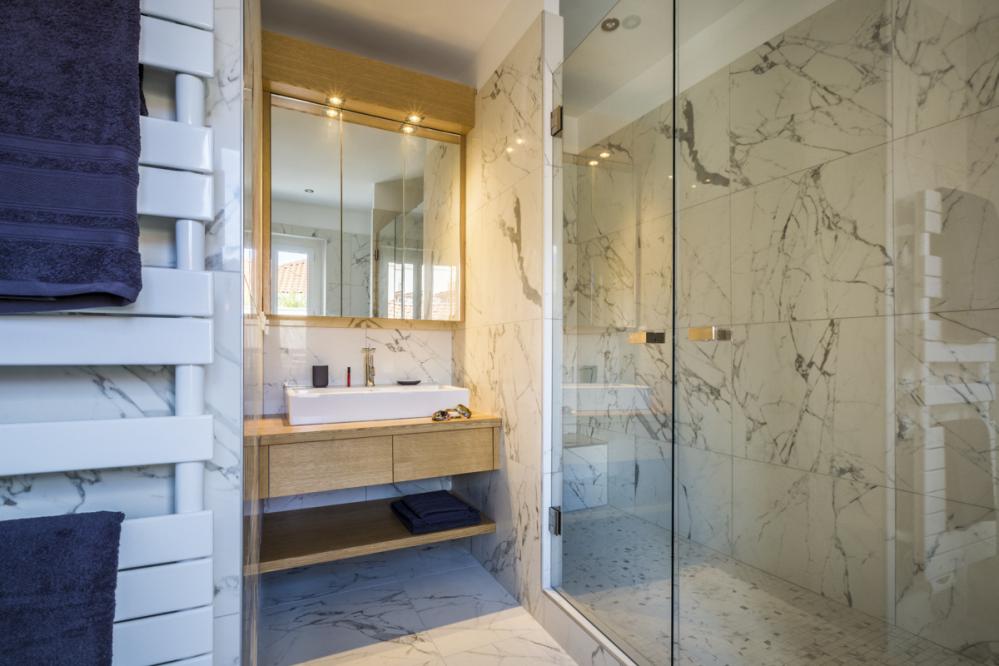 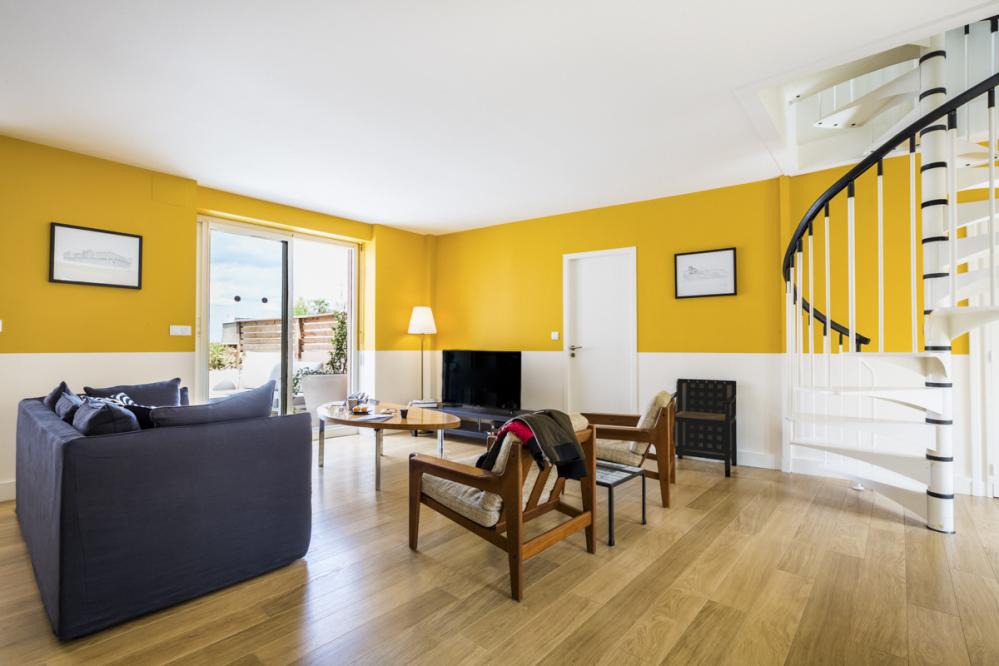 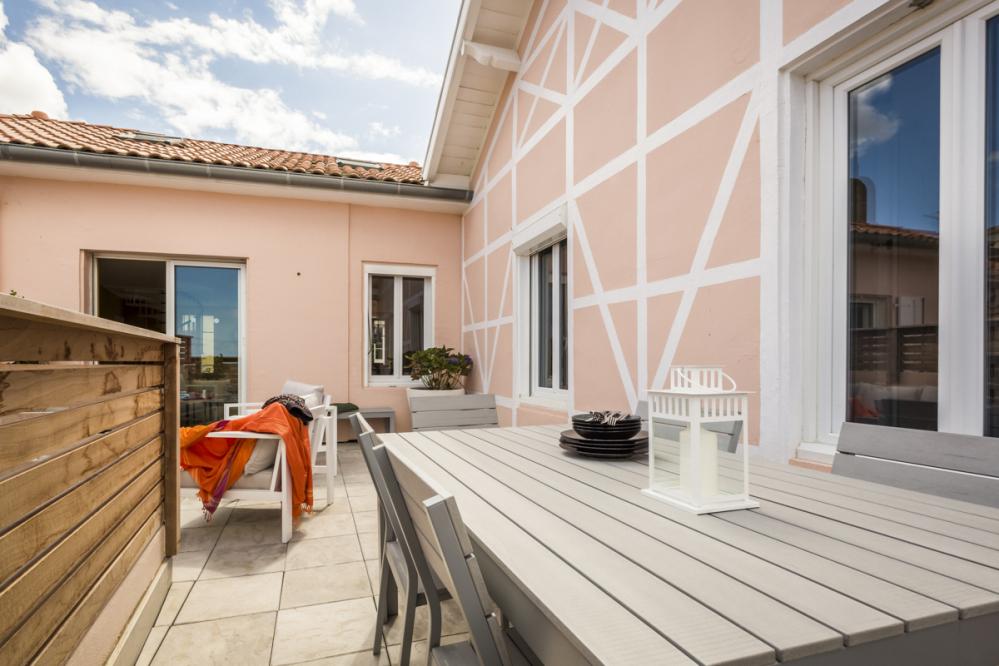 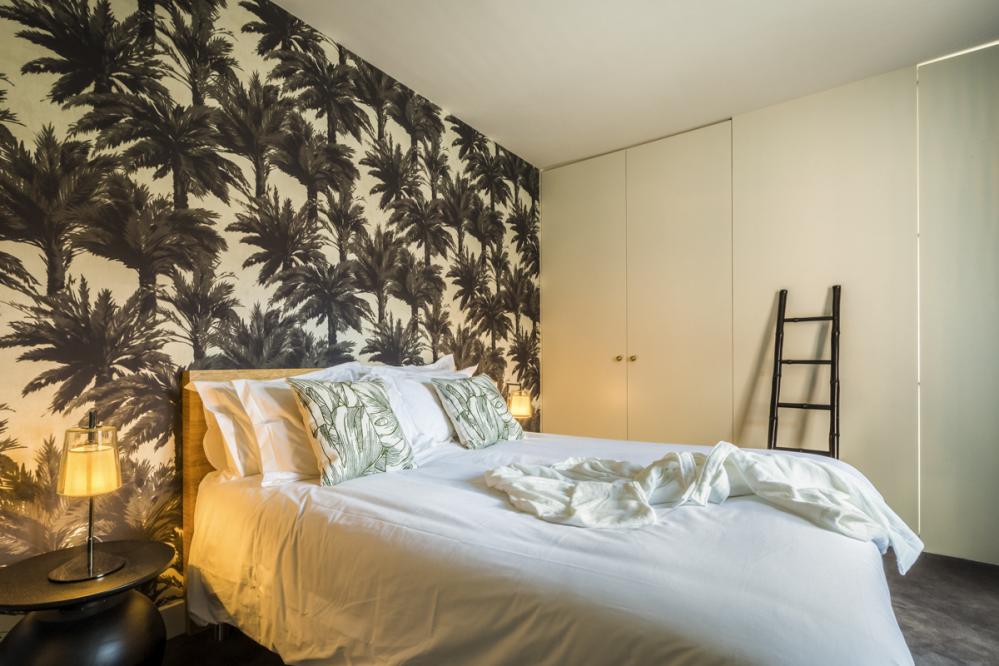 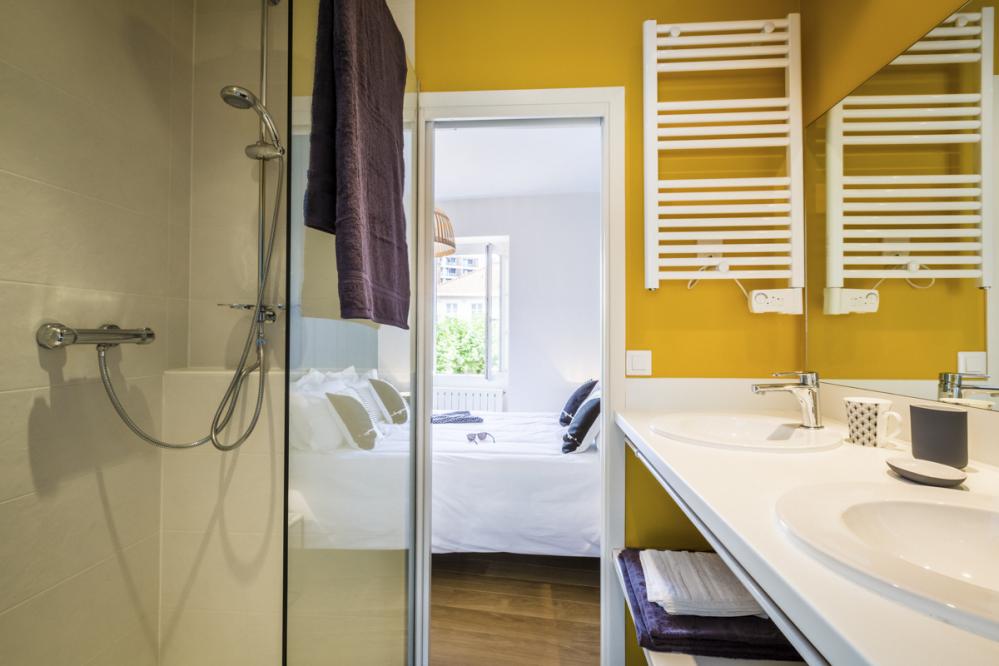 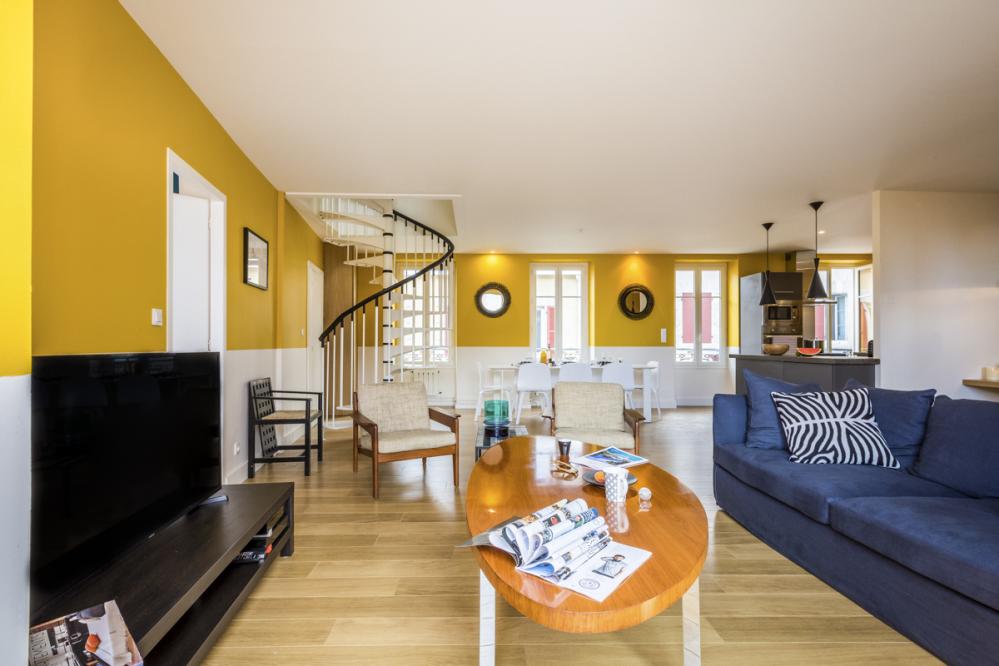 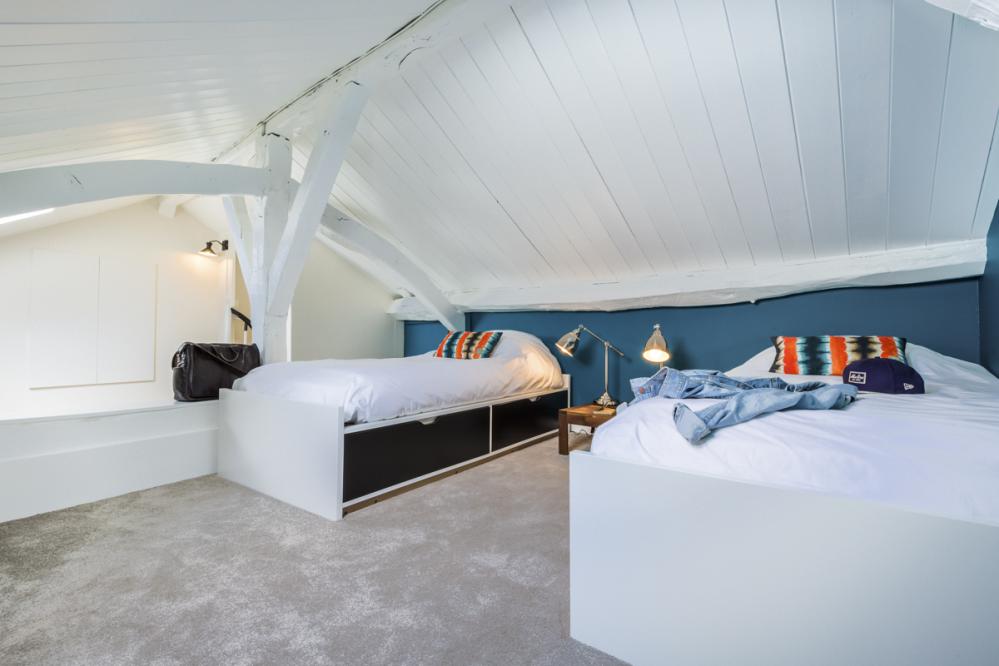 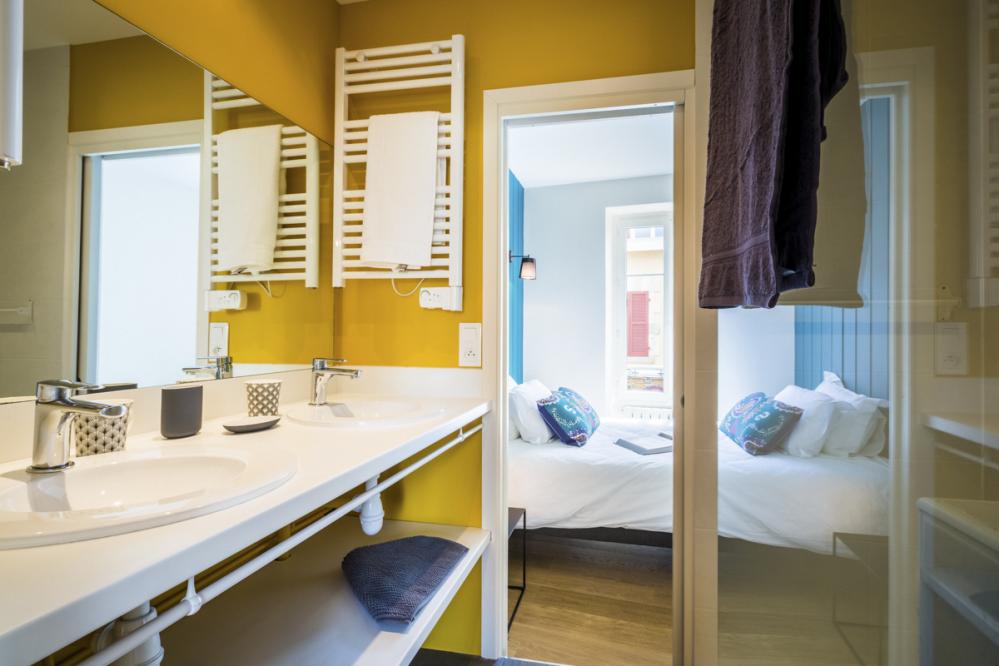 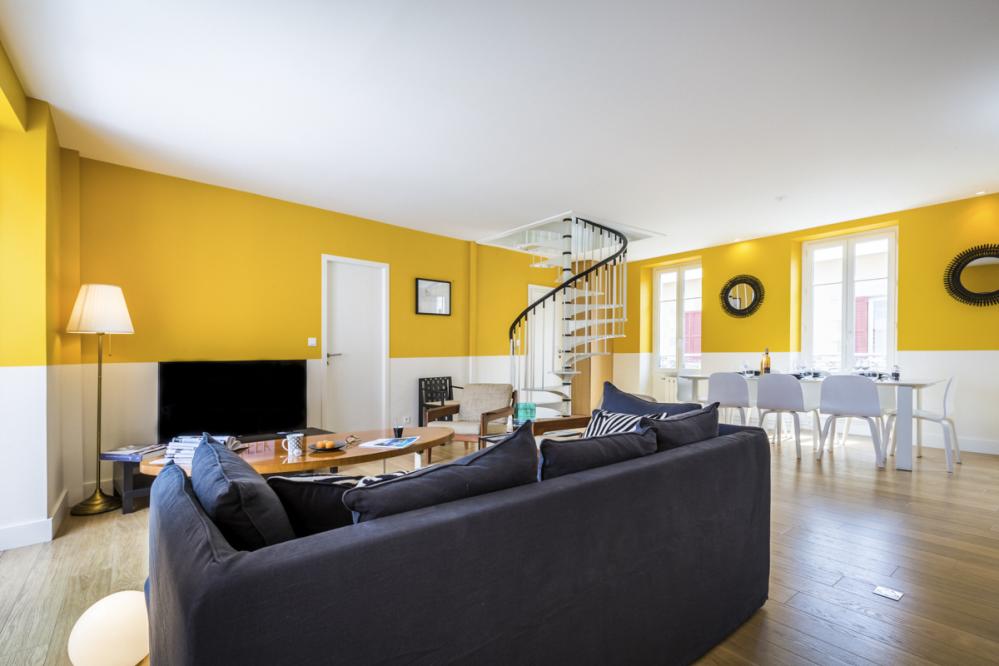 Soleil D’Ete is a beautifully furnished and very comfortable duplex apartment which exudes fun and functionality. It’s perfectly situated within easy walking distance of the trendy shops, markets and fine restaurants of downtown Biarritz and only 700m from La Grande Plage. Step outside the door of your self-contained retreat and you’ll quickly experience that famous Biarritz buzz.

Fun lovers will enjoy the sky-blue theme in the bedrooms with its tasteful yellow splashes in the living space to remind you of summer sunshine. With its own entrance, Soleil D’Ete is spread over three floors, feeling more like a town house than an apartment. It’s so convenient to be able to leave your bikes and surf boards in the hallway on the ground floor and dry out your gear in the laundry room after a trip to the beach.

A gorgeous, spacious open-plan living-dining and kitchen area is on the first floor – windows and doors fill the whole space with light. The private terrace offers views over the rooftops towards the ocean. On the same level, the master bedroom with marble shower-room and soft carpet is just luxurious. You can glimpse the ocean from the second double bedroom which conveniently interconnects to a shower-room and single bedroom.

An attic room with TV is perfect for teenagers and young at heart grown-ups who will enjoy climbing the circular, narrow staircase to reach their comfy den in the roof.

When you have relaxed and are ready to try out your modern well-equipped kitchen, head towards the amazing market at the Halles de Biarritz, only 50m away, with its many wonderful Basque specialities.

Biarritz is of course a mecca for surfers and Oliver’s Travels guests can arrange surf coaching for all abilities or just equipment hire so you can head to nearby La Plage de la Cote des Basques and ride the waves alongside surfers from across the world.

Other services that can be offered include guided tours, bike rental and scooter hire or you may wish to hire a car or even personal chauffeur so you can get out and explore some of the further wonders of the Pyrénées-Atlantiques region, whether idyllic Basque villages near the majestic mountains, wilder beaches along the coast or pretty seaside villages.

You may prefer to just stay in Biarritz, close to your perfect terrace apartment, where you can explore, shop, dine, surf, play golf or just relax by one of the many wonderful beaches this part of the Basque coastline has to offer.

- Laundry room
- Hallway for storage of bikes and surfboards

First Floor (via staircase without a bannister)

- Private Terrace (25m2) with city views towards the sea, accessible from living room with comfortable seating, table and chairs

Soleil d’Ete is located in the heart of Biarritz on a bustling street filled with pretty shops, re...

Soleil d’Ete is located in the heart of Biarritz on a bustling street filled with pretty shops, restaurants and supermarkets. There’s even a 24-hour vending machine in the street below if you fancy a snack late at night alongside the occasional hungry party goer who may pass by.

Biarritz, an elegant resort in the Pyrénées-Atlantiques region in south-west France, dates back to the mid-19th century when aristocracy built their summer residences along this part of the coast, including the well-known Hotel du Palais, built by the wife of Napoleon III and just a ten-minute walk away along the beach.

The most famous beach, La Grande Plage, is in the heart of Biarritz and just 700m from the apartment. There are other beaches around the town such as La Plage de la Cote des Basques (also 700m), which has become a favourite for surfers. Indeed, Biarritz has become a surfing mecca with enthusiasts from all over the world attracted to the 6km of Biarritz coastline and beyond. There are plenty of surfing schools for abilities and all ages. Oliver Travel’s guests can arrange surf coaching or just equipment hire during their stay.

You will find some wonderful restaurants in the Port des Pecheurs (500m), the former fishing port, where fresh seafood can be found. Food lovers, don’t miss the amazing market at the Halles de Biarritz, within a couple of minutes, including many wonderful Basque specialities. Some of the local specialities include the local touron (marzipan), locally cured ham as well as mussels, mushrooms and more.

It’s also a lovely atmosphere around the Port Vieux, just a five-minute walk away, where there is a tiny sheltered beach loved by locals and the town’s main shopping street, Rue Port Vieux. Amazing Art Deco buildings around the town and especially along the La Grande Plage include the casino and the Aquarium which is a must for sea-lovers or families.

Another one of the town’s highlights is the incredible Rocher of the Vierge peninsular (650m), which can be visited via the Eiffel bridge that connects it to the mainland or the fascinating lighthouse (2.5km) in the northern part of the town where there are some incredible views.

For a change of scene, head to the beaches to the north of the lighthouse along the Anglet coastline with wide, sandy stretches, some surrounded by grassland and forests and with a beautiful promenade for walkers and cyclists.

There are also some idyllic Basque villages inland to explore such as two of France’s Plus Beaux Villages; pretty Ainhoa (28km) and Sare (26km), where you can take the old wooden train up to the summit of La Rhune, one of the most dominant peaks of the Pyrénées, where there are some restaurants with incredible views as well as hiking opportunities.

Indeed, this whole region offers an extended range of outdoor activities, such as walking, horse- riding, fishing, cycling, canoeing and many others including water-sports along the coast

The 6km of coastline around Biarritz includes some wonderful beaches for families, not just La Grand...

The 6km of coastline around Biarritz includes some wonderful beaches for families, not just La Grande Plage, 700 metres from your apartment. There are other beaches such Plage Milady (with playground) to the south as well as Cotes des Basques, which has become a favourite for surfers. Indeed, Biarritz has become a surfing mecca with enthusiasts from all over the world attracted to its 6km of coastline and beyond. There are plenty of surfing schools for beginners of all ages including children.

There are some great activities that can be arranged for Oliver’s Travel’s younger guests such as kids golfing lessons, bike rental for all ages and surfing lessons for the family. Skateboard hire and Segway tours can also be arranged for families with older children.

You can take the little Biarritz road-train along the coast for a more leisurely way to see the coast with a trip lasting 30 minutes. Stop off at the Aquarium of Biarritz (700m) houses a variety of marine creatures with a café serving pizzas and wraps for lunch.

If you want to explore further afield, head south to St Jean de Luz (16km) where you’ll find plenty of family-friendly activities such as trampoline parks, mini golf and another road-train to beautiful sandy beaches featuring playgrounds and games.

Real train lovers should head inland to Sare to catch the old wooden train up to the summit of La Rhune mountain where you are greeted with spectacular views of the Pyrénées and coast on a clear day.

Oliver’s Travels guests will also have access to special rates to use the 5* Sofitel’s Pool and Spa in Biarritz, featuring a thalasso therapy centre as well as an indoor pool.

Ask a question about Soleil D'Ete