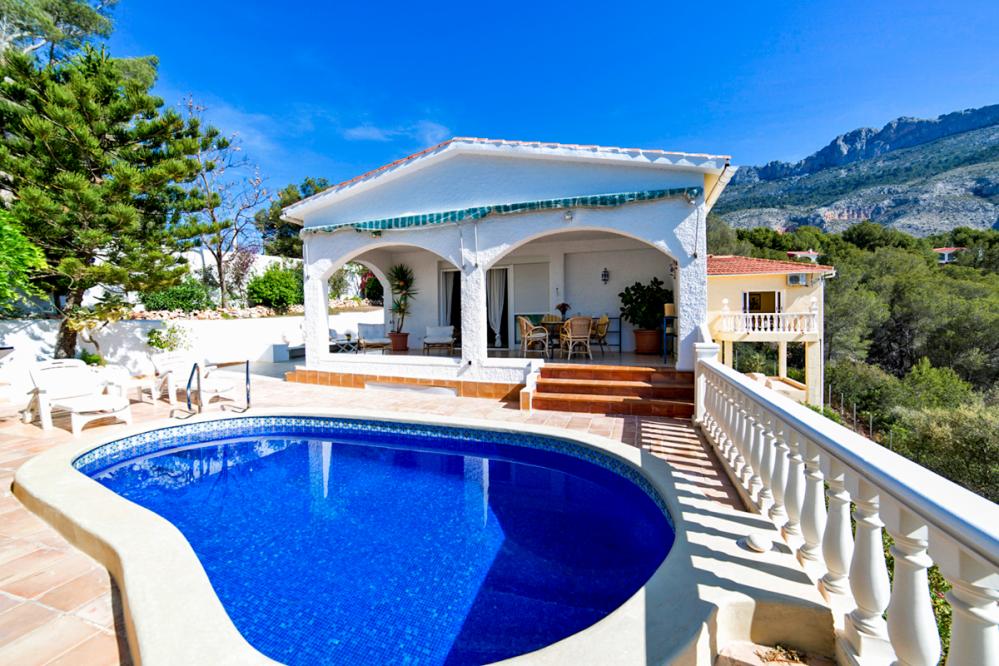 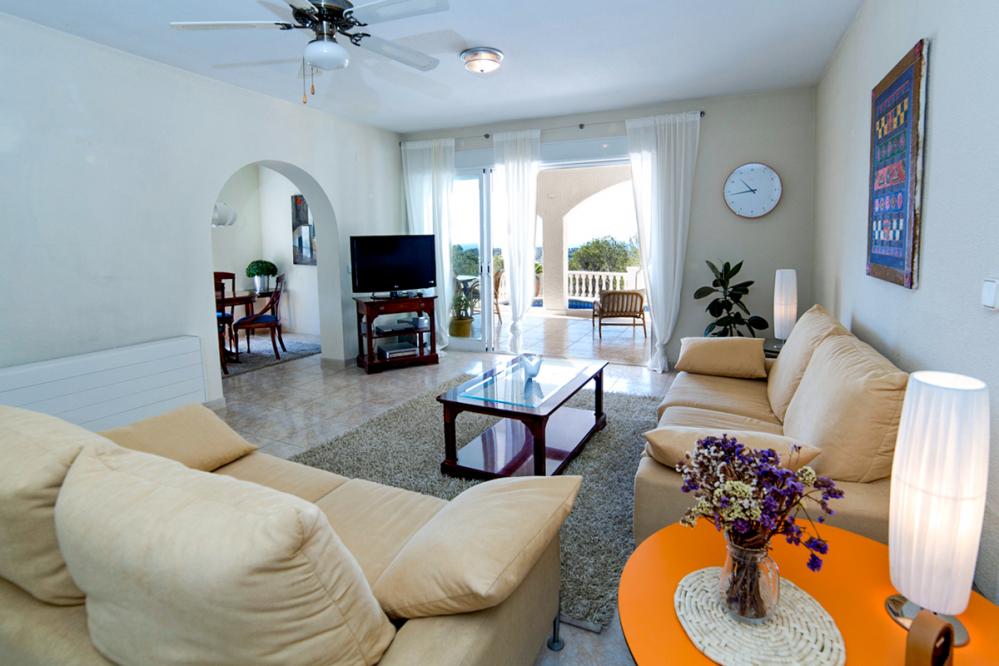 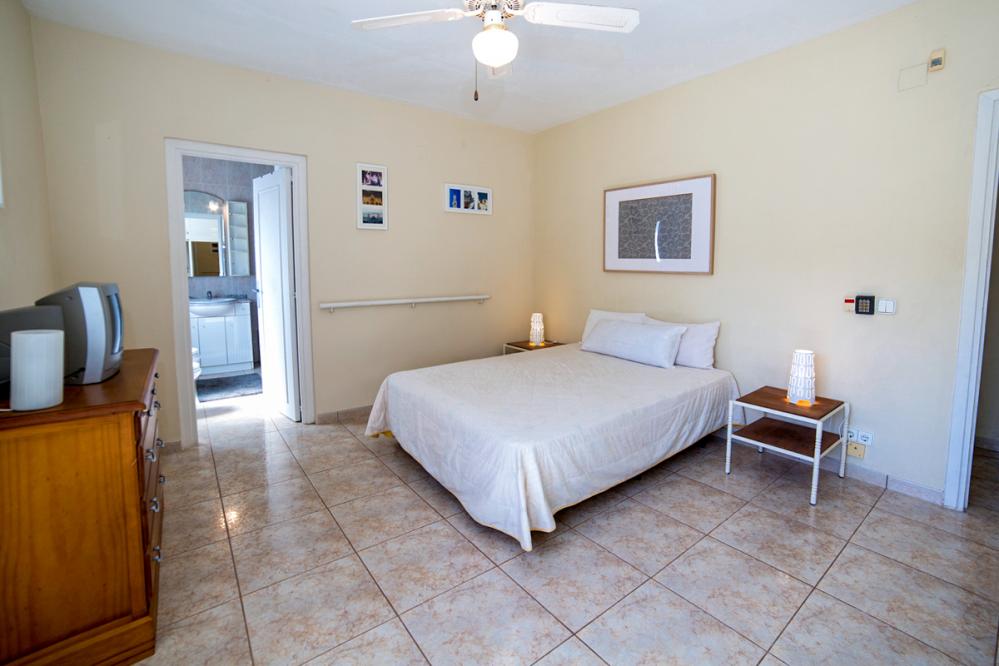 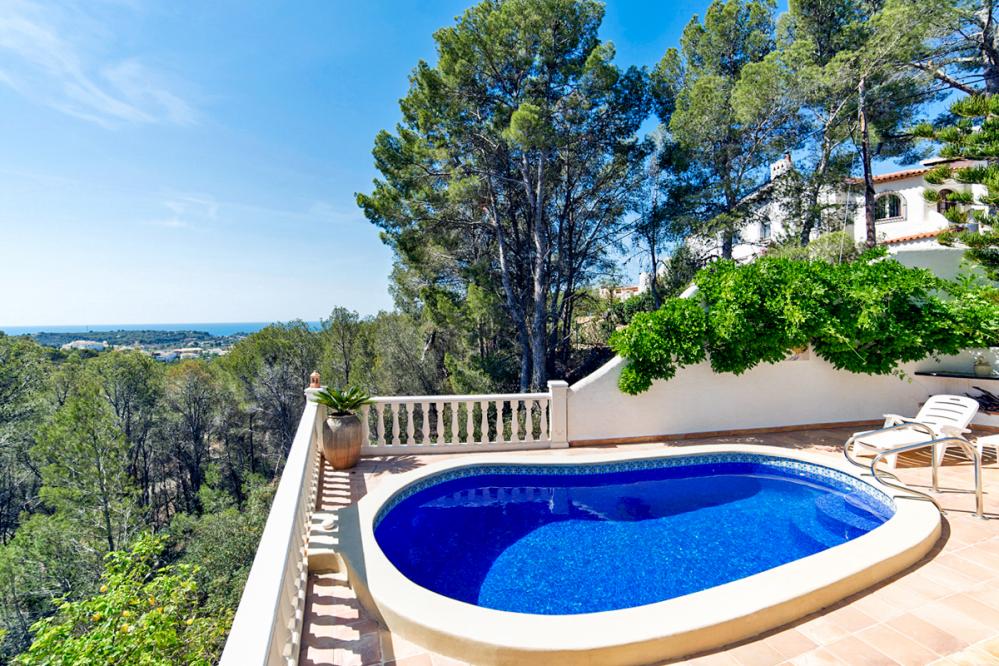 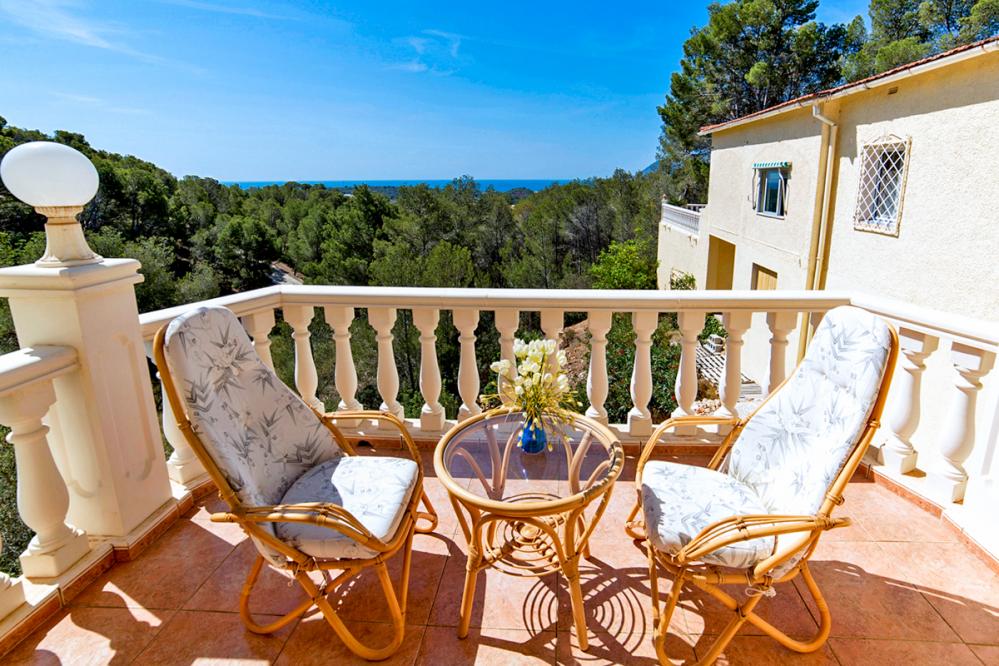 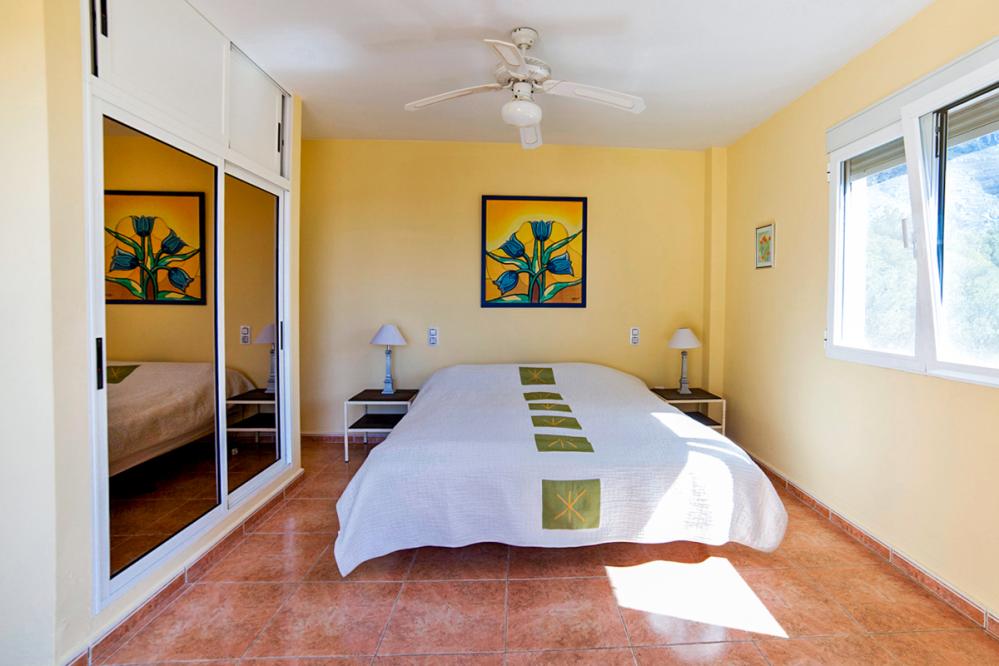 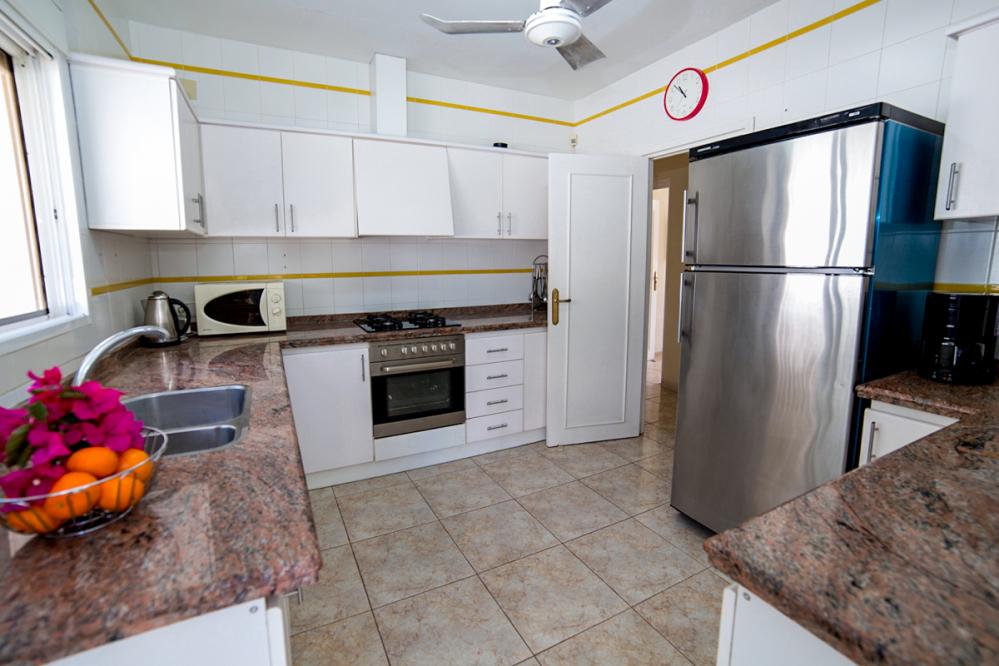 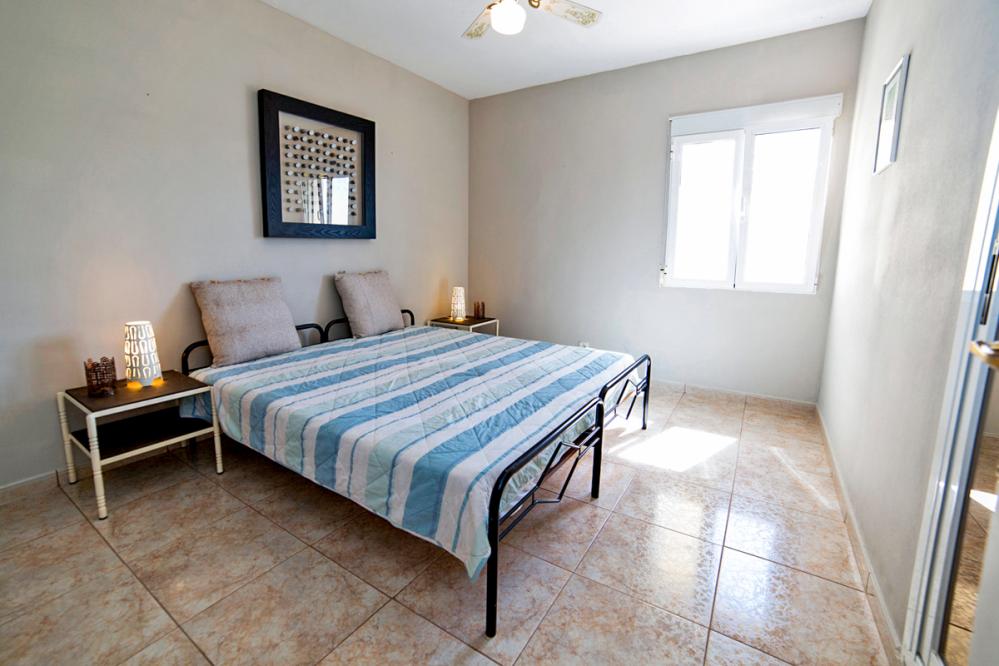 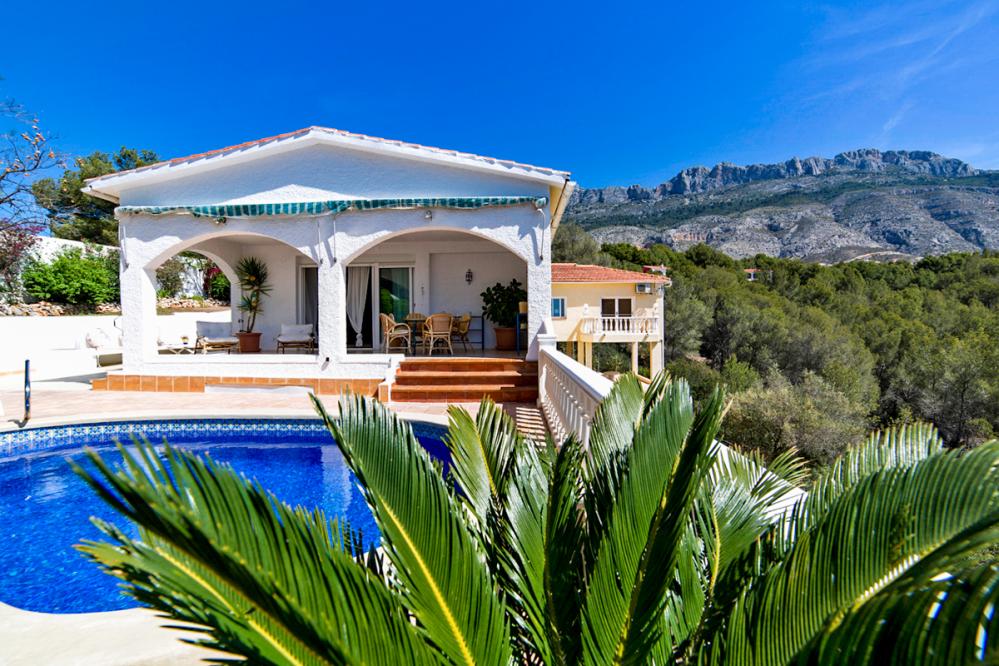 Villa Hijas is a charming, 3-bedroom villa in a tranquil location, surrounded by trees, an ideal retreat away in the sunshine. Walking distance from shops and r...

Villa Hijas is a charming, 3-bedroom villa in a tranquil location, surrounded by trees, an ideal retreat away in the sunshine. Walking distance from shops and restaurants, the property allows you to completely relax from the moment you arrive.

The villa offers cosy, family living throughout, with a relaxed, calm atmosphere in every room. With all the living spaces on one floor, Villa Hijas is great for families that enjoy sociable living. The living/dining room is bright and airy, with large glass door giving access to the terrace, ideal for moving between the inside and outside spaces. The kitchen is fully equipped, so why not try your hand at some Spanish classics, maybe taking inspiration from the nearby restaurants!

There are two en-suite double bedrooms and a further twin bedroom, as well as a further bathroom. One of the double bedrooms has access to a charming balcony, the perfect spot for taking some time to yourself, reading your favourite book, or enjoying a morning coffee making the most of the beautiful surroundings, a romantic moment in this villa.

Outside, Villa Hijas offers a charming terrace with a kidney shaped private pool, perfect for cooling off in the warm Spanish climate. A covered terrace offers space to dine al-fresco, maybe even cooking on the barbecue. Gazing over the treetops towards the sea really does install a feeling of calm and beauty, it is hard to draw your eye away. Although the villa is cosy, there is still ample space to socialise as a group and find moment to yourself. Villa Hijas offers something for everyone, a retreat away in the treetops.

Villa Hijas is a charming, 3-bedroom villa in a tranquil location, surrounded by trees, an ideal retreat away in the sunshine. Walking distance from shops and restaurants, the property allows you to completely relax from the moment you arrive.

Altea is, without doubt, one of the most charming towns to be found on Spain’s ‘White Coast’, ...

Altea is, without doubt, one of the most charming towns to be found on Spain’s ‘White Coast’, located in the region of Alicante on the Costa Blanca. The town is just 11 kilometres north of Benidorm, yet the two resorts are worlds apart. Altea is similar to other Costa Blanca towns in that it has a new and an old neighbourhood. The old section is perched on top of a hill from where you will find really spectacular views.

All in all, Altea is a pretty town, popular with both holidaymakers and those fortunate enough to be able to live in the area; it has a slowly growing community of multinational expatriates.

The beautiful blue-and-white tiled church dome peeking out among the glistening white houses in Altea’s old town has become an icon of the Costa Blanca.

Sitting between the busy resort of Benidorm to the south and Calpe with its majestic Ifach rock to the north, Altea is a beautiful little resort to explore the 200 kilometres of the Costa Blanca coastline and its mountains.

Although Altea is just 10 kilometres from Benidorm, it is a world apart in terms of its beauty, culture and visitors. It’s much quieter for a start and appeals to people seeking a tranquil holiday amid beautiful scenery. There are two main areas – along the beach and up in the old town.

Although it’s certainly no longer a tiny little fishing village, Altea is still more traditional and smaller than some of the other resorts you’ll find on the Costa Blanca. Visitors gravitate towards it mainly because of the lovely old town, quieter beaches and the port area.

It has 6 km of coast, which is not as sandy as a number of the other locations on the Costa Blanca. Basically, you need to be aware before you go there that the beaches are pebbly. The two main beaches which are most accessible from the town are Playa de Cap Blanch and Playa de la Roda. The latter can be found below the old quarter and the former in the south of the town.

Wandering along its coast, you’ll discover mainly small beaches, which tend to be a combination of pebbles and sand. High cliffs split the coastline into coves, and near the harbour is the beach of Pueblo Macarat. Also about 4km from Altea is Playa del Albir.

Costa Blanca is famous for the ‘Brits Abroad’ culture, and it’s understandable why it attracts such crowds throughout the summer months. Guaranteed weather, world-class beaches, tons of family facilities and bumpin’ nightlife is a recipe in popularity. Why not experience a different side of Costa Blanca with a villa holiday?

Here’s some handy tips for the best eats, things to do with groups, family activities and the must-sees for Costa Blanca. You might need two weeks’ holiday after all….

The villa is a lovely place for kids to hang out - teenagers and older children will love having the...

The villa is a lovely place for kids to hang out - teenagers and older children will love having their own space, while children of all ages will love swimming in the pool. The outdoors area all good to run around and play, will ensure many fun evenings!

The house is a beautiful family retreat in a quiet location but close to so many fun things to do together as a family, from exploring beaches to having dinner in the old town of Altea.

A 20 minutes drive heading towards Benidorm will take you to the Terra Mítica theme park. All the Mediterranean countries are represented here and it's a great day out for the family, with lots of attractions on offer.

Also in the direction of Benidorm, around 10 km away, you’ll see a signpost that says Callosa. Follow this been going around 3 km out of the town you’ll find Fuentes de Algar. This is a beautiful spot which combines greenery, waterfalls and mountains together. On a sunny day, you can take a dip in the shallow waters, and there is plenty of typical restaurants around to choose from as well.

Ask a question about Villa Hijas