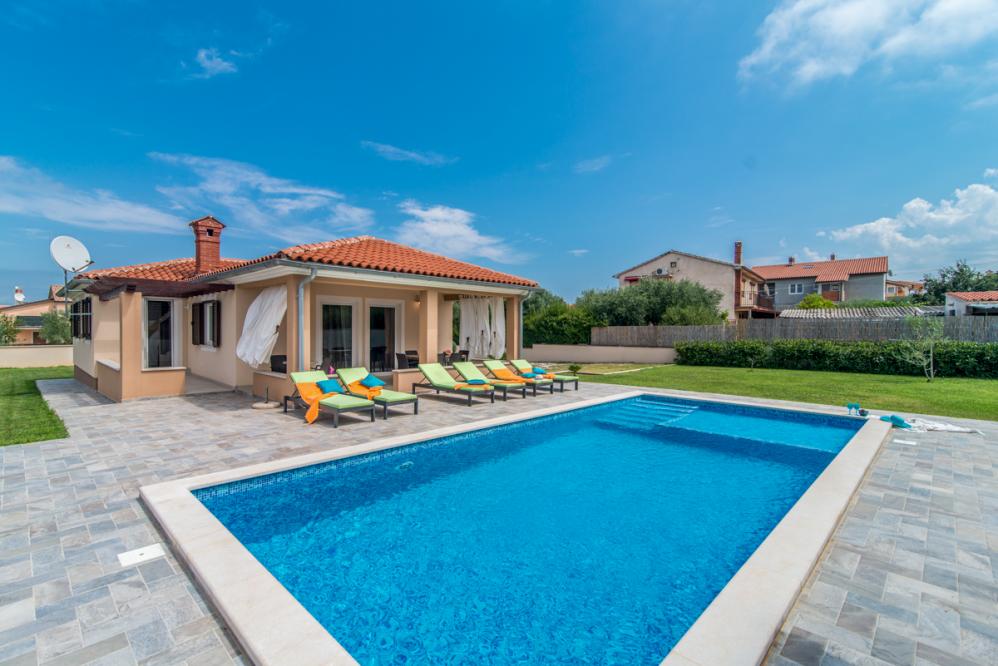 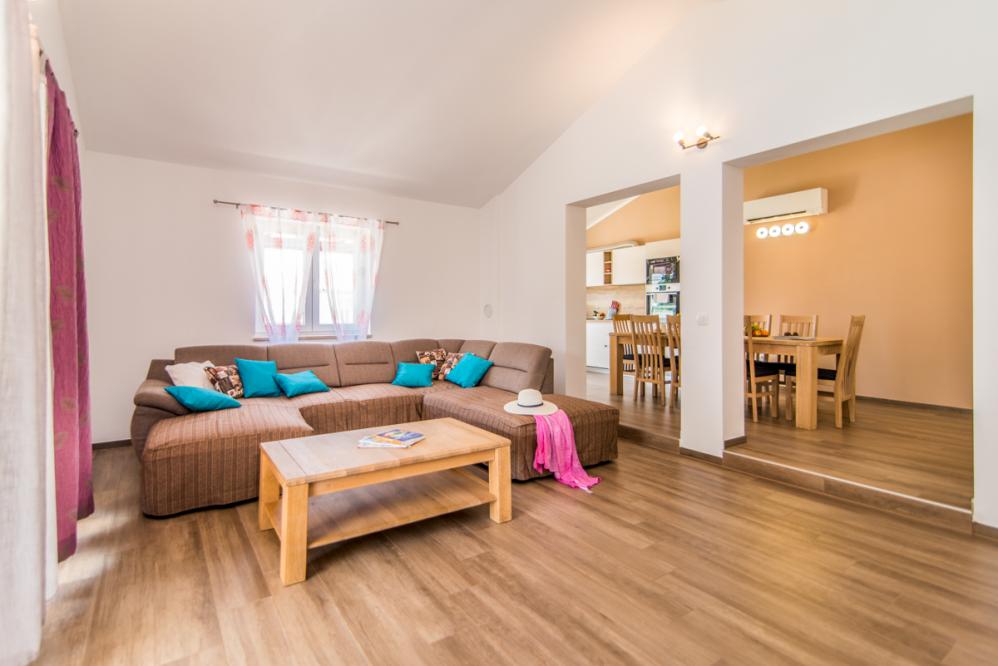 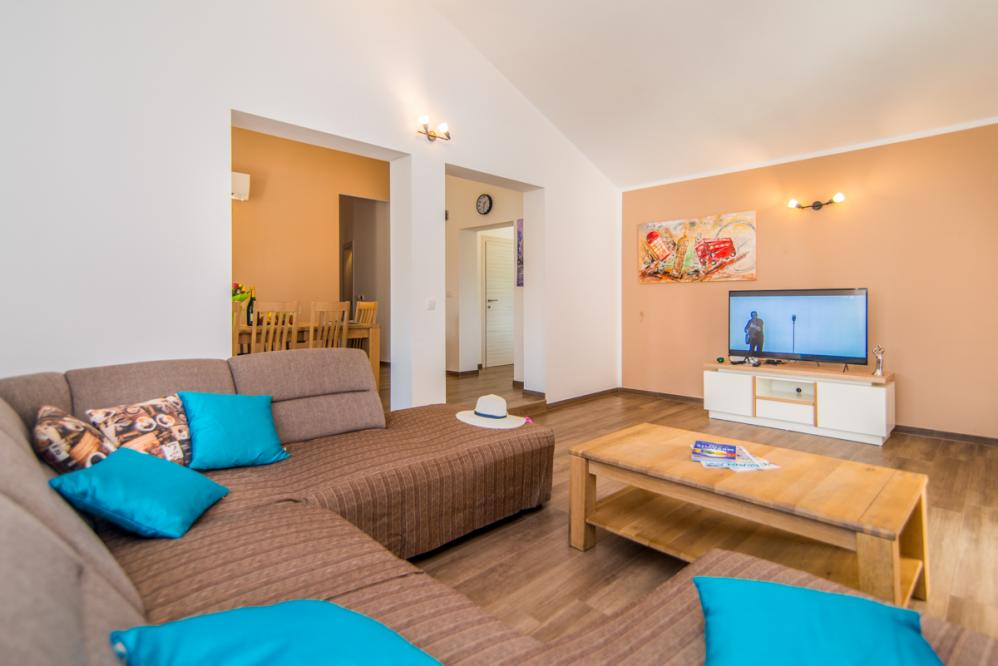 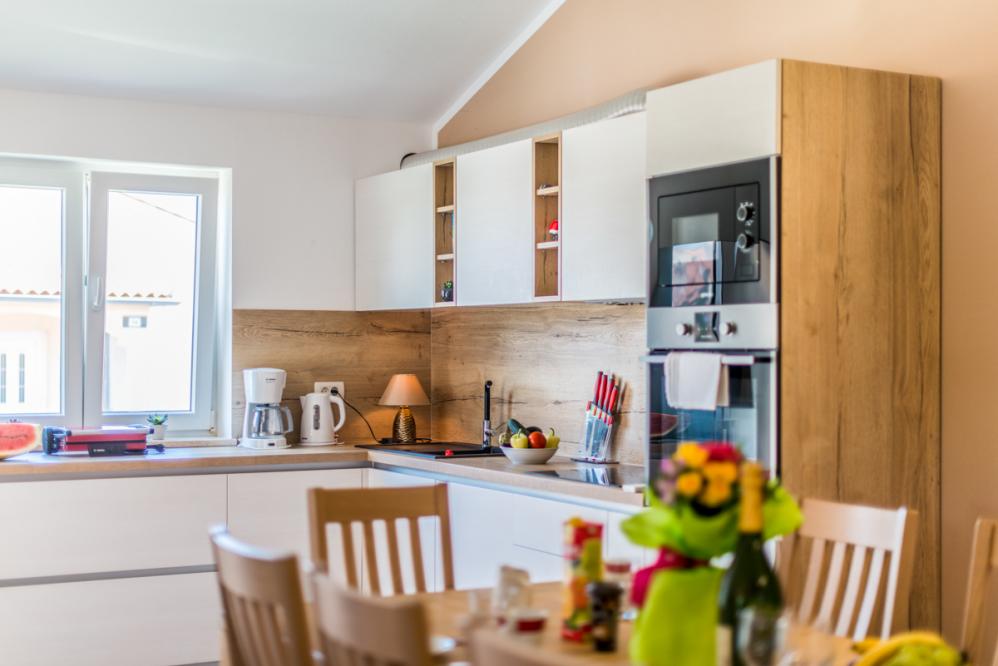 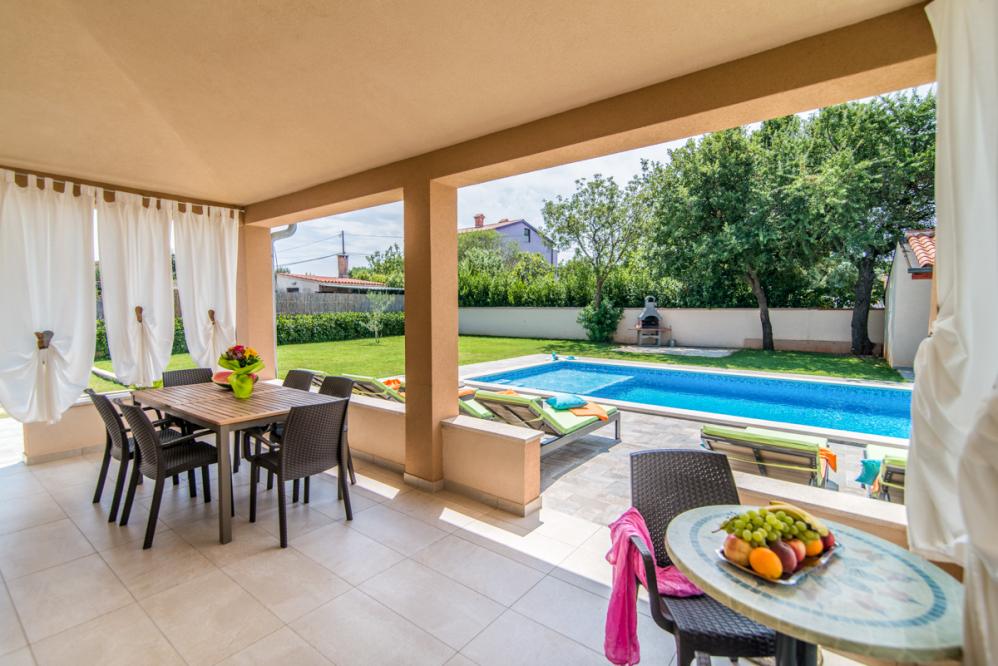 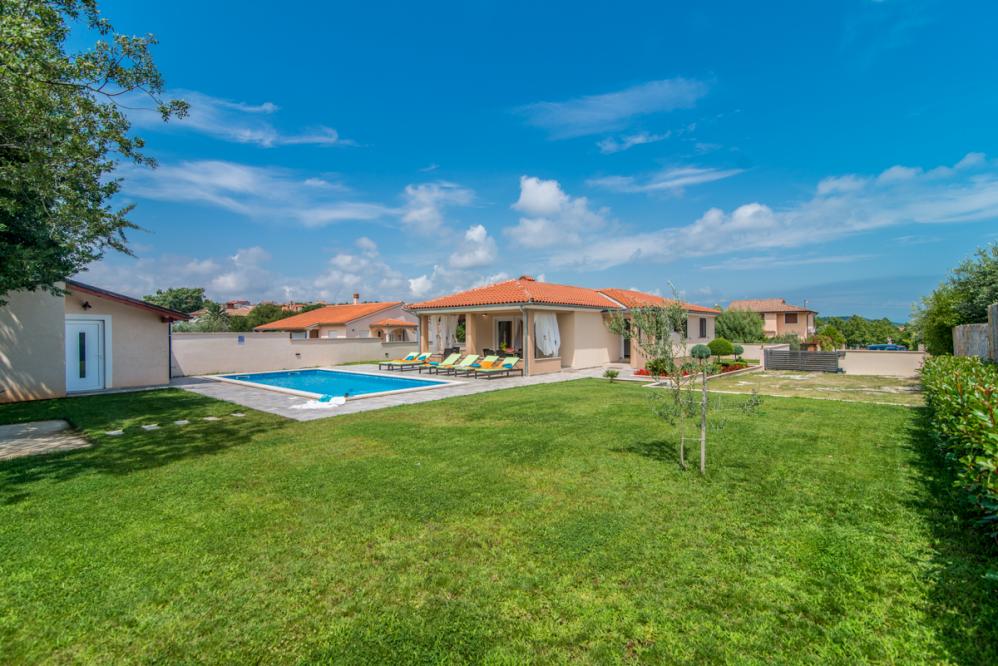 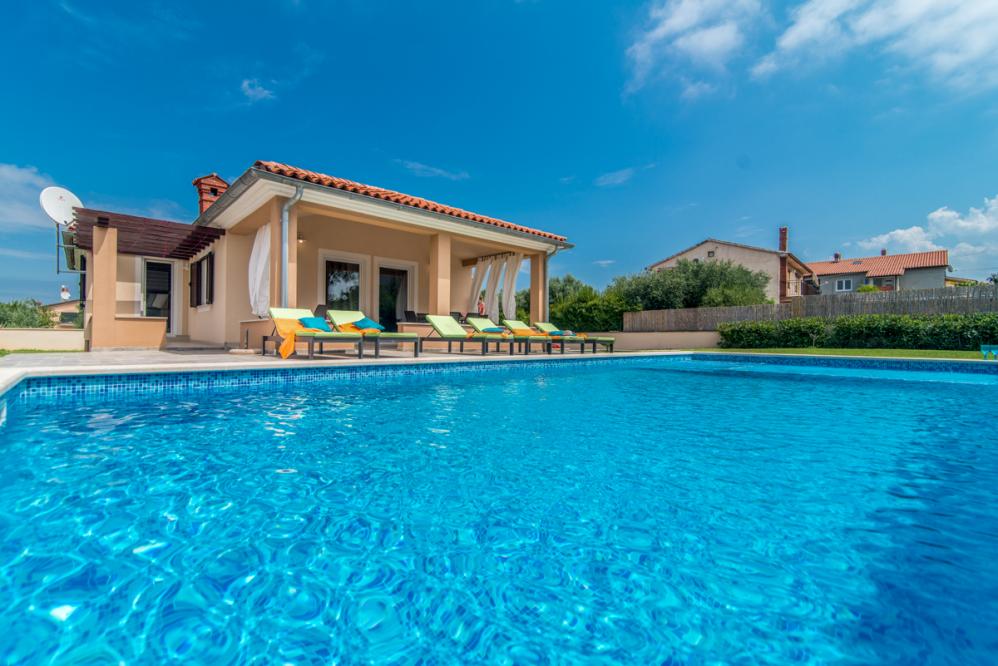 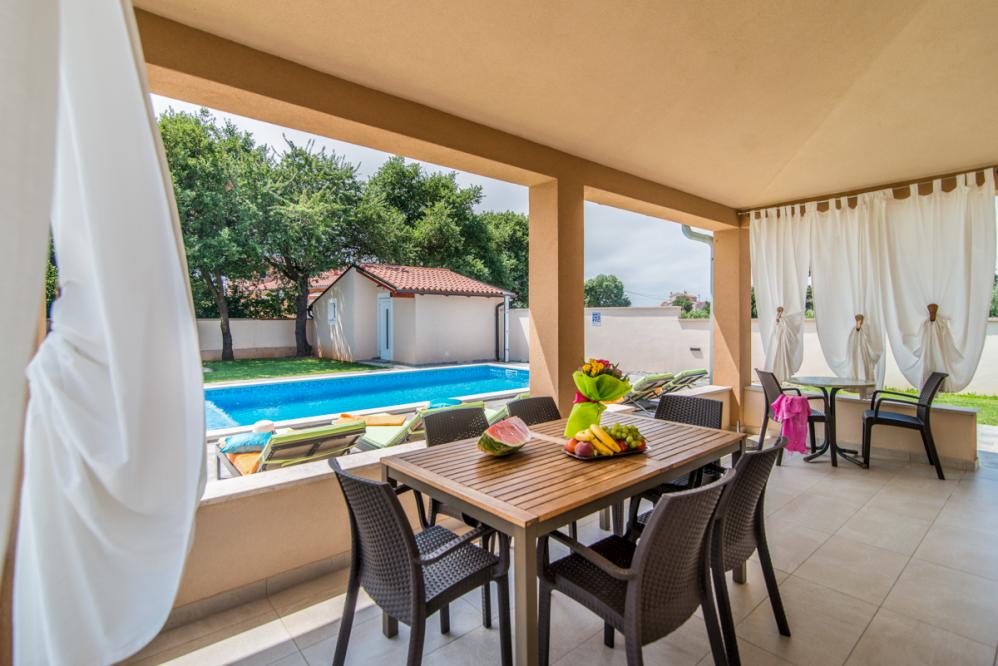 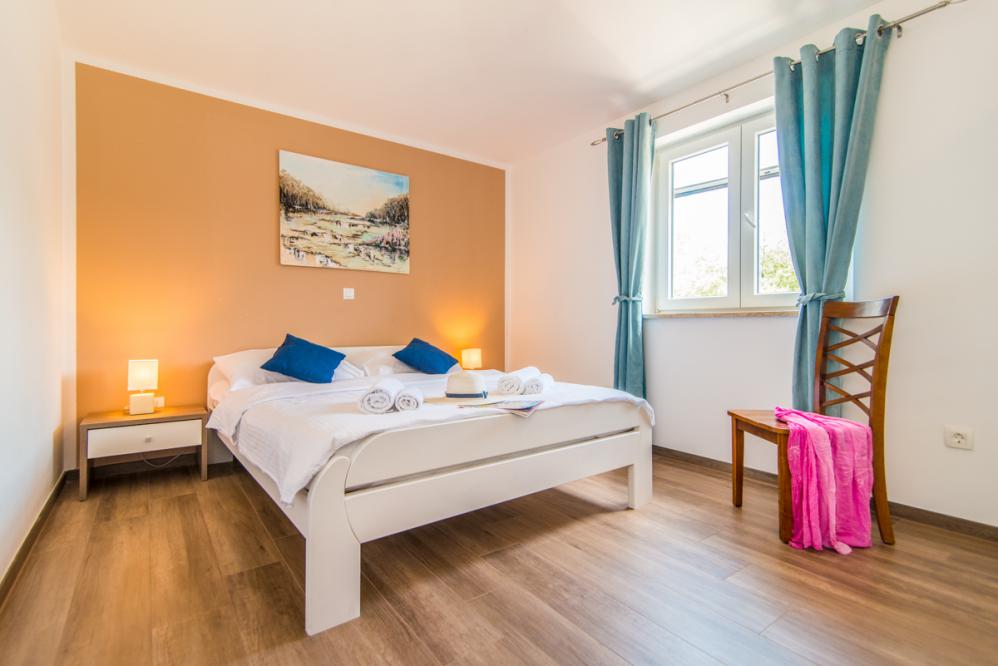 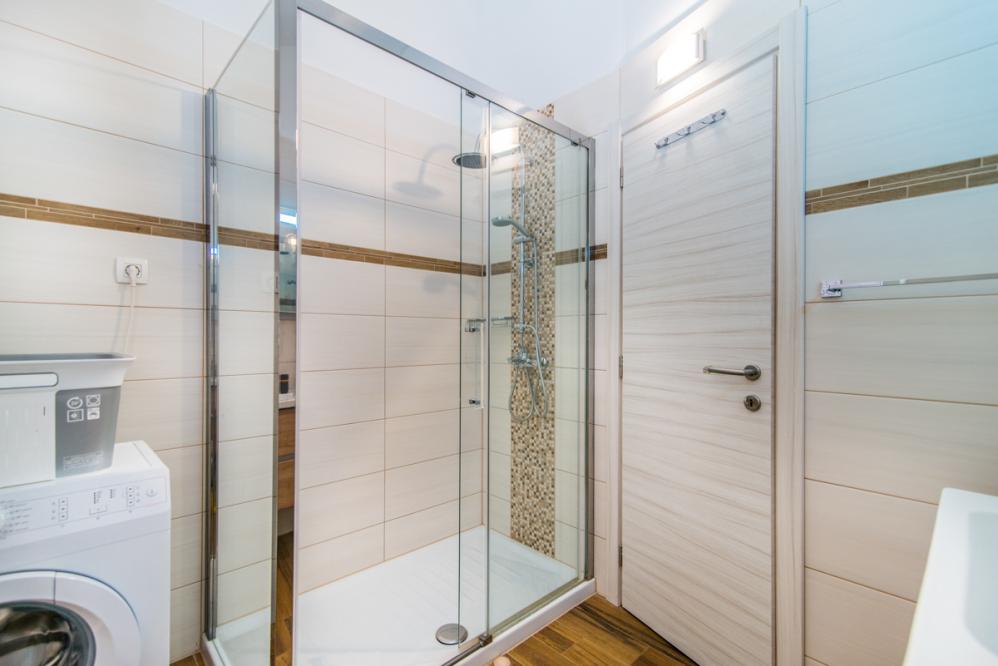 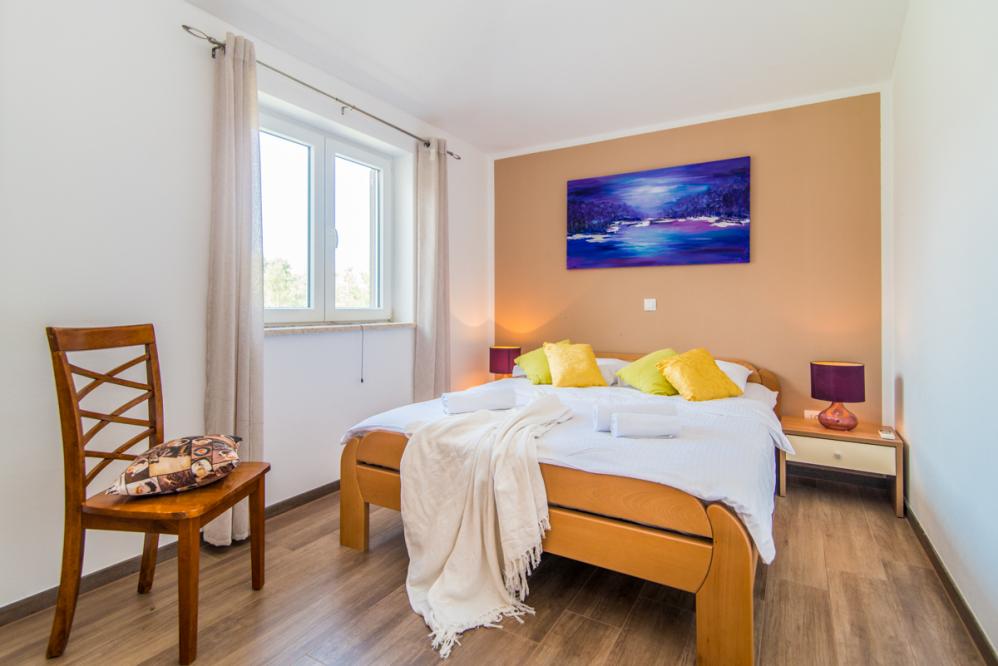 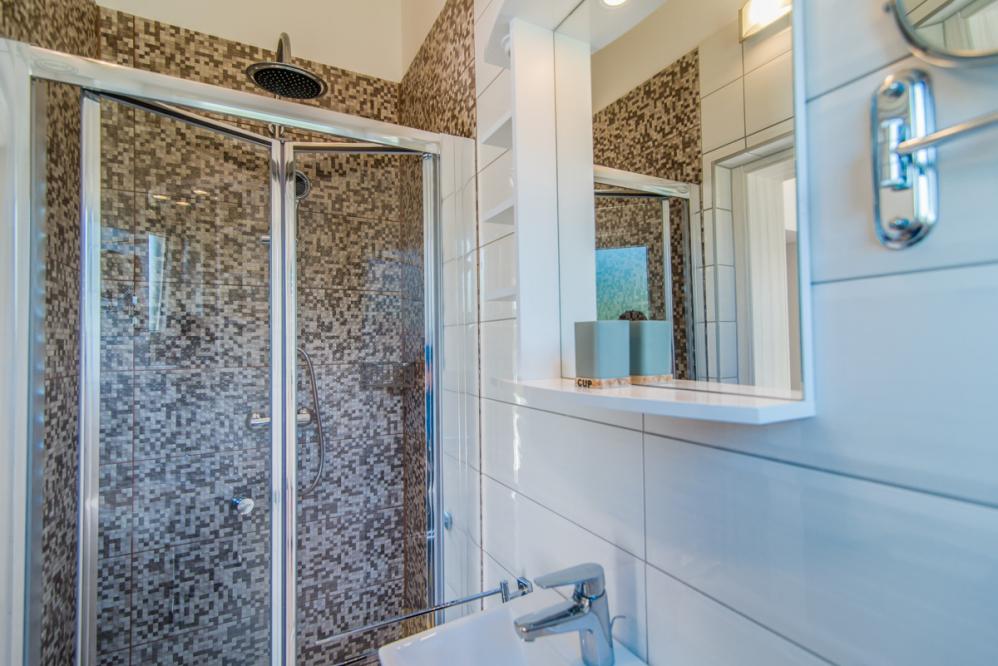 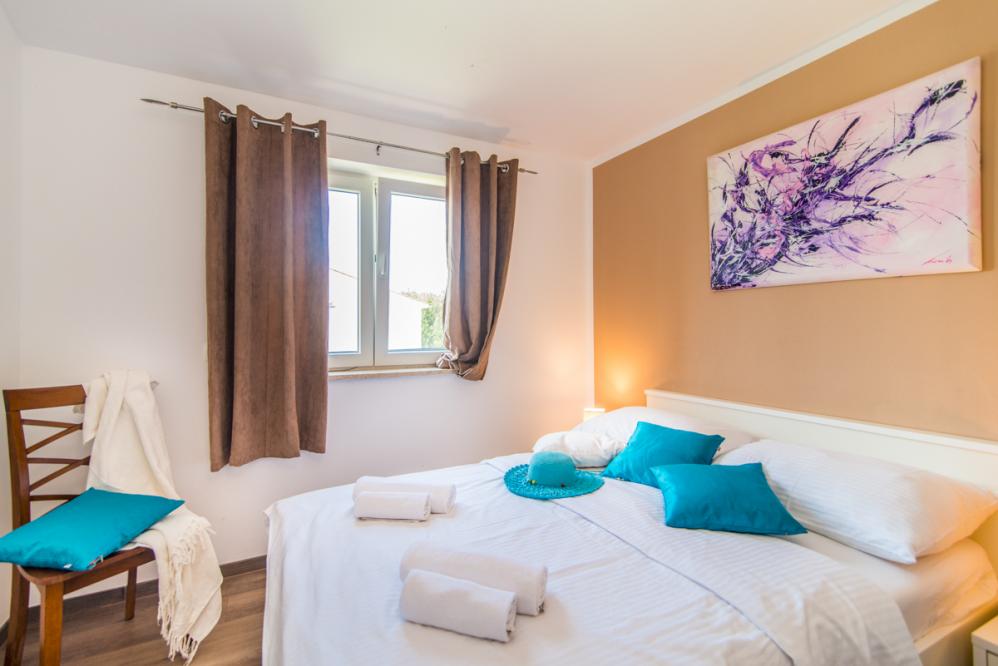 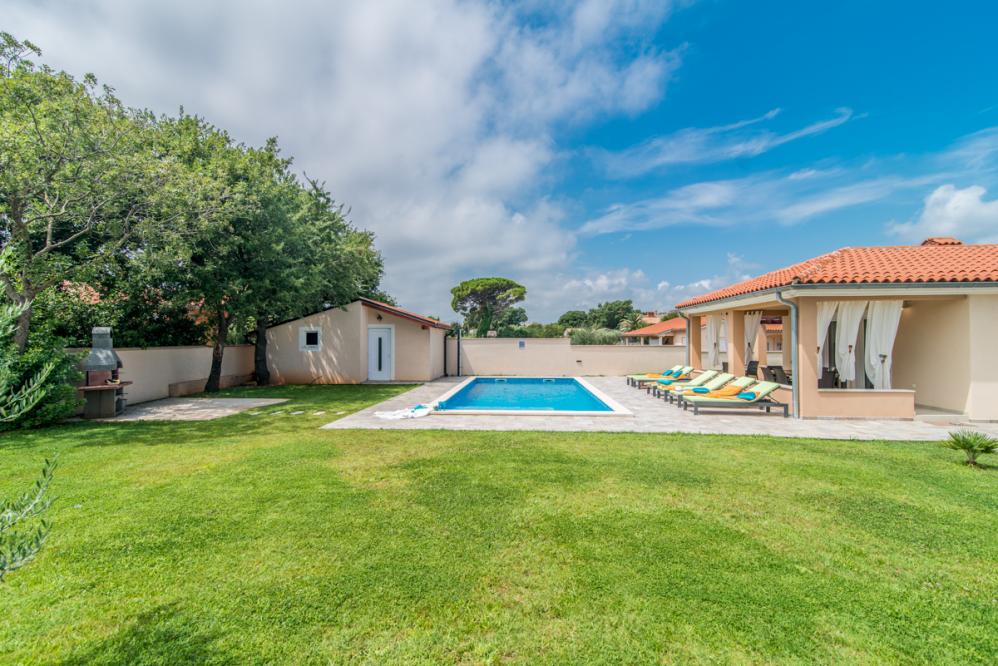 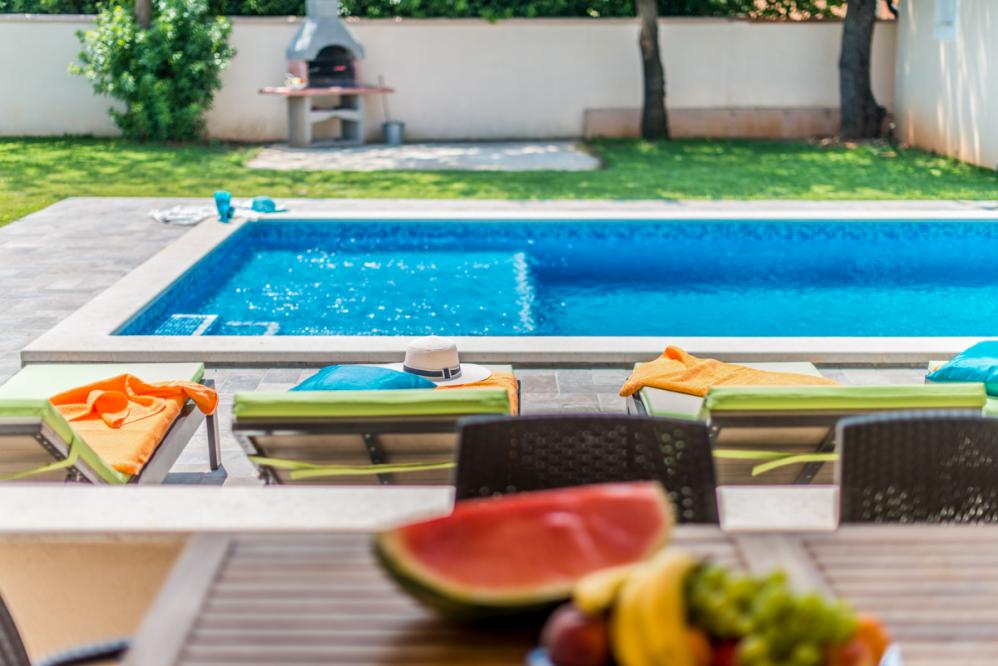 Combining great features with plenty of open space, Villa Lilah accommodates up to six guests. Located in the coastal village of Ližnjan, around 12km from the ...

Combining great features with plenty of open space, Villa Lilah accommodates up to six guests. Located in the coastal village of Ližnjan, around 12km from the city of Pula with its impressive Roman architecture, this villa comes with an outdoor pool and is just a 5-minute drive from the beach.

All on one floor, Villa Lilah is modern and comfortable. Outside you have green lawn areas and a paved terrace surrounding the step-accessible pool. There are six sun loungers lined up waiting for you, and a built-in barbecue too. The covered part of the terrace offers a delightful space for relaxing and dining, with the pool on one side and access to the house on the other.

Step inside and you’ll find an appealing, open-plan living space, complete with Smart TV and comfy sofa that’s perfect for lounging around. There’s another dining area here, and a lovely kitchen featuring a coffee machine, fridge, dishwasher and everything else you may need. The whole area enjoys lots of light, and it’s equipped with air conditioning and Wi-Fi.

You have three double bedrooms along with two shower rooms at Villa Lilah. If you need a cot for an infant, this is available too. With parking for two cars, this villa has all the essentials – hiring a vehicle is recommended to get around the region.

Just 12km from Pula Airport, this villa has one of Croatia’s most impressive historic cities on its doorstep. You will be able to experience the stunning Roman Amphitheatre which looks out over Pula harbour, along with many other sights of the period.

A little further up the Istrian coast is beautiful Rovinj, a definite must-see, and the attractive towns of Poreč and Novigrad, none of them more than one hour from Ližnjan. The eastern side of the peninsula is also well worth exploring, whether you visit glamorous Opatija or the magnificent Učka Nature Park.

Villa Lilah is a modern villa three bedroom located in south Istria in the seaside village of Liznjan, only a short drive from Pula city and the airport. The villa has a large garden and private swimming pool making it perfect for a family getaway or group of friends.

A pretty village on the Istrian peninsula’s south-eastern coast, Ližnjan is a relaxing place to t...

A pretty village on the Istrian peninsula’s south-eastern coast, Ližnjan is a relaxing place to take a break. Rocky beaches and views out to the Kvarner Islands set the scene, while the village itself offers a few good restaurants and occasional festivals and events. The location is convenient too, with historic Pula just 12km away, and Rovinj and Poreč within around 50 minutes’ drive.

Pula is known for its many fantastic Roman sights, which elevate this coastal city’s status. The most significant is the vast amphitheatre, known locally as the Arena, which is now the region’s premier tourist attraction. It doesn’t sit empty, as this magnificent arena hosts all sorts of entertainment including big-name concerts and gladiatorial fights (as per its original purpose). A 3rd-century floor mosaic and Pula Cathedral are among the other attractions for history enthusiasts.

Even if that’s not your thing, you’ll find plenty to entertain you. Pula hosts a major film festival each summer, with some screenings taking place in the amphitheatre, as well as music festivals. A contemporary art museum, showcasing the best Istrian art from the mid-20th century to today, is also worth a visit.

Further up the coast, stunning Rovinj is the area’s picture postcard destination. Looking out on a 14-island archipelago, this gorgeous town has great views, history, fine dining and culture. The Old Town’s most famous landmark, the Baroque church of St Euphemia, offers a stunning outlook from its bell tower, modelled on that of St Mark’s Cathedral in Venice.

Water sports and boat trips to the islands are popular ways to spend time in the area, as well as visiting the beautiful Punta Corrente Forest Park. Adventurous types may also like to take a dive down to see the wreck of Austrian steamer, the Baron Gautsch, which lies beneath the waves of Rovinj. A nice time can be had in nearby Bale each summer, courtesy of the Last Minute Open Jazz Festival, while bars around town often offer live music with a local flavour.

Elsewhere around the region, you have everything from the mountainous Učka Nature Park to water parks and cycling trails. Also look out for Poreč’s impressive Baredine Cave, Motovun’s International Film Festival and Svetvinčenat’s annual wine and cheese festivals. Most of Croatian Istria can be reached within an hour’s drive from Ližnjan, giving you near-endless possibilities for excursions in the region.

There’s loads to keep the kids entertained all over Istria. The region packs a lot in, and one of ...

There’s loads to keep the kids entertained all over Istria. The region packs a lot in, and one of the big attractions is Aqualand Istralandia. Just a few minutes’ drive from Novigrad on the west coast, this huge water park offers Croatia’s highest water slide, a hydromassage pool and kids’ favourites like Pirate Lagoon and the Space Rocket. Poreč’s Aquapark Aquacolors also delivers the goods, with a long lazy river and more giant water slides.

Less wet, but just as much fun, are the treetop adventures of Glavani Park. In a forest setting around 30 minutes north-east of Pula, this park is equipped with climbing nets, zip wires and big swings which drop from 11m up.

Motodrom Poreč offers exciting go-karting, with a track just for 6–12-year-olds alongside the main track for teenagers and adults. Also near Poreč, lovers of the prehistoric will embrace the theme of Dinopark Funtana. This pretty coastal town also offers the chance to go dolphin-spotting on an unforgettable boat cruise.

Umag’s Squirrel Park is a lovely place to learn about these creatures, with lots of activities for younger children. Also on a wildlife theme, the fragrant Istrian Butterfly Garden in Bale is another special sight.

Around 45 minutes from Ližnjan, the similarly named Višnjan is home to the Tican Observatory, which offers the chance to look up at the stars on certain evenings. Free to visit, it’s sure to be a memorable experience – and there’s even a piece of meteorite on display.

Closer to base, the city of Pula is home to the spectacular amphitheatre, known as the Arena, which is a true must-see. When you’ve got your photos and checked out the entertainment, you could also visit the nearby MEMO Museum. Unlike some museums, this one doesn’t take you back centuries – the interactive exhibit focuses on the 1950s to the 1980s, with examples of transport, technology, furniture, fashion and all sorts of other 20th-century bits and pieces. A fun and educational look at life in the former Yugoslavia. 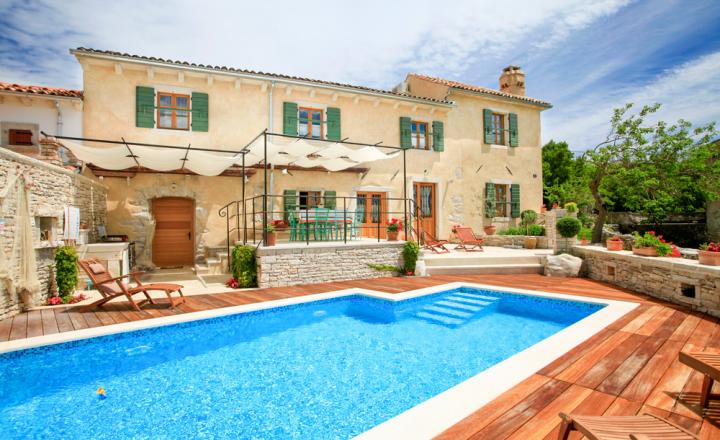 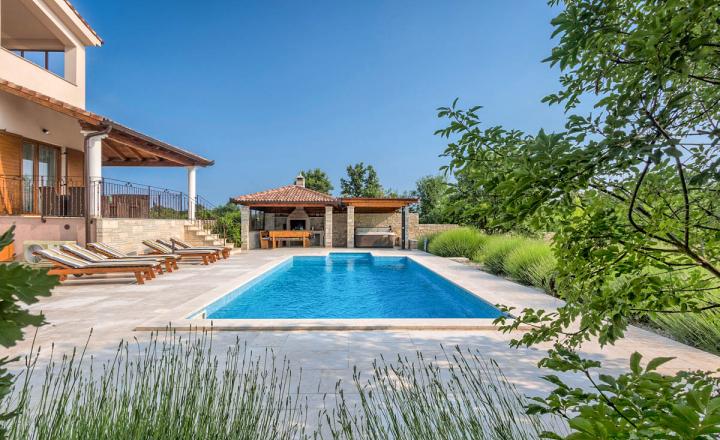 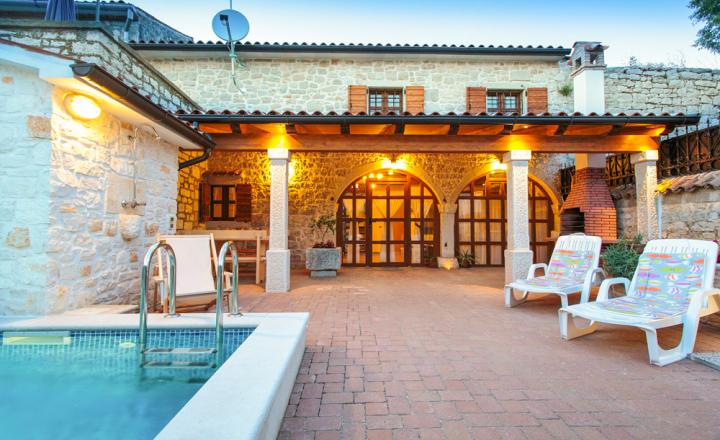 Ask a question about Villa Lilah