While most people hotfoot it to Bodrum and Marmaris on the southwestern coast for Turkey holidays, they’re missing a trick – the riverside towns of Akyaka and Dalyan. Part of the “slow city” movement, low-key Akyaka is wedged between pine-clad mountains and a silvery beach at the far end of the Gulf of Gökova. To the south, Dalyan is threaded with picturesque waterways and home to the ancient ruins of Kaunos. Both towns are rich in food, history and nature. Here’s our destination guide to Akyaka and Dalyan to help you make the most of your holidays in Turkey.

The best time to visit Akyaka is from late June to early September, but try to travel outside peak summer for Dalyan to avoid the package-tour crowds.

How to get to Akyaka and Dalyan 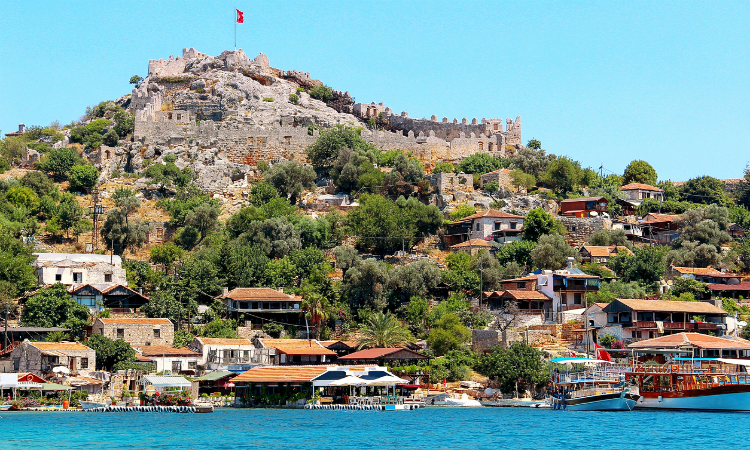 Between April and October, daily flights connect most UK airports and Dalaman, from which Dalyan is a 40-minute taxi journey. Ferries run from Marmaris to the outskirts of Dalyan, whereupon smaller boats continue on to the village. From Marmaris, Akyaka is a 25-minute journey by car. 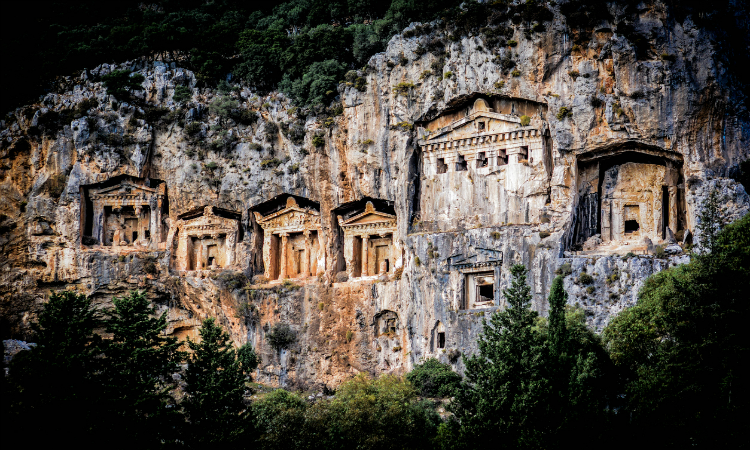 One of the best things to do in Dalyan is to visit the remains of Kaunos, an ancient port city dating back to the ninth-century BC. Small boats putt along the river from town, weaving past the incredible Lycian rock tombs hewn into the cliffs, to the atmospheric ruins, strewn with the remains of a theatre, bathhouse and acropolis.

Akyaka and Dalyan offer some of the finest traditional Turkish food. Akyaka is an emerging foodie hotspot, with excellent fish restaurants and day-fresh local produce at a daily market. Dalyan restaurants are of a world-class standard, many sitting on the riverbanks for views of the illuminated tombs.

Bordering a wetland coastland area, Akyaka hugs the banks of the Azmak River, which winds down to the harbour and silver-sand beach. As if that isn’t enough natural drama, the town is backed by protected forests and set against a mountainous backdrop. A meandering riverboat ride is one of the best things to do in Akyaka.

Life too revolves heavily around waterways in Dalyan. Boats chug along the river between Lake Köyceğiz, whose shoreline is dotted with hot springs, and İztuzu beach, the nesting site of loggerhead turtles. The sands are backed by marshes teeming with wildlife – storks, kingfishers, terrapins, herons.

The second town in Turkey to join the Cittaslow (“slow city”) movement, Akyaka has resisted unsightly development by setting criteria for architecture. First introduced by award-winning architect Nail Çakırhan in the 1970s, the town’s Ottoman-style whitewashed houses are punctuated with balconies and intricate woodwork, crowned with pine-timbered eaves and red roofs. Today all new buildings must adhere to this style.

Şirince, an art village near Akyaka

Things to do in Dalyan and Akyaka 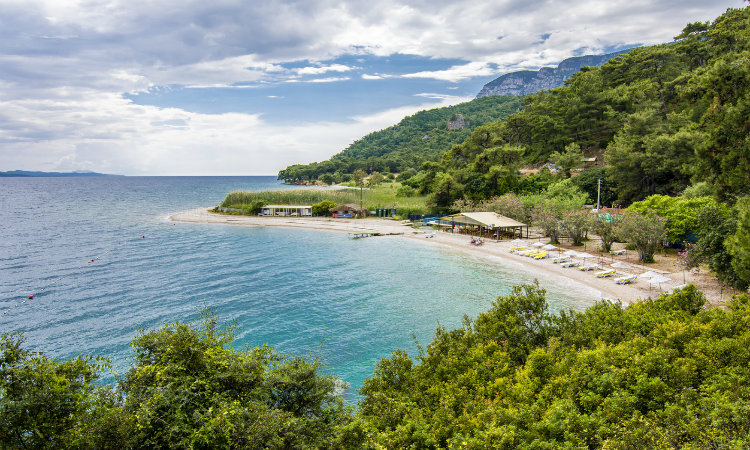 Akyaka Beach is a wide swathe of sand peppered with sunbeds and thatched parasols, close to a cluster of restaurants. Along the coast is secluded Cinar, home to a solitary beach bar, pebbly cove beach and calm, cool waters – all against a dramatic mountainous backdrop. Akyaka is a kiteboarding hotspot, thanks to its excellent surf, sandy shallows and warm winds. Head to Akçapınar Beach for lessons or equipment hire; try Kitesurfing Akyaka or the Kite Academy, one of the best in Turkey.

Near Dalyan, İztuzu is a long stretch of flour-fine sand, popular with swimmers and sunbathers. In summer, the beach is closed at night to protect the loggerhead turtles that come ashore to nest. Boats also ferry sun-seekers across the river mouth (dangerous currents prohibit swimming) to a smaller, quieter beach, shaded by pine trees.

Take a boat trip from Akyaka harbour to “Cleopatra’s beach” on Sedir Island, whose sand is believed to have been brought from Egypt by Mark Antony. Hellenic and Roman ruins are strewn across the island, including a stunning amphitheatre, partially reclaimed by gnarled olive trees. From here, you can also drive to the ruined city of Ephesus.

The jewel in Dalyan’s historic crown is the ancient site of Kaunos. The riverboat journey to the ruins is one of our top things to do in Dalyan, passing a series of 3,000-year-old rock tombs, beautifully carved into the cliff face high above.

For traditional Turkish food, you can’t go wrong in Akyaka and Dalyan. It’s all about the slow-food culture in Akyaka. Start in the daily produce market to sample street food favourites like gözleme (thin pancakes) and pide (Turkish pizza). Locally caught fish is a local speciality, served fresh in a clutch of restaurants hugging the banks of the Azmak River. Try Halil In Yeri for plates of superb meze prepared using olive oil and lemons from its own organic groves. Ev yemekleri (home cooking) cafes favour a simple, traditional Turkish food, such as soups and stews; a couple of good options are Ayse Ananin Yeri or Kristal.

Dalyan restaurants have long been on the radar of foodies. A string of restaurants along the riverbanks make the most of their picturesque location with wooden decks overlooking the Lycian tombs – illuminated at night. Try Aktaş Restaurant for meze – think antep ezmesi (spicy tomato salad), aubergine salad, geren (marinated samphire), grilled octopus.