Skopelos may not have the spectacle of Santorini or ooze glamour like Mykonos, but it has a quiet confidence that gets under your skin. Silvery olive groves give way to sprawling vineyards and plum orchards, the bounty of which can be found on taverna menus across the island. Part of the Northern Sporades archipelago, this forested speck can only be reached by boat – but that’s part of its charm. It’s remote and peaceful, with a rugged beauty that caught the eye of the location manager for Mamma Mia, the 2008 film adaptation of the Abba musical. Here’s our comprehensive guide to Skopelos holidays.

Skopelos is one of the few Mediterranean destinations that doesn’t get too overcrowded in July and August, but if you want the island at its most quiet (but still balmy), visit in June or September.

How to get to Skopelos, Greece 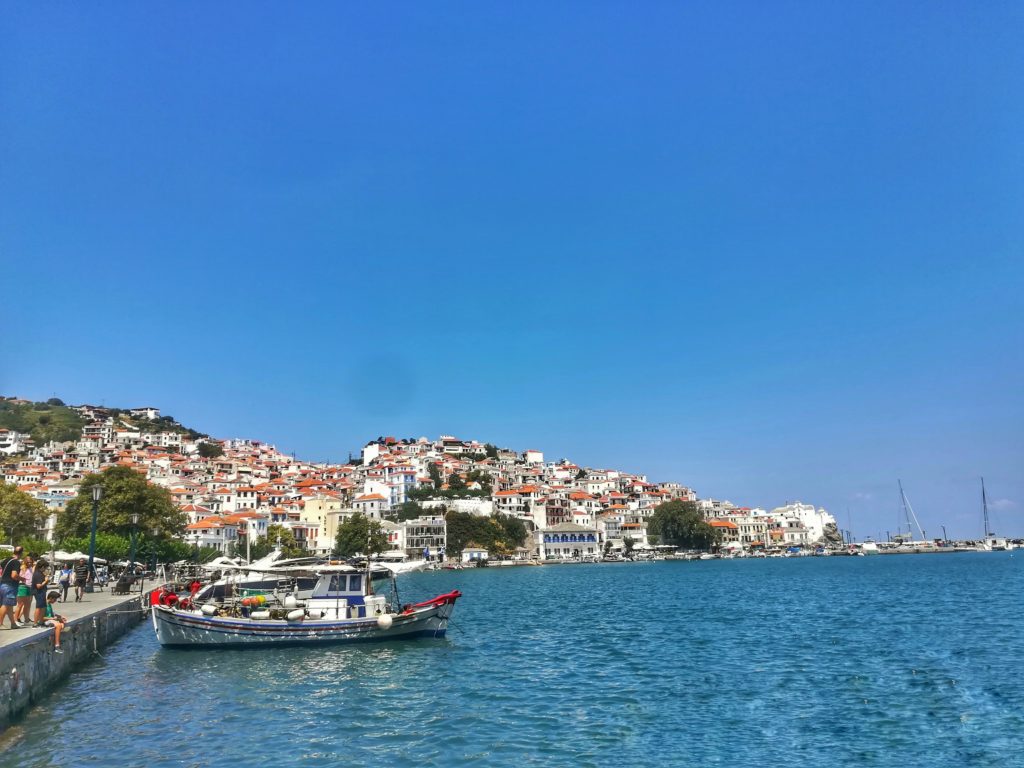 It’s no mean feat getting to Skopelos, but its location does fend off the masses. The nearest airport is at overcrowded Skiathos (brace yourself: it’s one of Europe’s shortest runways), followed by an hour-long ferry ride to this unspoiled gem.

Otherwise, you can catch a ferry from Thessaloniki (3 hrs) or Athens’ port of Volos (via bus from the airport). 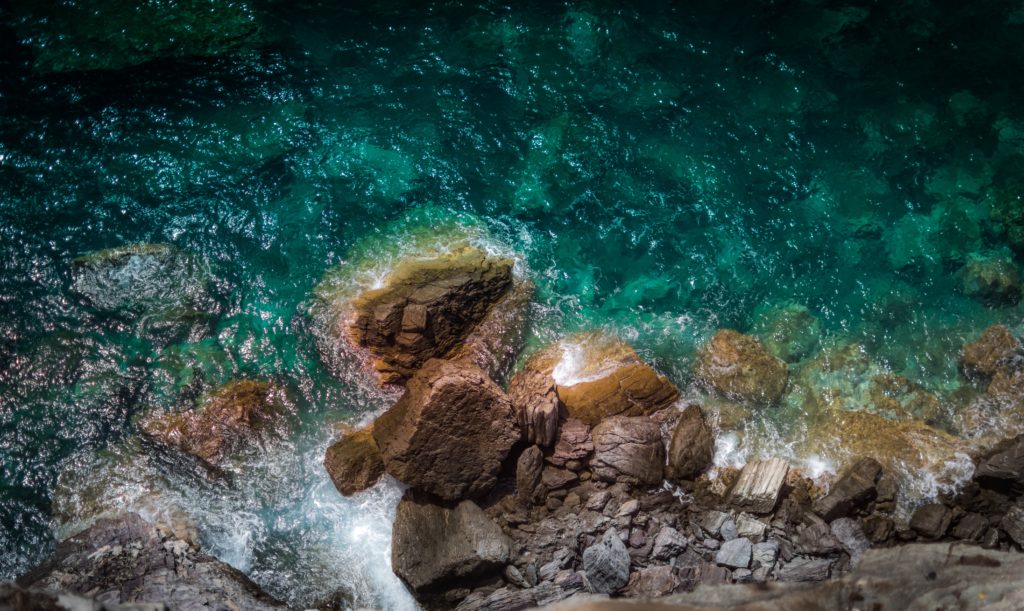 Skopelos may only be sprinkled with a handful of towns, but they more than make up for it in charm. Don’t miss Skopelos Town, a hillside sprawl of chalk-white houses and terracotta roofs, or Glossa, whose steep slopes are worth the slog for the fine views.

From breakfasts of Greek yoghurt and honey, to Kefalotyri goat-cheese pies for lunch and catch of the day for dinner – this Greek island draws on the natural larder of the island. To find the best restaurants in Skopelos, head uphill from the harbourfront of Skopelos Town to stumble across bougainvillea-draped tavernas; try Anna’s or Glifoneri. If you’re in Glossa, don’t miss Agnanti. Olive oil is the golden elixir of the island, with local producers like Antoniou Family Olive Press offering tours and tastings – one of our favourite things to do in Skopelos.

With its emerald-green forests and lapis lazuli waters, Skopelos has the subtle swagger of a film star. The beauty of it is that, despite Mamma Mia fame, the island hasn’t lost its authenticity. A far cry from overcrowded beaches and themed bars, it’s more about unspoilt island life – simple, rustic Greek food; quiet mountain walks; near-deserted beaches. It’s larger, but lesser visited than neighbouring Skiathos; its cragged scenery more pristine and less developed. This is one of those rare places you can unplug from modern life – it’s idyllic.

Skopelos is lined with picturesque sand-and-pebble beaches, backed by bottle-green hills. The most pristine stretches hug the western coast, although the southern counterparts tend to hog the attention. Kastani Beach Skopelos, of Mamma Mia fame, is one of the prettiest, while Armenopetra is just as breathtaking –without the crowds. 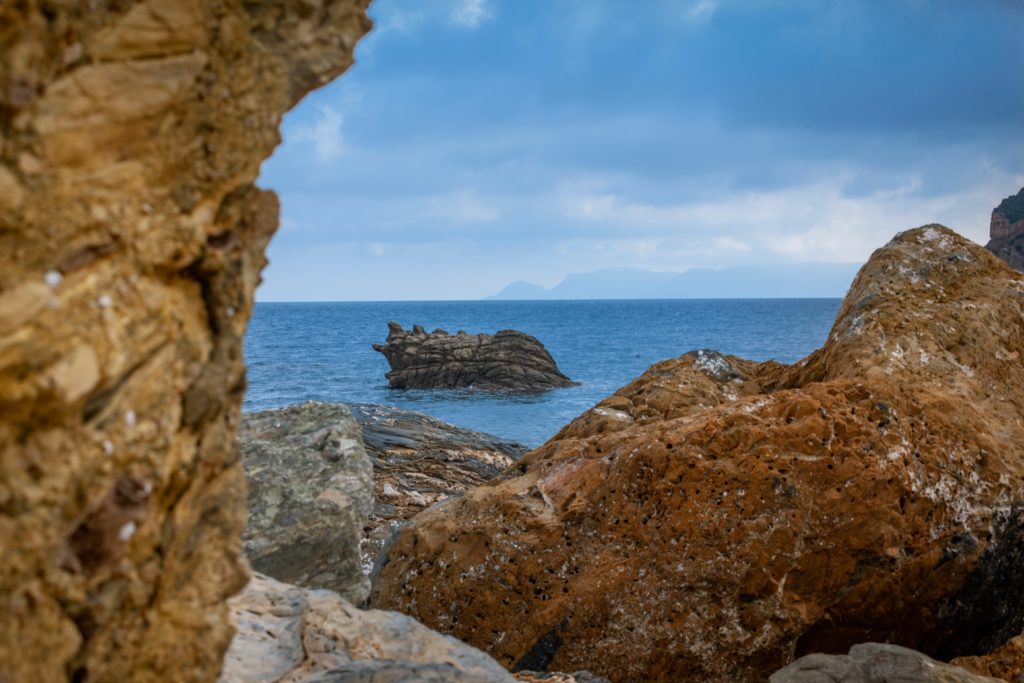 To escape the tourists at Kastani Beach, hire a motorboat in Panormos and head north to the stunning (and quiet) beaches of Hovolo, Ftelia or Neraki, accessible only by boat.

While most of the best restaurants in Skopelos Town are away from the harbourfront, the exception is Molos in the Old Port – a favourite of in-the-know islanders.

For drinks with a view, hotfoot it to the rooftop bar of Vrachos, shaded by gnarled olive trees and overlooking the port.

Things to do in Skopelos 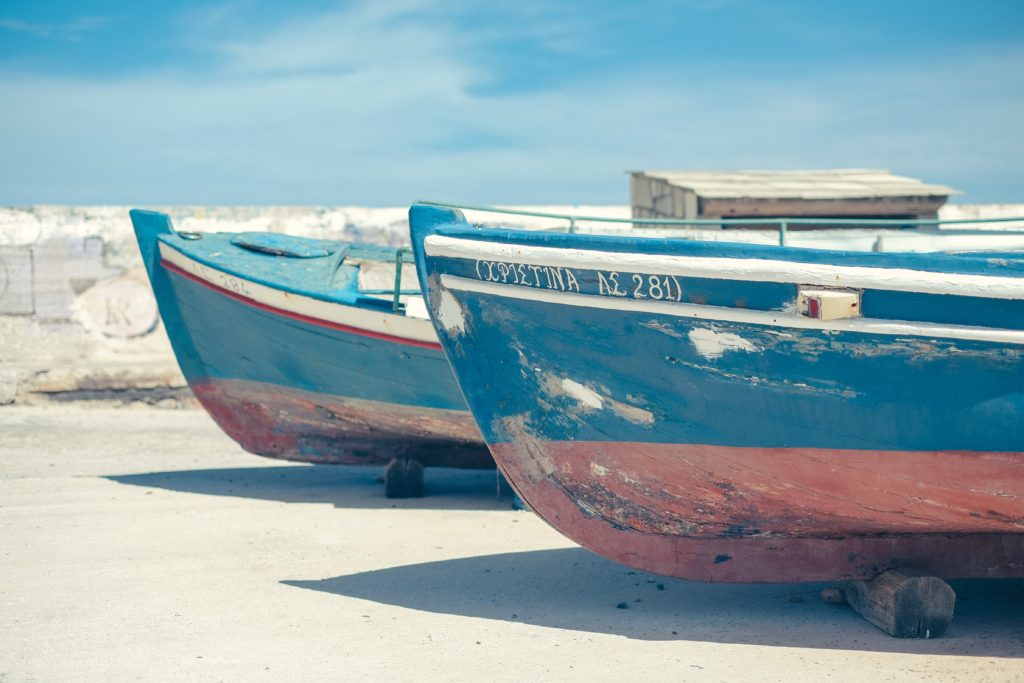 The main port of Skopelos Town, on the southeast coast, is a beauty: a vertiginous jumble of bougainvillea-draped buildings with colourful shutters and terracotta roofs, crowned by a crumbling Venetian fortress. Climb the web of pedestrianised streets to discover tavernas spilling out onto jasmine-scented courtyards and tiny churches with chiming bells.

In the far northwest of the island is Glossa, whose whitewashed houses hug even steeper streets. The pace slips down a few gears here: men play backgammon outside kafeneons and elderly women sweep the steps of their homes. A couple of dozy shops sell plums, almonds, oil and wine, closing in the heat of the day – the best time to climb the near-deserted streets to the town square – among the island’s finest viewpoints. Strolling this picturesque town where time appears to stand still is one of our favourite things to do in Skopelos.

Mamma Mia fans can take a self-guided tour of the film locations that thrust the island into the limelight – singing optional. First up, shimmy across the sands of Kastani Beach Skopelos – the setting for most of the dance scenes – before a cool drink at the beach bar. Next, head to the improbably located church of Agios Ioannis Kastri, perched atop a 100m-high rocky outcrop, where the wedding scene was shot. For both attractions, visit either early morning or evening to avoid the coachloads of tourists.

Skopelos is peppered with monasteries: tranquil havens with icon-adorned chapels and intricate altars. While you can loop around these ecclesiastical sites by car, scenic hiking trails connect some of the more off-grid places of worship. Set off on foot from the 16th-century Sotiris monastery and join the T1 walking path, which weaves through the forest-pocketed mountains and offers dramatic views over the island of Alonnisos. You’ll end up at the abandoned monasteries of Taxiarches and Anna, partially shrouded by huge walnut trees.

If you fancy a slice of Skopelos, check out our luxury villas for a beach holiday you won’t forget in a hurry!