It doesn’t matter if you are a seasoned surfer or you’re just starting out; Portugal is one of the most surfer-friendly countries out there. Portugal’s expansive coastline, 1,793 kilometres (1,114 miles) is dotted with open beach breaks, concealed beaches, and some of the best surf spots in the world. Throw in the pleasant climate and the longest swell window, you’ll quickly discover why it’s loved by so many. So without further ado, it’s time to get the lowdown on surfing in Portugal. 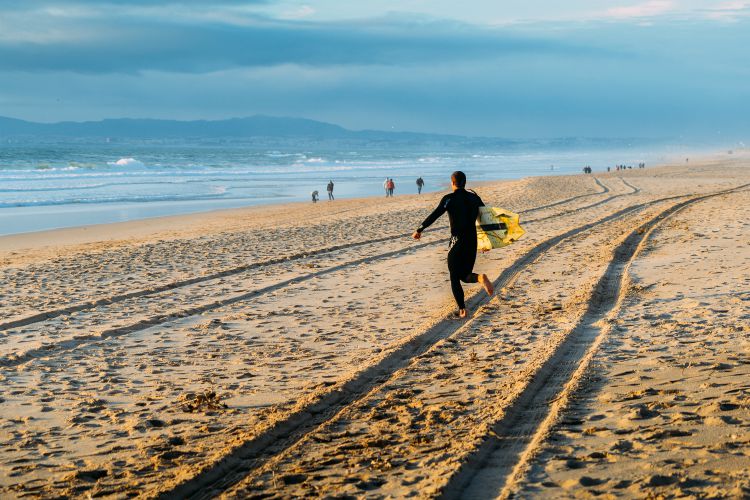 Travelling surfers tend to give Lisbon a miss, due to the hassles of parking and crowds, but still, the capital is in close proximity to some rad waves, you just need to know where to look.

To the south, you’ll find Costa De Caprica, which provides a long stretch of beach, divided up by jetties, and lined by a promenade featuring a string of nice restaurants and bars. It’s a classic, the waves are consistent but easy to manage – but hey that doesn’t mean you can’t have fun right? Carcavelos, for example, is still considered one of Portugal’s best beach breaks, offering barreling lefts over shifting sand bars, however, its proximity to the city means the crowd can be overwhelming.

Good to know: Beginners wanting to surf in Lisbon should visit early summer as the waves are rather small. Even though the temperature of the air might be high—around 30°C – the water remains cold (18°C) and a wetsuit is required. Meanwhile, the most experienced surfers should arrive between December-February. 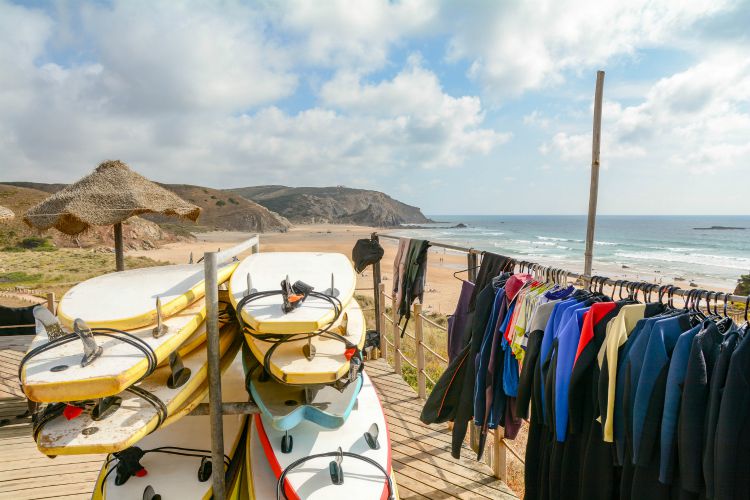 The Algarve is quickly becoming synonymous with surfing, and each year more and more people visit the region to taste the waves. You’ll notice that anyone with intentions to surf stay in the area of Sagres. Here the sea is rough and there are bigger waves. In this region, surfing and nature-related activities are the main tourist attractions and the beaches in this area are known as a paradise for surfing and windsurfing. Some popular beaches for surfing around Sagres are: Praia do Martinhal, Praia do Tonel and Praia do Zavial.

Alternatively, you can set up shop on the west coast of the Algarve which is bustling with wildlife and sandy beaches. Better still, the area is protected, so the mountains will set the backdrop to your water pursuits. The water conditions are just as great here due to the big waves from the Atlantic Ocean.

Good to know: If you’re going to the Algarve for some sun in general and surfing is just one of the many things you have planned, then we would recommend planning your trip between May and October.  Whereas independent surfers should avoid the summer months, and it should be said that the winter in the Algarve is still quite mild and almost feels like spring. 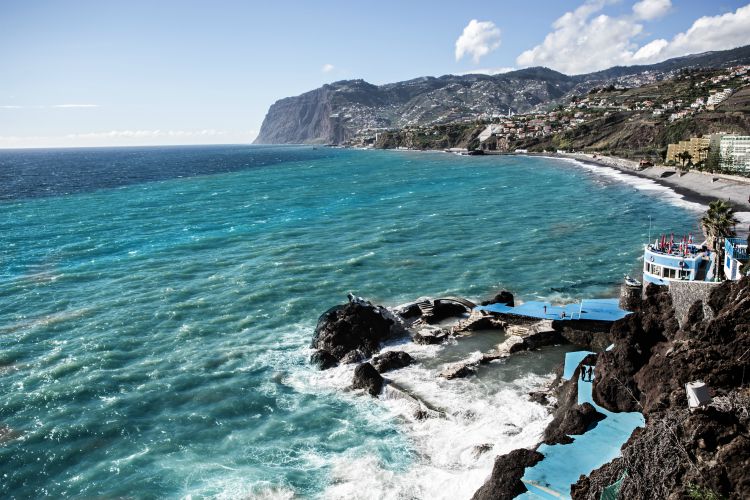 The first surfers touched Madeira in the 1970s and unveiled the archipelago’s potential to the world. And yet surf tourism is a relatively recent Cinderella story. The best spots are located on the southwest coast of the island. Jardim do Mar is one of them. Arguably the probably the most famous spot in Madeira, but only intermediate and advanced surfers will tame it.

Most visiting surfers stay here or in Paœl do Mar, as the area offers consistent surf at a variety of spots. Plus if the wind turns on the south coast, which can happen during stormy weather, the north shore is only a 40-minute drive away and usually protected from the southerly winds.

Good to know: Summers fall flat, so surfers are encouraged to visit from October through March with November to February considered as the prime months. 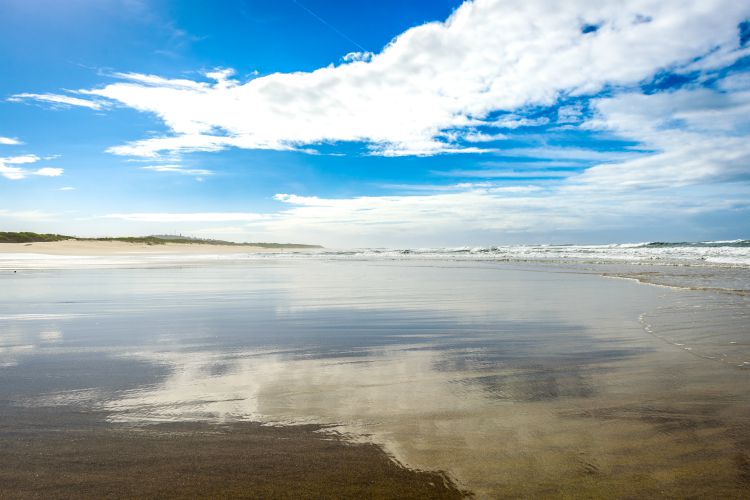 The northern provinces of Minho and Douro have largely skipped the attention of visiting surfers, despite having a trove of surf and cultural resources. The jewel in the region’s crown is Afife, an uncrowded and high-quality beach break, which produces fast hollow waves often.

Further south the area also boasts an epic left-hand reef-break at Pòvoa do Varzim which provides wide, shallow kegs on a SW swell. Miramar also hosts a fickle right-hand reef, which also offers barrels on a solid NW swell. The best and most famous spot in the region is Espinho, however, it often suffers pollution, heavy crowds and localism.

Good to know: Northern Portugal’s coastline, known as the green coast welcomes laid-back surfers and other watersports enthusiasts while divers are attracted to its marine life and numerous, interesting wrecks. We’ve put together a list of the best beaches in the Minho region – give it a read! 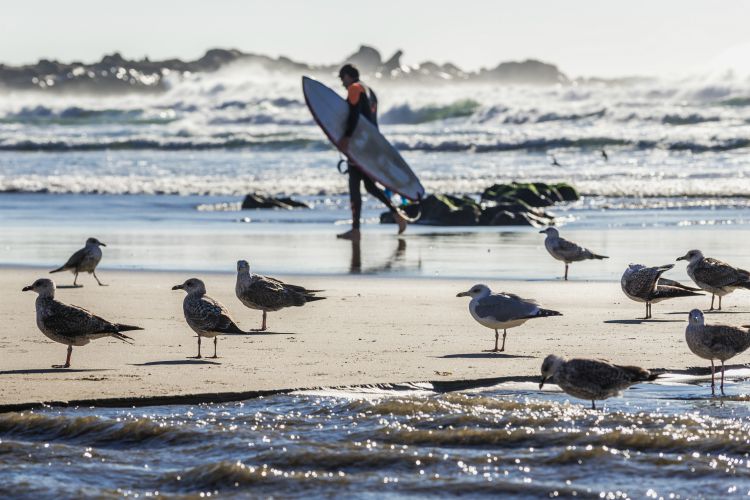 Generally speaking, the beaches in the north are overlooked when compared to the southern parts of Portugal. But there’s still a cool spot or two for some surfing. Granted, the water is way, way cooler, but that’s never stopped free-spirited travellers before.  A few spots to mark on your “must visit” lists include Viana do Castelo, Matosinhos, and Espinho. Experienced surfers should give the waves of Praia do Cabedelo in Viana do Castelo a go. The winds are mighty, which means windsurfing can also be enjoyed. Win-win.

Good to know: Spring through autumn marks the best time to surf in Porto. We recommend that beginners and intermediates start with Matosinhos beach. Its a long 1km sandy beach with a few different points on it. The set up is a mix of beach break and reef break and parts of it are sheltered so it handles larger swell.

We bet your mind is already set on making waves, so make the rest of your holiday planning easy on yourself! Get in touch with our concierge team who can help you find a villa close by to the best surfing in Portugal.