The England Coast Path is due to be finished in 2020, and the biggest of the bunch so far, the South West Coast Path covers 160 miles of coastline! You can either choose to walk the full amount or you can break it up and choose one of the most popular itineraries… one thing’s for certain, whichever walk you decide to do you’ll find gorgeous scenery, sandy beaches, surf spots and lesser-known gems along the way.

So, without further ado – here are the top South West Coast Path walks and the villas where you can kick off your hiking boots and snuggle under the covers (or just head to the nearest village pub!). 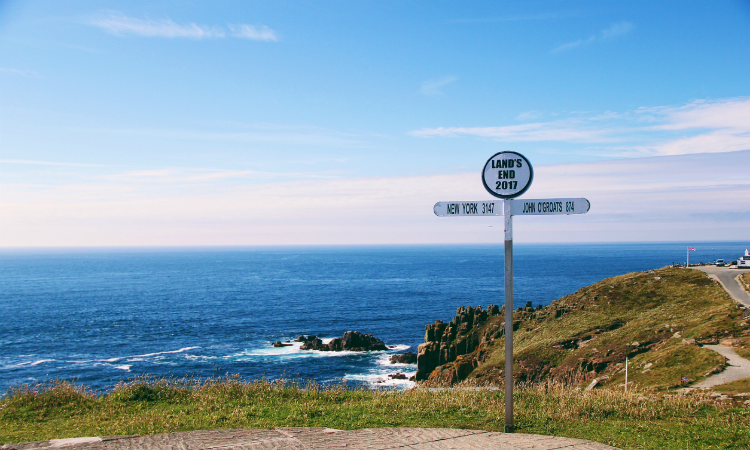 The sub-tropics of England! On this lengthy – but rewarding – walk you’ll traverse many different coastal landscapes, from beaches and inlets to cliffs and valleys. The trail will take you through an array of charming fishing villages, such as Sennon Cove and Mevagissey, where you can taste the catch of the day, to nostalgic seaside resort towns like St Ives and Newlyn where you can pick up an ice cream – ward off the seagulls – and build sandcastles with the kids.

This walk ticks off the two most southerly points of mainland England, you’ll pass through Lizard Point, the most southerly point of mainland England, where you can explore maritime history and learn about the infamous shipwrecks of the area before heading off towards Land’s End the most south-westerly point of England – and one of the most famous landmarks in the country – with its dramatic cliffs and world-famous open-air theatre, Minack Theatre.

Valley of the Rocks

This walk ticks off the first 35 miles of the South West Coast Path, covering the entire coastline of the Exmoor National Park all the way to the scenic, coastal village of Combe Martin with its picturesque harbour. This walk is all about the dramatic, wild scenery of the English coast, as you’ll hike up cliff paths and moors which boast incredible views out to the ocean, discover beautiful waterfalls and streams amongst colourful flora and fauna and be led to the Valley of the Rocks – an impressive rock formation 1km west of Lynton where you’ll feel like you’ve been dropped into a fantasy novel. 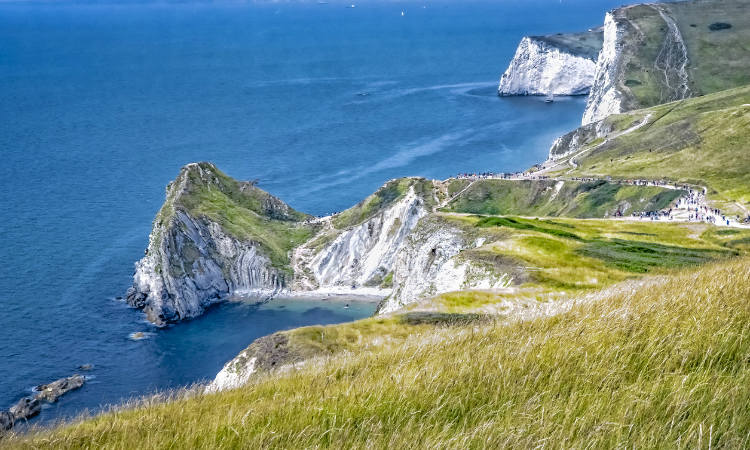 One for the dinosaur lovers, this 95-mile walk takes you from Exmouth to Poole, aka The Jurassic Coast – one of England’s first UNESCO World Heritage Sites. Take a journey through 185-million-years of England’s history as you explore ancient red and chalk cliffs, famous rock formations like Durdle Door, and beautiful nature reserves (not to mention hunting for fossils in Lyme Regis or Charmouth!). Dive boots first into the Triassic, Jurassic and Cretaceous periods of England, while also being able to enjoy charming coastal towns and villages.

A relatively undeveloped stretch of coastline, this section covers a little bit of everything for everyone. Bird watchers will love the Estuary Nature Reserve, and you can experience England’s tropical rainforest (well, the closest thing to it) at Undercliffs National Nature Reserve. Magical woodlands attract wildflowers and butterflies, and chalky cliffs command impressive ocean views, giving this walk a particularly wild feel, unlike any other section of the South West Coast Path. Plus, the selection of towns and villages with their harbours, beaches and – most importantly – cosy pubs, give the perfect places to unwind after a hard day’s walking! 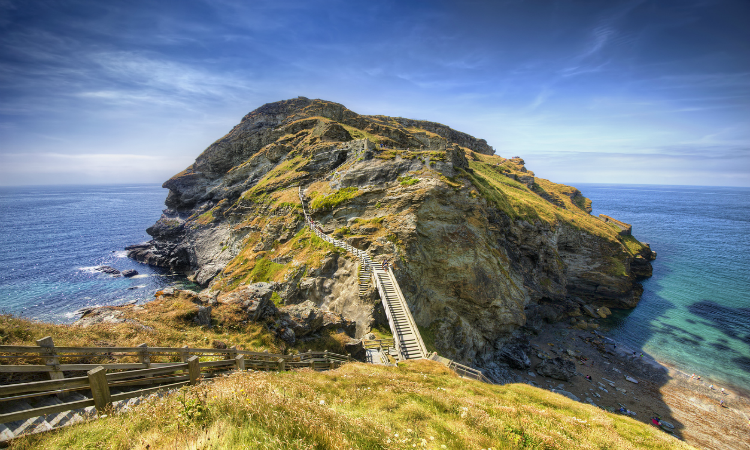 Castle ruins, river valleys and ancient pirate stronghold’s, this 47-mile trek takes you from Clovelly to Tintagel and is equal parts historic and scenic – not to mention, incredibly interesting. A short walk in comparison to some of the others on this list – this should only take you 4 days – however, it’s also one of the toughest with plenty of strenuous climbs. The effort will be rewarded though, with a contrast of landscapes from luscious valleys and woodlands to secluded, stark stretches. Plunging waterfalls, rocky beaches, lofty clifftops and steep valleys… the ascents and descents can be pretty relentless at times!

This walk will take you through some intriguing tales of history from the sites of notorious shipwrecks between Morwenstow and Bude to the legends of King Arthur when you end your journey in Tintagel.

The Nautical Coast – Plymouth to Dartmouth 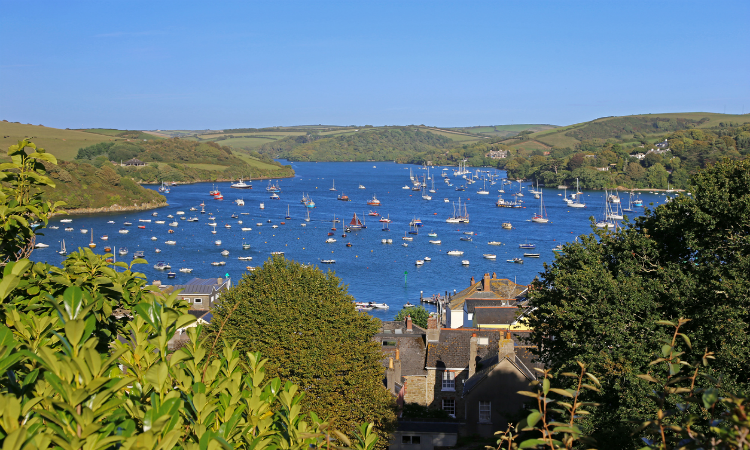 It’s all about the maritime history on this nautical coast walk, starting from the harbours and dockyards of Plymouth to the attractive old port of Dartmouth. This trail covers a lot of rugged coastline, through an Area of Outstanding Natural Beauty and over headlands with outstanding views.

Plymouth is, of course, home to the largest naval base in Western Europe (Devonport) and where Sir Francis Drake’s legacy lives on. Once you’ve got your fill of naval history, the walk will then take you to the pretty port of Salcombe, famous for its summer regatta held in August. On your trek from Salcombe to Torcross, you’ll find beautiful sandy beaches amongst rocky cliffs, which on windy days can give off a different vibe as waves crash mercilessly into the cliffsides – no wonder the area has claimed so many shipwrecks in the past!

Then you’ll eventually end in Dartmouth, home to an infamous Naval College where commanders learn the ropes. And it goes without saying, the amount of fresh and tasty seafood in the pubs and restaurants along the way is second to none! 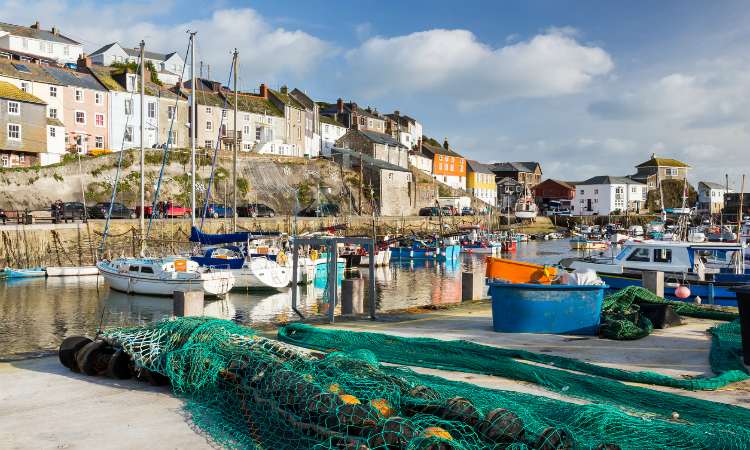 Smuggling coves, unspoilt beaches and atmospheric fishing harbours, the Smuggler’s Trail (Falmouth to Looe) ticks a lot of landscapes, activities and sightseeing off the list. For starters, the nature of the trail is extraordinary, from the rock face (aka The Jacka) hiding a tiny village and the fine sand beaches to remote and mighty headlands.

Then you’ve got the historic gems along the trail, starting at Henry VIII’s St Mawes castle, stopping off at the Tall Ships Harbour in Charlestown before visiting the dramatic St Catherine’s Castle. And, last but not least, there are the welcoming fishing villages where you can sample the freshest catch of the day, wash it down with a lovely ale and soak up the lifestyle of local fishermen. There’s the harbour village of Portloe, well-known for its crab and lobster fishing, the vibrant old town of Mevagissey, an old haunt for Cornish smugglers, and the bustling fishing harbour of Looe, home to some great sandy beaches!

Brean Down to Minehead 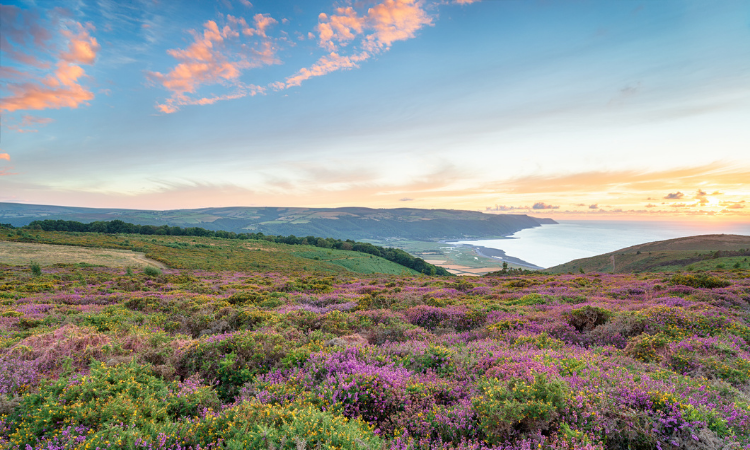 Follow in the footsteps of poet Samuel Taylor Coleridge when you opt for this stretch of the England Coast Path. Allowing you to take in all the natural beauty of Somerset’s coastline, this four-day walk can be managed by beginners, making it a popular route for families with teens looking to reconnect with each other and the world around them. Contrasting the sandy beaches of Burnham-on-Sea and Berrow with cliff formations across Lilstock and Blue Anchor, it’s sure to keep amblers of all ages entertained.

Take a hike up the North Hill and you’ll be rewarded with stunning panoramic views – and an insight into the next section of the path, if you’ve still got some energy left in you! 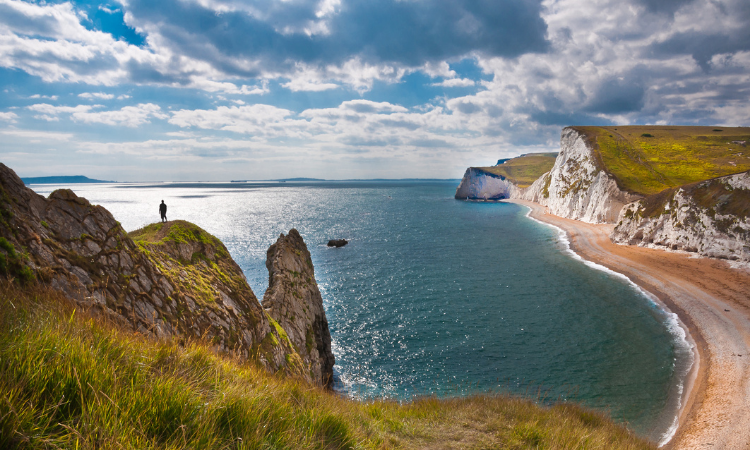 This particular stretch of the England Coast Path was the first to open in 2012, allowing spectators to watch the Olympic sailing competitions. You’ll start in Portland, taking in all its quarry history of Portland, before moving on to the sloping sandy beaches of Weymouth. Towards the end, committed walkers are rewarded with stunning views of Durdle Door and Lulworth Cove – perfect for avid geographers who want to see some of the coast’s finest natural forms up close.