The North East of England – a region known for its rolling hills, quaint seaside towns, rugged coastline and fish and chips wizardry. The North East Coastal path stretches from the Scottish Borders all the way to the Wash; currently, 162 miles of coastal paths have been opened, with a view to open more to connect the whole England coastline and make up the England Coastal Path – the longest coastal walk in the world!

We’re going to break down the types of coastal walks you can do on the North East Coastal Path, as well as which of our villas you can retreat to and relax in after a long day of walking. 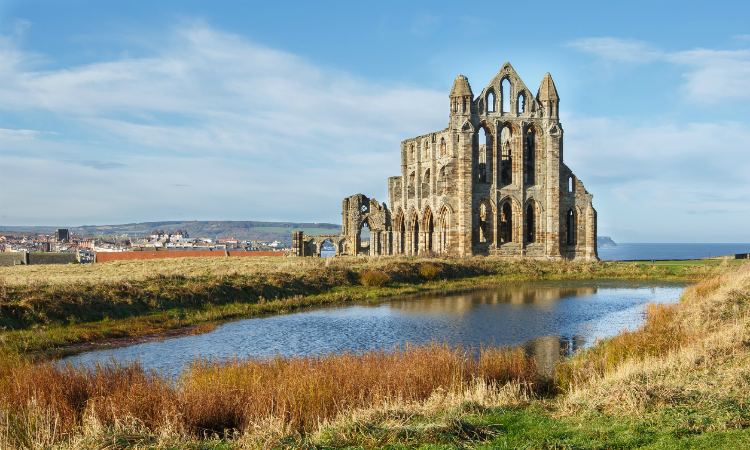 A little bit of a history and a whole lot of stunning views and cute coastal villages! This walk will take you from the charming Victorian spa town of Saltburn-by-the-Sea up to the equally charming Victorian resort of Filey. On this 5-day walk you’ll climb up Boulby Cliff, the highest cliff on the eastern coast (666 ft), find yourself in the famous seaside town of Whitby – where you can explore the streets where Bram Stoker’s ‘Dracula’ lurked around – and where you can also visit the ruins of Whitby Abbey, discover the higgledy-piggledy cobbled streets and laneways of Robin Hood’s Bay and the vibrant family-friendly seaside resort of Scarborough, with its large golden beach, promenade and old-school arcades.

If you want to do a slightly shorter walk, the Cleveland Way (68km) takes you from Saltburn-by-the-sea to Scarborough, missing out Filey – taking you 4 days to complete. We recommend you push through though and do the full 5 days because the picturesque Filey is a wonderful place to visit, and its beach was voted #6 in TripAdvisor’s 2019 Traveller’s Choice Awards best beaches in the world for kids. 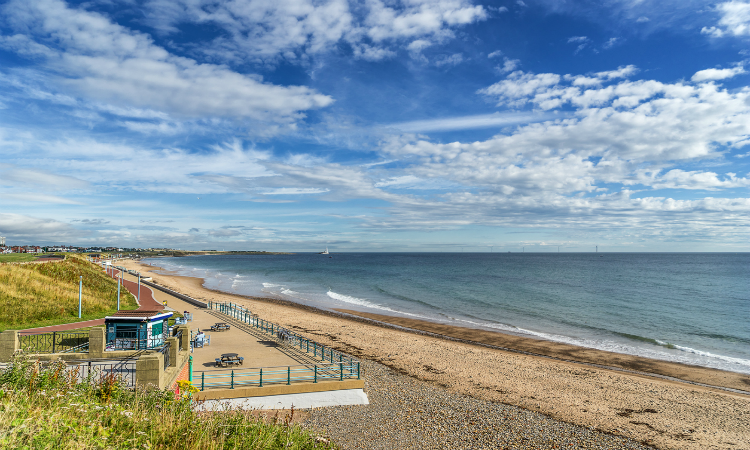 Stretching further north towards the Scottish Borders, this nifty little walk is full of northern charm, with rugged scenery and real old-school seaside vibrancy. The trail starts just north of Sunderland, and is dotted with Blue Flag beaches backed by lofty dunes, arcade-filled promenades and fishing villages. Not only this, but this walk through Northumberland offers up plenty of history with its ancient castles, and wildlife-spotting at its nature reserves.

South Bents is where the walk begins, with its Blue Flag surf beach, and then takes you straight through the bustling seaside resort of South Shields – home to a waterfront funfair and arcades (great for that nostalgic seaside day out!). You’ll hop over the River Tyne to Whitley Bay, an old fishing and mining settlement with quaint fishing harbours, historic ruins and a selection of Blue Flag and unspoilt beaches, before heading up to the quaint port town of Amble within Northumberland’s Area of Outstanding Natural Beauty.

Some of this walk actually takes over the former Northumberland Coast Path. 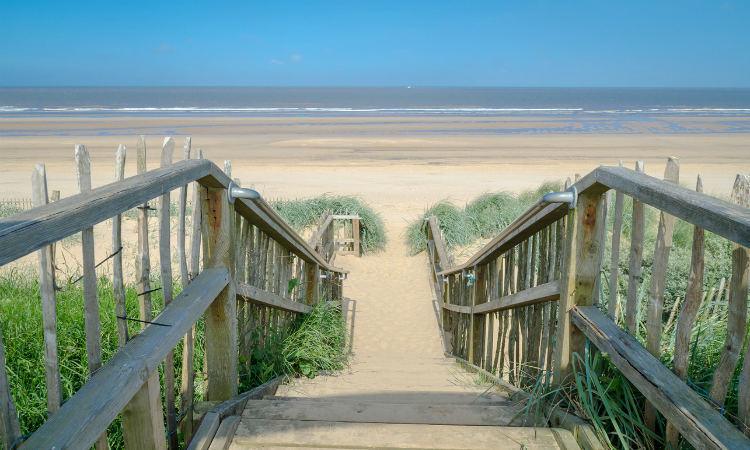 Although technically part of the Midlands and not the North East, due to the sectioning of the England Coast Path the Lincolnshire coastline has been pulled into the North East Coast Path. This trail is all about the wildlife as you explore Anderby Marsh and Chapel Pit, havens for birdlife, and Wolla Bank Reedbed, great for otter spotting. With great sandy beaches, wild dunes, a submerged forest from the Neolithic period – yes, really – and the world’s first official cloud spotting area at Anderby Creek’s Cloud Bar, it’s definitely an intriguing trail. 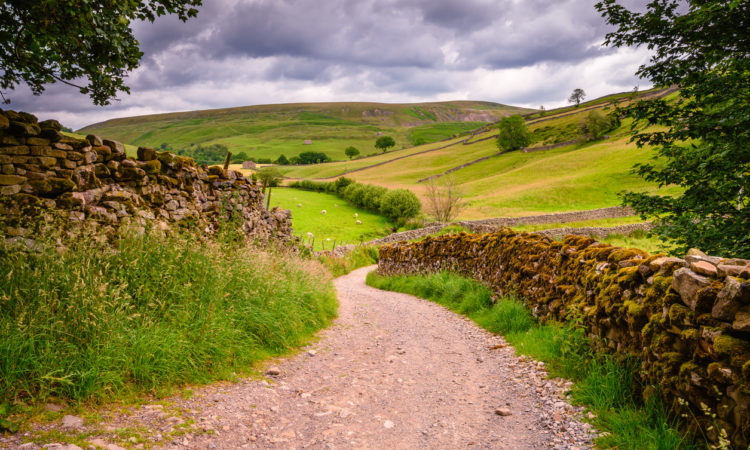 This route is partly caught up in the Cleveland Way – a large trail which covers the North Yorkshire Moors. A large stretch of the England Coast Path, this route takes in the crumbling coastline, the seaside resorts of places like Scarborough and Whitby, the rolling moorlands of the North York Moors National Park, and along into the heart of Middlesborough. Not only a fusion of industrial, scenic and coastal beauty, but this route also has a historic edge.

This walk along the Durham coast is underpinned by a tough mining history, with much of the coastline ravaged by the mining industry until the 90’s when it was shutdown and it began to repair itself. The introduction of the Turning the Tide project has helped to revive and conserve it as an important part of Durham’s heritage. It’s now a wonderfully rugged stretch of coastline that you’re able to walk, crossing through Hartlepool, Durham and ending at South Bents, just north of Sunderland.

Wander through maritime towns, seafront promenades and heritage trails, and marvel at the gorgeous wildflowers, which the area is famous for and attracts numerous species of wildlife. The TTP helped to create more habitats in the Durham Coast’s grasslands (the area has 92% of Britain’s Magnesian Limestone grassland habitat!) for species such as the Purple Sandpiper and Little Tern.