Cyprus is a tapestry of sublime beaches, ancient wonders and dramatic landscapes. Vibrant towns and sleepy villages are tucked into the folds of vineyard-dotted mountains, where locals share their culinary traditions and warm hospitality. Steeped in mythology, the birthplace of the goddess Aphrodite has overcome a complex modern-day history to experience a rebirth of its own. Here’s our Cyprus travel guide – a perfect read before your holiday to Cyprus.

Cyprus has scorching summers, with a more pleasant heat in spring – which often arrives as early as February. Go for May and June for optimum temperatures, although September and October are still warm – with lower prices.

How to get to Cyprus 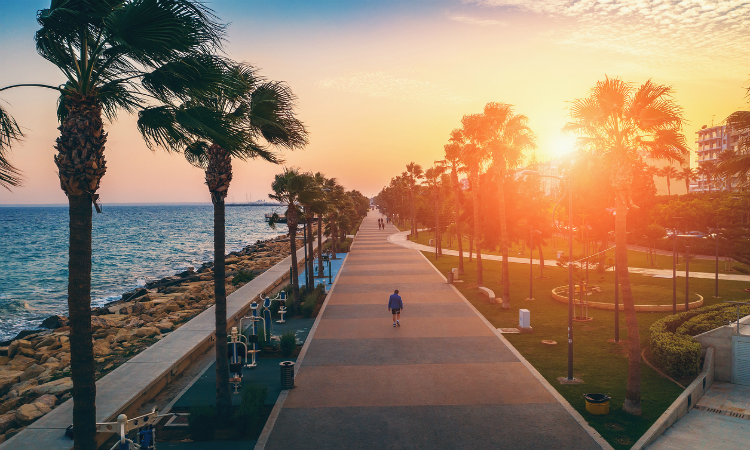 Several airlines, including British Airways, EasyJet and Thomson, run direct flights between UK airports and Larnaca or Paphos. Buses and shuttle services then connect to the main city centres, with select routes continuing to Limassol. 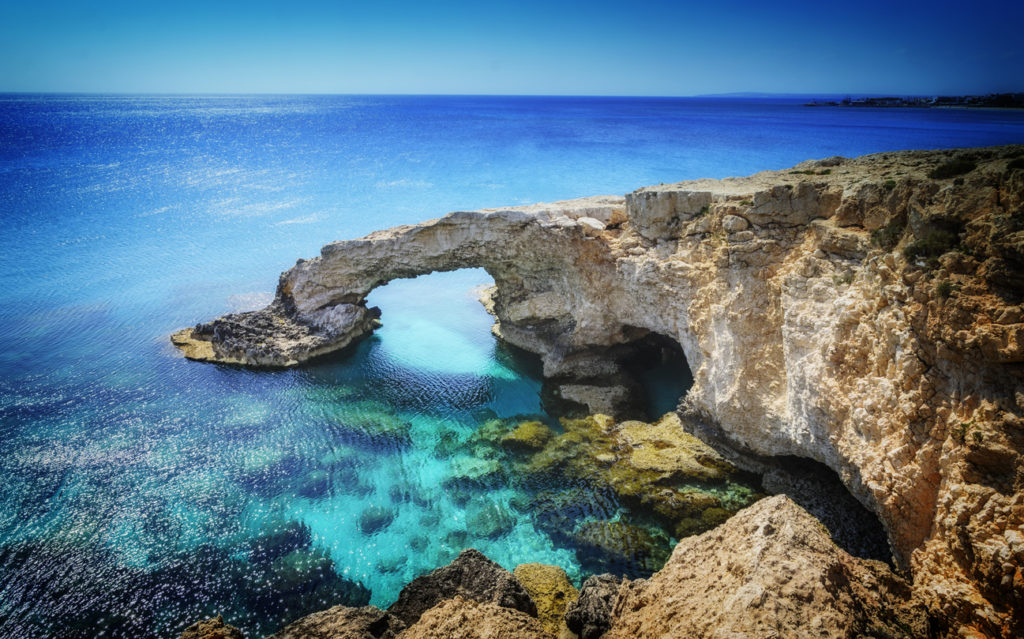 Cyprus may be famed for its sun-bleached sands and crystal-clear waters, but head away from the coast and you’ll discover wildflower-carpeted meadows and vine-combed valleys. The Troödos mountain range is the forested spine of the island, best explored on foot or by bike – or skis, come winter.

Paphos has the longest coastline of any district in Cyprus, winding northwards from Aphrodite’s Rock to the Baths of Aphrodite and beyond. Among the best beaches in Cyprus is secluded Lara Bay in Paphos, where sea turtles nest on the sand, and Kourion Beach, beneath the famous archaeological ruins.

Cyprus is a floating jigsaw puzzle of ancient ruins and medieval fortresses. The island’s complex history can be pieced together through the Neolithic dwellings, Bronze Age tombs, Roman mosaics, Byzantine churches and ruined Lusignan and Venetian castles that are strewn across the countryside.

Cyprus food is a mix of Southern European, Middle Eastern and Central Asian influences. Meze is one of the island’s most social dining occasions: communal tables piled with plates of grilled halloumi, koupepia (stuffed vine leaves) and sheftalia (spiced sausages). Be sure to try souvlakia – pitta stuffed with chargrilled pork or chicken, salad and tzatziki – and save room for loukoumades, deep-fried doughnuts soaked in honey. For authentic Cyprus food, avoid tourist traps and instead opt for traditional tavernas and ouzeries – local haunts that pair ouzo and small plates. 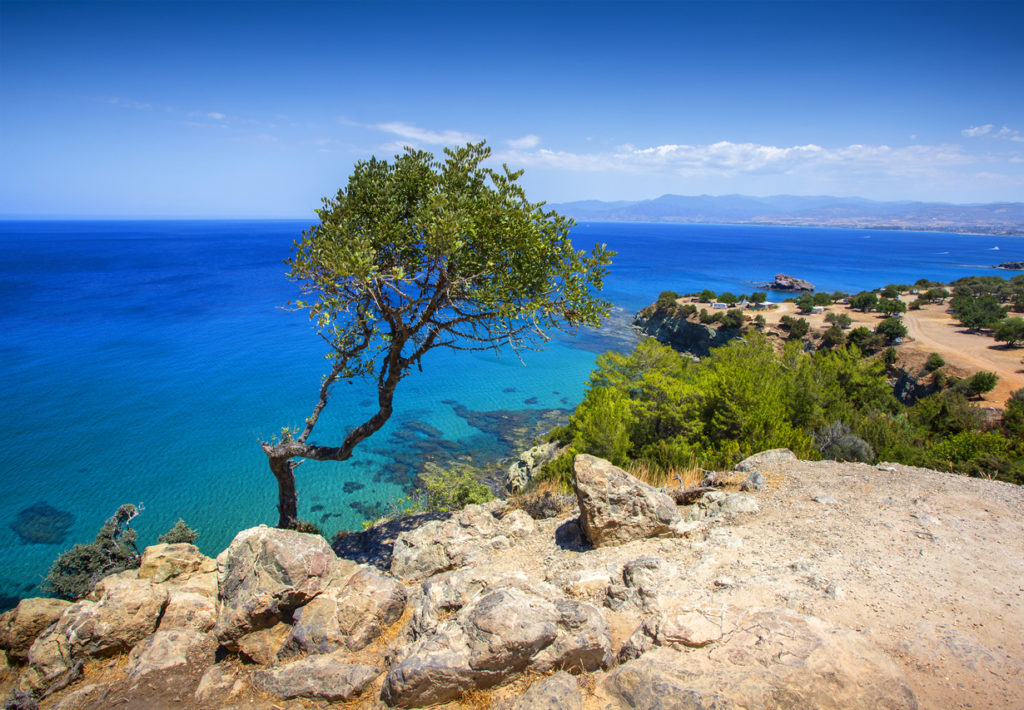 • Head off-grid to the Akamas peninsula in Paphos to discover some of the best beaches in Cyprus, remote nature trails and rocky gorges.
• Visit the curious town of Maliá, whose hilltop mosque is a legacy of the time when Turkish Cypriots made up much of the population here.
• Ask any local what to do in Cyprus, and they’ll suggest visiting Pomos for its near-empty beaches, boat-speckled harbour and seafood tavernas.
• Check out the silvery dunes of Limassol, rarely visited for their remote, secluded nature – except by nesting turtles who lay eggs in the silky sand.

Things to do in Cyprus 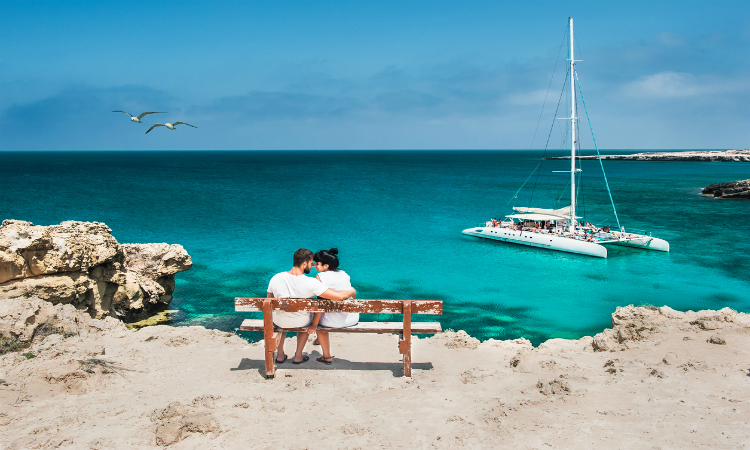 Southern Cyprus has two main port towns – with very different personalities. The exclusive Limassol has an old quarter of tavernas, galleries and bars, arranged around a covered market. The small medieval castle concealing an excellent museum is one of the many things to do in Cyprus with kids. Limassol is also a convenient base for visiting the outstanding archaeological sites of Amathus and Kourion, and the Crusader castle in Kolossi. The lesser-known Larnaca hugs the shores of a salt lake – often hidden beneath a pink cloud of flamingo – and palm grove. Although sleepier, the town is undergoing regeneration following the building of a new seafront walk- and cycle-way.

Soak up the charms of big-hitter Paphos

Some of the must-see Cyprus sightseeing is in Paphos, the Cypriot capital in Greco-Roman days. The city is divided into two parts: Kato Paphos, a pretty harbour and palm-fringed seafront, from which backstreets lead to medieval baths and archaeological sites. Standouts include the Paphos Archaeological Park, scattered with the ancient ruins of a fourth-century BC city, and the Tombs of the Kings, a necropolis of caves and tombs for the local nobility. Unfurling inland and uphill, Ktima is the historic core where locals go about their daily lives as they have for millennia. Elegant colonial buildings house a clutch of museums, including the Ethnographical Museum and Paphos Archaeological Museum.

Cyprus is an outdoor adventure playground. In the summer, go mountain biking or hiking through the Troödos range, and come winter, switch your walking boots for skis. Alternatively, head to the coast for adrenaline-fuelled water-sports, from windsurfing to kitesurfing. Head offshore for scuba diving among shimmering coral reefs and shoals of brightly coloured fish – one of our favourite things to do in Cyprus.

Discover the divided capital of Nicosia

Nicosia, or Lefkosia, is a divided capital, sliced down the middle by the Green Line. This de facto partition is the result of the 1974 Turkish invasion that seized the northern part of the island. Recently, an easing of tensions has made it easier for travellers to immerse themselves in two distinct cultures – Greek and Turkish, Christian and Muslim – simply by crossing between the two halves of the city, via a passport check at Ledra Street. Sixteenth-century Venetian walls wrap around the old town, which contains the Cyprus Museum, brimming with archaeological treasures, and Shacolas Tower, a popular Cyprus sightseeing port of call for its sweeping views of the north.

One of the best things to do in Cyprus is to follow the wine trail. The Troödos foothills are cloaked in vineyards that produce the endemic commandaria grape, with tastings and tours available in traditional wineries and wine villages. Hire a car and start your route at Amasgos winery, outside Monágri, then call at Pitsilia village, between Trimíklini and Peléndri. Next drive to Ómodos, built around a 200-year-old monastery; the Linos winery is the best of three in the area. Finally, head downhill to Anógyra, a wine village that also produces other Cypriot staples – olives and carob pods. Be sure to visit Oleastro, an organic olive-oil mill and museum.

We’ve got a full list of things to do in Cyprus, you can find it here. If this colourful country is ticking all your boxes, then it might be time to check out our villas in Cyprus…  we recently added Northern Cyprus to our portfolio, too! Or if you fancy reading a little bit more on this captivating country, have a look at our other blog posts below…

Top 10 things to do in Cyprus

The local’s guide to authentic Cyprus