Mykonos may be a glamorous party island, but beyond this dazzling façade is a quieter side. Spend days wandering through whitewashed towns draped in bougainvillea, or scoping out hidden bays where the water is unfathomably blue. This Cycladic slab of rock also has a few secrets up its sleeve: avant-garde art galleries, icy-white monasteries, picturesque windmills, and one of the greatest mythological islands is a short boat trip away. After the sun goes down, the scene heats up as a young crowd gathers at beach clubs and the rich and famous flock to Mykonos Town’s glitzy bars. Here’s our guide to the best things to see and places to visit in Mykonos.

Visit during shoulder season (April to early June or late September and October) for warm days without the vast crowds and sky-high hotel prices.

How to Get to Mykonos 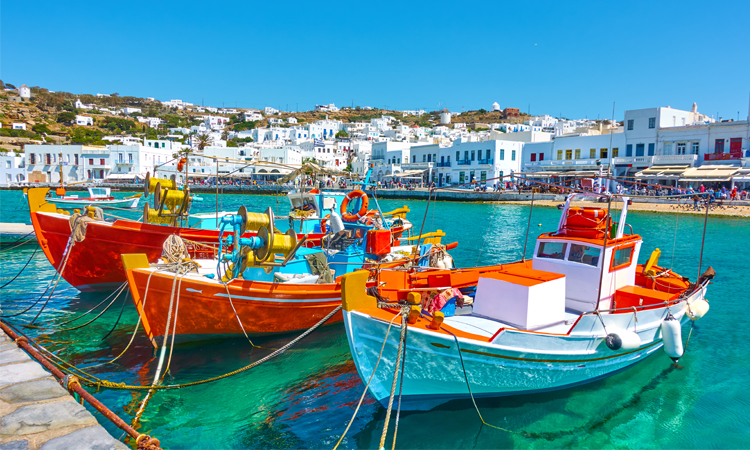 There are several options for how to get to Mykonos. A few airlines fly direct between UK airports and Mykonos, including easyJet and British Airways. Frequent ferries also connect Mykonos with Athens, Tinos and Andros throughout the year, while high-speed catamarans run between Mykonos and several other Cycladic islands, including Santorini and Paros, in high season. Domestic flights also run between Mykonos and Athens, Thessaloniki and various European airports. 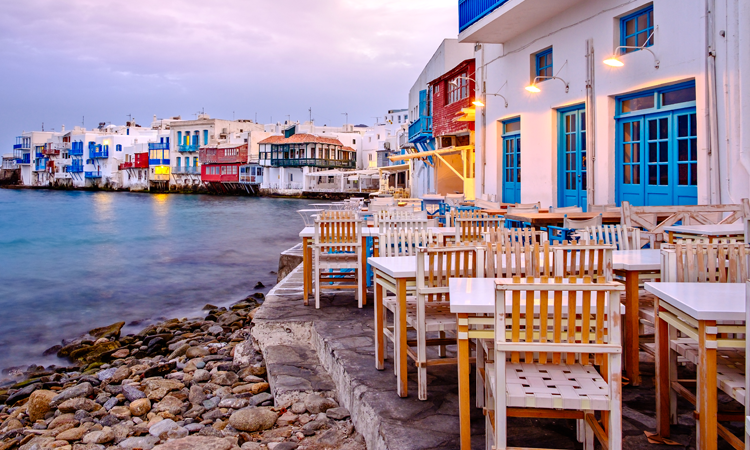 From big-hitter Mykonos Town, with its picturesque port and sugar-cube architecture, to quieter sibling Ano Mera, home to a smattering of historic sites – there are plenty of places to visit in Mykonos.

A thriving food scene features everything from traditional taverns to creative fusion dining. The standout is Kiki’s, a tiny, ramshackle tavern above Agios Sostis beach that, which is often cited as one of the best restaurants in Mykonos. Long-standing favourites like Niko’s Taverna and Pasta Fresca Barkia continue to stand the test of time, paving the way for emerging newcomers like Scorpios.

Mykonos is Greece’s answer to Ibiza. A-listers flock to the island’s stylish bars and swanky clubs, while all-day boat parties take the heady hedonism off shore. In summer, when the crowd swells and celebrity-spotting skyrockets, Mykonos Town is at the heart of the action, while Paradise Beach is a platform for local and international DJs.

From well-trodden Kalafatis to family-friendly Ornos, the best beaches in Mykonos are wide reaching and plentiful. There’s something for everyone: partygoers should hotfoot it to Paradise’s raucous beach clubs; snorkellers can glide among the cerulean waters of Agios Ioannis; and introverts can escape the crowds at Mirsini or Fokos. 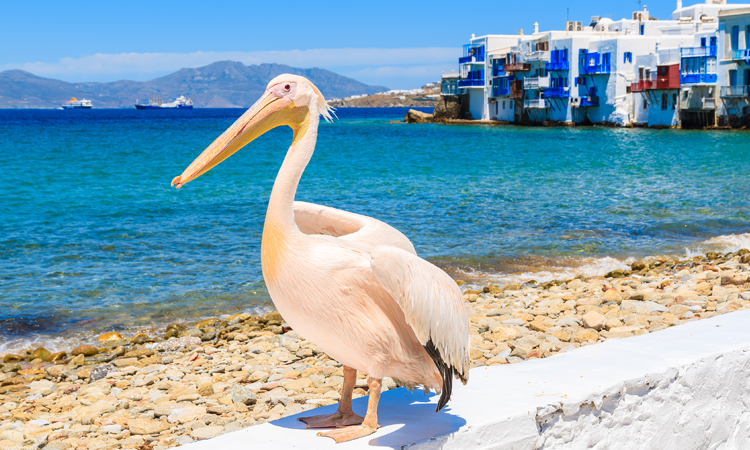 For a break from partying, watch a film under the stars at Mykonos Town’s outdoor cinema, hidden away in a peaceful square. Late-night screenings – 9pm or 11pm – run throughout the summer; arrive early for dinner at the terrace restaurant in a cactus-lined garden.

Mykonos’ three most treasured residents are of the feathered variety: pelicans. The original was found, wounded, by a fisherman in 1958, who nursed him back to health. The bird, named “Petros” by locals, stayed on the island until his death in 1984. Jackie Onassis, who loved Mykonos, then donated “Irene”, since joined by two others. Look out for the trio hovering for scraps by the Old Port fish market, or at the Windmills of Kato Mili – a favoured spot for an evening constitutional.

Traditional weaving is a dying trade on Mykonos since the advent of technology, but a handful of weavers still use looms. Head to Nikoleta, a small shop and workshop in Little Venice, named after the mamá of the mother-and-daughter team who can be seen making scarves and shawls by loom.

One of our favourite places to visit in Mykonos is the Dio Horia contemporary art gallery, and if you hotfoot it to the rooftop bar after browsing the works, you can often talk to the current artist-in-residence over a drink.

Things to Do in Mykonos 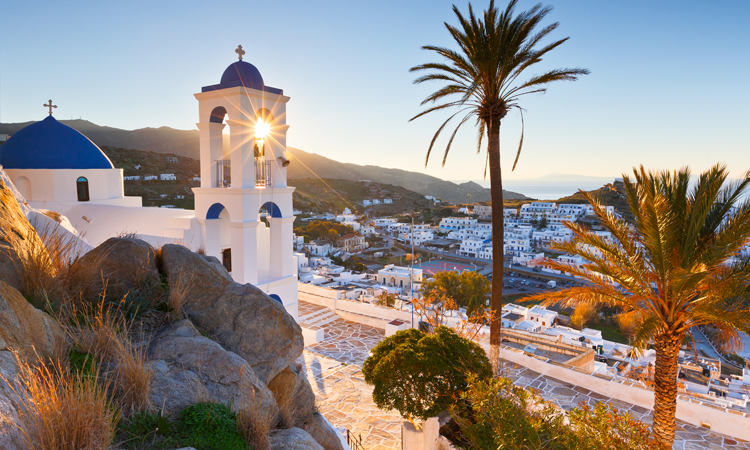 Unearth the Many Layers to Mykonos’ Capital

Mykonos Town, AKA Chora, is the poster child for charming Cycladic towns. A labyrinthine core of cobblestoned pavements is lined with chalk-white buildings, punctuated with blue shuttered windows and doors. Not just an exclusive enclave of bars and clubs, the capital’s Old Port is lined with waterfront cafés, where locals linger over espresso freddo, and Little Venice is home to the prettiest houses, with colourful balconies and hanging baskets. Art galleries and museums jostle for attention alongside clothing and jewellery boutiques – clustered mainly around Matoyianni Street (one of our top places to visit in Mykonos for shopping).

The quieter and smaller sibling of Chora, the charming town of Ano Mera is a 30-minute drive inland. Swing by Paleokastro Monastery and the ruins of 13th-century Venetian castle, Gyzi, both of which are among the best places in Mykonos for glorious views. Save time to linger in the 16th-century Panagia Tourliani Monastery, whose noteworthy features include an altar screen painted by Florentine artists and a well-preserved bell tower.

Mykonos is Greece’s answer to Ibiza. Join the island’s denizens after dark, when locals and visitors come out to play. From cabaret to cocktails, the island does nightlife in style; some of the best bars in Mykonos are the Queen of Mykonos, Jackie O’s, Lola and, not one for the fainthearted, Skandinavian Bar. For stylish Mykonos beach clubs, try Scorpios, a hip hangout on Paraga Beach; Paradise, with its increasingly raucous crowd; Cavo Paradiso, a huge clifftop club that attracts international DJ talent.

Take a Trip to Delos

Away from the party scene, history and culture abounds on nearby Delos, an island steeped in Greek mythology. Believed to be the birthplace of twin gods Apollo and Artemis, this tiny speck was inhabited as far back as 3000BC. One of the best day trips from Mykonos, the 5,000-year-old archaeological site is scattered with the remains of temples, amphitheatres, houses and public squares, many adorned with statues. Look out for a sculpture that is half a phallus – the remnants of the symbol of wine god Dionysus.

Like the look of that? Check out our luxury villas in Mykonos for an idyllic island break! If you need a helping hand with your booking, don’t hesitate to contact our friendly concierge team!

Things to do in Mykonos