With glorious lagoons, hidden caves and pine-clad mountains, a holiday in Fethiye promises enough heavenly scenery to last a lifetime. Located on the southwest coast of Turkey within the Muğla Province, the district is a sublime mix of old and new. Sleek, Mediterranean style villas rub shoulders with ancient historical sites while dramatic mountain ranges overlook glorious beaches of the Lycian Coast. Pleasing everyone from history buffs to island hoppers, all sorts of adventures await in Fethiye.

Fethiye is a destination that holiday makers typically visit in Spring, Summer and Autumn. Temperatures generally stay below 15 degrees between November and January, however the region receives around 300 days of sunshine each year, so you can rely on great weather during the warmest months. The summer is the liveliest time to visit when average daily temperature can reach 28 degrees. For a more peaceful – and less sweltering – experience consider visiting in May, June, September or October when attractions are quieter and daytime averages stay below 25 degrees. 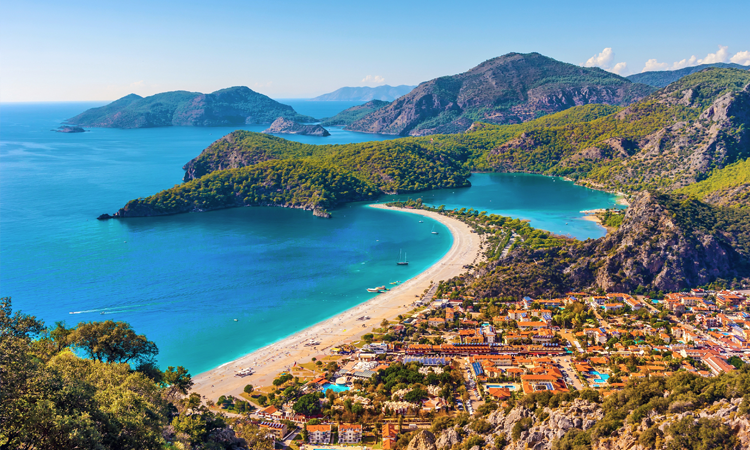 Airlines such as easyjet, Jet2, Pegasus Airlines, British Airways, Thomas Cook Airlines and Monarch all fly direct from the UK to Dalaman International Airport, which is less than an hour’s drive to Fethiye, via the Göcek Tunnel (you will need to pay a 7 Turkish Lira toll). The flight time is 3 to 4 hours. There are no rail links from the airport, so arrange car hire or private transfer, or pick up an airport taxi on arrival. You can get around Fethiye via taxi or via the main bus (Dolmus) which connects many key resorts. 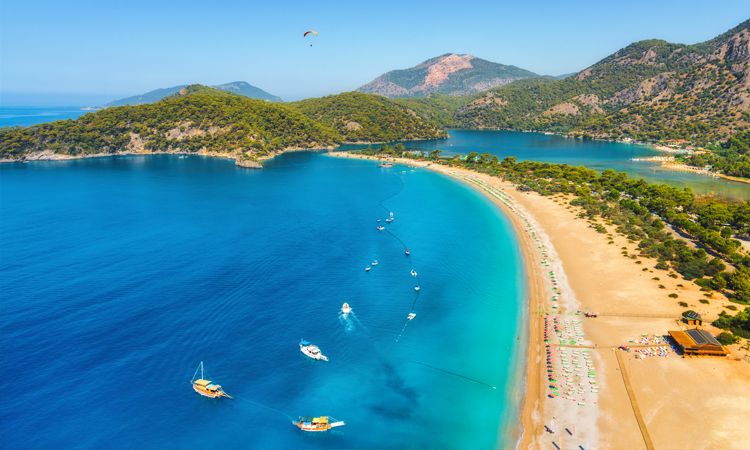 From the local’s favourite of Katranci Bay to the dreamy Blue Lagoon, Fethiye uncovers some fabulous sandy and shingle beaches. The Lycian Coast offers myriad boat trips that take you to secluded bays where it’s just you and the sparkling Aegean water.

Blessed by a gentle breeze, the Aegean coast offers a whole host of watersports. Fethiye port is a key stopping point for cruises and boat trips. This natural marina is also a favourite stop among yacht enthusiasts.

With a layered Roman and Byzantine history, you’ll find remnants of history across Fethiye and the Muğla province. Don’t miss the mysterious Lycian tombs that are carved into rockfaces across the region. Find out more in our blog, best things to do in Fethiye. 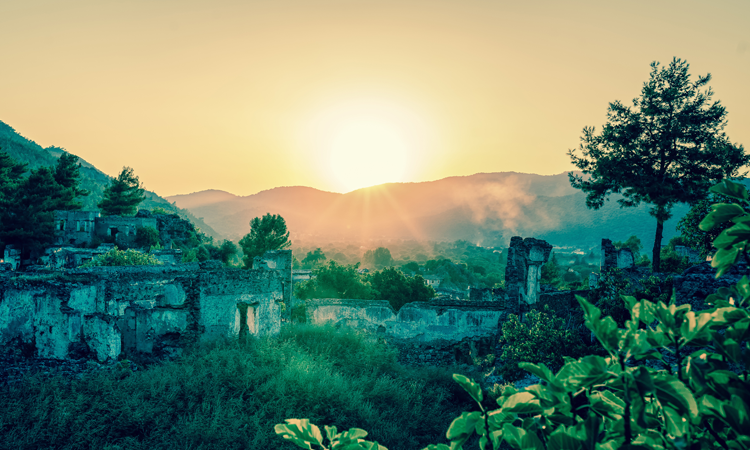 St Nicholas Island, or Gemiler Adasi as it’s known in Turkey, is a historical spot that’s visited for its intriguing hilltop tombs and churches. One of the tombs is said to be the final resting place of St Nicholas and there’s a church here dedicated to him. Equally intriguing, equally beautiful, it’s well worth hopping on a boat trip here.

Şövalye island is an idyllic spot which featured briefly in the James Bond movie Skyfall. Arriving only by boat (from Calis Beach), there are no cars here, so walk around and explore, relax on the beach and enjoy lunch at the glorious Ada restaurant, surrounded by panoramic views and the sound of cicadas.

Known in Ancient Greek as Karmylassos – and formerly known as Levissi – Kayaköy is a village once inhabited by Anatolian Muslims and Greek Orthodox Christians and it was suddenly emptied following the early 20th Century Greco-Turkish War. Today, this ‘skeleton’ of a village maintains an mysterious atmosphere and it’s a fascinating place to explore. 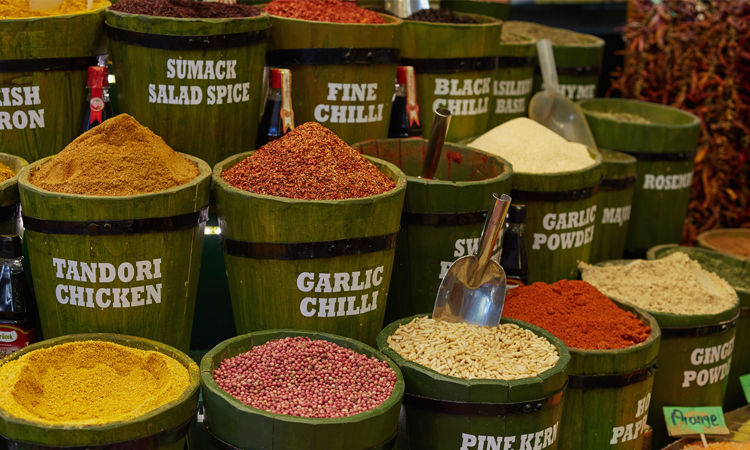 Overlooking the town, the 4th Century Tomb of Amyntas is one of the most famous landmarks in Fethiye which you can reach via a set of steep steps. An hour south of Fethiye is the ancient Lycian city of Letoon where the three temples dedicated to the gods of Leto, Apollo and Artemis lie.

The natural harbour in Fethiye town is a lovely place to stroll, admire the yachts and enjoy a traditional Turkish coffee in one of its waterfront cafes. Watch out for the turtles which occasionally hang out here.

From lace and leather goods to spices and herbs, a trip to the local bazaar is a must when you’re on holiday in Fethiye. Locals come to Fethiye market to pick up their fresh aubergines, olive oils and local cheeses and it’s a riot of colour and activity. Fethiye Fish market is a great place to try fresh seafood.

Nicknamed the ‘Pearl of the Mediterranean,’ these unique islands are a must-see in Fethiye. Take a trip on a traditional wooden gulet and you’ll discover some of the best Fethiye beaches and spot local flora and fauna, including the ‘Caretta Caretta’ sea turtle.

Now you’ve seen what Fethiye has to offer, check out our villas in Fethiye or contact our concierge team for a helping hand.