Whether you’re feeling worse for wear, need a pick-me-up, or looking for a change of scenery, there’s nothing better than a good ol’ fashioned coastal holiday. Crisp fresh air, Blue Flag Beaches, rugged paths and some of Britain’s finest scenery – what’s there not to love.

So, have a read below and uncover the best coastal holidays in the UK! 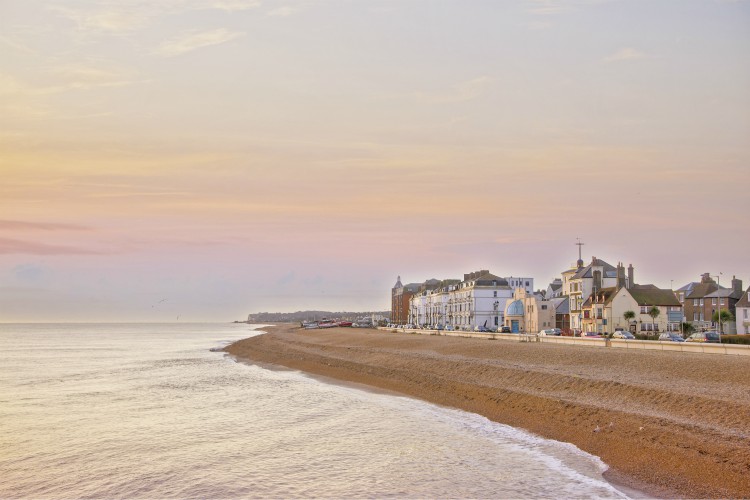 Just a mere 30 minutes from London, Kent is the coastal holiday that you’d probably never even consider. But hear me out. Kent is home to 350-miles of exquisite shoreline, all of which is flourishing with sandy and shingle beaches, pea-green grassland and unmissable oast houses. And with that in mind, you’d be bonkers to not re-consider.

Granted, Margate is well and truly a hipster-magnet, but Kent’s far from a one-stop-shop. Folkestone, Deal, Whitstable, Swale and Dover are the heart of Kent’s coastal offerings. Not only are the towns thriving with a history as rich as buttercream, but they also hold a culinary prowess that is a big winner with budding foodies.

Where to stay: Beach Retreat

Your coastal holiday begins in Sussex, but the middle and end will include a mix of bohemian art, the UK’s highest chalk sea cliff, marshland and more. Although Sussex’s real appeal is that the coast remains virtually untouched. Something that proves popular with British holidaymakers.

For a touch of coastal history, hit up Arundel where you can explore the gothic architecture on foot, or set sail on a river cruise which will ensure you get up close and personal. Of course, we can’t talk about Sussex without mentioning Brighton and Hove!! There, you can eat perfectly cooked fish and chips on the beautifully lined pebble beach, play arcade games by the pier and finish off with an ice cream from Boho Gelato.

Don’t miss: Beachy Head, follow the 1066 coastal trail & sit on the longest bench in the UK.

Where to stay: Brighton Pavilion Townhouse 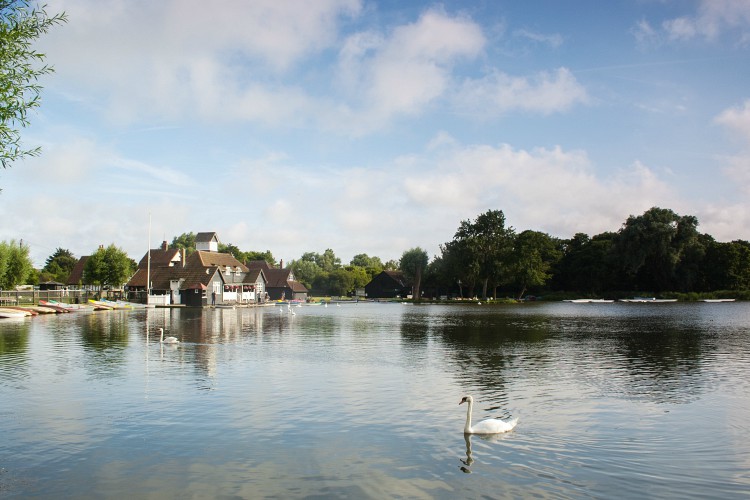 There are few better places to admire the Suffolk coast than Orford, a town famed for its bounty of smoked fish, pretty cottages, castles and its picturesque quay. But you see, the real beauty of a coastal holiday to Suffolk is the variation.

For something more refined, visit Ipswich, Suffolk’s county town. Busier than Orford, but it’s still a place where life revolves around water and maritime history. And for something magical? Visit Thorpeness, the tiniest of villages which so happens to be dominated by the Meare. The Meare is an artificial boating lake with Peter Pan islands and rainbow boats. Open from spring to summer, it’s a must.

Where to stay: Glen House 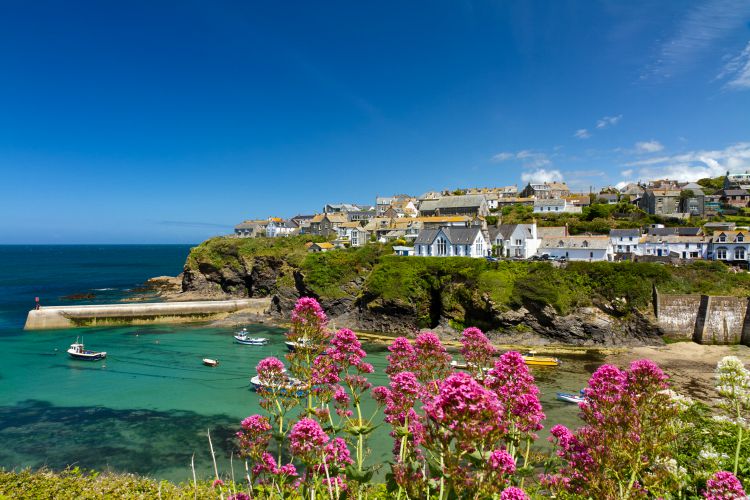 Ah, Cornwall. Now I tend to not have favourites, but I would be lying if I said this coastal oasis didn’t sway my favour. Cornwall is split between the south and north coast. Both polar opposites. In the south, the sea is framed by whitewashed fishing villages, sub-tropical gardens (hello, Eden Project!), river estuaries, market towns and fantastic sailing waters.

Then we have the north coast, which stretches for over forty breathtaking miles. The wild landscapes are a hub for thrill-seekers and the bays are surfing mecca. The coastline has a sprinkling of magic that combines old and new with natural scenery.

Don’t miss: The castles of Pendennis and St Mawes, cliff-top walks on the south coast, Port Isaac & the Camel Trail.

Where to stay: Sandcrest Cottage 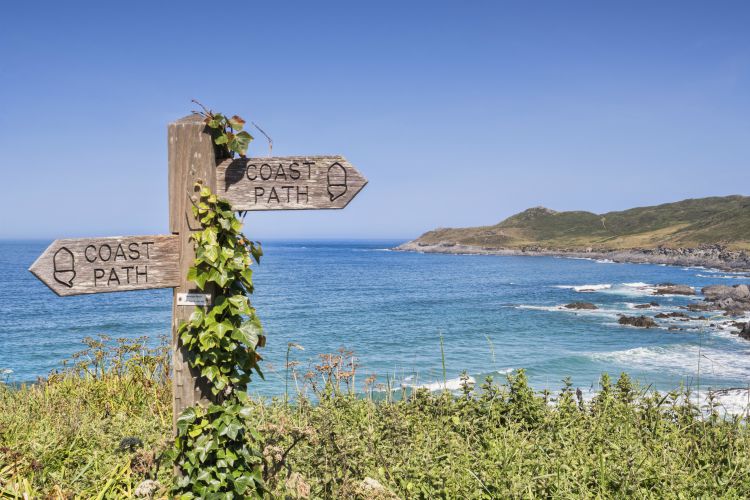 If you’re looking for a coastal break that has a winning combination of beaches, characterful pubs, boat trips and doses of quirky villages, then Devon is the destination for you. The real question is where will you perch up, the northern shoreline or the southern? Let’s break it down.

The northern shoreline is peppered with tall opulent cliffs, expanses of fine sand and is home to the first Unesco’s UK Biosphere Reserve. Whereas the south is more indented, which allows for some of Britain’s best walks, but it’s also far more developed and has more towns inland and on the coast. Areas of interest might include Dorset, Exmouth, the Jurassic Coast, Torbay, Ilfracombe and Dartmouth.

Where to stay: Beach Bay Cottage 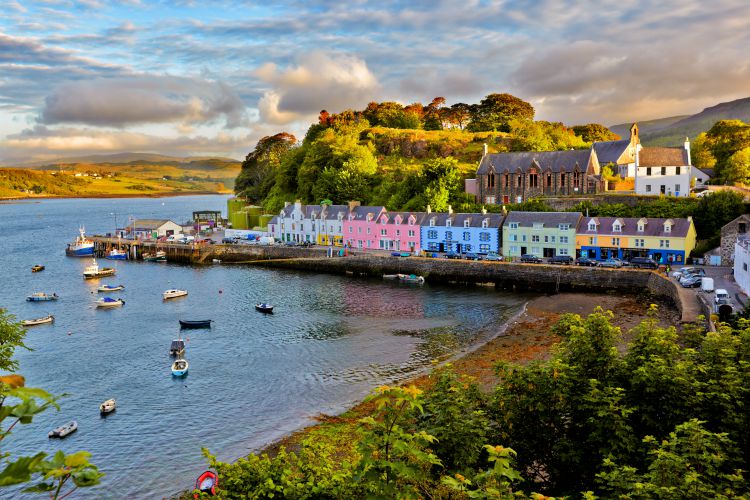 View on Portree before sunset, Isle of Skye, Scotland

Mainland Scotland is overflowing with 6,160 miles of coastline – pretty hefty eh? The east coast has long sandy beaches, firths and subsided sea levels. For example, Aberdeen, Portree and the Firth of Forth make cracking coastal destinations, especially for all ages. They’re not overly crowded, yet there’s enough to keep everyone in your party happy.

What you may have not already known is that the shoreline is filled will incredible wildlife. Dolphins, otters and other animals can be seen in just one day! Combining this with all the above, and it’s no surprise that Scotland’s coastal offerings made it on our list.

Don’t miss: Loch Lomond, visit Castle Stalker – Scotland’s most dramatic castle, walk along the beach in Durness & get up close to the Hoy Shoreline.

Where to stay: Cameron North Lodge 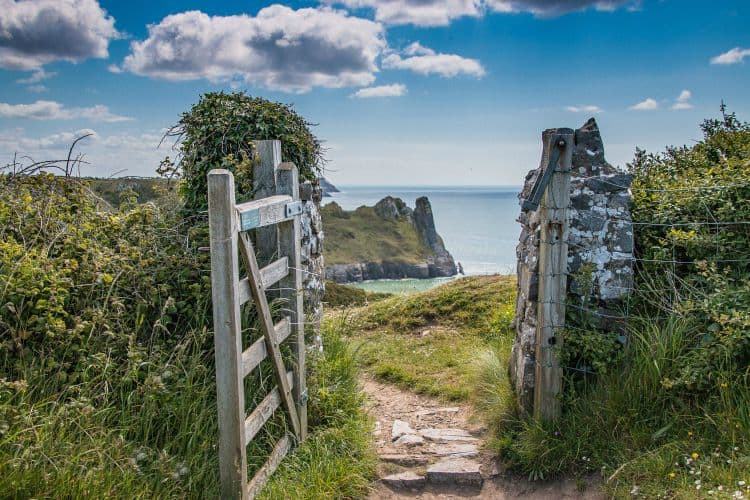 The Welsh coastline is resoundingly one to be proud of. Once there, you’ll find a whole array of exquisite beaches, such as Tenby and Barafundle, which are regularly voted among Britains best. There’s also no denying that it’s great for families, with many flocking to Wales for a taste of its wild outlandish nature; and then there are the swimmers and rockpoolers that make their annual trips for the surf scene.

Though Wale’s shining beacon is the Wales Coast Path, the worlds first uninterrupted route along the national coast. The path is a stage to show off the plethora of beaches, woodlands, castles and more. The path is 870 miles long, so you definitely wouldn’t walk it all at once, but a weekend trip is just enough to discover a new favourite bit.

Don’t miss: Admire the 30+ lighthouses along the Welsh coast, Tenby North Beach, looking out to the Great Tor & go rockpooling!

Where to stay: Gwynedd House 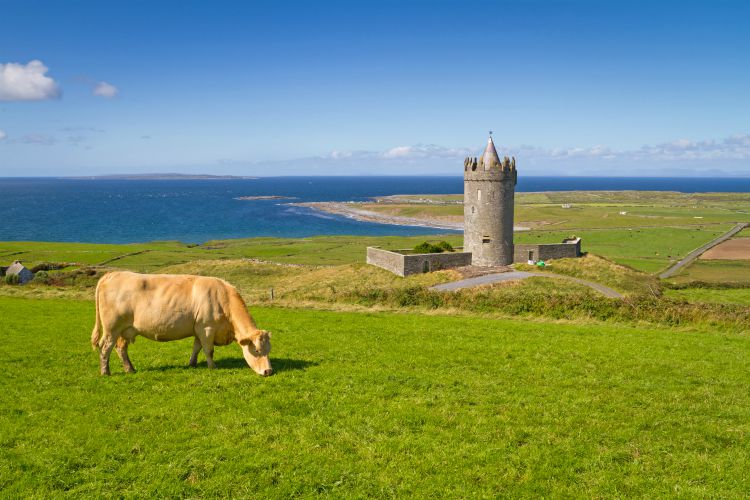 Sure, it’s not classed as the UK, but you only need to hop on a quick plane ride before you’re in the heart of the Emerald Isle, soaking up all that Irish charm. Ireland needs no introduction really, its greenery and magnified scenery exceeds itself. But have you ever ventured out far enough to uncover the hidden destinations dotted on the coastline? Before we get into the juicy bits, you’ve been warned – you’ll need wellies and an anorak to match. The Irish weather is as unpredictable as it can be beautiful.

Granted, Ireland is a little too big to talk about, so I’m going to focus on my forever favourite place, Galway. Galway city is the coastal Irish getaway that has all the excitement of a small city. Home to pubs that put England’s to shame, glorious walks along Salthill and a scenery that will knock you off your socks. You could so easily spend a week or two, driving up and down the Irish coast soaking it up for all its glory.

Where to stay: Woodland Retreat

The England Coast Path will be finished in 2020, making up 2,795 miles of coastal paths – connecting up every section of England. Find out about each of the walks and where to stay here.

How many have you been to? Sound off in the comments below & let us know your thoughts. If you’re keen to get a second helping, get in touch with our concierge team, they’ll sort your coastal holidays out in a jiffy!