This post has been written by SUITCASE Magazine, the leading travel publication that circumnavigates underwhelming tourist clichés to embrace the adventurous appetite of this generation and the next.

The Caribbean has long been a popular beach destination. Beyond stretches of pristine sand and long shadows of super yachts lies a rich medley of culture that varies from island to island. Delve into the region’s history and local traditions to discover the diverse cuisines and dynamic, music-filled nightlife of these Caribbean islands.

Eat, drink and dance your way through the 10 best Caribbean islands

This French corner of the Caribbean is known for its food, offering an eclectic mix of cuisines. Traditional dishes use the best of the island’s ingredients, combined with influences from Africa, France and South Asia. Dine on grilled sea bream (dorade grilée), stewed octopus (chatrou) and sea snail (lambis), flavoured with the island’s signature spice blend, colombo – a heady mix of turmeric, mustard seeds, pepper, West Indian bay leaf and coriander. Wash it down with a cup of Ti Punch, a Martinican drink made with cane juice rum, sugar cane syrup and lime.

Famous for its street food, Trinidad’s culinary reputation exceeds many of its island neighbours. Start your day with “doubles”, a type of fried flatbread called baras stuffed with curried chickpeas, tamarind sauce and chutney. Wander around the island exploring Creole culture and Trinidadian spoils, but it won’t be long before the smell of more food draws you back to street vendors. Try one of Trinidad’s traditional curries with paratha roti or snack on pholourie – fried dough filled with spices. Stuffed as full as your morning doubles, waddle into one of the island’s bars to spend evenings sipping on rum-based cocktails and dancing to Soca music, the island’s own blend of calypso and Indo-Caribbean music, typically featuring toe-tapping percussion and soulful brass instruments.

If secluded island life is what you’re searching for, Bonaire is the place to go. One of the smallest islands, delve into southern Caribbean lifestyle where drum-based music echoes down cobbled streets and underground bars are the place to be come sundown. The cuisine offers a balance of fresh seafood dishes and local spiced curries – stop by snèks, Bonaire’s street food stands to try pastechies for deep-fried pastries packed with your choice of meat, or piska kriyoyo, grilled fish done the Creole way.

Music has always been a big part of everyday life in Barbados. Walking through the colourful streets of this Caribbean island favoured by super-yachts and celebrities, you’ll catch notes of anything from the rhythmic beats of calypso music and sombre sound of brass instruments playing Caribbean jazz to the catchy tunes of Bajan folk melodies. Stop by a street stall for flying fish and coucou – the traditional Bajan dish consisting of fried fish with a side of deep-fried cornmeal.

This French island combines Gallic influences with Creole staples. Stop by food stalls to buy a bag of accra, a classic Caribbean dish of small fried fritters filled with moreish spiced fish, or bokit – flatbread sandwiches loaded with meat, melted cheese and a vinegar sauce. Suitably satisfied, head to any of the island’s carnival-esque bars to while away hours dancing to zouk, Guadeloupe’s upbeat music originating in the 1980s. In need of more sugar to keep you going? Snack on fresh fruit sorbet sold at food stalls across the island.

Split into two parts, this island has endless culinary spoils on offer. Head to St Martin, the French side of the island, for “lolos” (open kitchens) serving barbequed ribs and chicken served with fried plantain, while you’ll also find plenty of fresh Creole-style seafood here. Alternatively, the capital of Sint Maarten, Philipsburg, is where you’ll find Dutch cheese paired with jerk-style chicken and gin from the Netherlands. Despite the different cultures, both nations share a love of festival-style music. Booming calypso, merengue, soca, zouk and reggae beckon travellers into bars and restaurants across the island.

This archipelago of islands plays music from dawn till dusk. Bar hop around wherever you’re staying to see live ripsaw – the rake-and-scrape sound favoured by locals – as you sip on rum cocktails and sup on a wide selection of seafood. Seasonal dishes such as spiny lobster are a must-try, while dishes featuring conch are favoured year-round – try the conch ceviche for a zingy mix of meat, onion, tomato and lime.

While music is just as prominent in St Lucia as it is in its neighbouring islands, the focus here is less on words and more on dancing. Music provides the basis for hours of sashaying and shimmying, with polka and quadrille (“kwadril” in Creole) two favourites. Keep an eye out for St Lucian folk instruments such as the banjo and the cuatro, an instrument akin to a small guitar. Fuel your foot-stamping by feasting on langouste (spiny lobster), bouyon (meat and red-bean soup) and the local favourite of saltfish with green figs.

Originally the base for sugar plantations and rum distilleries, Antigua’s food culture comes from solid stock. Begin days with a generous helping of black pineapple, the island’s official fruit which is much sweeter than that you’ll find in supermarkets. For lunch or dinner, be sure to try saltfish and fungi, an Antiguan dish similar to polenta or grits. Spend evenings sipping on Wadadli Beer, the only Antiguan brand on the island, and popping into crowded live music venues where stars of Caribbean sub-genres often perform until the early hours.

Known as “Spice Island”, Grenada grows everything from nutmeg, cinnamon and ginger to turmeric and thyme, resulting in local plates that really pack a punch. Those with a sweet tooth should try nutmeg ice cream for a refreshing snack or Granadian fudge, a sugary treat made with a blend of ginger, nutmeg and coconut. Those leaning towards savoury dishes should wander around St George’s. Nab a table at a restaurant and order “oil down”, the national dish made from salted meat, dumplings and local vegetables.

Reggae, ska, rocksteady, dub, mento, dancehall, calypso… Jamaica is home to an abundance of musical sub-genres. Music streams out of every window, so make like Marley and get jamming. Days spent dancing deserve hearty meals to build energy levels back up. Feast on heaped plates of jerk chicken, goat curry, and steamed fish, and wash it all down with a large glass of rum and Ting, a popular fizzy cocktail.

Boasting a medley of Hispanic, African and native Taínos influences, head to San Juan to delve into Puerto Rican cuisine. Snack on tostones (twice-fried slices of plantain), nibble on chicharrones de pollo (deep-fried chicken bites) or head to one of San Juan’s restaurants to order larger dishes. Empanadillas (meat-filled pastries) make for a delicious starter, followed by mains such as pastelón – a Puerto Rican version of lasagne made with layers of plantain and minced beef – or arroz con gandules, a traditional meal of fried rice and pork. 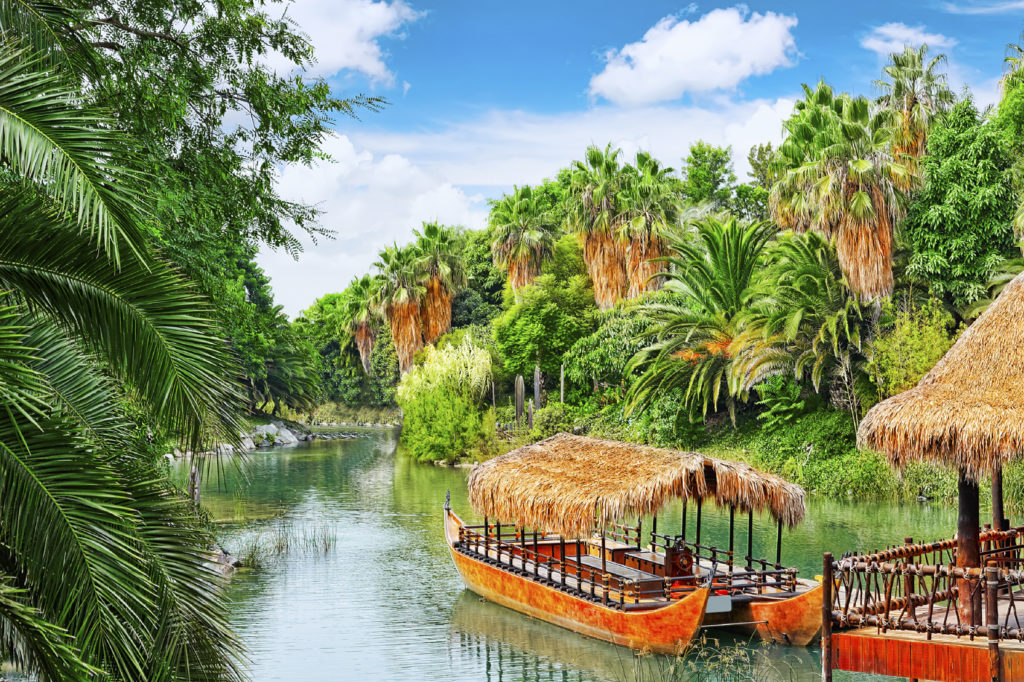 While the cuisine of the Dominican Republic closely resembles much of other Caribbean islands, the food here also takes inspiration from some Middle Eastern cooking. Try mangú, a type of plantain mash; sancocho, a meat stew made with pork, lamb and chicken; and quipe, a deep-fried bulgur roll similar to a Lebanese kibbe. Finish with pudin de pan, a spiced bread pudding.

One step ahead of a tour guide, SUITCASE Magazine aims to inspire people and help them to discover different destinations. In essence, we exist to change the way people travel. Through a quarterly print magazine, daily updated website, weekly newsletter and events, SUITCASE acts as a bridge between cultures around the world.

POSTS RELATED TO THE 10 BEST CARIBBEAN ISLANDS FOR THEIR FOOD & MUSIC SCENE:

The ultimate playlists for your Caribbean holiday

Where to stay in the Caribbean