The best beaches in Dorset range from the world-famous coves of the World Heritage Jurassic Coast, to quintessential seaside spots in Bournemouth and lesser-known bays accessed via peaceful villages. Whichever beach you choose in Dorset, chances are, it’ll be super-clean, flanked by jaw-dropping cliffs and boast glorious views over the English Channel. Here are some of our favourites for you to check out on your next Dorset villa holiday. 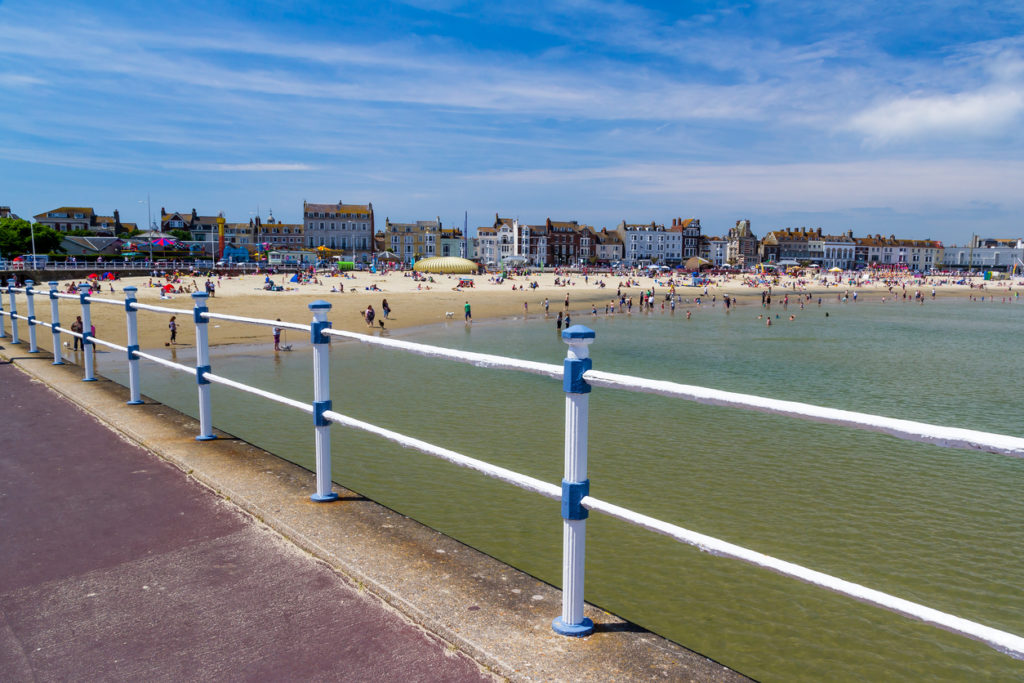 Holiday makers have been flocking to Weymouth Beach since the 18th Century and today, it ticks all the boxes for a family-friendly beach. Donkey rides, boat trips and Punch and Judy shows give it the traditional seaside touch and during the summer, lifeguards are always on duty which is good, because the water here is ideal for swimming and watersports.

You won’t run out of beach space, or things to do, in Bournemouth – this popular Dorset town has a whole seven miles of sand and there are all sorts of seafront events held throughout the year. The section known as Alum Chine, however, is perhaps one of its best spots. You can catch the Land Train there from Bournemouth Pier and this Blue-Flag beach has colourful beach huts and (on a clear day), beautiful views out to Old Harry Rocks and the Isle of Wight. 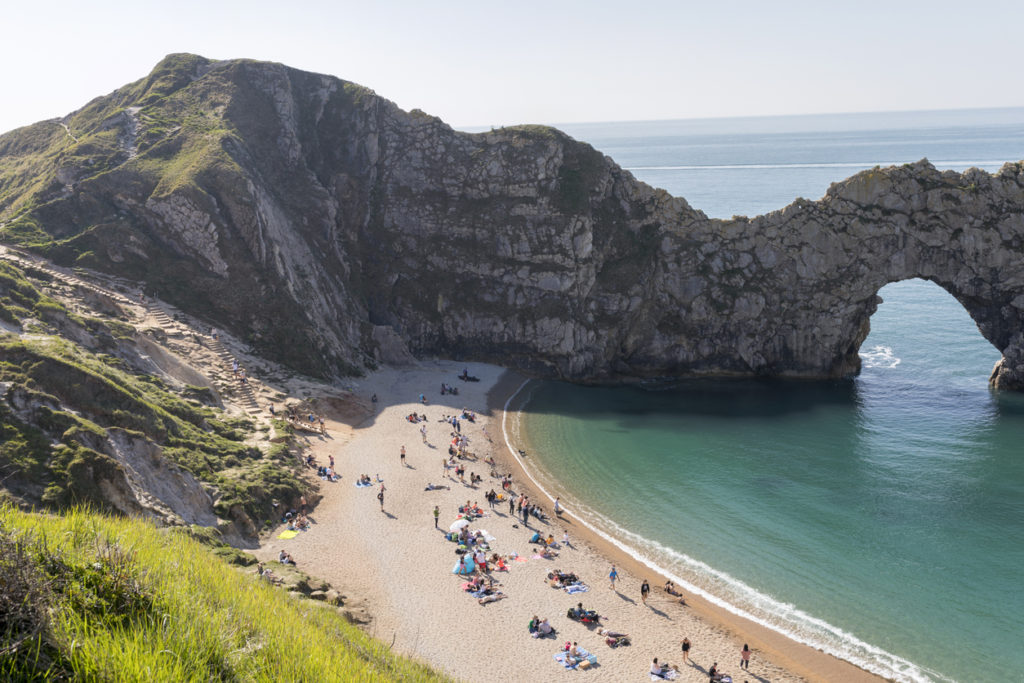 This pebble and shingle beach, quite simply, has to be seen to be believed, as it’s the home of the magnificent Durdle Door, one of the most famous rock formations in the world. Located on the Lulworth Estate, it’s accessed via a steep path from Lulworth Cove (not suitable for wheelchairs or pushchairs), or via the car park at Durdle Door Holiday Park. Marvel at the intriguing caves and tread carefully for a shallow bathe in the crystal-clear waters. Arrive early to avoid the crowds.

You’re really close to the famed Lulworth Cove and Durdle Door here, but fewer people make the effort to take the steep path into Man O’ War Beach, a part-sand-part-shingle bay backed by fantastic cliffs. The water at Man O’War Beach is super clear, hence the experienced divers and snorkellers who often head off from here to Durdle Door and Stair Hole.

Best for the wow-factor: Lulworth Cove 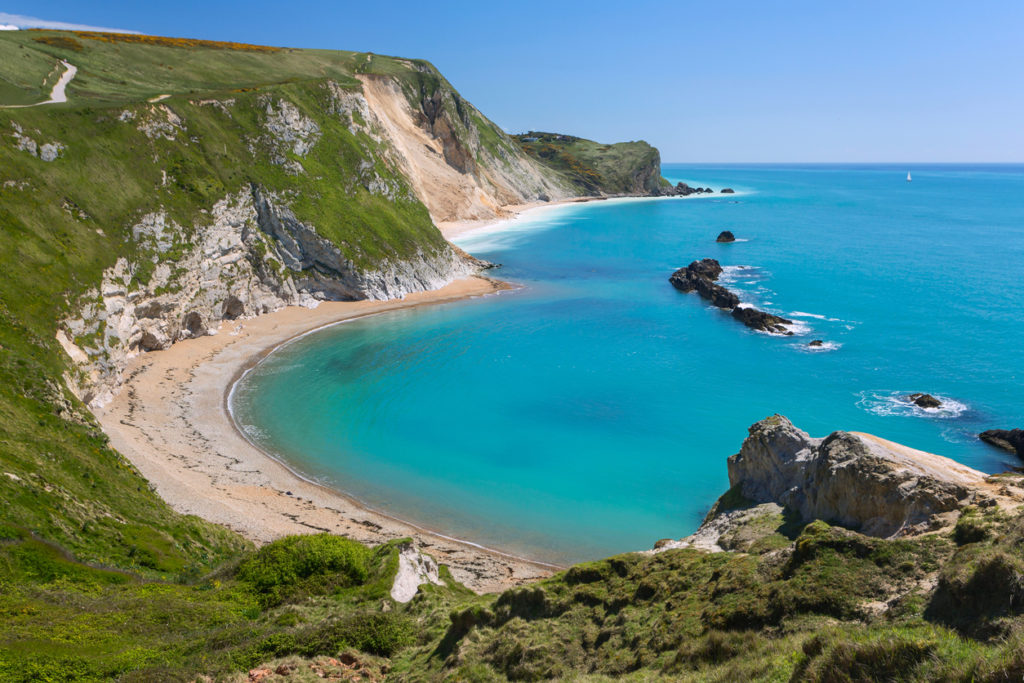 Geologists are in their element here, but so is anyone who appreciates staggering scenery, as these lagoon-like waters are framed by dramatic limestone cliffs which have been gradually eroded over millions of years. The on-site Heritage Centre offers an introduction to the Jurassic Coast geology and little ones will love exploring the rock pools which appear at low tide. Drop by The Boat Shed Café for fish and chips.

Sitting below the Grade II-listed Clavell Tower, Kimmeridge Bay is not only a Special Area of Conservation, it’s also a famous spot among avid surfers, with many claiming it’s the best surfing beach on the entire south coast. Water sports fans gather here in winter for the best waves while in summer, swimmers of all abilities can try out their snorkel trail. The rockpools are great for children too. 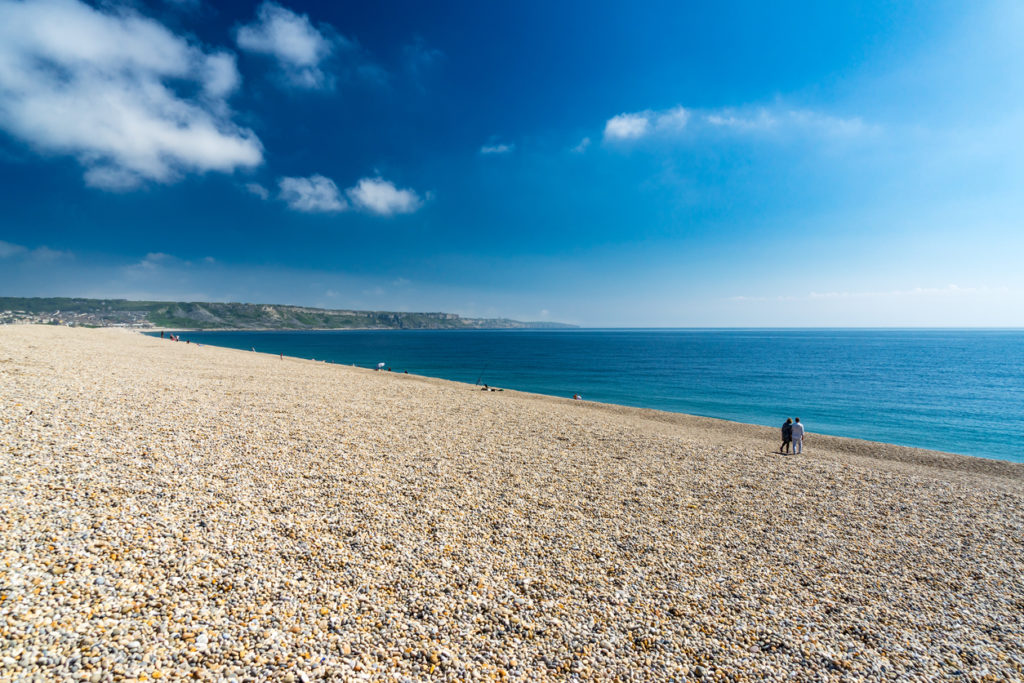 Chesil Beach lies in the heart of the UNESCO World Heritage Site of the Jurassic Coast and stretching for a staggering 18 miles between West Bay and Portland, it’s one of the most iconic beaches in Dorset. The scenery might look and sound familiar if you’ve ever watched Broadchurch or read the novel On Chesil Beach. Flanked by the 13km-long Fleet Lagoon, it’s home to interesting birdlife, such as the rare tern, and part of it neighbours the amazing Abbotsbury Swannery.

Charmouth Beach, located by the quaint village of Charmouth, has a relaxed, chilled-out vibe, but it’s also one of the top places in Dorset to go for fossil-hunting, with its Heritage Centre offering guided walks. Made up of pebble and sand, Charmouth Beach is divided into two sections by the mouth of the River Char: the east, which is favoured by families, and the more pebbled west, which has a gently shelving seabed and is great for swimming. National Geographic once named it among the best beaches in the world. 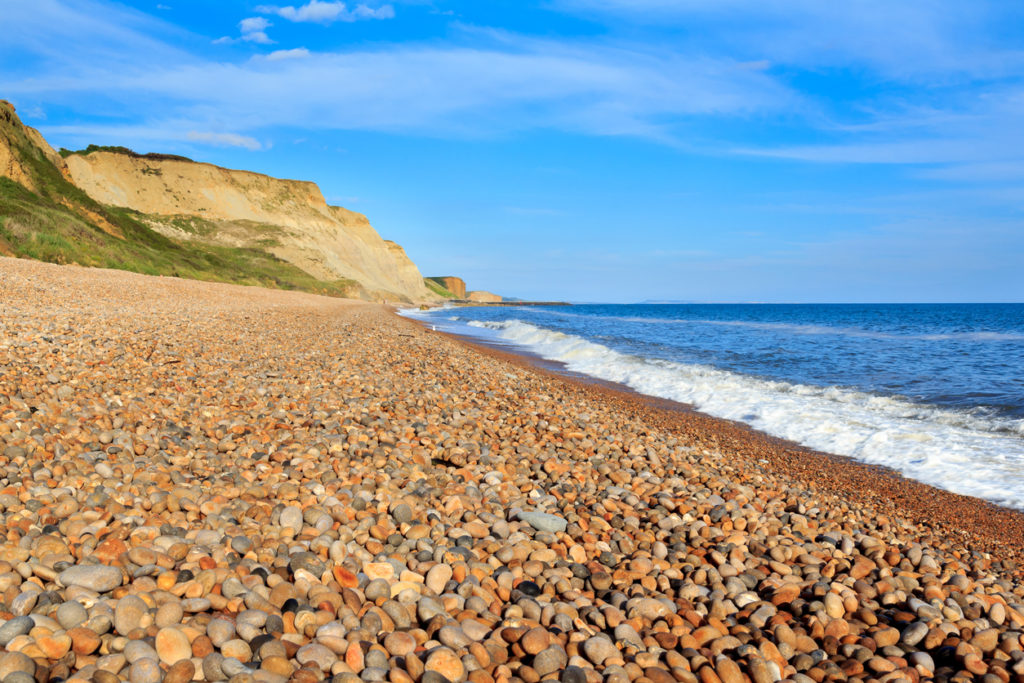 Once you’ve explored Dorset’s most iconic beaches, head to Eype Beach, a lesser-known spot that sits below the famed Golden Cap peak, a place that offers some of the best Jurassic Coast walks. Dorset doesn’t get much more beautiful than this small and secluded bay, accessed via the charming country lanes of Eype village. And while bathing should be saved for the strongest swimmers, it offers lovely sunsets, a perfect place for a picnic and blissful seclusion.