While most visitors are lured to Menorca for its coastline, Neolithic sites, and historic twin cities, the easternmost Balearic Island conceals hidden depths. Discover indigenous horses, artisanal traditions, arts festivals, and a rich underwater scene. Here are 12 of the best things to do in Menorca.

Delve into undiscovered corners of the island with a thrilling jeep safari. One of the best is Jeep Safari Menorca, which has exclusive access to areas closed to the general public. You can unearth archaeological remains, get up close to revered Menorquín horses, swim in turquoise calas (coves) and learn about local cheese-making traditions. Pick from three two-hour tours, depending on your interests.

One of the most exciting things to do in Menorca is paragliding. Try tandem paragliding with Planoram Paragliding to soar above Son Bou Rock and S’Enclusal, or launch from El Toro, the island’s highest peak at 1,122ft, with Parapente Biplaza Menorca. A truly unique perspective of the island.

Camí de Cavalls, or “Way of the Horses”, is an ancient bridleway that circles the entire coastline. The 185km-long path is dotted with old watchtowers and fortresses – which were used to defend the island in bygone eras. While you can walk or cycle the trail, horse riding is our favourite way to traverse the cliff-lined perimeter – horses are sure-footed in navigating steep paths and even the rockiest of Menorca beaches. You can complete the whole route in a week, or Rutas Ecuestres offers a two-day package; it specialises in black Menorquín horses – the island’s indigenous breed.

One of the most scenic things to do in Menorca to explore the coastline is a boat trip from Port de Mahón. You’ll glide along the 5km-long inlet to the point at which it meets the Mediterranean Sea, passing ice cream-coloured buildings and forested hills. Yellow Catamarans offers hour-long historical tours in a glass-bottomed boat, departing frequently from the Moll de Ponent.

Get your culture fix at Pedra Viva festival

Visit in July to make the most of the Pedra Viva festival, a month-long arts and culture event held in an abandoned limestone quarry: the spectacular Ses Pedreres de s’Hostal. Expect everything from music concerts and poetry readings to dance performances and theatre productions. Originally intended as a one-off event, it was a smash and is now an annual affair.

With crystalline waters and brightly coloured fish, Menorca is a snorkelling hotspot. Blue Islands Diving offers a three-hour boat trip and underwater tour from Cala Galdana, covering the shallows of the island’s finest beaches. Alternatively, take a shorter snorkelling tour (1.5hrs) in the pristine marine reserve to the north of the island, where you may see starfish or moray eels. If you’d rather go solo, grab your mask and head to Cala Pregonda, near Es Mercadal; you’ll have to hike half an hour to reach this remote beach, but it’s worth it – it’s one of our favourite things to do in Menorca.

Splash about at Menorca’s biggest waterpark

One of the top things to do with kids in Menorca is to visit Splash Sur, the biggest waterpark in Menorca. A fairly new addition to the island, the park sits on the southeast coast, near Punta Prima. It’s designed for all ages, from tipping buckets, water jets and a splash pool for younger kids, to hair-raising slides like the Black Hole and the Kamikaze for teens.

Hike to the top of Monte Toro

Ask any local what one of the best things to do in Menorca is, and they’ll say climb El Toro, the highest mountain on the island, at 354 metres above sea level. Taking up to two hours, this hike may pull on your hamstrings, but the panoramic vistas at the summit are jaw-dropping. You can seek shade in the 13th-Century church or refuel at the café, before tackling the (easier) downhill route.

This wild, untamed pocket of northeast Menorca sees dense forest give way to marshland and windswept dunes. Beautiful cliffs wrap around the nature reserve, plunging to the sea below. A handful of tiny islands complete the picture. The 50-plus square kilometres provide habitat for wildlife, including around 90 species of bird. Sign up for a guided tour with an experienced Menorca travel guide at the visitors’ centre.

Go back in time at the Torralba d’en Salord

To see one of the best-preserved Talayotic villages, head to Torralba d’en Salord. While the Talayotic era remains a mystery, it is thought to have spanned 1500 and 123BC, with its prehistoric monuments hinting at a sophisticated culture. A large taula – a T-shaped stone structure – is encircled by an enclosure believed to have been an open-air religious space. You can also check out excavated caves, pillared buildings, and huge boulder walls.

Ramp it up with some water-sports

The island is emerging as a water-sports destination, thanks to strong winds and clear waters. Head to Fornells, a northeastern village with some of the best beaches in Menorca, to try the likes of windsurfing, sailing and kite surfing. Alternatively, head southeast to Binibeca for the chance to dive among underwater shipwrecks.

Enjoy a sundowner at a cliff-side bar 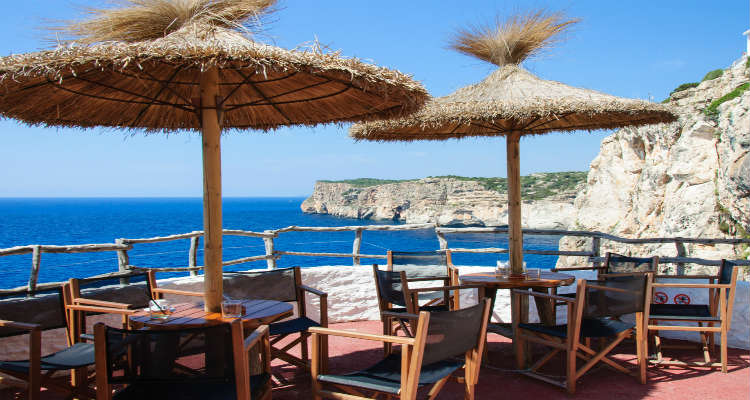 The most staggering spot to catch a sunset is Cova D’en Xoroi, a cliff-side bar carved into the rocks, in the seaside resort of Cala en Porter. Grab a seat on the outdoor terrace for views of the sun sinking below the Mediterranean. Be warned, though, the bar’s reputation precedes it, so it gets busy – try to book ahead.

Ready to buy that plane ticket to Menorca and get trying out this list of things to do? We don’t blame you. We’ve got a great selection of villas in Menorca, which have been handpicked by experts to get you either in the heart of the action or out in the blissful countryside.

10 of the best beaches in Menorca

Which Balearic Island is the one for you?