Madeira should be considered a holiday destination at any time of year. As a result of its mountainous landscape, Madeira has a microclimate, which allows guests to experience temperatures of 20 degrees Celsius in what we consider to be a winter season. During these colder months, it’s not uncommon to witness snowfall in the Pico do Areeiro Mountains, but still see the sun glistening against the yellow skins of the banana plantations along the coastline.

Madeira is a subtropical haven with some booming cities that allow for some fascinating events during our winter months, which is why we have pulled together a list of things to do in Madeira out of season. 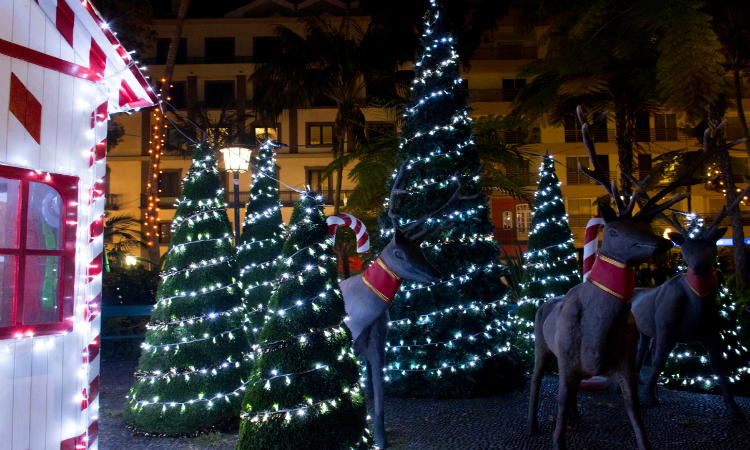 Madeirans really enjoy the Festive period, so if you’re fed up with defrosting your windscreen in the morning, maybe consider this island’s take on Christmas. The bigger cities and towns, like Funchal, will be illuminated in the month of December. In fact, Funchal could be considered the heartbeat of all the merriments! First stop should be the Funchal Municipal Garden, in order to observe flowers and plants you’d be lucky to see during the warmer months of most European cities. Gardeners here really embrace this season and tend to decorate their gardens.

A leisurely stroll to Avenida Arriaga or Mercadinho de Natal, amidst Christmas Carollers and street performances, will bring you to the familiar sight of a Christmas Market. This is where you can indulge in some local delicacies, as well as spoil your waistline! With several wines and liquors to sample, accompanied with Bolo do Caco (sweet potato flatbread served with garlic butter), Carne de Vinha-d’alhos (pork sandwiches) Honey Cake and even local fruits like passionfruit and bananas, you might need to take another trip around the Botanical Gardens to burn off the calories! At dusk, the night market or Noite do Mercado, in Funchal becomes the hub. Not only will you experience the buzz and excitement of the Christmas period, but you will also be able to continue stuffing your face with delicious food into the late hours!

If you’re travelling with little ones, then visiting Aldeia de Natal on numerous occasions will leave the kids beaming from ear-to-ear. Children will also be introduced to the story of the Nativity, amidst the nine ‘Novenas’ rituals that are held at churches and parishes throughout the island. Most of the ceremonies culminate at ‘Missa do Galo’, or Christmas Mass. The celebrations continue into the night and are often supplemented with traditional music, carollers and of course, more food!

A particular aspect that is truly impressive is the night sky. Due to Madeira’s isolation in the North Atlantic Ocean and its progressive environmental policies, the skyline is unpolluted, which allows stars to dazzlingly gleam… perhaps the little ones will be able to spot the Star of Bethlehem! 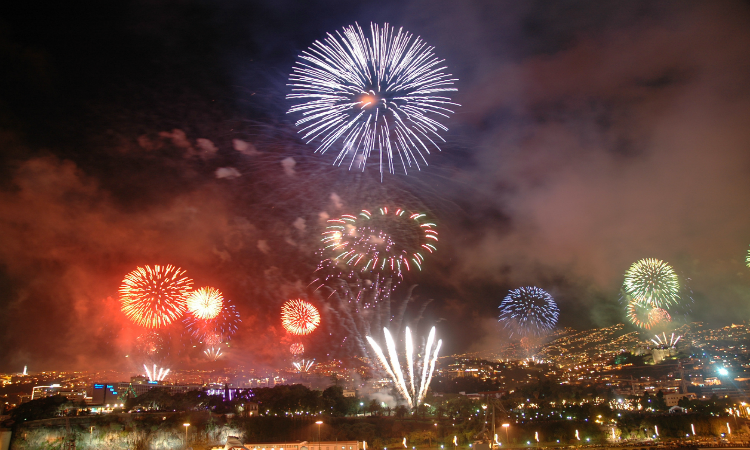 The Portuguese are renowned for their celebrations, so don’t be surprised to witness the Christmas spirit seamlessly transcend into New Year parties. Celebrations really jolt into life on the 30th and there is no better place to behold this sight than at Avenida Arriaga. This plaza is converted into the epicentre of live music, while some of the best restaurants lay only minutes away from this famous cobbled avenue.

One of the more grandiose things to do in Madeira that you’ll have the chance to experience at New Years is the Concert held annually at the Municipal Baltazar Dias Theatre. Take the occasion to dress-up for an evening of riveting musical splendour, provided by the Orquestra Clássica da Madeira.

Madeira’s New Year’s Eve is notorious for its fireworks show! This was once proclaimed as the ‘Greatest Fireworks Show in the World’ by the Guinness World Records, so you know it won’t disappoint. And what better way to bring in the New Year’s greetings and good wishes, than with an inordinate light display showcasing wonderful whizzing fireworks, in a variety of vibrant colours. A quick image search on your web browser may make you believe that that the images you are seeing are rendered, but this isn’t the case. It’s one of the most awe-inspiring things to do in Madeira, and a once-in-a-lifetime experience. 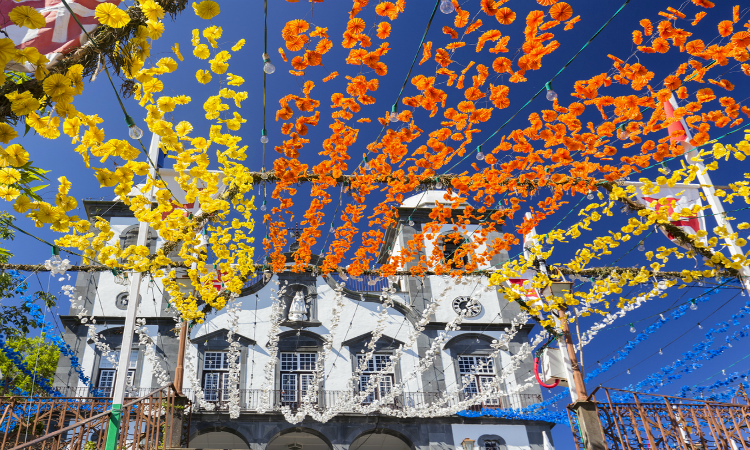 Everyone has heard of The Carnival of Brazil and its legendary street parties, but did you know that the Madeirans have their own Carnival? Yes, it is a shame that Brazil is over 5,000 miles from the UK, so you will be pleased to know that you can have a taste of a Portuguese street party right on your European doorstep. Like mainland Portugal, Carnival in Madeira is celebrated in mid to late February and is considered a seminal slot in every Portuguese calendar.

Although not quite performed on the same magnitude as the more renowned Brazilian affair, The Carnival of Madeira is an experience all its own. Join the masses, who are drawn to the streets throughout the south of the island in order to witness the pulsating float processions. This parade is always accompanied by choreographed troupes’ who seem to be spellbound by the carnival’s banging melodies! On Shrove Tuesday, Carnival merges into the ‘Trapalhão Parade’. This provides an exciting opportunity for foreigners and tourists to jump on the Carnival bandwagon and participate in the continued revelries… which, at this point, has just become an excuse for continuous partying. 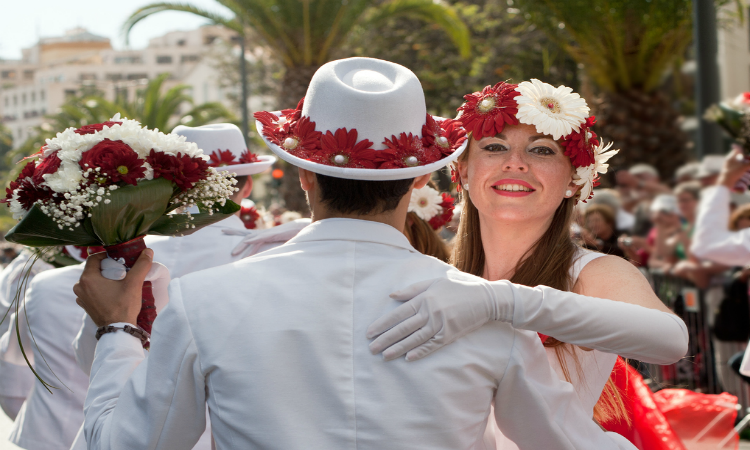 After a few months of some peace and quiet, an iconic anniversary is re-introduced to the fleeting Spring months of April and May. Renowned as the ‘Floating Garden in the Atlantic’, Madeira hosts its annual Flower Festival. This iconic holiday embraces the themes of fertility and reawakening. The island’s richness of flora is exhibited at the Avenida Arriaga, where multiple outstanding displays are accessible for guests to view. The highlight of the festival is the illustrious Flower Allegorical Parade. Again, custom designed floats pack the streets along with singers and dancers, who are all decorated in flowery themed costumes. The flow of the celebrations is directed toward the Wall of Hope, which signifies world peace. 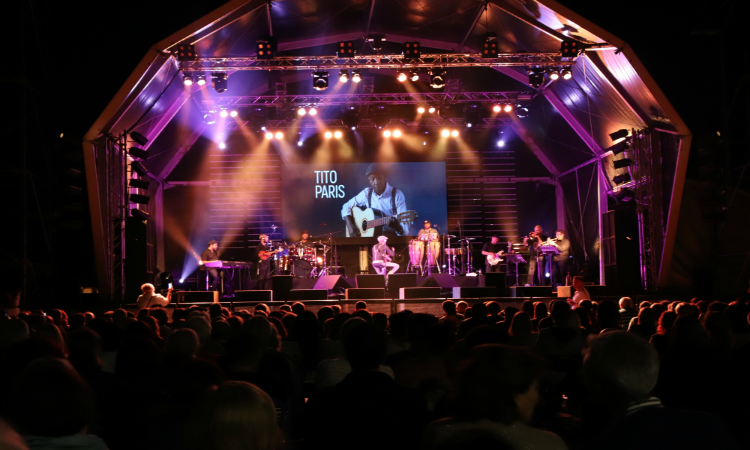 As we approach the busy summer season, Madeira has one last trick up its sleeve! The Atlantic Festival hosts a number of events over the month of June, with a particular emphasis on its Pyromusical shows, The Atlantic Roots Festival and The Regional Arts Week. During 2020, the Pyromusical competition will be held every weekend of the month, on the pier outside the Pontinha. During the concluding weekend of the month, you and your family will have the chance to back your favourite band, as the new winner is declared by public vote… the ideal recreational activity to the modern Brit!

The Atlantic Roots Festival is also an opportunity for lovers of music (more precisely for those with an ear for a diverse sound) to indulge in a three-day micro-festival. Since 1994, attendees have been graced with an eclectic variation of music; ranging from Soul and Funk to Classical. Most of the festival can be enjoyed on each Saturday of the month, so this gives you and your family lots of time to check out the rest of this marvellous island during the week. Another staple of Madeira’s Atlantic Festival is further firework displays, so don’t be too disheartened if you’ve missed the colossal New Year celebrations.

If you’re looking for a relatively quick flight from the UK (under four hours) and are craving some sun, yummy food, exciting culture and stunning scenery – we think we’ve found your next winter holiday. Plus, now you’re armed with plenty of things to do in Madeira if you fancy an out of season break; check out our collection of villas on this spectacular island… you won’t be disappointed.

POSTS RELATED TO THINGS TO DO IN MADEIRA OUT OF SEASON:

The best surf spots in Portugal