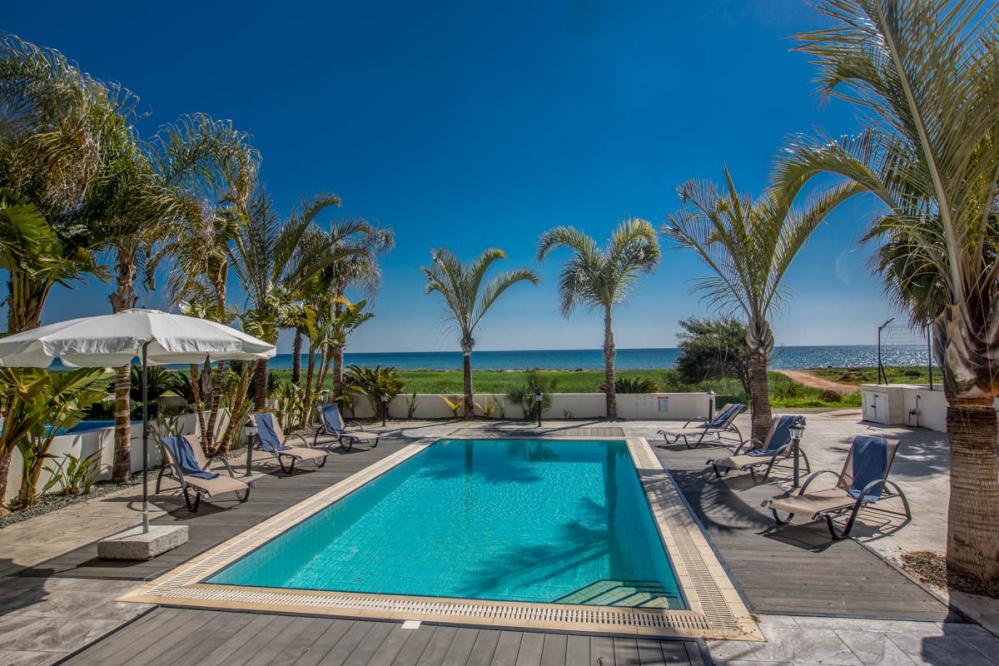 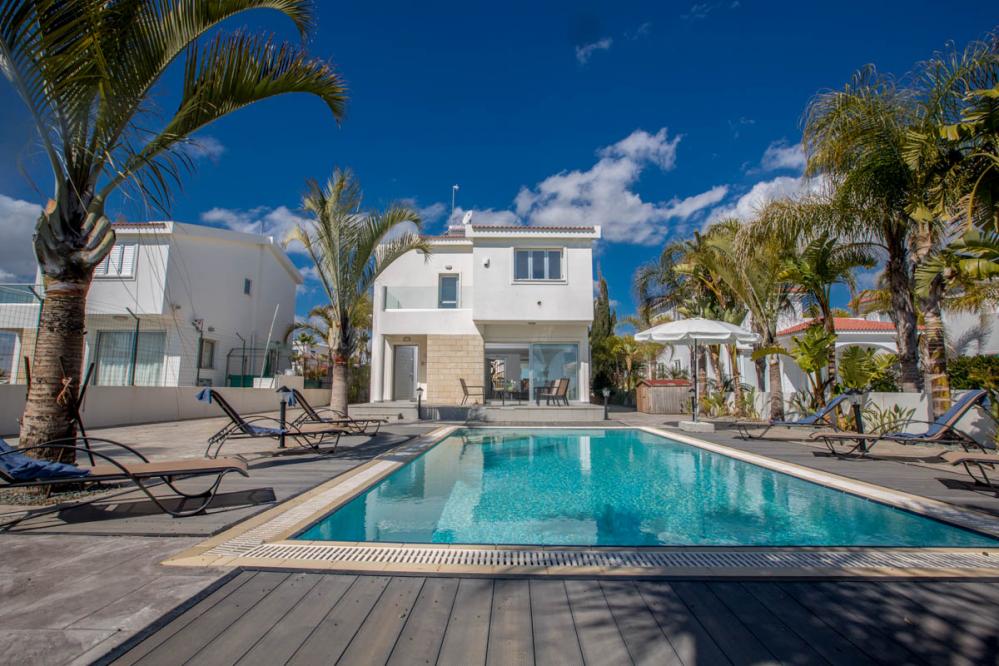 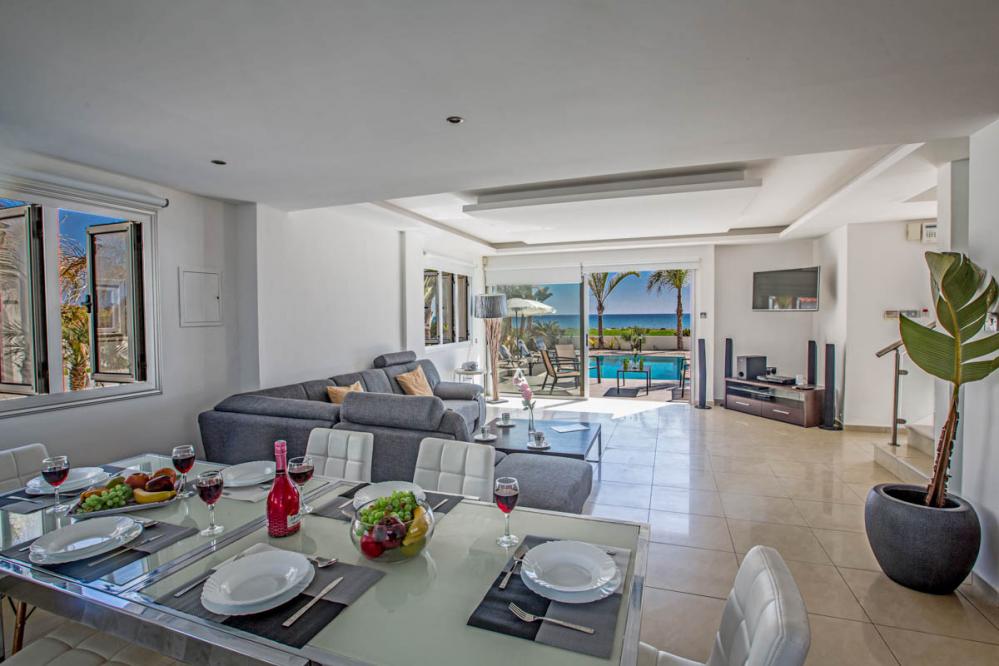 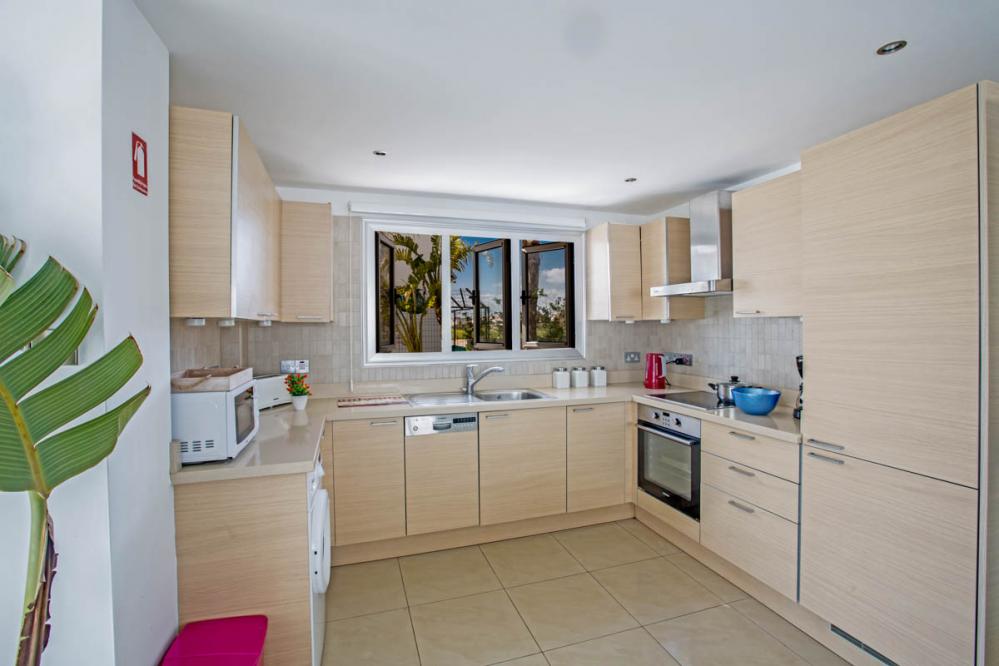 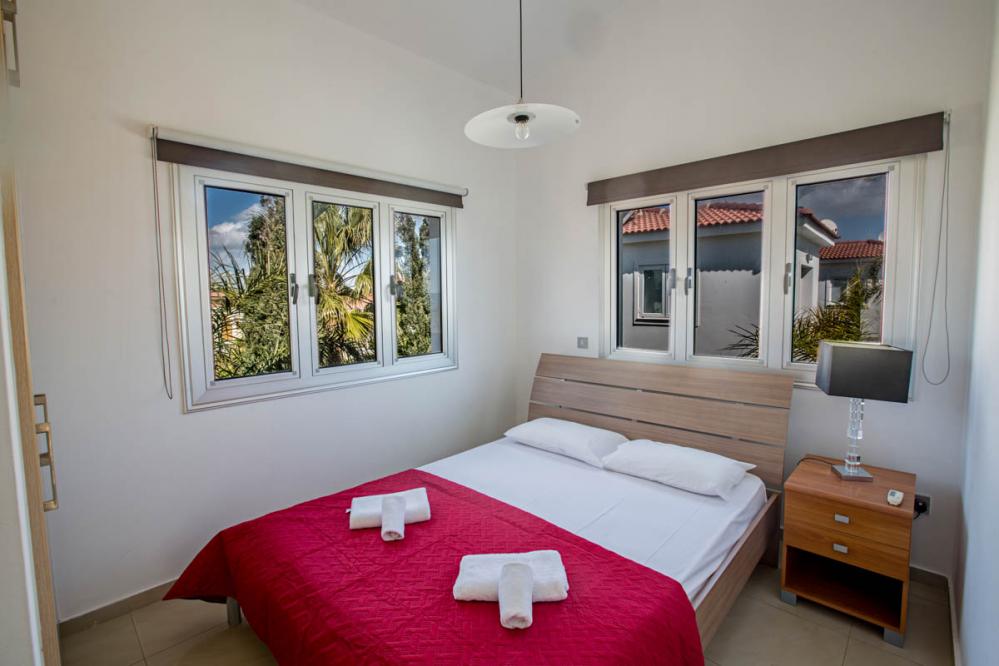 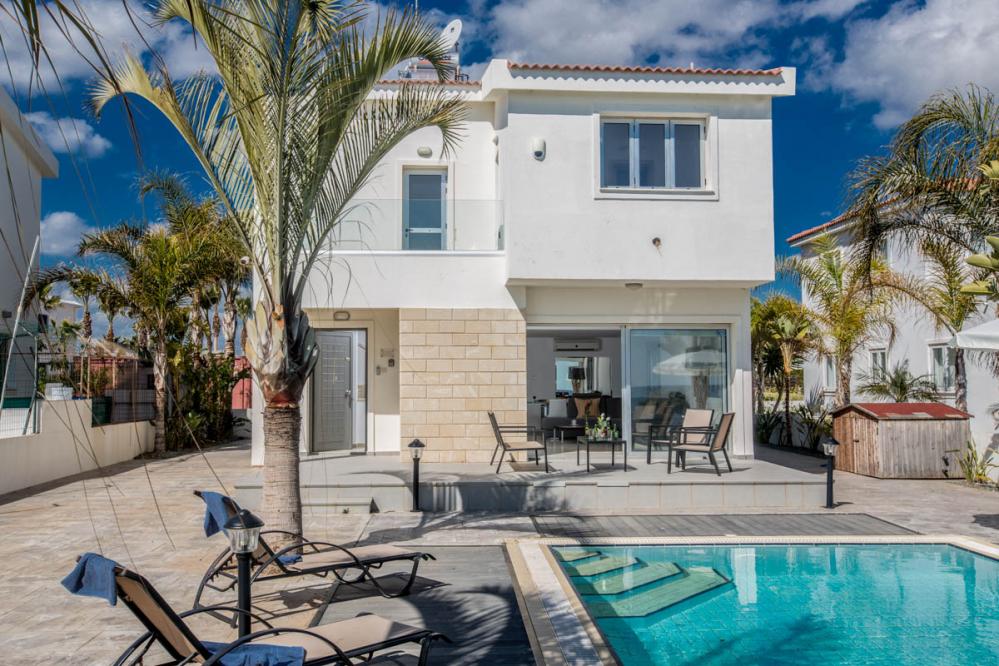 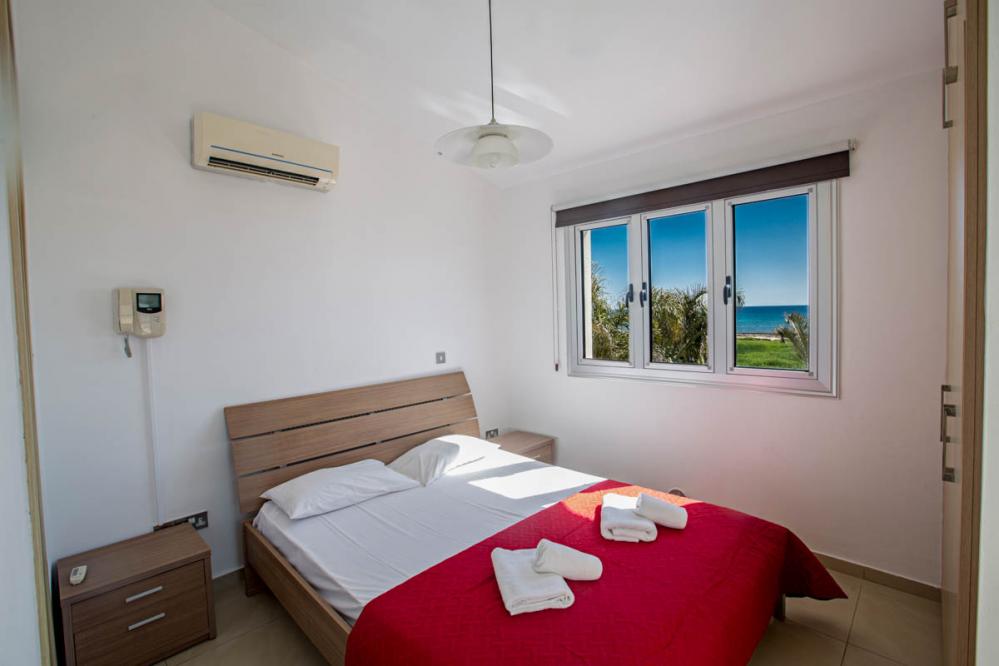 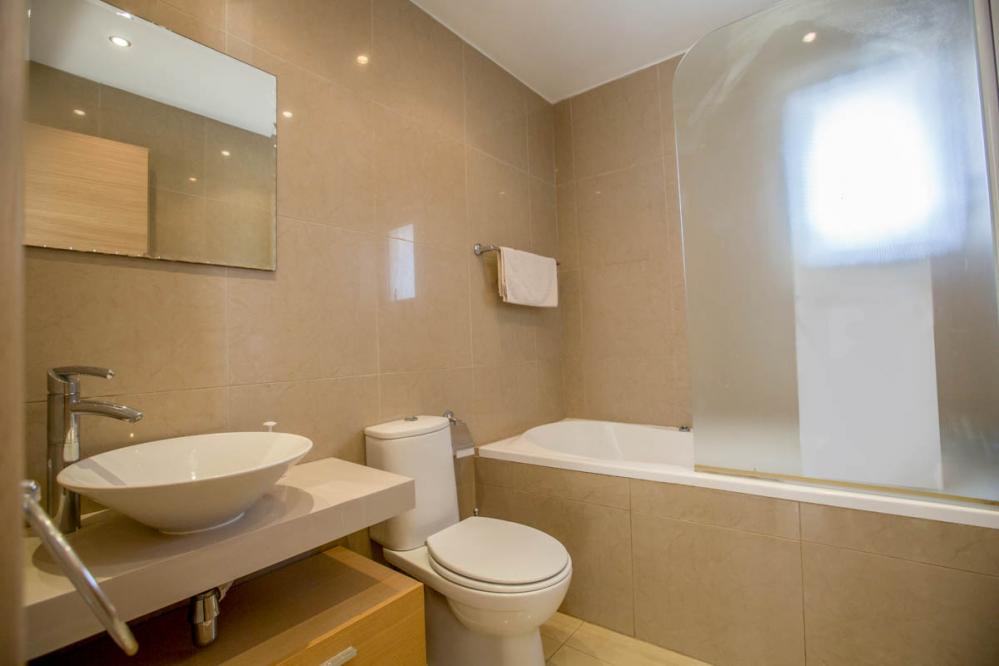 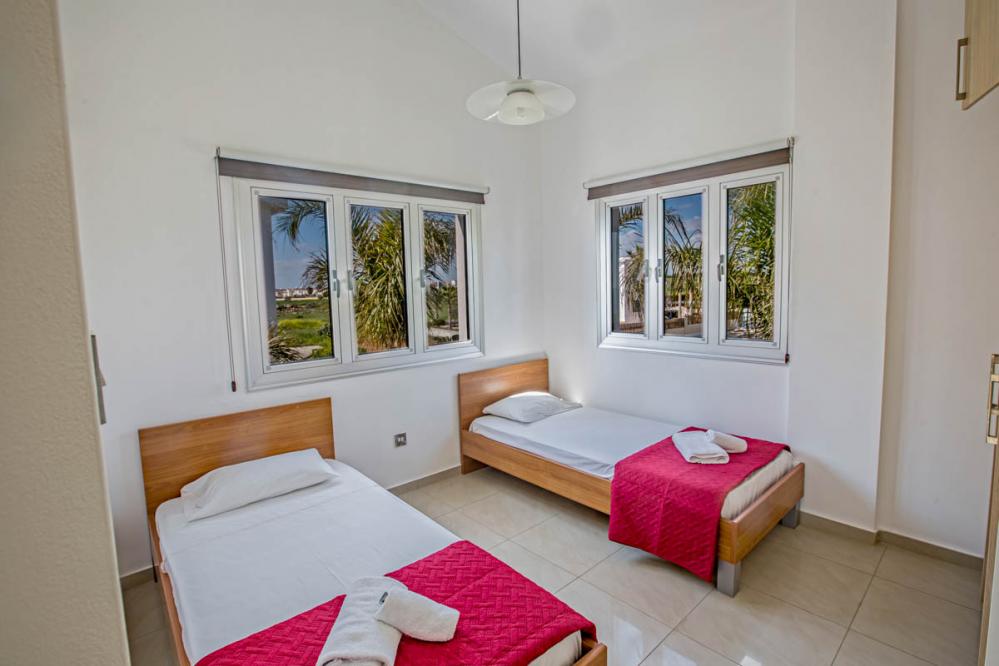 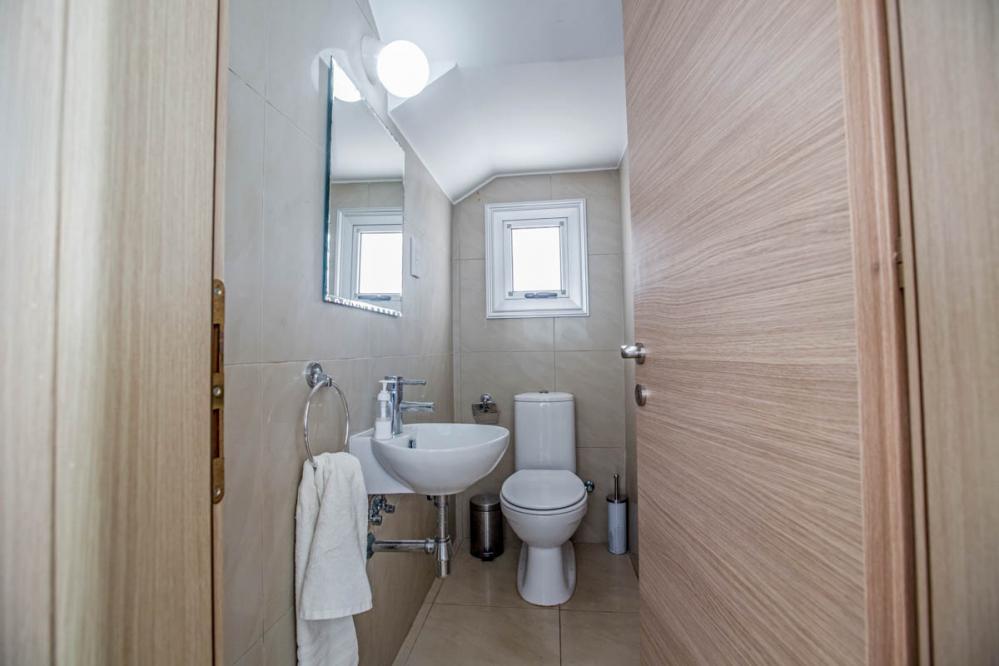 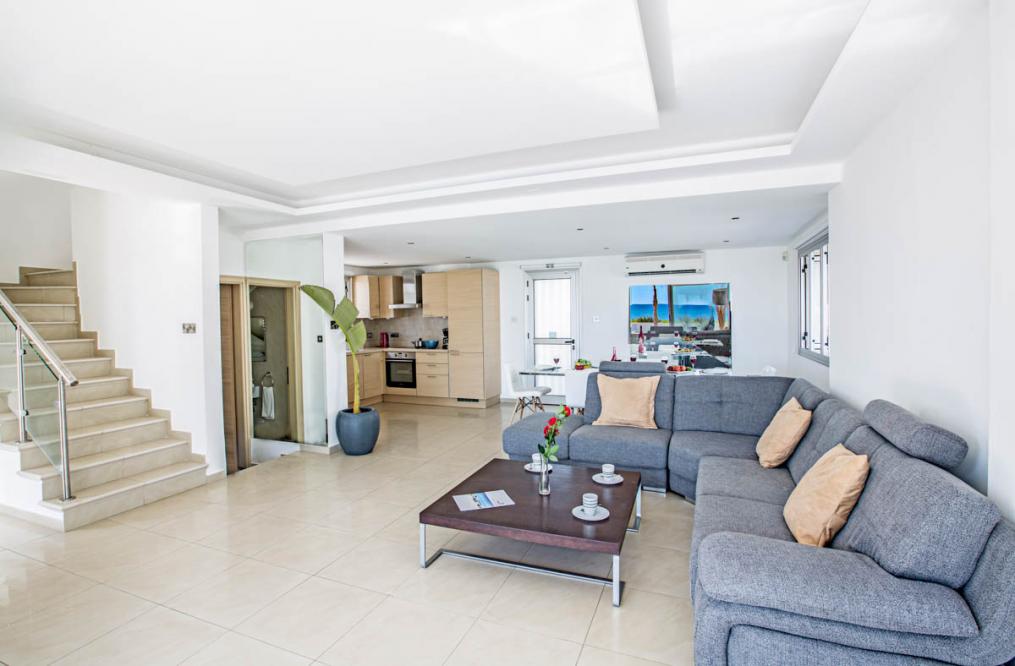 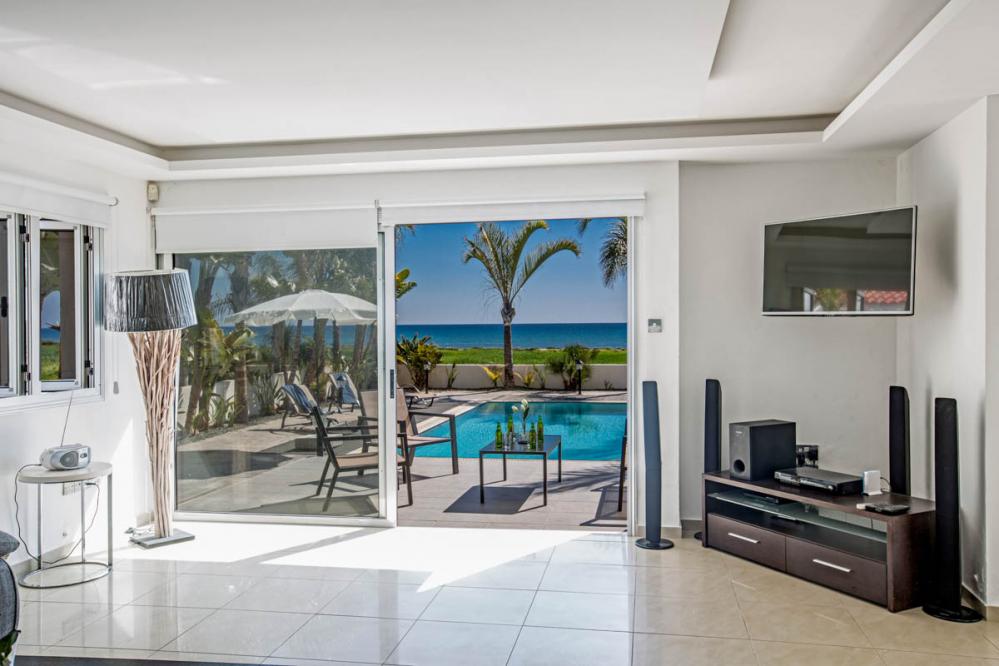 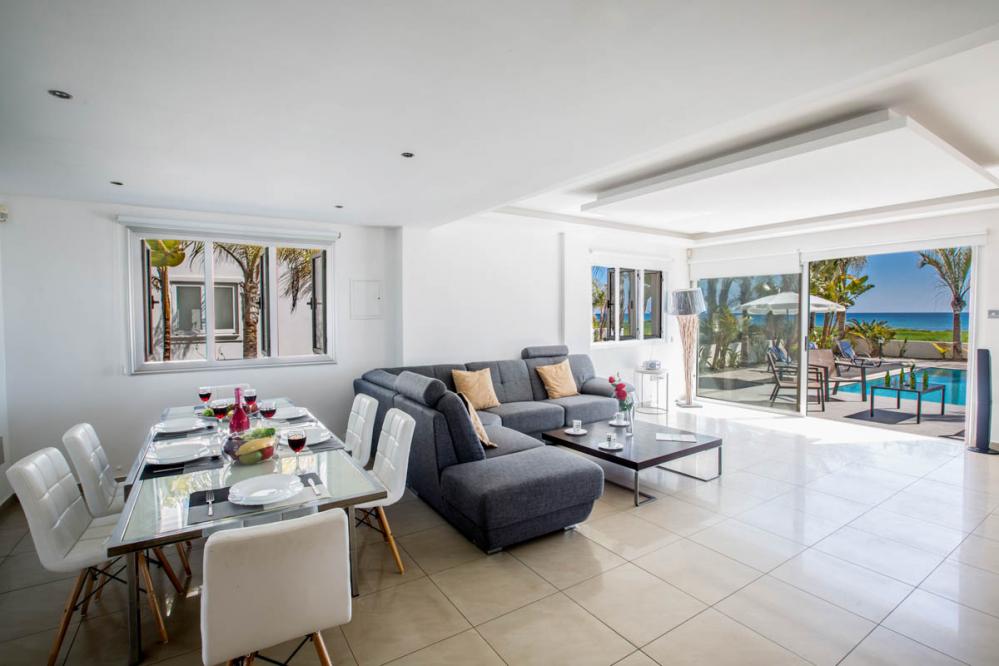 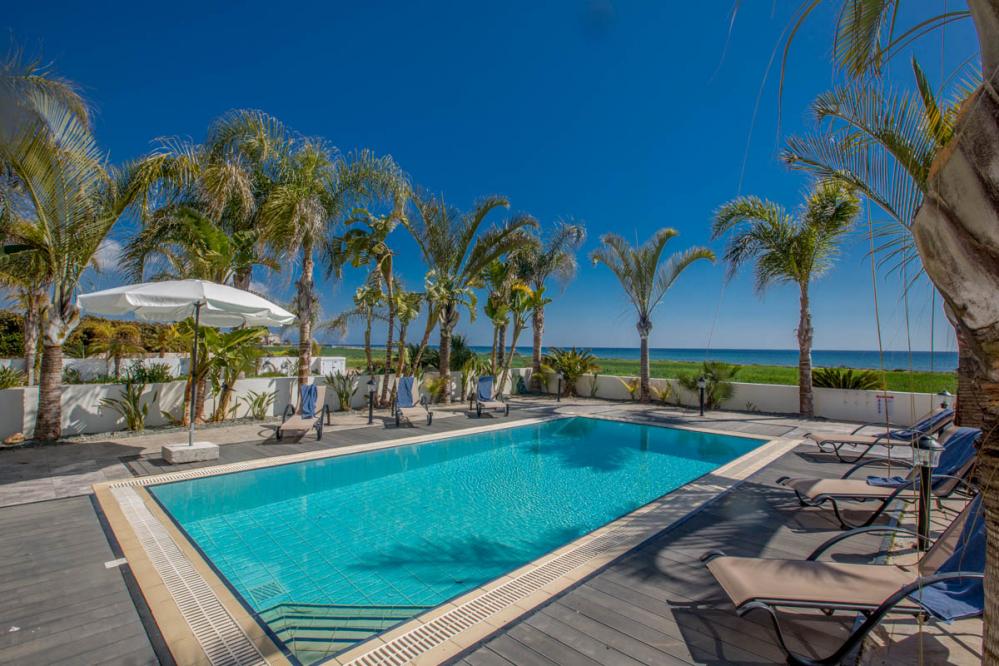 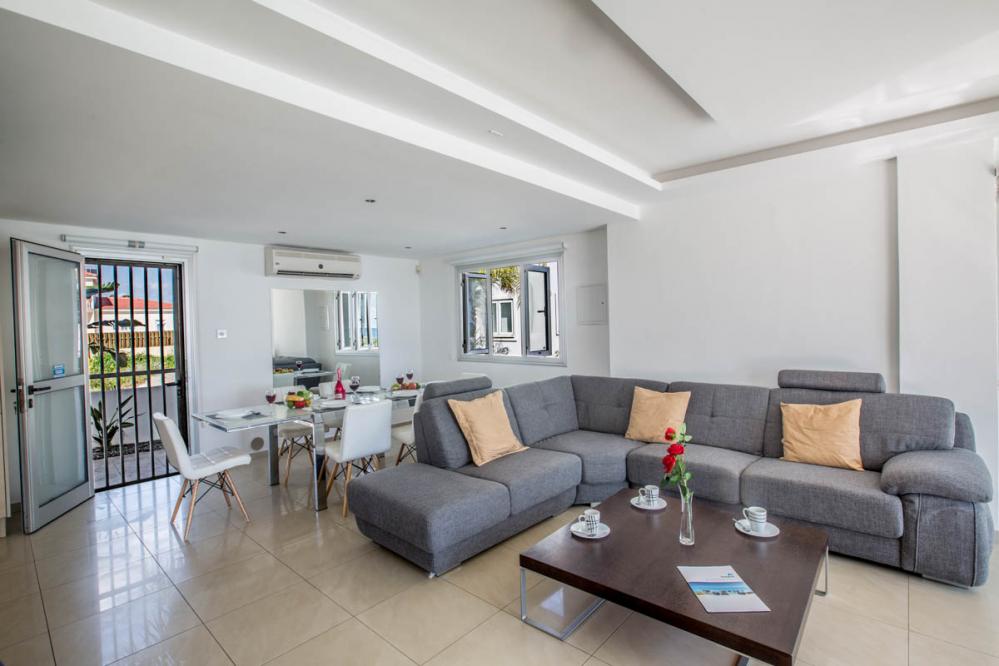 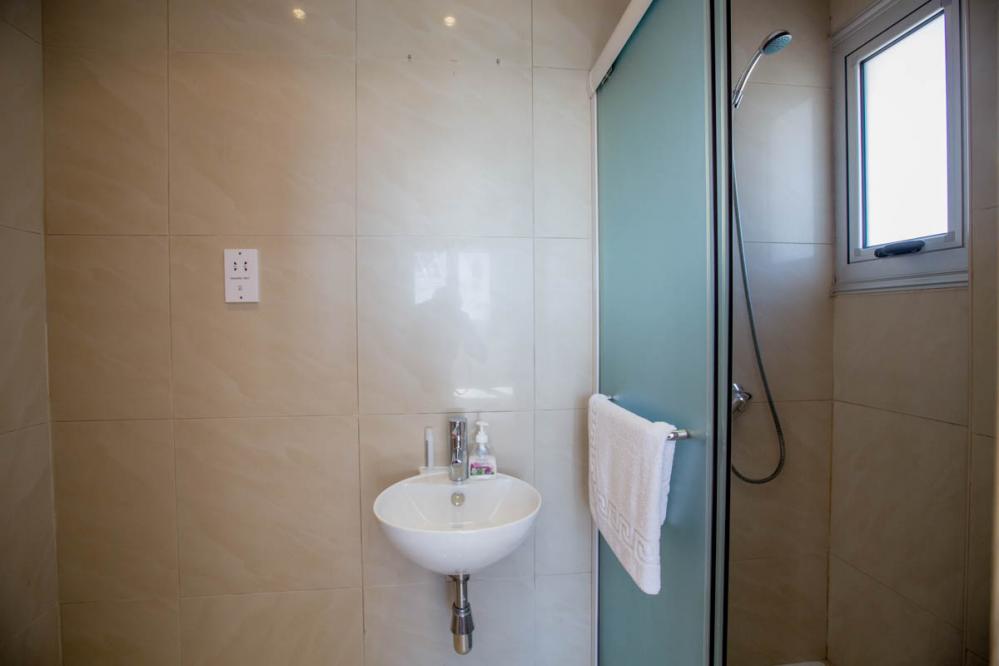 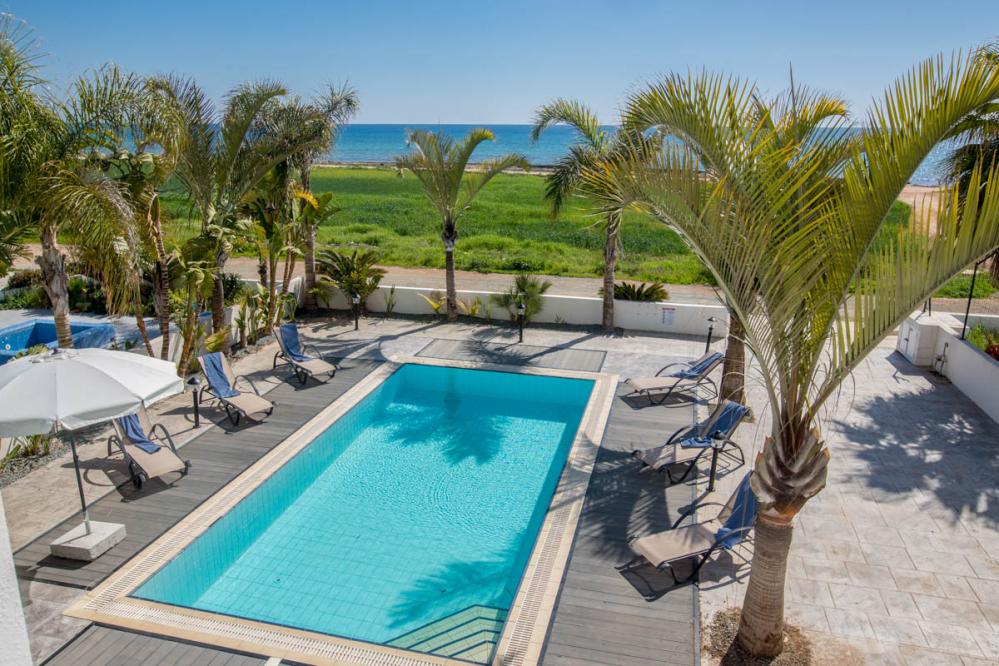 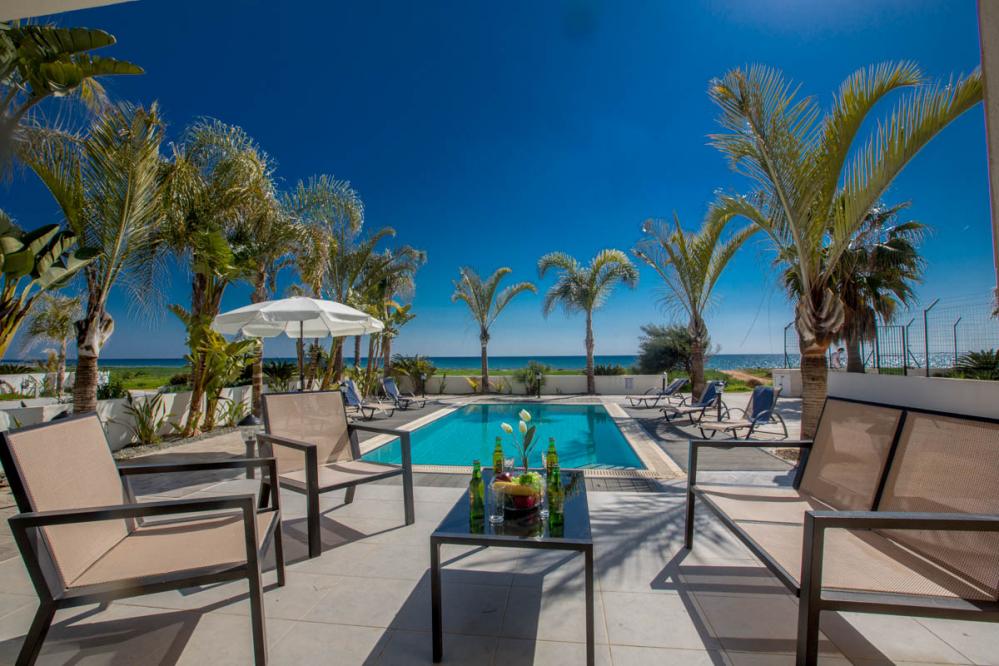 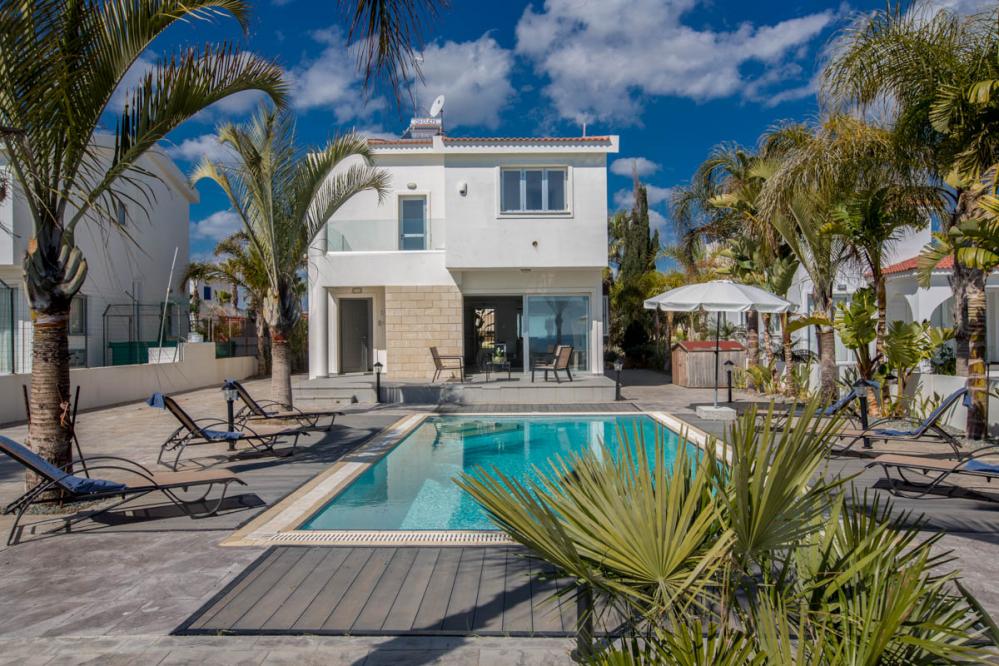 This charming and beautiful beach house can be found just moments from the sea in peaceful Sotira. One of the best features of Villa Marpesia is the gorgeous ...

This charming and beautiful beach house can be found just moments from the sea in peaceful Sotira. One of the best features of Villa Marpesia is the gorgeous azure plunge pool surrounded by copious terrace space, with plenty of sunbeds and umbrellas for shade. Exotic palm trees encompass the pool, adding fresh greenery which you can admire as you take a refreshing dip in the pool.

Beyond the pool area, there is a lush lawn that extends all the way out to the Mediterranean Sea.  Look out over the whitewashed villa walls to the sparkling sea views. There are balconies around the property where you can admire the sunsets.

Step through the huge windows into the open plan living space, with crisp white walls and a dove grey corner sofa - perfect for unwinding on after a long day exploring Cyprus. Pops of warm peach from the cushions decorate the sofas, and there is an interesting lampshade that looks just like a wild mushroom growing up towards the sky. There are tiled cream floors and high ceilings, and huge windows where you can look out to the pool and sea. A flatscreen television is mounted on the wall, above a state of the art sound system.

Just beyond the living room is the well-equipped kitchen, also decked out in white with pale wood, perfect for whipping up home-cooked meals for the family. Dine either inside at the table in the living room or out on the terrace, where there are benches and wooden chairs surrounding a glossy black coffee table. Potted plants decorate the space and add fresh greenery.

Bedrooms are simple and minimal in design, accessed up by the wooden staircase. A mixture of twin and double beds are available, with fresh white linen and contrasting crimson blankets. Windows in rows of three allow plenty of natural light in, and all rooms have pale wood fitted wardrobes with plenty of space.

Villa Marpesia enjoys fabtastuc sea views of the Ayia Thekla coastline. There are 3 bedrooms, 2 bathrooms, and it sleeps 6 people.

Just a few minutes from the beach in the village of Sotira, this villa is in a peaceful area near ...

Just a few minutes from the beach in the village of Sotira, this villa is in a peaceful area near Ayia Thekla. Sotira means 'saviour' and is a province from the Byzantine area. In the town, there are a number of historical churches from the 13th-16th century with post Kominian art including one called Ayios Monas Citadel, which has gorgeous ancient frescoes.

Sirens beach is a picturesque bay with golden sand, a hundred swirling shades of blue and a backdrop of the luscious forest. It is a fantastic quiet beach to enjoy unspoilt nature. There is a single beach bar where you can rent sunbeds and umbrellas if you like. A little more lively yet still family-friendly, Ayia Thekla beach was named after the centuries-old church there. With its powdery sand and shimmering turquoise water, this beach is picturesque, family-friendly and has no shortage of umbrellas for some shade!

This villa is also close to Ayia Thekla, just outside of Ayia Napa. This area on the southeastern coast of Cyprus is known as a party destination, but Ayia Napa is also bursting with rich history and culture. In the centre of town, there is a well known ancient monastery with a tranquil garden setting and a medieval church. Made from honey-coloured limestone with Byzantine influences, this monastery even includes a cave.

Cyprus as an island is dotted with vineyards, pine trees and beautiful meadows. The coastline is adorned with dazzling white-sand beaches and impossibly blue water, while there's hiking, museums and ancient ruins to explore inland. In Ayia Napa town you'll find an impressive selection of atmospheric restaurants and folklore bars, as well as a buzzing nightlife.

A great example of Cyprus's dazzling nature is Cape Greco National Park with its sublime hiking trails such as Aphrodite's Nature Trail. This path has amazing views over the coastline below. Arguably the most spectacular attraction in Cape Greco is the array of sea caves and strange rock formations that have formed natural cavities, nooks and crannies that divers adore. You can swim in the crystalline waters here.

Take a day trip to Paphos to better understand Cyprus' culture and tumultuous history - the island has one of the oldest civilisations in the Mediterranean area. With brilliantly preserved tombs, Roman ruins and ancient mosaics, there's so much to see and do in Paphos. The Tombs of the Kings, interestingly, has nothing to do with royalty but were named after how grand the underground chambers and tombs were.

Paphos is where you will find Aphrodite's Rock, the spiritual home of the Greek goddess of love. Aphrodite is said to have been born of the sea foam in Paphos. Swim around the rock three times you will be blessed with eternal youth, true love, beauty, good fortune and fertility according to ancient mythology.

In Cyprus, food is an integral part of family get-togethers and festivals. Dishes draw influences from Greece and the Middle East, with elements of past civilisations such as Roman root vegetables. The best way to start is with a traditional meze platter with lots of dips. Famously, Cyprus is where halloumi originates, grilled or barbecued and served with pitta bread, hummus and salad.

A holiday in Cyprus is a great choice for families - there's so much to see, do and explore! Close...

A holiday in Cyprus is a great choice for families - there's so much to see, do and explore! Close to the villa, there is an amazing Ancient Greece themed aqua park. Water World is bound to put a smile on their faces. With its mixture of thrilling water slides and gentler water rides. Daredevils will love the Drop to Atlantis slide!

Cyprus is encircled with an amazing array of beaches that are perfect for taking kids to. From Ayia Thekla's relaxed vibes or Fig Tree Bay's watersports, you could take them to a different beach every day and never run out of options. Near the villa, Sirens beach is beautifully relaxed and ideal for a more natural landscape - great for a quick and convenient beach day.

The villa itself is a safe and welcoming space for children to enjoy their holiday. The pool area is bound to be the most popular spot for kids to hang out - they're bound to want to jump straight in. They'll love splashing around and relaxing poolside. Inside, there's satellite television and a comfy couch for cooling down and watching a movie together.

In Paphos, Zephyros Adventure Park has plenty of activities on offer for older children, including sea kayaking, passing tiny coves and exploring geological wonders. They can go hiking and mountain biking on the outstanding trails through pine forests and amazing scenery. And in the evening, for kids who haven't exhausted all their energy, check out a funfair called Parko Paliatso. They'll love the theme park rides, traditional carousels and carnival snacks.

Cypriot cuisine is bound to get kids interested - it's full of flavour and not too spicy! With some familiar dishes like halloumi and hummus, they're bound to want to get involved. There are also plenty of Mediterranean and Western options within easy reach. Order them a meze plate to try a variety of dishes. Keftedes, a type of meatballs, tend to be popular with children, and if all else fails, some sweet baklava should do the trick. 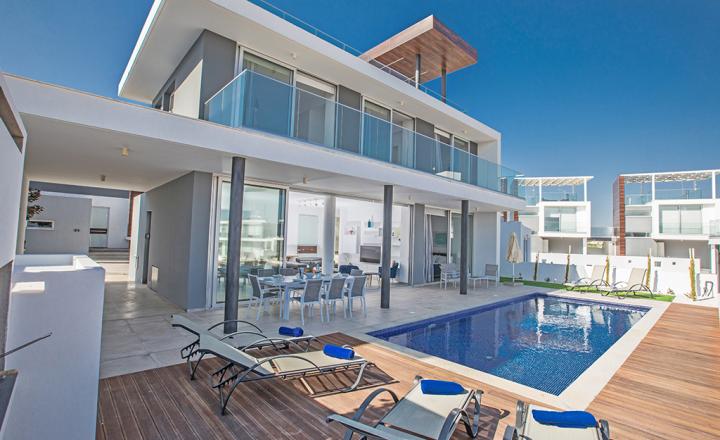 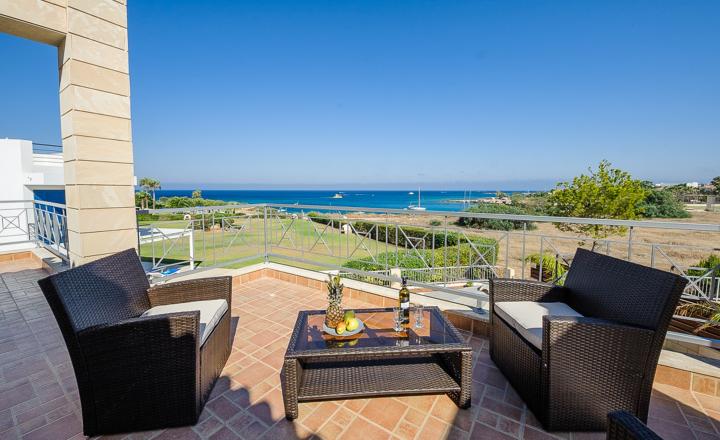 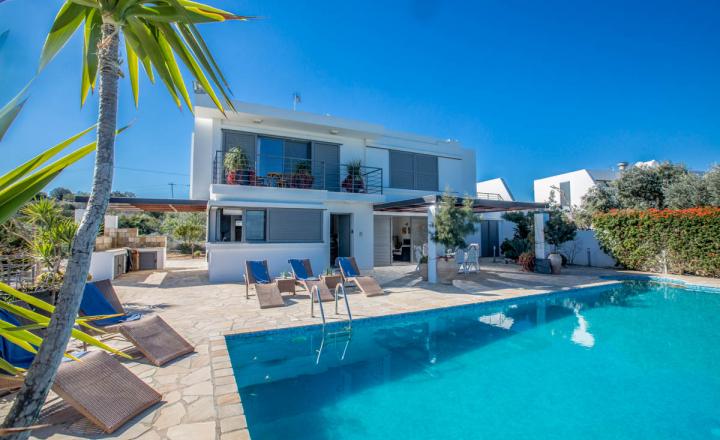 Ask a question about Villa Marpesia