Shrove Tuesday, Fat Tuesday, Mardi Gras… this beloved day goes by many names and is fabulously celebrated with local traditions all over the world. Here in the UK, we go wild for pancakes, which everyone at Oliver’s Travels agrees is pretty great. But let’s be honest, the celebrations across the Channel put ours to shame. The Mardi Gras carnevals in France are colourful and chaotic, and can sometimes last for more than a month! If you’re keen on masquerades, beignets and dancing in the streets, our luxury holiday villas in France make the perfect base for exploring the festivities – so let us introduce you to the top five cities for Mardi Gras in France. Let the good times roll… 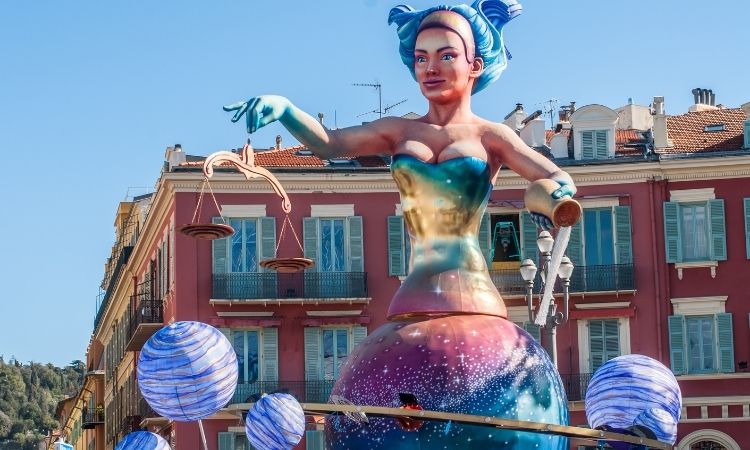 Nice was the first city in France to put on a big blow out for Mardi Gras, and they still do the grandest carnival of all. During the Nice celebrations over a thousand musicians and dancers from all over the world join in parading the streets from dusk until dawn alongside giant character floats which illuminate the city at night. This grand party on the French Riviera attracts hundreds of thousands of spectators every year, and if they arrive completely disguised for the masquerade entry to the main event is free, but if not they need to pay a fee – so pack strategically.

One of the most iconic events of the Carnaval de Nice is its Battle of Flowers, which takes place going down the Promenade des Anglais. The spectacle features floats adorned with spectacular and inventive floral arrangements and costumes, showering spectators in a rain of flowers as they go along. The Battle of Flowers started as a simple handing out of flowers to tourists at the carnival over a hundred years ago when the Festival Committee was first founded. It has since grown into a massive event highlighting the local floral diversity and artistry.

The final night of the carnival finished off with an effigy of the king being put out to sea on a little boat and burned before a grand fireworks show in the Bay of Angels.

Check out our selection of villas in Cote D’Azur. 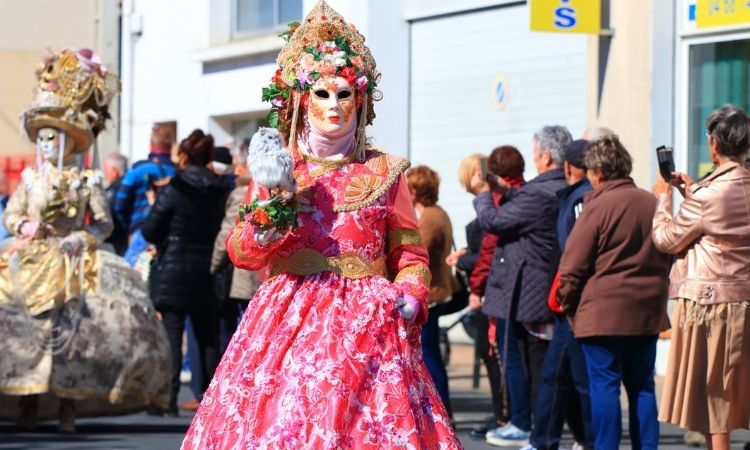 The Limoux Carnival is the longest running festival of the French Mardi Gras season, lasting from the end of January all the way to the beginning of April (long after the actual event of Fat Tuesday). While it is not as well-known than the Nice celebrations, the festival in Limoux has a much more traditional ambience, with a focus on folklore and traditional music and costumes. It can be traced all the way back to the middle ages, and modern celebrations incorporate many of its historical conventions.

Each weekend of the festival, three times a day, the city is filled with the music of one of the twenty “carnival bands”. They parade down the streets along with pantomimes dressed as caricatures of society, like masked millers and dancers. Each parade is led by a different group that sets the pace of the day and interacts with the public, making every performance different from the next. The last band to perform during the festival gets the honour of giving the season its theme, and to close the carnival on Palm Sunday. On a balcony in the main square, the life-size figure of the Carnival King awaits his annual burning to close out the festivities.

After the final parade, there is a great feast with amazing local foods and wine, which tends to break up into hundreds of parties all over the city.

Check out our selection of villas in Languedoc. 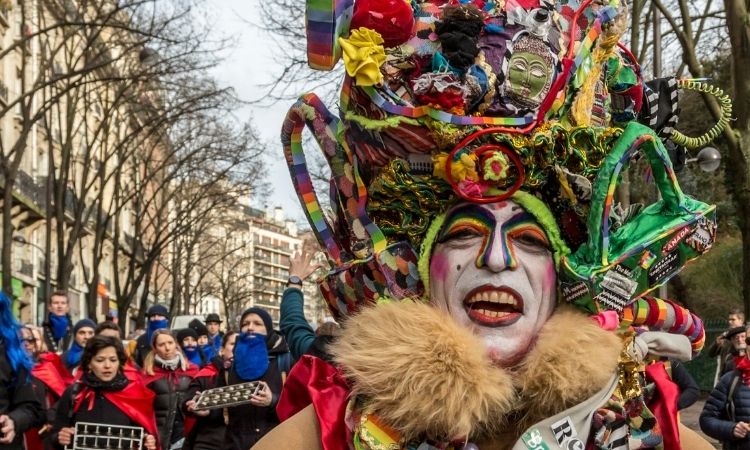 As expected, the capital city of France puts on a grand event for locals and tourists to celebrate Mardi Gras together. Like many of its sister festivals, the Carnaval de Paris has a long and rich history (as pictured in Claude Monet’s Carnaval boulevard des Capucines from 1873) but took a long hiatus between 2952 and 1997. Luckily for us, it has now returned! The noisy and colourful parade attracts many thousands of spectators every year to its route between Place Gambetta and Place de la République where it ends in a huge party.

The carnival runs with a different theme each year, from dragons and knights to underwater worlds and even fruits and vegetables. It consists both of the walk of masks, where civilians show up in fantastical disguises to celebrate together, as well as the grand procession which is traditionally led by a cow. Following said cow, you’ll see large puppet floats, samba dancers and performance artists. It’s always a well-welcomed event to invite spring into the city.

Check out our selection of villas in Paris. 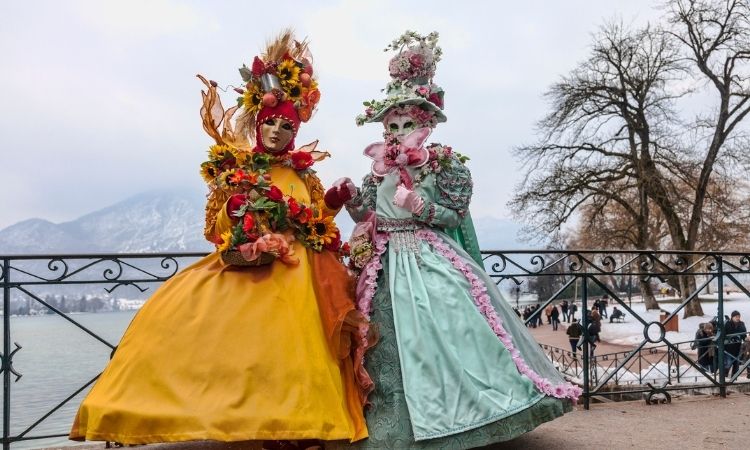 The Annecy Venetian Carnival is a mysterious and elegant take on the traditionally chaotic Mardi Gras festivities. It’s known to be one of the most beautiful events to attend in France, with people dressed in classic Venetian costumes in the lakeside town surrounded by snowcapped Alps. This lovely festival takes place over two days filled with parades, exhibitions and concerts, often described as refined when compared to, for example, it Nice and Dunkirk counterparts. Instead of marching bands and parade floats, the Venetian Carnival invited people to silently wander the canal-lined streets of Annecy old town dressed up in their costumes.

Participants in the Venetian parade put tremendous effort into their ornate, unique costumes, and as the event takes place two weeks after the day of Mardi Gras, many of them dress up to visit the Carnaval in Venice as well. Both towns lend themselves to be fantastically picturesque backdrops to the many photos taken with tourists and children on these days.

The Carnival in Annecy is a free event for all, that will take place rain or shine. The scale of the event is still relatively small, but as its gaining so much popularity it is becoming increasingly difficult to organize. We would recommend visiting before it loses its charm.

Check out our selection of villas in Rhone-Alpes. 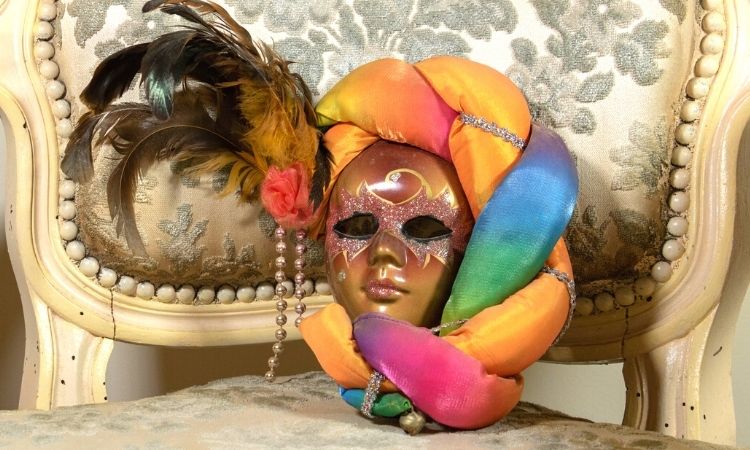 The Dunkerque Carnival lasts thirty days in total but reaches its peak for three festive days around Mardi Gras. Back in the day, it was a feast for fishermen, but in modern times it has turned into a spectacular carnival. Its overarching theme seems to be ‘the most bonkers thing you can think of doing,’ as it features cross-dressing, groups of fishermen in traditional yellow raincoats competing to make the most noise and the Mayor himself throwing kippers at the crowd from his balcony. It’s definitely France’s noisiest carnival and the one for people who love a crazy party and marching bands playing in the streets.

The Carnival procession itself is known as the Bande. It includes musicians, massive parade puppets and carnival-goers lined up singing traditional songs. At the end of three days of music, crazy costumes and endless colourful umbrellas, the party ends at Place Jean Bart with a rigodon. This includes a jig and carnival-goers getting down on their knees and holding hands while singing a song in honour of naval hero Jean Bart.

International visitors to the Dunkirk Carnival will often go dressed up in traditional costumes from their home countries, everyone is welcome to participate!

Check out our selection of villas in Northern France.

If you are inspired to spend mardi gras in France, we have loads of choices when it comes to accommodation. Check our portfolio of amazing french luxury villa rentals and get in touch with our concierge team who can help you on your search. Laissez les bons temps rouler!