Our gorgeous photographer Laeti recently got back from a trip back to her hometown, Lyon. And although you don’t have the pleasure of knowing her personally, let me tell you – she talks about Lyon a lot! So let’s cut the fluff and jump straight into it!…

Tell us where you’ve been…

My boyfriend (Alex) and I went to my beautiful hometown, Lyon, for 5 days!

What was the highlight of your trip?

We landed quite early and by the time we got to the old town (where we were staying), the Airbnb was not ready. So we went for a little stroll and found this AMAZING brand new bakery – Boulangerie Saint Paul! It opened a few days before we arrived and boy was it good. (I can’t find their website but if you do go to Lyon, please pay them a visit, they are amazing people.)

Their pastries were so delicious, we went there every morning without fail for 5 days and each time we had something different. We tried most of their pastries but they also do some savoury things – quiches, pizzas, sandwiches etc. Oh, and because we are difficult people that hate coffee, they had to make us hot chocolate – made from the George – this is what the owner called his machine. Brilliant isn’t it?? 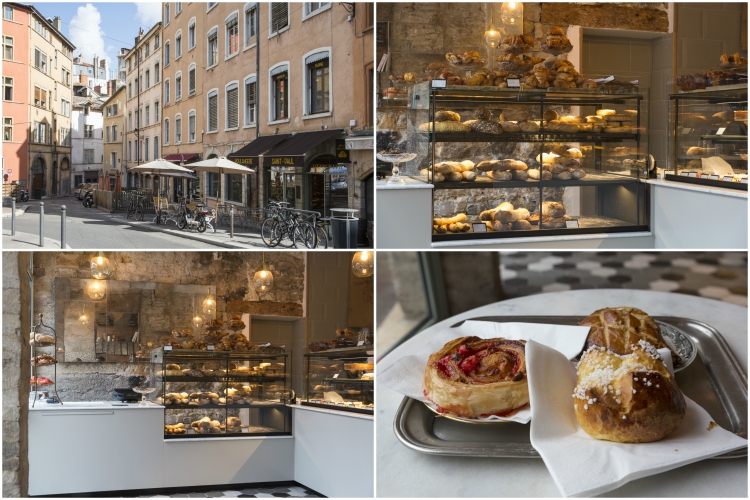 Another highlight was Basilique Fourviere. You can see it from nearly everywhere in Lyon. It’s on top of the hill and it’s the most amazing church I have seen ever, and you can ask Alex, I have seen a few. 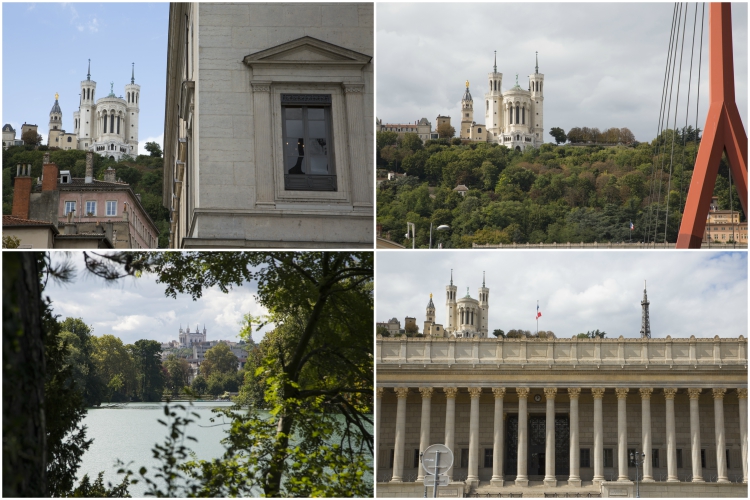 The Virgin Mary has her own gold statue that is always illuminated. I was told the Virgin Mary saved us, les Lyonnais, from the plague during the Middle Ages, which is why every year on the 8th December, we have La Fete des Lumieres (the Festival of Lights). Everyone puts candles on their windows or balconies, and the city organizes a beautiful festival where lights are projected on all our most beautiful and historical buildings.

Got carried away but to get to Fourviere, you have to go up the hill. There is the easy way – le Funiculaire. It’s something to do once because you’re never quite sure if you’ll ever make it alive as the train is so ancient. The better, more fun way is walking!!!! There are so many roads and hidden ways to get there! I lived in Lyon for 18 years and discovered a new way with Alex! This city is always an experience, however many times I go there. 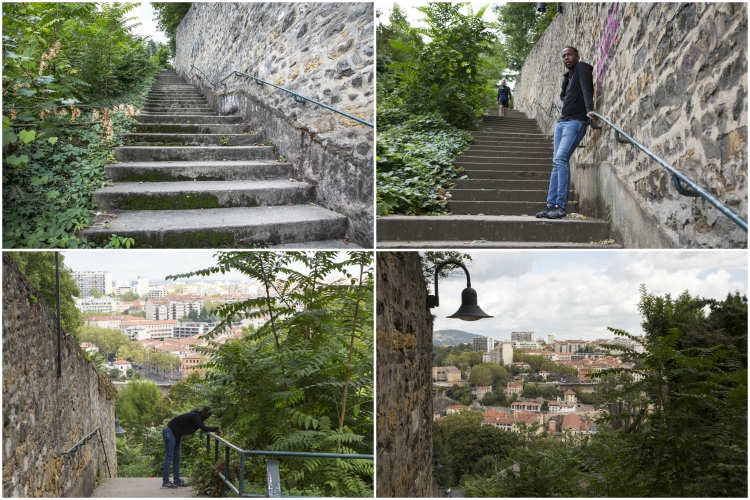 The longest stairs I have ever seen…

This time, we took the longest stairs I have ever seen. Some crazy man was going up and down with weights!

As you can see from the pictures, you cannot see the top of them from the bottom and vice versa. But the view was worth it! Look at my poor little Alex, all tired.

And then we enter the church… I mean if the pictures don’t speak for themselves I don’t know what else to tell you. 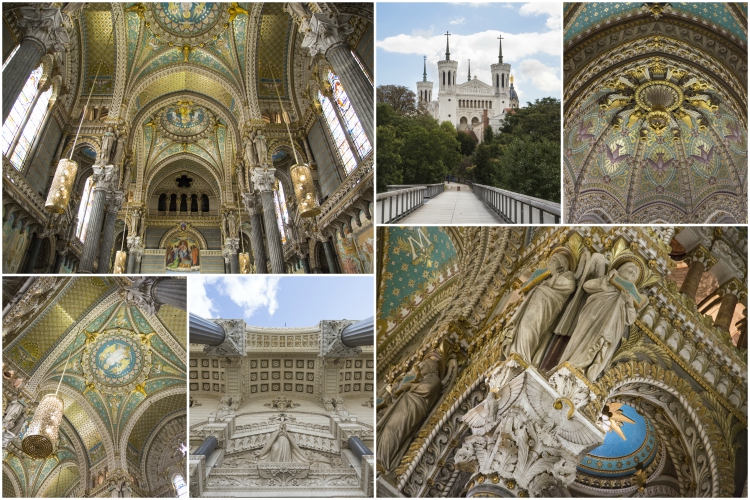 Inside the Basilique Fourviere

Isn’t it wonderful? We could have stayed there forever! It’s the best. Simply the best – Tina Turner playing in the background is all you need.

But then, even better the view of Lyon! We didn’t have the time to go at night so no pics but I’ll show you guys next time. 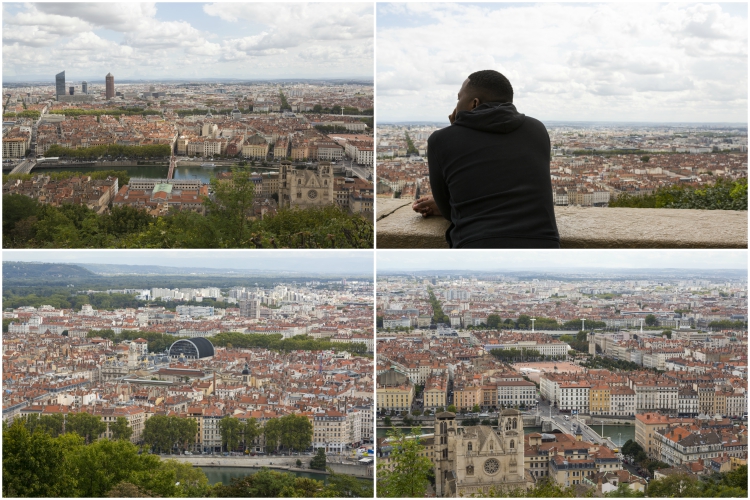 The view of Lyon

And the way down from the church is something. Again, there are many roads and ways to get back to sea level and all are beautiful. So pick one and be happy! We picked my favourite (with more stairs!!!) to end up back in le Vieux Lyon. 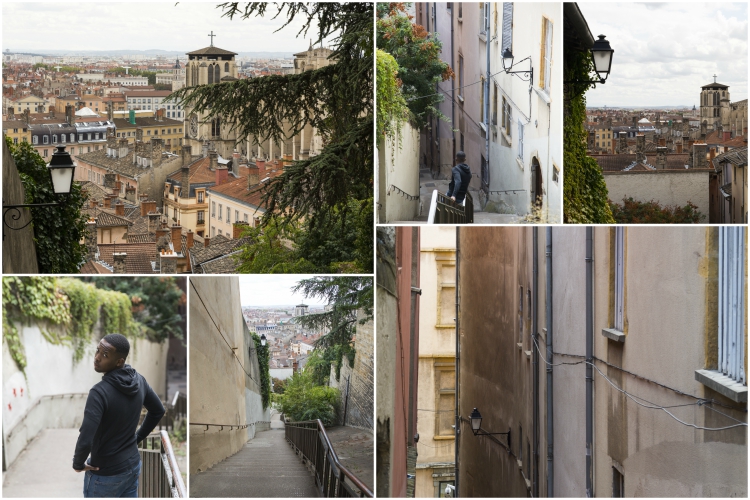 There are more highlights but I have a word count to respect! So I will move on to the next question 😉

What and where was your best foodie moment?

Unfortunately, we didn’t take a lot of foodie pics. Normally I’m on it but completely forgot this time!

One thing you have to have though is the pralines. I’m not sure what they are made of and it doesn’t really matter to be honest because they are delicious! You can eat them with a variety of deserts or you can also eat them by themselves. Even if you don’t have a sweet tooth, try them anyway. You don’t want to have this regret on your deathbed because trust me you will. 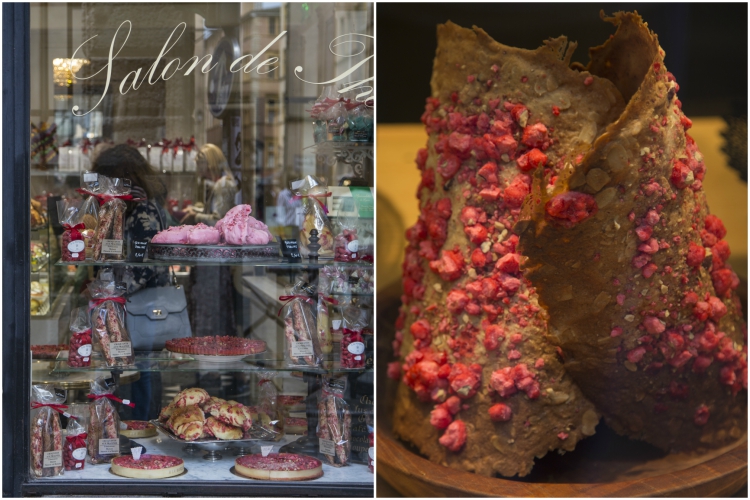 There are a lot of specialities you will have to try! My great uncle owns Chez Gast a shop that sells the best charcuterie of all times – unfortunately, he passed away last year, but good news – his wife and son have taken over and it’s amazing!!! My mum used to work there too. It’s a family treasure really. So go buy loads and spread the word, it’s the best place ever!

For anyone travelling to Lyon, what can’t they miss?

1. We have two rivers in Lyon –  le Rhone et la Saone. And you can cycle on both. Or walk along them. A lot of people sit, drink and eat on les Berges. There are also a few boats on the Rhone side that are bars and they turn into clubs at night! Booze, boat and water. What could possibly go wrong?? 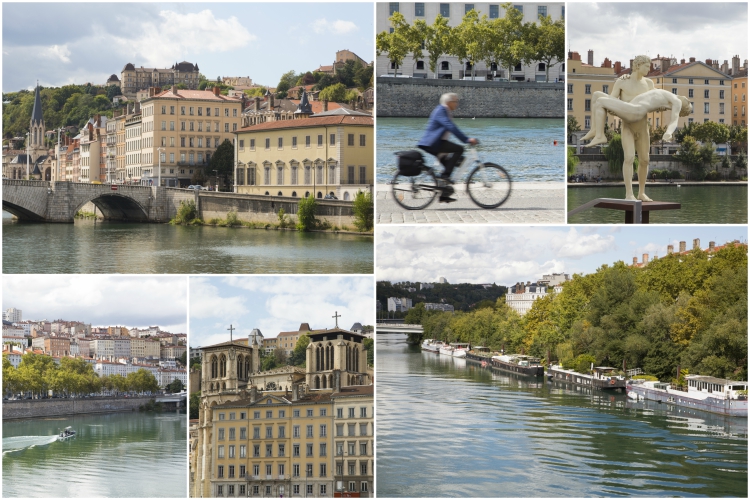 2. Le Parc de la Tete d’Or! It’s a huge park, with a beautiful lake in the middle. It also has a zoo. All for free! You can picnic, dance, run, do everything you want. A lot of people get married there, in the rose garden. It’s truly beautiful and very relaxing!

First, let me show you the park: 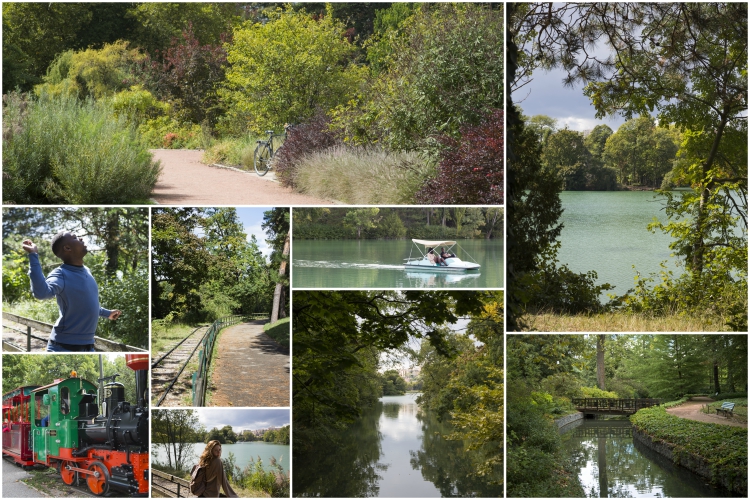 And now the zoo! 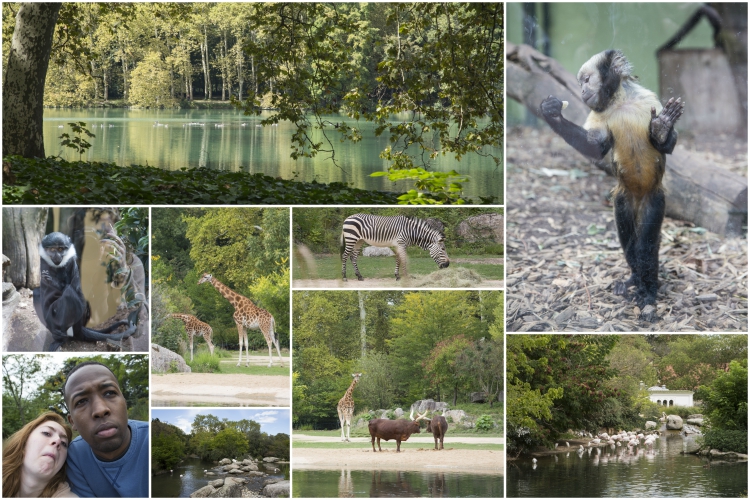 3. You should also visit a museum. Le Musee des Beaux Arts is the one we went too. They have this little park before the museum, which is nothing special in itself but it’s peaceful and you can admire the beautiful arches! 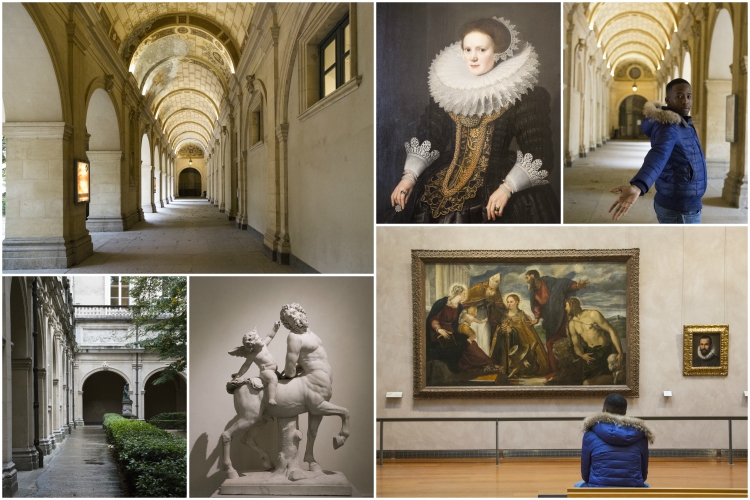 4. Le Vieux Lyon of course. All the buildings are colourful, there are loads of bars, restaurants, fun and things to see! This is where you can find the Bouchons – they serve traditional Lyonnais food. The one we really liked with Alex was Les Lyonnais. OMG and don’t forget to order a ‘communard’ – you won’t regret it! I don’t like red wine and it went down like juice! 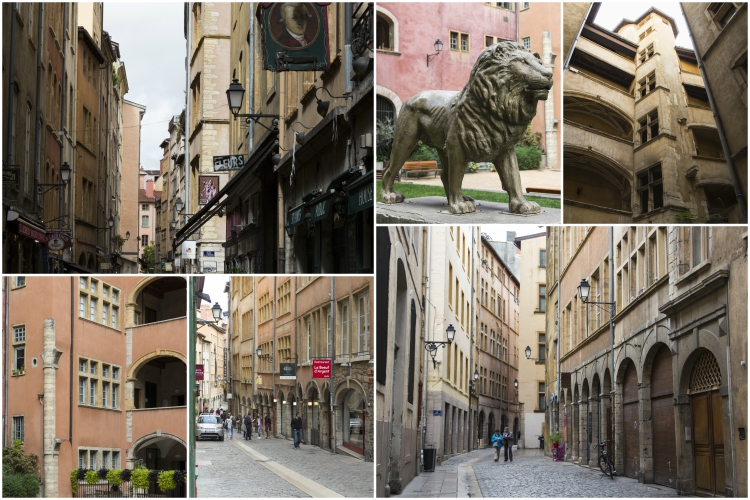 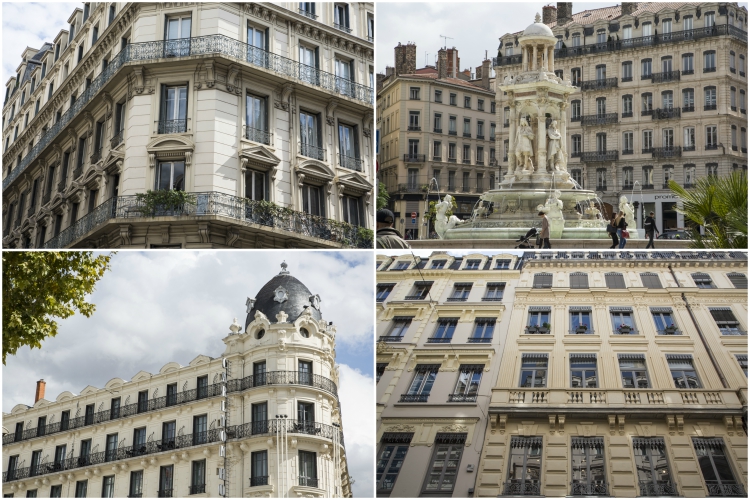 Every angle has a different story to tell!

Lastly, describe the region in 5 words…

It sounds like Laeti and Alex had the best time!! Although (sadly) we don’t yet have villas in Lyon, be sure to check out our first-class villas in Europe and the Carribean. And if you need any help at all, get in contact with our concierge team.