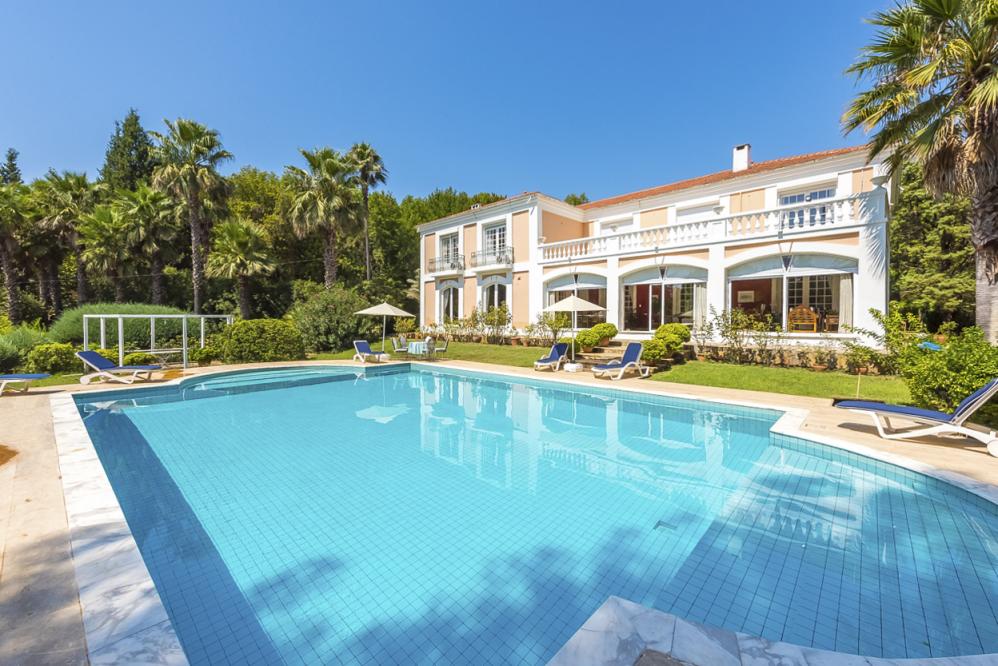 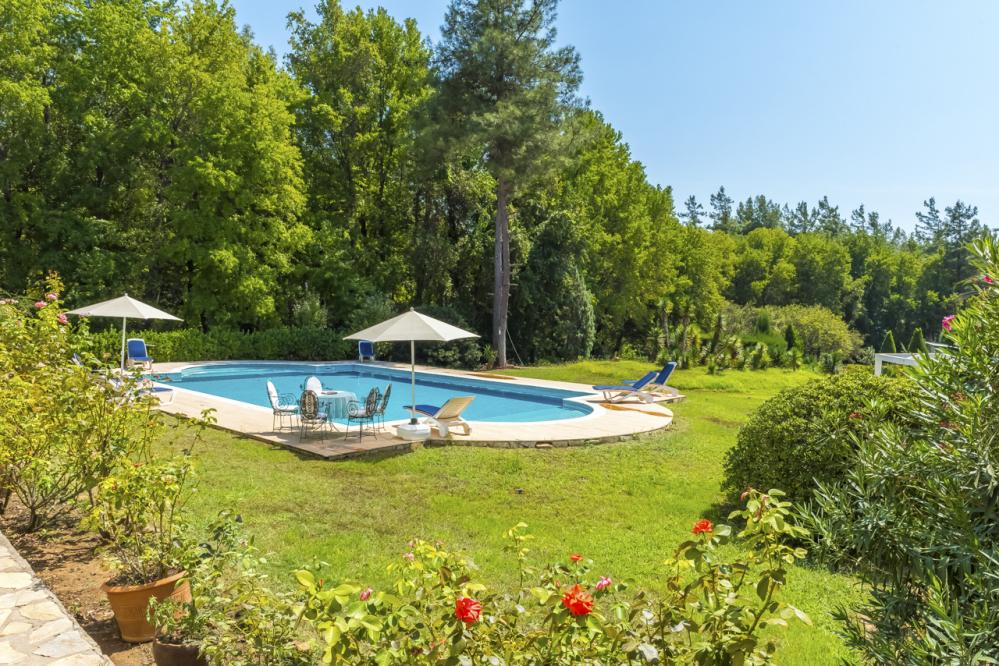 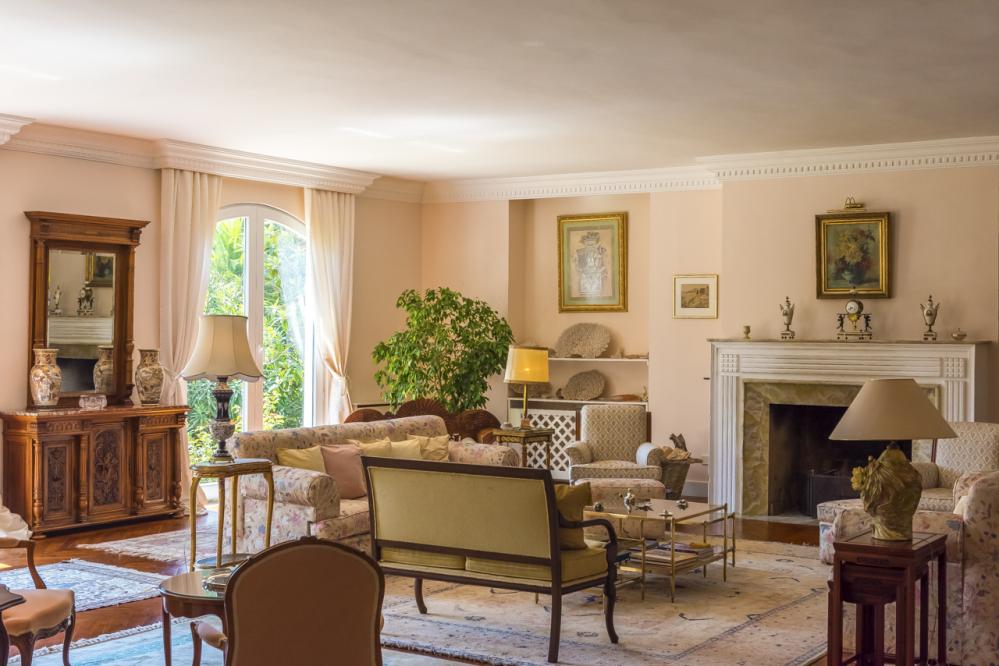 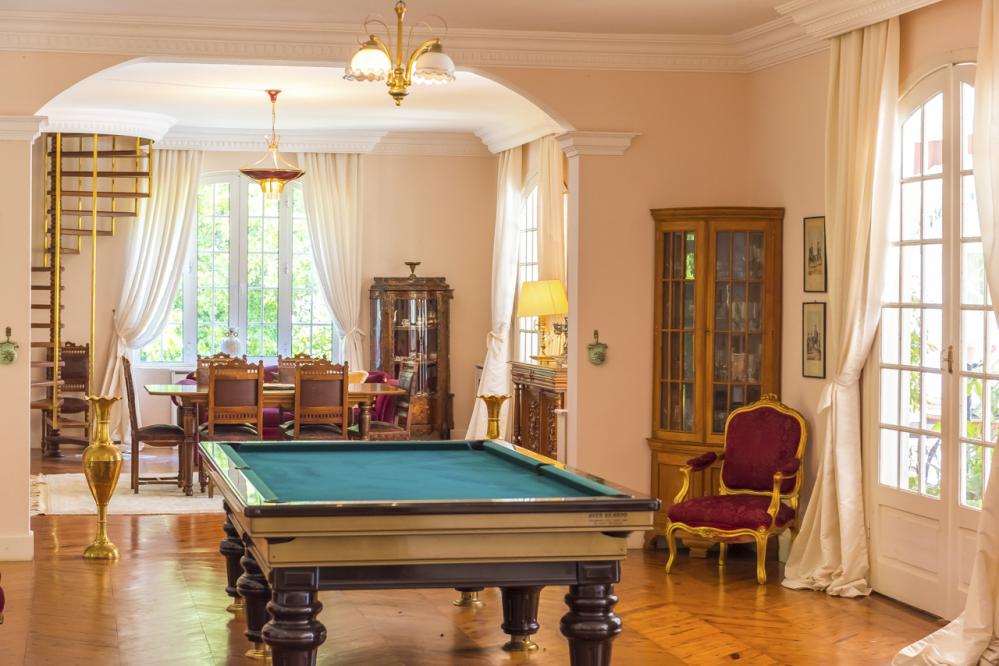 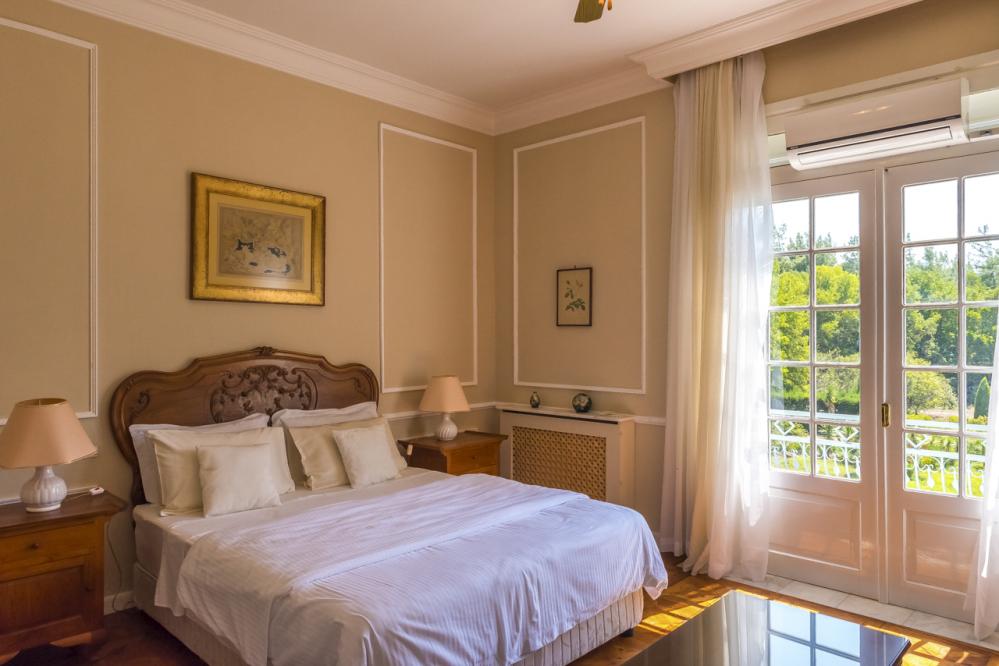 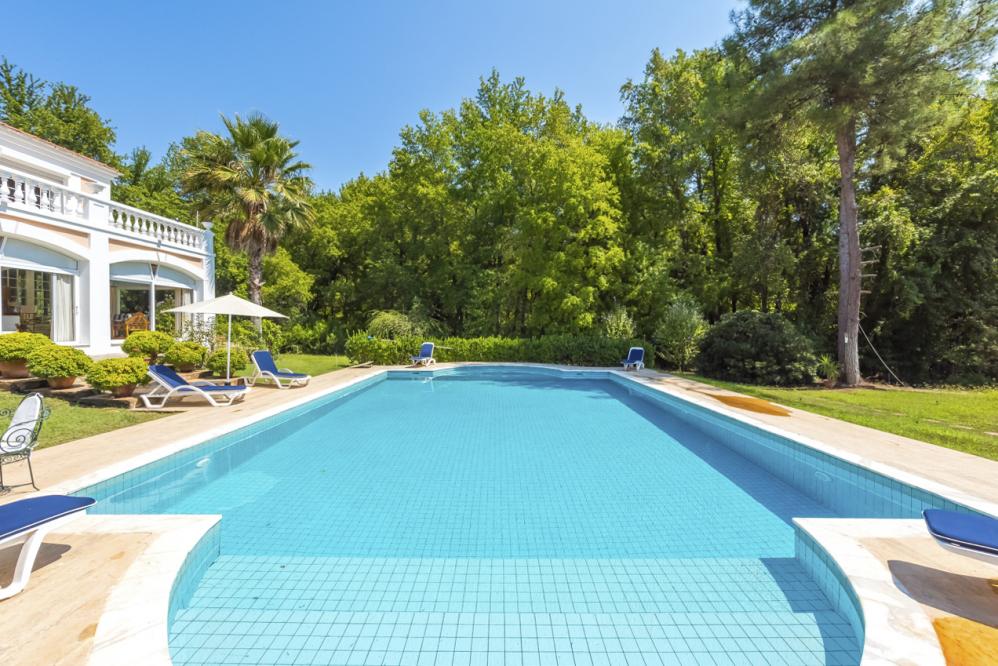 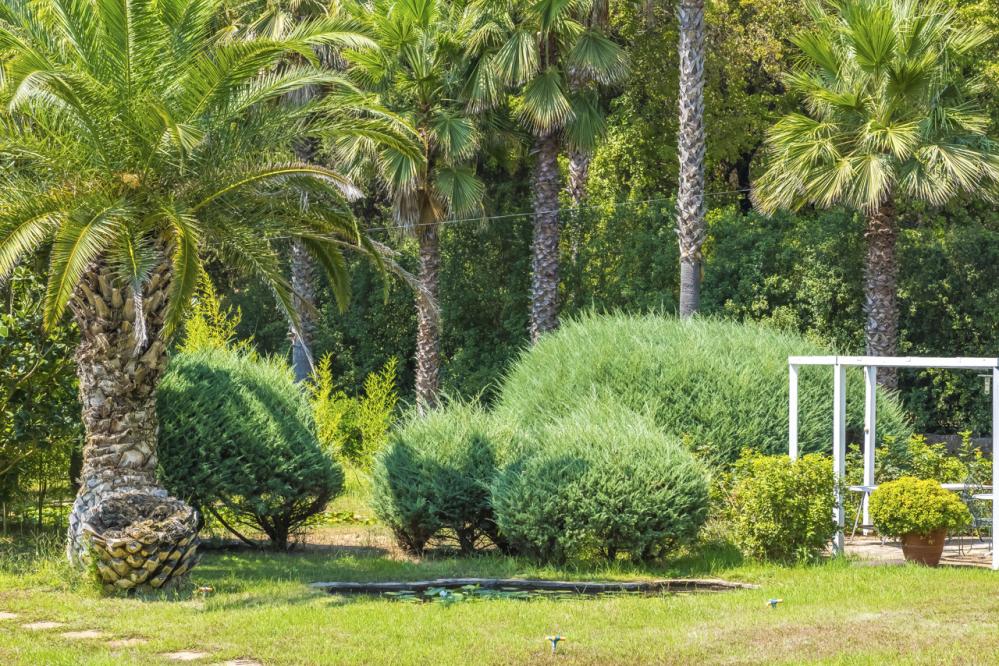 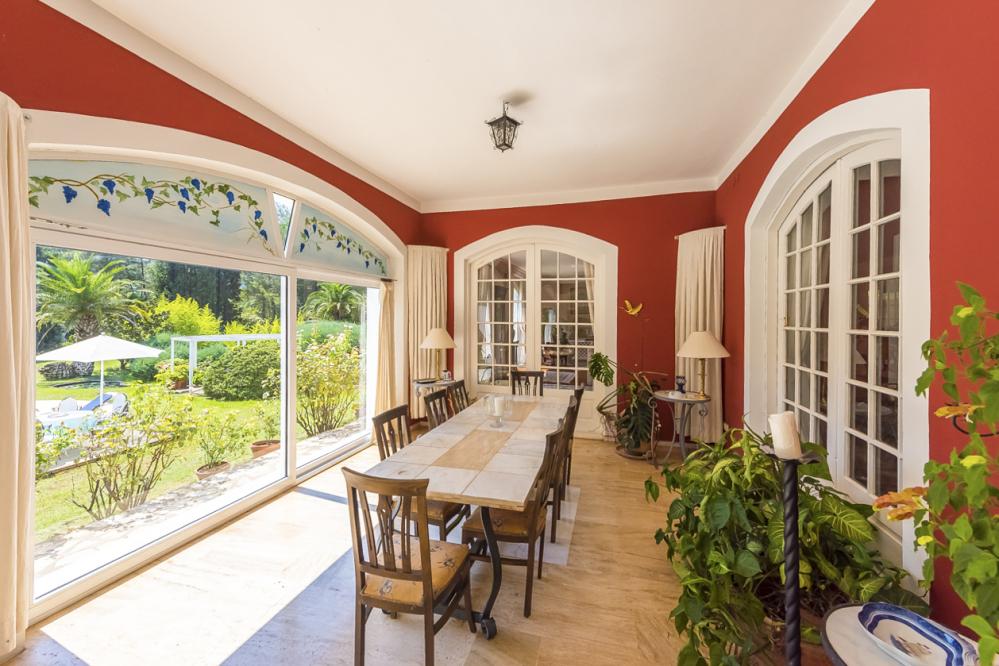 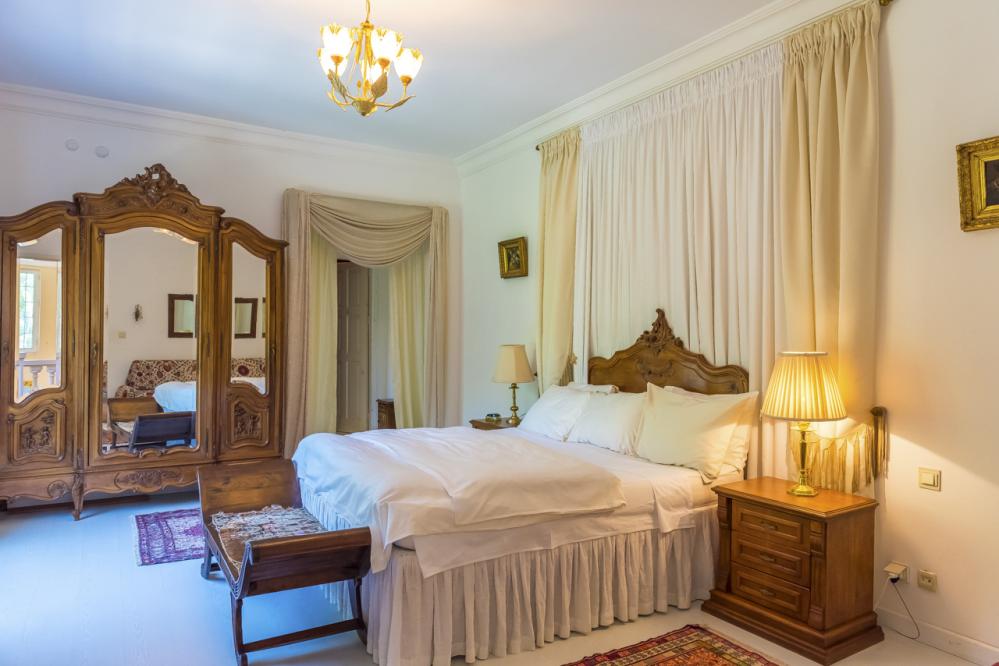 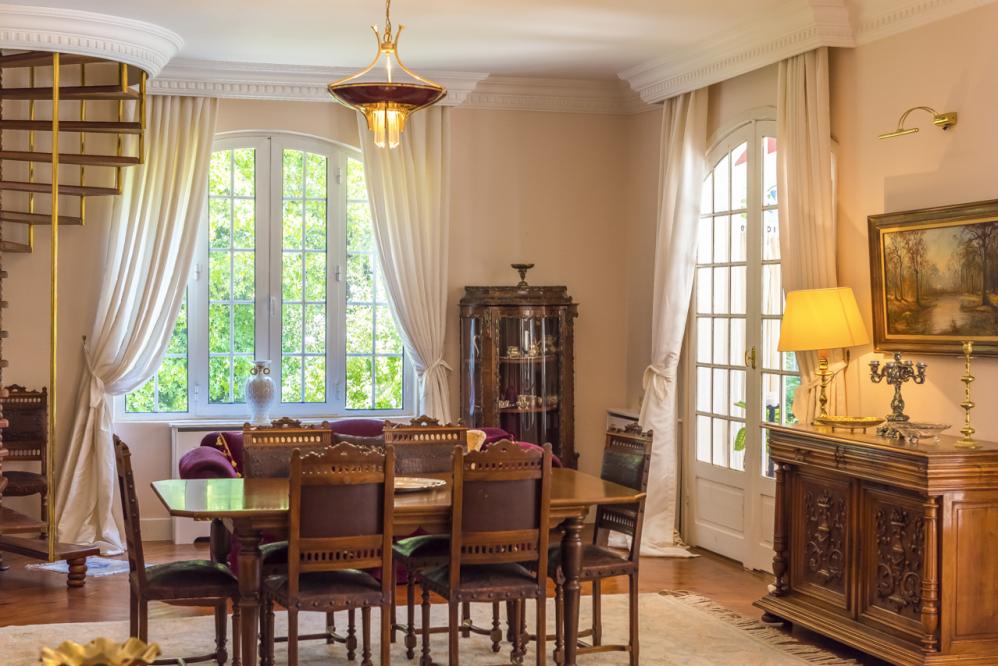 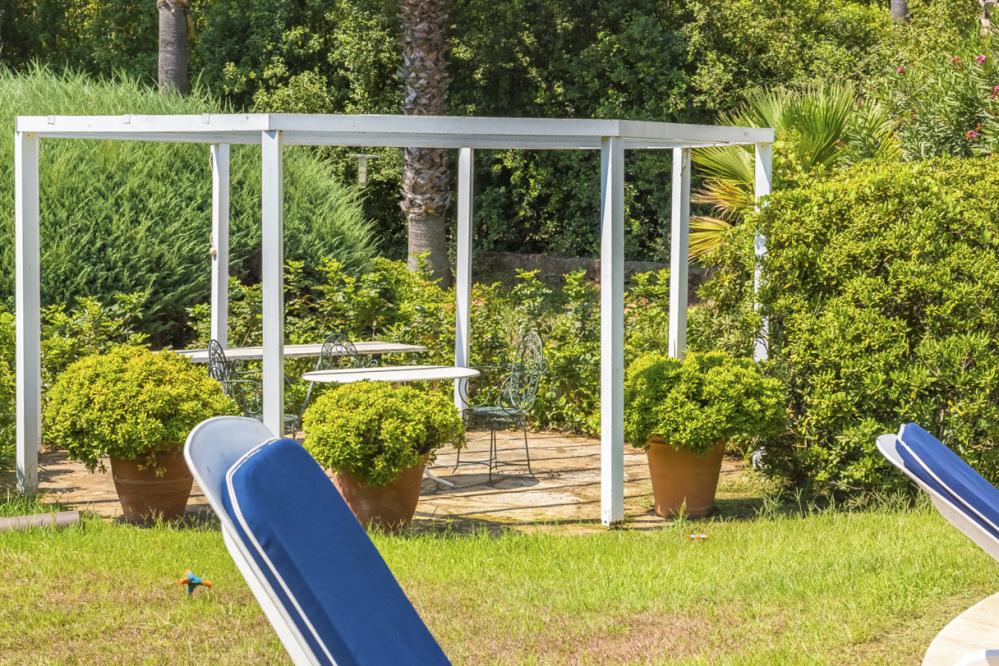 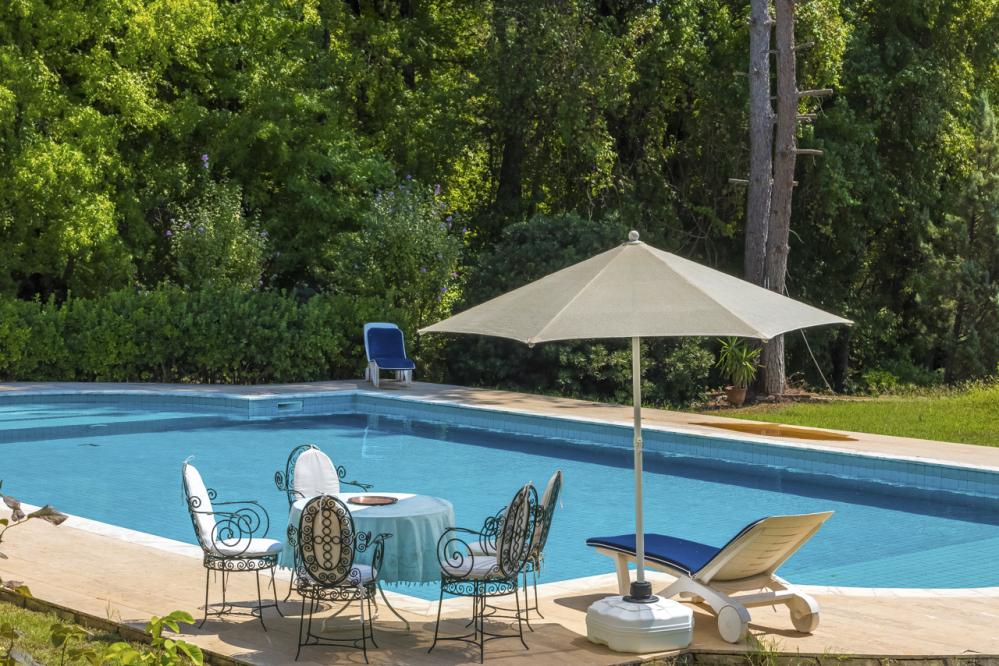 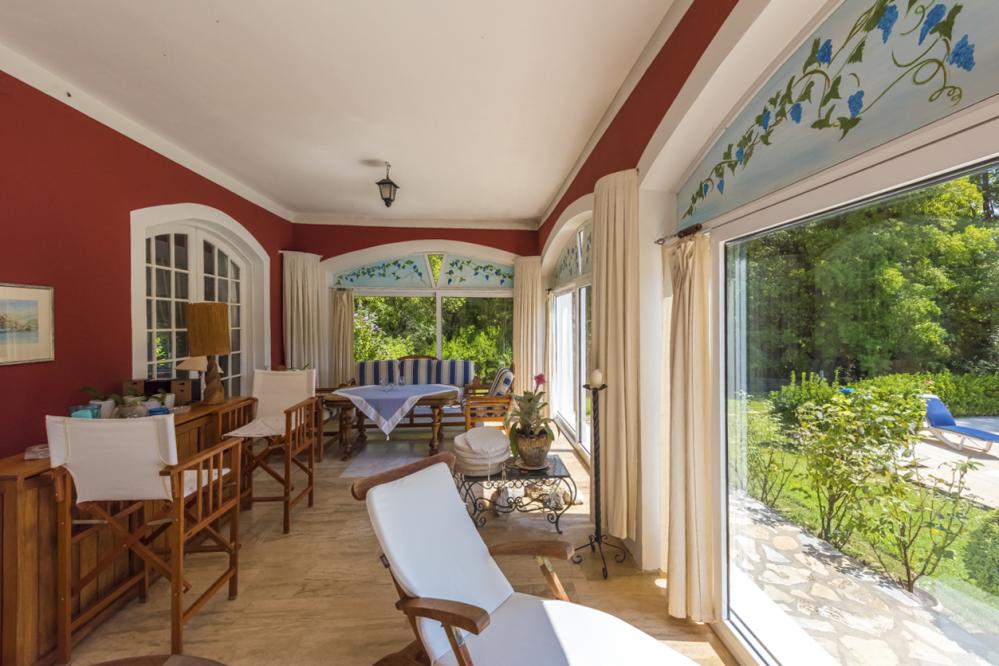 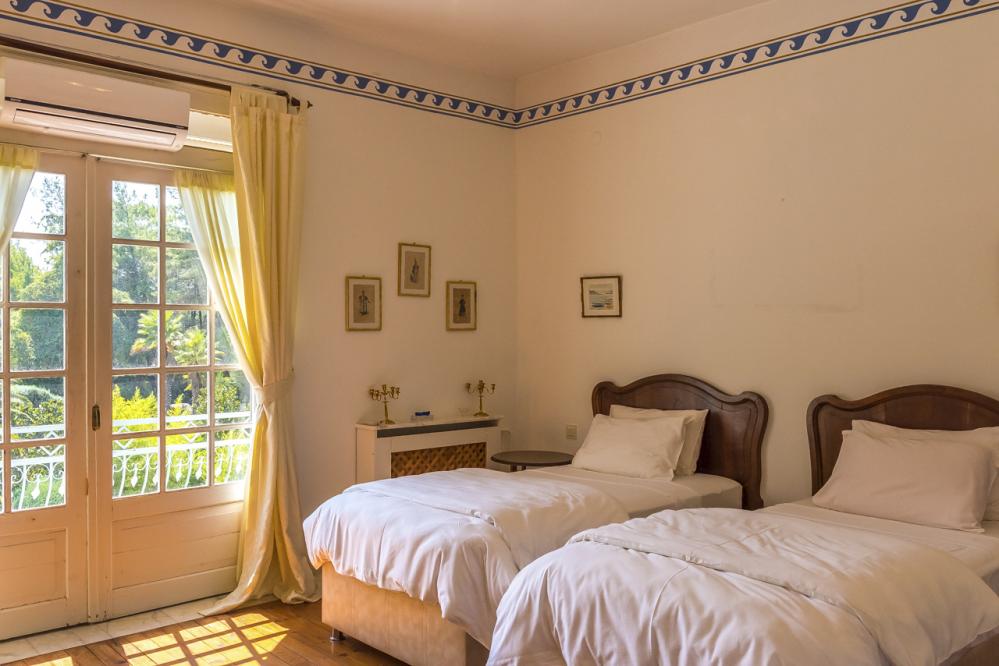 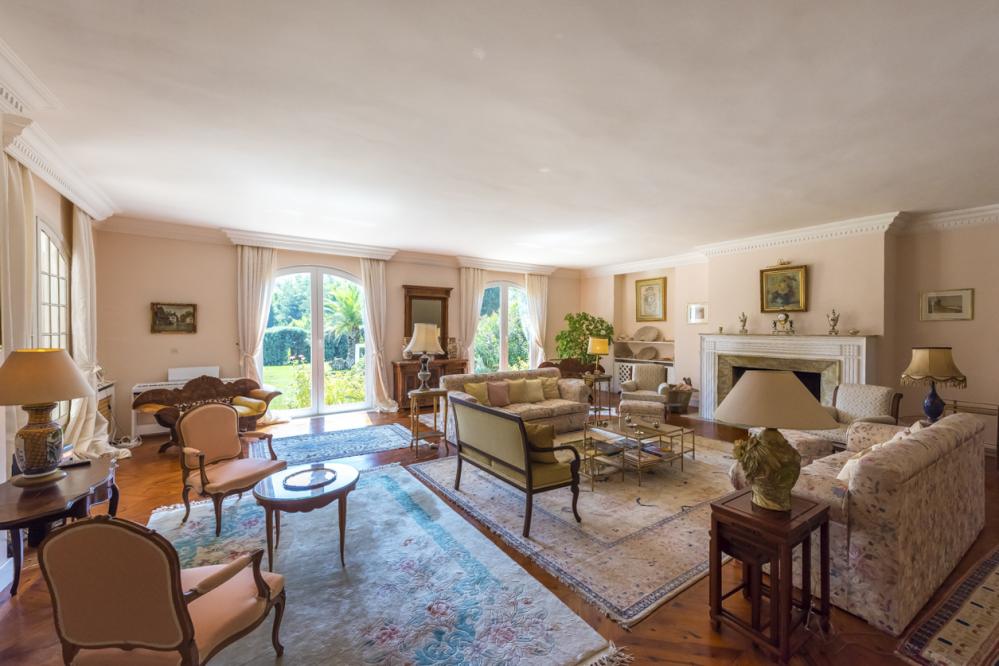 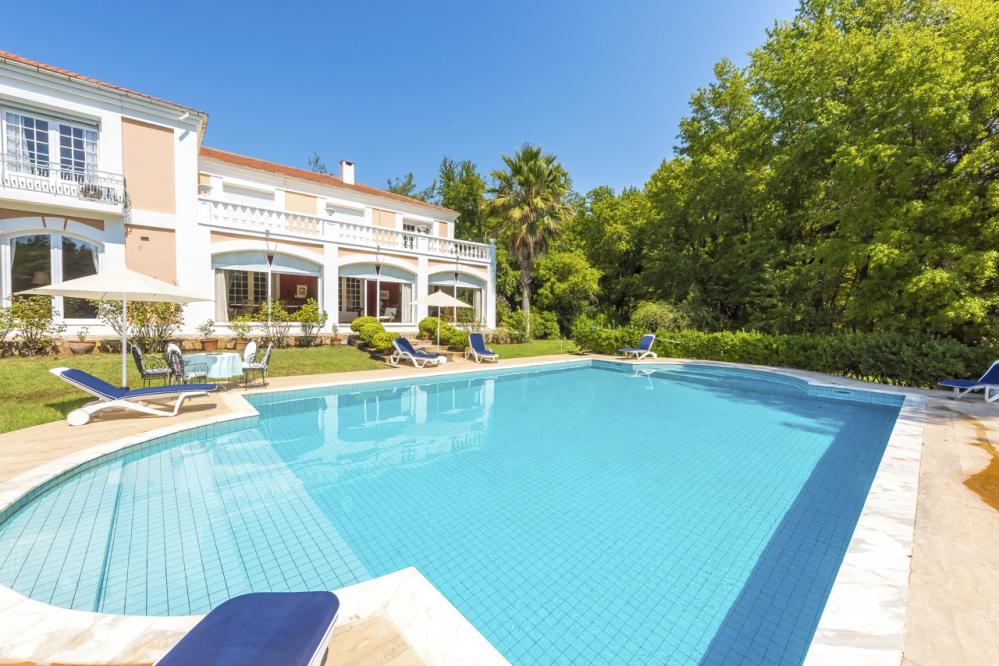 Villa Iznik is a brilliant grandiose home surrounded by imposing palm trees and has a sizeable swimming pool as its central feature. This home is perfect for th...

Villa Iznik is a brilliant grandiose home surrounded by imposing palm trees and has a sizeable swimming pool as its central feature. This home is perfect for those seeking to bask in luxury while getting acquainted with the mesmerising city of Marmaris. Immersed in bright greenery, you won't have to venture further than your back garden to enjoy the brilliant nature that Turkey has to offer.

Outside, sun loungers are spread around the pool and provide an ideal way to make the most of days under the sunshine. An immaculate green lawn is where you can put down a towel and utilise the wonderful Mediterranean climate and a lily pond located amongst the garden's various hedges and trees is a lovely place for some tranquil meditation as well as a charming poolside seating area. Guests can devour al fresco meals at this spot and enjoy drinks under the twinkling night sky. This will be especially enjoyed by those with an appreciation for nature and all of its beautiful offerings.

Inside, bold colours excellently capture the vivid spirit of the Turkish Riviera. Vibrant wall art is complemented by plush traditional furnishings and thick patterned rugs. A chandelier hanging beside the staircase is the perfect accessory to finish this effortlessly elegant home.

Adjacent to the dining area, you will find a pool table where games can be enjoyed during evenings spent inside. Throughout the home, you will discover numerous hand-picked ornaments adding unique character and creative flair to the home.

The Villa
Villa Iznik is a classicaly-styled villa, and it carries its charm and unique features across all the rooms, also featuring all modern appliances, including air-conditioning throughout the property. There are 3 bedrooms, 3 bathrooms and it can accommodate up to 6 people

Marmaris is a popular nearby beach boasting glistening blue waters and soft sand. The large size of ...

Marmaris is a popular nearby beach boasting glistening blue waters and soft sand. The large size of the beach means even when it gets busy tranquillity can easily be found. The beach benefits from views over the rocky tree-covered mountains and distant horizon.

There are many watersports available at Marmaris making it a favourite amongst travellers from the world over. Jet skiing, paragliding, snorkelling and riding a pedalo are all wonderful ways to discover the pristine Mediterranean waters. The beach possesses a selection of bars serving tantalising local cuisines so it'll be easy to spend the whole day here. You'll be able to seat yourself on one of the venue's sun loungers and have food and drinks delivered to you straight on the sands - some of the bars even offer a massage service!

If Turkish history is something that intrigues you, you must get down to the ancient city of Amos. The ruins are both inspiring and fascinating and will leave you pondering on how much work it took to build such magnificent structures that have pretty much stood the test of time.

From the ruins, which are accessible via a half an hour uphill walk, you will be able to see an amphitheatre, the ancient tombs and various stone walls. You'll most likely need a few hours to roam around this bygone world that amazingly still stands today.

The South West coast of Turkey offers the perfect climate for your holiday, boasting over 280 dry days a year and an average June temperature of 28 degrees Celsius in this area, with sea temperatures of 23 deegress celsius.  For keen walkers the paths of the Carian way will take you around the area.

Sat on the site of the Carian city of Physkos, Marmaris started welcoming European tourists in the 1980’s. At the time big hotels were what the travel agents were selling. The surrounding areas remained unspoilt and in recent years villas have popped up in less touristic areas. Marmaris still has a picturesque vista and the areas around the harbour, Netsel Marina and the castle are worth a visit. The castle was reconstructed by Suleyman the Magnificent during his expedition against Rhodes and houses a small museum. You couldn’t find better places to try an authentic Doner Kebab than some of the restaurants behind the bazaar, or for a more sophisticated version go to the Baris Ustu Kebabci in the Netsel Marina.

The Bozburun Peninsula represents the real hidden Turkey. In recent years wealthier Turks have headed to these parts to enjoy the thyme-scented air that is said to be ultra-healthy due to being high in oxygen as a result of the trees and proximity to the sea Throughout the peninsula villagers live as their ancestors did a century ago, tilling the land of a small holding, keeping bees or working in ancient trades handed down through generations. The women work hard to keep house and land. Every village has a teahouse where you’ll see the men making business over a game of Tavla (backgammon), slowly drinking endless cups of crystal clear black Cay (tea), drunk out of tulip-shaped glasses. The peninsula has loads of lovely restaurants, simple but delicious food. Enjoy fish in Selimiye; choose mezes from the kitchen and wash it all down with a glass of Lion’s Milk, the slang for Turkish Raki, an aniseed spirit that becomes white when water is added.

Travelling around the peninsula, there’s Orhaniye where you can walk the sand spit, Turgut where you can see the ancient trade of carpet weaving and visit the waterfall to cool off, especially if you purchased a carpet. Sogut is a hidden gem, and where a long seafood lunch is the way to go. There is a bee ‘museum’ in Osmaniye which pays homage to the local production of pine honey. Turunc, Amos and Kumlubuk sit on the southeastern coast of the peninsula. Kumlubuk has a sweeping beach, and a sandy shingle, water-sports and a few restaurants. Amos has a smaller pebble beach and a popular restaurant selling a range of Turkish favourites. Turunc is more of a resort, with a few streets behind the beach, plenty of eateries, shops and bars. Give it a little time as it is somewhere people fall in love with. Further around is Icmeler, which merges into the bigger Marmaris.

The villa has an extensive garden area with plenty of space for children to run and play around.

The villa has an extensive garden area with plenty of space for children to run and play around.

Dalyan Nehri is a well-known river located in Marmaris. Many take a boat trip along Dalyan Nehri to the Turtle Beach otherwise known as 'Careta-Careta.' The beach is famed for its Loggerhead turtle population that kids will love watching go about their day. The entire trip makes for a truly magical and memorable experience so have your cameras at the ready!

Travelling to Turkey
All British (and most other nationalities) citizens require a full 10 year passport with at least 6 months validity to enter Turkey. UK passport holders are exempt from visa for tourist visits of up to 90 days within 180 days starting from the first entry date. For all other passports please visit the Turkish Government Website or the Turkish Consulate for details of whether you require a visa or not.

Whilst in Turkey local regulations require you keep your passport and a printed copy of your e-visa with you at all times. 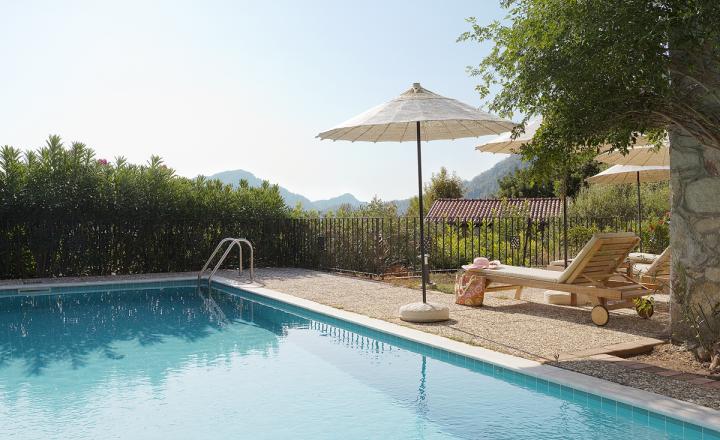 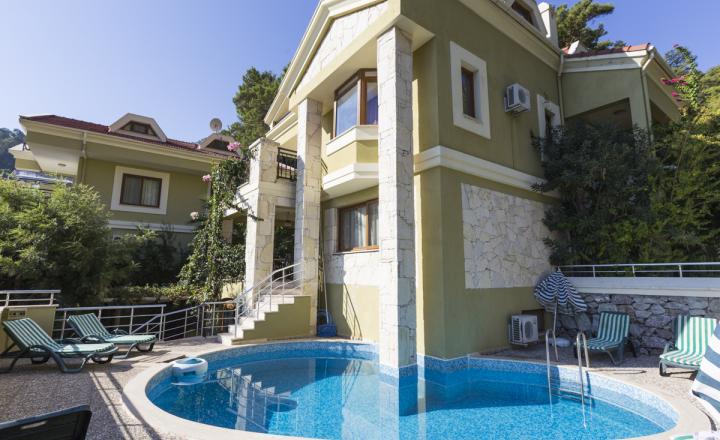 Ask a question about Villa Iznik