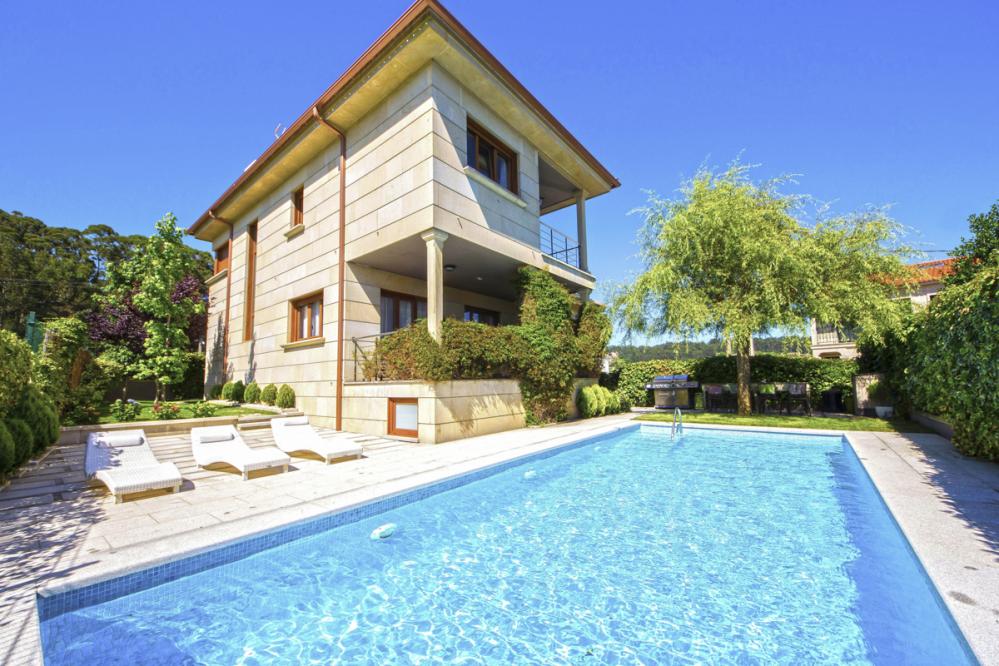 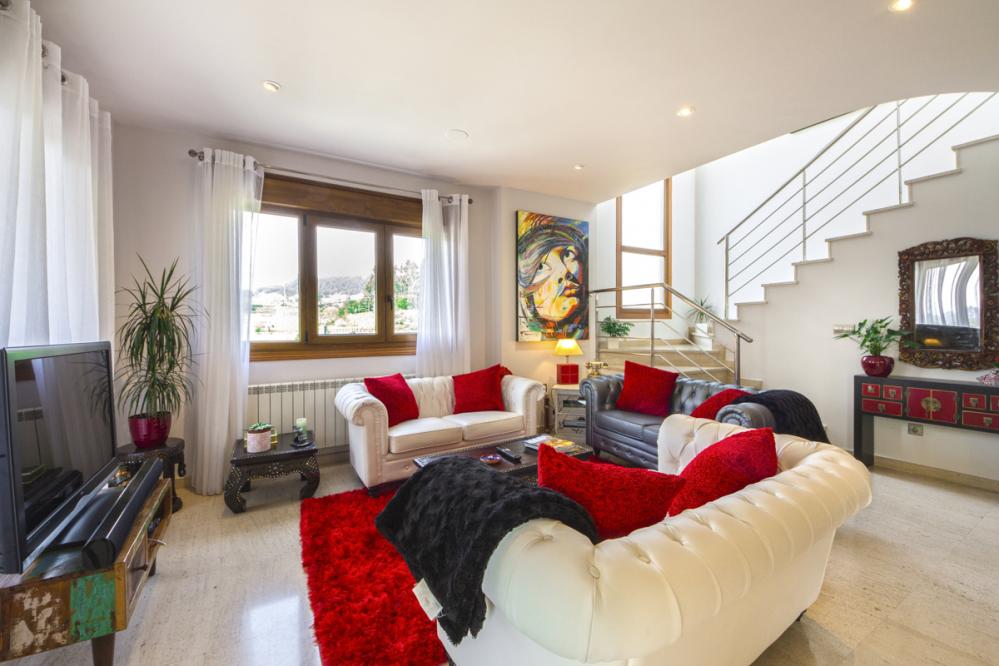 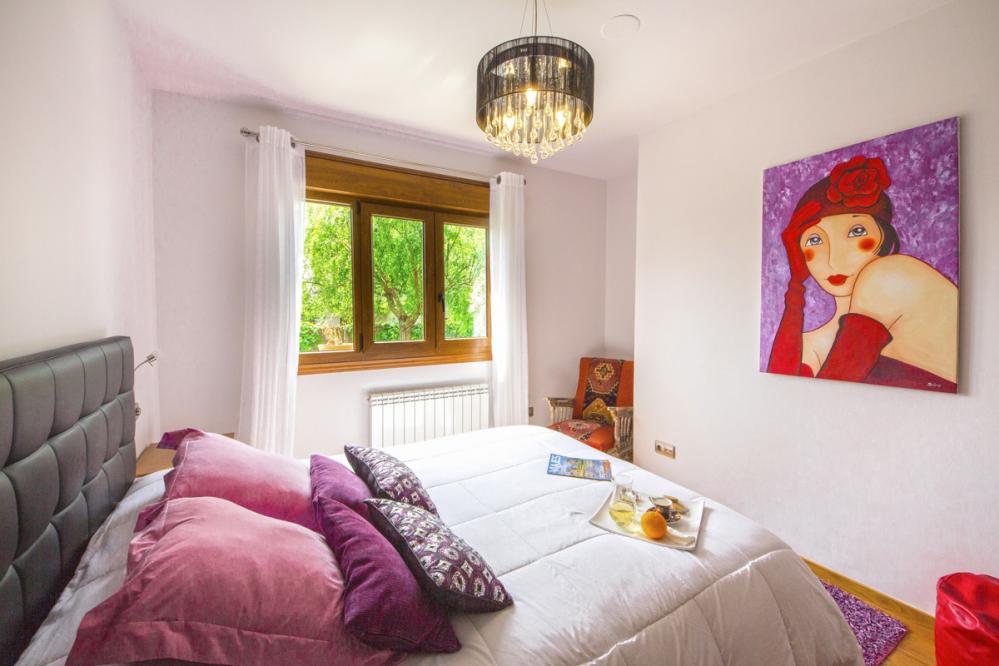 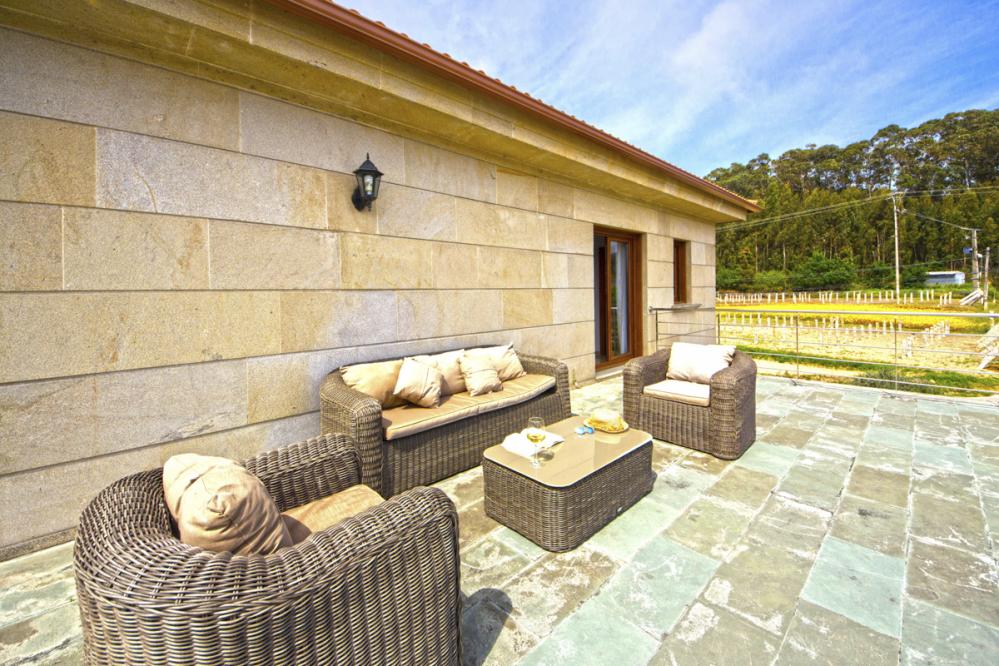 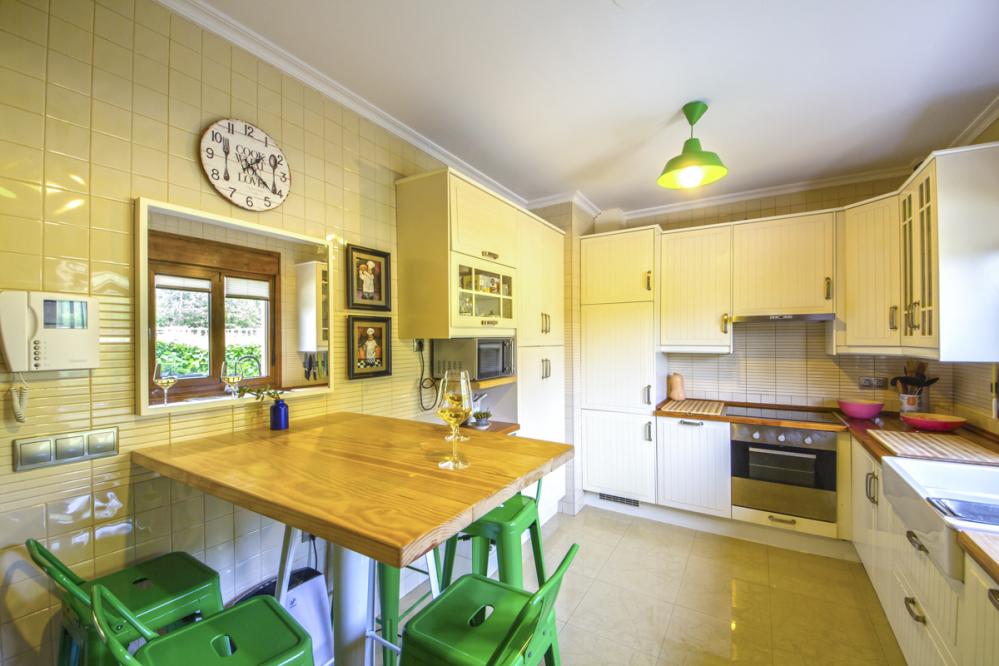 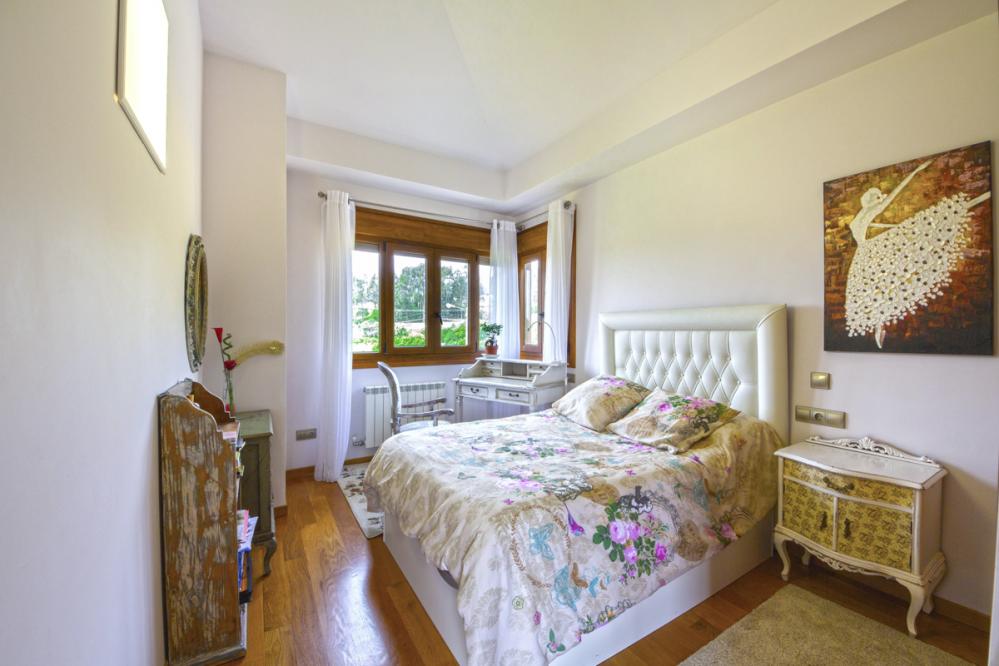 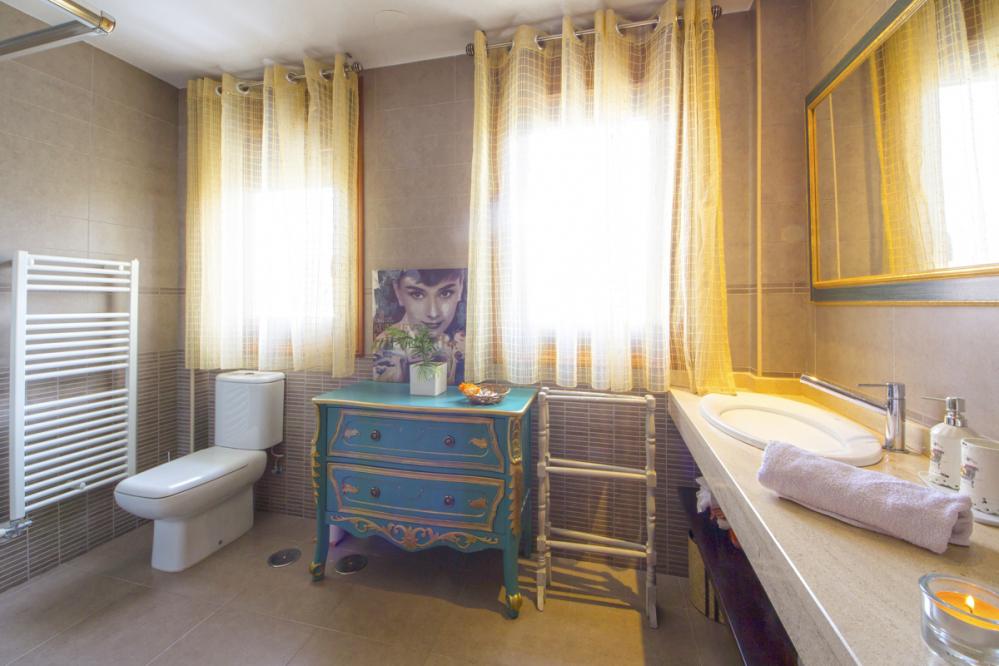 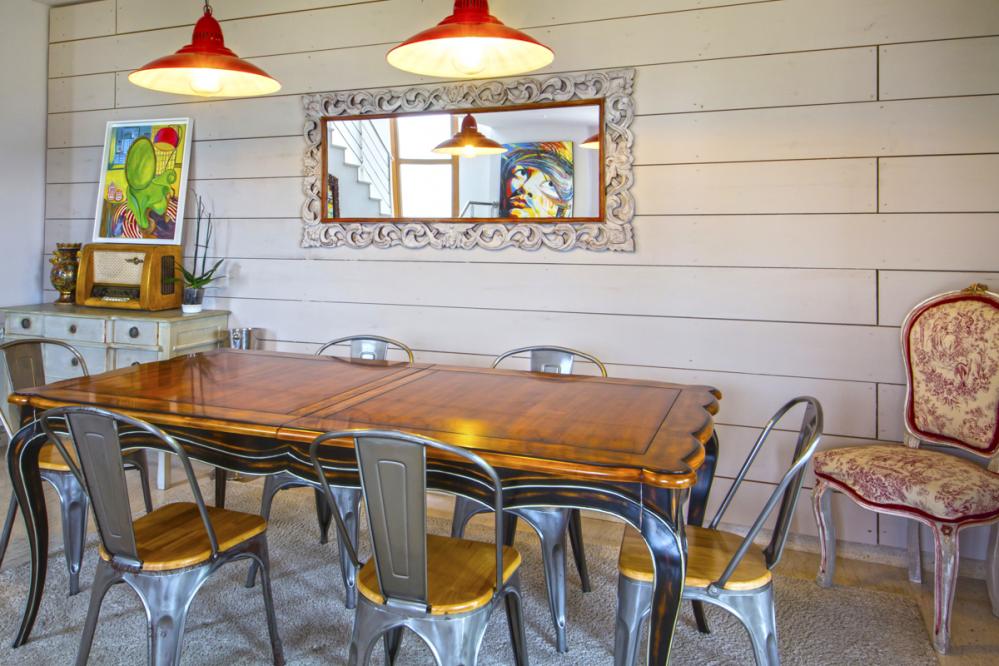 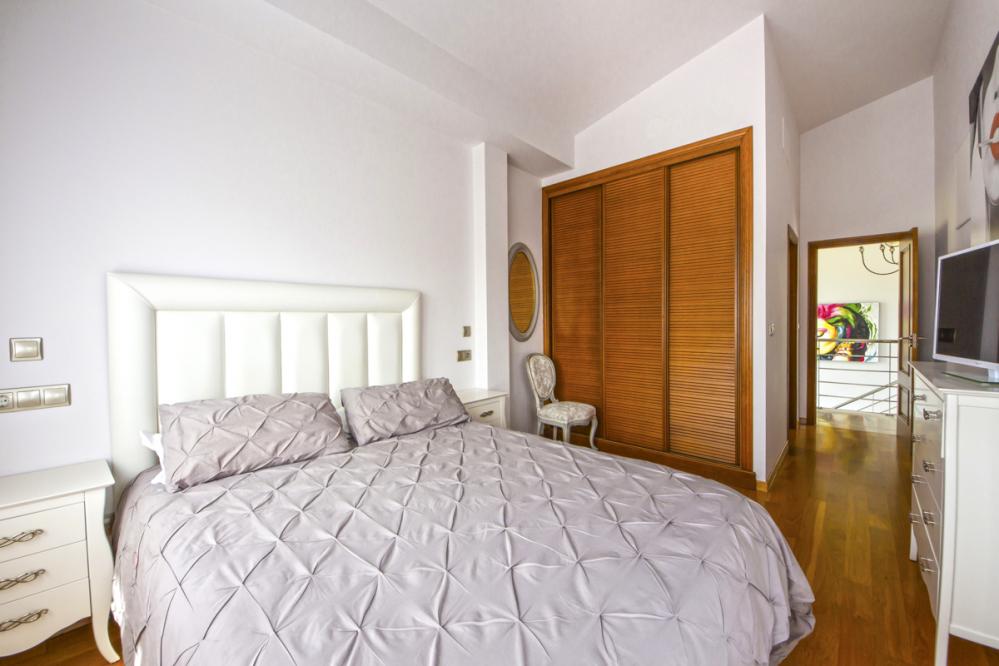 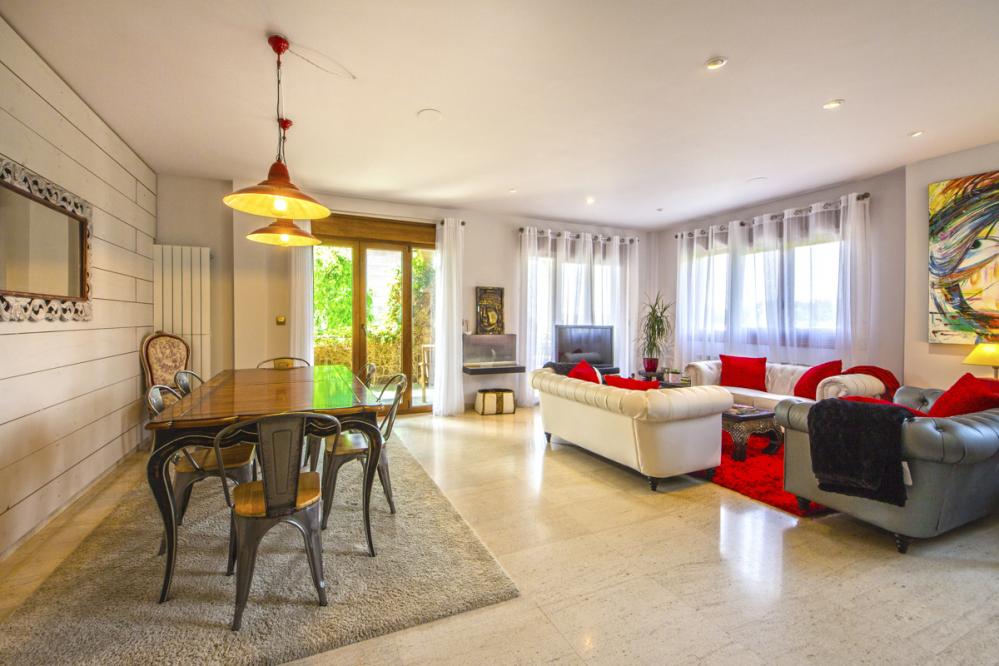 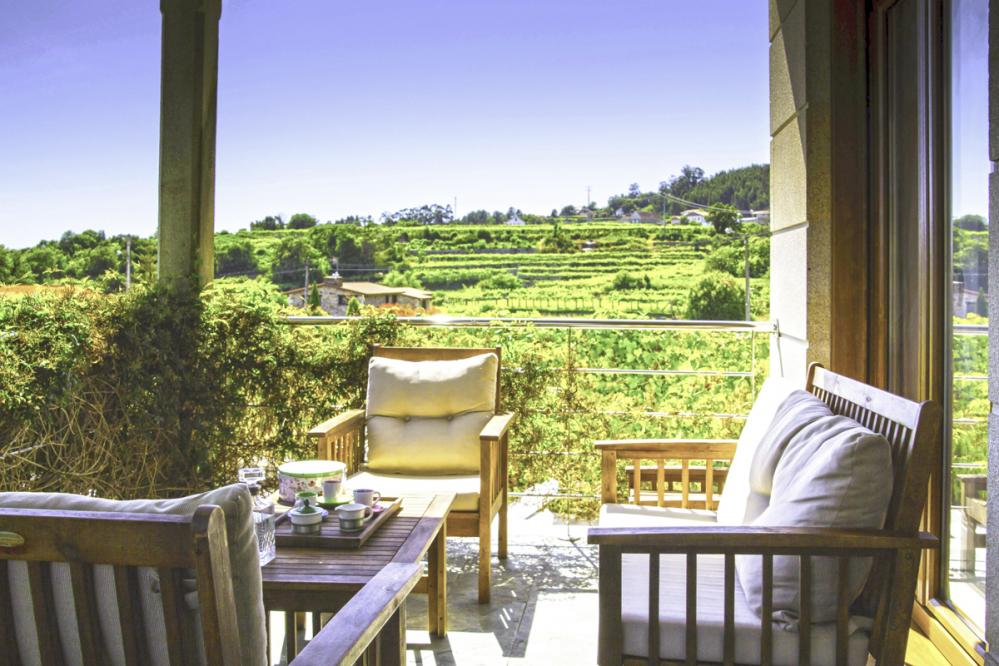 Just a stroll from the sea and the idyllic Dorron valley, Casa Pontevedra – a four-bedroom villa in Pontevedra, Galicia – combines rural surrounds with mode...

Just a stroll from the sea and the idyllic Dorron valley, Casa Pontevedra – a four-bedroom villa in Pontevedra, Galicia – combines rural surrounds with modern, family-friendly facilities to create a fun and relaxing Spanish holiday escape. The villa flaunts fantastic views of its beautiful natural setting, looking out towards the sandy shoreline and the rugged coast below.

With its whitewashed exterior and mid-tone wood shutters, Casa Pontevedra’s décor is an elegant mix of classic and contemporary style. There’s a private outdoor pool, lined with sun loungers, and a garden terrace – with plenty of places for you sit and relax in the sun or the shade. With an outdoor dining area – that’s shaded by a sweeping willow tree – you can enjoy eating al fresco while soaking up the peaceful surrounds, too. Top tip – you can pick up fresh produce, including local seafood, from the nearby town of Sanxenxo. Then, cook up a storm on the villa’s outdoor barbeque.

Inside, the rooms are all bright and welcoming. You’ll find a large kitchen, equipped with modern facilities like an oven and microwave, too, – so, self-catering here is a breeze. Plus, there’s a spacious, open-plan living and dining area. Bright cushions on the sofas and artwork add pops of colour for a fun, and homely, feel. The bedrooms are all comfortable double rooms and there are three bathrooms, too – that includes the en-suites in two of the bedrooms.

When you’re not relaxing on a cushioned chair on one of the terraces – there are three to choose from – head to Sanxenxo Beach with its warm waters and sun-kissed sands. The centre of Sanxenxo is also a short two-minute drive away, with its local shops and restaurants.  Thanks to its quiet setting near the Dorron valley, Casa Pontevedra is an excellent choice not only for families with children but also for those who want to explore the natural beauty of this idyllic part of the Spain.

Casa Pontevedra is a 4-bedroom villa, situated within the Dorrón Valley. Being within Sanxenxo, you and your guests have luxury of being close to several beaches.

Casa Pontevedra overlooks the beautiful Dorron valley, in the peaceful Spanish town of Sanzenxo in P...

Casa Pontevedra overlooks the beautiful Dorron valley, in the peaceful Spanish town of Sanzenxo in Pontevedra, Galicia. This relatively untouched gem is different to other Spanish hotspots like Barcelona and the Costas, thanks to its green valleys, rugged mountains and wild beaches. Think bagpipes playing and baroque cathedrals, too – so, you might feel more like you’re in Scotland than Spain. Top places to visit include Santiago de Compostela – the capital of Galicia.

Thanks to the villa’s beachside location, there’s plenty of opportunities to get involved with watersports like swimming, snorkelling and sea kayaking. Sanxenxo Beach has soft sands and calm waters. Near to the Dorron Valley too, you can enjoy beautiful coastal or rural walks.

History buff? Head to nearby Pontevedra – known for its well-preserved old town and Gothic Santa María la Mayor Basilica. You can snap pictures of the historic churches and charming squares here, before sampling local cuisine in one of the bars and restaurants. Fresh seafood like octopus, or other Galician specialties like Empanada Gallega – a large pie usually filled with meat – are on the menu, and are usually washed down with a glass of the region’s famous Albarino wine.

More worth-exploring cities include Vilanova de Cerveira and Caminha. You could also make tracks for Vigo, Porto or Tui. The latter is a Romanesque and gothic village that’s steeped in history. Take in the cathedral and churches there, before heading to the mountain of Aloia nearby. If you climb to the top, you’ll be rewarded with views of Vigo estuary and the Louro valley below.

Like many parts of Spain, Galicia has its very own identity that has remained intact through its regional dialect and distinguishing culture. Although Galicia is recognised for its holy traditions, we urge budding tourists to also consider its astonishing green countryside & rivers and its UNESCO World Heritage sites. Occasionally you may even hear the gentle tootling of bagpipes, known locally as the Galician Gaita, along this northern corner of the Iberian Peninsula.

You're likely to fly into Santiago de Compostela, which is the capital of Galicia and is probably best known for the Camino de Santiago pilgrimage and its route. Many of the travellers embark on this journey by foot and tend to be mesmerised by this fine city at the end of their trek. Casco Viejo, or the Old Town, is a good place to end or even start your holiday. This area of the city is blessed with markets, restaurants, bars and buildings from a bygone era. After exhausting yourself in the busyness of the city, take a day trip to Praia de Rodas. This small island, just off Vigo, has been noted as having some of the best beaches in the world. It has to be seen to be believed!

Galicia is divided into four key regions; A Coruña, Lugo, Ourense and our favourite – Pontevedra. A Galician proverb states that Pontevedra gives water to travellers. We firmly believe this to be true, as this particular part of Galicia has everything a traveller could need for an unforgettable experience and it almost feels like this City is constantly giving back. Whilst you holiday in Pontevedra you will realise that days are structured around mealtime. And why wouldn't they be? With some of the best seafood you will experience in Spain and the noteworthy Albariño wine, you may notice your jeans feeling a little tighter toward the end of your holiday. You will be glad to know that your waistline need not be a cause for concern though! Pontevedra is blessed with some of the best hiking trails, medieval monasteries, estuaries and valleys within Spain. Don't forget about the coastline either! Rarely you will you find so many empty beaches, so make the most of this privacy and just embrace the nature around you.

Galicia is still an unspoilt part of the world. It has everything a diverse group of friends & family need to have a glorious adventure.

Galicia is served by either Santiago de Compostela Airport, A Coruña Airport or Vigo Airport.

Thanks to its private garden and swimming pool, Casa Pontevedra is an ideal choice for families with...

Thanks to its private garden and swimming pool, Casa Pontevedra is an ideal choice for families with children. The villa’s only a 10-minute walk from the nearest sandy beach, where kids young and old can swim in the calm waters, and is also a two-minute drive from Sanxenxo town. Overlooking the beautiful Dorron valley, there are plenty of walking routes nearby, too.

For fun family day trips, you can head into Pontevedra and explore the historic old town and pretty churches. Or, make tracks for other sight-packed places like Tui. At the latter, you can climb to the top of the mountain of Aloia for wow-worthy views of the Louro valley below.

You could also visit Dunas de Corrubedo – a natural park with a big sand dune that kids can roll down to reach Playa do Vilar Beach. You could also hop on a boat to Illas Cies – a footprint-free group of islands off the coast of Vigo – where you can swim and scuba dive in the surrounding waters.

Ask a question about Casa Pontevedra