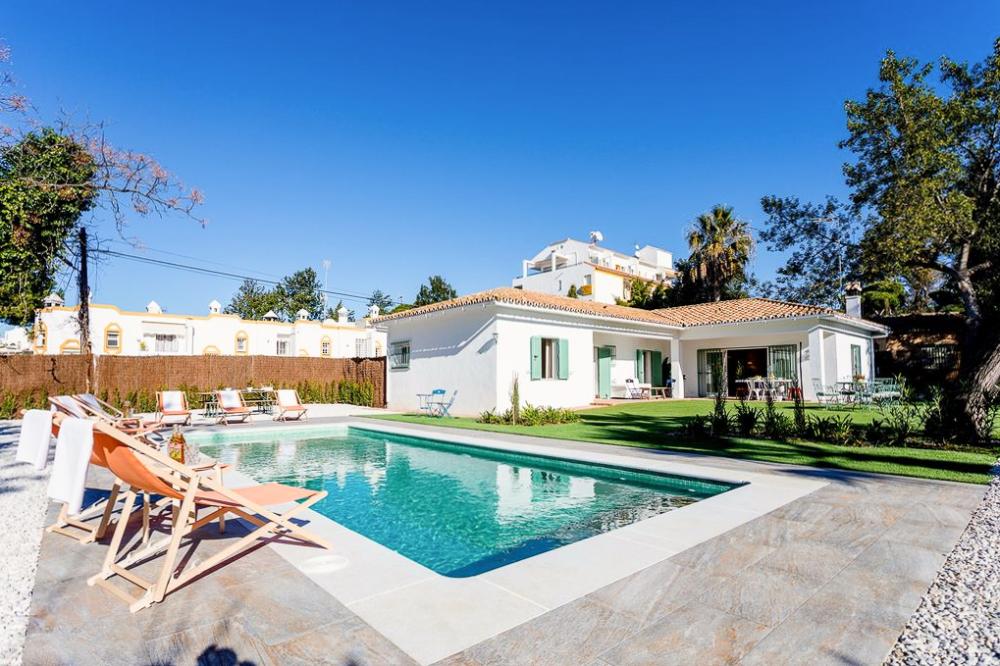 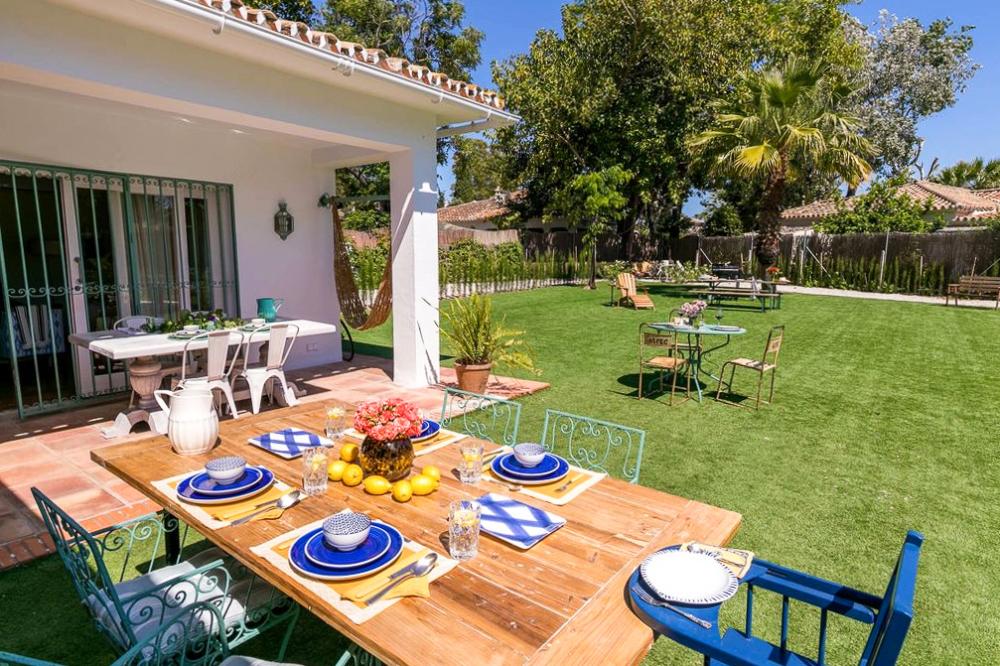 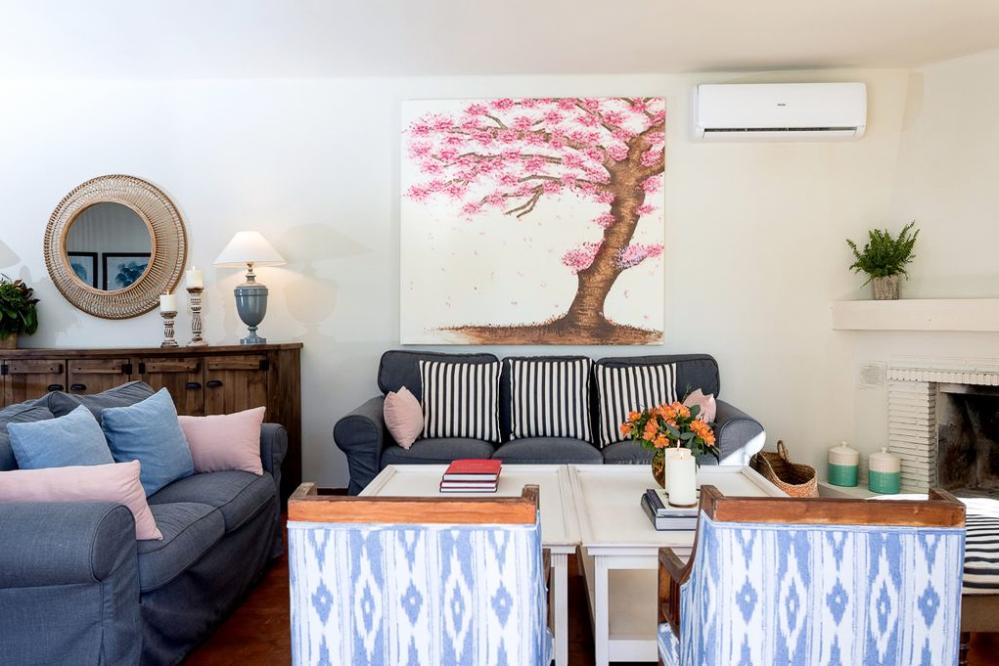 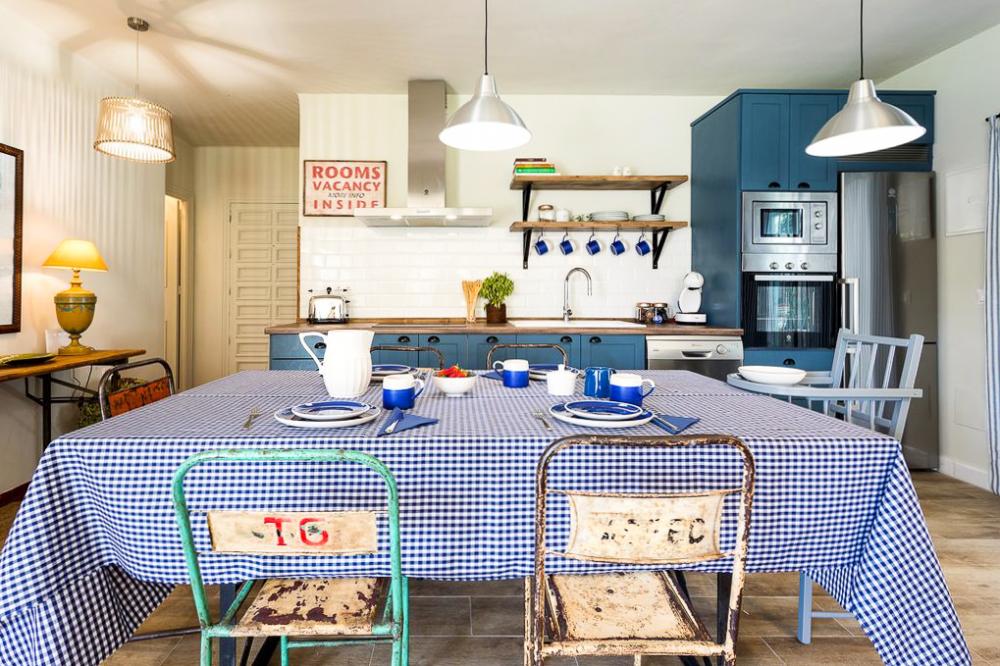 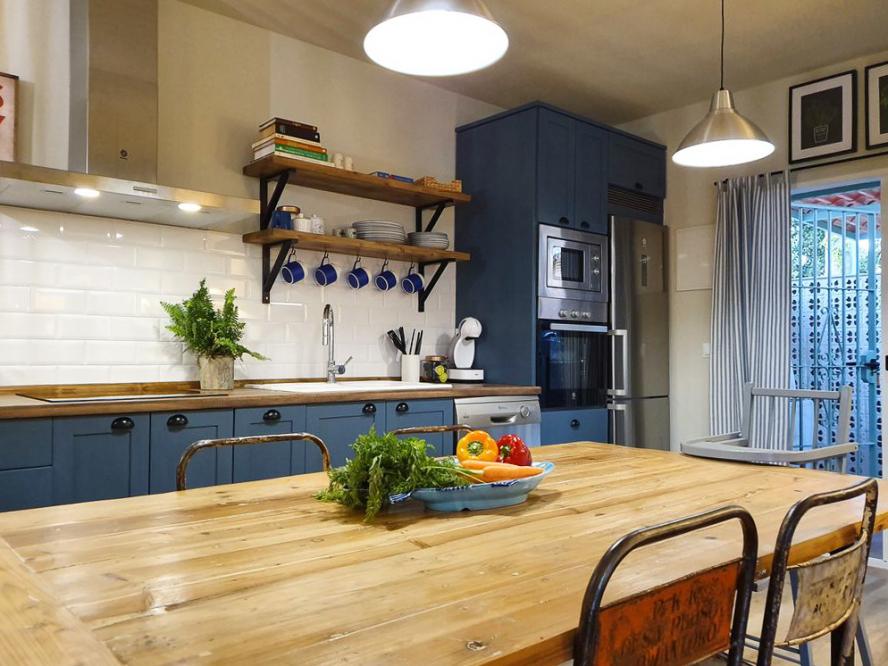 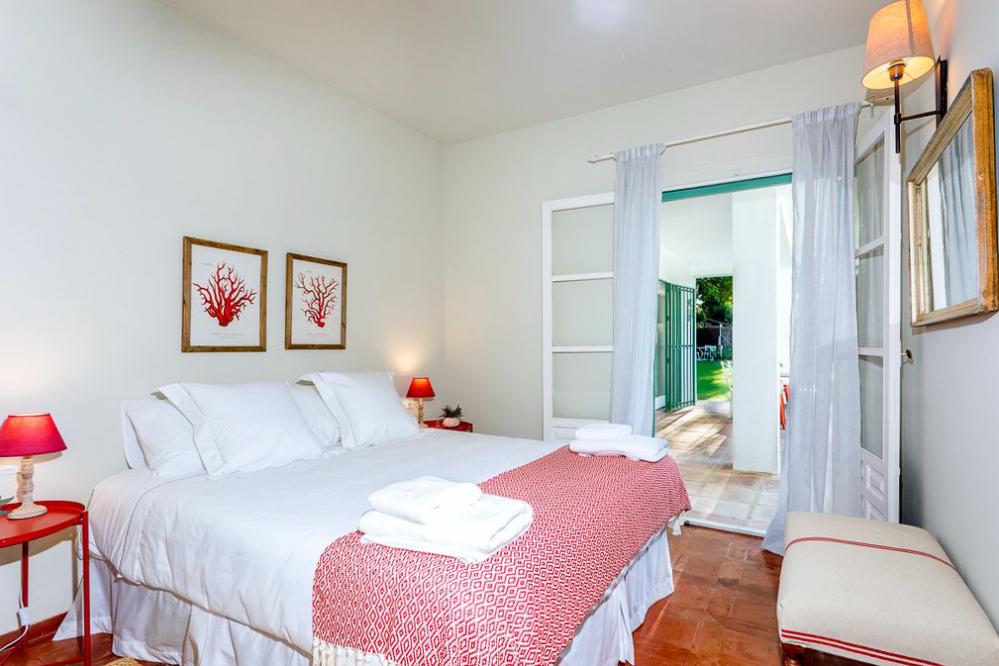 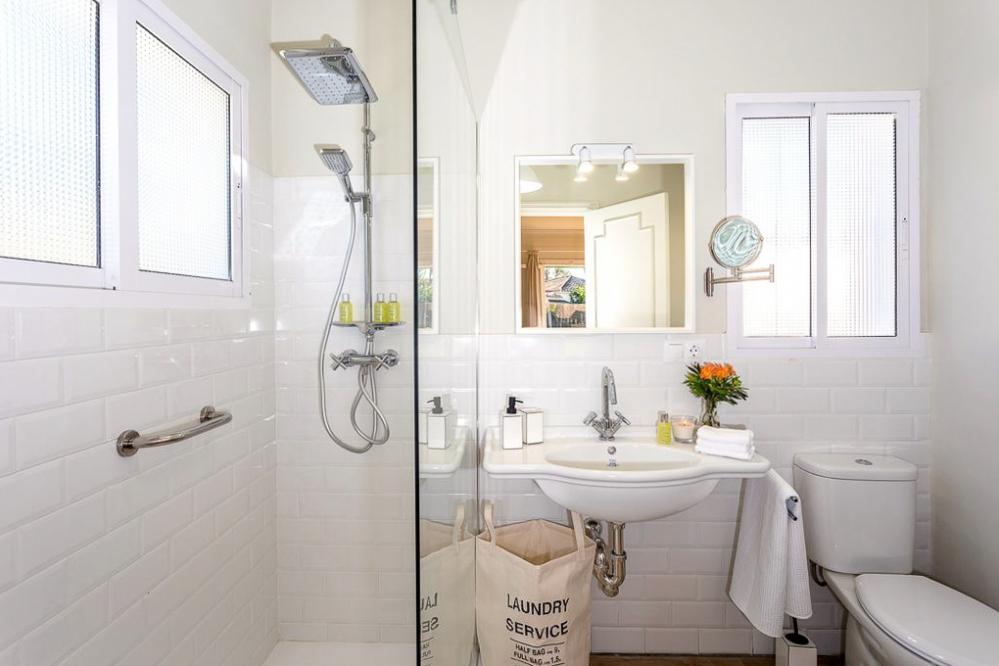 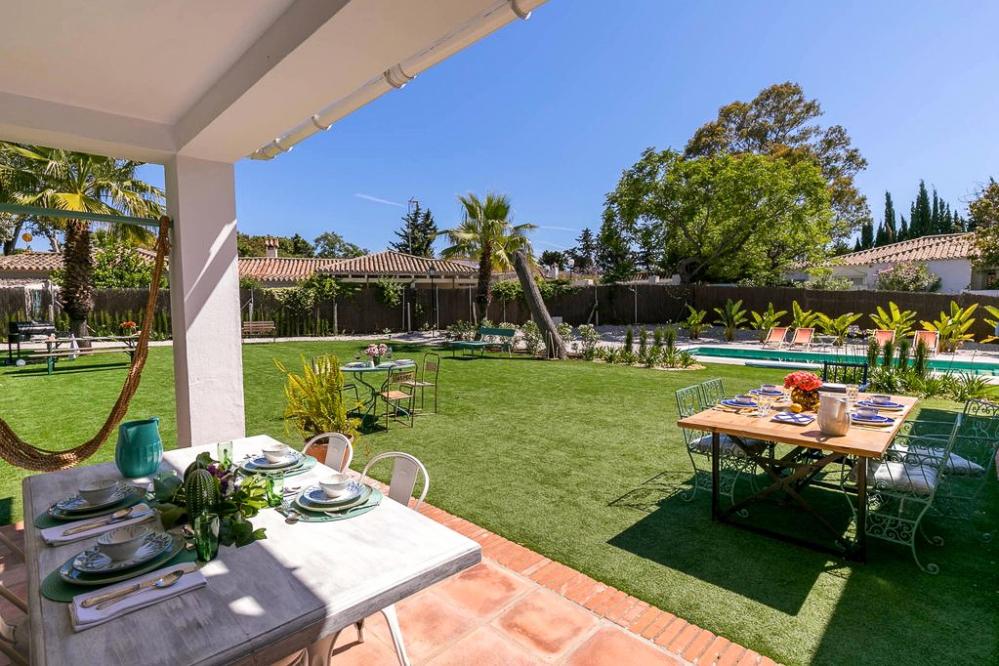 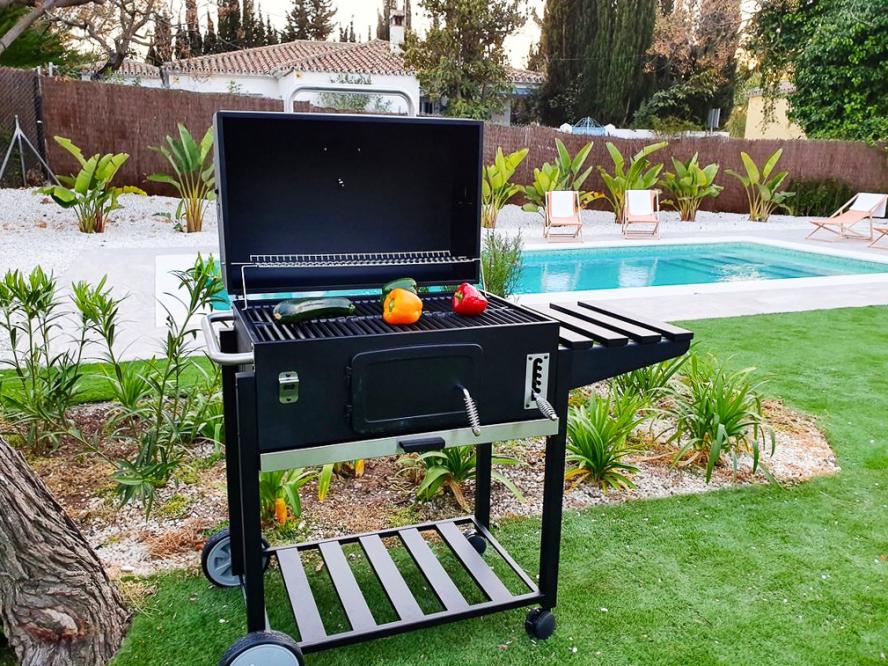 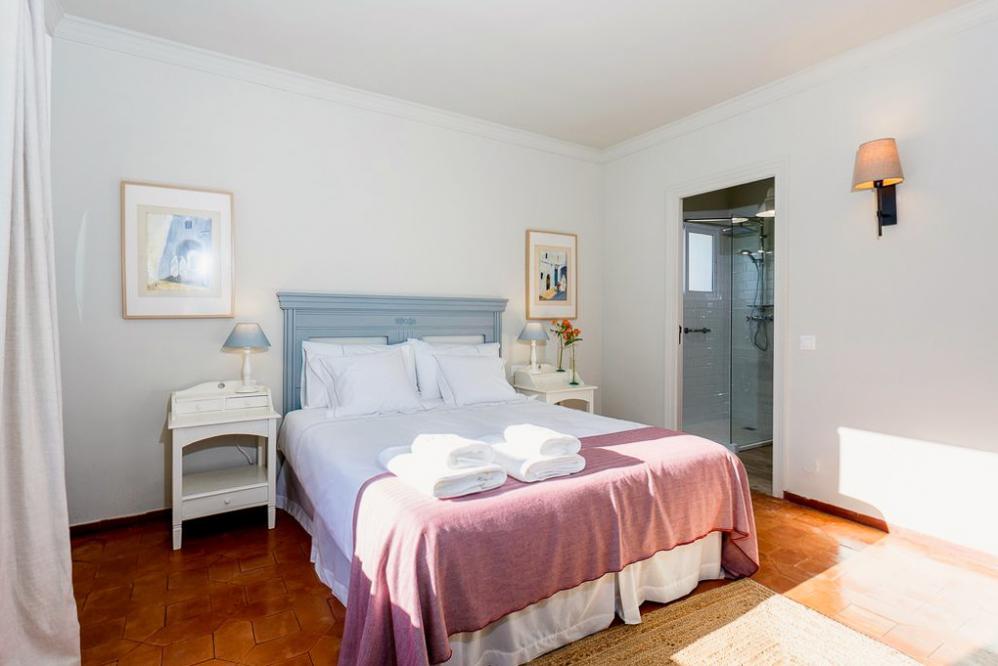 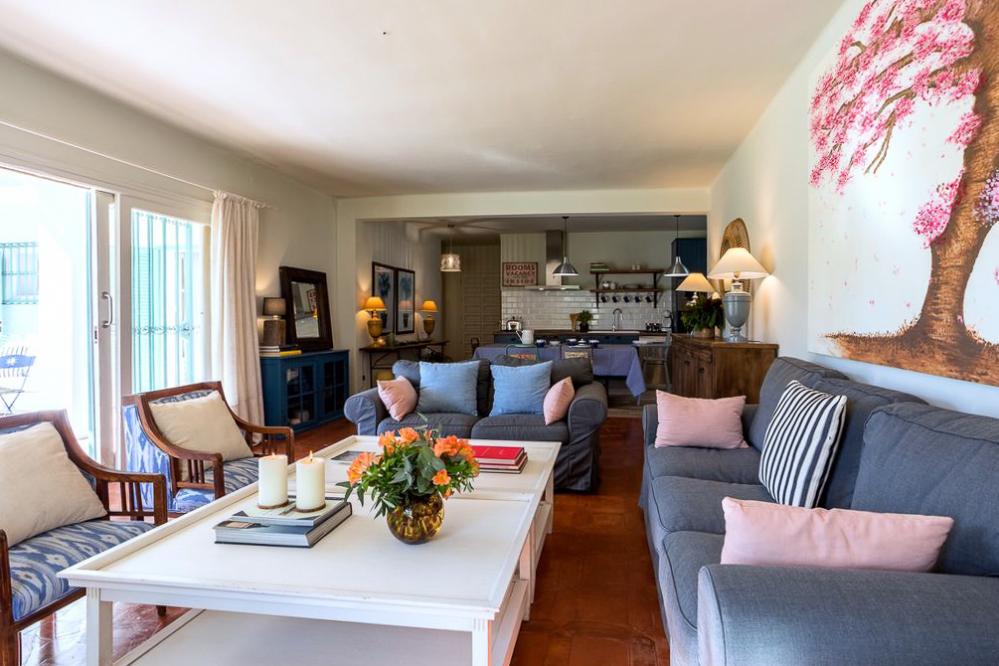 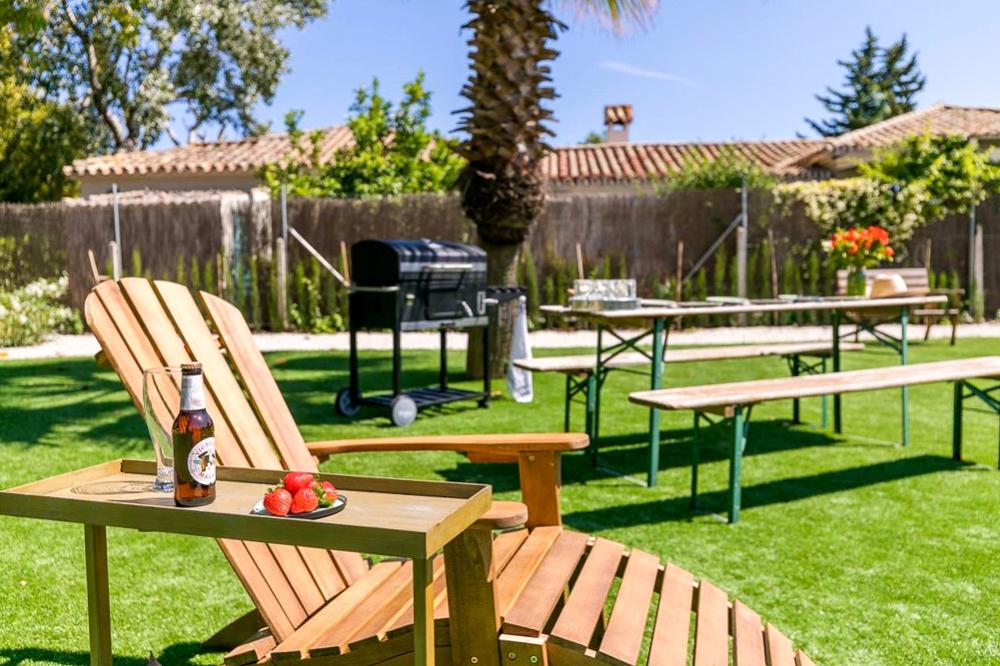 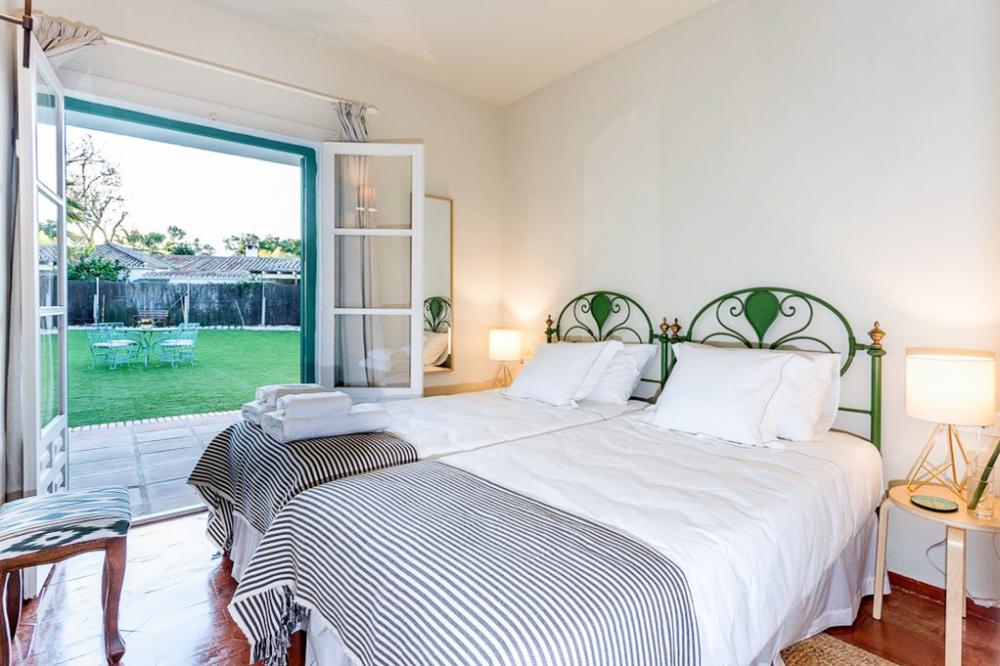 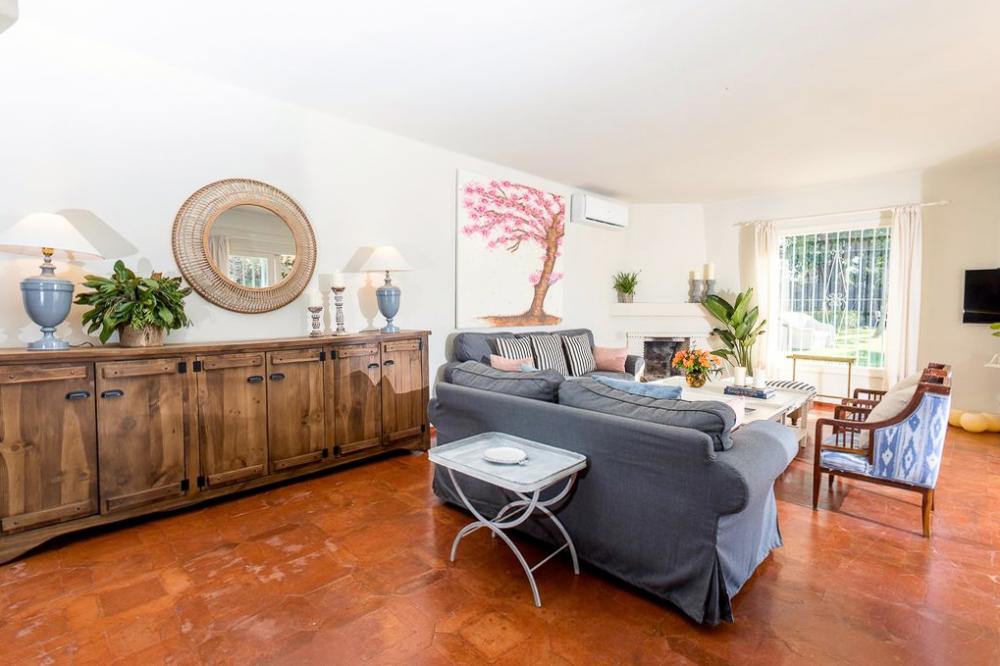 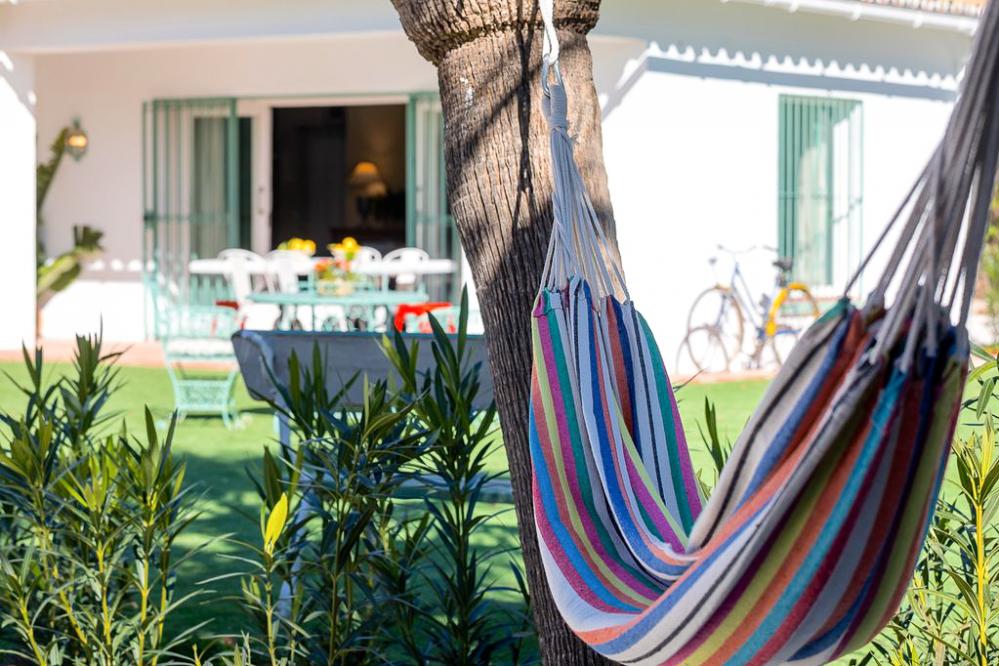 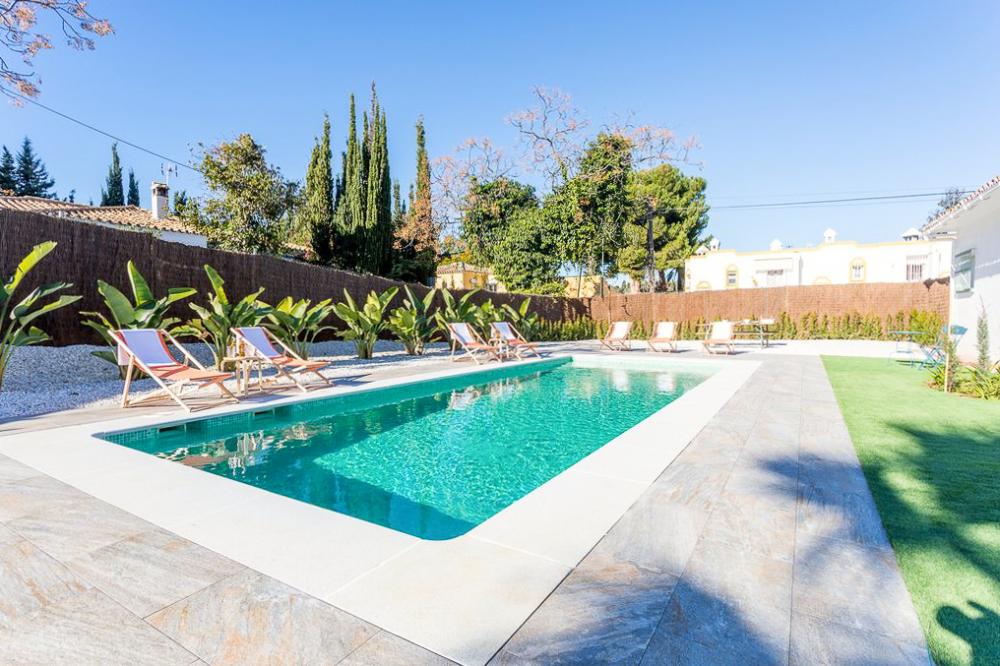 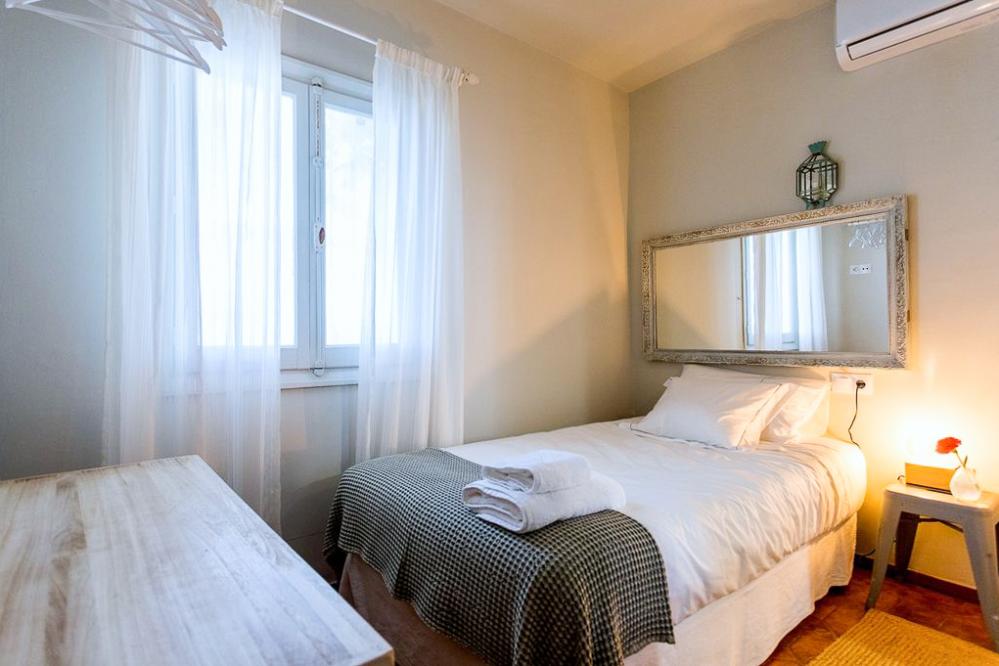 In a quiet corner of the leafy suburbs of Cabopino in East Marbella, Villa Mijas enjoys a wonderful array of stylish and modern facilities, all just a short wal...

In a quiet corner of the leafy suburbs of Cabopino in East Marbella, Villa Mijas enjoys a wonderful array of stylish and modern facilities, all just a short walk from the perfect coast and beaches!

The traditional Spanish style oozes through every detail, from the décor to the colours to the vintage furniture. In your wonderful living space two giant plush sofas invite you to pop your feet up and rest, looking out through an immense set of patio doors. There’s a fireplace to one side, and a charming wooden sideboard that stretches across the wall to the other. At the far end of the room your fantastic farmhouse style kitchen is brimming with character, yet thanks to a recent renovation it is thoroughly contemporary and has everything you could wish for to prep a delicious meal for the whole group to enjoy at this large dining table. Additions such as a juicer and a Dolce Gusto coffee machine promise you can enjoy your holiday with ease.

Choose from four magnificent bedrooms, including two doubles, a twin and a single room, all simply beautiful. Three of the four rooms even enjoy direct access to this exquisite garden, so whether you fancy a dip in the pool first-thing in the morning, or late night conversations under the stars, you’ll just be a second away from it all! Just like each room and the social spaces, each of the three accompanying bathrooms has its own unique character, with entirely different designs and styles in each but the same elegant charm.

And finally, head out into your 1000 square meters of enclosed and enchanting garden, where a huge lawn extends out from a mesmerisingly beautiful terrace with alfresco dining, casual seating and fabulous views all around. The jewel in the crown is nonetheless undoubtedly this enormous private pool, shimmering in the sun playing across its surface and inviting you to enjoy its refreshing depths! All around the pool are countless loungers where you can sunbathe and relax in comfort whilst enjoying the scenes of fun and contentment across the garden.

The Villa
Villa Mijas is a bright Spanish style villa filled with character and charm. There are 4 bedrooms and 3 bathrooms, and it can accommodate up to 7 guests.

Midway between Marbella and Fuengirola, Villa Mijas couldn’t be better placed for a holiday of var...

Midway between Marbella and Fuengirola, Villa Mijas couldn’t be better placed for a holiday of variety! Firstly, you’re less than half a mile from the sandy beaches of Playa de Artola and Cabo Pino, while the Old Town of Marbella is around 10 minutes away.

A bustling urban centre, a vibrant nightlife and an exciting calendar of events year-round promise a memorable holiday on this coastline. And for something a little more relaxing, take the coastal boardwalk which forms a part of the Malaga Coastal path towards Marbella!

Marbella, meanwhile, is a little bigger and busier, with a traditional and beautiful old town, and holds many Michelin starred restaurants and world-renowned beaches where one can soak up the sun and enjoy a cocktail at a beachfront bar! It has a very rich history, visible in the many ruins throughout the winding cobbled streets of its Old Town.

Malaga, the largest city on the Costa del Sol, is also nearby, and is historically and culturally incredibly rich, putting even more activities and amenities at your fingertips. As the birthplace of Pablo Picasso, the city is of course brimming with museums and art galleries, set among a beautiful cityscape of castles, cathedrals and theatres.

The Costa del Sol itself is mostly peaceful and quiet, as although there is a good amount of tourism, largely for the fantastic beaches and warm climate (the average water temperature year-round is 18°C!), visitors tend to stick to the highly developed and bustling south-western part, leaving the stunning mountains inland largely untouched and peaceful year-round.

The region of Andalucía is culturally diverse and has a perfectly varied landscape, where picturesque beaches, ancient cities and desserts meet the incredible Sierra Nevada mountain range, which includes both the most southerly ski resort in Europe and the highest point of continental Europe!

With a sublime garden that includes fabulous dining options, casual seating and a large lawn, and is...

With a sublime garden that includes fabulous dining options, casual seating and a large lawn, and is perfectly child-safe thanks to a big perimeter fencing, Villa Mijas is a fabulous choice for those travelling with children. Then, of course, there’s the huge private pool in which the kids can splash and play to their heart’s content, with sun-loungers available for you to keep a close eye on the little ones.

While the spacious living room, open-plan with the kitchen and dining area and with direct garden access, is perfect for the evening – settle in for a calm movie night with all the group after an active day exploring the sublime coastline!

All along the magical Costa del Sol you’ll find memorable activities for the whole family, including kayaking, dolphin watching, kite-surfing, parasailing, snorkelling, windsurfing and loads more. Just a short drive away, near to Fuengirola, you’ll find both the Costa Water Park and the Mijas Aquapark, great for a day out!

Ask a question about Villa Mijas