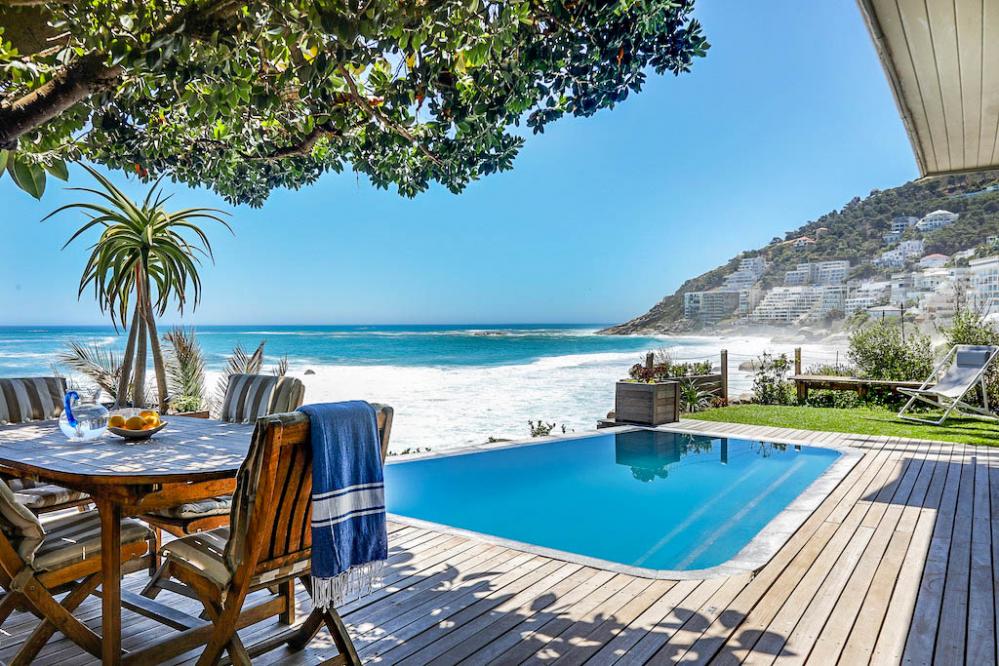 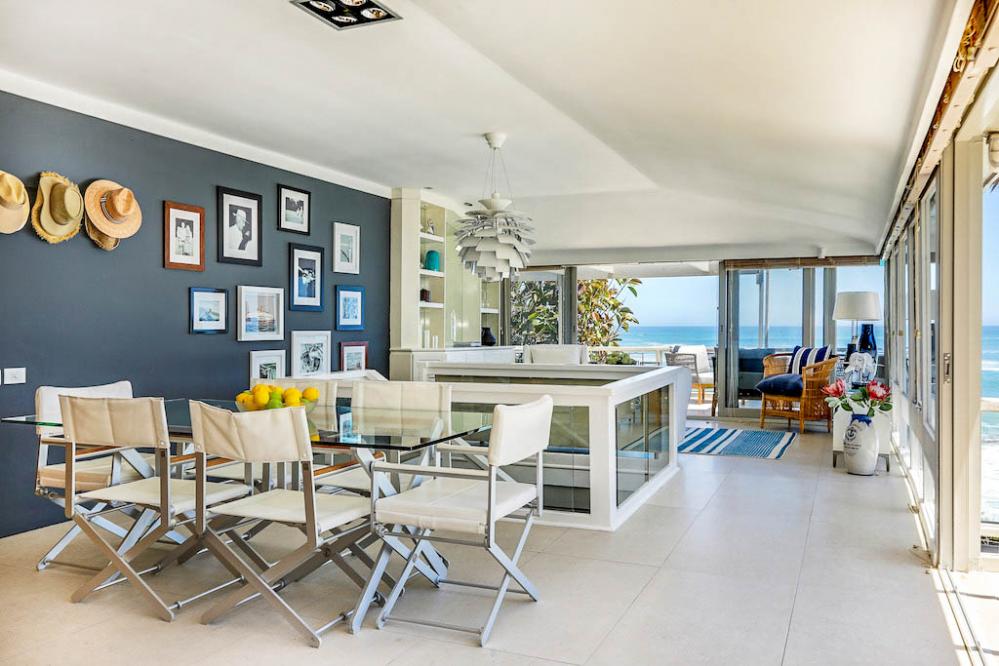 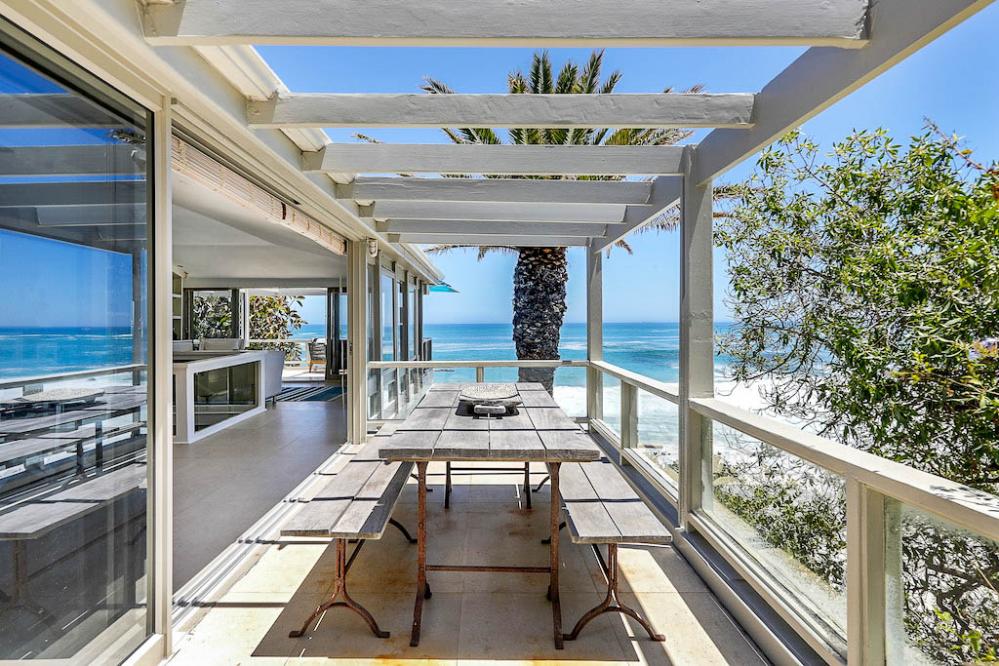 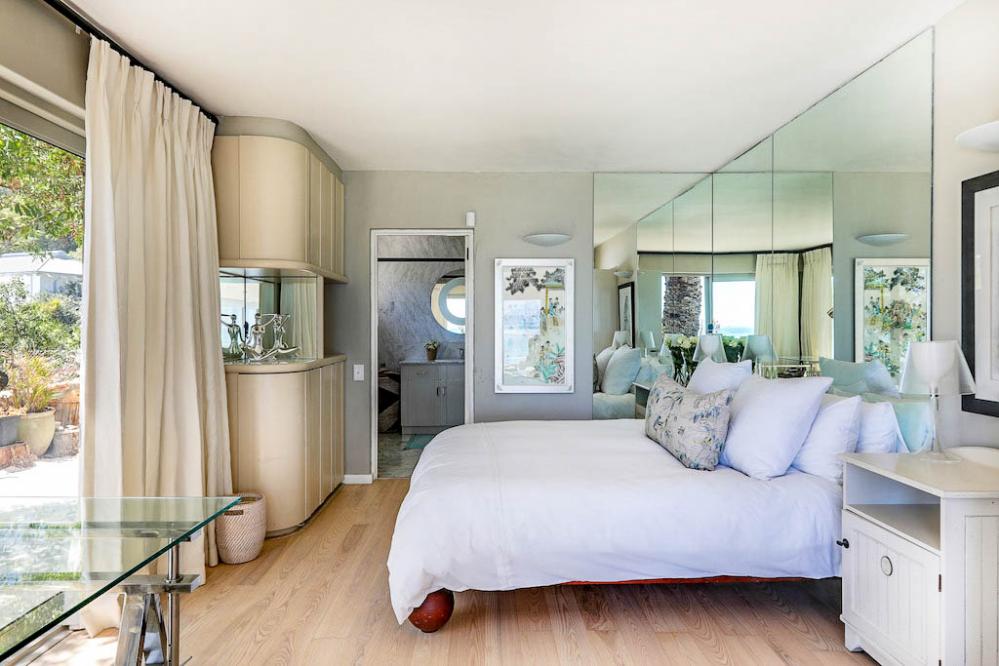 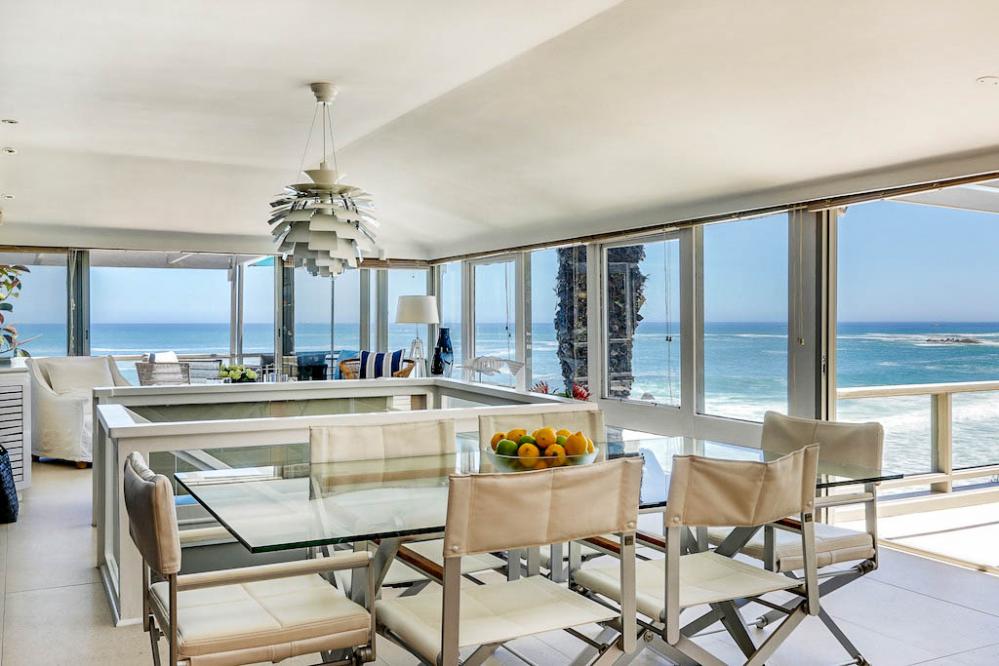 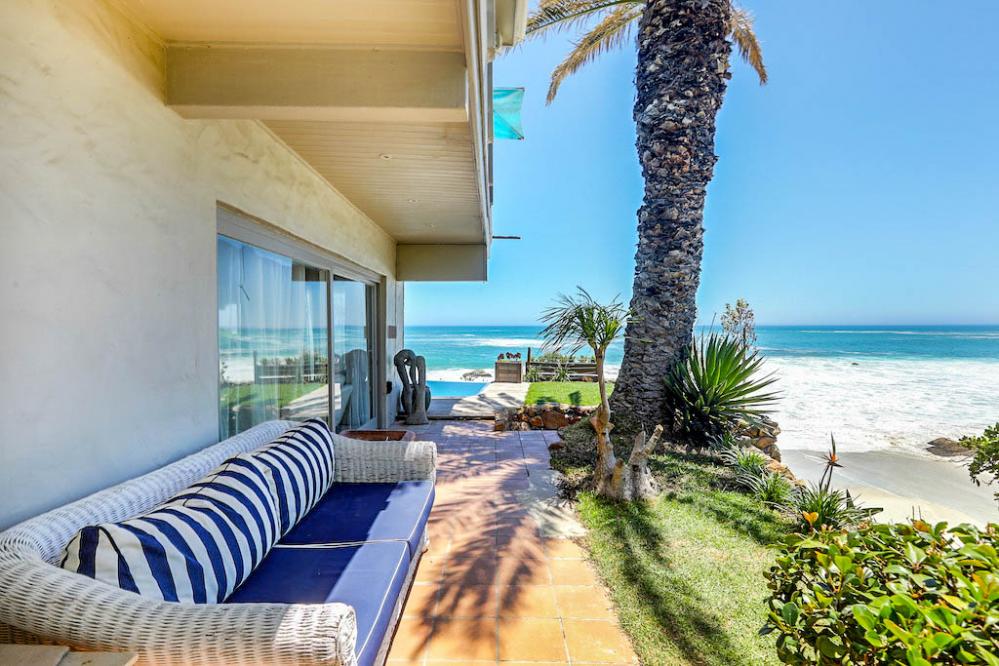 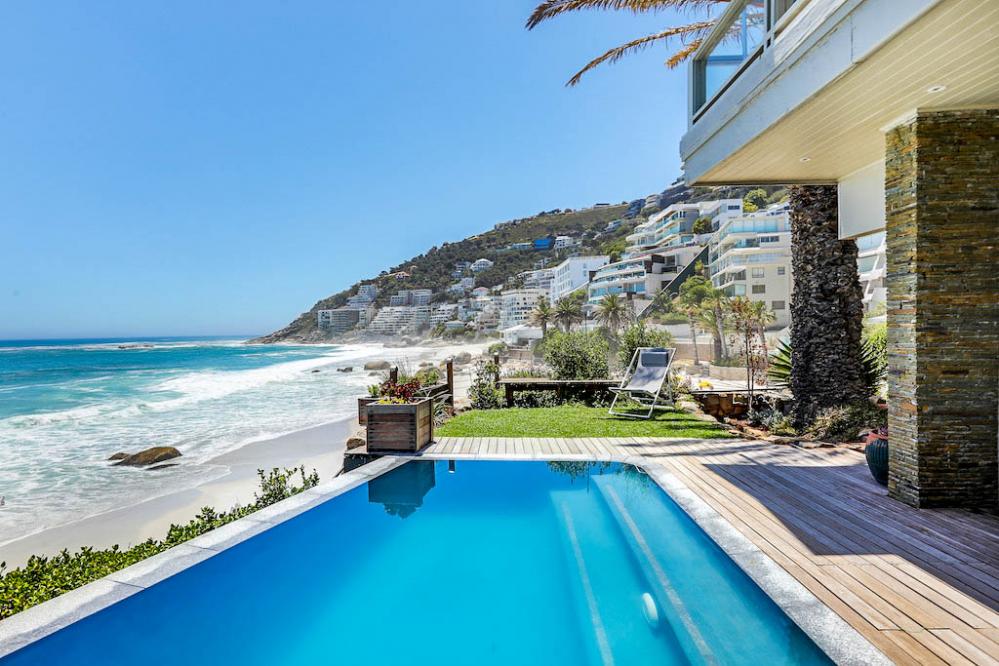 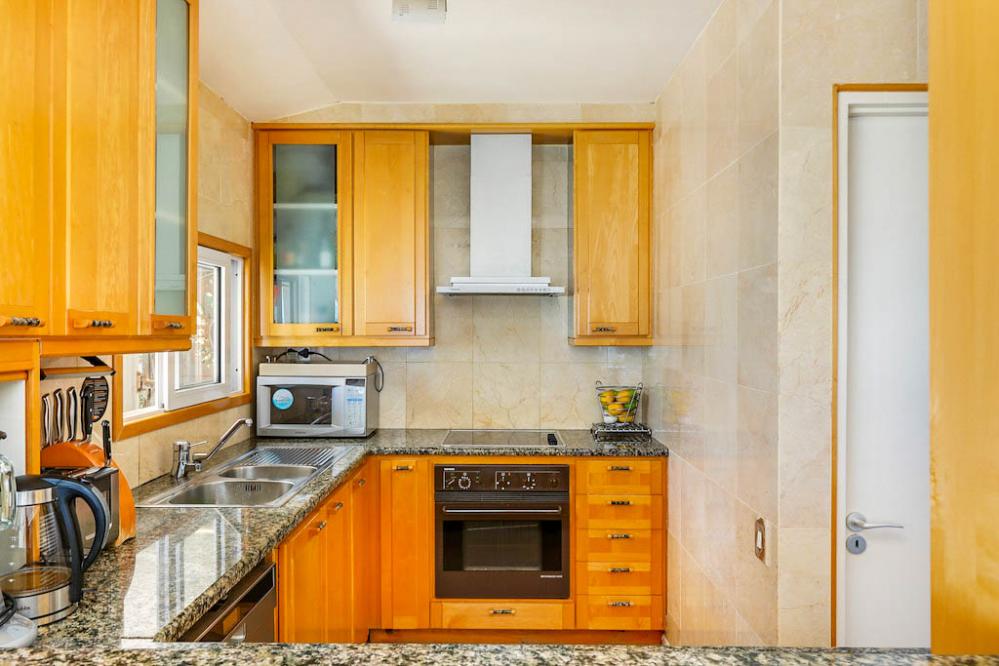 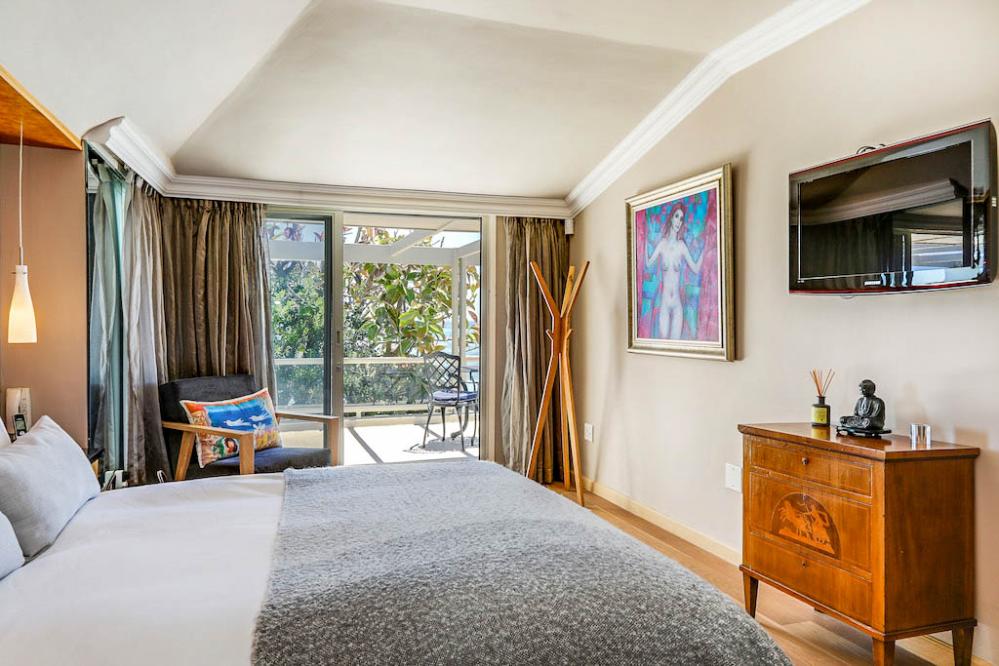 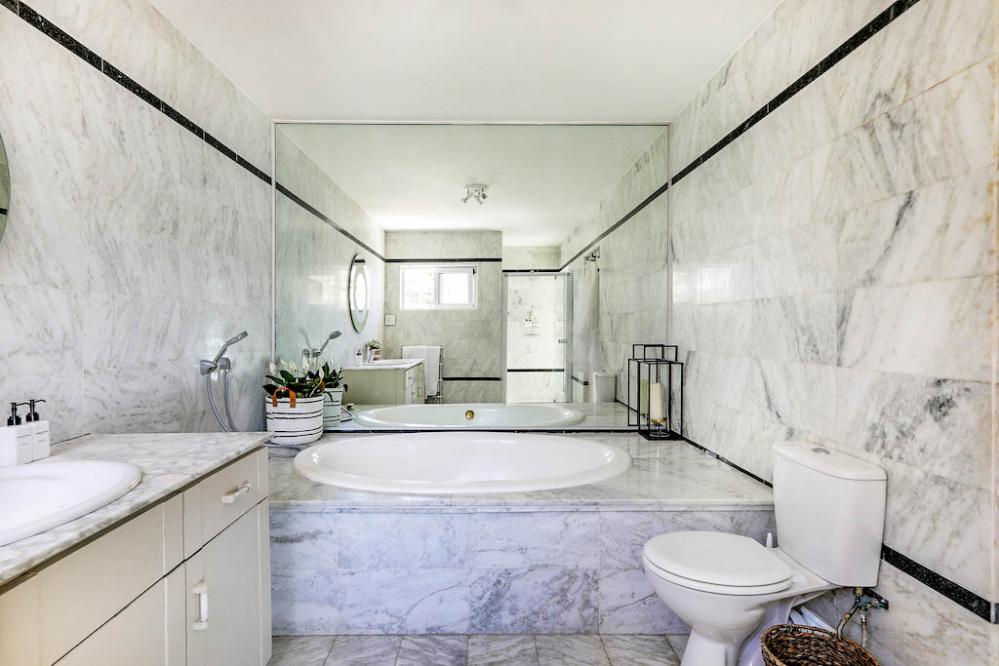 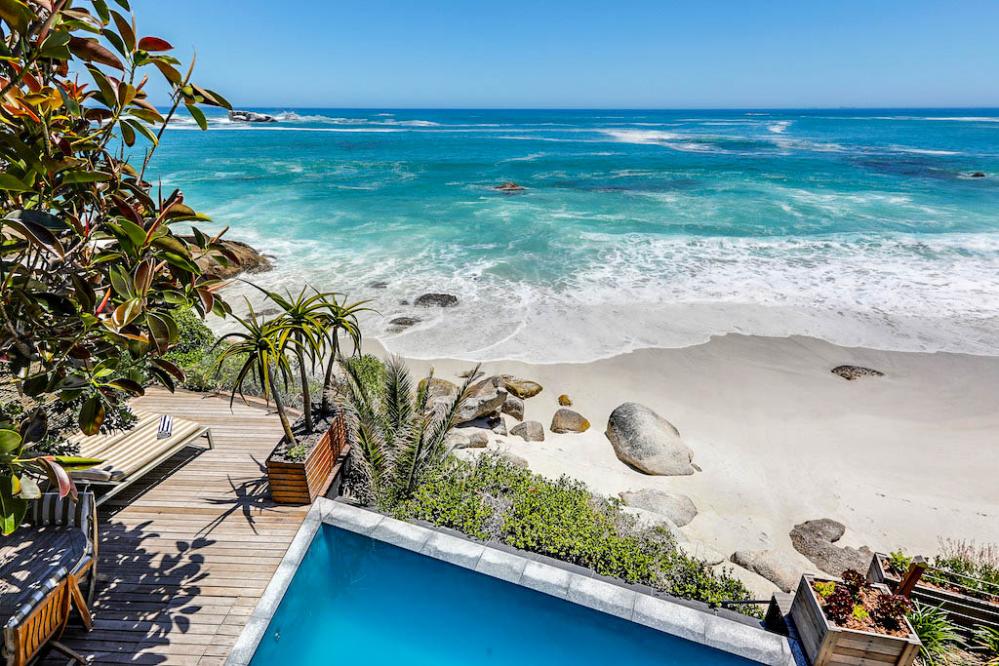 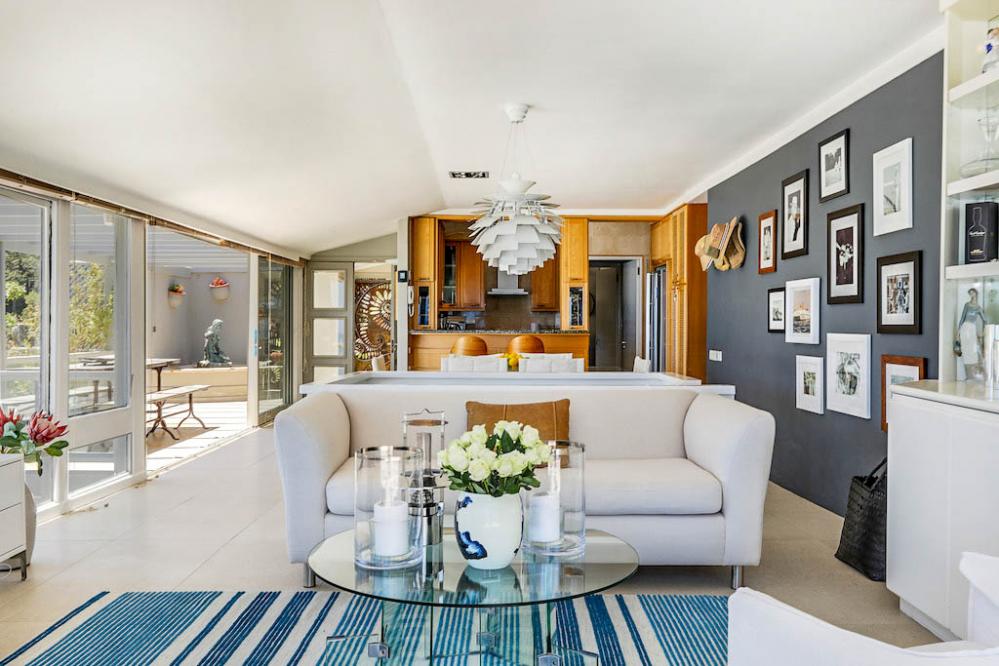 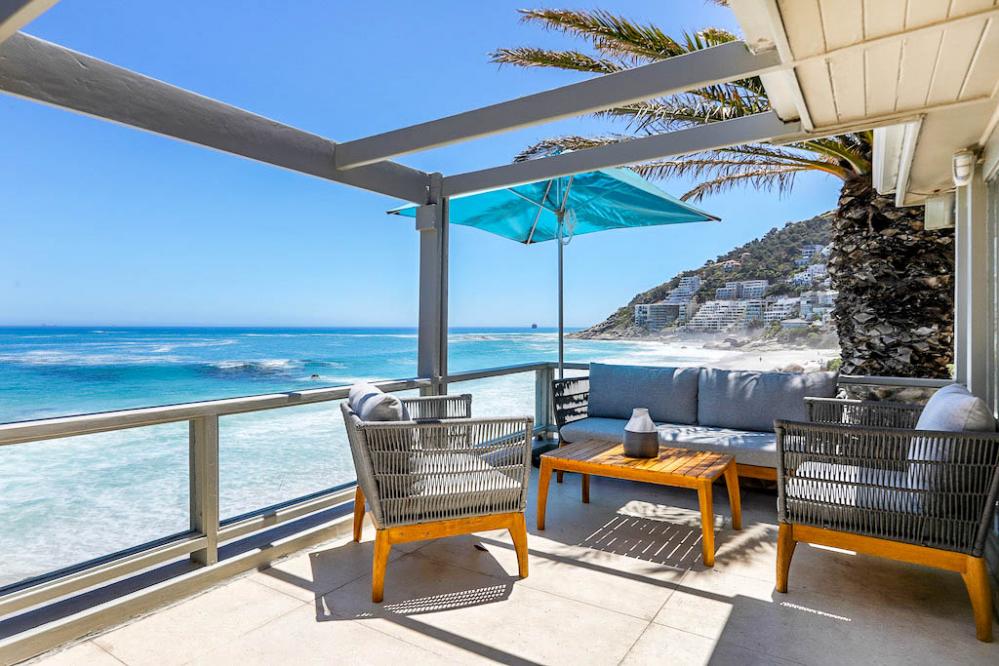 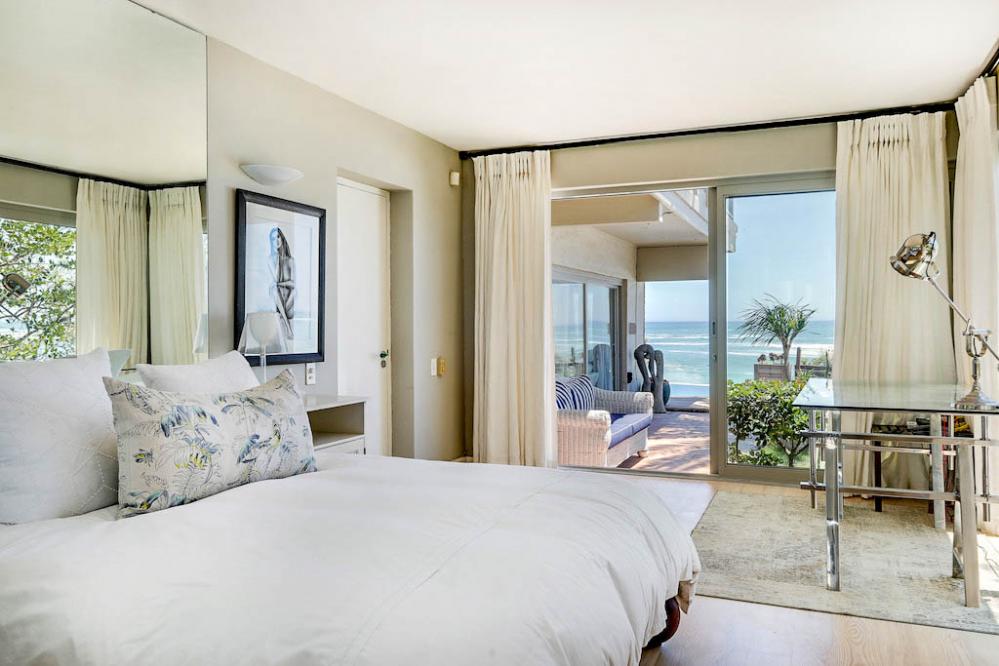 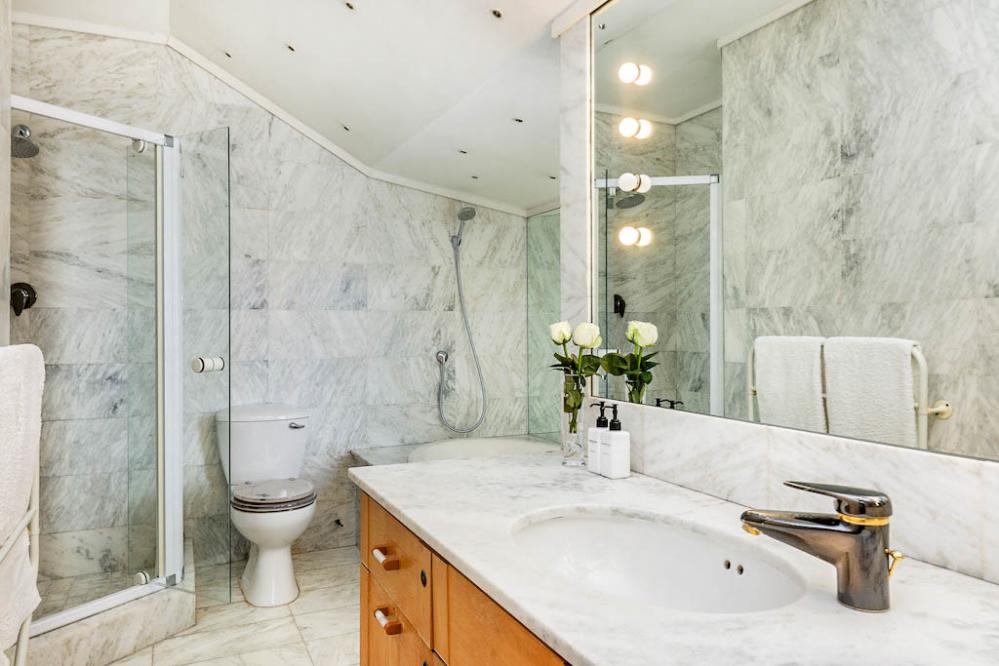 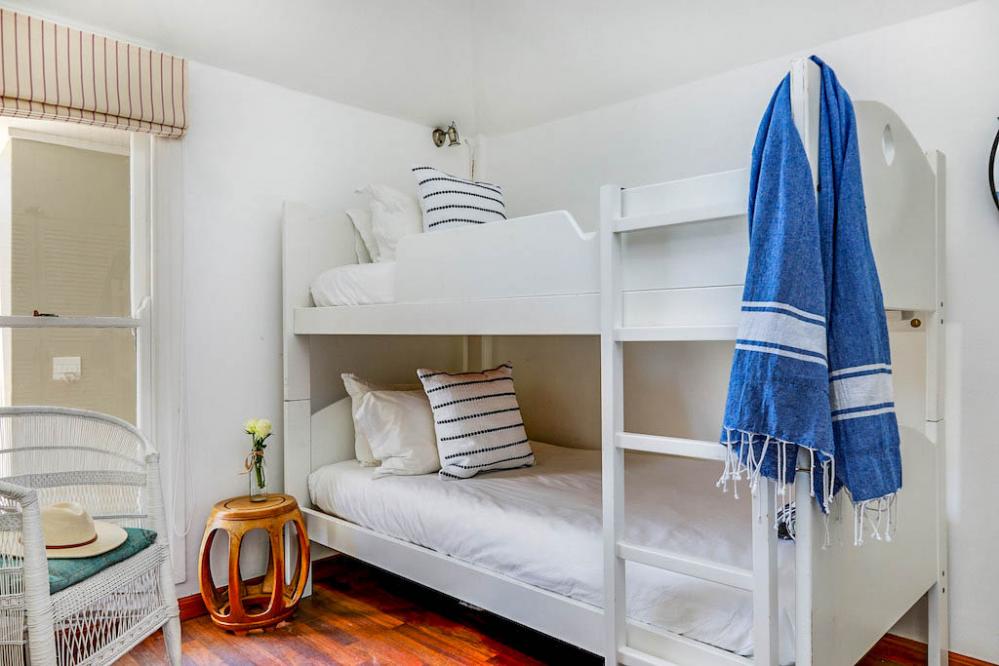 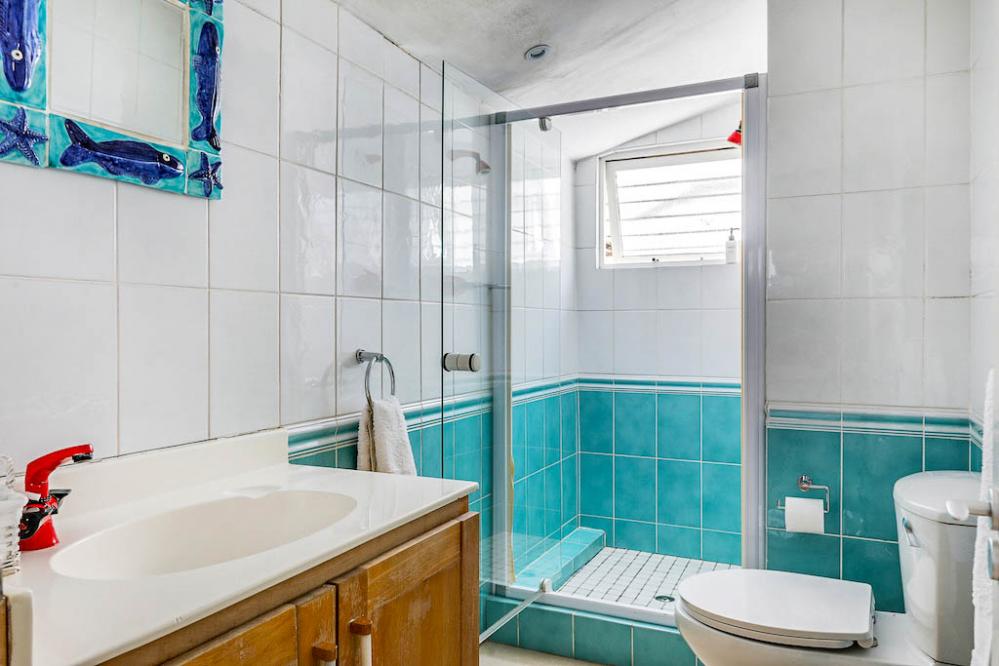 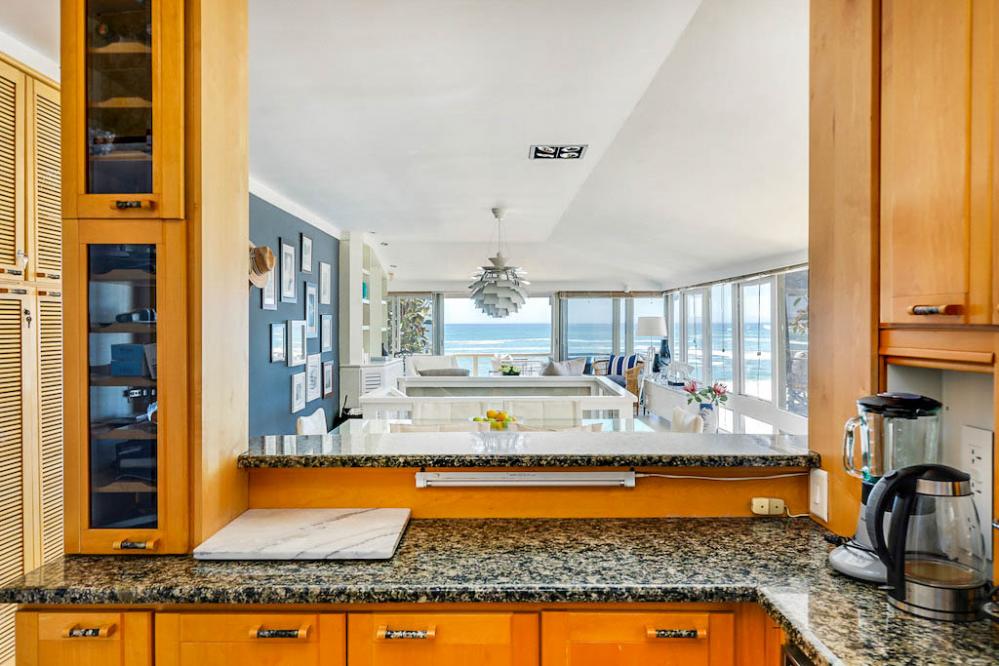 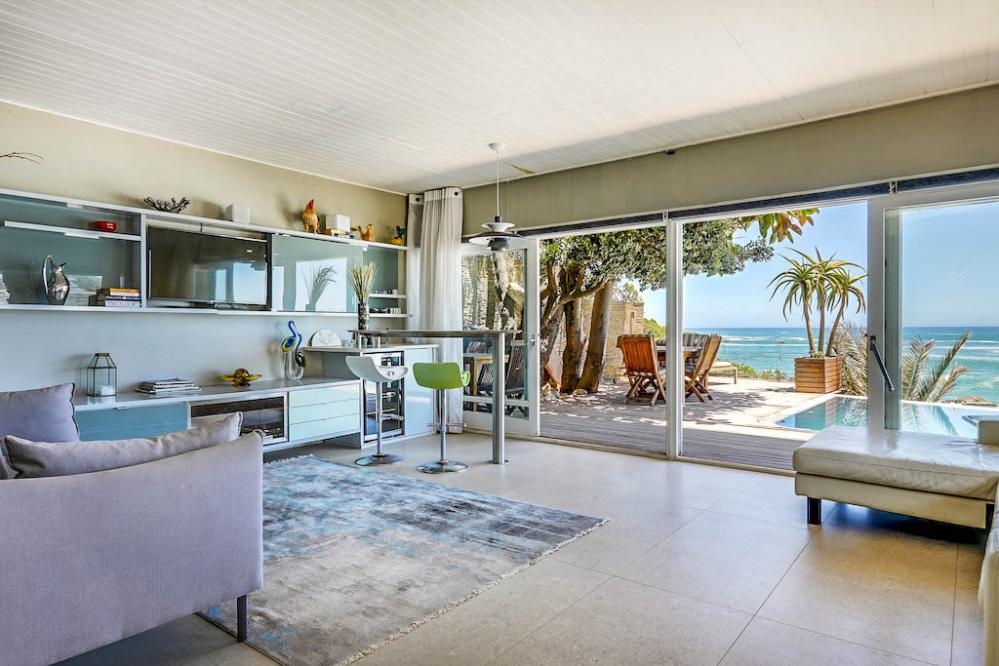 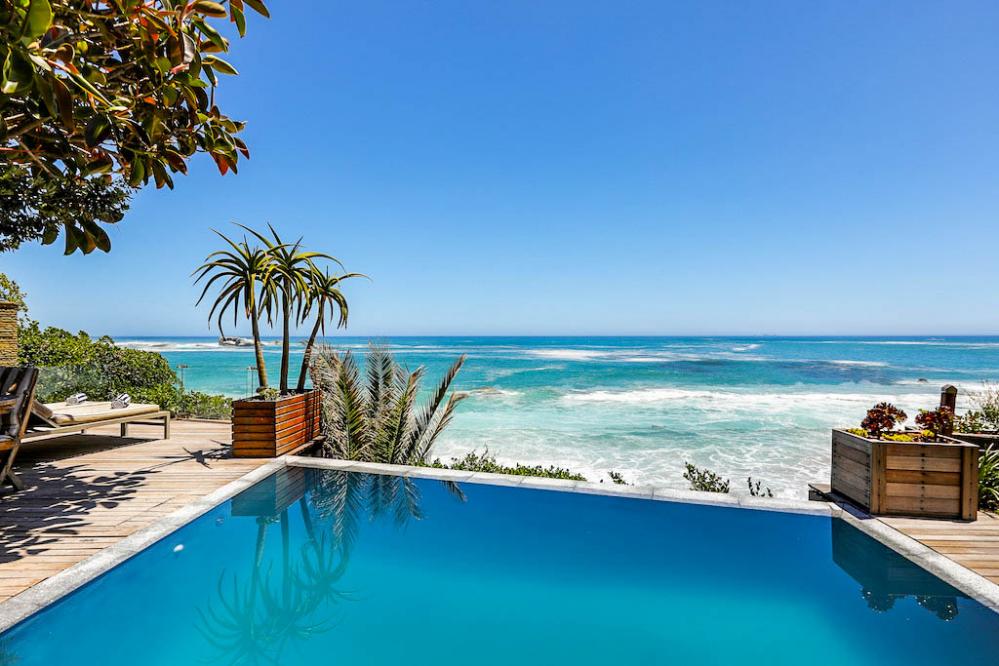 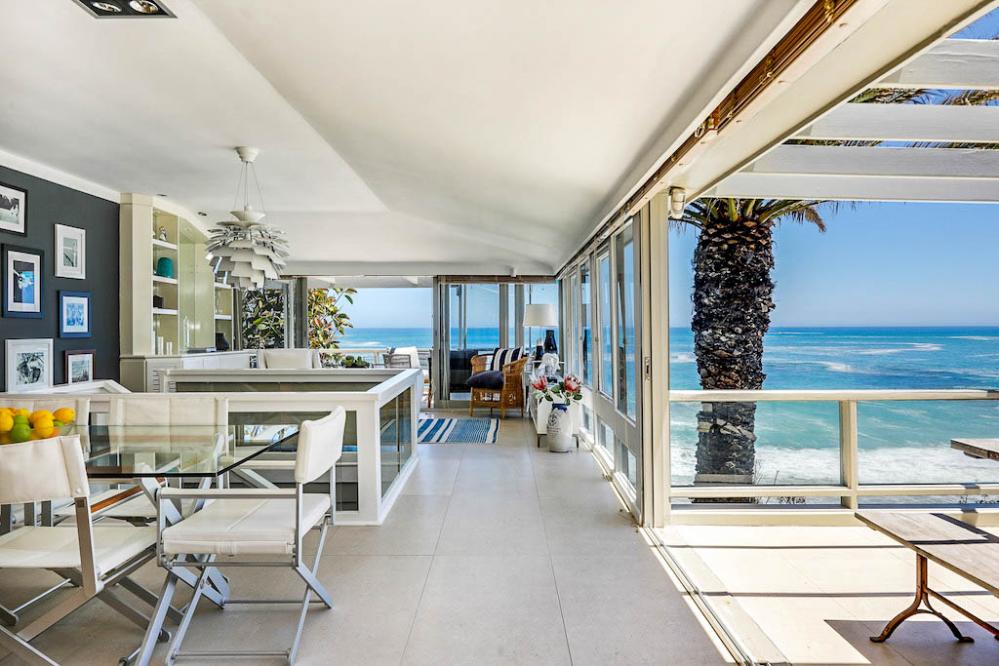 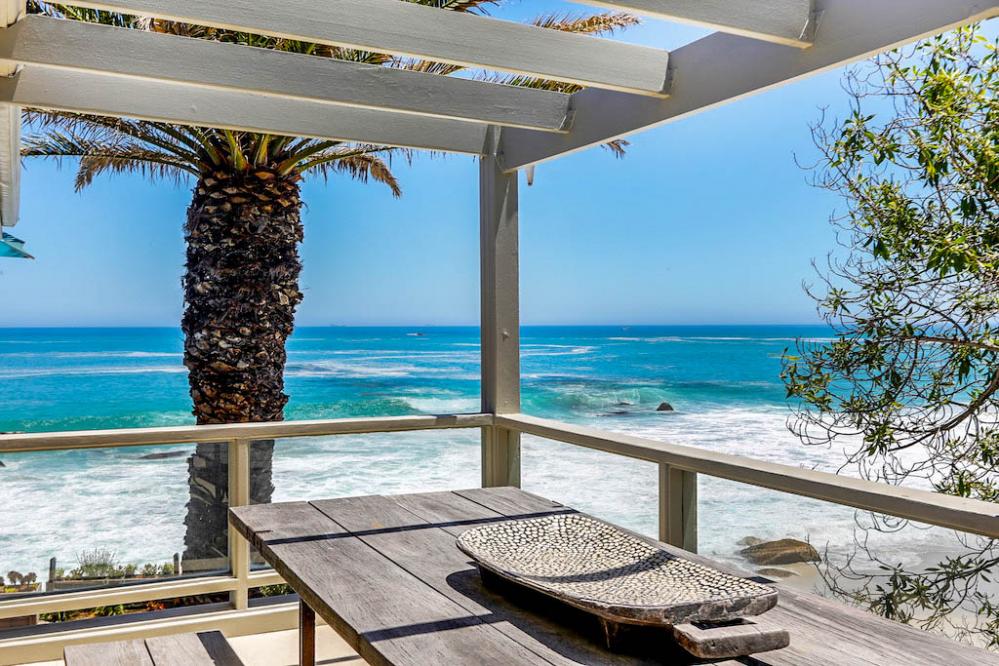 Spectacular home nestled right on the water’s edge of Clifton’s second beach, Cape Oceana is a stunning three-bedroom modern home in one of the city’s mos...

Spectacular home nestled right on the water’s edge of Clifton’s second beach, Cape Oceana is a stunning three-bedroom modern home in one of the city’s most exclusive areas!

Stepping inside, you will immediately appreciate how light and open the villa feels, with two full walls of glass framing these luxurious interiors. At one end is your modern kitchen with bright wood fittings and granite worktops, with a unique window into the main living area so you won’t miss out on a thing as you prepare delicious meals in this fully-equipped space. There’s a dining area right alongside it, and if you draw back the huge set of doors, there’s a second dining area on the terrace where you can dine alfresco with world-class views across the sea and the sparkling silver beach! To the far end of the room, meanwhile, is a lounge, where plush sofas and chairs are gathered around a coffee table, perfect for both socialising and simply switching off if you need it! There’s a superb terrace on this floor, with casual seating overlooking the sea and your gorgeous garden. You can also enjoy a second living room on the ground floor, where a full entertainment system awaits you, with direct access to the pool terrace!

On the first floor, you will find the majestic master suite, with a large double bed, a wall-mounted TV and traditional South African artworks and themes throughout. This room enjoys direct access to the first-floor balcony looking out over the sea – as well as an open-air shower to put you in touch with the energy of the natural world which surrounds you here. A twin room with a set of bunk beds completes this floor, with an adjoining bathroom with a large shower. And finally, there is a second superb double room on the ground floor, equally beautiful with a bright, rich design and tons of natural light thanks to the two sets of patio doors that lead you straight onto your exquisite pool terrace! Both of these delightful double rooms are accompanied by breath-taking en-suite bathrooms, each with a bathtub and separate shower and the most glamorous white marble designs!

And for the final touch of magnificence, step outside into your indulgent garden, where an extraordinary infinity pool stretches across the terrace, blending into the hundred hues of blue of the sea and the sky in the distance. Alongside the pool you’ll find a second alfresco dining area, as well as lovely loungers for settling into a little sunbathing, snoozing and soaking up the tranquillity of the sound of the waves!

Cape Oceana boasts an enviable location sitting on the rocks of Clifton second beach. It features 3 bedrooms and 3 bathrooms

Located right on the water’s edge of Clifton’s second beach, Cape Oceana is ideally placed to enjoy a little paddling, swimming or simply soaking up the sunshine in a picturesque environment!

But what’s more, with a stay in this exclusive, enchanting neighbourhood, you’re just a short drive from both the City Bowl and the V&A Waterfront, perfect for getting out and about to the many stunning sights of the city!

Just a little way to the south is Camps Bay where you will find plenty of restaurants, bars and cafes, as well as, of course, more beaches! Meanwhile, just north of the four Clifton beaches and also within walking distance is Bantry Bay and its Sea Point Promenade, ideal for gentle strolling or even jogging, all with the most magnificent views!

The iconic V&A Waterfront, a retail and entertainment area right at the foot of Table Mountain, is home to tons of shops, restaurants, markets of all kinds and even both an Aquarium and Marine Museum. It is the starting point for almost all tours, cruises and excursions. Within a short walk of it is the Green Point market, tucked just outside the Green Point Stadium. Visit on Sundays to find locals selling all kinds of authentic arts, craft and curios – just be sure to barter, as they’ll be expecting you to!

And why not take a trip up Table Mountain? You can take the cable car (or a 2 to 3 hour very steep walk!) up to the top, where 2km of paths can be wandered giving you panoramic views of the city and Table Bay. There’s even a restaurant up here for dining with a view! The Table Mountain National Park, which comprises several areas of interest along the peninsula, including Cape Hope and Cape Point, is simply bursting with fascinating wildlife including ostriches, antelopes and baboons, and of course breath-taking scenery! The Kirstenbosch National Botanical Gardens also make for a fantastic day in nature, with remarkable views and a diverse array of plants, forest and gardens across 528 hectares!

One on the region’s most iconic locations is Boulders Beach, home to a colony of thousands of African penguins which you can watch and admire in their natural habitat, and it’s only around one hour from the villa! Top tip – head over in September during the breeding season to try catch a glimpse of penguins hatching!

Head to the V&A Waterfront to take a tour of Robben Island, the Maximum Security Prison where political prisoners, including Nelson Mandela, were held during the apartheid for an unforgettable day trip. The trip includes not only a tour of the prison itself but also meeting a former political prisoner and a tour of the 575-hectare Island which often includes sightings of penguins!

If you’re a fan of wine you already know South Africa is unmissable – what you might not know is that Constantia Valley, with estates dating back to 1685, is the oldest winemaking region in the southern hemisphere! In this exquisite valley you will find not only vineyards but also countless excellent restaurants to enjoy along the way! As well as wine, Cape Town and its surrounding region are major fruit producers and you can enjoy some of the freshest, most delicious fruits around here. As you’d expect, there is also tons of seafood, including yellowtail, cape salmon and kingklip, which are absolutely delicious.

Tucked right on the beachfront, with a superb garden with a private pool and even a little lawn, Cap...

Tucked right on the beachfront, with a superb garden with a private pool and even a little lawn, Cape Oceana is a haven for any family whether you’re looking to rest and relax or experience the wild side of Cape Town and the immense landscape around it!

Kids of all ages with delight in this fabulous garden, whether its splashing and playing in the huge infinity pool, frolicking on the lawn or taking a rare moment of rest in the sunshine. But if you’re after some more active pursuits, this is also an excellent location for both water-sports and a little fun and adventure on land! With white sand beaches for miles in every direction, kids are guaranteed to adore a stay in this beautiful villa. And if it’s more than just swimming they’re after, fear not – you’ll find an inspiring selection of water-sports available all along the coastline! Surfing (and kite surfing) are, as you might expect, major sports in the area, thanks to the varied coastline made up of protected coves to huge open beaches with enormous waves, promising something for all levels!

You can also take part in a little sea-kayaking, where you have a good chance of spotting seals, penguins, dolphins – and even the odd whale! Or even take an official trip whale watching where you’re likely to see Southern right whales, bottlenose and dusky dolphin and occasionally even humpback and killer whales! As well as this there are loads more activities to take part in across the region, including helicopter rides, hot air ballooning, paragliding, shark cage diving… you name it. 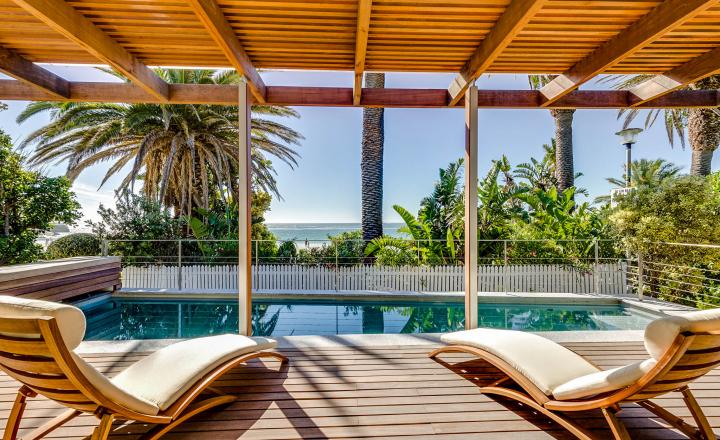 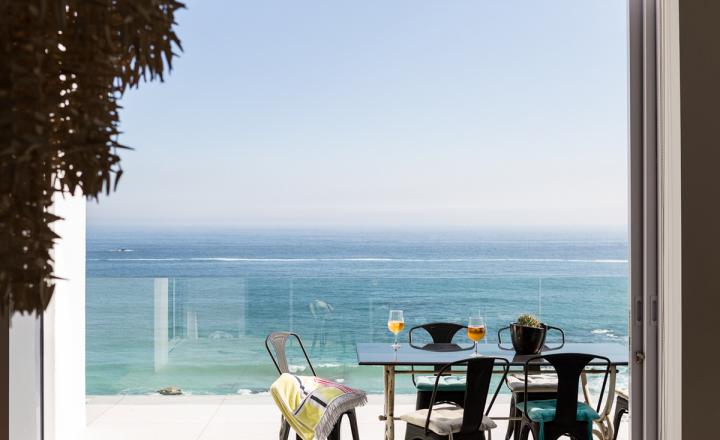 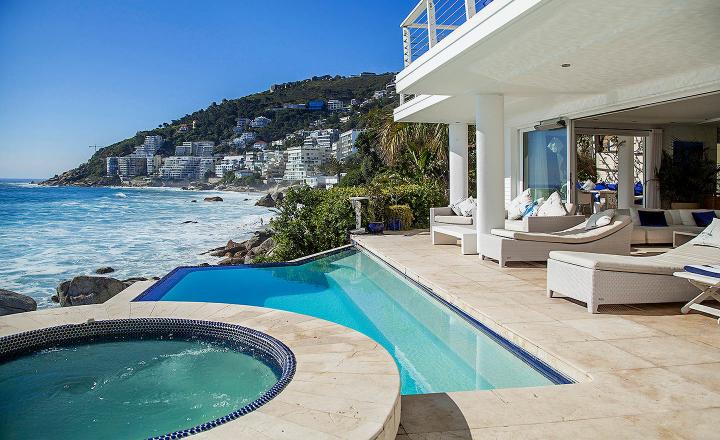 Ask a question about Cape Oceana