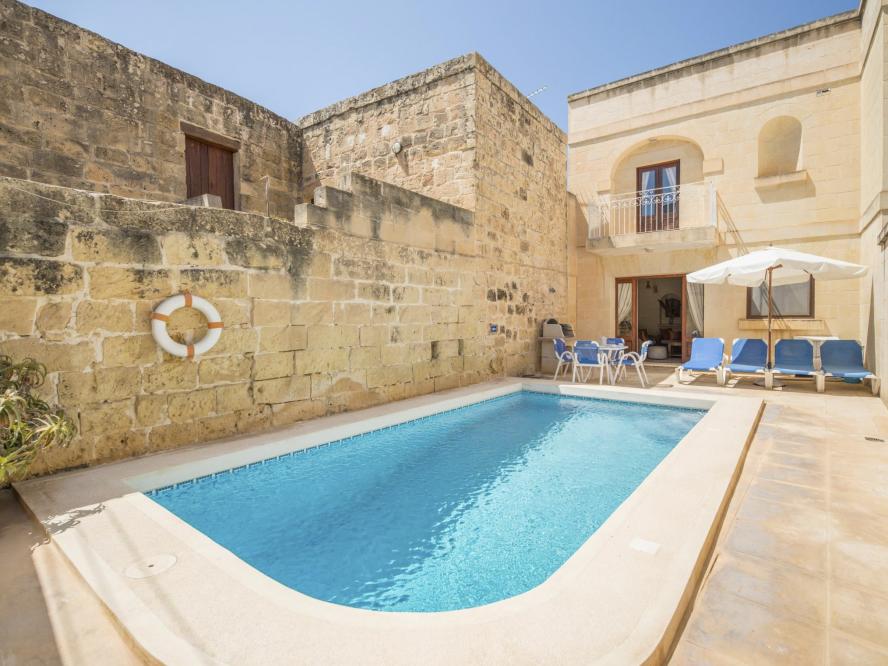 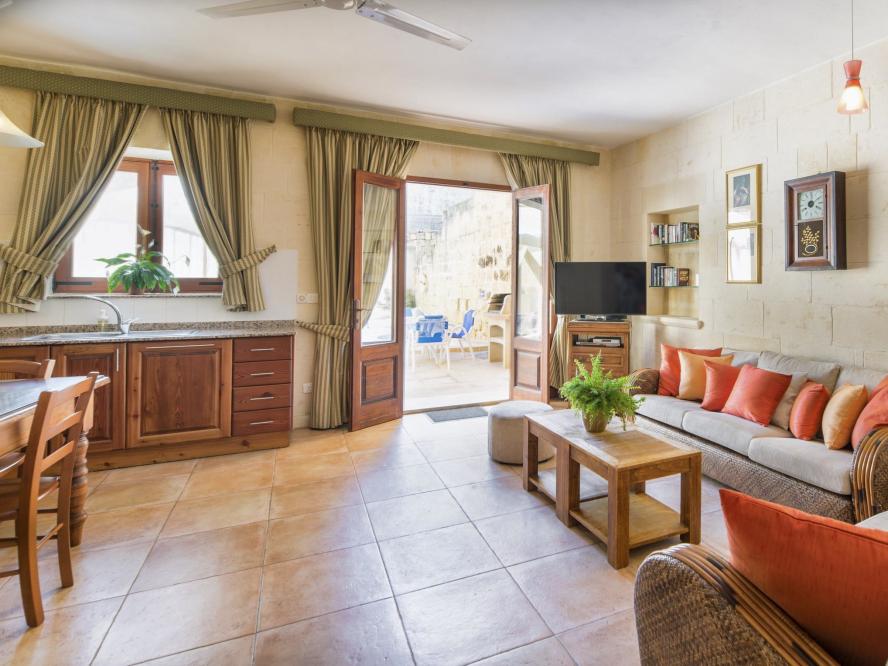 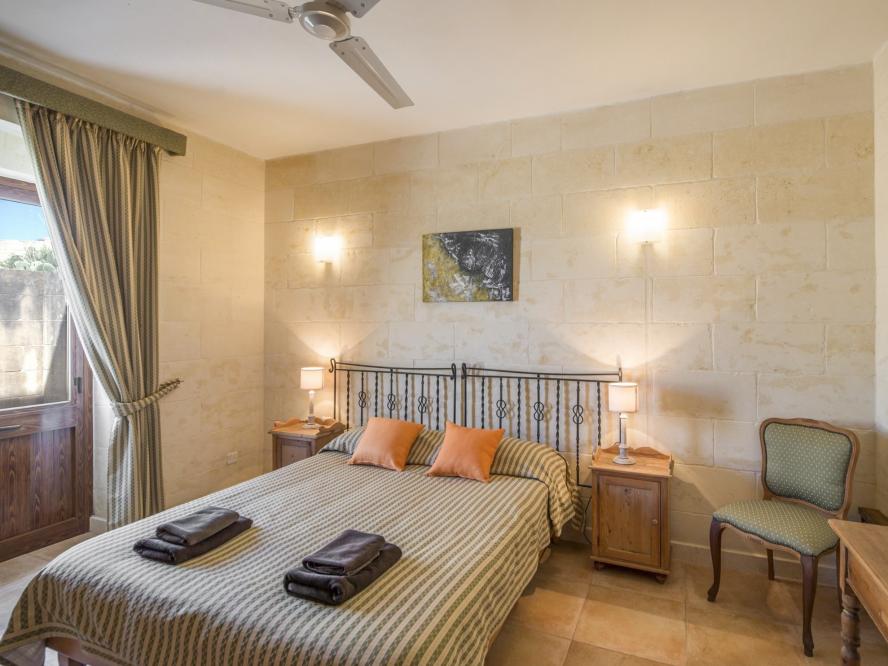 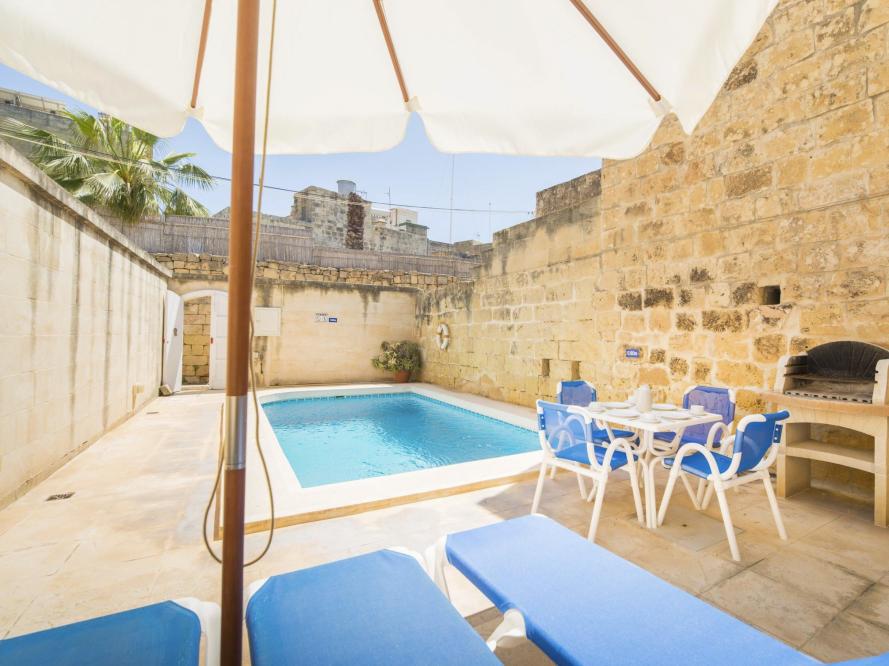 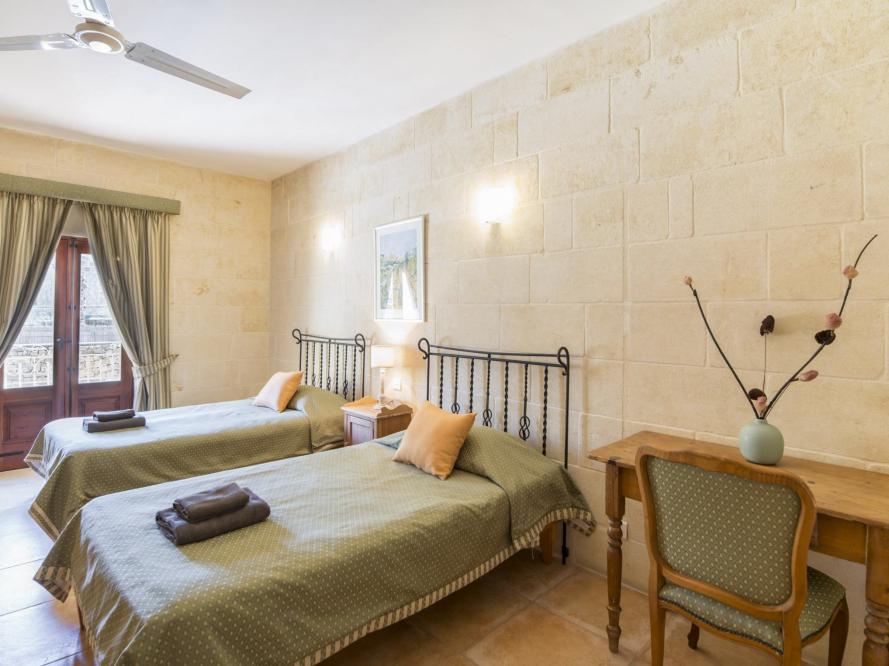 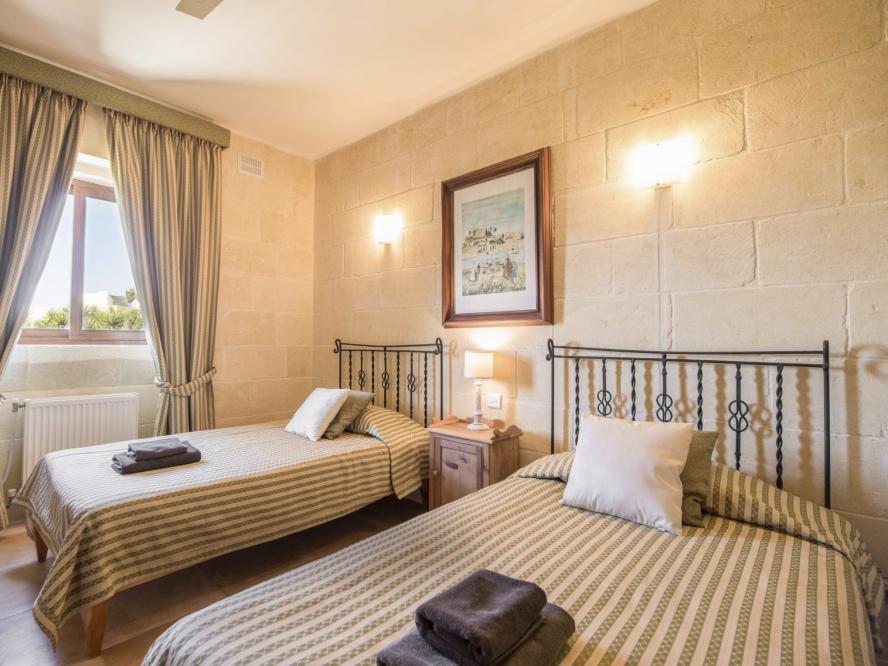 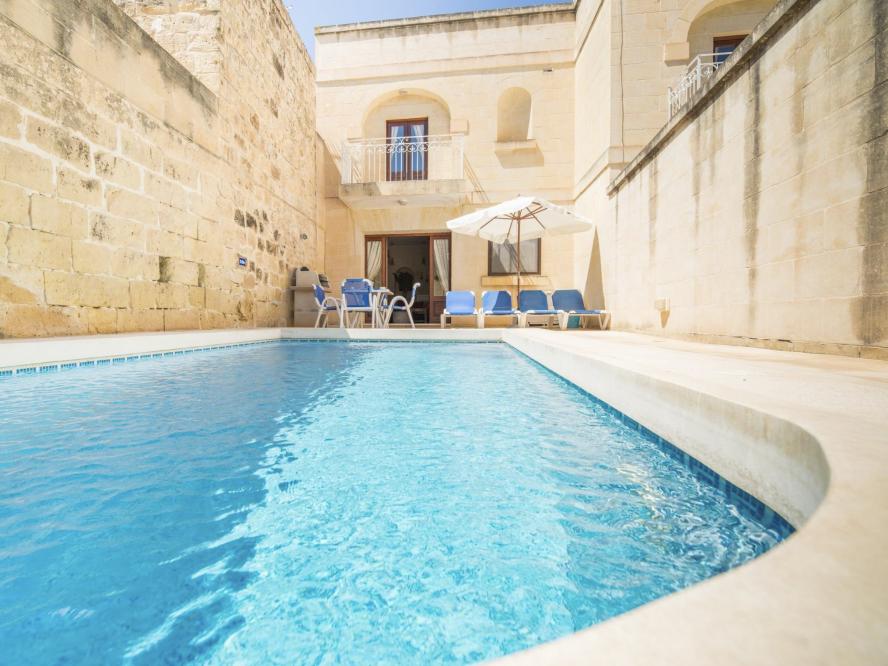 There’s an attractive Mediterranean feel to Farmhouse Liena, a 3-bedroom property in Xewkija, around 3km from the centre of Victoria on the Maltese island of ...

There’s an attractive Mediterranean feel to Farmhouse Liena, a 3-bedroom property in Xewkija, around 3km from the centre of Victoria on the Maltese island of Gozo. This elegantly furnished holiday home includes a secluded, private terrace and a delightful 3m x 2m swimming pool.

The house is less than 10 minutes’ drive from all the amenities of the island’s capital, Victoria. There are many café terraces and restaurants to discover around the town, as well as plenty of shops. You are sure to be charmed by its old stone buildings and relaxed character.

At Farmhouse Liena, you have a beautiful outdoor pool with a chilled-out sun terrace right next to it. There is a barbecue and dining area, as well as a quartet of sun loungers in this space, which offers privacy and peace.

Step inside and you are straight into the main living area, which offers comfortable seating, TV and a dining table and chairs. The kitchen is incorporated into this open-plan area, and provides you with an oven, microwave, fridge and dishwasher.

Up to seven guests can be accommodated in Farmhouse Liena’s three bedrooms. The first is a double, while the other two have twin beds. A fold-out bed for one person is also available in one of the twin rooms. All the bedrooms count with their own en-suite bathroom. Among the villa’s other facilities are a washing machine, telephone and wireless internet.

In a quiet, residential area, Farmhouse Liena is quite centrally located, and Gozo is small, so it will only take a few minutes to reach anywhere on the island. Outside of Victoria, you have several good beaches such as Dwerja to discover, with clear waters that make them popular with swimmers and divers. You could also head offshore to the island of Comino, which sits between Gozo and Malta – its turquoise Blue Lagoon is certainly well worth seeing.

Farmhouse Liena is a charming villa located in the beautiful island of Gozo, it sleeps 6 people.

Around 20-30 minutes’ ferry ride from Malta itself, the island of Gozo provides a quieter and less...

Around 20-30 minutes’ ferry ride from Malta itself, the island of Gozo provides a quieter and less tourist-heavy experience than its neighbour. The second-largest of the three inhabited Maltese islands, at around 13km by 6.5km, it’s home to approximately 37,000 people – its residents being known as Gozitans.

The capital, Rabat, is the centre of the action, but is by no means a metropolis. Alternatively known as Victoria (avoiding confusion with the Rabat on Malta), its fortified city and the surrounding Old Town are well worth a visit from a historical point of view, with a variety of museums on hand to provide further details. Among them are the Cathedral Museum, the Folklore Museum and a Museum of Archaeology.

The grand St George’s Basilica is a must-see located right in the centre of town, and the church’s magnificent works of art and impressive architecture only add to its status as one of the most important on the island. The Old Prison offers a different but equally fascinating look at the island’s past, and forms part of a heritage tour which allows you to visit a variety of Victoria’s notable sights.

Victoria offers a good range of shopping, with several malls and a daily market on Independence Square. For a little bit of peace and quiet, the pretty Villa Rundle Gardens are a good bet, and provide some nice spaces for families.

Due to the island’s small size, it doesn’t take long to reach some of Gozo’s other places of interest from Victoria, although public transport isn’t always that reliable. You can, however, bring a hire car across from Malta on the ferry, at an additional cost. Locations you might want to check out include beaches like Ramla-I-Hamra and San Blas Bay on the northern coast, and the Dwerja inland sea. This was, until quite recently, the site of the Azure Window, a rock arch which became something of a local icon and a popular visitor attraction until events took their toll and it finally collapsed. Even without it, however, the beach at Dwerja is one of the most pleasant on the island.

Gozo also offers some incredibly scenic walks. Tal-Merżuq Hill is a hard but rewarding climb, while the valley of Wied l-Għasri takes you down to the sea where divers often explore the underwater caves. Head up to the remote coastal spot of Xwejni for some wonderful star-gazing opportunities – they also say you can see the tail-lights of the cars on Sicily on a clear summer night.

There is a lot of charm about Farmhouse Liena that the kids are sure to love. This good-looking hous...

There is a lot of charm about Farmhouse Liena that the kids are sure to love. This good-looking house comes equipped with TV, Wi-Fi and a pair of stylish twin bedrooms that are great for sharing – not to mention a magnificent pool just outside the door.

The experience of taking the ferry from Malta to Gozo is one that’s bound to delight them – it feels like a magical trip from one world to another. The island provides plenty of lovely beaches and coves to seek out, with the likes of Dwerja and the Blue Hole on the western coast certainly scenic enough to warrant a family visit. Ramla Bay on the northern coast is another good spot for playing on the beach or perhaps enjoying a picnic in the sun.

There are lots of playgrounds and pretty gardens around the island that young children will enjoy too, such as Three Hills Garden in Marsalforn and the recently upgraded Villa Rundle Gardens in the capital, Victoria. The Qbajjar promenade and the nearby Salt Pans are also ideal for a day out.

They may also be captivated by the magnificent Citadel in Victoria – it has become a big visitor attraction and really brings the history of the island alive in a range of creative ways. Many cultural events take place within its walls too, so you may even get to catch a show. 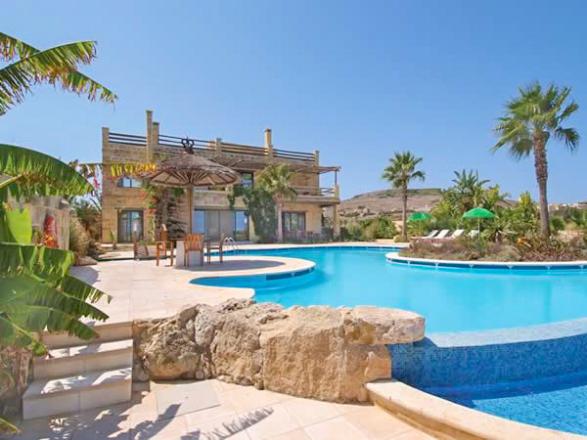 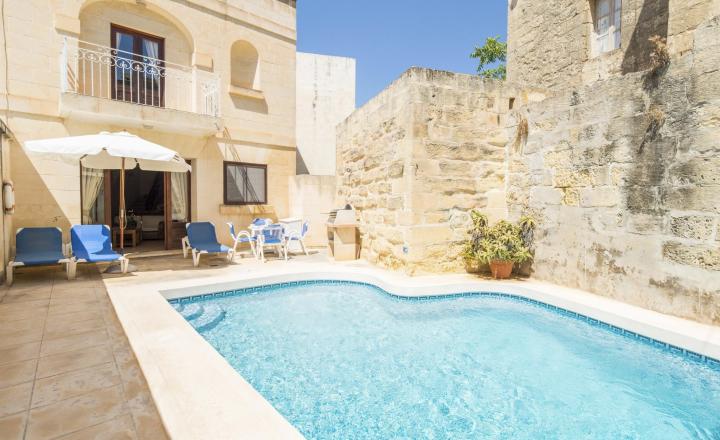 Ask a question about Farmhouse Liena