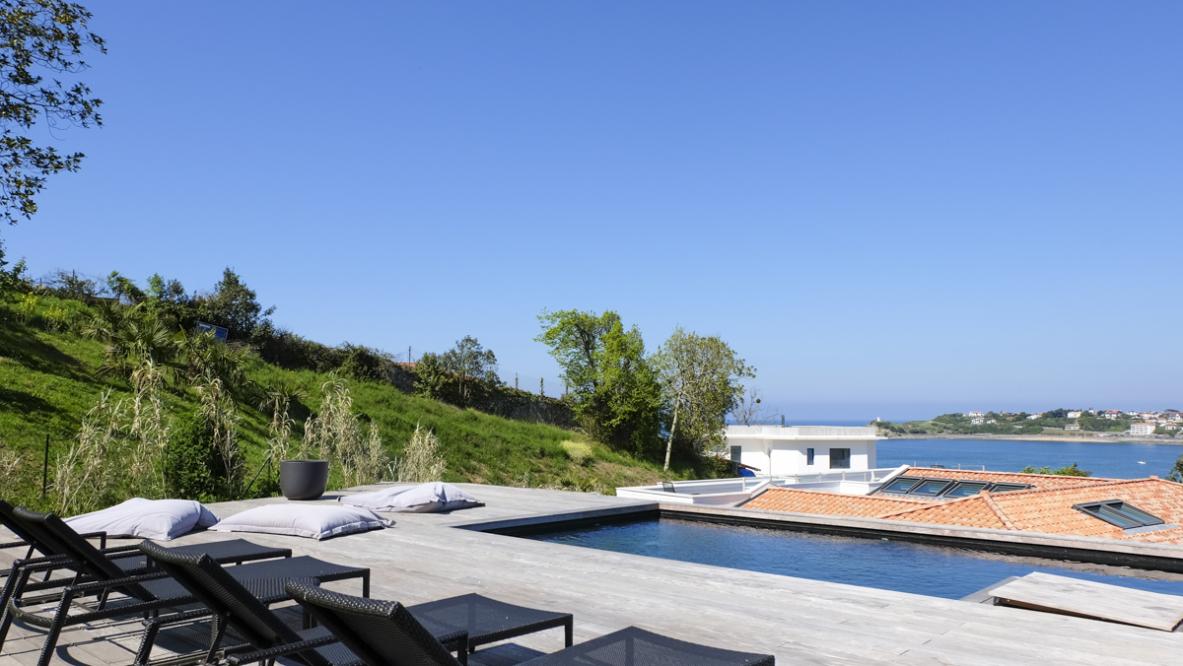 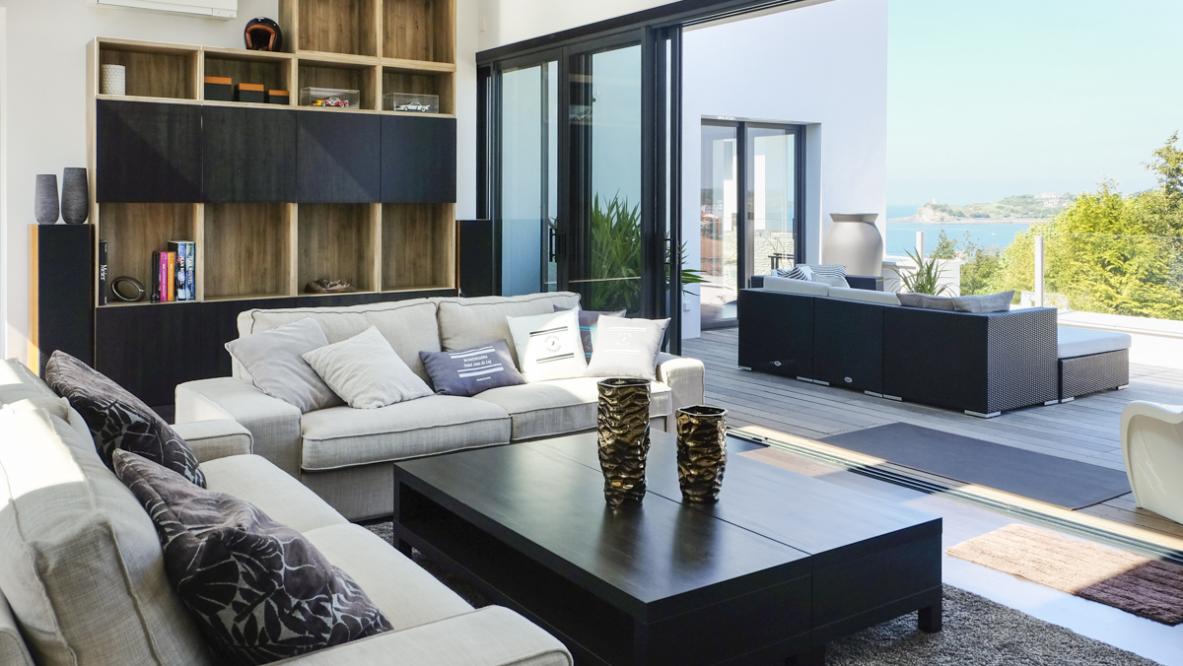 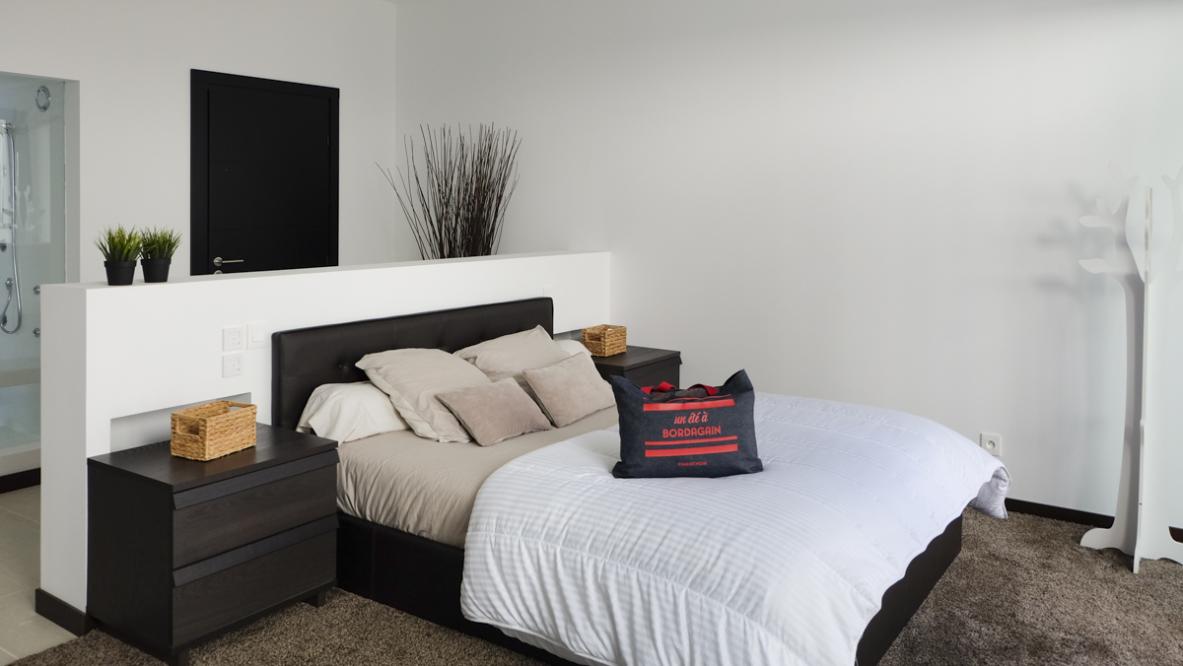 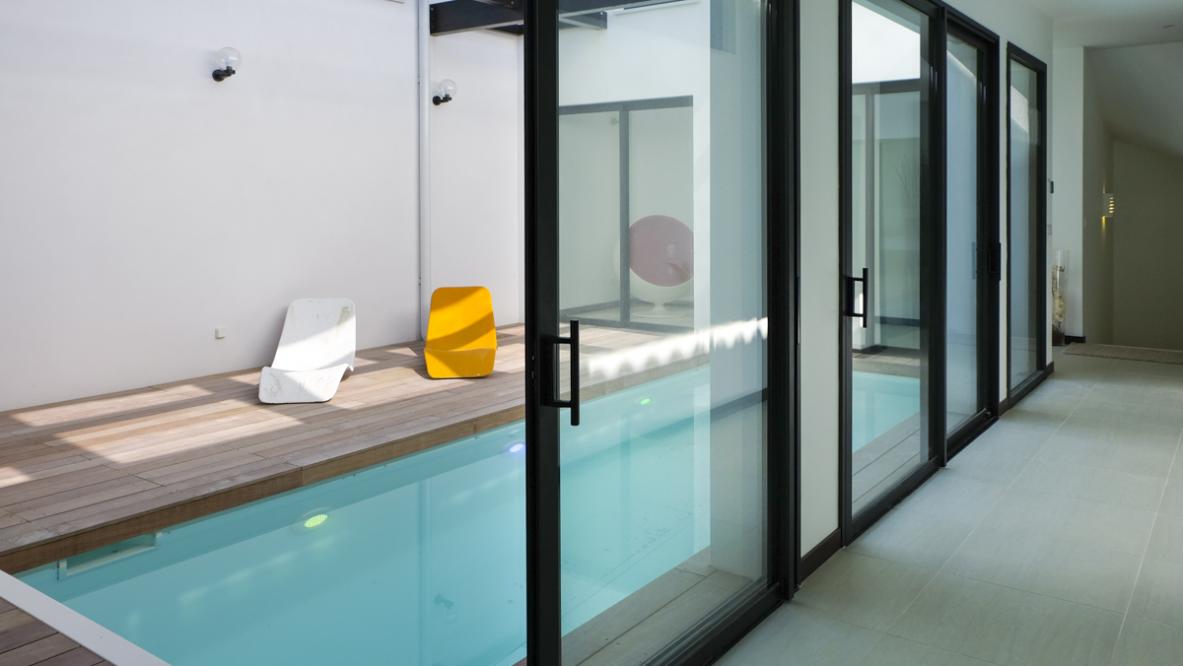 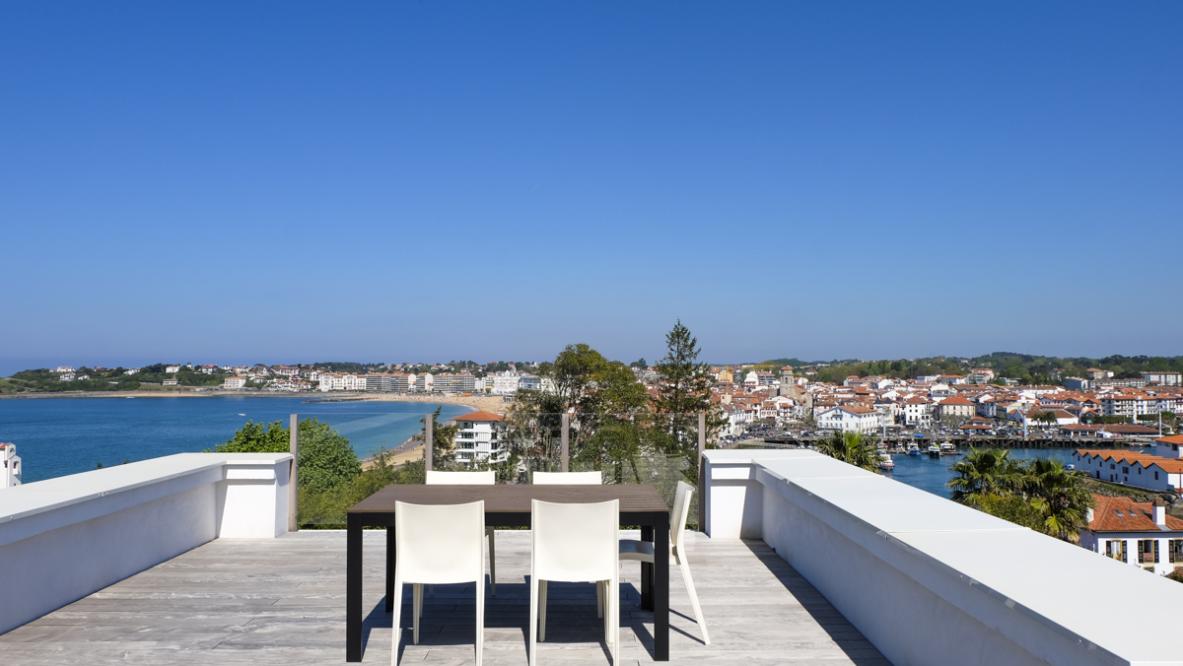 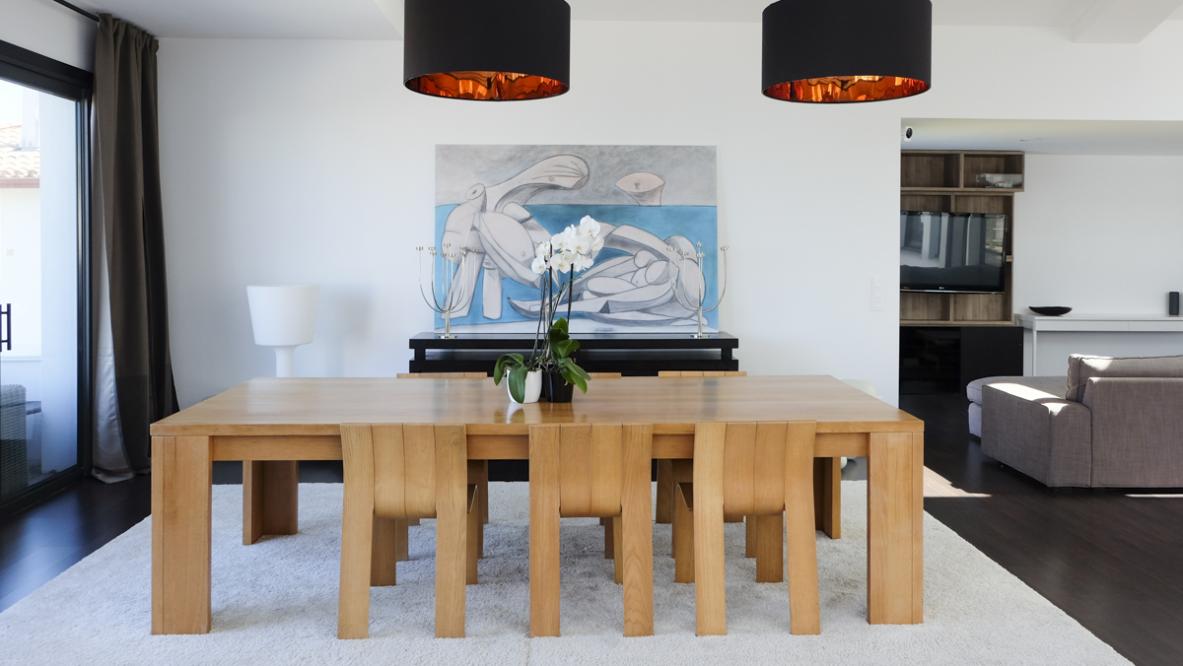 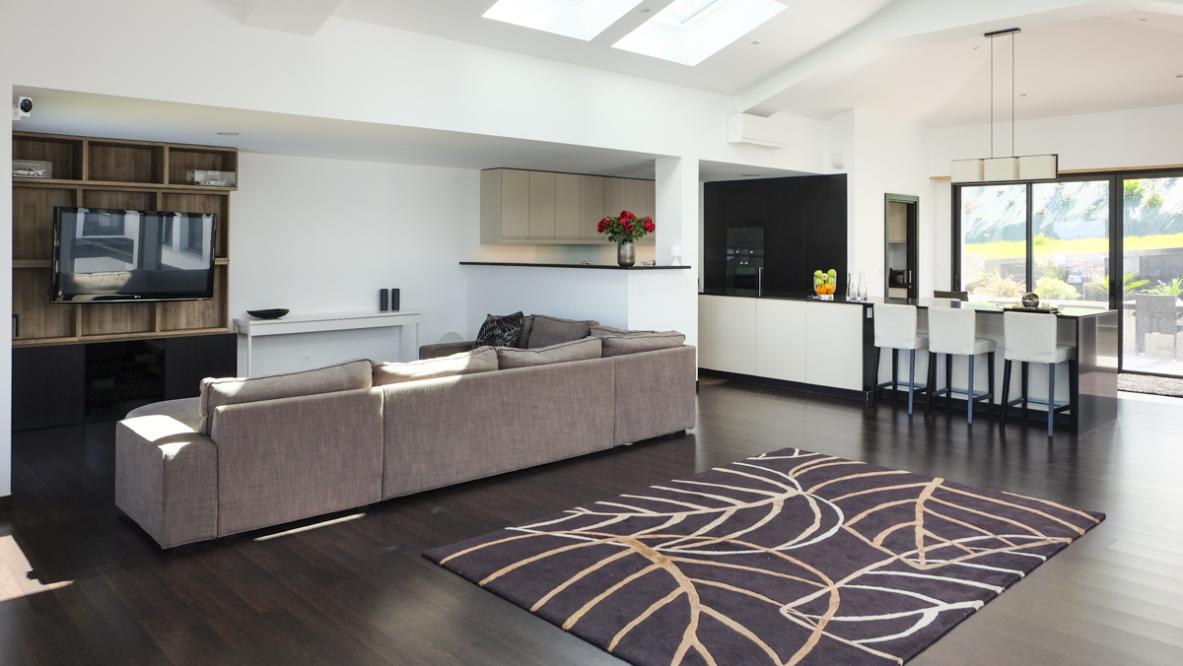 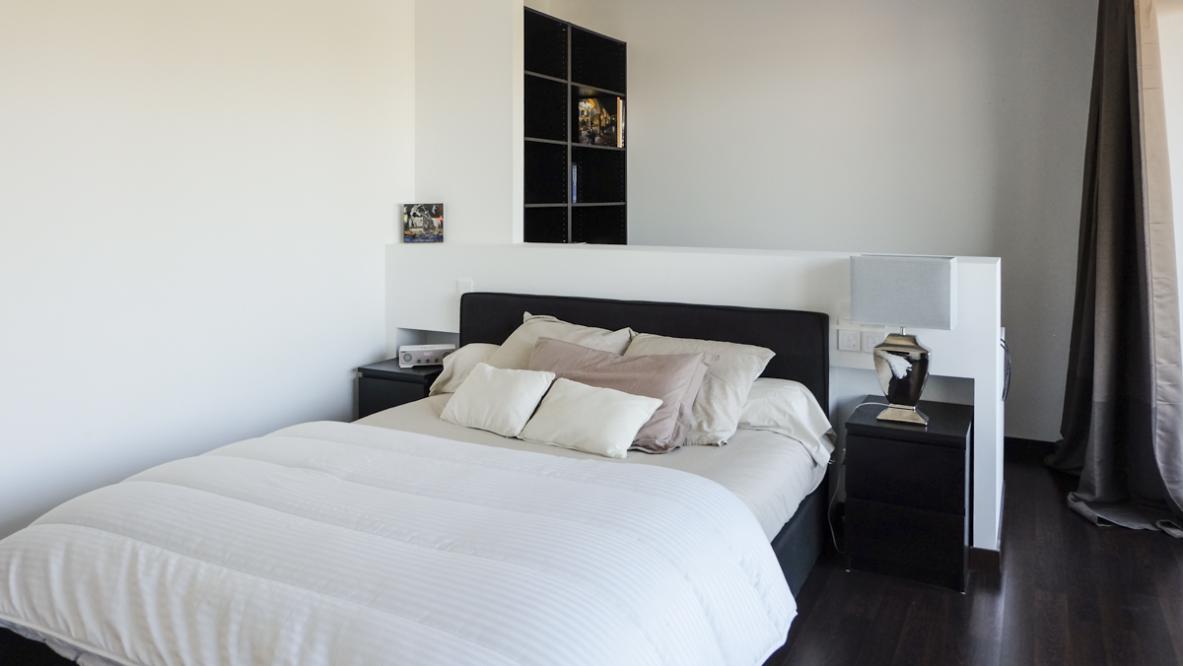 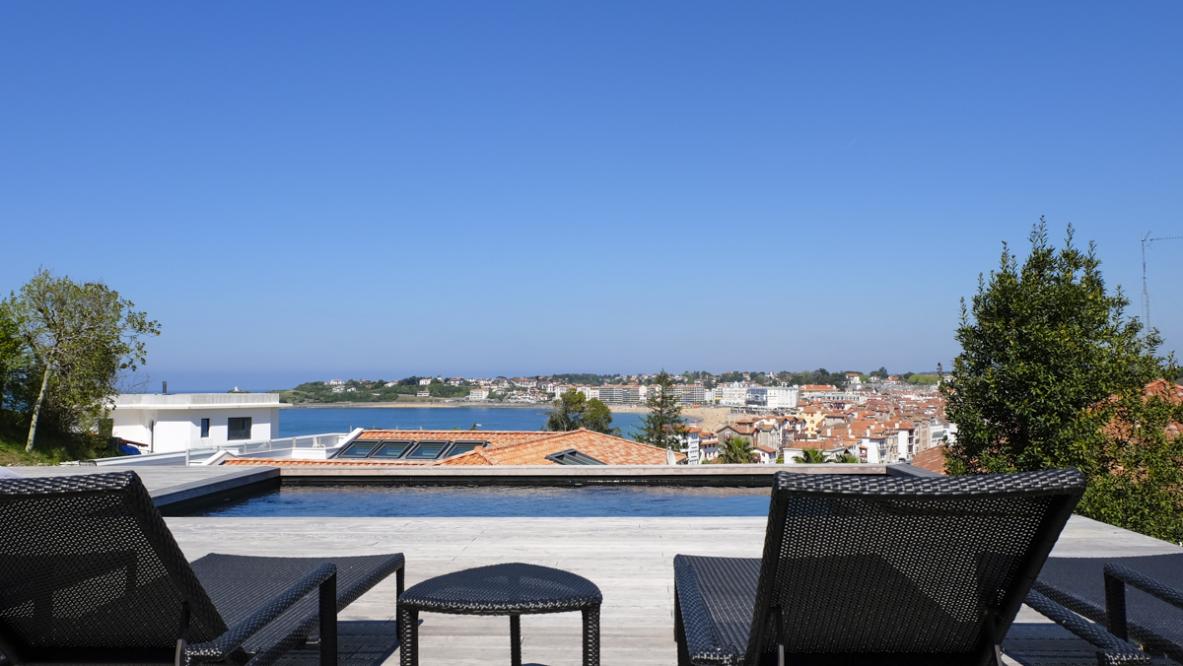 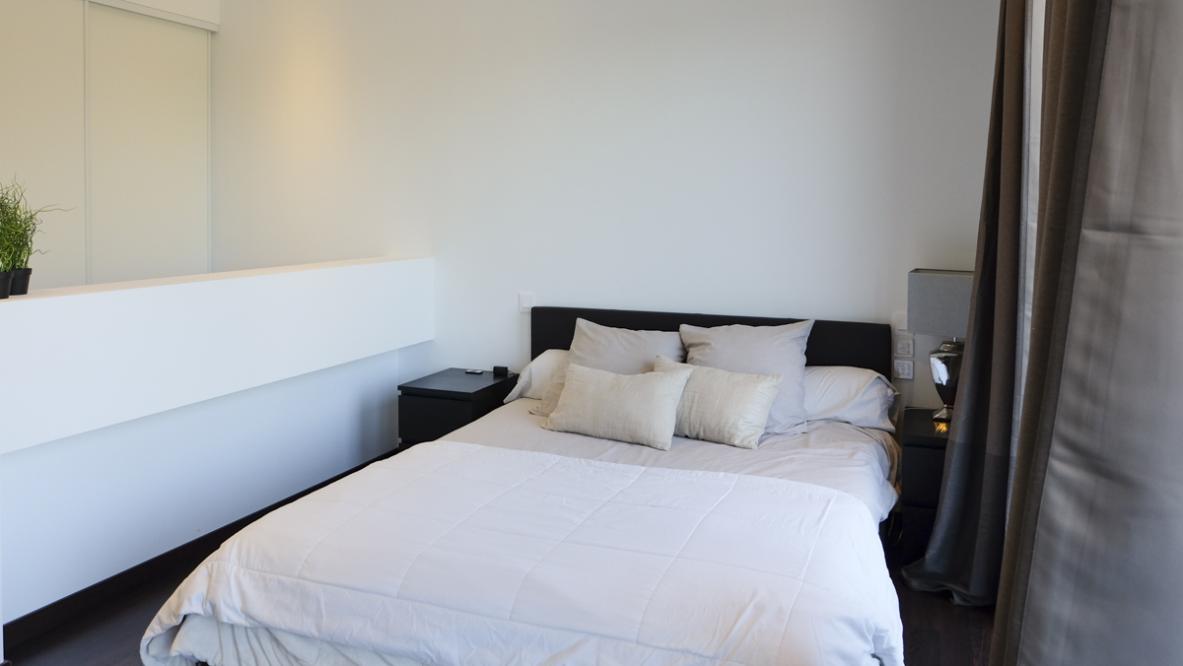 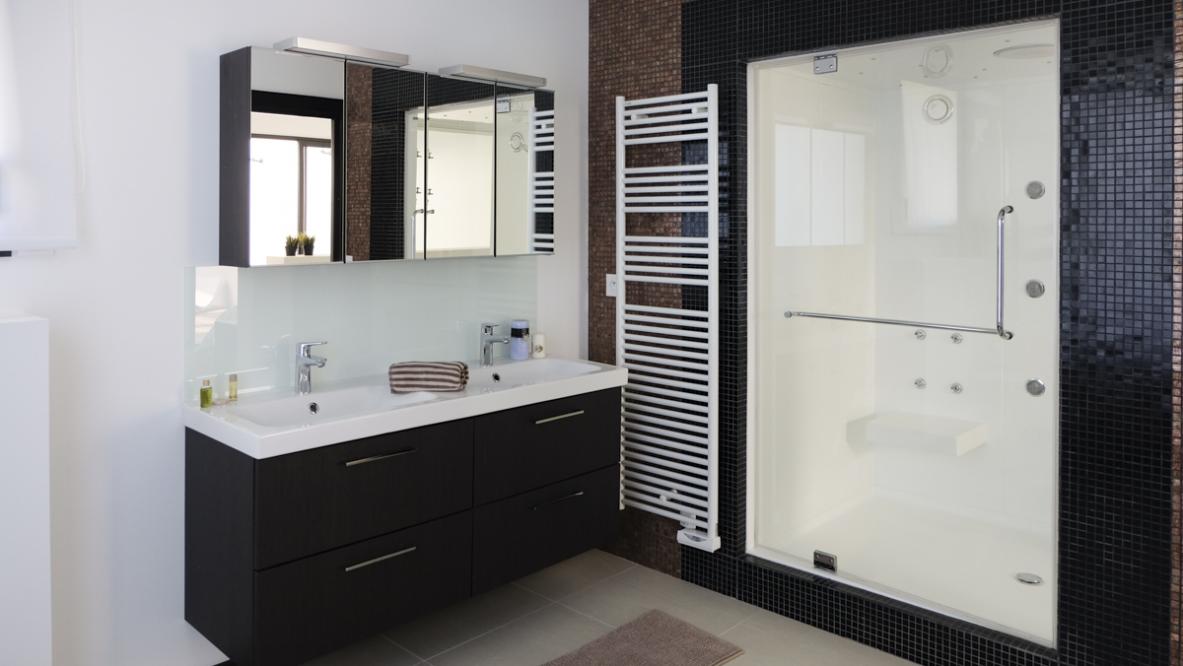 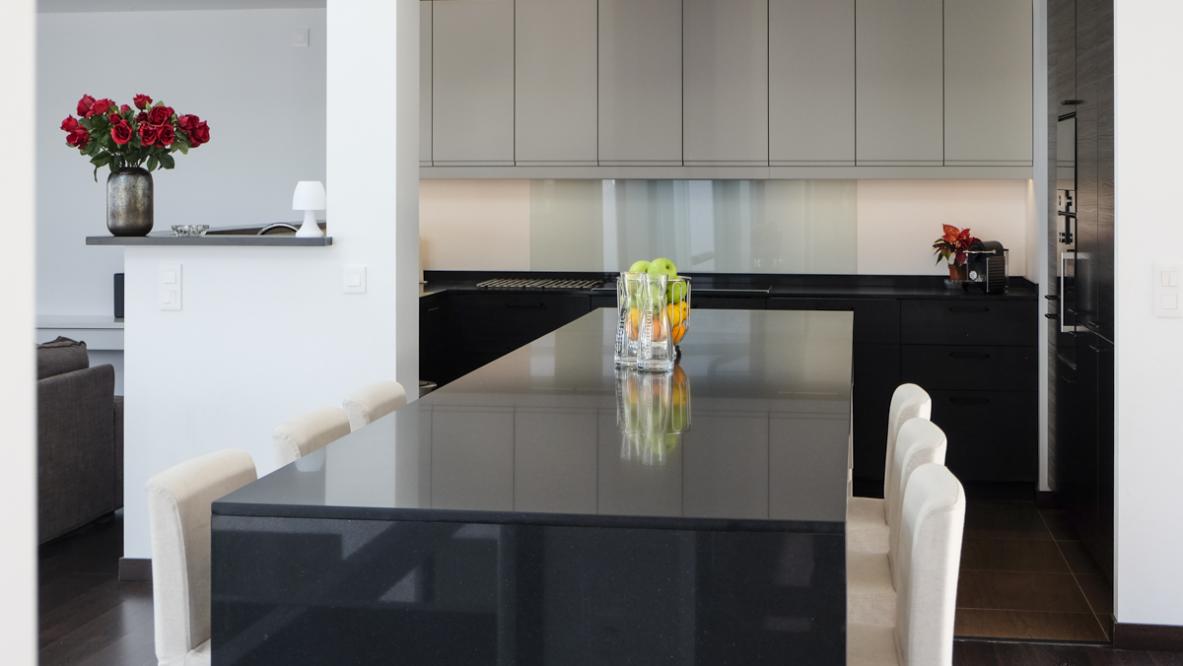 There is an abundance of light and space in this magnificent villa which has been beautifully renovated with reminders of the Art Deco style so typical of the F...

There is an abundance of light and space in this magnificent villa which has been beautifully renovated with reminders of the Art Deco style so typical of the French Basque country. Villa du Ciel exudes sumptuousness and comfort with its luxurious furnishings, stylish artwork, pools and terraces from which the ocean can be admired.

The residence is built on four levels with a lift to take you from the rooftop Jacuzzi to the home cinema, courtyard pool, bedrooms and large living area and terrace on the other floors. It’s perfect for a group of twelve as well as providing plenty of space and refuge for those who need to get away from the crowd for a while, with five of its six bedrooms surrounding a courtyard with a pool. A further swimming pool is yours to enjoy in the vast gardens.

Enjoy spectacular vistas from the roof terrace across Ciboure and St Jean de Luz towards the Atlantic, over which the sun is sure to set each night. On a clear night immerse yourself in the Jacuzzi with a glass of Irouléguy wine, look up at the sky to be reminded of how brightly the stars shine when you are on holiday.

Walk down to charming Ciboure and take your time to visit the old town with its stone and timber-framed houses, wander along the pretty fishing port, look at the brightly coloured boats and Pavlovsky lighthouse before finding a picturesque café, bar or restaurant.

Cross over the river to nearby St Jean de Luz with its family-friendly activities, La Grande Plage, golf courses and more. Keen walkers can follow the magnificent coastal path all the way down to Hendaye on the Spanish border whilst to the north there are some of this coastline’s most famous surfing beaches from Bidart to Biarritz.

The glamour of beautiful and glitzy Biarritz is only a half-an-hour drive away or you may simply prefer to discover some of France’s Plus Beaux Villages inland such as Ainhoa with its pretty Basque houses and Sare, where you can take a wooden train up to the summit of La Rhune. With its majestic mountains and dazzling coastline, this part of south-western France is a wonderful region to explore.

Villa du Ciel is situated on a hillside residential road in a historical area of Ciboure but very ne...

Villa du Ciel is situated on a hillside residential road in a historical area of Ciboure but very near its fishing port, shops and restaurants. Ciboure is sometimes described as the quieter “twin” of its livelier northern neighbour, St Jean de Luz, to which it is joined by a road bridge and separated by a harbour. Situated in south-western France, close to the border with Spain, both towns are sheltered by the natural bay.

The artist Matisse lived in Ciboure during the spring of 1940, just a few metres from the famous harbour home of composer Ravel who was born here in 1875. The lovely Quai Maurice Ravel is best viewed from the harbor of St Jean de Luz and remains a source of inspiration for many painters and photographers.

Ciboure has its own distinctive and relaxing atmosphere so take your time to visit the old town with its stone and timber-framed houses, wander along the pretty fishing port, admire the brightly coloured boats and Pavlovsky Art Deco lighthouse before finding a picturesque café, bar or restaurant.

Visit the Fort de Socoa (3km) and climb the circular tower or head straight to its beach where you’ll find water-based activities such as diving, paddle-boarding, catamarans, water skiing and more. Keen walkers will love the Basque Corniche, the magnificent path which follows coves and jagged cliffs all the way from Ciboure to Hendaye (11km) on the Spanish border.

Just a short walk from your villa is the imposing Church of Saint-Vincent, dating from the 16th century with unusual octagonal bell tower, magnificent altarpiece, many wall paintings, and the three rows of wooden balconies that are a common feature of Basque churches.

Cross the river to St Jean de Luz to view another typical church of the region, Église Saint - Jean Baptiste (2.1km) and admire the boat hanging from the ceiling representing the special relationship between the town and the ocean.

The pretty seaside town of St Jean de Luz (1.6km) was originally a small fishing port but later became a fashionable resort for well-to-do French, English and Spanish tourists in the late 19th century. Explore the pretty streets filled with shops and restaurants before heading down to the port, known for its tuna, anchovies and sardines. The town’s beach, La Grande Plage (4km), is a lovely place to spend the afternoon, especially with children. Across the town there are lots of family-friendly activities such as trampoline parks, mini golf and a road-train along the coast to beaches featuring playgrounds and games.

The waves are gentler here than further north so the area is the ideal place for those budding surfers to learn whilst experienced surfers will enjoy the impressive breakers at Acotz (8km). Further north, head to the surfing hang-outs of Guéthary (9.5km) and Bidart (12km) where you can ride the waves amongst some of the world’s finest surfers or just sit back and take in the magnificent beaches and landscapes.

This region is also a paradise for golfers with this area having two beautiful golf-courses, the nearest one being only 2km away with many others nearer Biarritz, including the prestigious Chiberta Golf Course (24km) with its stunning situation near the Anglet beaches.

Glamourous Biarritz is only 23km away, an elegant seaside resort dating back to the 19th century when aristocracy built their summer residences along this part of the coast. Dine in excellent restaurants along the beach, sip cocktails in trendy bars or shop in the wonderful Les Halles market full of Basque specialities to take home and cook.

Lovers of water sports should head down to the coast and try out a variety of water-based activities...

Lovers of water sports should head down to the coast and try out a variety of water-based activities in Ciboure where you can find diving, catamarans, paddle boarding, water-skis and more. Horse lovers will find riding stables nearby.

This region is a mecca for enthusiastic surfers from around the world, so you’ll never be far from a surf school for beginners of all ages, including children. The beaches further north, including

Acotz (8km), Guéthary (9.5km), and around Biarritz are renowned for their excellent surf.

In St Jean de Luz (1.6km) there are plenty of family-friendly activities such as trampoline parks, mini golf and a road-train to beautiful sandy beaches featuring playgrounds and games.

The Basque region’s largest adventure park is situated 9km from Villa du Ciel. Oihana Adventure Park is suitable for children over the age of 6 years, with adventure playground and dynamic treetop courses and giant zip wires for older children. They also offer Paintball here for the more gung-ho!

The main beach in Hendaye (11km) near the Spanish border is also very family orientated, with beach clubs for children, plenty of ice cream stalls, washrooms and tent hire.

Real train lovers should head to the inland village of Sare (15.3km) to catch the old wooden train up to the summit of La Rhune mountain where you will be greeted with spectacular views of the Pyrénées and the coast on a clear day.

- 9 hours of maid service per week