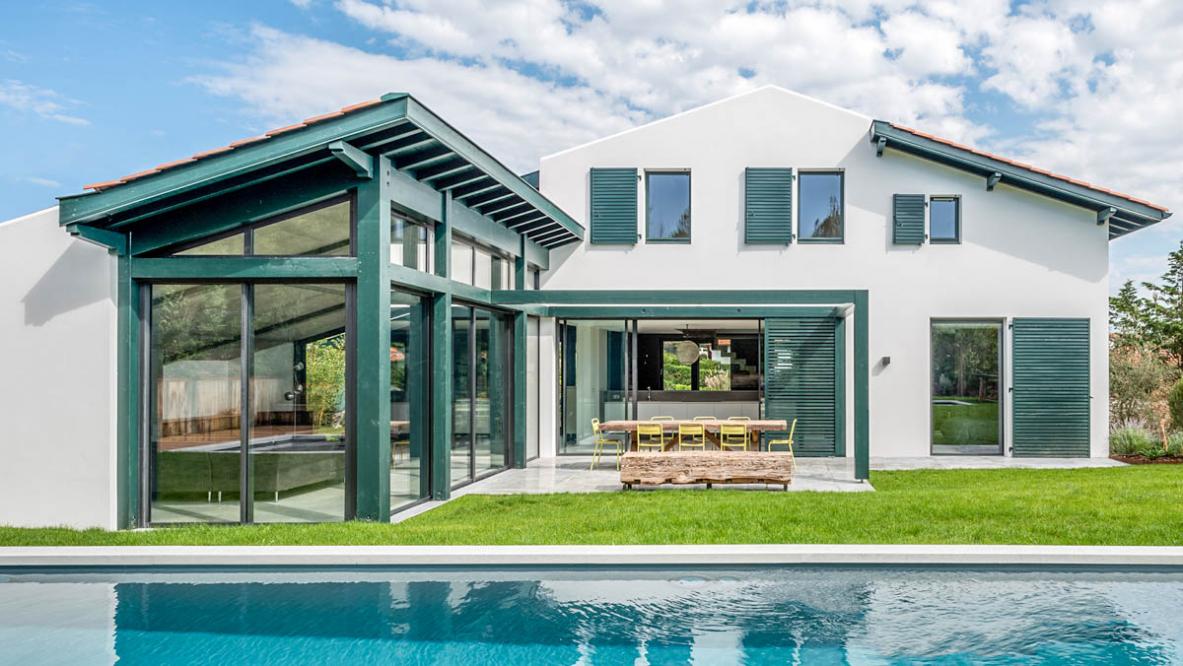 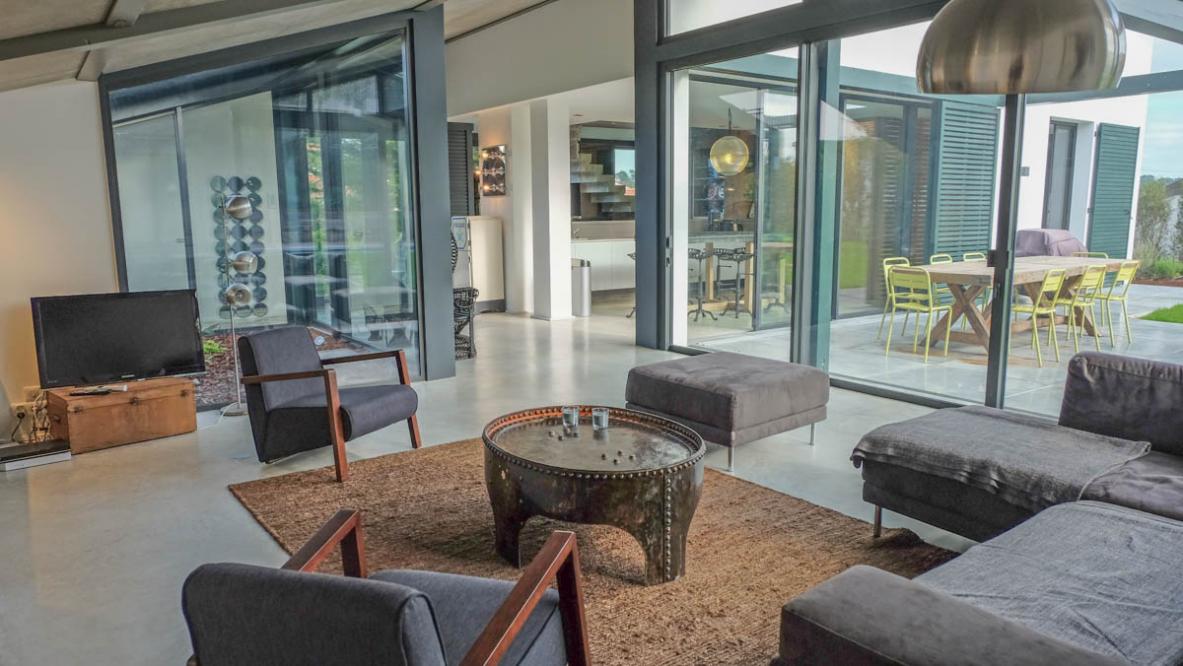 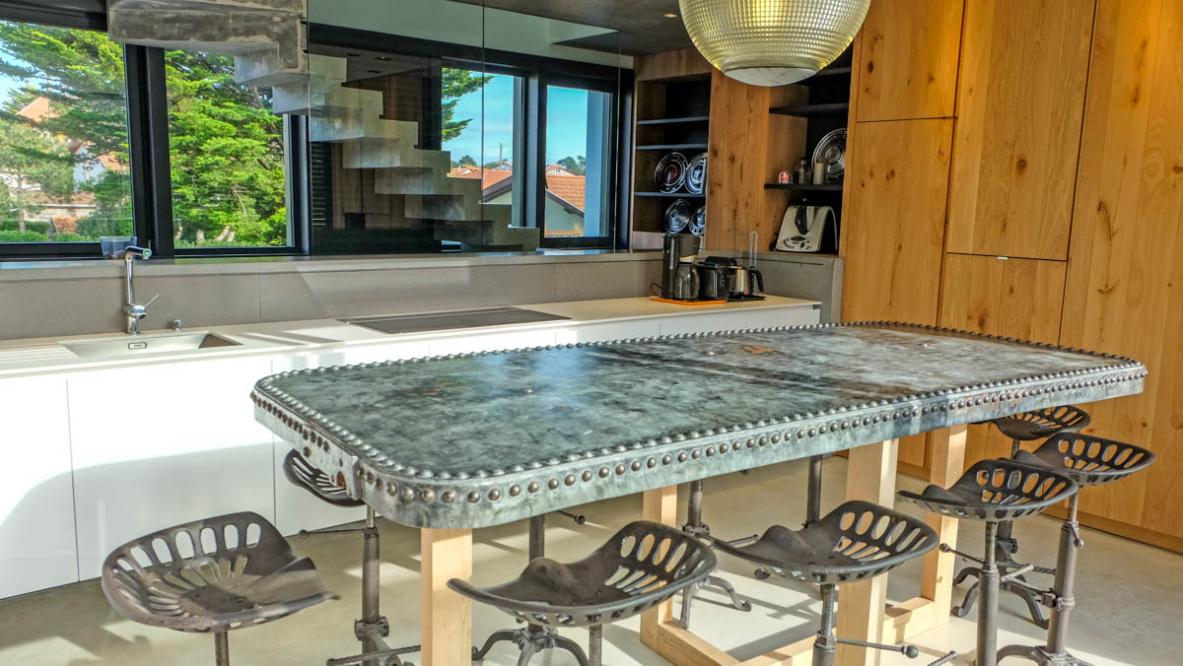 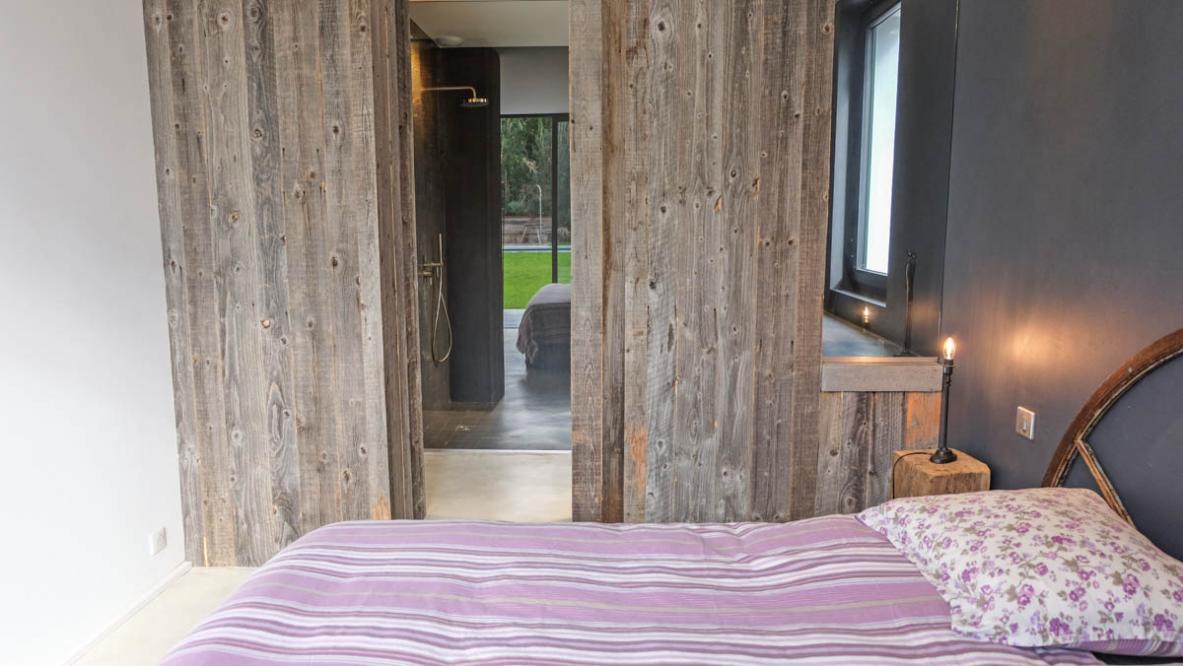 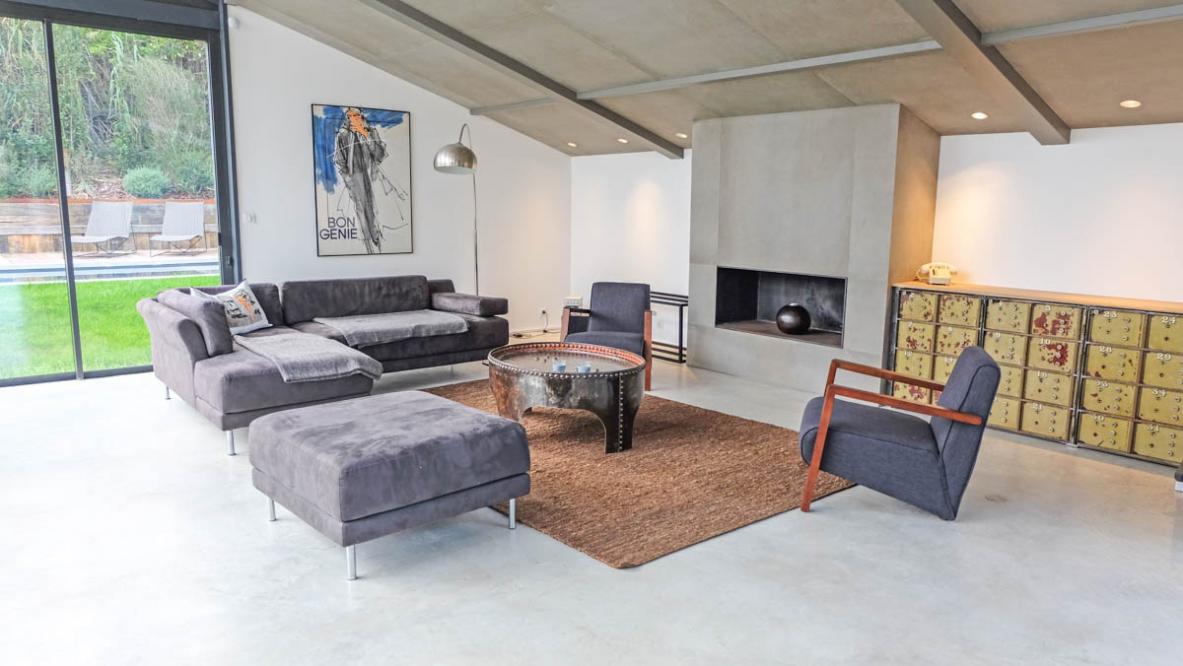 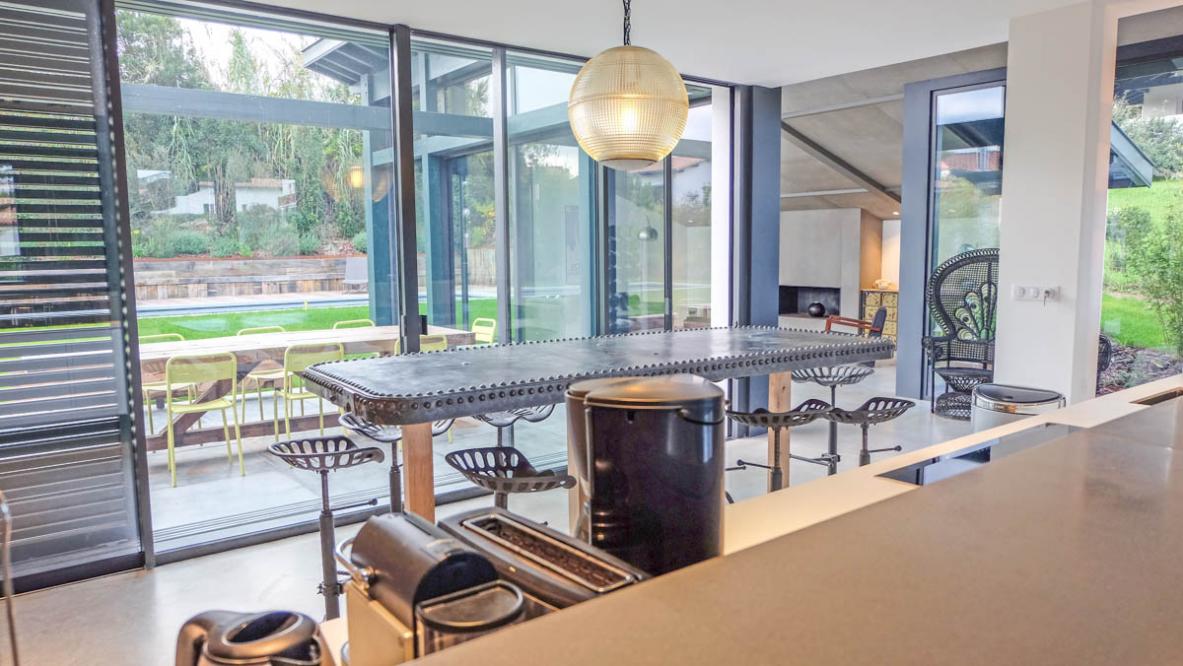 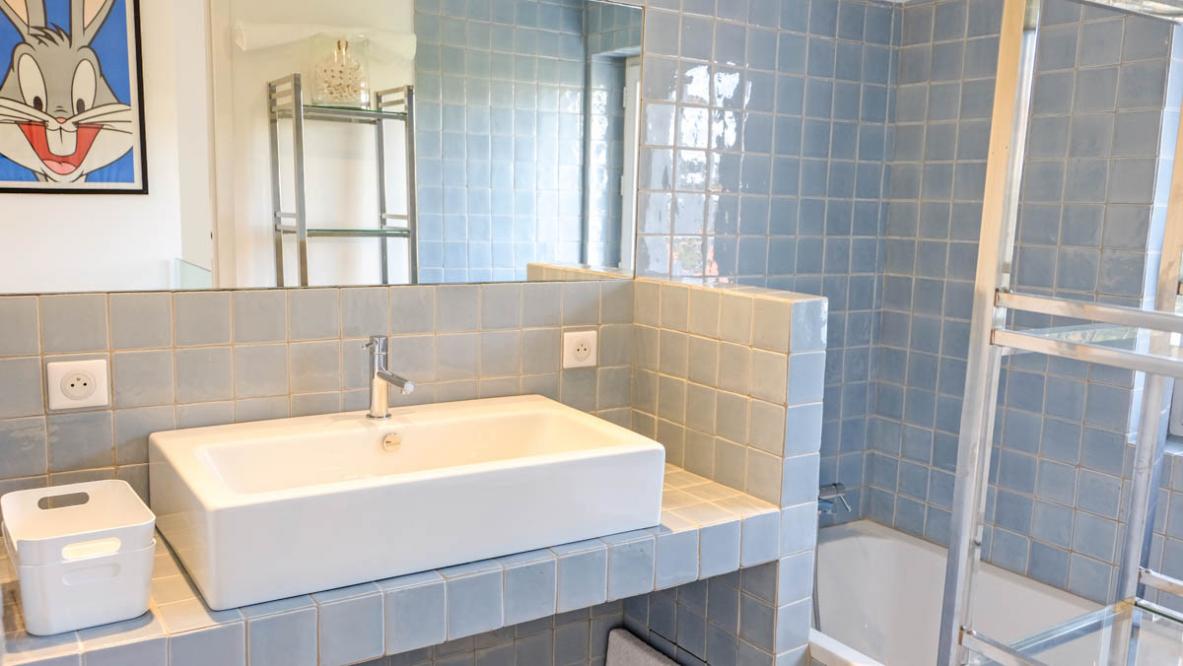 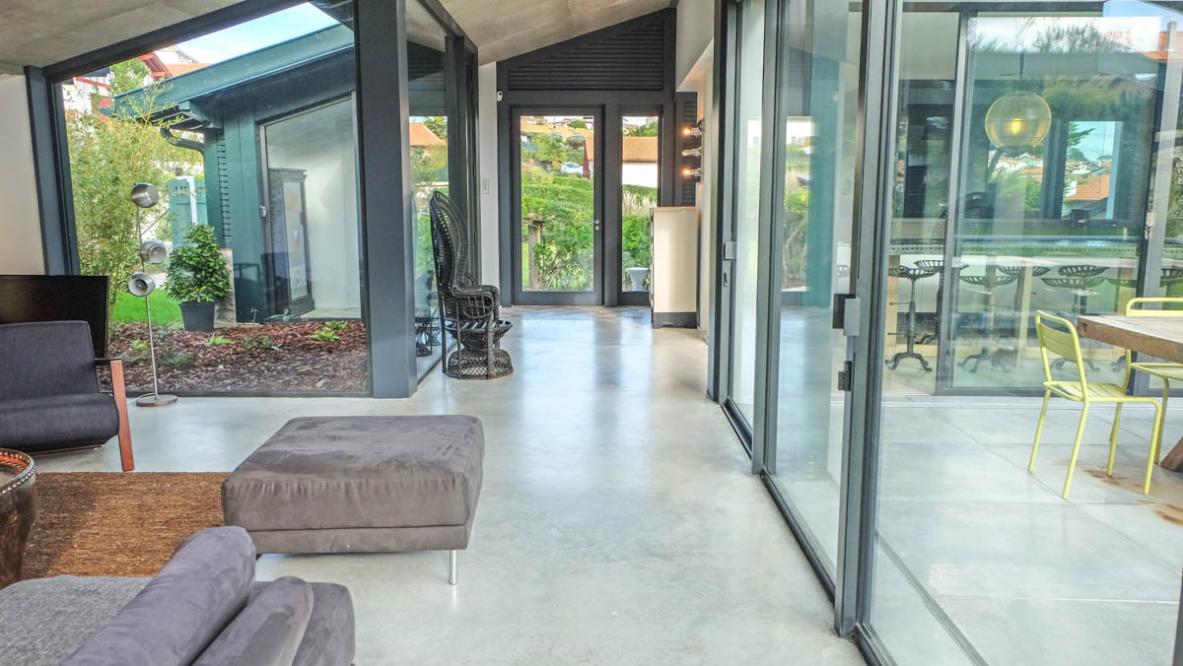 Situated just metres from the cool waters of the Atlantic, along the stunning Basque coast, only 10km south of Biarritz, Les Volets is a stunning contemporary h...

Situated just metres from the cool waters of the Atlantic, along the stunning Basque coast, only 10km south of Biarritz, Les Volets is a stunning contemporary home, with striking architectural design throughout. In the beautiful Basque town of Bidart, with world-famous surf almost lapping at your door, its location is second-to-none.

This very special abode offers guests spectacular and modernist design features across its two floors. The glass panelled walls encompassing most of the villa drench the rooms with natural light, and open up onto the lovely terrace area, extending that all important outdoor-indoor experience. A beautiful living area and large stylish kitchen, bathed in calming muted tones and sleek finishes, are fantastic spaces in which to entertain.

The villa sleeps eight guests in four stunning bedrooms, all offering high spec modern décor. You’ll find the master bedroom with ensuite on the ground floor, whilst three further doubles can be found on the first floor.

In the hot afternoon, cool off in the refreshing pool, or simply enjoy the many hours of sunshine this area of France offers, reading your favourite book on one of the loungers.

The shaded terrace is the perfect spot to enjoy some al fresco dining during your stay at Les Volets. Take advantage of the balmy evenings with the Plancha BBQ and cook up some local specialities for your family or guests to enjoy with regional wines and chat late into the night. A sizeable rustic trestle table accommodates a large group, with a manicured lawn for children to play on.

If you can tear yourself away from this chic retreat, you’ll only have to venture a few minutes down the hill to find yourself dipping your toes into glistening waters or building sandcastles. In fact, across this Basque coastline there are over 6km of beaches to choose from, ranging from family friendly to action-packed (think surfing on clean-breaking waves).

With a bustling Basque coastal town on your doorstep and more activities from golf, hiking, horse riding and tennis right on your doorstep, you’re spoilt for choice at Les Volets.

In this beautiful part of the Pyrénées-Atlantiques, you are in the traditional Basque village of B...

In this beautiful part of the Pyrénées-Atlantiques, you are in the traditional Basque village of Bidart with restaurants close by and the heart of the village within walking distance as you follow the road up the hill. It’s also just a short walk down the hill to the beach and just 10km further is the hustle and bustle of vibrant Biarritz.

Full of character, as well as plenty of shops and quaint restaurants bursting with traditional delights, Bidart boasts six spectacular beaches, equipped to serve surf enthusiasts and beach bums alike. There are so many wonderful beaches along this fantastic coastline, some backed by dramatic cliffs, and others wide-open stretches of golden sand.

Notable spots include the family-friendly Central Beach and further north in Biarritz La Plage de la Cote des Basques which has become a favourite for surfers. Indeed, this area has become a surfing mecca, with enthusiasts from all over the world attracted to this part of the Basque coastline and plenty of surfing schools for abilities and all ages.

For more hustle and bustle Biarritz is an elegant seaside resort dating back to the 19th century when aristocracy built their summer residences along this part of the coast, including the well-known Hotel du Palais, built by the wife of Napoleon III on the famous La Grande Plage. You will find some wonderful restaurants in the Port des Pecheurs, the former fishing port, where you can buy delicious fresh seafood. Food lovers shouldn’t miss the fantastic market at the Halles de Biarritz offering many wonderful Basque specialities. Another one of the town’s highlights is the incredible Rocher of the Vierge peninsular, which can be visited via the Eiffel bridge that connects it to the mainland or the fascinating lighthouse in the northern part of the town where there are some breathtaking views.

Other fabulous coastal areas to visit include the picturesque town of Ciboure (10km) to the south where Matisse once lived and the lovely resort of Saint-Jean-de-Luz (9km) with a great sandy beach and plenty of family-friendly activities as well as an abundance of golf courses and lovely walks along the surrounding coastline and hills.

For a change of scenery, venture inland to explore some traditional Basque villages, such as two of France’s Plus Beaux Villages; pretty Ainhoa (22km) and Sare (20km), where you can take the old wooden train up to the summit of La Rhune, one of the most dominant peaks of the Pyrénées, where there are some restaurants with spectacular views as well as some keen hiking opportunities. Hiking in this area is second to none, if you’re lucky you’ll even stumble across local shepherds as they tend to their flocks.

Indeed, this whole region offers an extended range of outdoor activities, such as walking, horse-back riding, fishing, golf, cycling, canoeing and many others including water-sports along the coast.

The stretch of coastline around Biarritz, Bidart and Guéthary includes many wonderful beaches suita...

The stretch of coastline around Biarritz, Bidart and Guéthary includes many wonderful beaches suitable for families.

Central beach just moments from the villa has a great kids club in the summer. Parlementia beach in Guéthary is a great spot for building sandcastles whilst La Grande Plage in the heart of the Biarritz is a vibrant playground for any youngster. But there are also smaller beaches such as Plage Milady (with a promenade, playground and nearby museum Cité de l'Océan) and Cotes des Basques, which has also become an essential destination for surfers. This entire area is a mecca for surfers from around the globe, so you’ll never be far from a surf school for beginners of all ages, including children.

A great little activity in the heart of Biarritz, is a little road-train you can take along the coast for a more leisurely way to see the town’s coast, whilst if you’re looking to burn off some energy head north to the lighthouse and climb the 200 or so steps to be rewarded with some stunning views.

The Basque region’s biggest adventure park is situated 18km from the villa. A great day out, Oihana Adventure Park is suitable for children from 6 years and up, with dynamic treetop courses for older children. They also offer Paintball for ‘kidults’ with energy to burn.

Driving south to St-Jean-de-Luz (9km) you’ll find plenty of family-friendly activities such as trampoline parks, mini golf and another road train to beautiful sandy beaches featuring playgrounds and games. Additionally, the surf here is gentler than further north, so an ideal place for budding surfers to learn.

Real train lovers should head to the inland village of Sare (20km) to catch the old wooden train up to the summit of La Rhune mountain where you are greeted with spectacular views of the Pyrénées and ­– on a clear day – the beautiful coastline.

- 3 hours of maid service per week

Ask a question about Les Volets