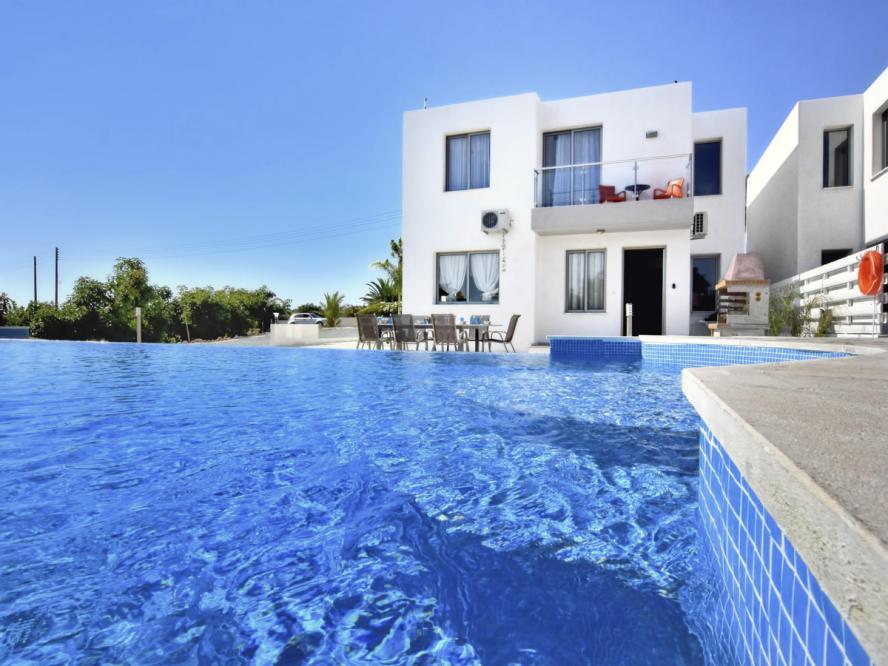 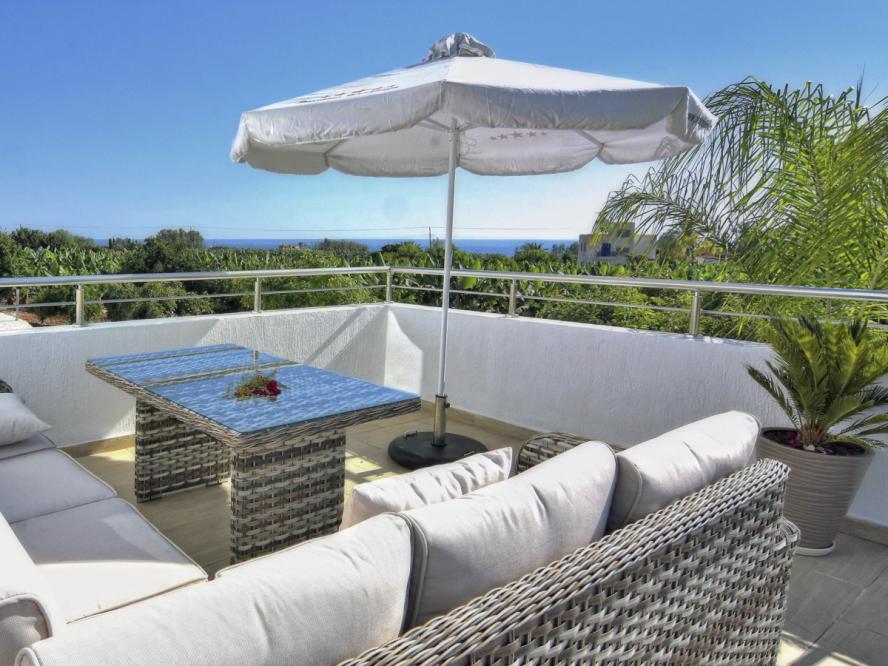 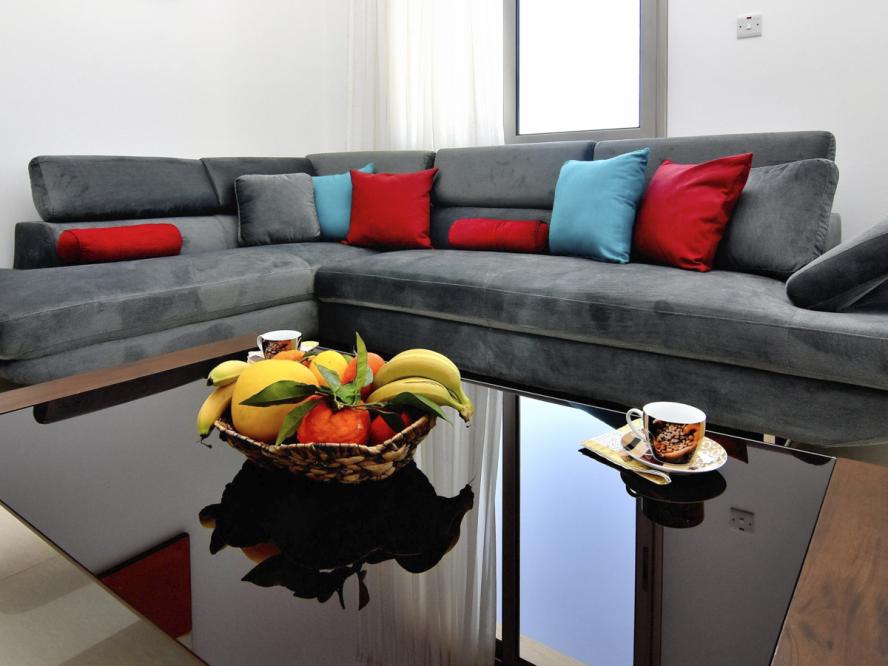 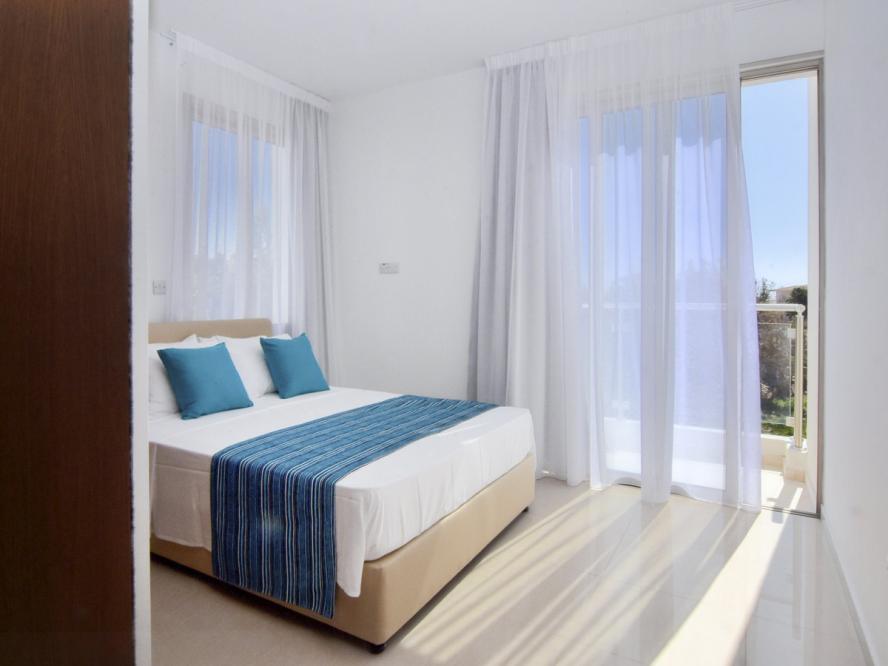 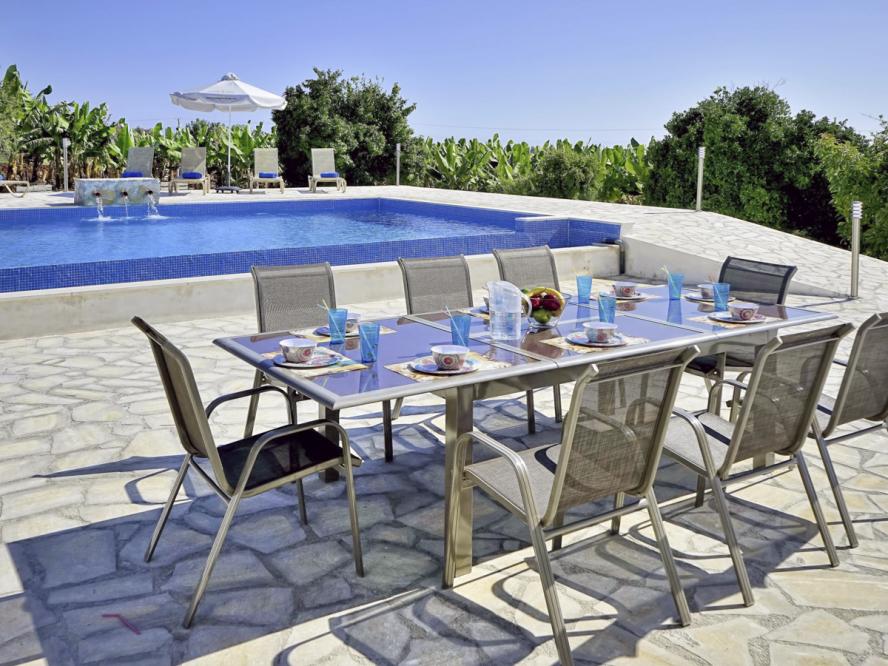 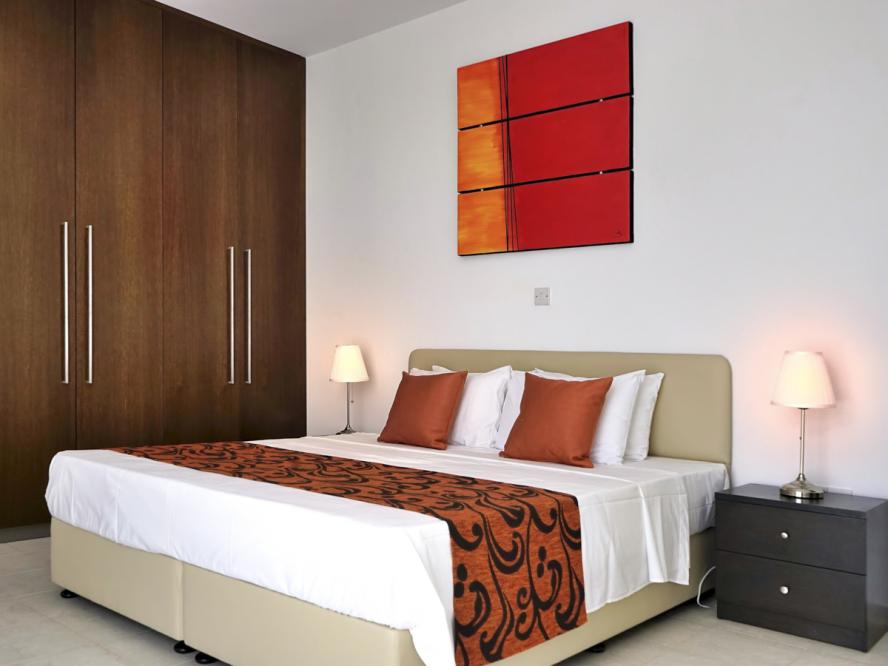 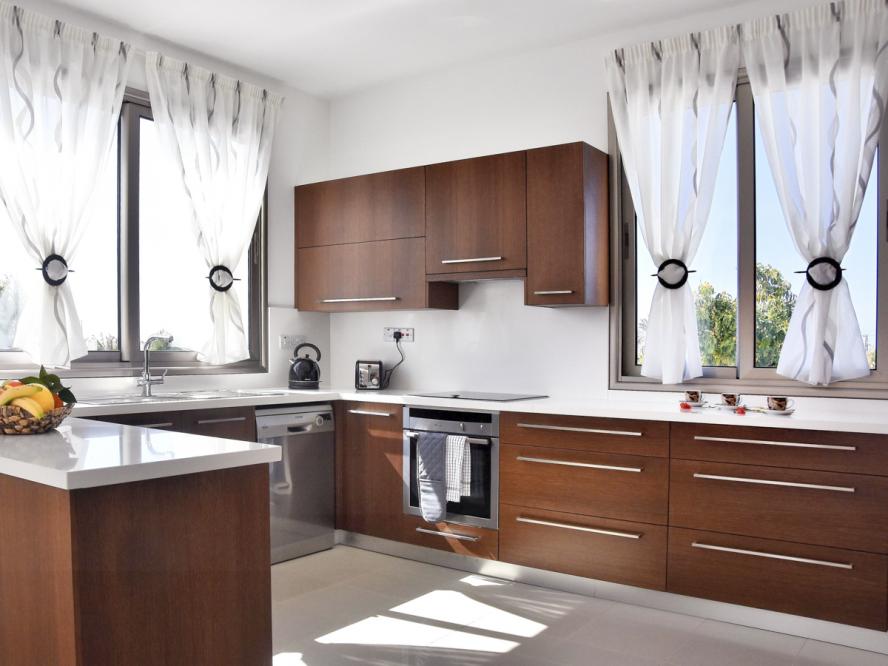 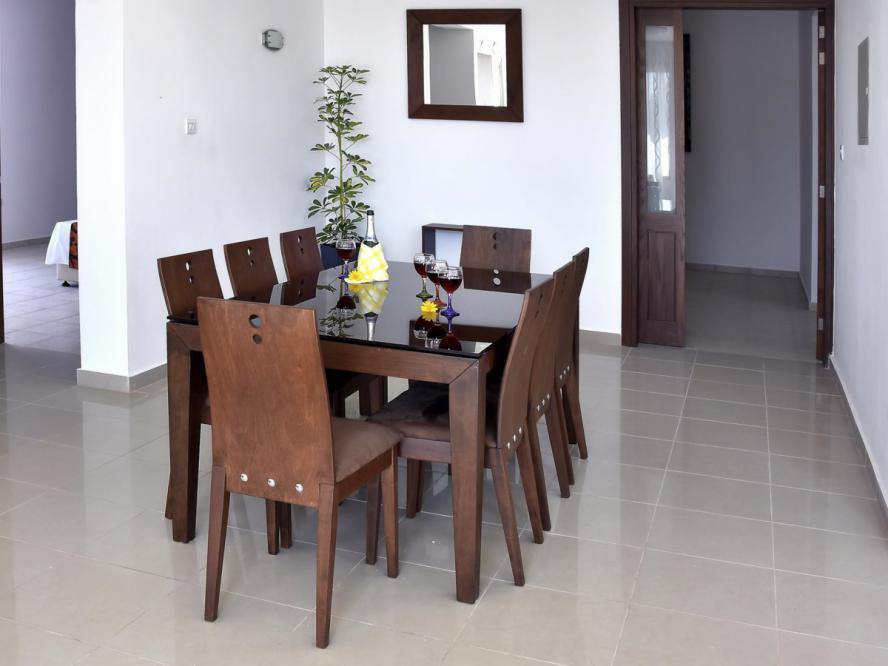 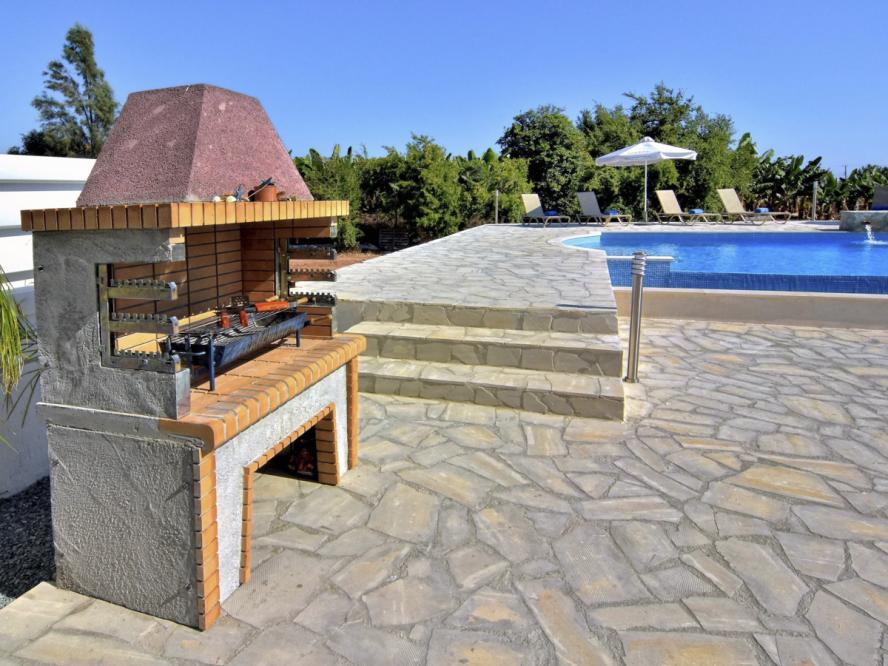 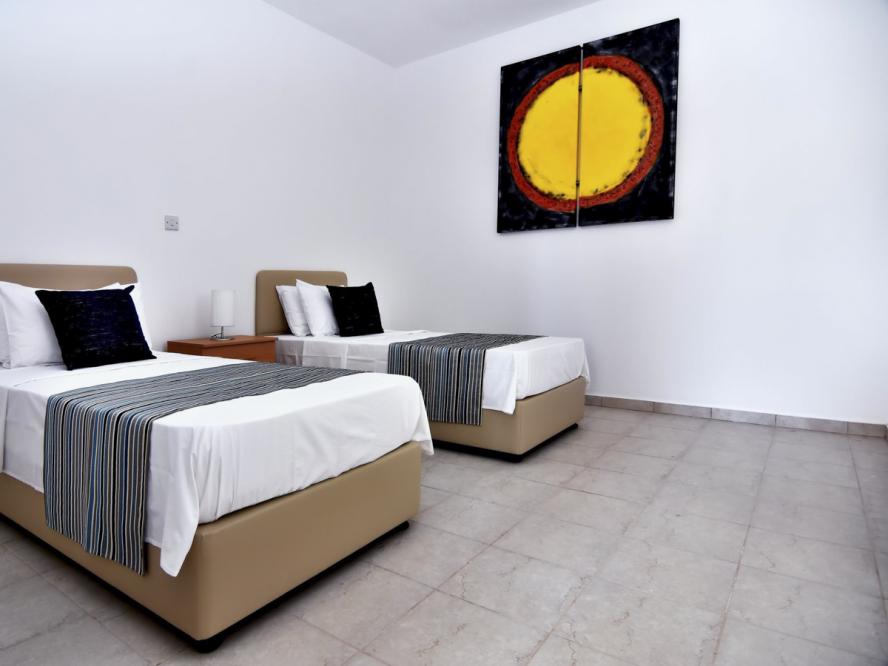 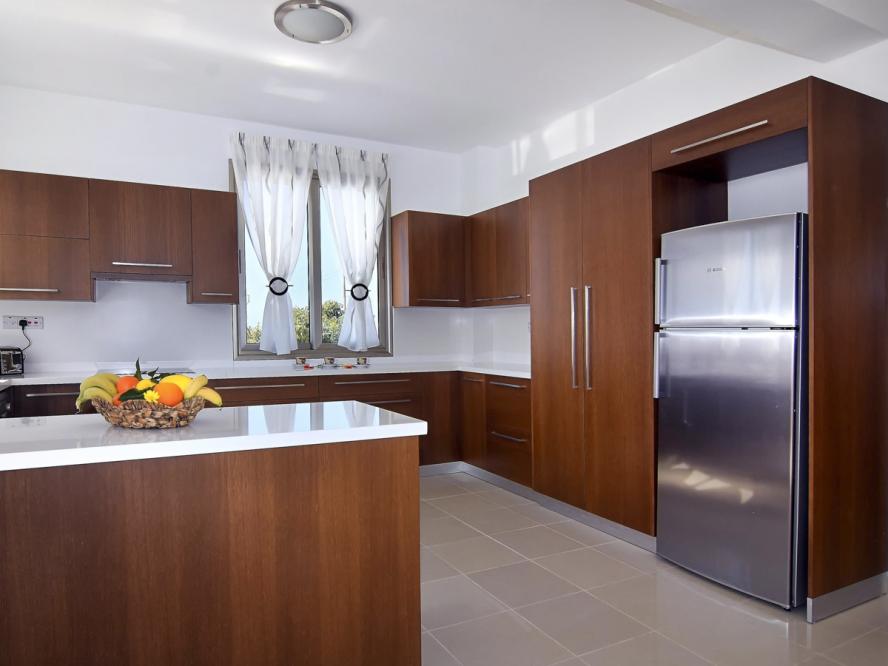 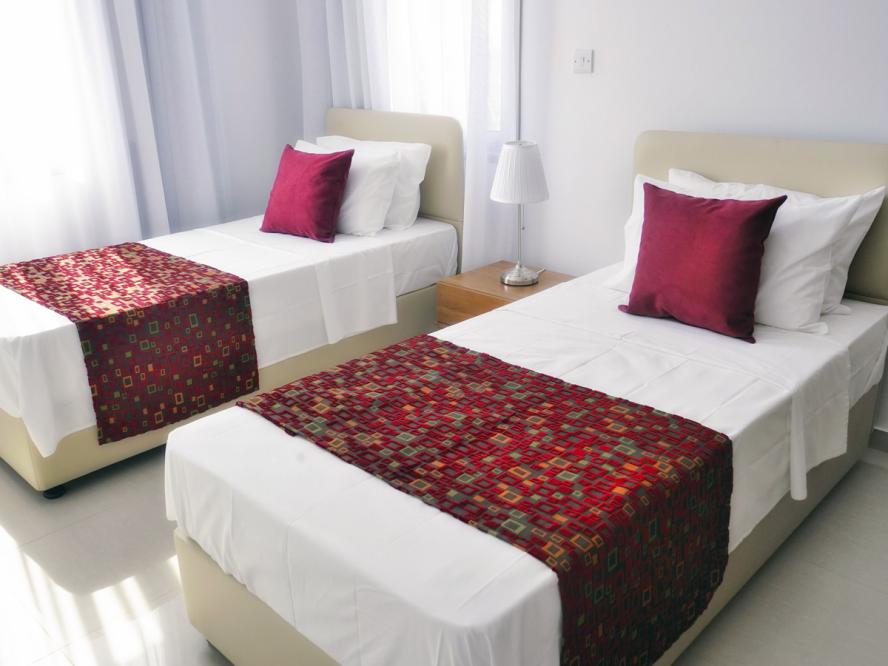 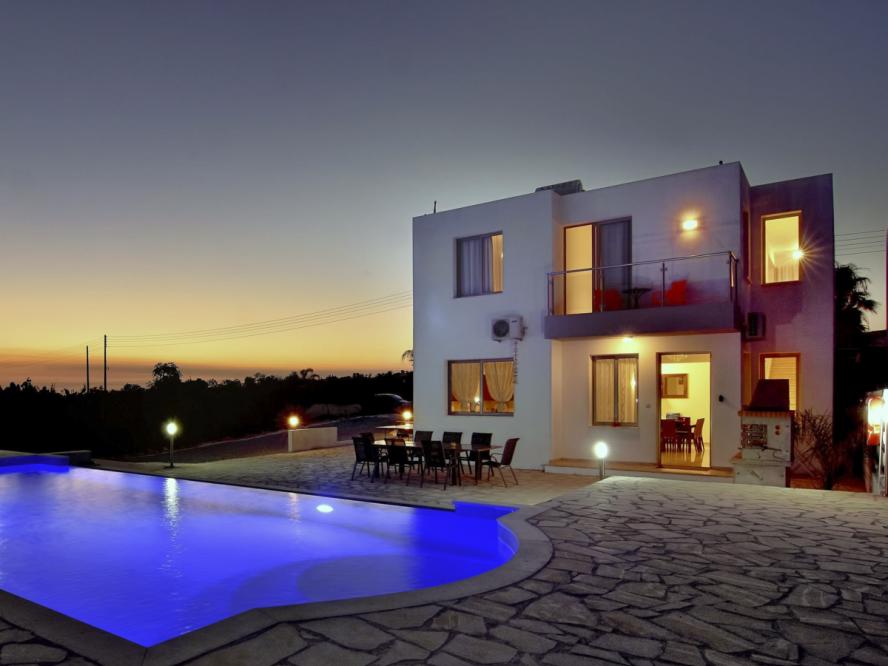 Surrounded by forestry, Villa Diora has a pristine, keyhole shaped pool and is made up of modern grid style architecture. This tranquil Paphos villa was built i...

Book by the 31st of January and get:
- VIP Airport Lounge Passes
- Welcome Hamper
- Up to £100 off a Private Chef Meal
T&Cs apply

Surrounded by forestry, Villa Diora has a pristine, keyhole shaped pool and is made up of modern grid style architecture. This tranquil Paphos villa was built in 2016, so everything is brand new and fresh. A natural stone terrace encompasses the pool, where you can relax on the wooden sun loungers. Stone steps lead down into the invigorating water - when the sun goes down, enjoy the stunning vistas transform the sky from the pool. Play a game of table tennis together - but see if you can keep the ball out of the swimming pool!

Dine alfresco on the terrace around the table. Barbecue enthusiasts will definitely enjoy using the traditional brick and stone grill - why not rustle up some barbecued Cypriot halloumi skewers for everyone. On the terrace there is an additional lounge area, where guests can make the most of the fresh Mediterranean air and relax on comfortable rattan sofas, shaded by an umbrella.

There are four bedrooms that can sleep up to eight guests, with two doubles and two twin rooms. Each of the rooms has crisp linen with a pop of colour, including burnt orange, teal or crimson. Rich patterned blankets and fresh modern art adds character. Towering wooden wardrobes provide plenty of space for those who like to bring lots of options! Floor-to-ceiling windows make sure everything is bright and airy. Some rooms have their very own private balcony where they can gaze out at the dreamy views over Coral Bay.

The interiors are decorated in a mixture of edgy white and mahogany wood, with glossy worktops and coffee tables. A velvety corner sofa for curling up in are scattered with red and blue cushions, while this room has a satellite television and DVD player for unwinding. The kitchen has plenty of cupboard space and is generally well equipped for home cooking, with an oven and huge silver American style fridge. Floaty white curtains at the windows flutter in the breeze.

Villa Diora is a tranquil holiday home, with 4 bedrooms and it accommodates 8 people

Villa Diora is beautifully located in the Coral Bay area of Paphos - in fact, if you look down from ...

Villa Diora is beautifully located in the Coral Bay area of Paphos - in fact, if you look down from the villa, you will see the picturesque bay. Nestled in a peaceful spot between the Sea Caves and the fishing hamlet of St. George, the villa is close to all sorts of nature. Paphos is a fantastic spot to be located in, as it's full to the brim with relics of ancient mythology and history.

The Sea Caves are a series of rocky coves that are ideal for snorkelling and swimming in the crystal clear waters. Additionally walking across the top of the coastline is also fun, while this area is also popular with divers. For dining, there are a few heritage style tavernas and a cafe within a few minutes' drive, which provide the option to eat like a local and try some famous Cypriot cuisine.

Coral Bay, a horseshoe-shaped crescent of golden-hued sand is one of Cyprus' Blue Flag beaches. Impossibly blue water and with plenty of resort facilities, this beach has a lively buzz. Corallia beach is also very close by and is the quieter beach of the two, with a more local vibe and sparkling aquamarine sea. Many people come to Corfu to beach hop, so these would be a great place to start.

Paphos has plenty in the way of sightseeing, from the Tombs of the Kings to Aphrodite's Rock. The jaw-dropping underground tombs and chambers were once hidden under the desert-like landscape. Interestingly, the tombs were never for honouring royals, they were given the name because of how grand they are.

Cyprus is home to one of the oldest civilisations in the Mediterranean. With well-preserved tombs, Roman ruins and mosaics to discover, there's so much to see and do around Paphos.

Aphrodite's Rock is the spiritual home of the Greek goddess of love, who was born of the sea foam in Paphos. Swim around the rock three times and you will be blessed with eternal youth, good fortune, true love, beauty and fertility according to ancient lore. A word of warning: the sea here is rough! However, you can still get a great view of Aphrodite's Rock from Petra Tou Romiou beach.

The island is blessed with many natural wonders. Take a day trip to visit Larnaca Salt Lake, beloved by migrating birds and a dizzying array of shrimp. Made up of a combined four salt pans and home to charming flamingos, the salt pan features in Christian and Muslim stories. In summer, when the salt pan is completely dry, it stretches far across the horizon.

A holiday in Cyprus will be a dream come true for many children - exotic beaches, tasty food and ple...

A holiday in Cyprus will be a dream come true for many children - exotic beaches, tasty food and plenty of adventure is all on the cards. Villa Diora is a great place for them to relax and play in, especially the pool and the table tennis court.

For many kids, it's all about the beach days. Both Coral Bay and Corallia beach are ideal for kids, perfect for swimming in the sea and building sandcastles. At some beaches, children can take part in exciting watersports and snorkelling. A trip to the Sea Caves is also bound to impress - the view from the top is stunning!

In Paphos, make all of their aqua-based dreams come true at the Aphrodite Water Park. From exciting water slides to a wave surge pool and a lazy river, all placed within a natural landscape, this waterpark knows how to cater to families with children of all ages. Kids under three can enter for free, and there is a dedicated pool for very young children. There are stalls to buy drinks and snacks, so you could easily spend an entire day here.

Adventurous kids will love trying out Cypriot cuisine! With some familiar dishes like halloumi and hummus, they're bound to want to get involved. There are also plenty of Mediterranean and Western options within easy reach. Order them a meze plate to try small amounts of dishes, topped off with some sweet baklava.

Zephyros Adventure Park organises activities for older children, including mountain biking, kayaking in the sea, visiting tiny coves and seeing geological wonders. For hiking, there are jaw-dropping trails through pine forests, all with incredible scenery. And in the evening, for kids who haven't exhausted all their energy, there is a funfair called Parko Paliatso. Here you'll find theme park rides, traditional carousels and lots of carnival food.

Kids will love having a chance to witness flamingos and other birds in the wild at Larnaca Salt Lake - the vast expanse of salt will surely impress them!

Ask a question about Villa Diora