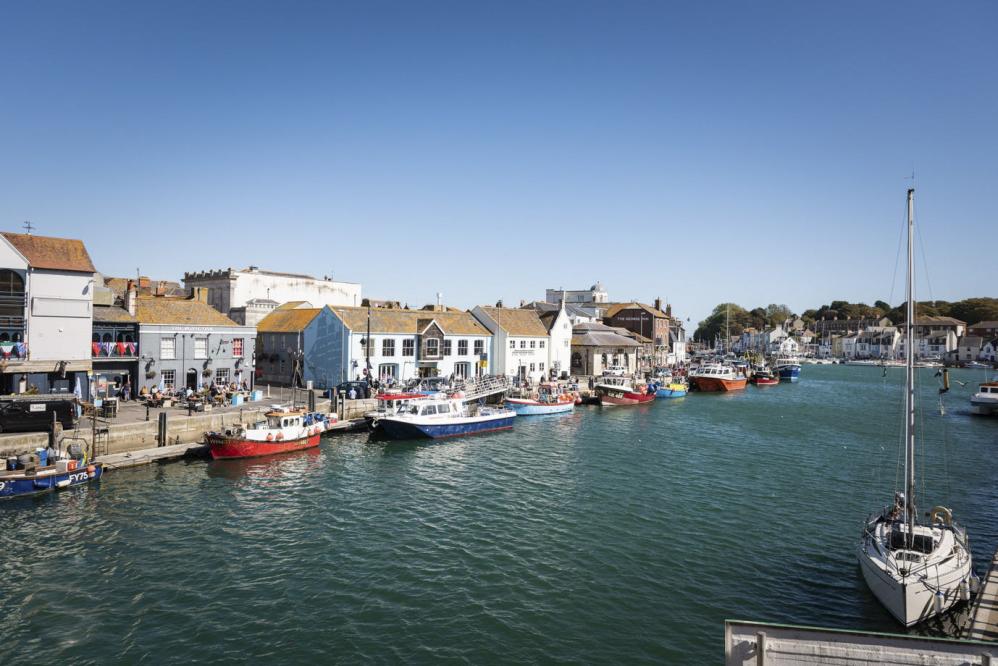 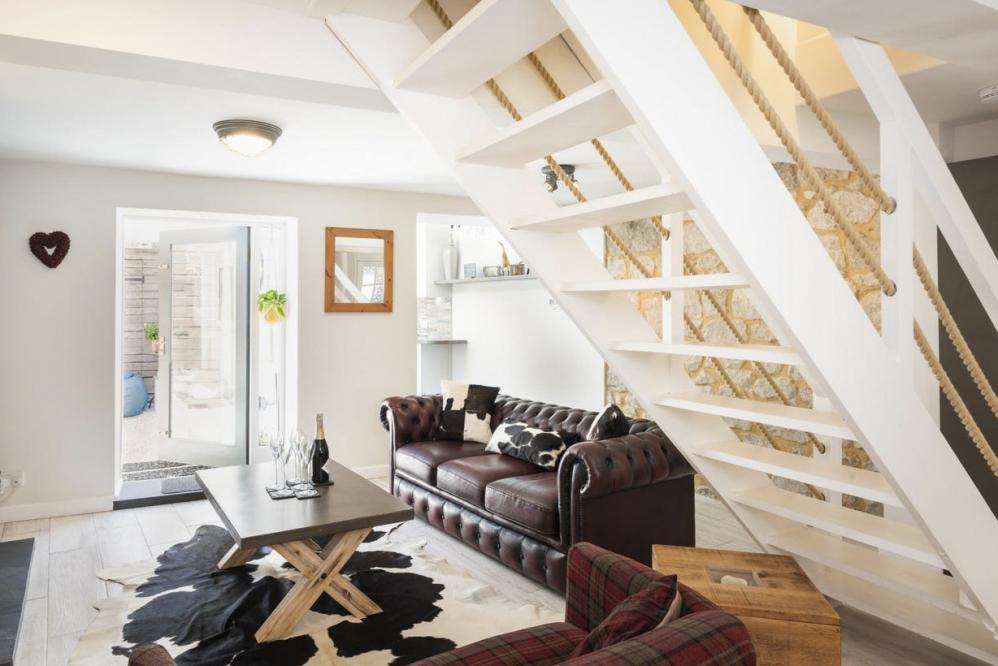 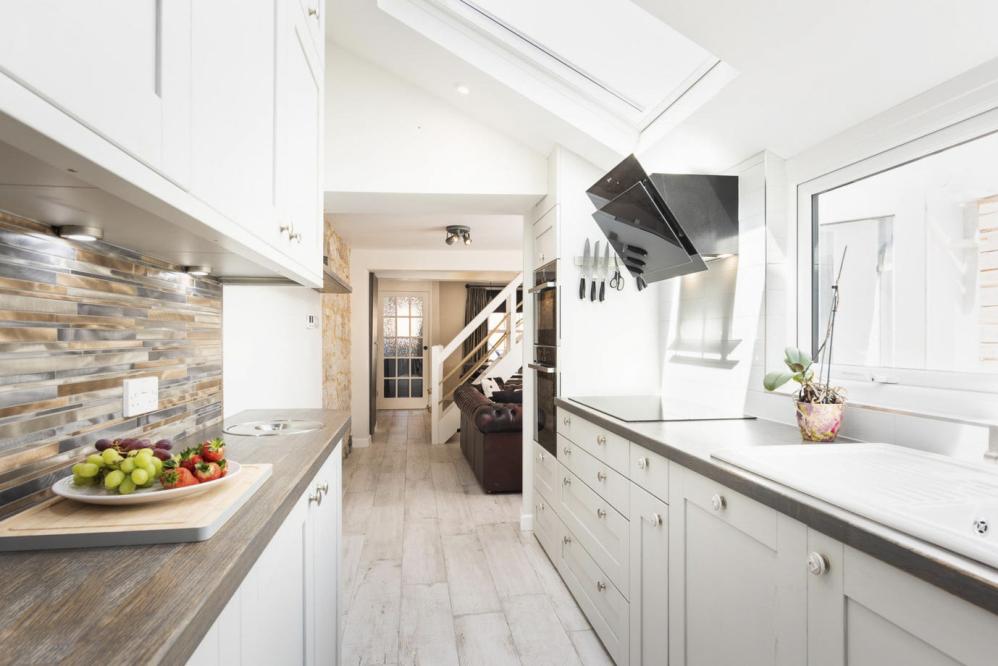 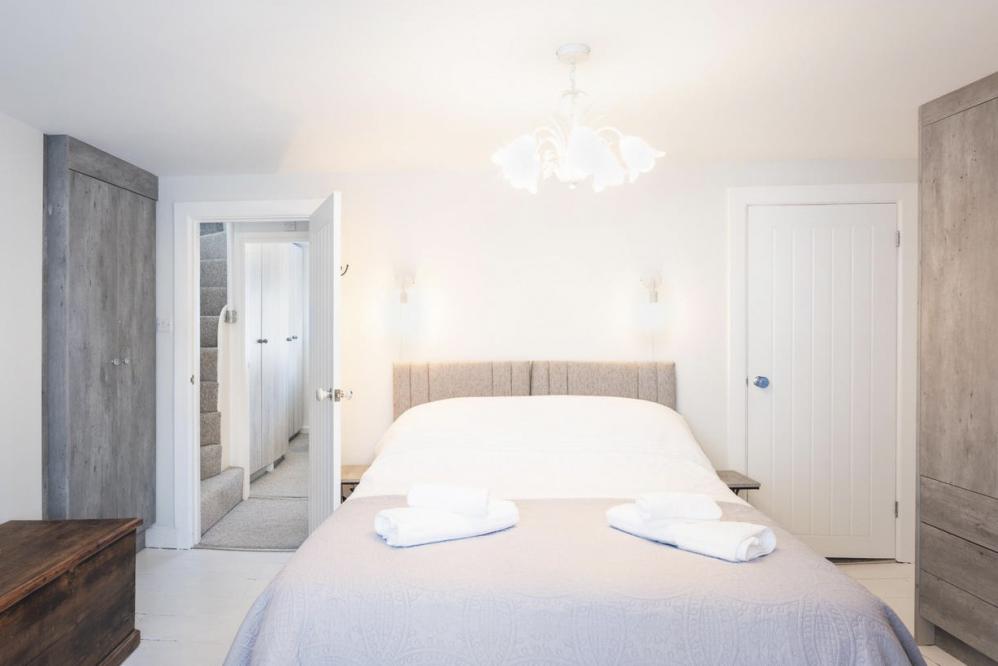 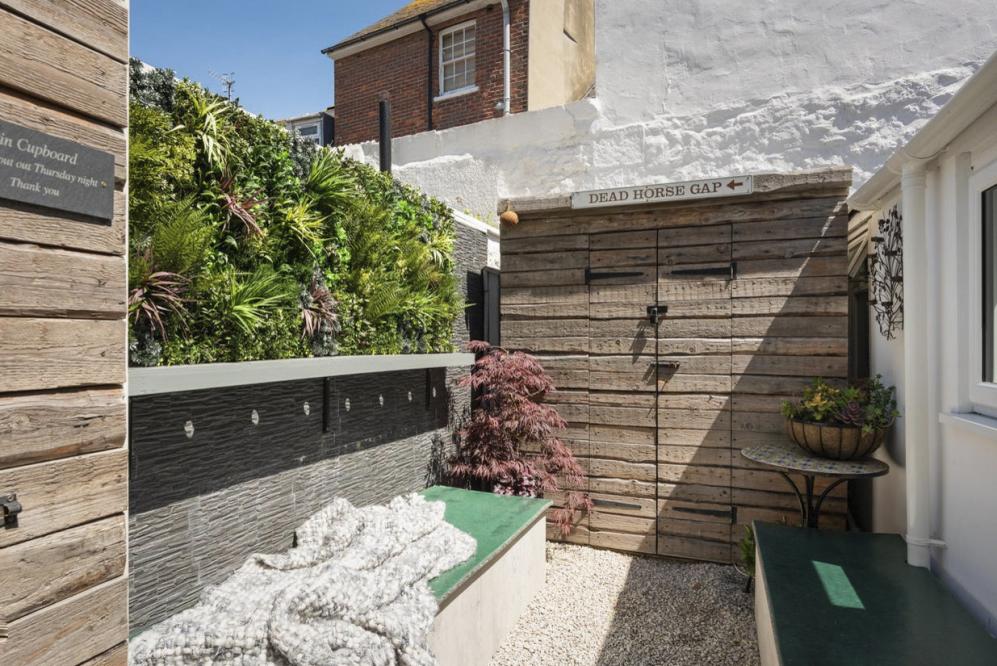 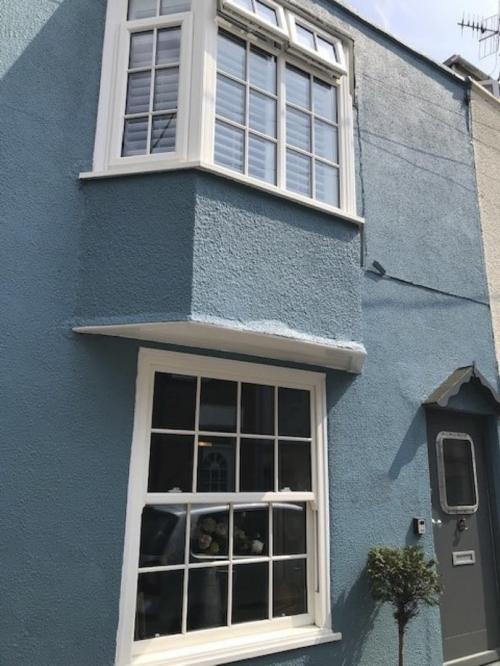 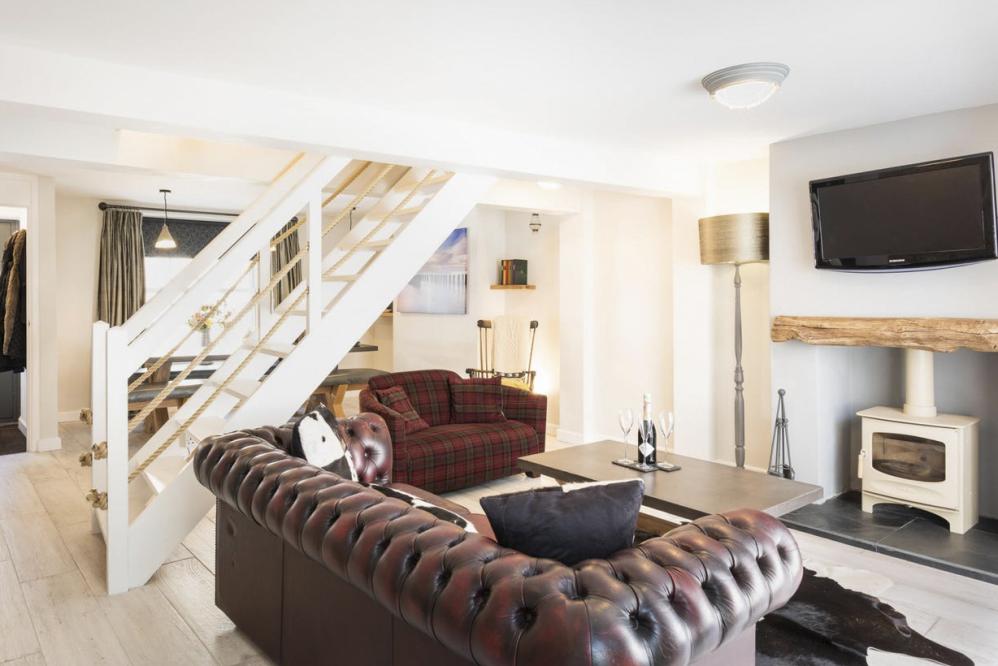 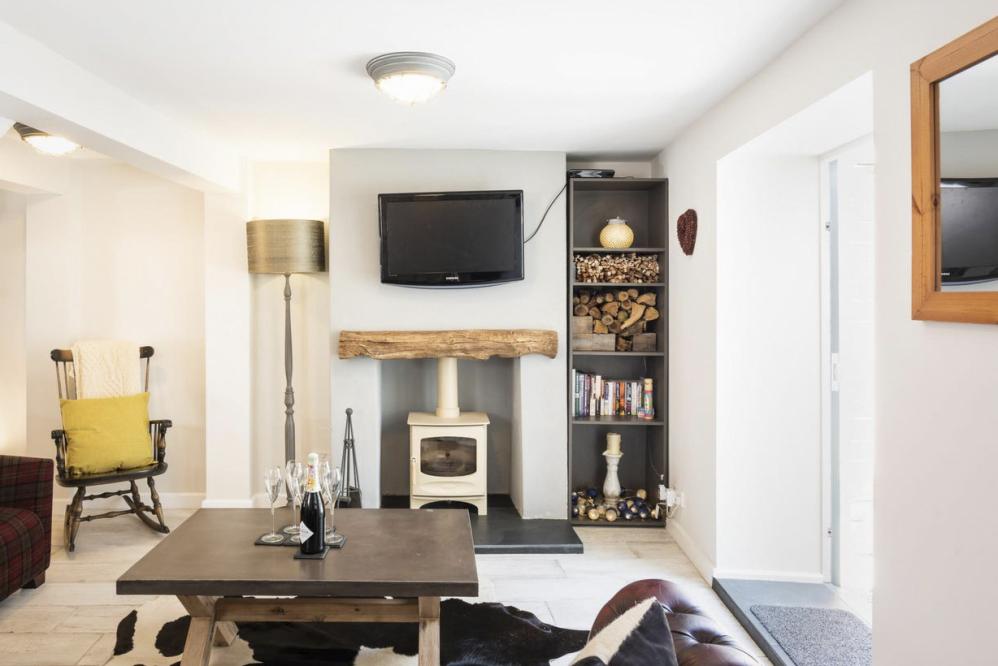 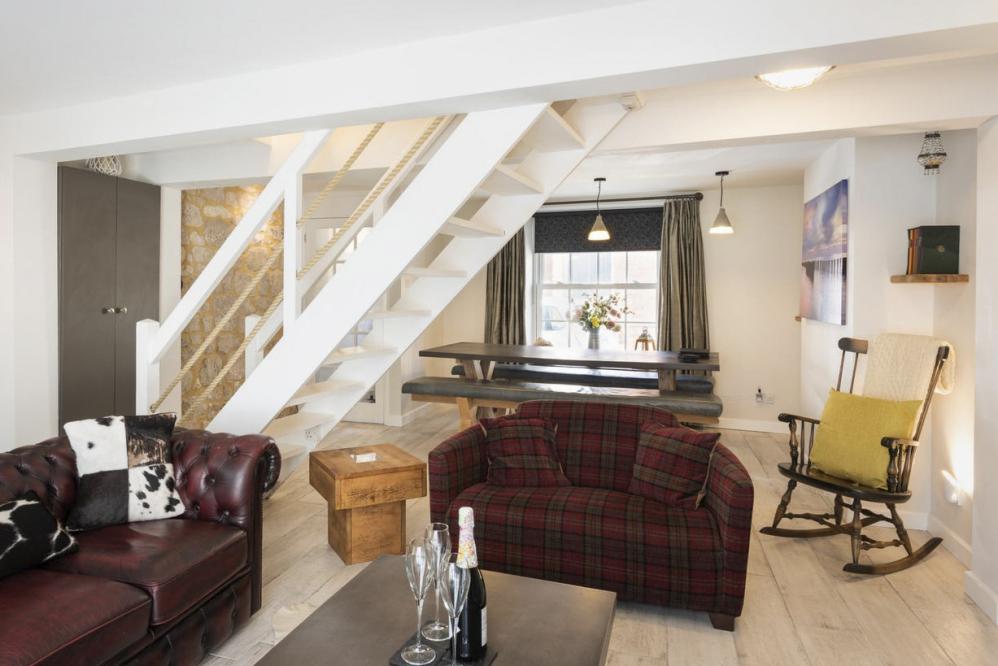 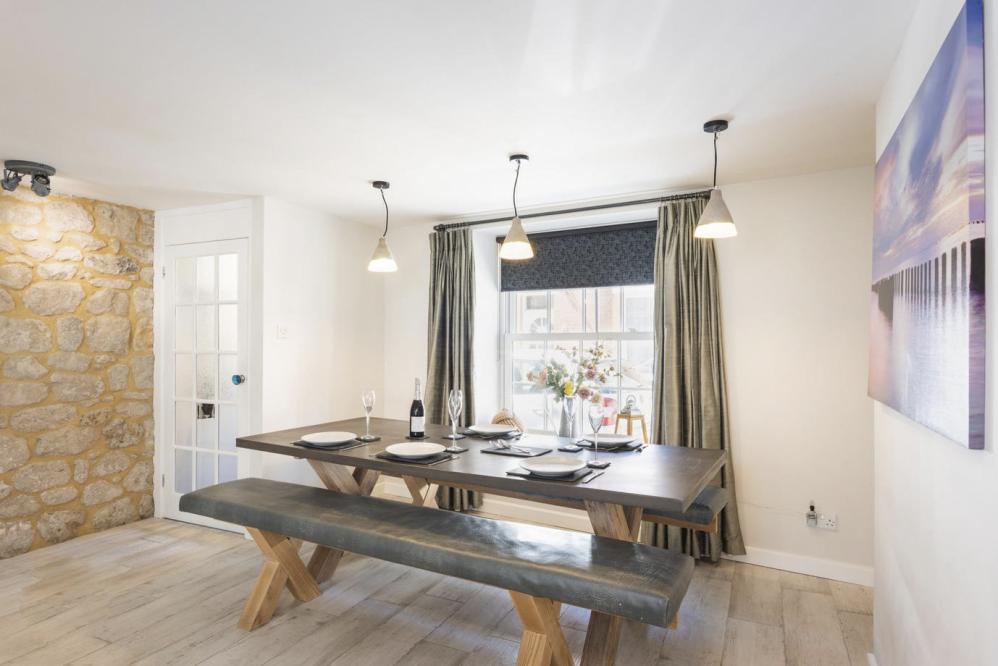 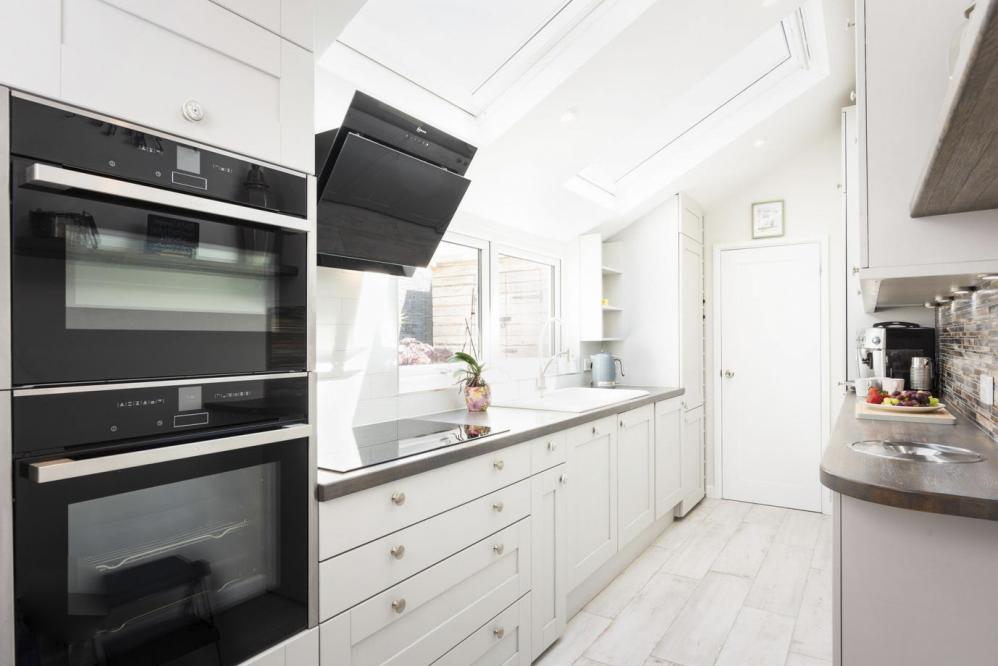 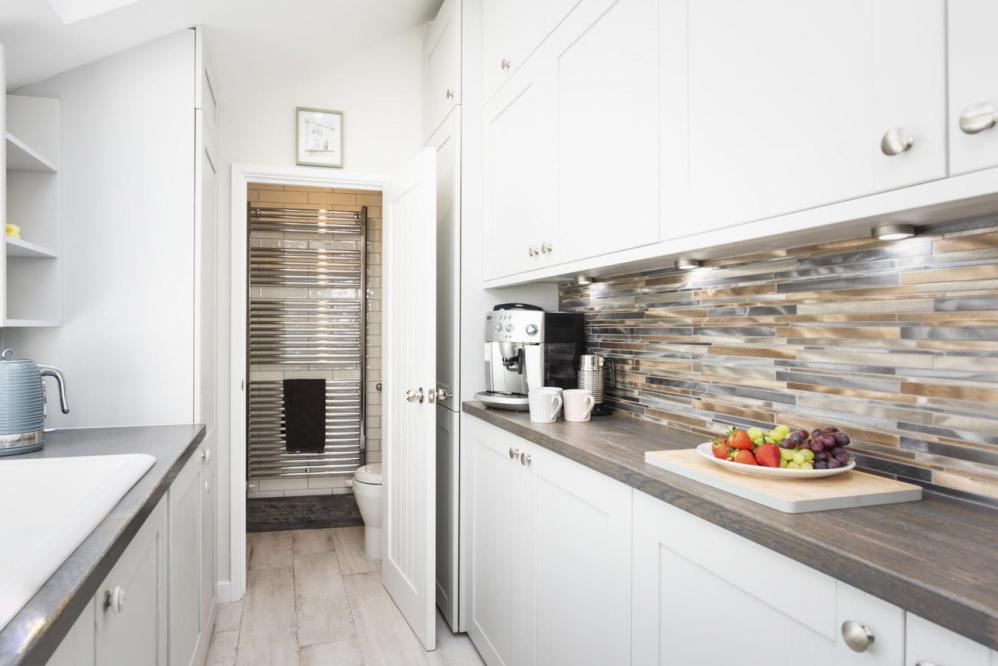 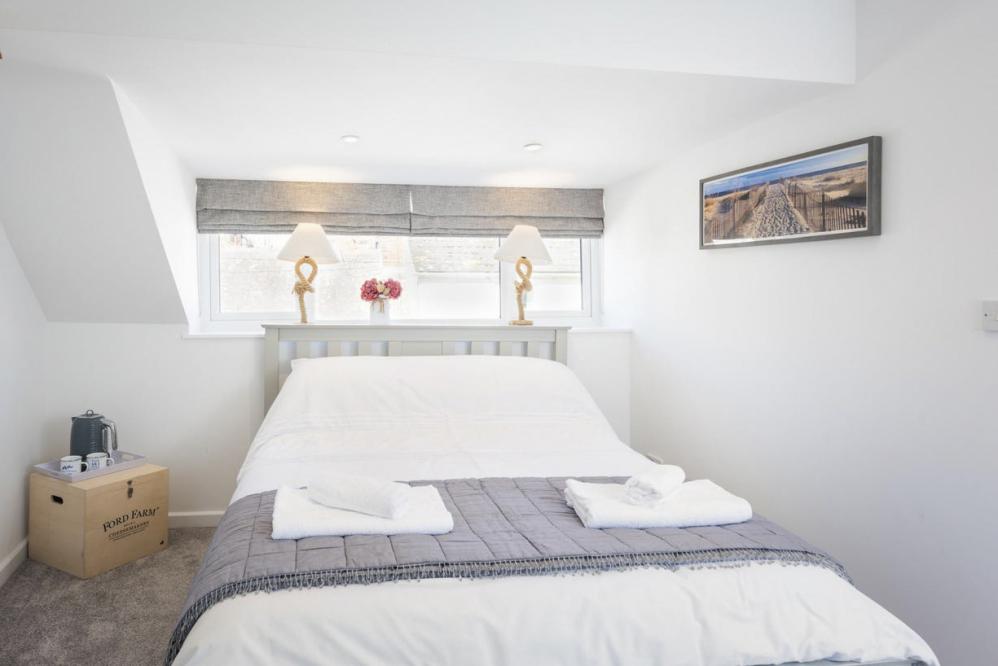 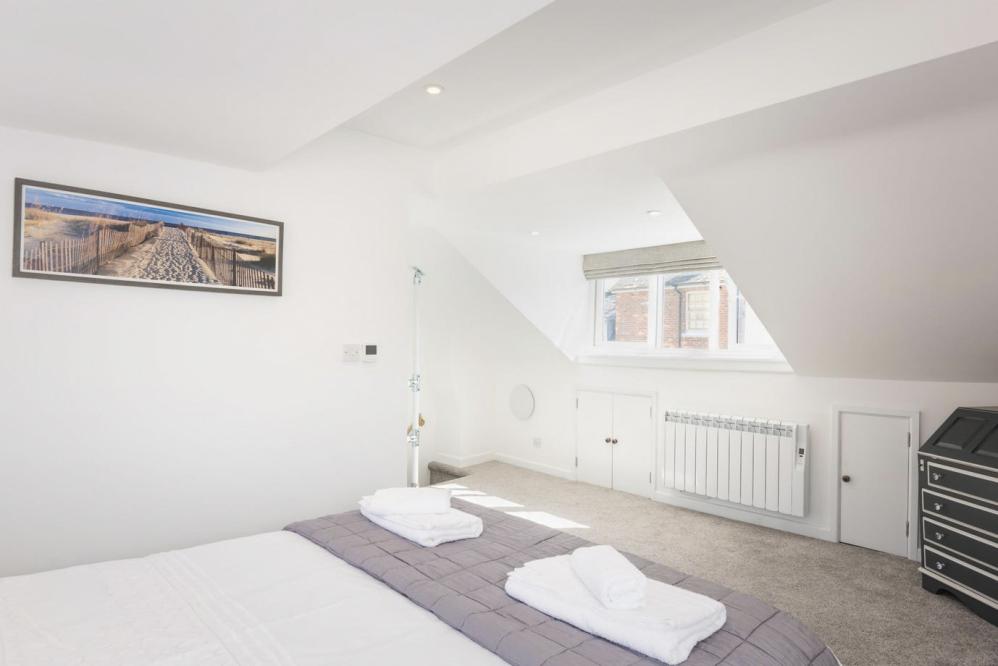 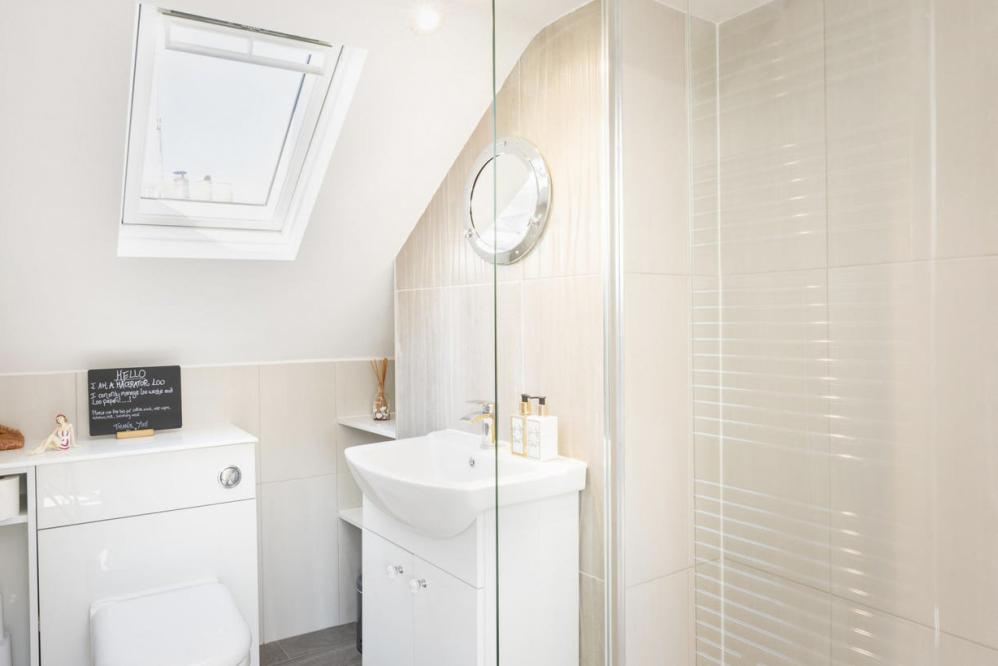 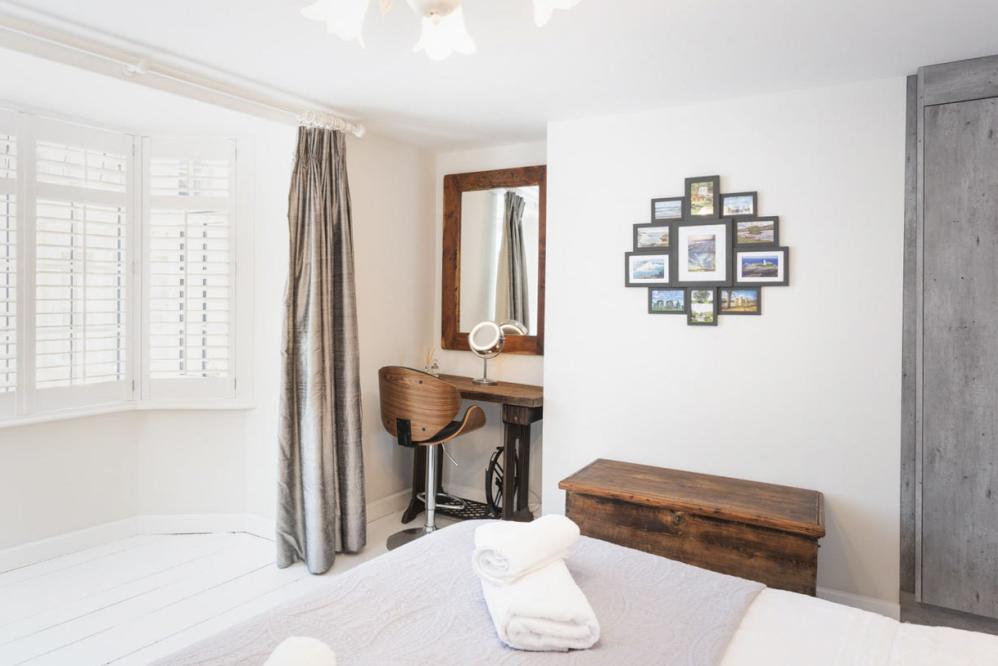 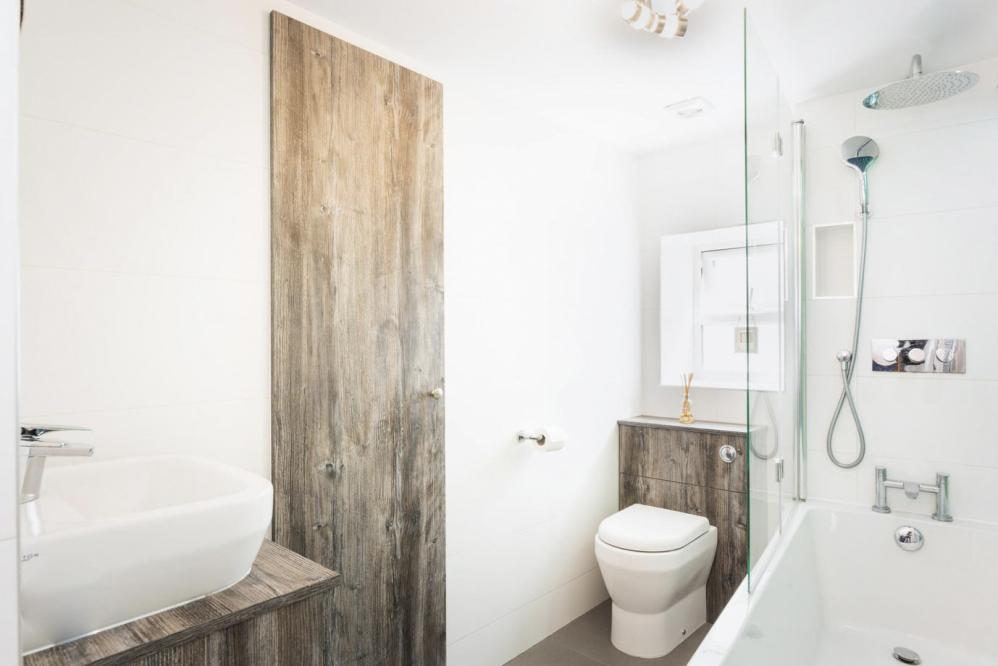 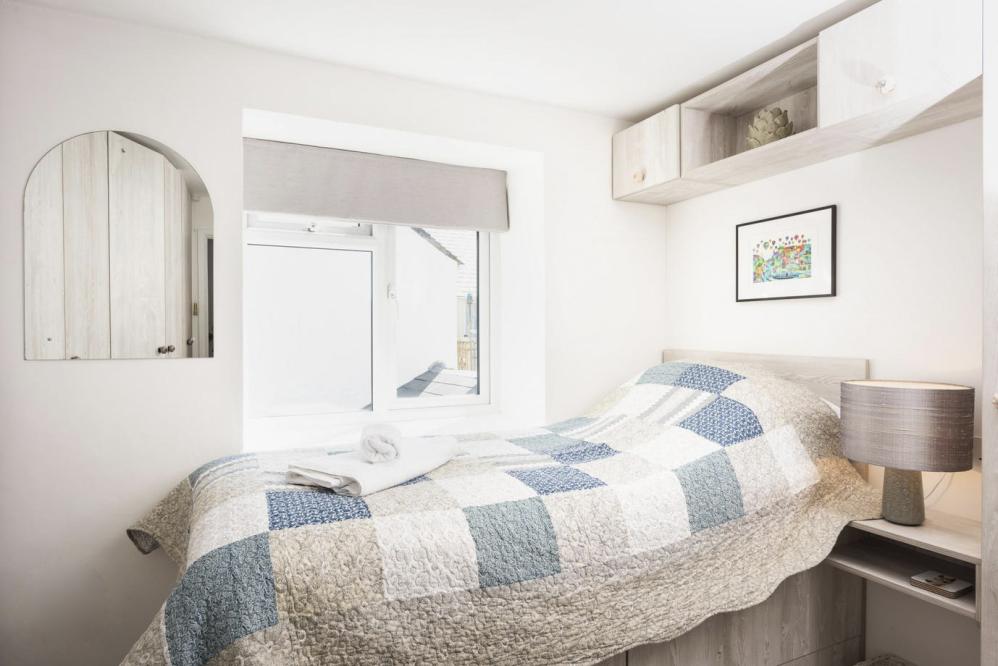 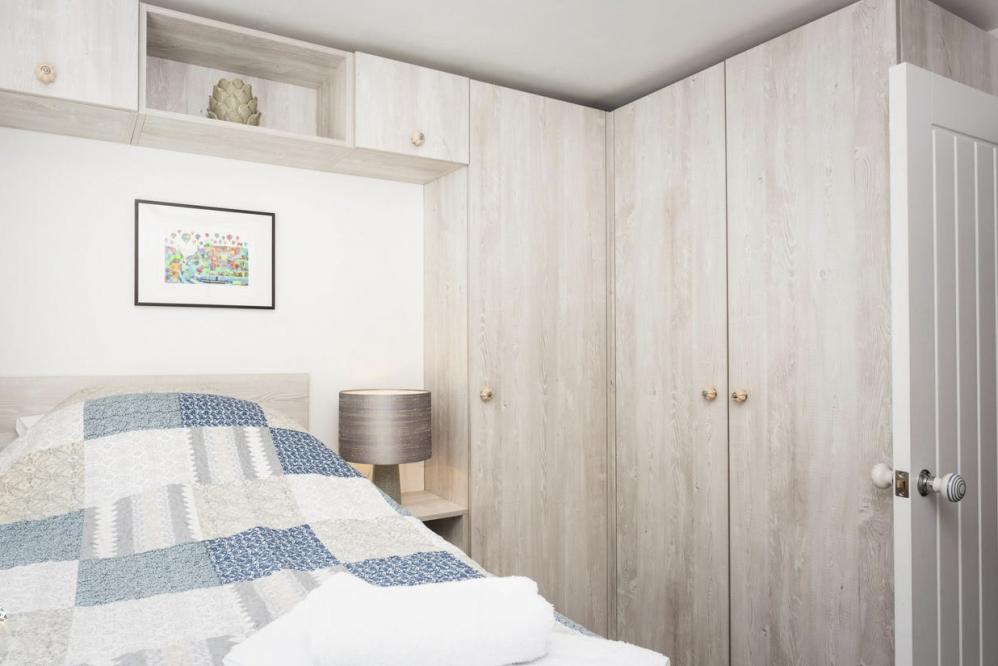 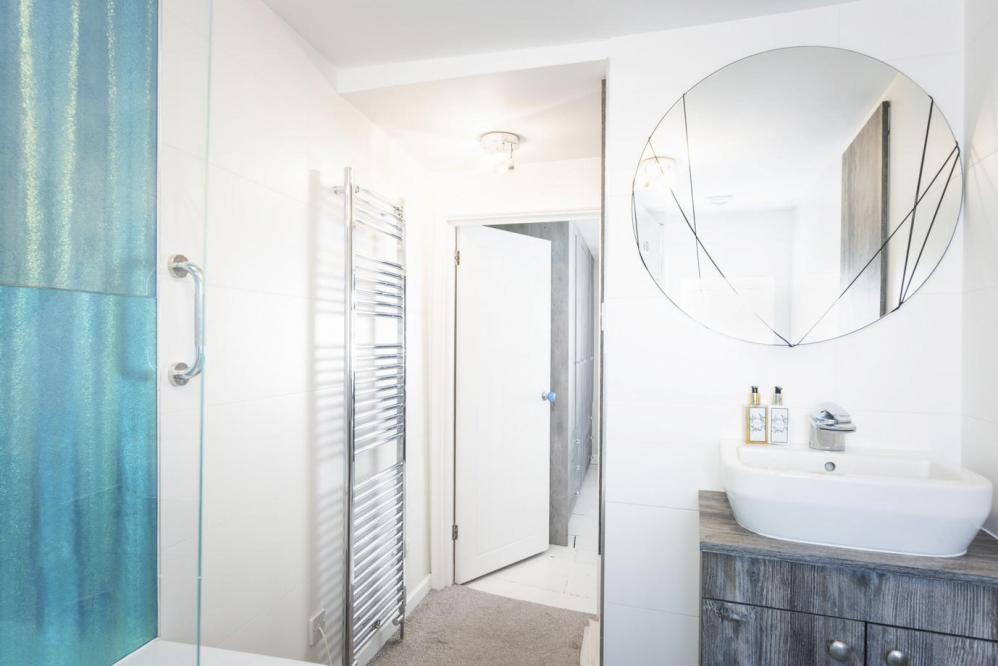 Formerly a bookshop, the charming Rodwell Cottage sits moments from the harbourside in Weymouth, Dorset. With room for up to five guests, this cottage packs a l...

Read more
Modern All Bedrooms En-Suite Not for little ones

Formerly a bookshop, the charming Rodwell Cottage sits moments from the harbourside in Weymouth, Dorset. With room for up to five guests, this cottage packs a lot in over its three floors and offers outdoor space in the form of a private courtyard with seating.

You have an open-plan living area on the ground floor which incorporates a cosy lounge space with access to the courtyard. With a wall-mounted TV, Chesterfield-style sofa and wood burner, you are sure to feel at home here. Your kitchen and dining area are right there too, featuring a fridge freezer, washing machine and two eye-level ovens.

The kitchen is a pleasure to use, with skylights letting the natural light in, and the dining space keeps things casual with bench seating. A large bay window and bare stone wall create points of interest in this attractive space.

Rodwell Cottage has three bedrooms, including two with king-size beds. One of these can be converted to twin beds if required. The loft bedroom on the second floor has an en suite shower room of its own, while the two on the first floor (the master bedroom and one room with a single bed) both have direct access to a family bathroom with bath and overhead shower. There is also a WC on the ground floor.

This cottage is ideal for exploring Weymouth’s beautiful harbourside. You can enjoy boat trips from the harbour or settle down in one of the many pubs or coffee shops found in the area. Newton’s Cove, a shallow water beach, is also close by.

Weymouth’s golden sands are just one of the attractions of this Dorset town on the Jurassic Coast, with many lovely walks to be had on the Rodwell Trail to Portland or the Radipole Lake Nature Reserve. You can also visit the SEA LIFE Adventure Park, pretty Bennetts Water Gardens or local highlight, Nothe Fort.

A seaside favourite in one of the UK’s most scenic counties, Weymouth has plenty going on. Its gol...

A seaside favourite in one of the UK’s most scenic counties, Weymouth has plenty going on. Its golden sand beach is the centrepiece, with the Esplanade running alongside it – offering ice creams, cafés, deckchairs and the like – forming part of the extensive South West Coast Path.

The harbour and marina lie close to the beach and all sorts of boat tours are available to let you see the Jurassic Coast in all its glory. Another beach rivals Weymouth’s for iconic status – the 18-mile Chesil Beach is not far away, running all the way from West Bay to Portland. It’s a pebble beach that’s all about the views and the atmosphere – described by author John Fowles as ‘an elemental place, made of sea, shingle and sky’. The view of Chesil Beach from the coast road has, in fact, been voted one of Britain’s best.

Perhaps Weymouth’s biggest attraction, aside from the beaches, is the mighty Nothe Fort. Featuring a maze of underground passages and panoramic sea views, this historic fort is a favourite with visitors and hosts all kinds of events – even weddings. It’s supposedly haunted too, if ghost-hunting is your thing.

At Bennetts Water Gardens you can enjoy eight acres of tranquil lakes, with a Monet-style arrangement of more than 140 types of lilies one of the highlights. The gardens are inhabited by a wide variety of wildlife, and at the end of your visit you can also view a museum of local history.

An incredible underwater world awaits you at Weymouth’s SEA LIFE Adventure Park. There are almost 2000 creatures at this centre, including Europe’s only colony of fairy penguins. With its Ocean Tunnel and Caribbean Cove play area, this place is a good choice for a day out with kids.

Bird watchers will enjoy the tranquil Radipole Lake Nature Reserve, where even beginners can try to spot finches, bitterns, sparrows, robins and others. There is also plenty of wildlife to be found along the Rodwell Trail. This former railway line has been transformed into a 3.4km route which is ideal for cycling or walking, taking you past old station platforms and Sandsfoot Castle, a fort built by Henry VIII.

For an even more extensive cycling route, try the Portland Trail. At 27km long, this route takes you through Lodmore Country Park, then Weymouth town centre and eventually on to the Isle of Portland. This wild and rugged spot marks the southernmost point on the Jurassic Coast and is joined to the mainland by Chesil Beach. The isle packs in a surprising amount, with museums, castles, lots of restaurants and the famous Portland Bill Lighthouse waiting for you.

Please note: Due to steep wooden stairs, this property is not suitable for young children or infants...

Please note: Due to steep wooden stairs, this property is not suitable for young children or infants.

There is great stuff for kids all over Weymouth and beyond. As well as the sandy Weymouth Beach, you might also like to visit SandWorld. This sand sculpture park features great works all made entirely from sand and water, and there’s a sandpit where young children can have a go at sculpting themselves.

The amazing Nothe Fort has lots going on for kids too, including the mouse hunt where they can try to spot the mice as you go around the fort. There is also a café and picnic areas on the ramparts, and they are sure to love exploring the underground tunnels and secret passages.

The SEA LIFE Adventure Centre is one of the town’s family highlights. Offering a mixture of learning and fun, this centre hosts hundreds of aquatic species, from sharks and seahorses to the magnificent fairy penguins. There is also an adventure play area with water slides. You will find this centre close to the RSPB nature reserve of Lodmore, the ideal place to go and watch the wildlife or enjoy a walk together.
Weymouth Museum on Brewers Quay lets kids learn all about pirates, shipwrecks and more stories from Dorset’s past. If they can’t get enough of the pirate theme, it continues at Pirate Adventure Mini Golf, part of the SEA LIFE Adventure Centre.
For theme park-style thrills, try the Fantasy Island Fun Park. With something for all ages, including fairground favourites like a ghost train and helter-skelter, this park also has a soft-play area and indoor arcade. For more soft play and a whole lot more, check out Fun Factory, a massive indoor playground with a separate toddler zone. In summer, the fun continues outside with zip-wires and a bouncy castle – it will sure burn off a lot of energy.

Rainy day? You can challenge each other on the ten-pin bowling lanes of MFA Bowl, which offers video games, pool tables and family dining too. If there’s a movie you want to see, you can grab some popcorn and choose from nine screens at Weymouth’s town centre Cineplex.

Something you can all enjoy together is a trip to the Isle of Portland. It’s here that you’ll find the mighty Portland Castle which offers audio tours and a child-friendly discovery pack to help them get the most out of the experience. With stunning sea views and great beaches nearby, as well as the Portland Bill Lighthouse, it’s well worth making the short journey from Weymouth to discover this stunning isle. 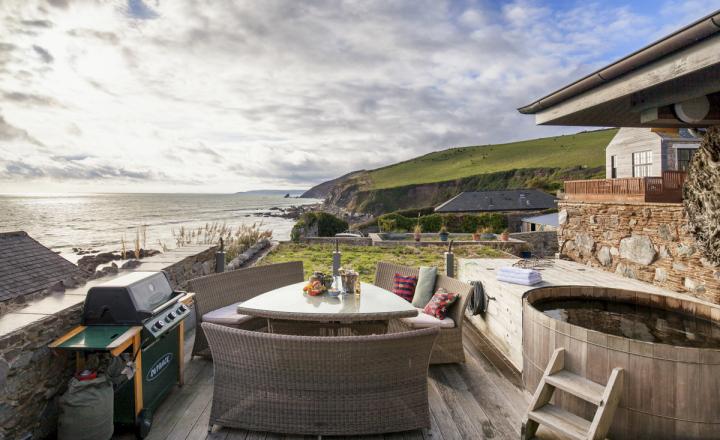 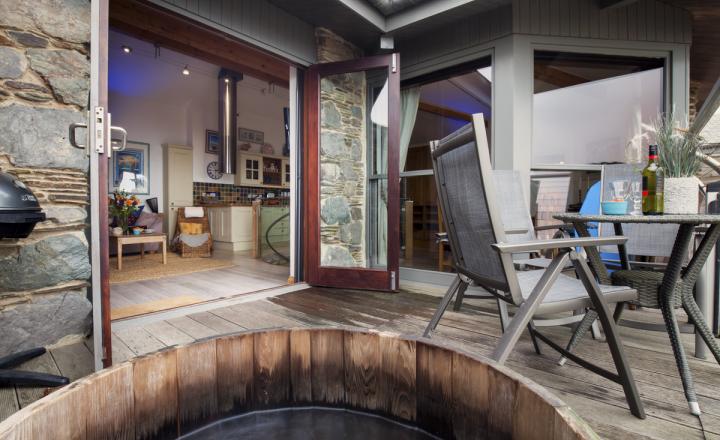 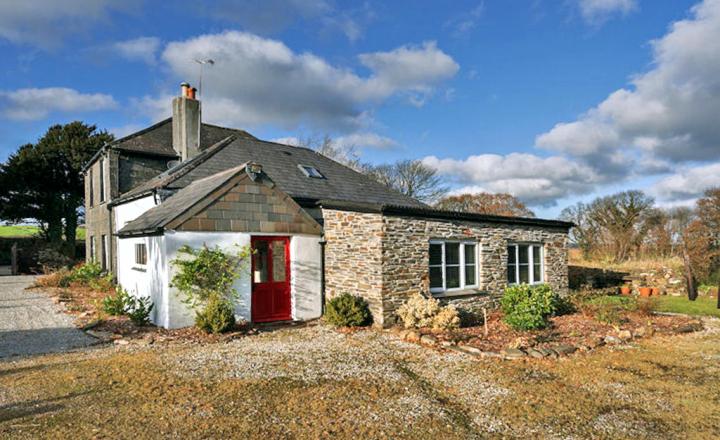 Ask a question about Rodwell Cottage