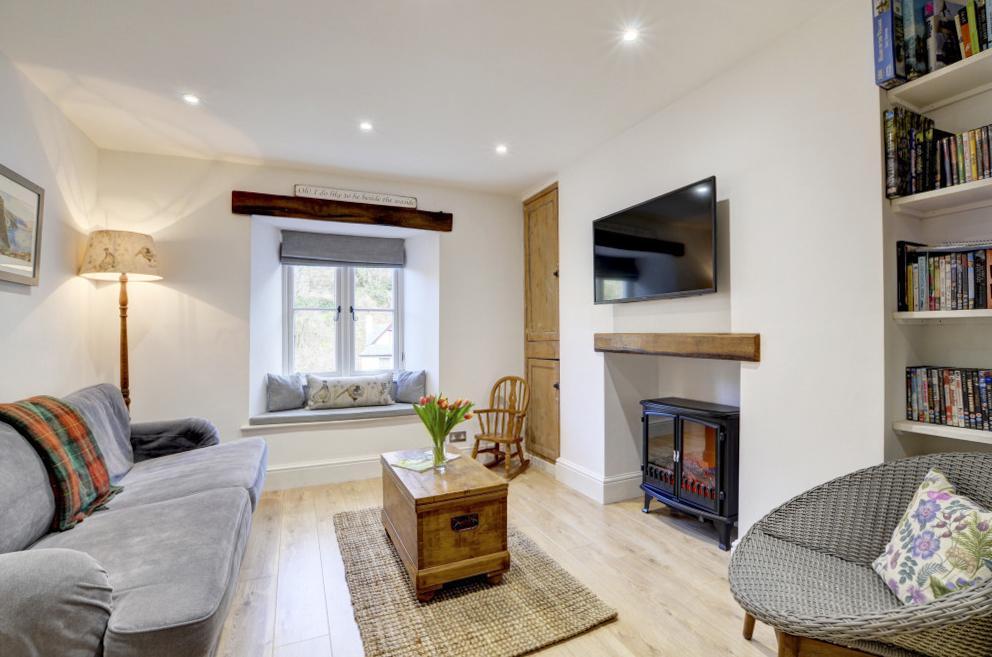 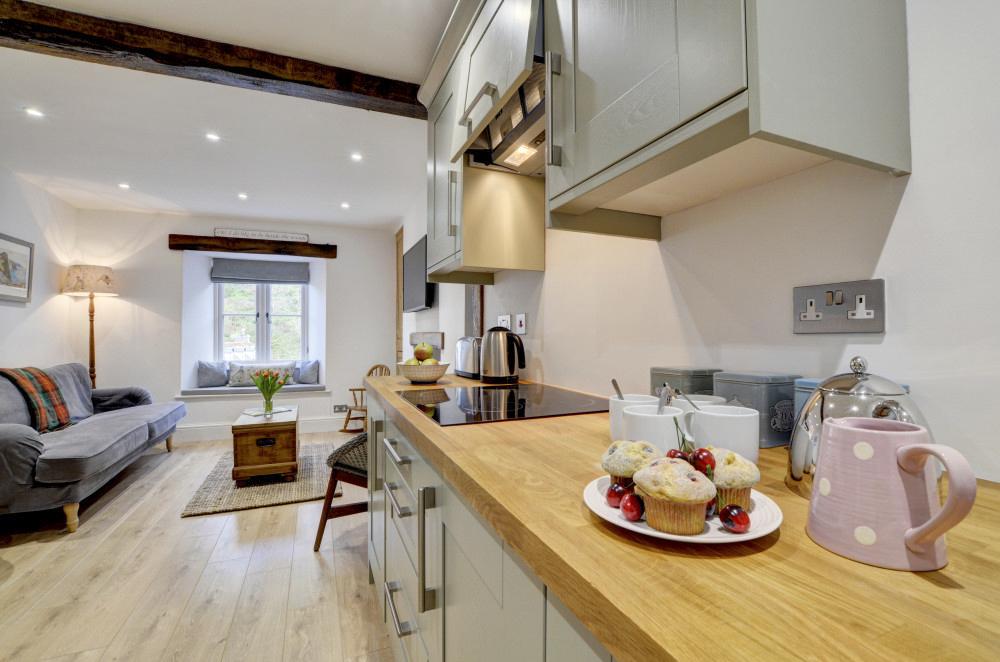 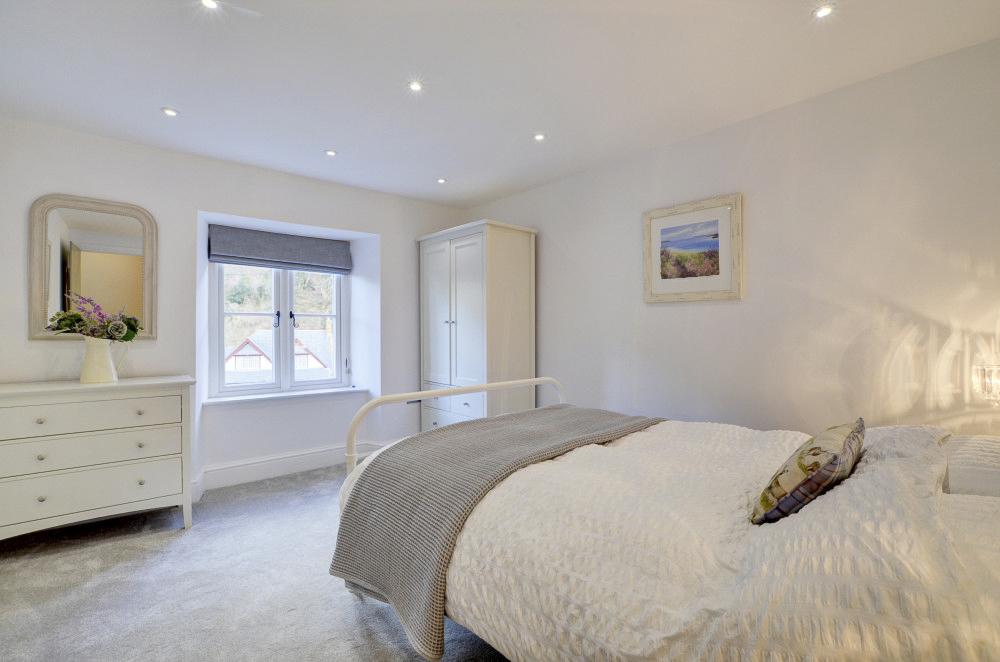 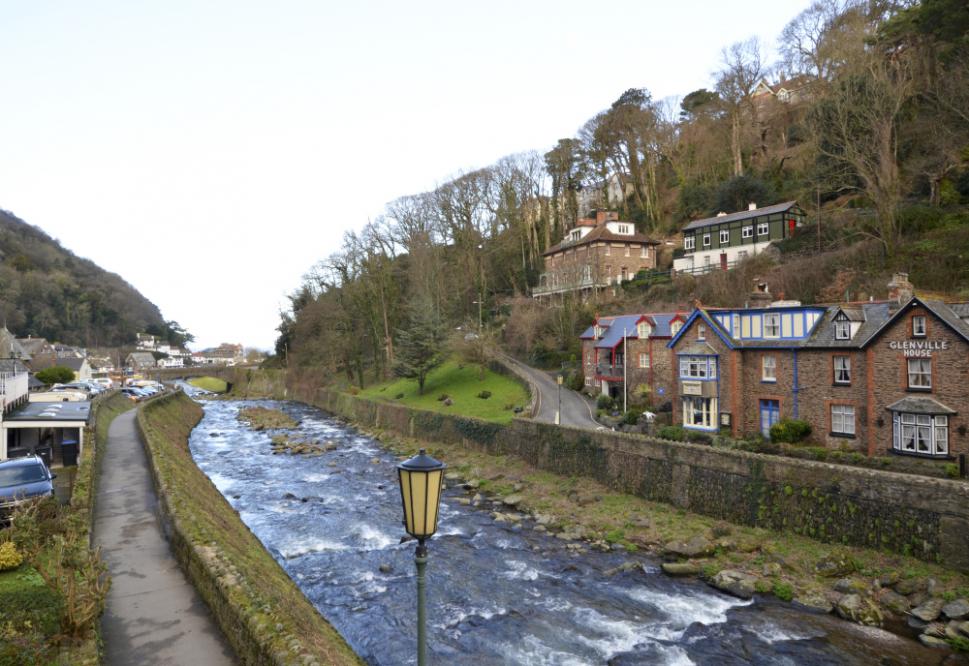 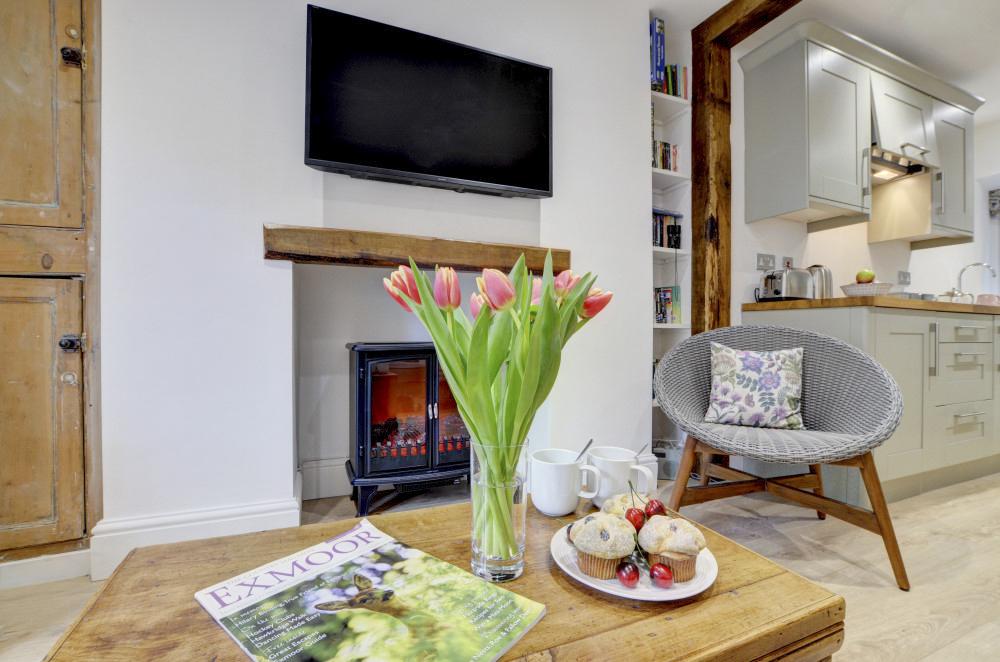 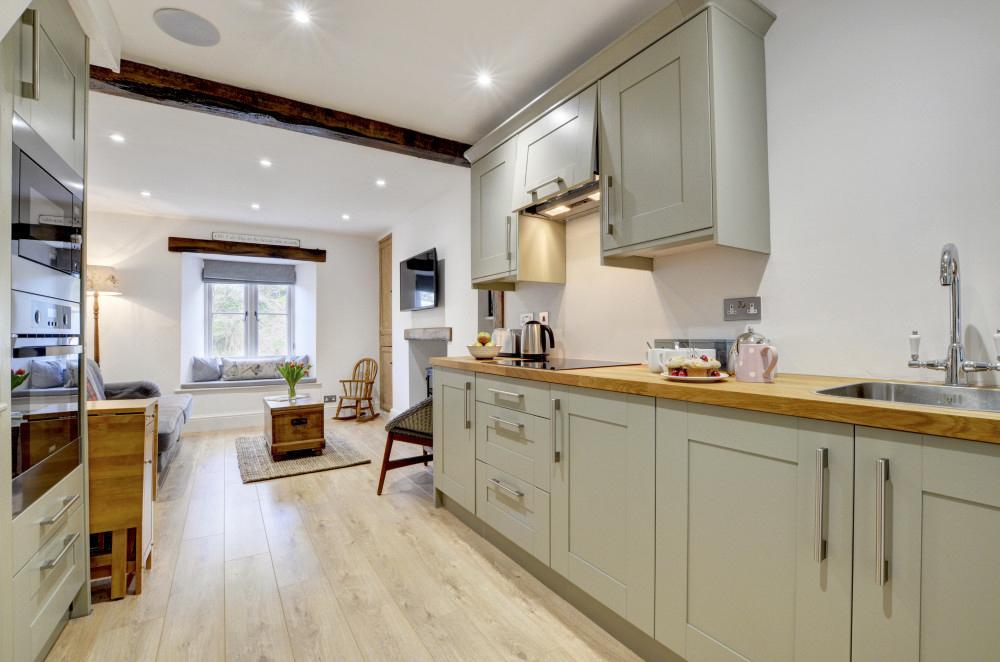 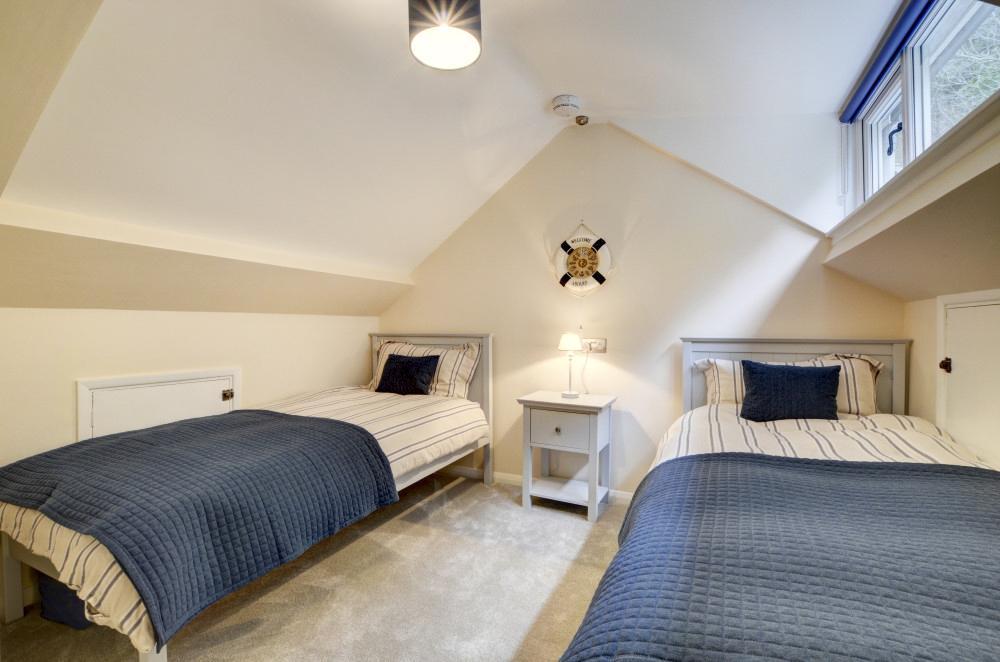 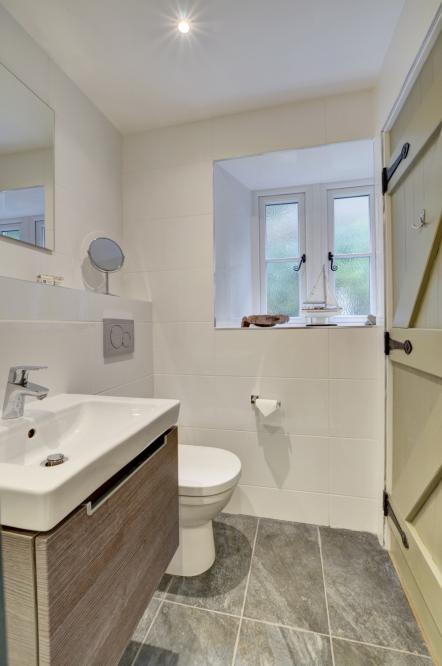 Cosy and welcoming, Exmoor Cottage sits in a beautiful and dramatic location in the picturesque village of Lynmouth on the Exmoor coast. Overlooking the river b...

Cosy and welcoming, Exmoor Cottage sits in a beautiful and dramatic location in the picturesque village of Lynmouth on the Exmoor coast. Overlooking the river below and within easy walking distance of the beach and the local pub, it is the perfect spot for a romantic getaway or a family break in this stunning part of Devon.

Inside this traditional cottage is immaculate and characterful, having been tastefully renovated to a high standard and with great attention to detail throughout. The lovely open-plan living space is light and welcoming. Guests can enjoy rustling up some delicious meals in the attractive and well-equipped kitchen, painted in soft muted colours, before retiring to the comfortable lounge to relax on the large comfy sofa. Families can enjoy sitting back and watching a film together on the large flat-screen TV, or couples may just like to cosy up with a glass of wine in front of the fire. The pretty window seat is a lovely spot to sit with a morning coffee and enjoy the view of the river rushing through the gorge below as it heads into the sea beyond.

Heading up to the first floor, guests will find the lovely double bedroom, elegantly decorated in soft creams and greys and with a view of the river outside. The adjacent contemporary bathroom has a stylish walk-in shower, handbasin and WC. Up a second flight of fairly steep steps brings guests to the delightful twin bedroom in the converted attic – a delightful den for two children, jauntily decorated in a fresh seaside colours.

Exmoor Cottage is a charming and characterful holiday cottage, ideal for a family break on the north Devon coast. Within easy reach of several glorious beaches as well as the breathtaking beauty of Exmoor National Park, it is an immaculate and tastefully designed property that will ensure a relaxing break.

*Please note that there is no private garden at Exmoor Cottage.

Lymouth sits in a gorge at the meeting point of the East and West Lyn Rivers as they flow into the s...

Lymouth sits in a gorge at the meeting point of the East and West Lyn Rivers as they flow into the sea on the north coast of spectacular Exmoor National Park. Midway between Ilfracombe and Minehead, the village sits on a beautiful stretch of coastline, backed by the lush woodland and the rolling, heather-clad hills of Exmoor. Inhabited since Mesolithic times, the area has archaeological evidence indicating both Roman and Norman settlements. It has been extensively mined for iron for hundreds of years and has always been used for agriculture. Today, visitors come to walk and enjoy the beautiful countryside, dotted with picturesque villages, and to enjoy the stunning coastline.

Pretty Lynmouth is a delight, with a beautiful shingle bay backed by spectacular green cliffs, and a charming harbour – the perfect spot for a leisurely pub lunch. At the top of the gorge high above Lynmouth is the village of Lynton. To reach it, guests can take the unique water-powered funicular railway that carries passengers up the steep, 700-foot cliff to the top. Operating since 1888, the railway is a masterpiece of Victorian engineering and one of only three completely water-powered funiculars in the world. Take in the fabulous views of Lynmouth’s sweeping bay on the way up before enjoying a cream tea in the clifftop café at the top. Take a stroll around Lynton’s pretty cobbled streets and explore the array of interesting and quirky galleries, craft and gift shops. Don’t miss Lynton’s Town Hall – an impressive building in an unusual mix of architectural styles – part mock Tudor, part mock-Gothic – which was opened by Sir Arthur Conan Doyle in 1800.

Beyond the village, the stunning countryside awaits those who love walking. Known as England’s Little Switzerland, the nickname is well-suited to this region of almost alpine-like hills that surrounds Lynmouth and Lynton. Head to Watersmeet, the National Trust property just outside the village, where the East Lyn River and Hoar Oak Water meet in a dramatic and spectacular gorge. Walk the path that follows the river through beautiful ancient woodlands and admire the cascading waterfalls before enjoying a cup of tea in the picturesque Watersmeet House café.

Younger visitors will love Exmoor Cottage, not just for its quaint appeal and their own loft bedroom...

Younger visitors will love Exmoor Cottage, not just for its quaint appeal and their own loft bedroom, but for its appealing location in a stunning natural environment. The short walk to the local beach is just as exciting as the destination itself, along the gorge with the river rushing past the path. The fine shingle beach will keep little ones happy with a spade, and at low tide, a myriad rockpools await so make sure you pack your net and bucket to go crab hunting.

Lovely sandy stretches of beach can be found at both Woolacombe and Croyde Bay, where there are also opportunities for watersports, from surfing to paddle boarding. The unique Tunnels Beaches of Ilfracombe are intriguing for children. Make your way through the Victorian tunnels, carved through rock, to the beaches, where you will discover a unique tidal pool perfect for safe swimming and fantastic rockpools when the tide goes out. Adventurous youngsters may enjoy the chance to go sea kayaking, also available at Ilfracombe.

Nearby Glen Lyn Gorge will entrance younger guests with its other-worldly beauty of lush woodland and beautiful rocky pools. With its own hydro-electric power station, the gorge is a great place to learn about eco-friendly electricity. The on-site exhibition explains how it works and offers visitors the chance to blast a water cannon across the gorge and experience the power of the water for themselves.

A 25-minute drive will bring you to Combe Martin Wildlife and Dinosaur Park, which offers hours of entertainment for children of all ages. The zoo is home to an exciting range of mammals including lions, meerkats and wolves as well as rainbow-coloured parrots and fascinating giant lizards. Younger ones who know their triceratops from their brontosaurus will love the animatronic dinosaur park and the vast indoor soft play area guarantees fun even on the wettest days.

Ask a question about Exmoor Cottage