Home
News and Press
We couldn’t have had a better start to the new year here at Oliver’s Travels! We’re sending more people than ever on the holidays of their dreams, and we keep growing our portfolio of hand-picked holiday homes in the worlds most inspiring destinations every month. January, February and March have also seen some fabulous coverage of our epic holidays is some of our favourite publications, from old friends to new discoveries. Online and in print, we’re spreading our holiday inspiration across the globe and here is a round-up of some of the highlights.
JANUARY 2019

In January it was announced in the latest print issue of Family Traveller that Oliver’s Travels was the winner of the Best Family Villa Operator category. While these results were announced online earlier in 2018, we were thrilled to see it in the physical magazine as well. 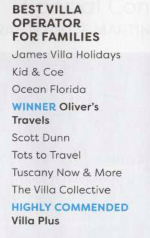 If you spotted The Telegraph’s definitive list of The best 2019 summer holidays for families with primary-school-aged children you would’ve already seen one of our favourite Puglian trulli, Villa Trullo featured on the list. Well deserved, in our opinion (although we might be slightly biased…). 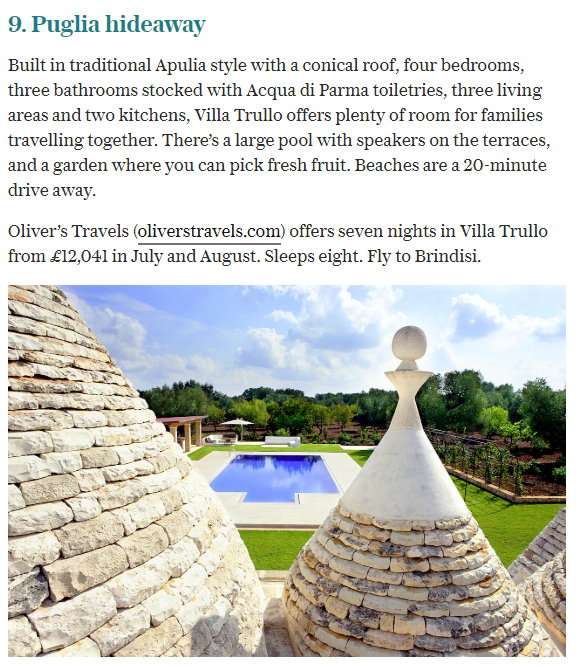 We’ve always been especially proud of our France holidays (that’s where Oliver’s Travels started, after all) so we were over the moon to the Prieure St Therese in the charming Aquitaine featured in The Times as one of their 50 best holidays in France for 2019. 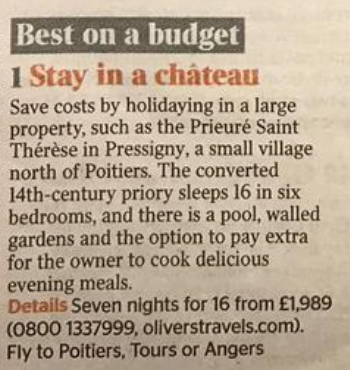 The Mail Online has written up an excellent guide on why Croatia is (almost) the perfect destination for a family getaway and not only one but two lovely Oliver’s Travels villas were featured in the article – the striking Hiza Histria and the gorgeous Villa Florinia. 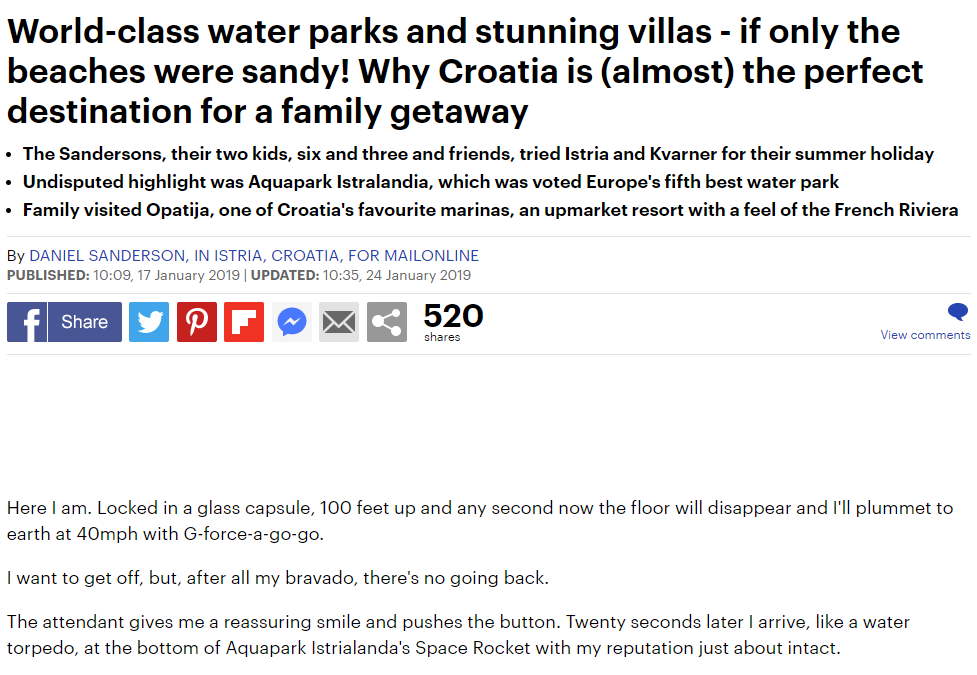 In a fabulous article by The Times detailing the charms of ten of the best villas in Spain, we spotted Villa Bougainvillea, Villa Ander and Villa Rocio. We made sure to count and that’s one, two THREE of our favourite Spanish villas that made the list! 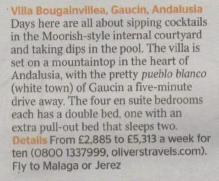 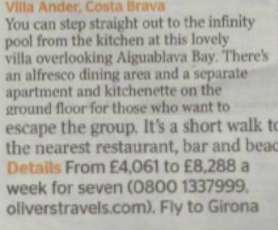 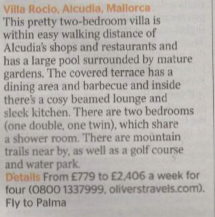 The Guardians returning feature, ‘The Travel Guide Recommends’ have spotted the genius that is our hand-picked villa holidays and it seems he/she/they (who is the travel guide exactly?) just couldn’t resist writing a little bit about it.

The writers over at The Sunday Telegraph were clever enough to treat their readers to a guide on how to book the perfect villa holiday just in time for the upcoming summer season, and Oliver’s Travels made the list of their recommended providers in Europe and beyond.

You Magazine shows of Inglethorpe Hall in a fashion shoot

Mail on Sunday’s fabulous lifestyle imprint, You Magazine, published a recent fashion shoot entitled Man Up featuring the stunning Lucy Coghlan which took place at our very own Inglethorpe Hall in Norfolk – what a backdrop!

Lucy Coghlan writes about Inglethorpe Hall for You Magazine

Following on from her gorgeous fashion shoot at Inglethorpe Hall, Lucy Coghlan wrote a glowing review of the property for You Magazine and Mail on Sunday entitled A different class of holiday rentals with Oliver’s Travels. We’re blown away!

Earlier in the month, Oliver’s Travels released the findings of our research on which foods Brits take on holiday with them, and The Mirror Online seems to have found it just as fascinating as we did and covered the results in a piece on the top comfort foods Brits most commonly pack in their suitcase.

Smiths Castle is one of The Independents best February deals

The Independent know a thing or two about holiday deals, and we loved their online article on the best February holiday deals from skiing in Meribel to safari in Tanzania, not least because it featured our Irish gem, Smiths Castle, as one of the top choices. 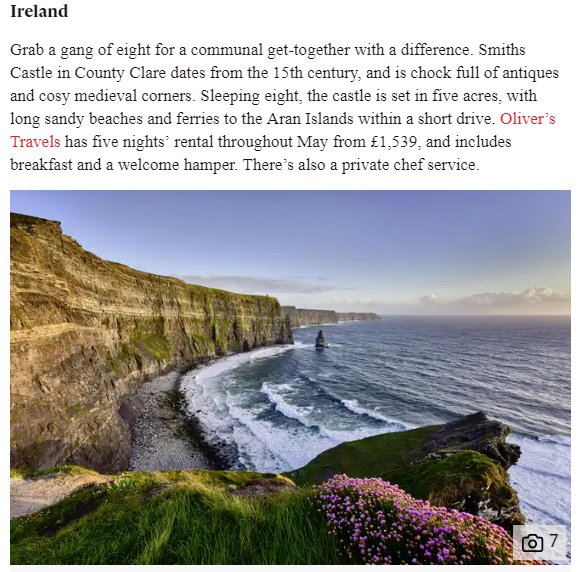 In the past few months, we’ve been busy launching new destination after new destination – and it hasn’t gone unnoticed. Aspire has written a short and sweet piece entitled Oliver’s Travels launches seven new destinations all about our recent growth.

Chasing the sun with The Travel

Not long after we released our ‘Chasing The Sun‘ piece on the blog, the lovely team over at The Travel picked it up for some coverage. The complemented it with some fabulous Instagram images which we can’t get enough of, so make sure to check out their article on Chasing The Sun: Where To Travel During The Year To Catch Some Rays. 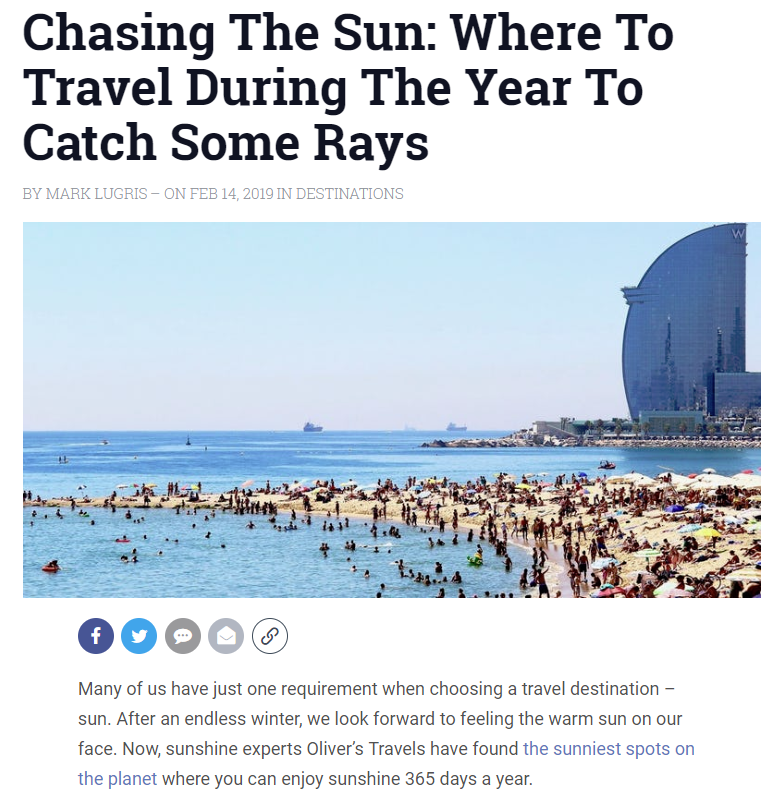 The Times know that beach holidays are nothing without great accommodations, so when they published their list of the 50 best secret beaches in the Mediterranean, they made sure to include ‘rock-star party pad’ Villa Mer et Pierre in their blurb on Plage de Sylvabelle. 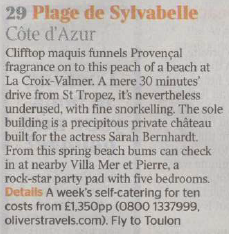 Oliver’s Travels in The Sunday Times piece on holiday cottages

We like to think we know a thing or two about how to have a great holiday right here in the UK, which is why we were honoured to be mentioned and quoted in the Sunday Times’ recent article on the British Cottage Industry.

Villa Acuario is one of The Sunday Times top 50 villas

We love a unique and quirky property like Villa Acuario in Ibiza, and we’re so glad that The Sunday Times agrees that it’s one of the best out there – enough so that they put in on their list of 50 Best Villas! 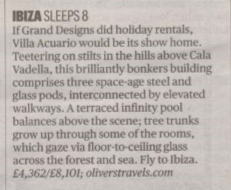 The Mail on Sunday talk all things affordable luxury holidays in their Holiday like a lord…-article, including how to get the full royal treatment at our historical holiday home in Gascony, Chateau Noble. 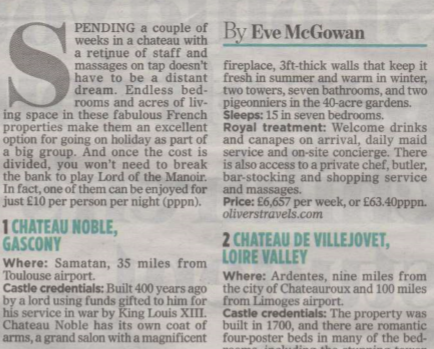 The Mail on Sunday – Oliver’s Travels

Villa Glavica is a dream villa in Time & Leisure

Time & Leisure made a big splash about dream villa holidays for a European odyssey in their Wimbledon, Clapham, Kingston and Surrey imprints which included the ever-dreamy Villa Glavica on the Dalmatian coast. 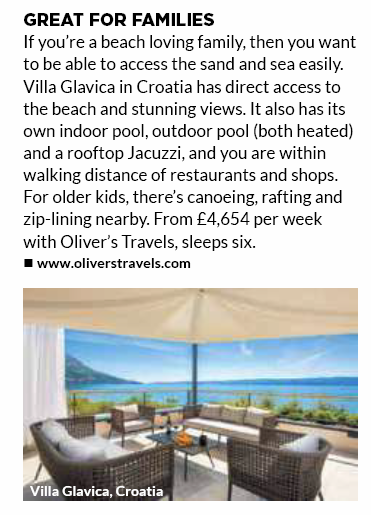 Château Les Tourelles is mentioned in all is fairy-tale, stone-clad glory in The Sunday Times Travel magazine’s recent piece on luxurious family holidays (our speciality, if we may say so ourselves) entitled Lord it up with family.

In a spectacular round-up of Under-The-Radar Festivals You Need To Know About, Elle visited Beat Hotel in Marrakech earlier this year and stayed at Oliver’s Travels Villa Adilah. They also gave the villa a cheeky mention in the article, and we think they summed it up perfectly!

Linton Lodge, Lakeside House, Gorebridge House, Cameron North Lodge and Napoleonic Fortress have been names Menswear Style’s Top 5 party houses to rent in the UK. Could there have been a better selection? We think not! 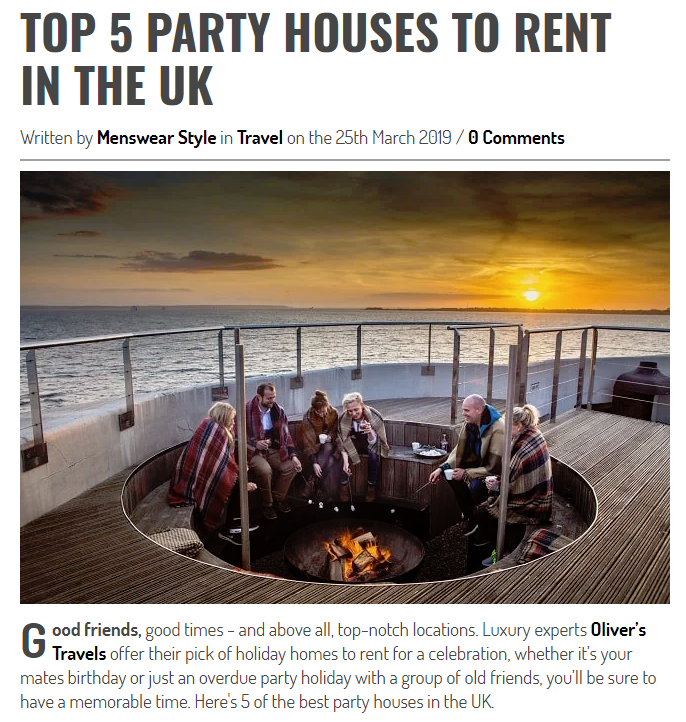 The Independent answered the question Where to go on holiday in April and beyond by recommending a host of fabulous locations, including Italy for July and the stunning Chiesa Amaro (not that it’s not incredible any time of year). 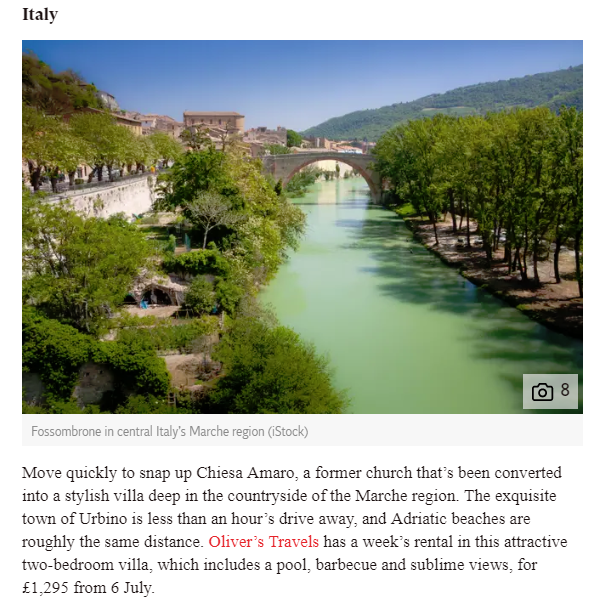